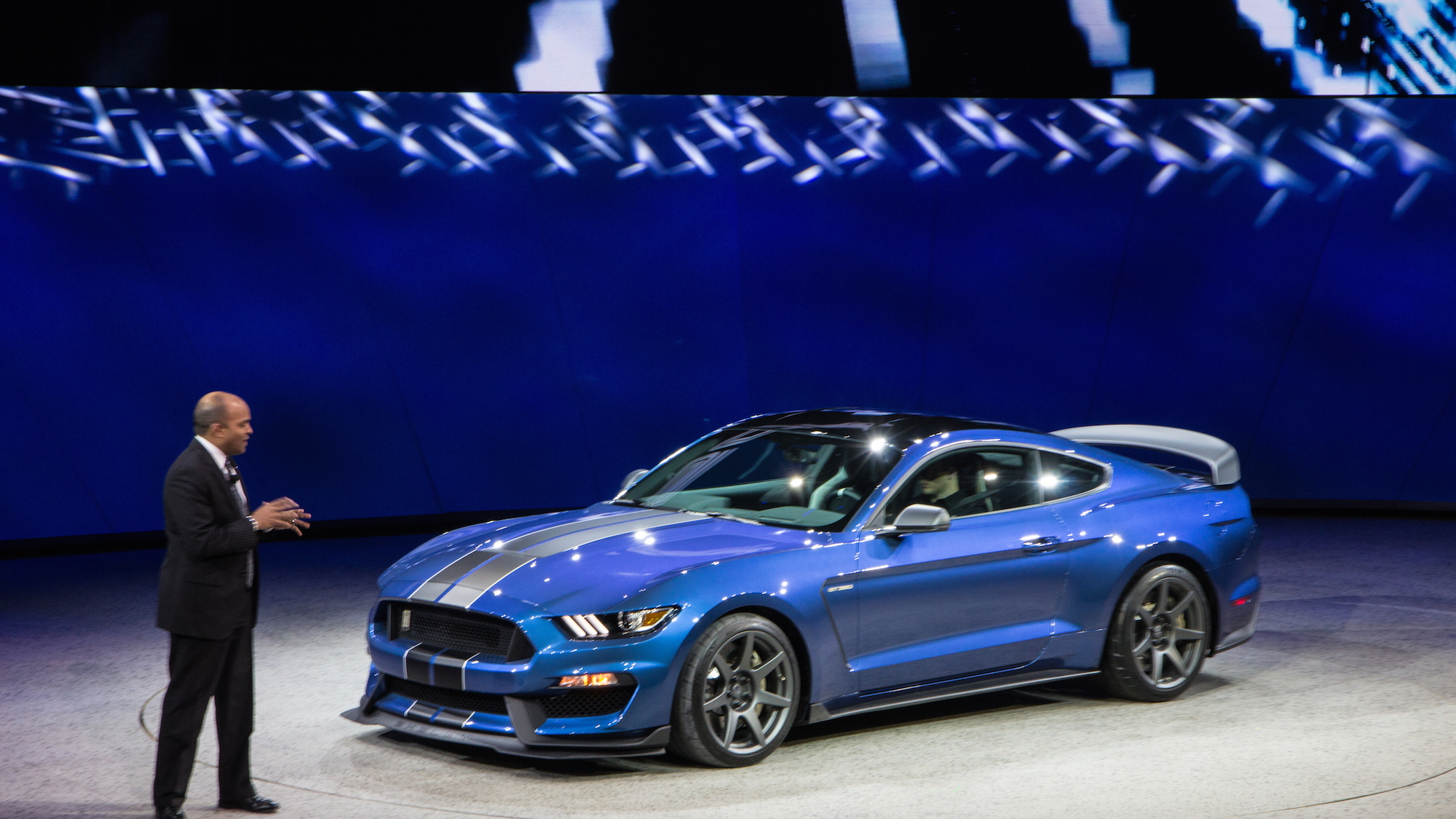 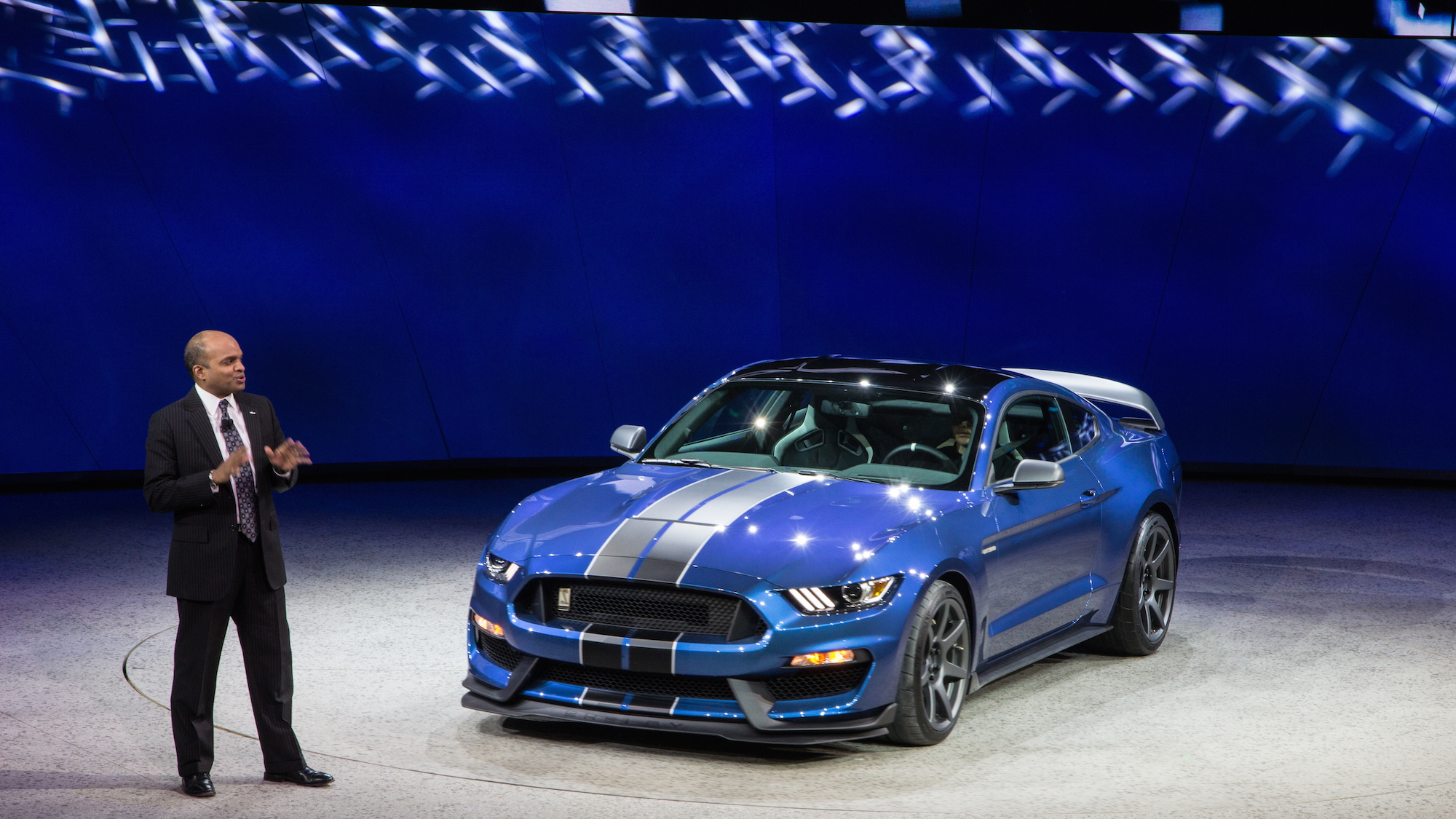 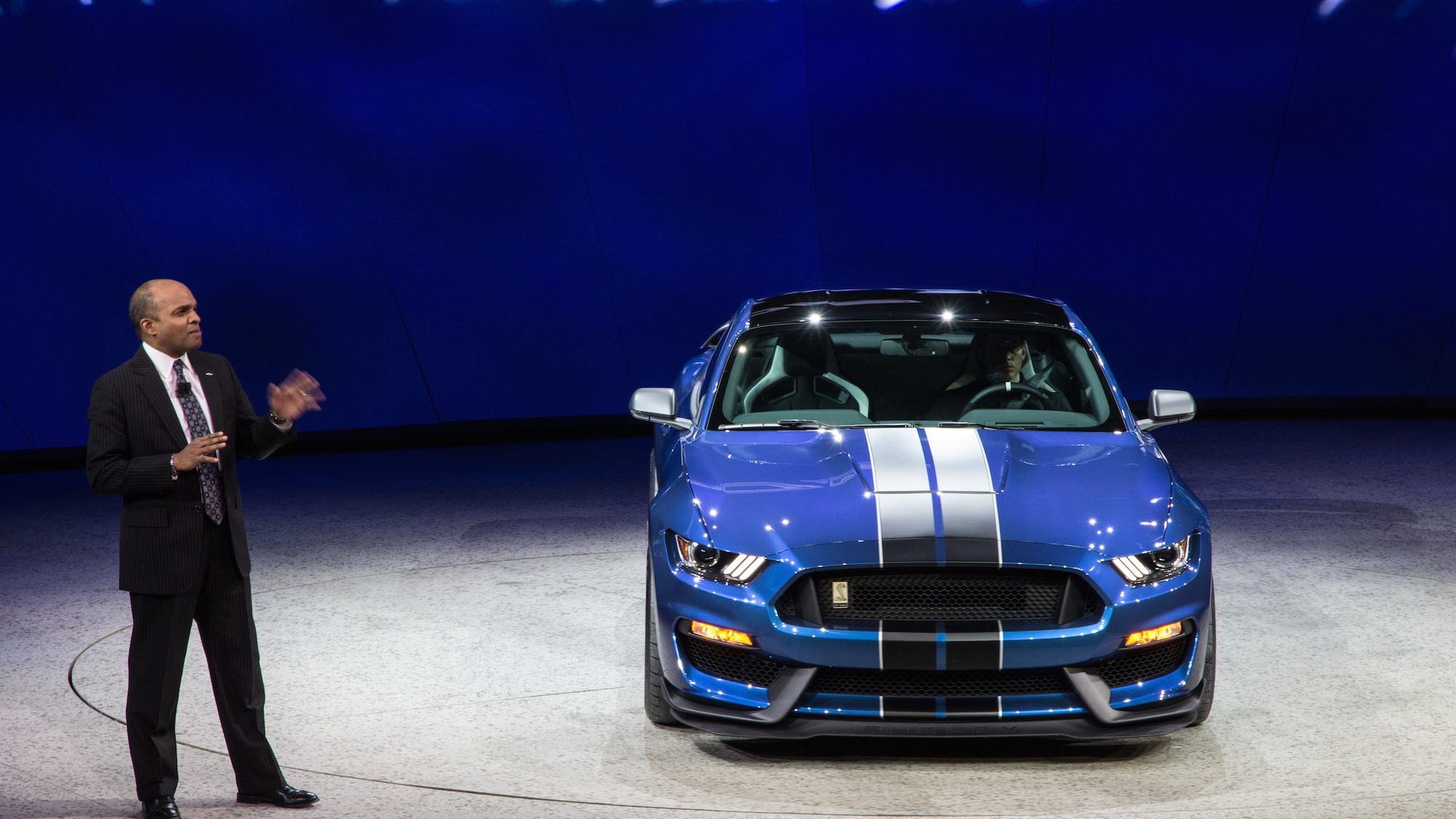 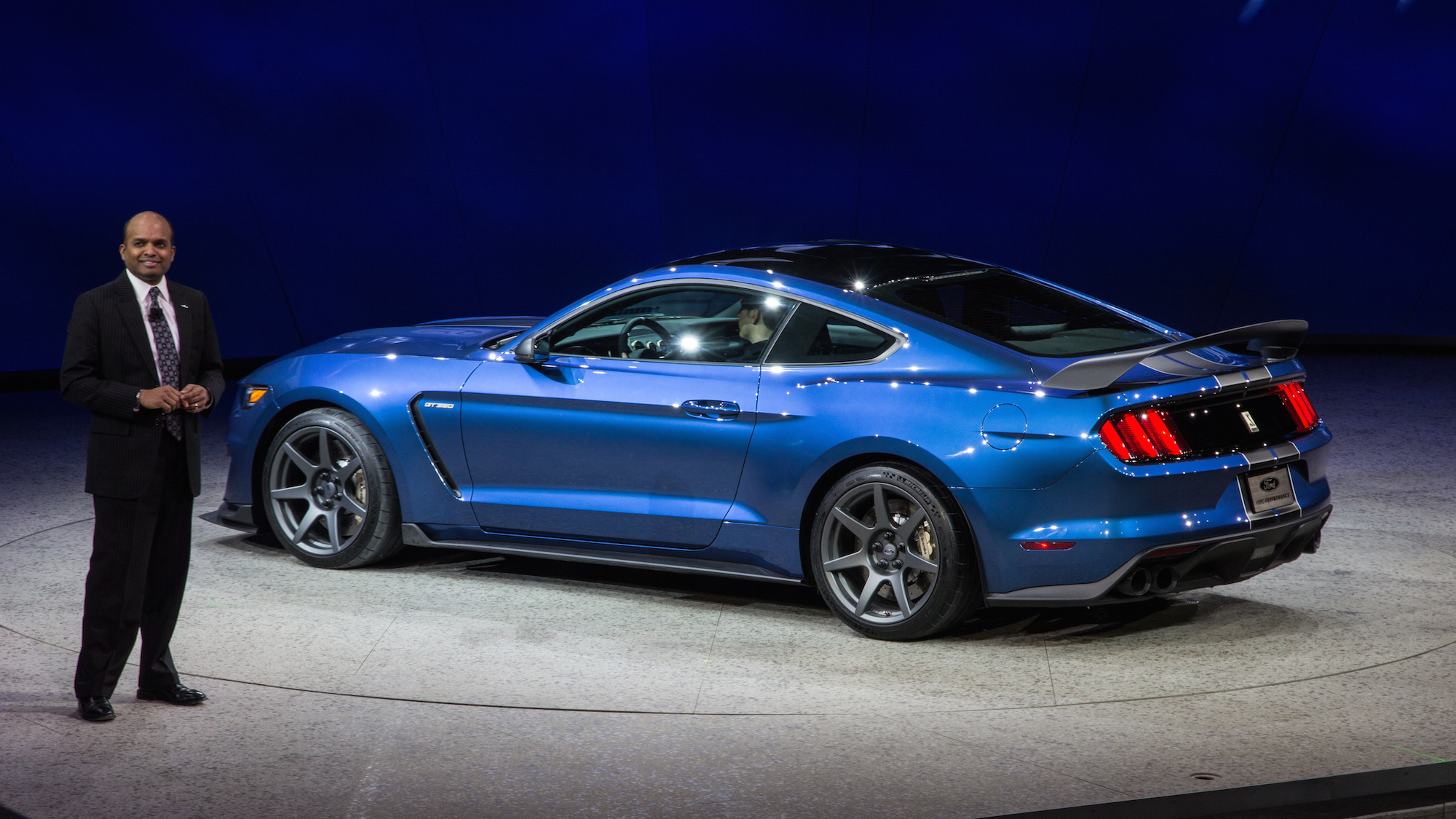 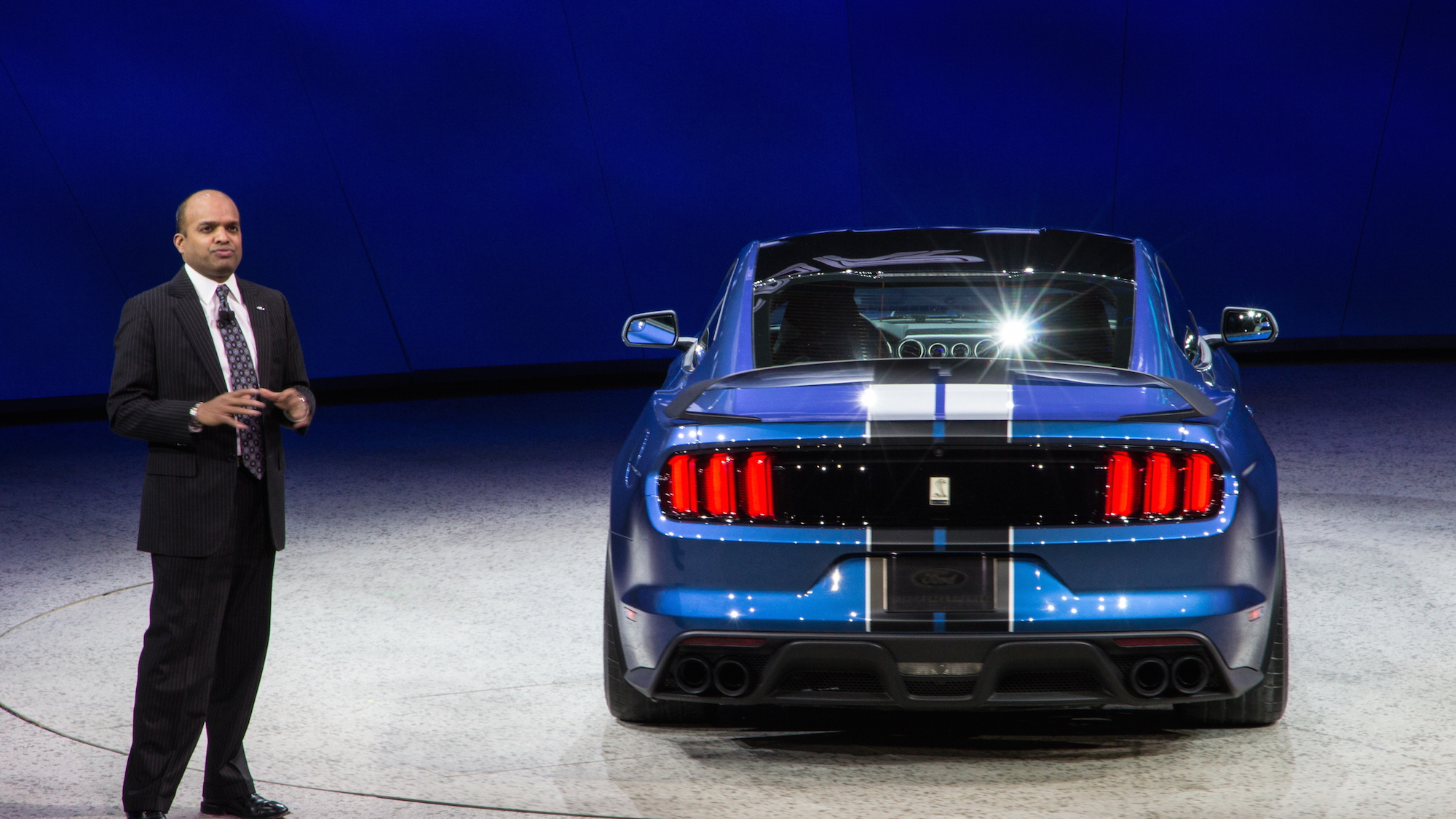 We do believe that the Ford Motor Company [NYSE:F] has hired a team of cheerleaders for the design and marketing offices. Their job? To stand around and chant "Be aggressive, Be be aggressive!" at every meeting. Since Ford has come out and stated that it plans to unleash a slew of performance products over the course of the next few years—more than 12 by the year 2020—those cheerleaders are doing their job. The latest proof of that is the 2016 Ford Mustang Shelby GT350R.

Ford has been hanging back while Chevrolet let loose its Z/28 Camaro. Chrysler has been throwing haymakers with the Hellcat twins, and Ford has been leaning back against the ropes. Today at the Detroit Auto Show though, the Blue Oval has stepped up and started punching back. We've already seen the 'regular' Mustang Shelby GT350, but Ford and its crew at the recently established Ford Performance skunk works have worked to tweak that street bruiser even further.

The result is the GT350R, which benefits from a slew of aerodynamic tweaks, chassis improvements, and the cutting of weight. As Chevy has done with the Z/28, Ford has stated that this is a track-focused car and it thus is devoid of parts not devoted to the reduction of lap times. Gone are amenities such as the air conditioning system, a stereo, trunk floorboard and carpet, a backup camera, and a spare tire. If a customer wants a few items thrown back in, there's an optional Electronics package that adds dual-zone climate control, an eight-inch touch screen fitted with a nav system, and a seven-speaker audio system.

If you can live without the optional extras, you save over 130 pounds compared to the standard Mustang Shelby GT350 Track Pack.

The engineers have also managed to save weight at each corner thanks to the use of carbon fiber wheels. You may occasionally see such rollers on ultra exotica, but Ford has managed to provide them here on the GT350R. The 19-inch wheels cut 13 pounds of unsprung weight from each corner. They're also shod with Michelin Pilot Sport Cup 2 rubber, so the car is going to grip, and grip well.

Pairing weight reduction with aerodynamic upgrades is always a good recipe, and that's just what Ford have done here. There are extra touches of aero everywhere you look, from the rear diffuser, to a plethora of vents, on to the front splitter and carbon fiber rear wing. Downforce is the name of the game here, and the GT350R is clearly ready to play.

All of the changes mentioned above will no doubt work in concert with the 5.2-liter flat-plane crank V-8 engine mounted under the hood. Ford hasn't said what the official numbers are just yet, but keeps throwing around that it's "more than 500 horsepower" and "more than 400 pound-feet of torque." That power will get to the ground through a chassis that's been tweaked and tuned specifically for the track.

We've all been waiting for Ford to step up to the gauntlet laid down by the Camaro Z/28. It's clear that time has come and we can't wait to pit these two against each other. The Hellcat can watch from the corner while it does donuts and burnouts, because there are adults in the room... and they need to talk.