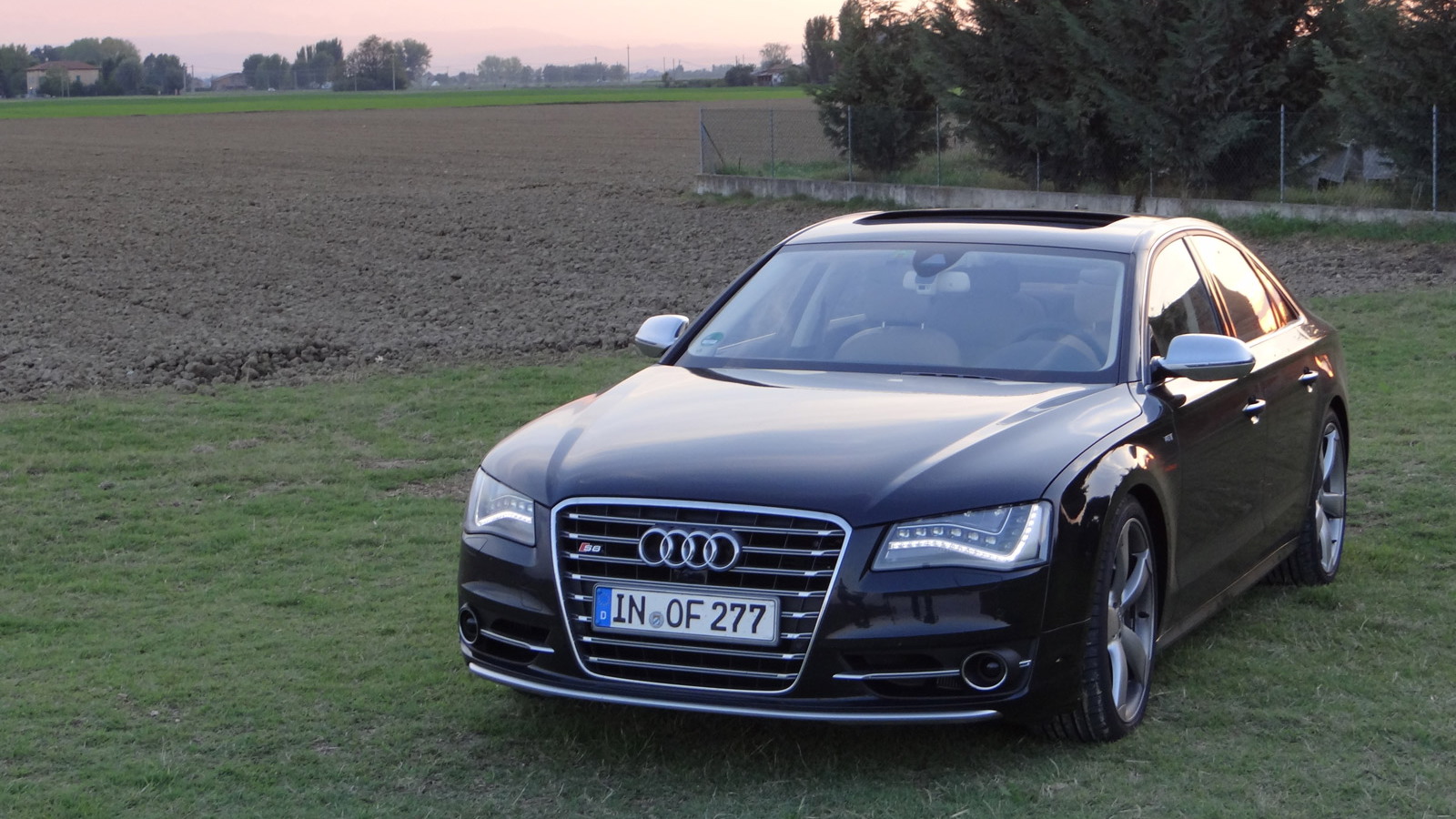 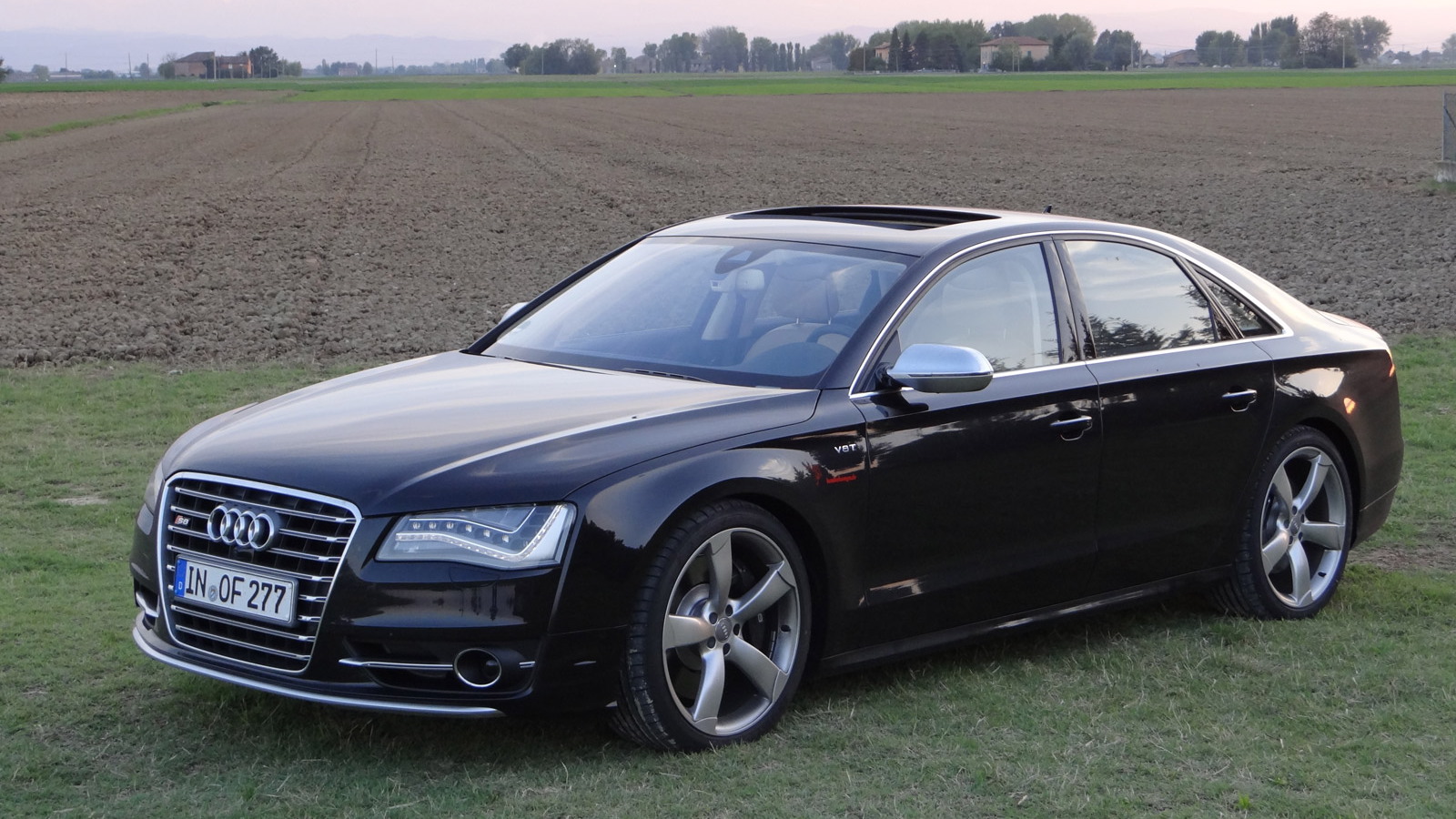 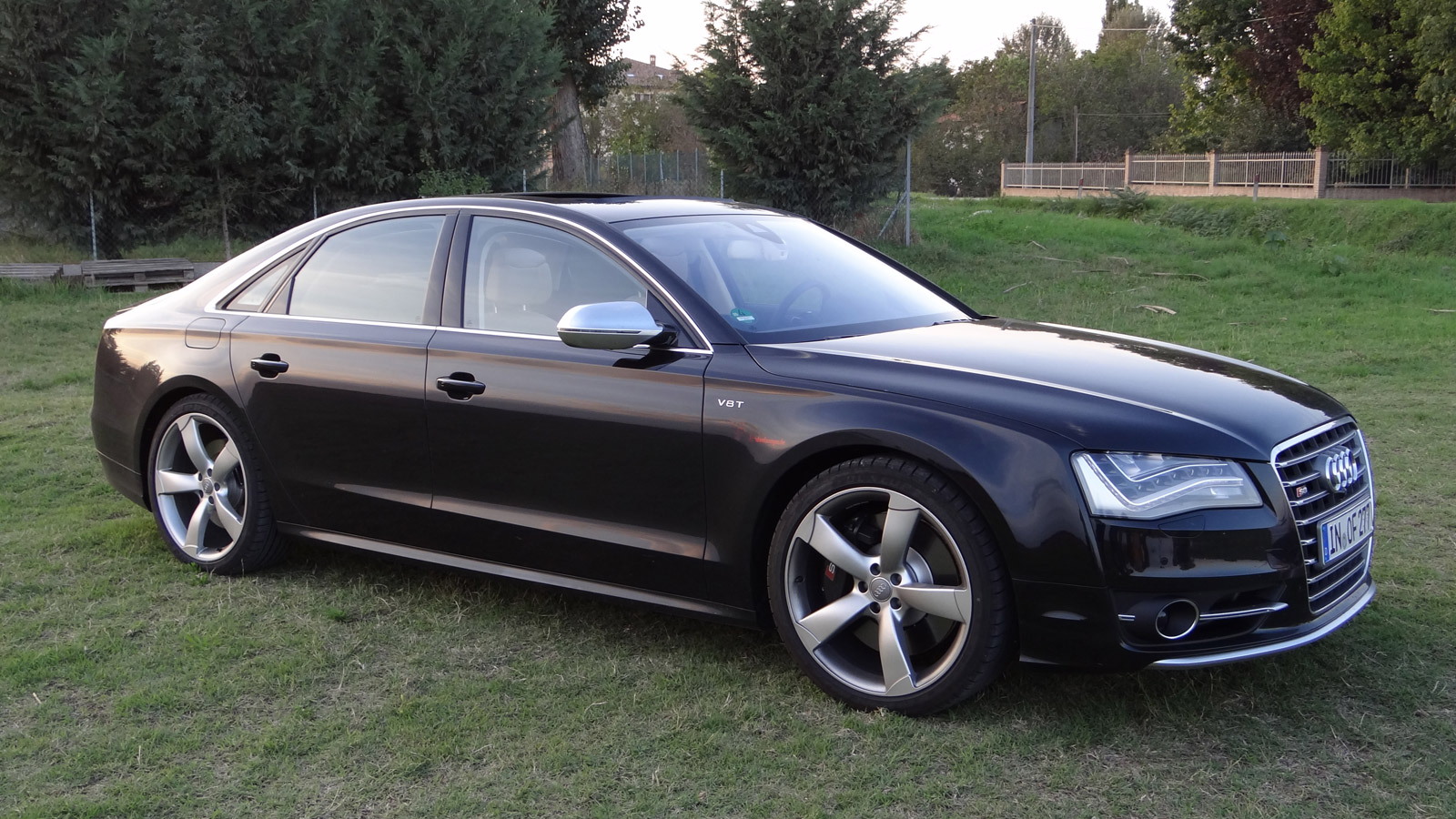 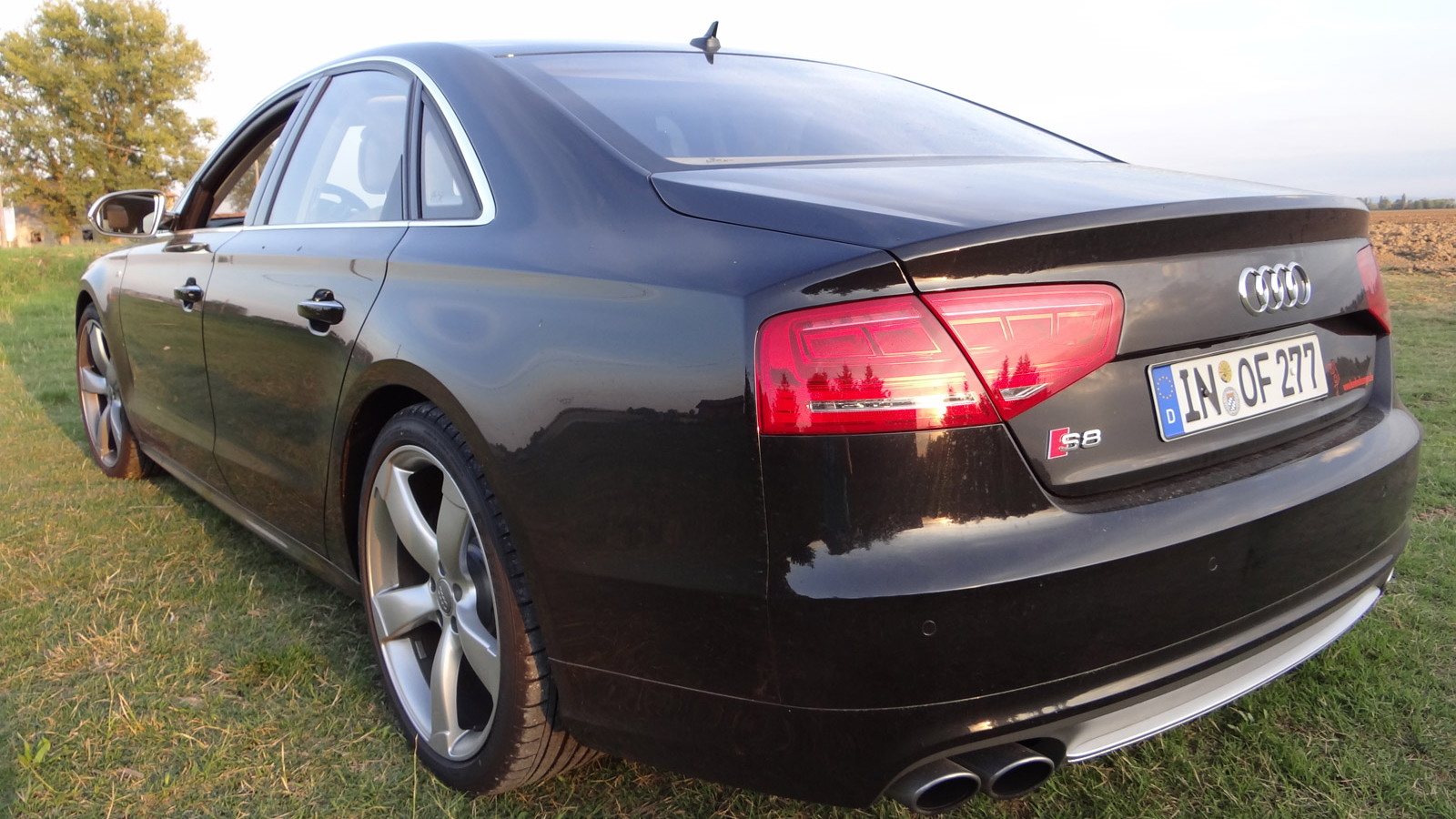 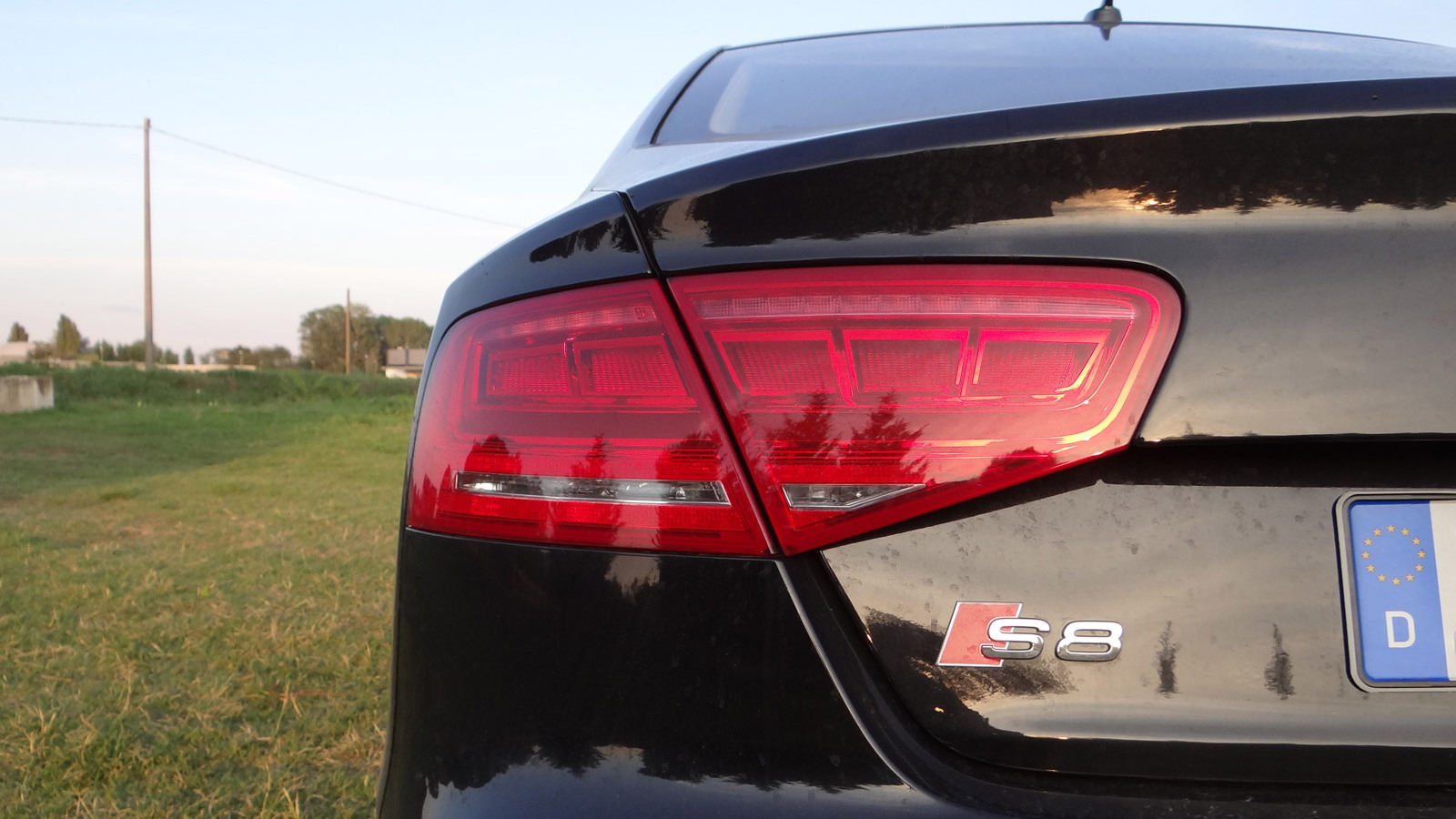 The previous generation of the Audi S8 was a bit odd among the full-size performance sedan crowd, though it was odd in a way we liked. Power came from a high-revving 5.2-liter V-10 whose design was derived from the unit in the Lamborghini Gallardo supercar, and its rating was an impressive—for the time—450 horsepower and 398 pound-feet of torque.

Subtle “V10” badging on its fenders were enough to tell onlookers there was serious performance residing within the svelte luxo barge, and the symphony emanating from under the hood gave owners a feeling they were driving something truly special.

Driving the latest 2013 Audi S8, you can’t help but feel a sense of loss. There’s still the aluminum construction and standard quattro all-wheel drive, the latter of which comes with a new Sport Differential to vary torque between the rear wheels, but now the choice of powerplant is a force-fed V-8 instead of a sweet naturally-aspirated V-10.

This is a similar setup found in rivals like the Mercedes-Benz S63 AMG and Jaguar XJ Supersport, and a slightly detuned version is also fitted to the new 2013 S6 and 2013 S7. In fact, you’ll even find it in Bentley’s new V-8 models and you can bet it’ll appear in a Porsche model or two eventually.

Sure, power in the 2013 S8 is up 16 percent on the previous model, while fuel economy has improved by an even more impressive 27 percent, but is this enough to convince buyers the car is still special? To find out we drove a black example fresh from Audi’s factory in Neckarsulm, Germany, through Switzerland and its beautiful Alps, and on to our final destination in Northern Italy.

The S8’s engine is one of the most advanced V-8s currently in production. Thanks to a twin-turbocharging system, peak output from the 4.0-liter unit is a healthy 520 horsepower and 481 pound-feet of torque. The latter is available from just 1,700 rpm, and makes highway passing a thing of joy. Just drop the hammer and feel the car hunch down as all that torque accelerates you to illegal speeds in no time. Did we mention the 0-60 time is just 3.9 seconds?

On the highway you can happily cruise at 75 mph, with the revs hovering as low as 2,000 rpm. This saw our mileage get as high as 23 mpg at some points. Drive a bit slower and you’ll have no problem achieving the official highway rating of 26 mpg. The EPA rates the city mileage at 15 mpg and the combined figure is 19 mpg.

Note, the ride is so smooth you can easily creep up to 90 mph without even realizing. Part of the reason for this is that inside the cabin, the sound of the engine is a bit muted—even with the sound generator set to “Dynamic” mode. Outside, however, the S8's engine has an old-school muscle car note to it that definitely turns heads.

Helping achieve the S8's impressive fuel economy numbers is a cylinder deactivation system, which drops the cylinder count to just four during low load situations. We found the system to be imperceptible. Audi says this is due to active engine mounts that dampen vibrations when running in four-cylinder mode as well as an active noise cancellation system that negates some of the engine and exhaust note.

The buttery-smooth eight-speed automatic gearbox also has two overdrive top gears, which most of the highway driving is done in. Of course, you can also switch to manual mode when you feel like, using a pair of paddle shifters for the gear changes. Other fuel-saving features we utilized on our drive include engine stop-start and adaptive cruise control, both of which were non-issues.

Around corners, the lightweight aluminum construction of the S8 ensures it feels nimble, at least compared to its rivals. With a curb weight of around 4,400 pounds (as tested), however, this is still a heavy car and you’ll feel this when heading into a turn with too much speed.

Understeer and body roll is notable close to the limit, but not unreasonable for a car of this size. Slowing rapidly is no problem, however, thanks to strong braking performance from massive 15.7-inch ventilated steel discs up front and 14-inch discs at the rear.

To aid handling, the S8 features adaptive air suspension with variable damping, which varies ride height of the body between three levels. The steering is equally reactive, adapting its steering ratio and boost to the driving speed to provide tighter cornering. Combine all this with quattro all-wheel drive, with a 40/60 front to rear split, and you're looking at one of the best handlers in the full-size sedan segment.

Furthermore, five driving modes—Comfort, Auto, Dynamic, Individual and Efficiency—allow you to change everything from the suspension damping, to the steering, throttle response, transmission speed and even the Sport Differential. Dynamic is the one you want to leave it in. This gives a nice weighty feel to the steering, a firmer—yet still comfortable—ride, and optimal engine response.

The latest-generation A8 is a very handsome car, and thankfully designers of the S8 haven’t strayed far from the elegant, purposeful look of the standard car. Exterior design accents of note include the body-color trim strips on the sills, polished aluminum-look mirror housings and chrome-look dual oval tailpipes. Some may find the look a little too subtle, though we think its sleeper status is perfectly suited for such a car. Our test model was also fitted with chunky five-spoke alloys measuring 20-inches in diameter. U.S.-spec models come standard with 21-inch wheels with 265/35 all–season tires.

Inside, the S8 delivers on its promise of a sporty but luxurious ride with multi-way, power-adjustable comfort sport seats built exclusively for the S8, a leather sport steering wheel with contrasting stitching and aluminum-look finish shift paddles and pedals. The multimedia interface (MMI) system has an 8-inch high-res display, Bluetooth networking and Audi connect wireless Internet.

One of the most brilliant features was the around view monitor, which made parking a breeze, even in some of the narrow spots we encountered. Our test car also had the available Bang & Olufsen sound system. It was impressive, though it may not be worth the upgrade from the standard Bose system if you mainly listen to radio.

You’ll find acres of space in the cabin, despite the S8 only coming in the A8’s short-wheelbase body. Our only criticism is the odd combination of carbon fiber, aluminum and wood trim our test car featured. Storage capacity is 13.2 cubic feet.

For full-size sedans, the S8 is near the top of the class. It handles brilliantly for its size, it’s got abundant power and torque, and when desired it’s also extremely fuel efficient. However, unless you really need the space of a full-size sedan, or the prestige factor, we’d argue that you’d be just as happy, if not more so, in the S6 or drop-dead gorgeous S7.