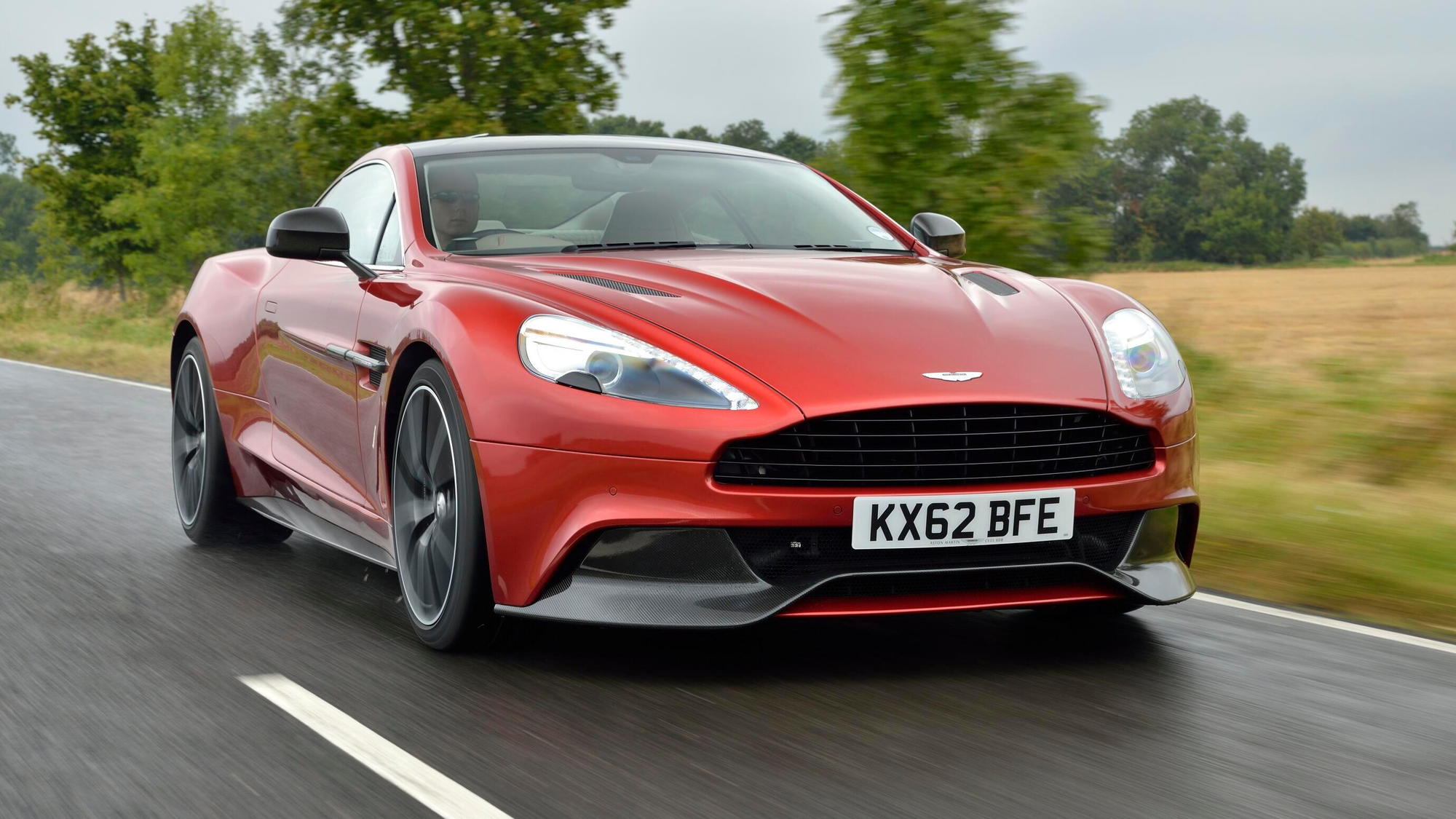 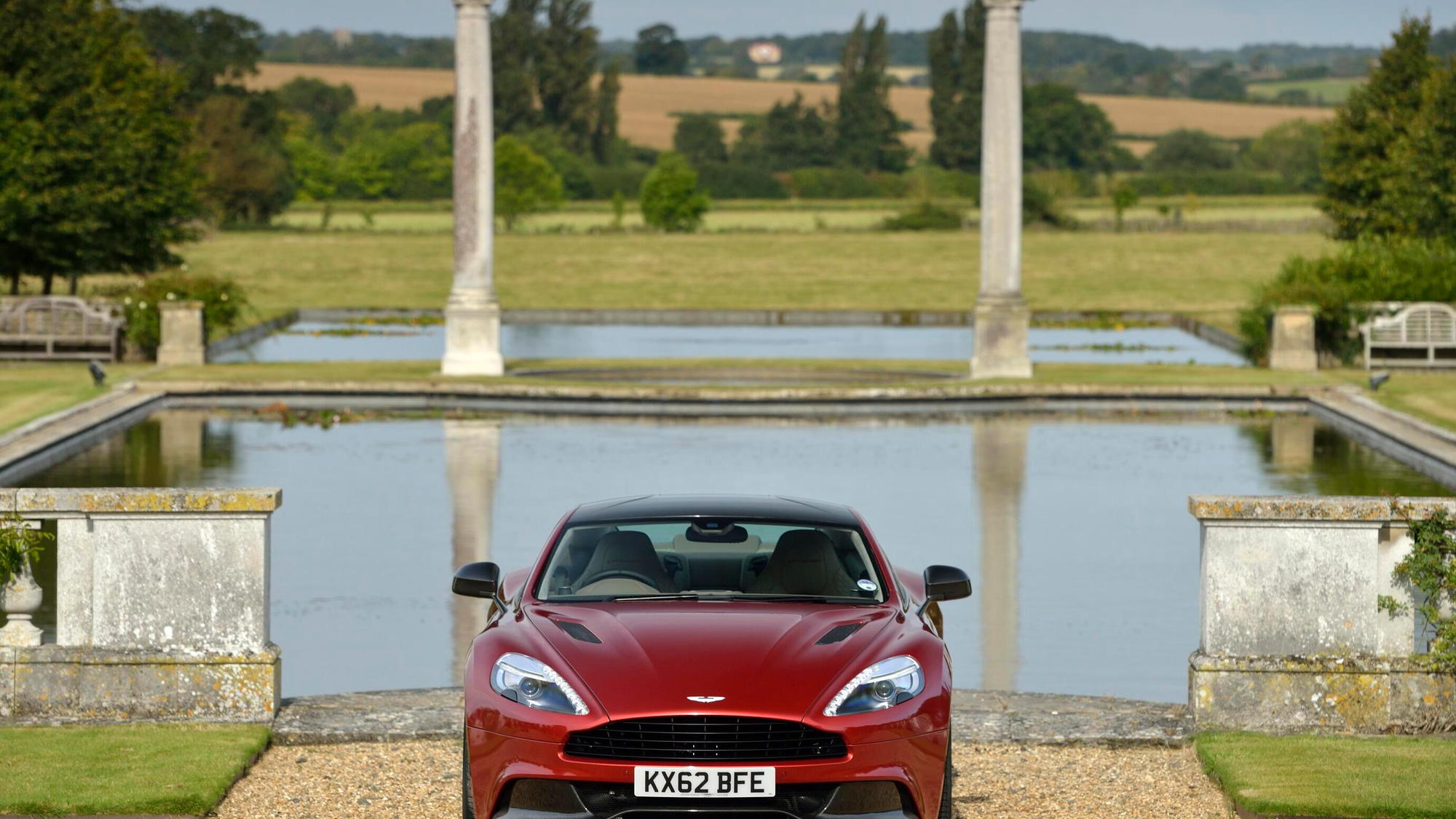 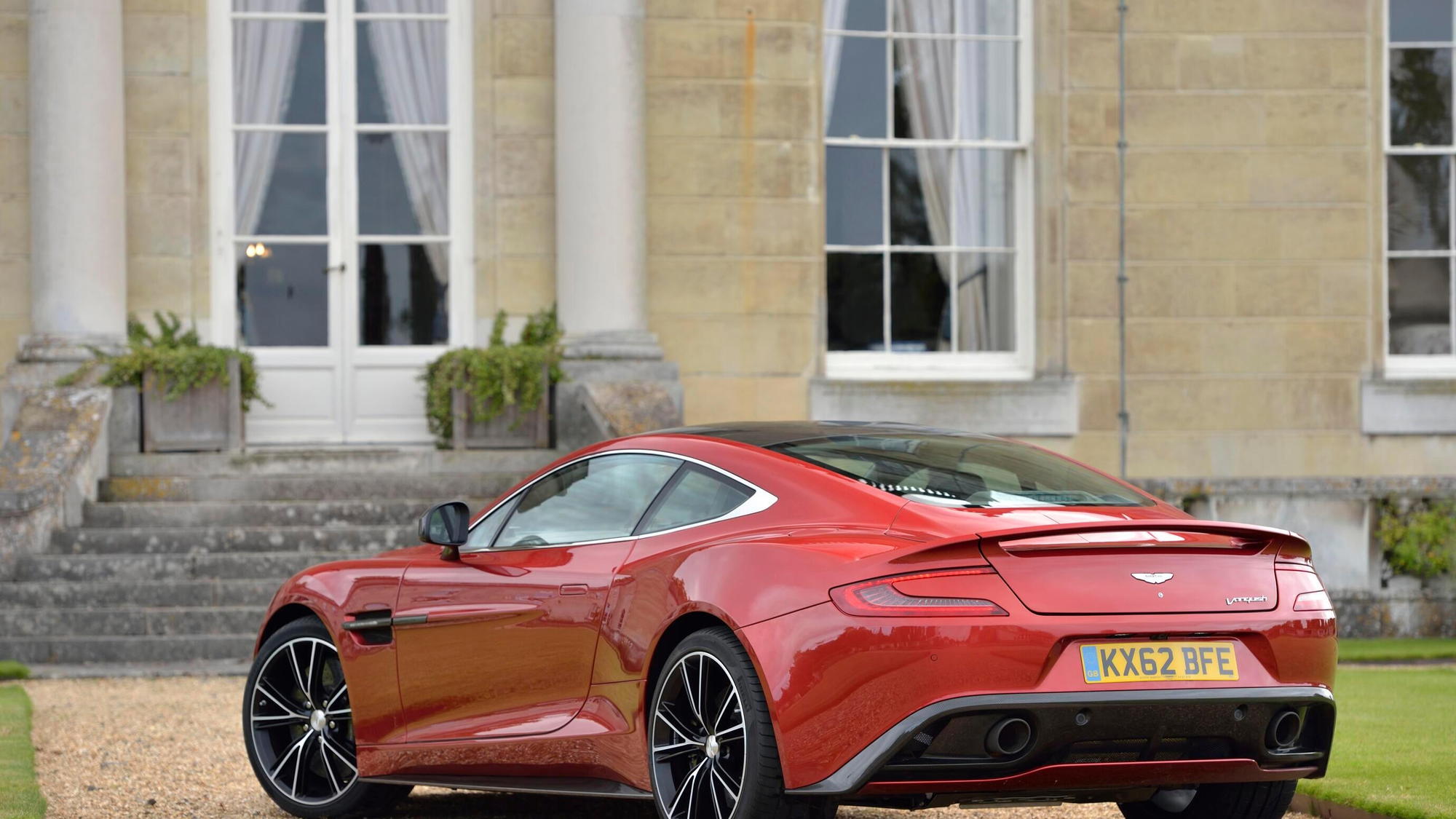 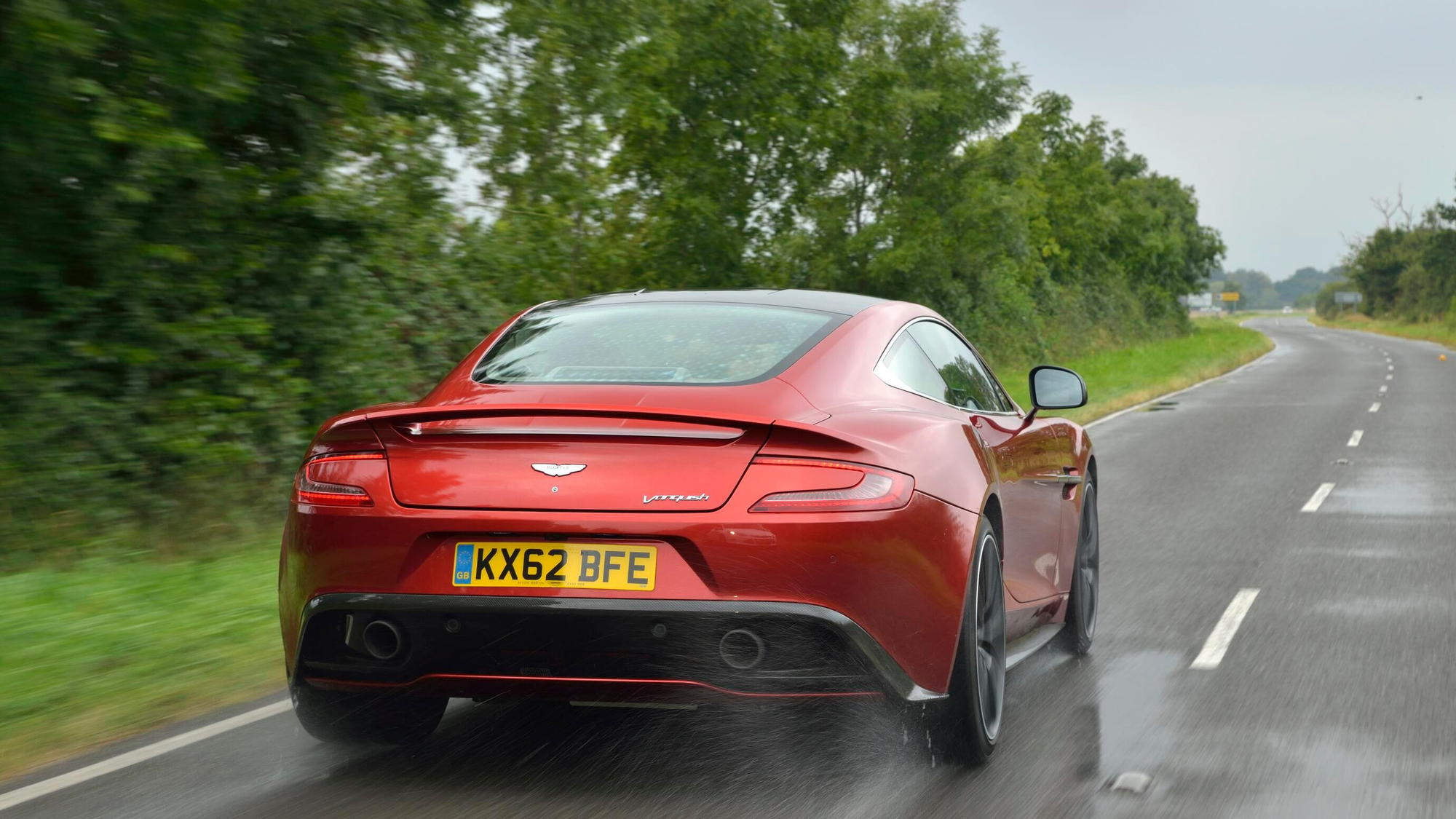 Handed the crystalline key fob to a 565-horsepower, $280,000 car with the steering wheel on the wrong side, then loosed about the narrow, broken roads around Newport Pagnell--to drive on the wrong side as well--I shook off my jet lag, smiled, and acted like it was nothing.

Of course, it was anything but nothing. The fourth generation of Aston Martin's VH (Vertical Horizontal) architecture wrapped in a full body of carbon fiber, powered by a potent 6.0-liter V-12 engine driving the rear wheels through a Touchtronic 2 six-speed automatic transmission, capable of 4.1-second 0-60 mph runs, a top speed of 183 mph, and turning the heads even of jaded Aston hometown residents from roughly 100 meters. No, the 2014 Aston Martin Vanquish is most certainly something.

Figuring out what, exactly, that something is would be the purpose of the next two days. Two very fun and surprisingly engaging days. Two slightly confusing days.

At its root, the Vanquish is a shockingly simple idea: big engine, stiff chassis, lightweight materials where possible, and a fresh take on the modern Aston Martin design theme. Roll those together and you ought to have a world-class "super GT." And you do. 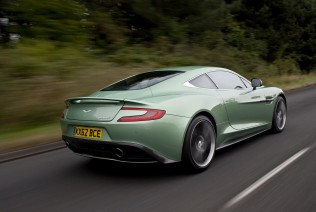 Available coated in a rainbow of custom hues, shod with one of three unique wheel designs, and clad in exquisite, hand-sewn leather and cloth inside, there's no question the Vanquish is an exhibition of Aston Martin's full capabilities. In fact, the brand calls it the best car they've ever built--including the One-77.

I tend to agree. It is an exquisitely beautiful car, inside and out.

Behind the wheel, the Vanquish is what it intends to be--a comfortable, capable, and confidence-inspiring grand tourer. It's not a sports car, and it doesn't for a minute feel like one; there's no sense of lightness or tossability. Instead, there's a sense of massive grip, a planted stance, and a desire to simply proceed at triple-digit speeds.

The speed of the Vanquish is deceptive. Hustling along truly pitiful, broken English farm roads, dicing with the weeds or the ditch on one side and house-sized tractors and combines on the other, it's easy to think you're just skimming along at the speed limit--until you look down at the instruments and see you're cresting 100 mph.

A dynamic suspension and Aston Martin's Sport button on the steering wheel are responsible for that gulf between perception and reality. While driving this incredibly expensive car over some of the worst roads possible outside the Isle of Man, it was obvious how well the dampers, chassis, and Aston's programming managed the car's disposition, at the same time keeping from scrambling its occupants brains with the bumps, dips, and cracks in the pavement.

Like the U.K. weather itself, however, it's not all sunshine with the Vanquish.

The rear seat is, at best, a cruel joke. In truth, it's more a seat-shaped parcel shelf, crushed as it is against the backs of the front seats with drivers of even modest height. That's all the more evident in Aston's offering of the Vanquish as either a "2+2" or a "2+0"--the latter admitting the truth of the layout.

At the limits, or as near to them as I cared to come on the open road, the Vanquish loses its encouraging nature, and instead of pushing you faster without realizing it, actively discourages anything like 10/10ths. The math of the Vanquish goes like this: you drive 6/10ths, it delivers 8/10ths seamlessly; you ask for 10/10ths, it says, "Excuse me, sir, but wouldn't 8/10ths be preferable?" This is no Porsche Panamera, let alone a 911, when it comes to really getting after it. The six-speed automatic transmission works well in automatic mode, but in manual mode, there's no sense of immediacy like you get with a dual-clutch transmission, and the paddles themselves are less-than-positive in their engagement and operation. The whole driving experience conspires to keep you at a brisk, but not breakneck, pace.

Take that together with the matter of weight: Despite the carbon fiber body shell, the Vanquish weighs about 3,900 pounds. That's not ridiculously heavy by today's standards, especially considering the opulence of the interior, but it's far from light, and it feels it.

There's a trunk at the back of the Vanquish, and while it's not supercar-useless, it's not golf-outing capacious, either. You'll fit two fair-sized carry-ons or travel bags and some odds and ends in there, and that's about it. 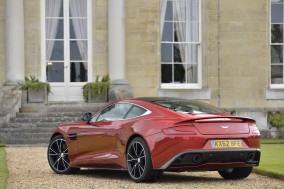 Then there's the matter of design. The 2014 Vanquish is, without question, our favorite of the Aston lineup. It wears the all-too-familiar look better than any we've seen in recent years. But the problem is that familiar look. As innovative as Aston has been with the bodywork (just take a close look at that integrated, one-piece rear spoiler/trunk lid, a piece Aston says would be impossible to make from metal) it still comes together in a way that looks, in simple terms, a whole lot like every other current Aston Martin. That's great for brand identity, but it's terrible for differentiation--especially when a $100,000 V8 Vantage gets you into the same club as the $280,000-and-up Vanquish.

Taking the place of the DBS in Aston's range, and pushing the Virage out of the picture, the Aston Martin Vanquish easily fulfils its role as the top GT in the lineup. Its mix of exclusivity, bespoke craftsmanship, and British heritage also put it among the best GTs in the world, though that rarefied air also puts it in company with some of the best driving GTs in the world, and here, the chosen balance of the Vanquish sets it apart. Unlike a Ferrari or a Porsche or even a BMW M, the Vanquish puts the experience of the journey, rather than the driving itself, at the fore--and that may be its greatest success.

Aston Martin provided travel and accommodations so we could bring you this first drive review.