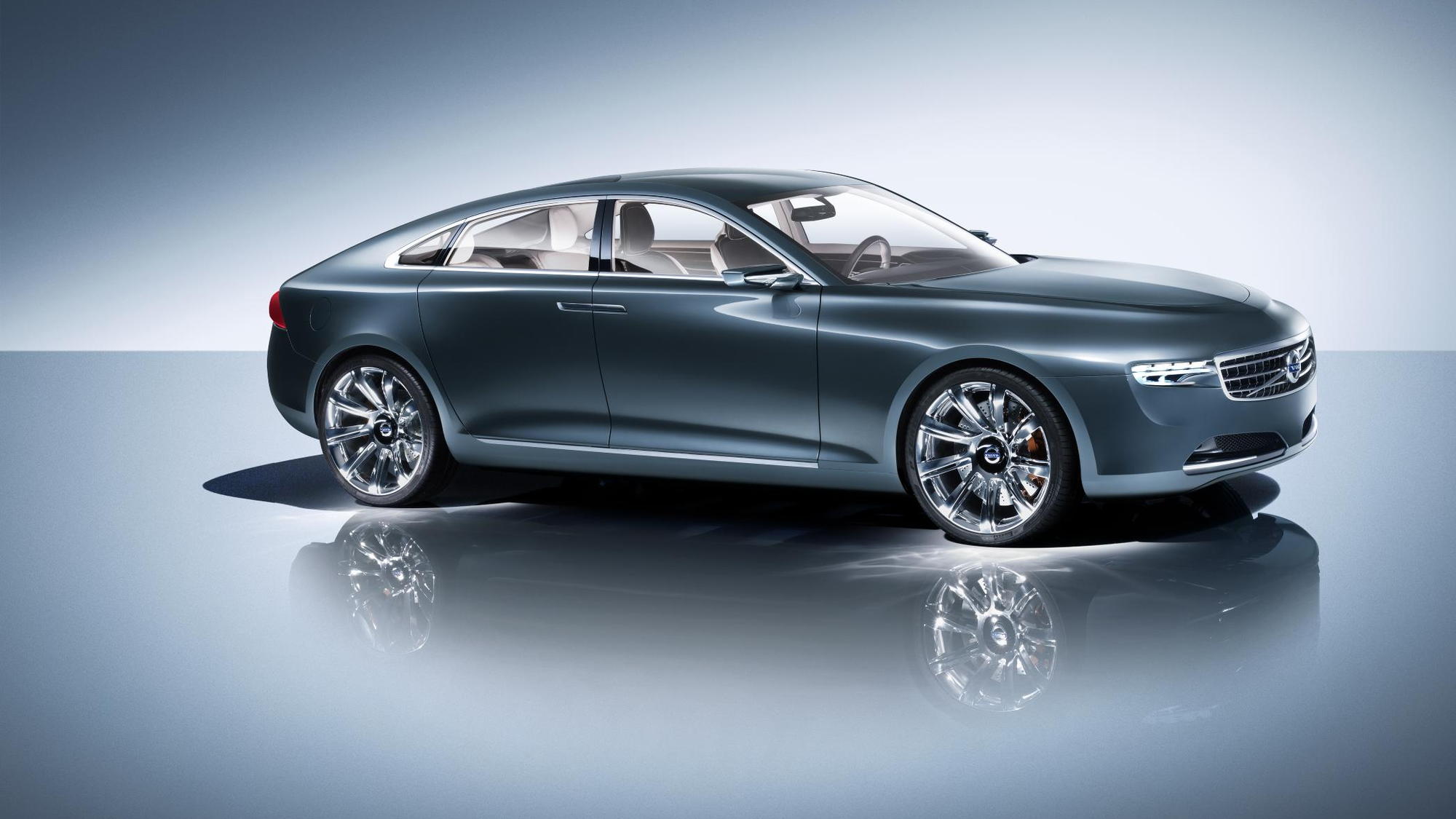 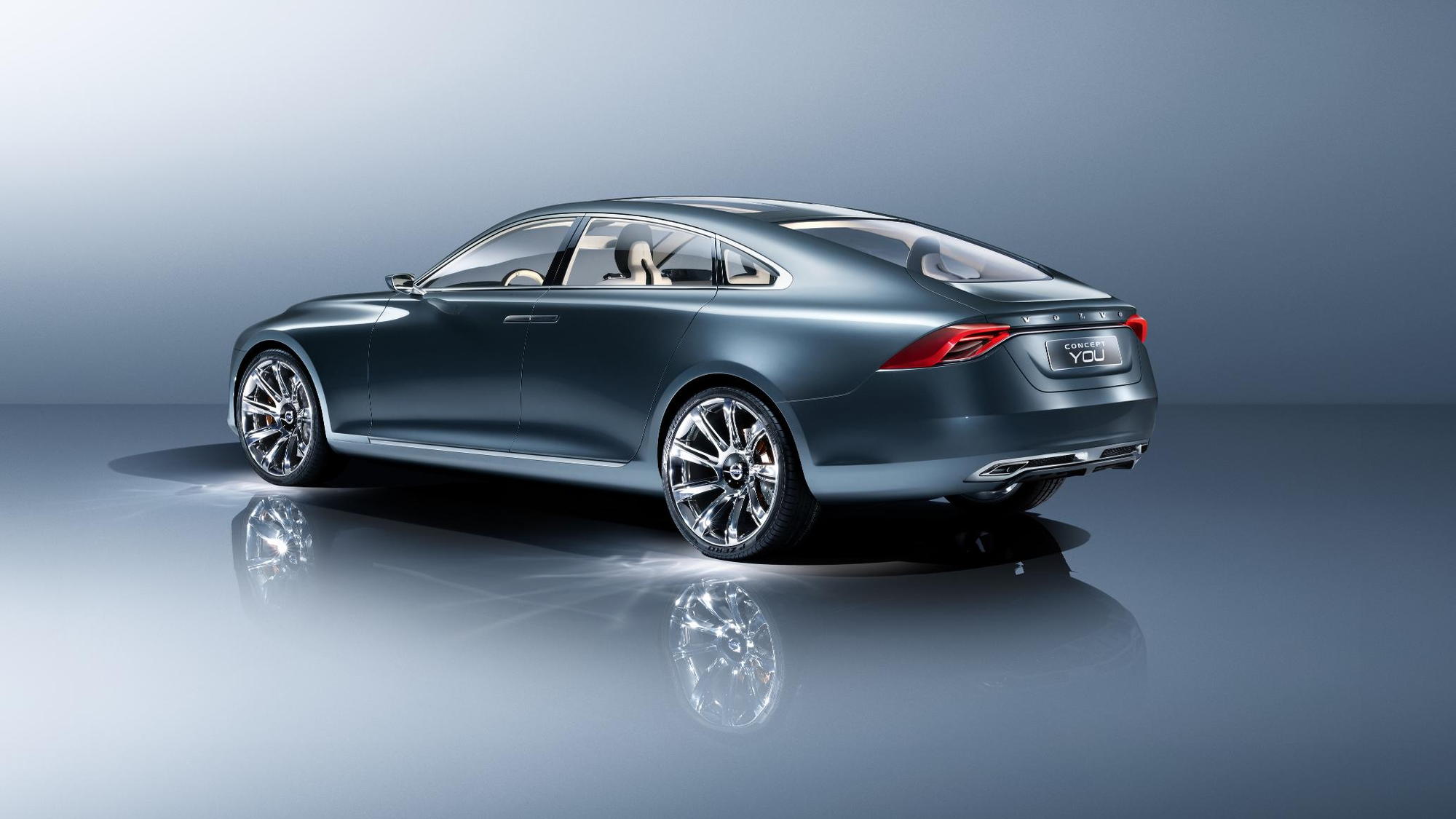 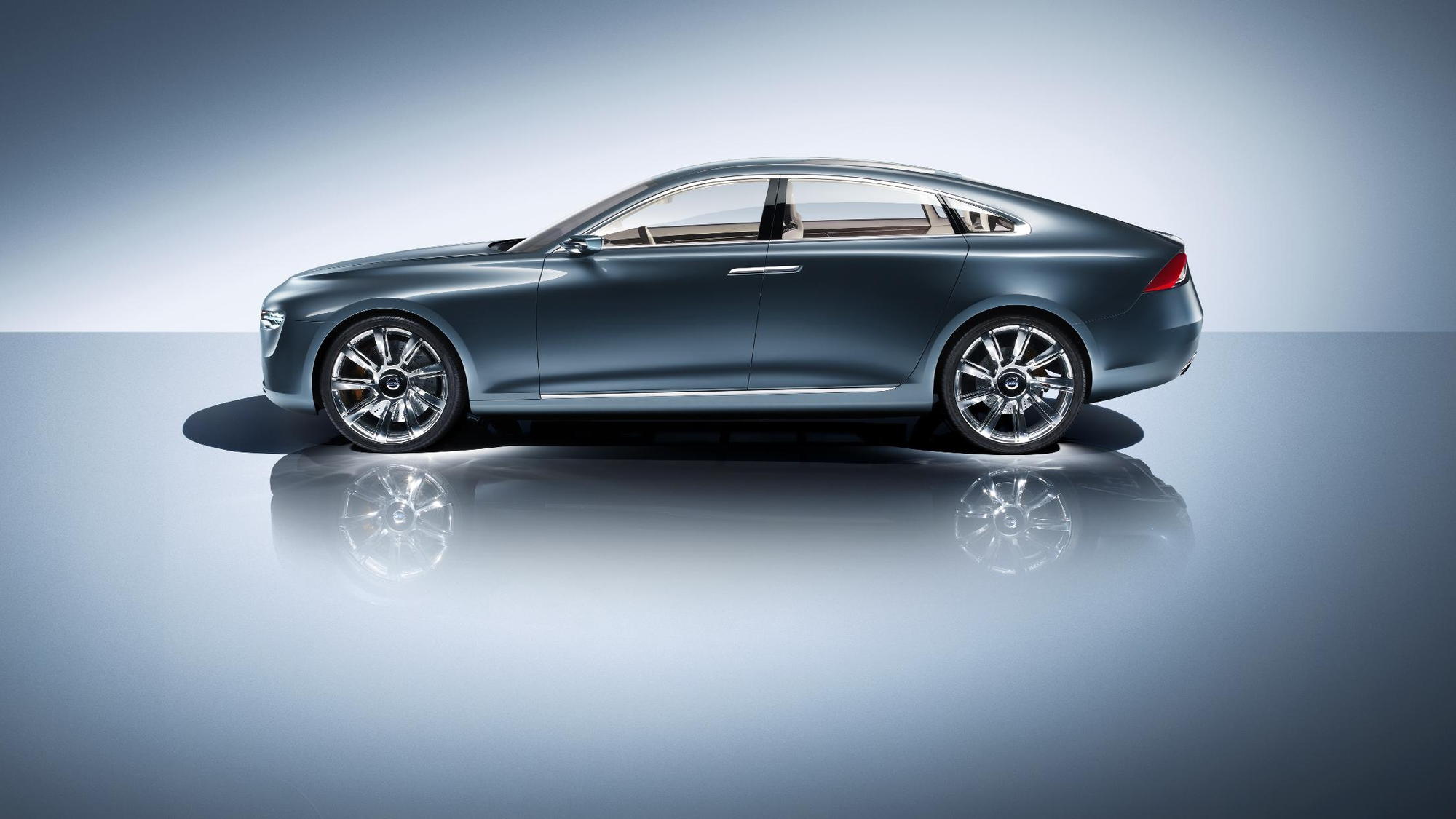 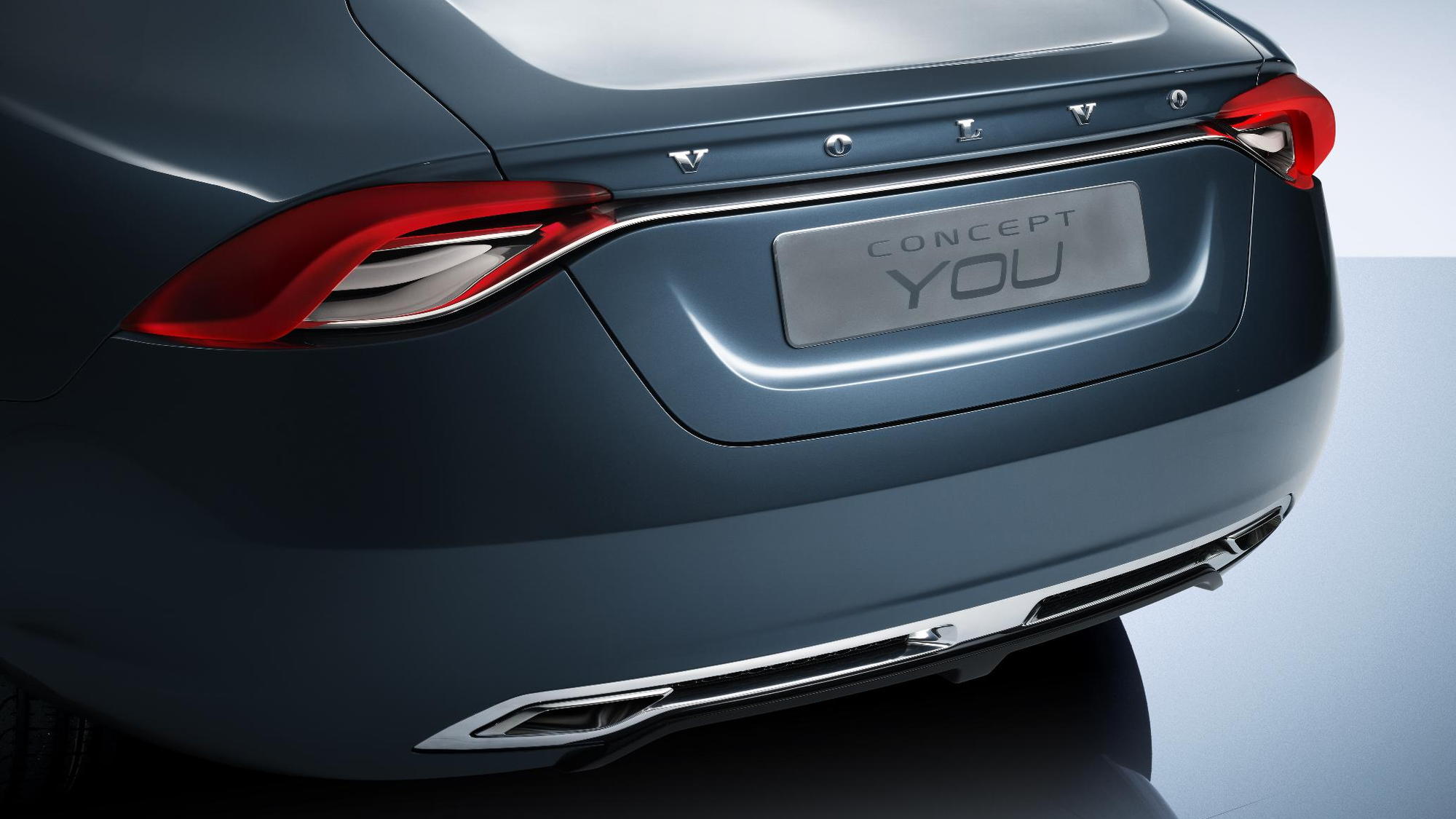 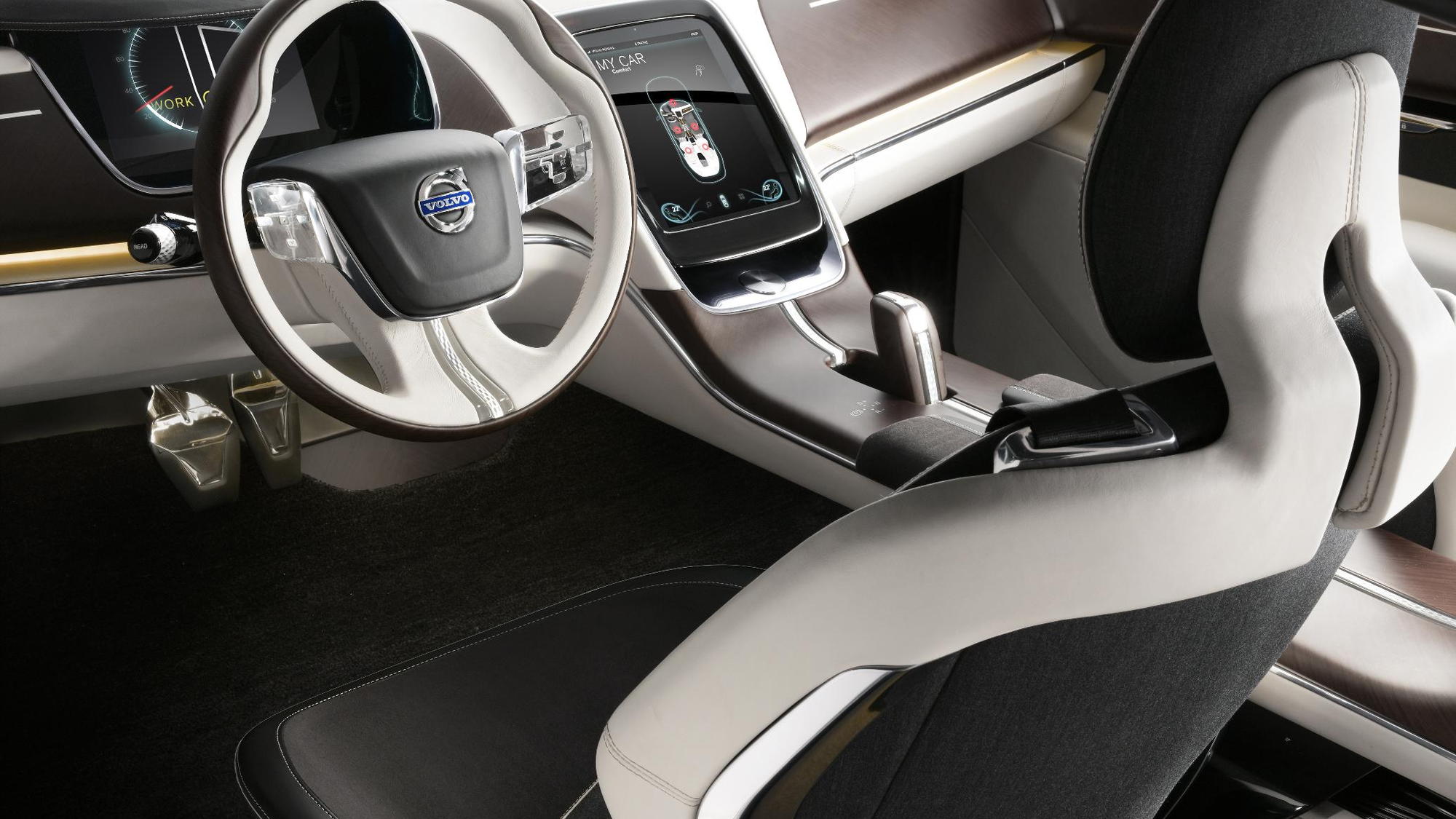 6
photos
Billed as an evolution of the Concept Universe, the latest forward-looking design out of Volvo is the Concept You, unveiled today in Frankfurt. Taking the full-size sedan conceptualization to the next level might hint that plans for a futuristic Volvo flagship might not be as dead as previously reported.

In fact, in direct contradiction to reports of the Concept Universe's lack of production plans, Volvo CEO Stefan Jacoby told press today, "Concept You gives a good indication of what you can expect from our next large sedan." So what does that entail?

The Concept You features a coupe-like profile, high-tech control features, a luxurious interior, and a focus on Scandinavian design.

Volvo says the Concept You, as the name implies, was designed around the buyer's needs and wants, including new ways of remaining connected to the web while in the car, improving the entertainment and comfort of the car, and integrating design with functionality.

An "air-powered" sound system from Alpine uses a "FreshAir" subwoofer to bring in air from outside the car to improve the sound of the system while cutting weight compared to traditional sound systems. The Concept You control center integrates a touchpad-based control system to take the place of buttons and dials, while a Driver Information Monitor (DIM) and heads-up display relay key information. Even the steering wheel has integrated touch screens.

Truly futuristic features are also present: a touch screen in the center console stays in "sleep mode" until the driver looks at it--cameras follow eye movements and turn it on as needed. Another sensor monitors hand movements and engages the infotainment system's control mode. Data can be moved from one screen to another through gestures, and can send and receive data from rear-seat passengers via the the same screens. There's even an in-car file transfer system.

For the full details on the Concept You, check out the official release on page two.

Following on from the reveal of the Concept Universe earlier in the year, the Frankfurt Motorshow marks the debut of an evolution to the Concept Universe - Concept You - and gives another insight into Volvo Cars future. Both concept cars are being used as design studies to obtain input from the global car buying public to find the ultimate design of the next large sedan from Volvo.

"Concept You gives a good indication of what you can expect from our next large sedan. The blend of contemporary Scandinavian design, exquisite craftsmanship and intuitive technology will appeal to luxury car buyers all over the world," says Stefan Jacoby, President and CEO of Volvo Car Corporation.

The Concept You, combines a sleek coupé-like exterior with a luxurious high-tech interior that keeps the driver in command via intuitive smart pad technology.  Concept You's luxurious interior gives luxury sedan customers a full experience of the craftsmanship and intuitive technology that will be the hallmark of future Volvos.

The company has collected global feedback on Concept Universe, both through surveys and by closely monitoring social media comments.

"The most valuable input has been used in the development of the Concept You. This car features a more daring, coupé -like profile than the Concept Universe, while the front moves towards a more classic Volvo look," explains Peter Horbury, Vice President Design at Volvo Car Corporation.

He added, "The fastback profile mirrors a strong trend among European buyers. With growing signs that Chinese "taste buds" are moving rapidly in the same direction, our main aim is to explore how daring our next large sedan should be in order to be a global success. We are very eager to hear what people think about the Concept You."

Volvo Car Corporation's strategy is to achieve profitable growth by being a truly global company with products designed around customers' needs and lifestyle.

"With our hearts in Sweden and our eyes and ears all over the world, we intend to be the brand that best interprets what buyers of modern luxury cars want," says Stefan Jacoby. He adds:

"The Concept You reflects how people's perception of luxury is moving beyond the traditional perspective. There is a growing appreciation for the ingenious blend of elegant design, superior craftsmanship and smart technology."

Several aspects of the new strategy

"We will compete with the best with our special kind of luxury. Volvo's cars are intuitive and uncomplicated. Our customers don't have to give away driving pleasure to drive safely. They can be environmentally conscious and still indulge the pure joy of owning a luxury car," Stefan Jacoby concludes

The luxurious interior of the Concept You features a blend of intuitive smart pad technology and first-class craftsmanship.

"The Concept You explores new territories in our search for the ultimate intuitive car that makes the owners manual a thing of the past. Smart phones and smart pads have brought mobile infotainment into a new era. Here, we use a number of touch-screens to replace buttons and controls in order to make the driver totally connected, totally in control. The technology also helps us to create a refreshingly uncluttered interior," explains Peter Horbury.

The Concept You control centre consists of four main areas; a digital Driver Information Monitor (DIM), a head-up display on the windscreen, a touch-screen in the upper part of the centre console and a touch-screen between the two individual rear seats. The wood/leather steering wheel has aluminium and glass paddles with integrated touch-screens.

The touch-screen in the upper part of the centre console remains in sleep mode until the driver looks at it. A hidden infrared camera registers the eye movements and information is displayed on the screen.

Another sensor registers hand movements and triggers the Infotainment system's control mode. The possibilities vary depending on whether the screen is approached by the driver or by the front passenger.

"Certain functions, such as surfing the Web, are only accessible from the passenger side while the car is rolling. The technology knows who is the present operator and adapts itself automatically," says Peter Horbury.

The driver can "flip" data from the central touch-screen to the head-up display and can exchange data with the rear passengers. A light guide in the free-floating centre console indicates file transfer.

The Infotainment system also integrates a high-end sound system from Alpine. It features the unique "FreshAir" subwoofer - a not yet released technology that uses the air outside the car to create the ultimate listening experience.

The interior is dedicated to offer design-driven customers a comfortable, cultivated, Scandinavian inspired environment that is also user-focused and refreshingly uncomplicated. Every detail has been chosen with the customer experience in focus.

The interior is driver-orientated at the front and comfortably relaxed in the rear. The dark colour scheme in the front seats fades seamlessly towards the rear until it fully transforms into a light rear seating area. The interior moulds into the rear seat and becomes part of the seating environment.

Volvo Car Corporation has partnered with several other famous brands in order to create a genuine feeling of luxury with the right Scandinavian touch.

The four individual seats blend chrome-free leather from Bridge of Wear with Dinamica ecological suede. The off-black front seats have suede in the centre to create optimal grip. The soft beige rear seats are designed for pure comfort with leather in the centre and suede on the sides.

The Concept You design also integrates the luxurious qualities of a tailor made suit into the car. The back of the front seats and the door panels feature exclusive Italian fabric and designs from Swedish fashion house Oscar Jacobson.

The wooden floor, which echoes Scandinavian homes, is covered with a specially designed hand-tufted carpet from world-famous Swedish brand Kasthall. Just like the rest of the interior, it fades from dark in the front to light in the rear. The front texture has a sporty firmness, while the rear part of the carpet is luxuriously soft.

The Concept You is finished in a light blue, liquid metal paint from DuPont. The ventilated disc brakes are developed by Volvo's racing specialists Polestar.

The car's fastback silhouette is emphasised by the 21-inch polished aluminium wheels with a twisted twin-spoke design and tyres from Pirelli (275/30/21).

Up front, the Concept You grille - which has a more classic appearance than the Concept Universe - features details with the same beautifully polished craftsmanship.

"The design of the wheels, the grille and details in the innovative headlamps have been inspired by the exquisite works of world-famous Danish design house Georg Jensen. Their precious items capture the essence of Scandinavian design. Uncluttered, organic surfaces and superb craftsmanship that radiate timeless luxury," says Peter Horbury. He adds:

"This eternal beauty of Georg Jensen design is what we are aiming for with the whole concept car. Just like the finest luxury goods, this design should feel handcrafted and durable enough to stand the test of time."