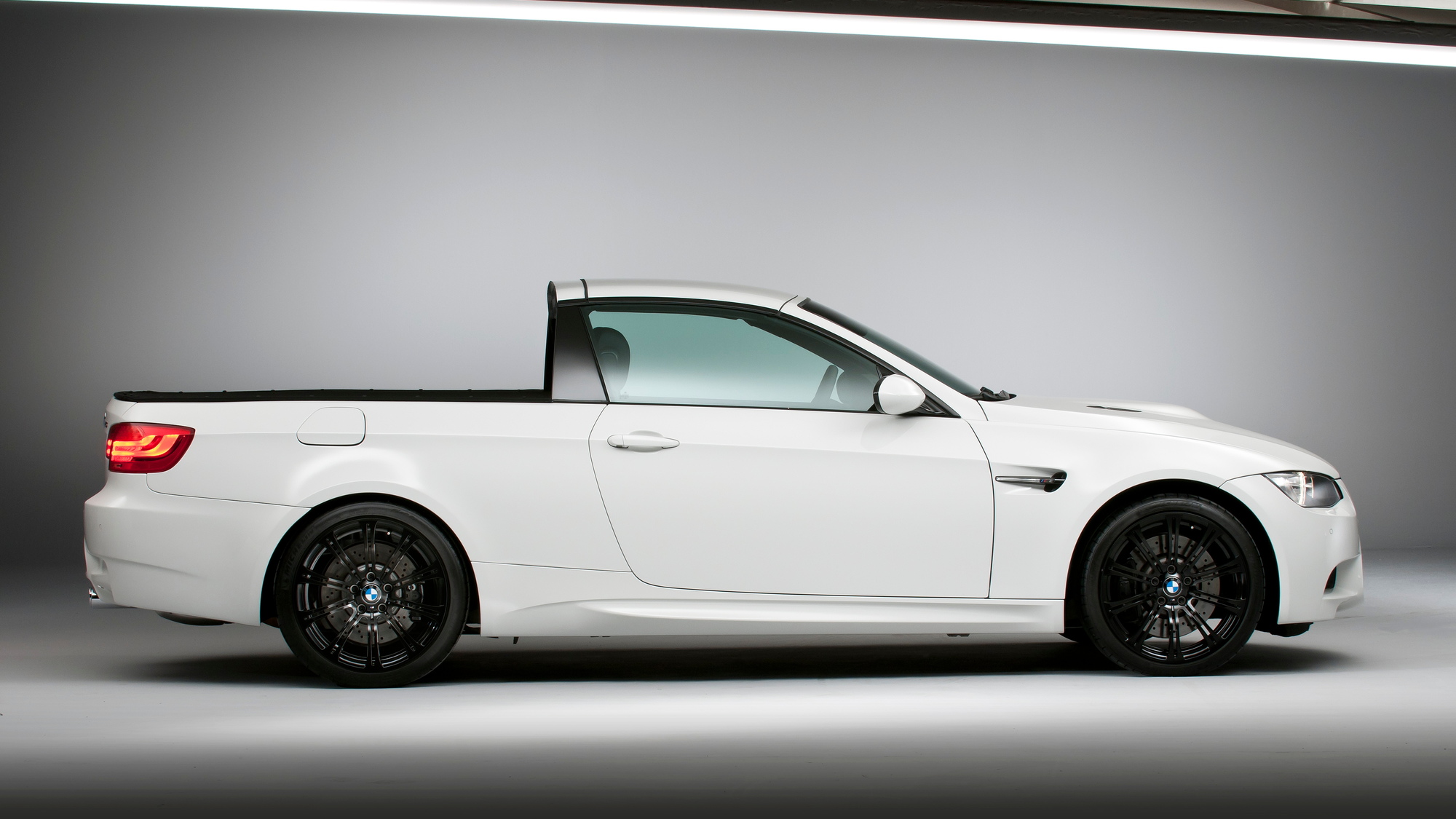 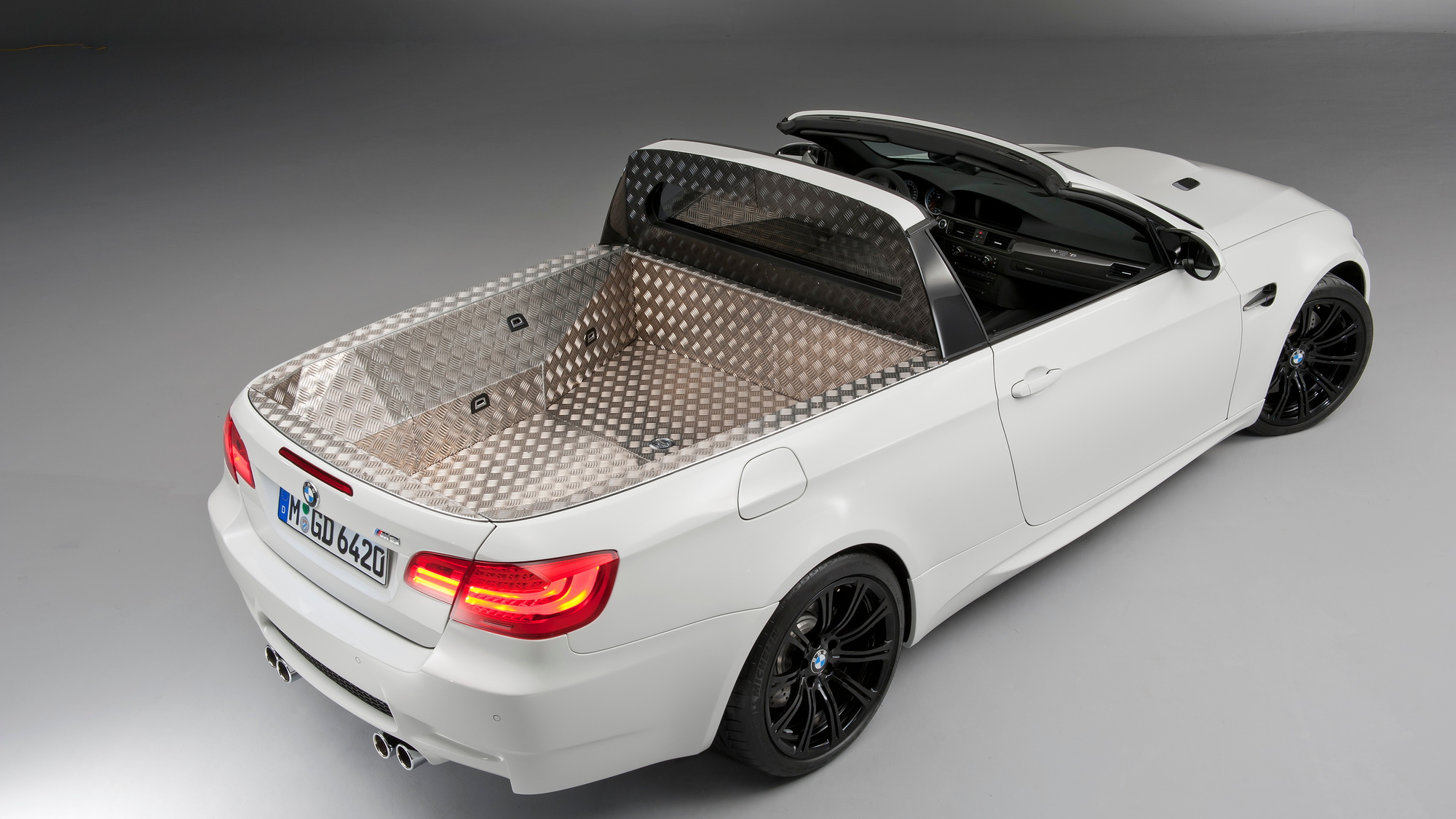 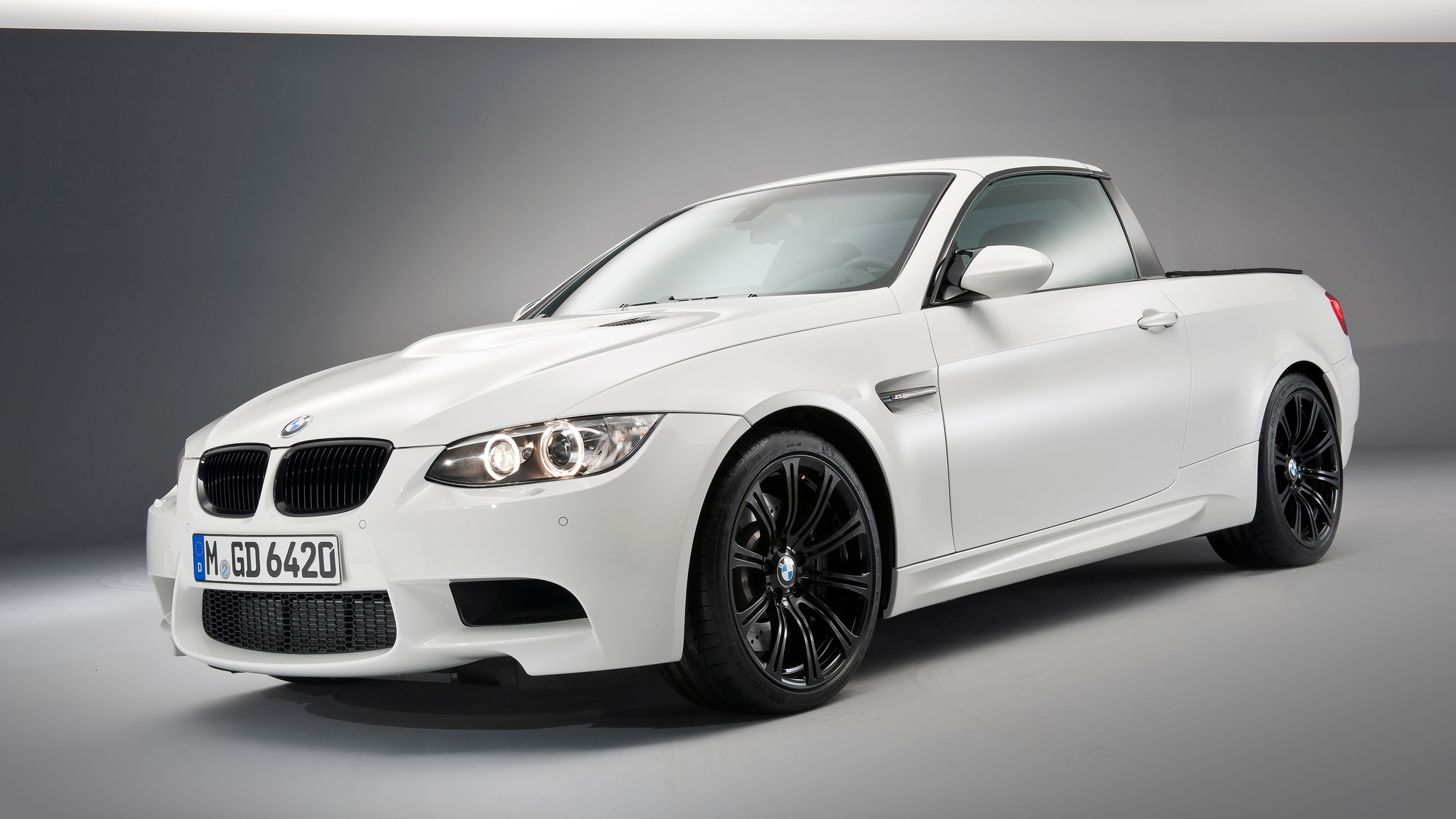 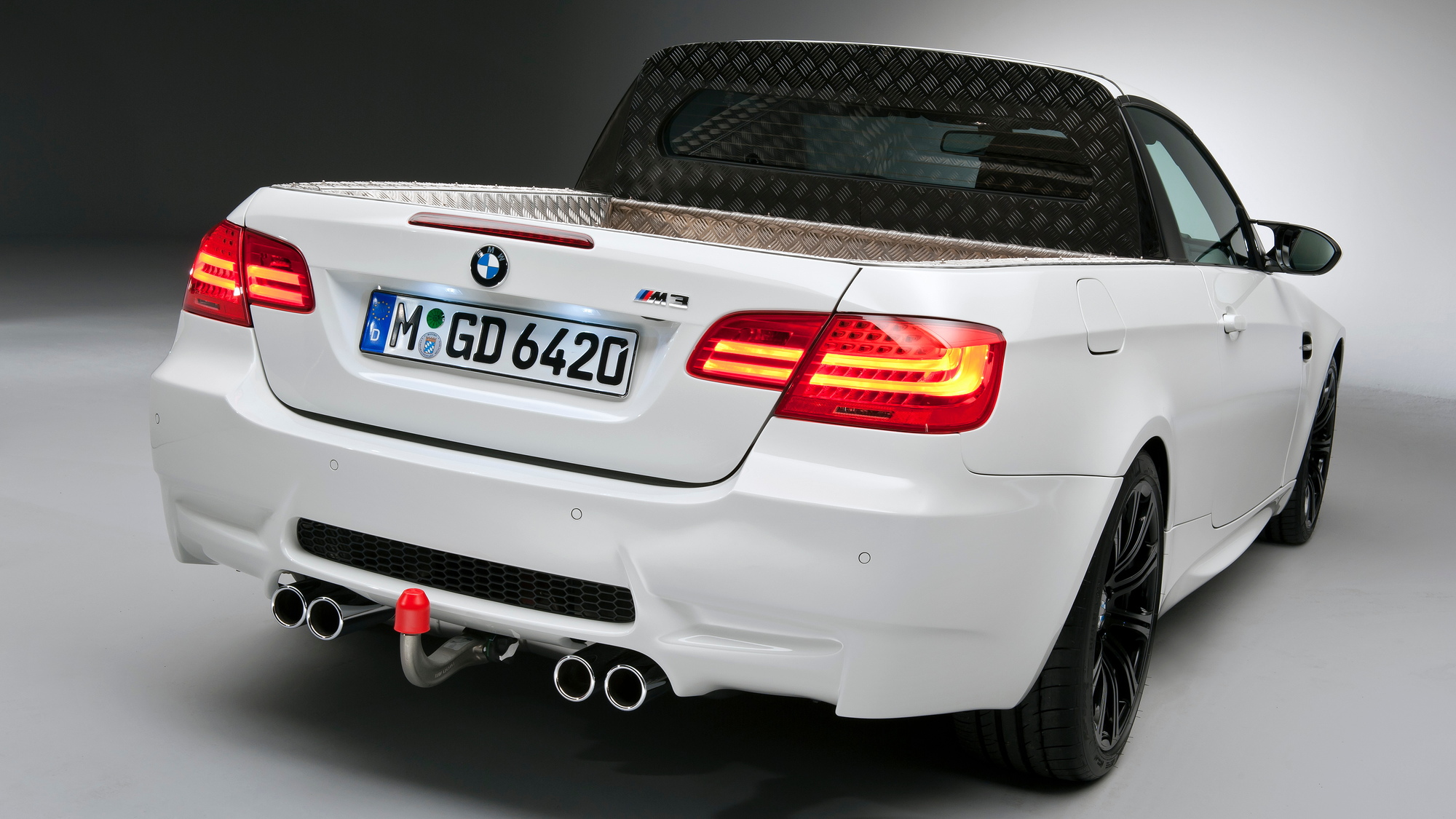 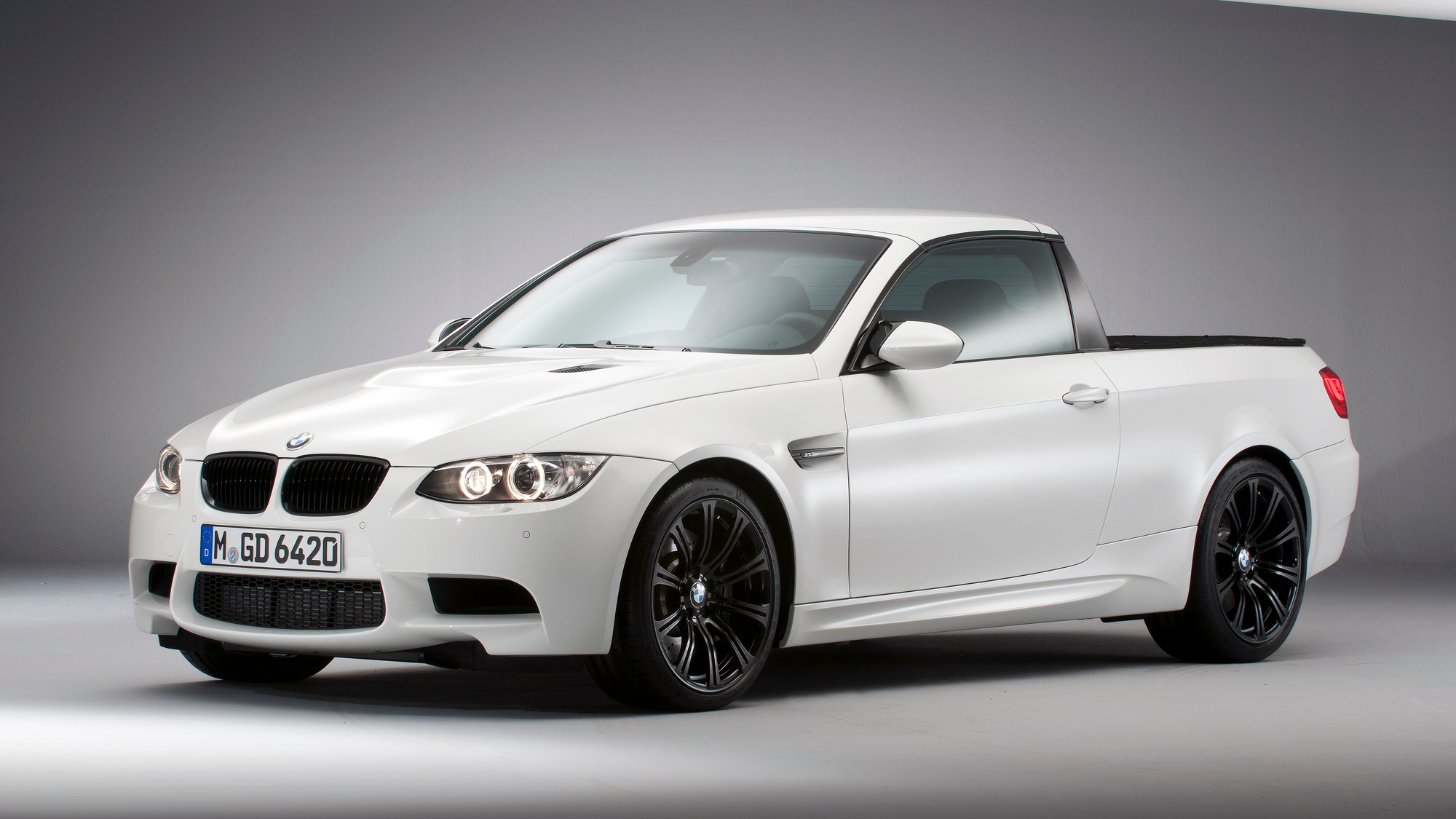 We've already seen BMW's early April Fool's Day joke, and the but today the company made the not-so-surprising (or funny) official revelation. Despite the anti-climactic nature of the unveiling, we still want one. Like, now.

Does it make sense? Of course not. It's a high-performance sport truck, or ute as the Aussies more sensibly call vehicles of this type. It has a removable top. It has a diamond plate bed. It's silly, but it's awesome.

Rated at about 900 pounds load capacity and packing 420 horsepower, this is the Bimmercamino we've always wanted, but will unfortunately never get, barring a surprise Warren Buffett bequest or a Powerball win.

Hit page two for the full release, although the gallery tells you everything you really need to know.

01.04.2011Press Release
Munich. Following the BMW M3 Coupé, BMW M3 Convertible and
BMW M3 Sedan, a fourth body variant of this globally successful high-performance sports car is about to cause a stir. Under the strictest secrecy, the world’s first high-performance pickup has been created at the BMW M GmbH development centre. The sportiest example by far in this vehicle category, the BMW M3 Pickup will fire the imaginations of all motorists with a deep appreciation of top performance matched by a keen practical bent. 309 kW/420 hp under the bonnet and a rear-axle load capacity of up to 450 kilos take the hallmark
BMW M relationship between race-oriented driving pleasure and everyday utility to an entirely new level. This unique vehicle has already completed extensive test and set-up drives on the Nürburgring’s Nordschleife in advance of its global unveiling on 1 April 2011.

With this vehicle, BMW M GmbH once again furnishes evidence of its exceptional competence in developing and building high-grade, individual dream cars. With a high-revving V8 engine at the front, a generously sized load area behind and a removable Targa roof above, driver and passengers in the BMW M3 Pickup will relish an unprecedented take on the familiar M feeling. Yet this spectacular new development is unmistakably recognisable as a member of the BMW M3 model family. Corroborating this kinship are not just the inimitable power of the engine, but also fine-tuned aerodynamics and a tailored suspension set-up. Measurements in the wind tunnel at the BMW Group’s Aerodynamic Test Centre showed a Cd factor on a par with that of the BMW M3 Coupé. Like every
BMW M model, the BMW M3 Pickup has also demonstrated its dynamic potential on the North Loop of the Nürburgring. Official lap times have not yet been released, but the needle in the dial vouched for a top speed of 300 km/h.

The kerb weight of the world’s fastest pickup undercuts that of the
BMW M3 Convertible by around 50 kilograms. Removing the Targa roof shaves off a further 20 kg while at the same time lowering the car’s centre of gravity. This most unusual experience of top-down driving pleasure in a BMW M3 thus goes hand in hand with further optimised dynamic handling.

The practical features of the BMW M3 Pickup are no less impressive. Maximum load capacity has been raised to 450 kilograms. The load bed of the
BMW M3 Pickup is clad in high-grade structured aluminium sheeting and provides the biggest cargo capacity ever offered on a BMW M vehicle. In terms of the unit of measurement generally applied to premium automobiles, that gives the loading area of the BMW M3 Pickup the capacity to carry up to 20 standard 46-inch golf bags. What’s more, the BMW M3 Pickup is the first BMW M3 variant in the
25-year-plus history of this model range to come with a trailer tow hitch.

Notwithstanding these unquestionable stand-out qualities, the BMW M3 Pickup will not be heading for the golf course or series development, but will retain its status as an exclusive one-off. It is earmarked for use as a workshop transport vehicle for BMW M GmbH. With this in mind, the current BMW M3 Pickup – unlike a similar predecessor built back in the 1980s – has gone through the requisite procedures to earn its road certification. Which makes it officially a truck – but one that puts a whole new spin on the meaning of the word.