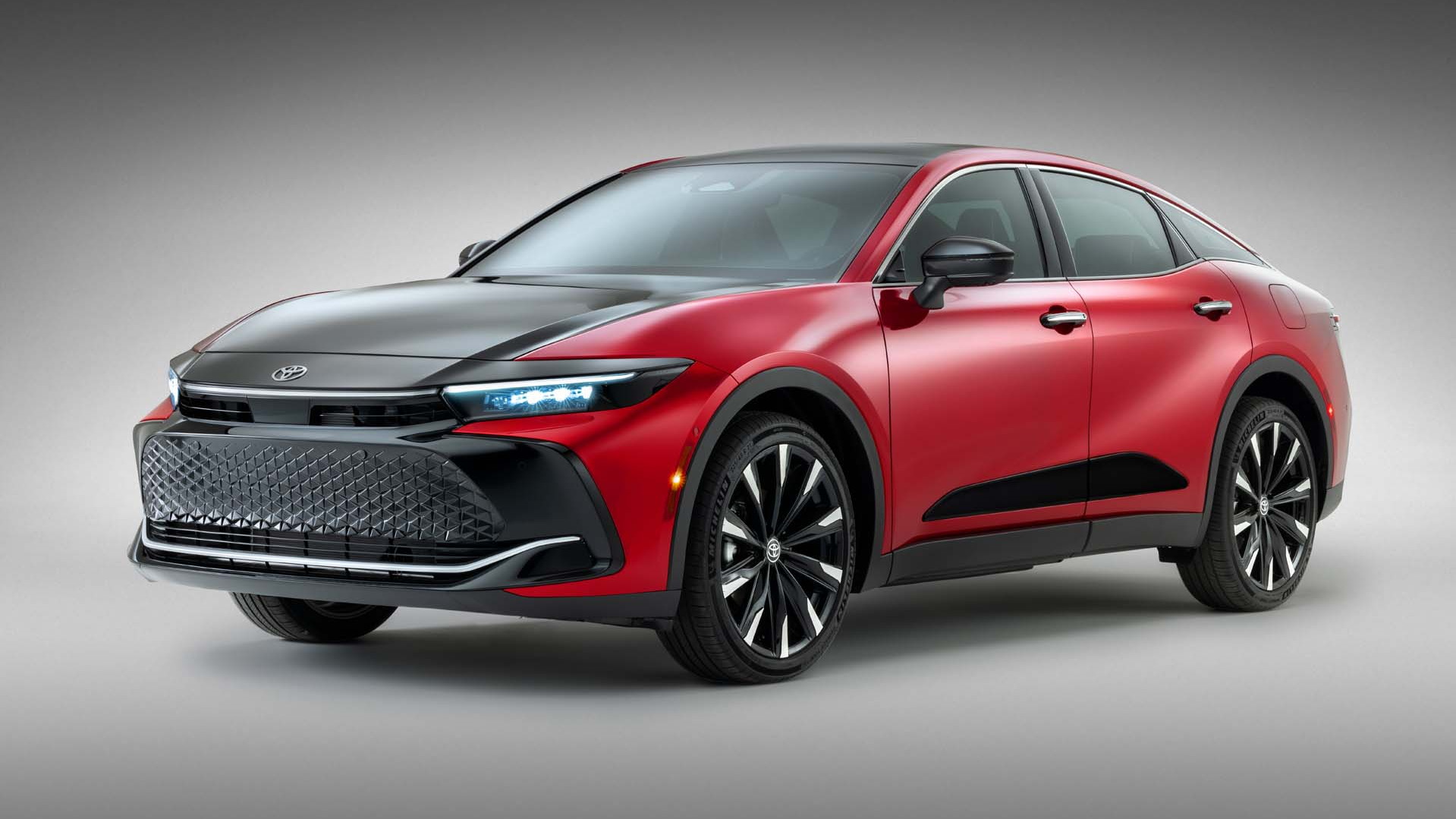 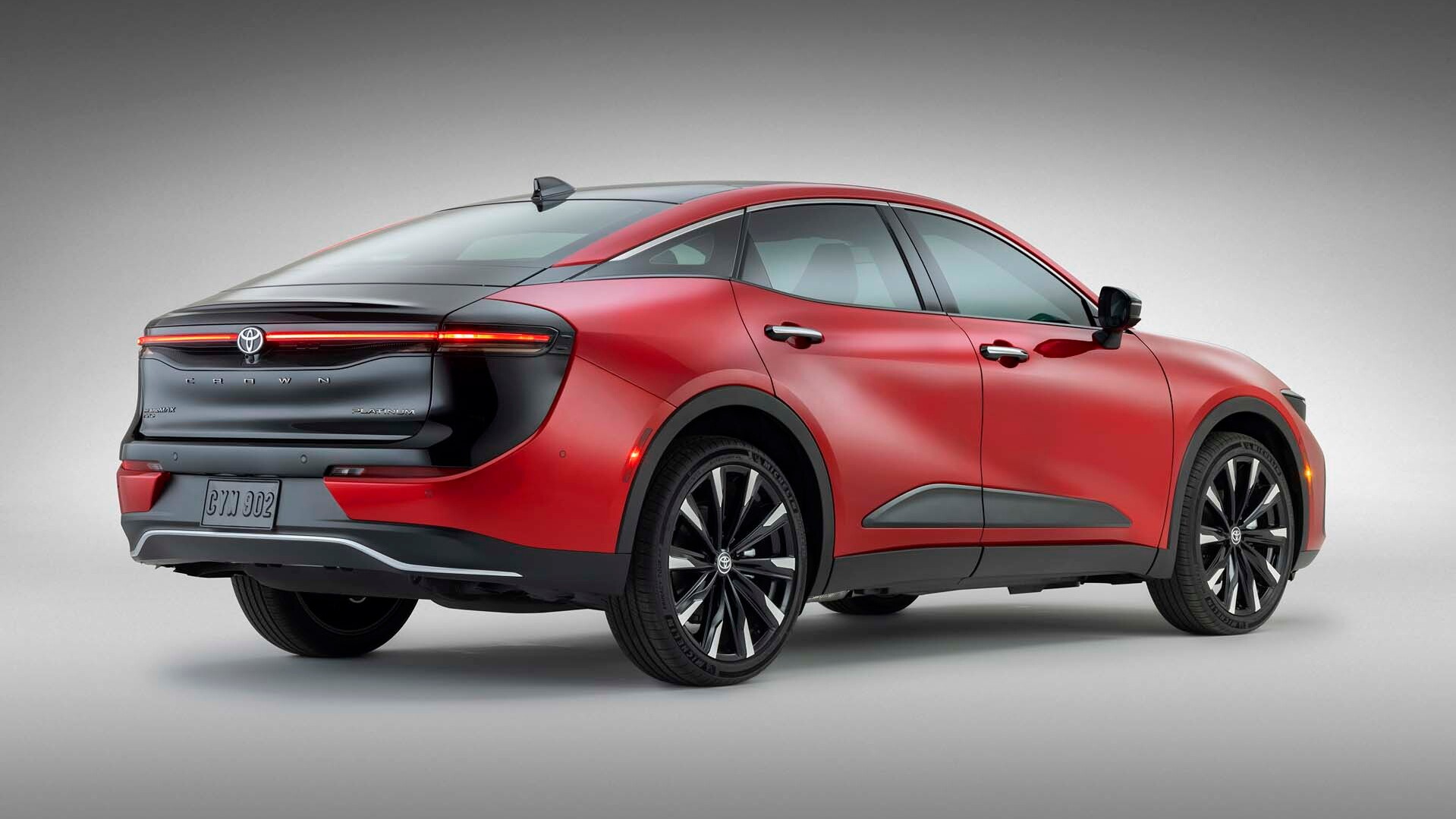 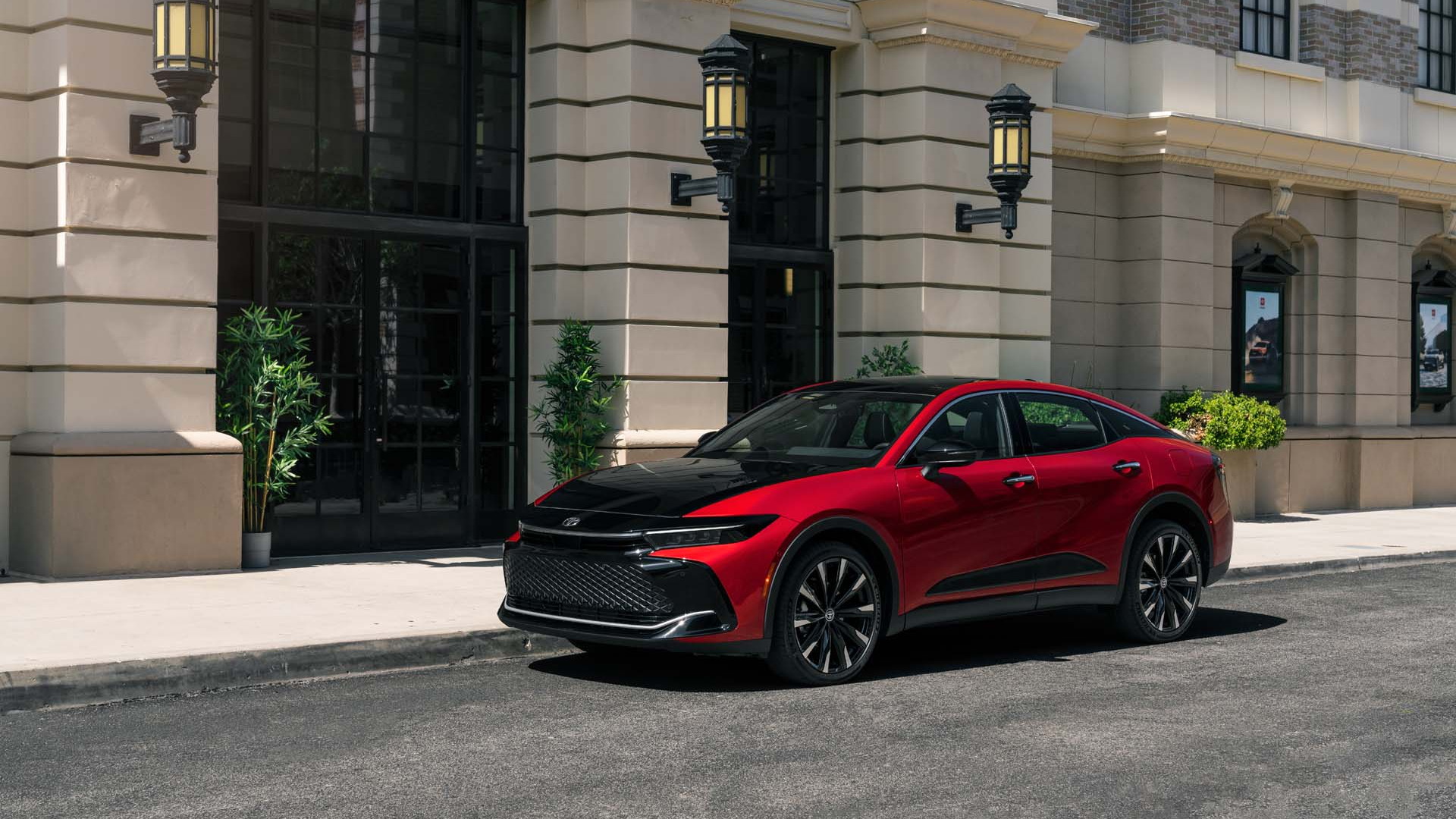 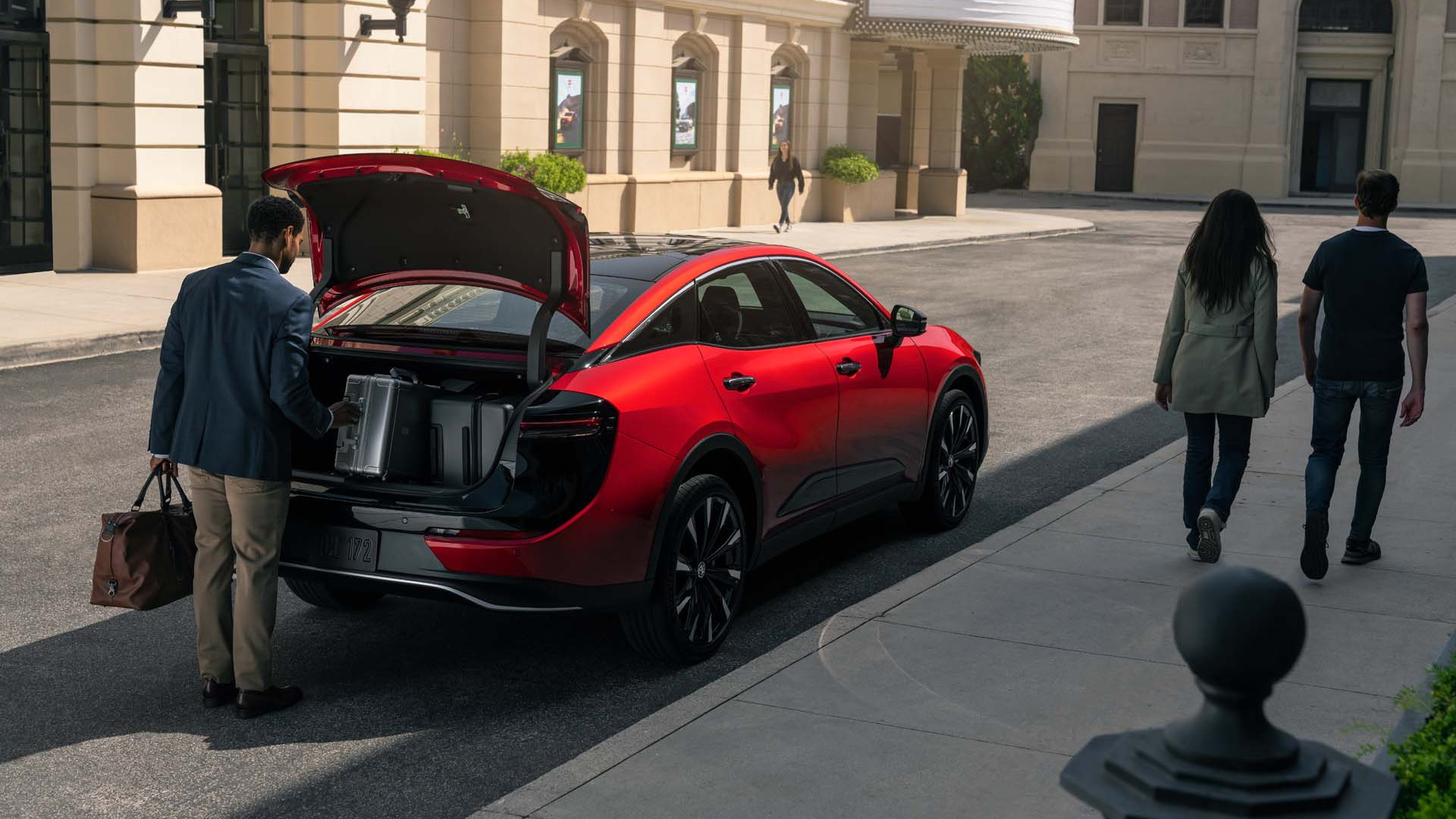 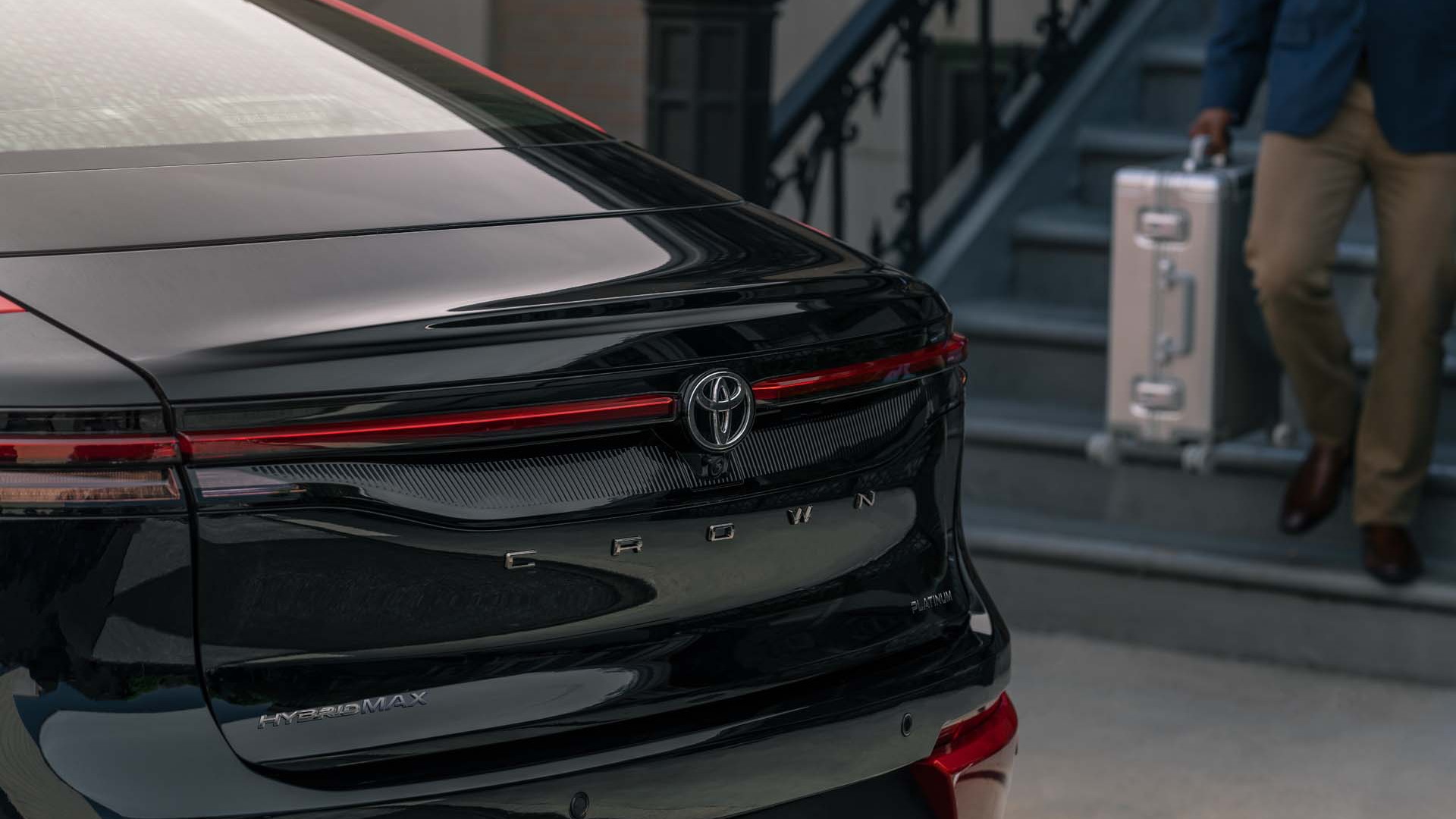 The sedan is dead. Long live the sedan!

Just as the Toyota Avalon dies comes the a replacement with a twist. On Friday, the 2023 Toyota Crown debuted with the ride height of a crossover, the proportions of a full-size sedan, and a pair of hybrid powertrains. Consider it an Avalon for a new generation.

Every Crown will feature a hybrid powertrain and all-wheel drive. The base system in XLE and Limited models pairs a 2.5-liter inline-4 with front and rear electric motors, though Toyota hasn't said yet how much power the system produces. The all-wheel-drive system will be capable of varying torque between 100/0 and 20/80 front to rear. Fuel economy estimates reach 38 mpg combined, which is significantly higher than the outgoing AWD Avalon's 28 mpg combined. Drive modes will include Eco, Normal, Sport, and an EV setting that enables short periods of all-electric driving.

Fancy Platinum models get a 2.4-liter turbo-4 mated with two electric motors for a total system output of 340 hp. Paired with a 6-speed automatic transmission, this grade is estimated to achieve only 28 mpg combined. Those electric motors can vary the torque split between a 70/30 front bias and 20/80 rear bias. The turbocharged powertrain loses the base car's EV drive mode, but gains Sport+, Comfort, and Custom modes.

While the Crown might not be a reskinned Avalon it sure feels like it could be. Based on Toyota's New Global Architecture (TNGA-K), the Crown sports a 112.2-inch wheelbase, 194-inch overall length, and 72.4-inch width that all nearly match up to the full-size sedan's dimensions in all but one category: height. The Crown is 60.6-inches tall, which is about four inches higher than both the Avalon and Camry. Toyota won't discuss ground clearance yet, but spokesperson Paul Hogard told Motor Authority it's comparable to the Camry. The Camry has 5.7 inches of ground clearance while the outgoing Avalon had 5.3 inches of ground clearance.

The MacPherson front struts pair with a multi-link rear independent suspension. Lower-level XLE and Limited trims will ride on 19-inch wheels while high-zoot Platinum models pair adaptive dampers with 21-inch wheels. Those large wheels will be an option on the Limited with the Advanced Tech Package.

Bridging the gap between the first-generation Venza crossover SUV and Avalon, the Crown blends together Toyota's latest design language with a fastback shape. It might look like a hatchback but it's a sedan with a trunk. It falls just short of elegant and falls squarely in the "it won't offend anyone" camp. Platinum models will be available with two-tone paint.

Toyota said pricing will be announced closer to the Crown's arrival in dealers later this year and will be built in Japan.