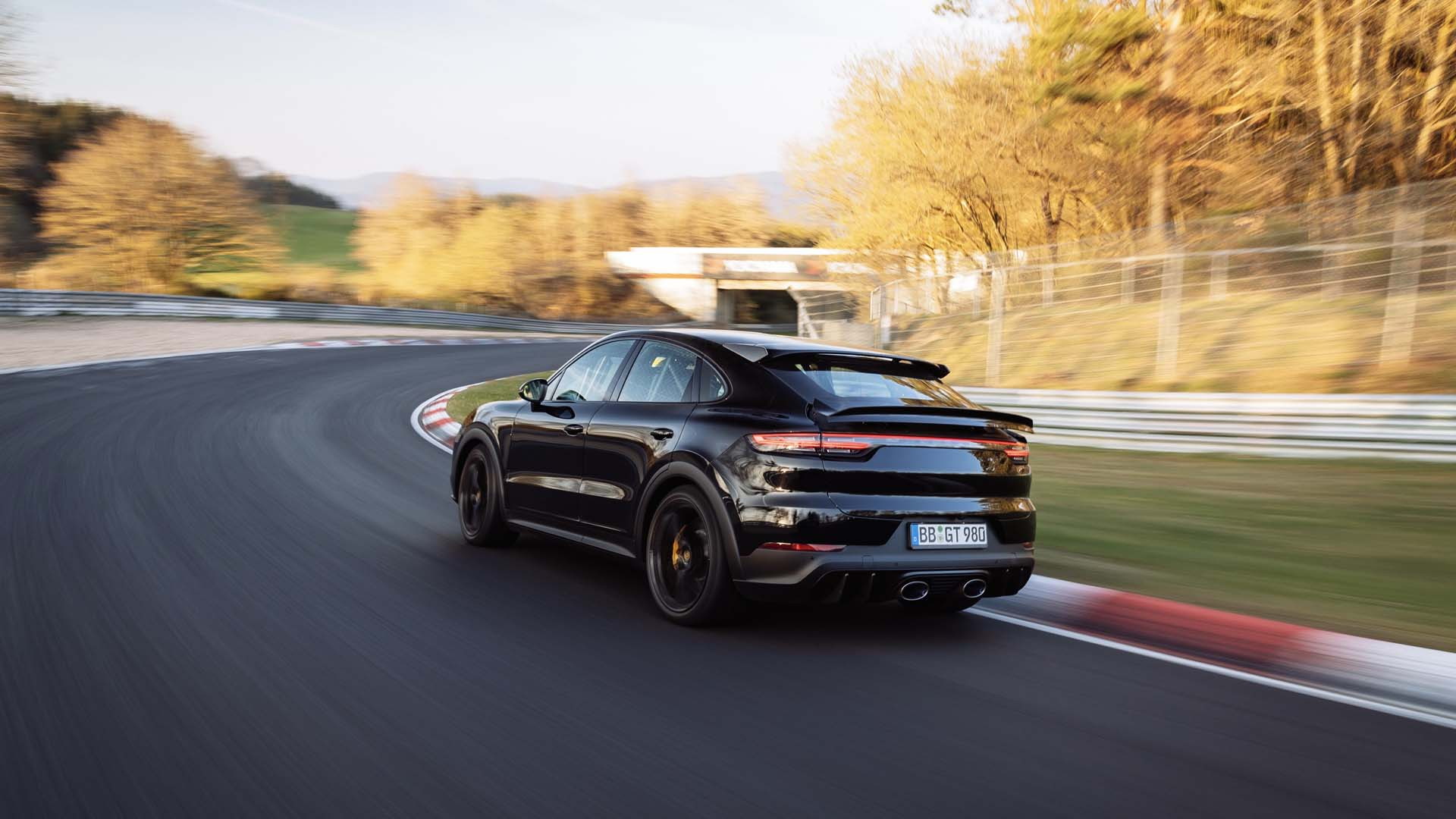 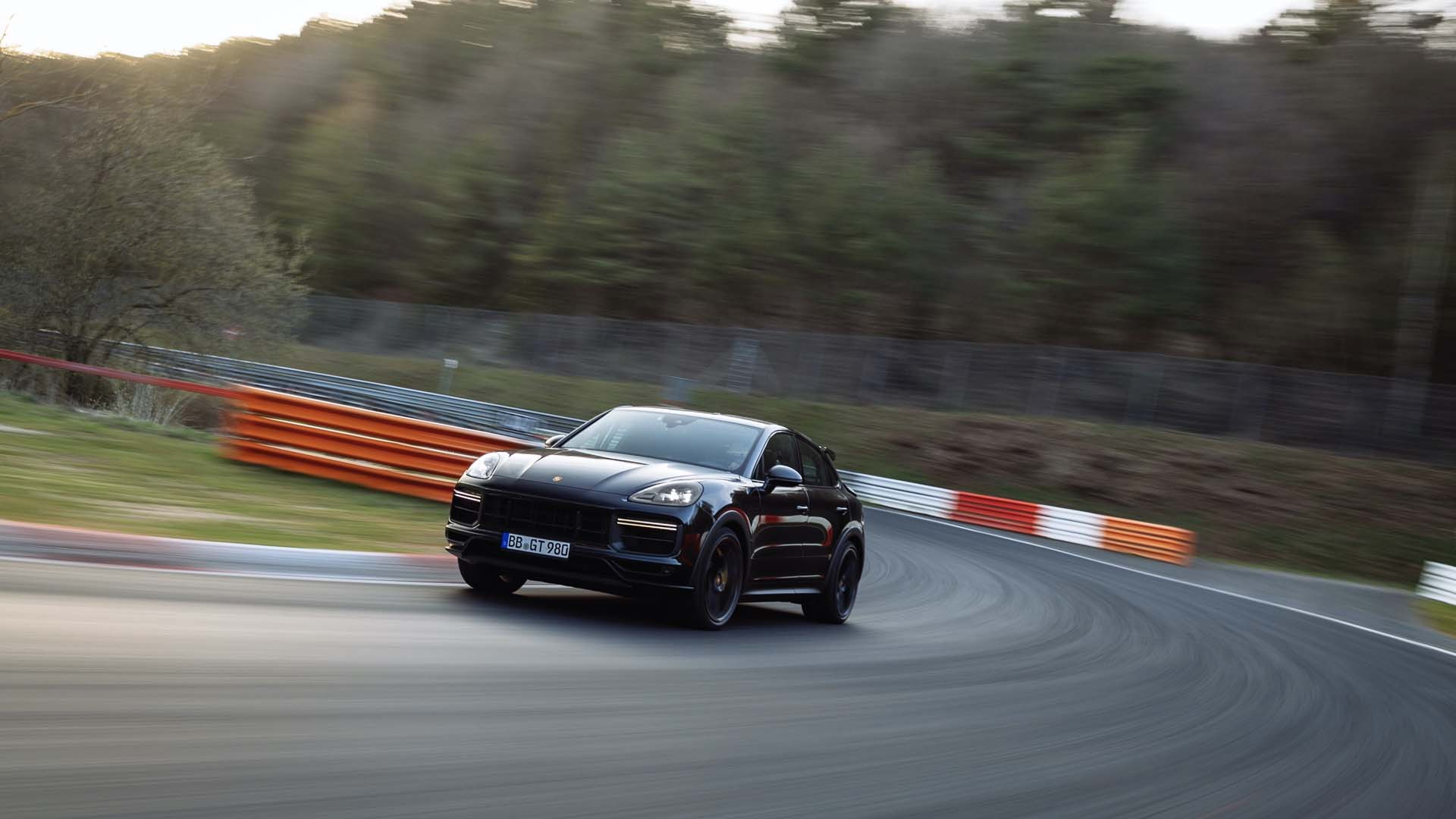 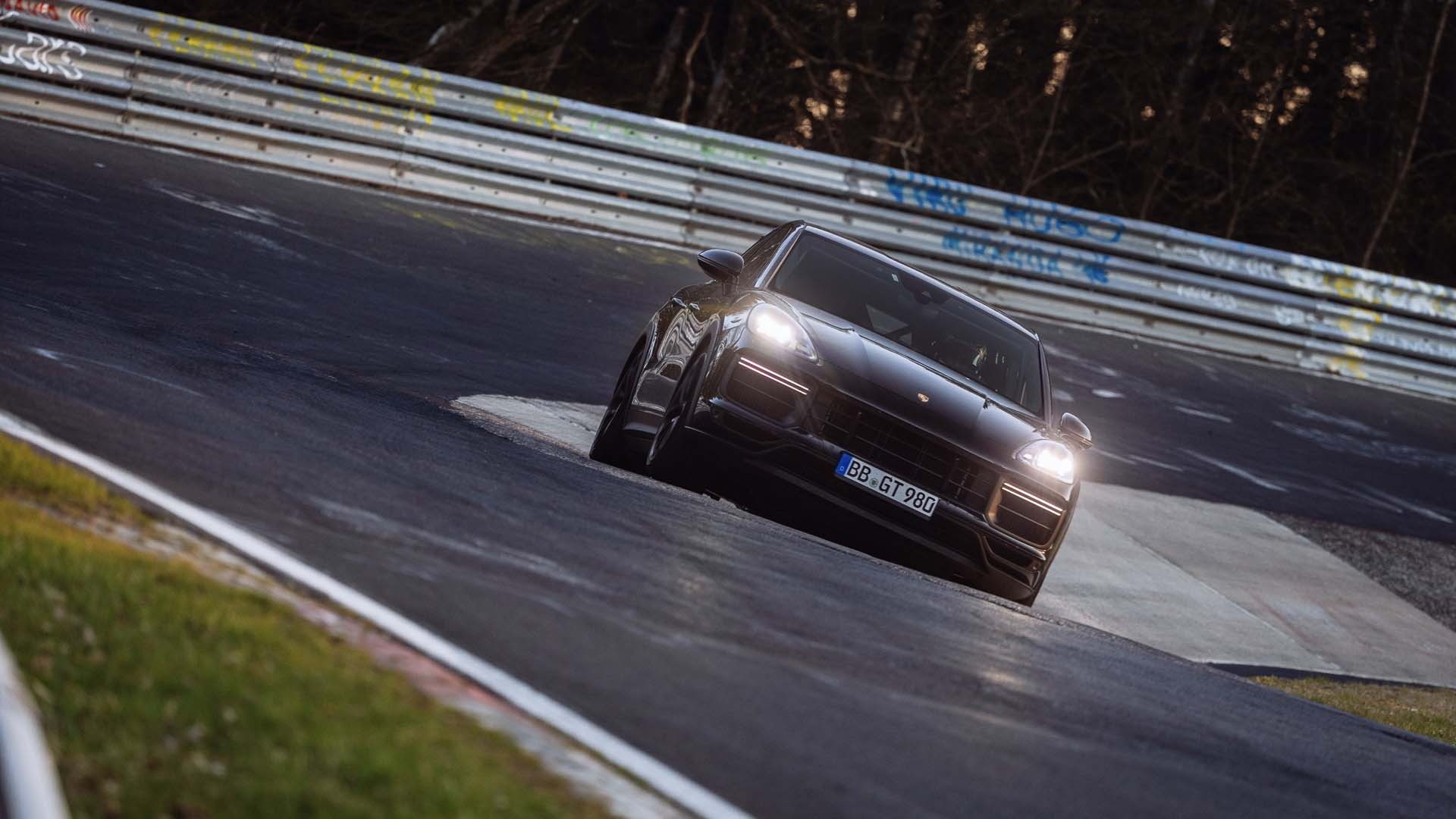 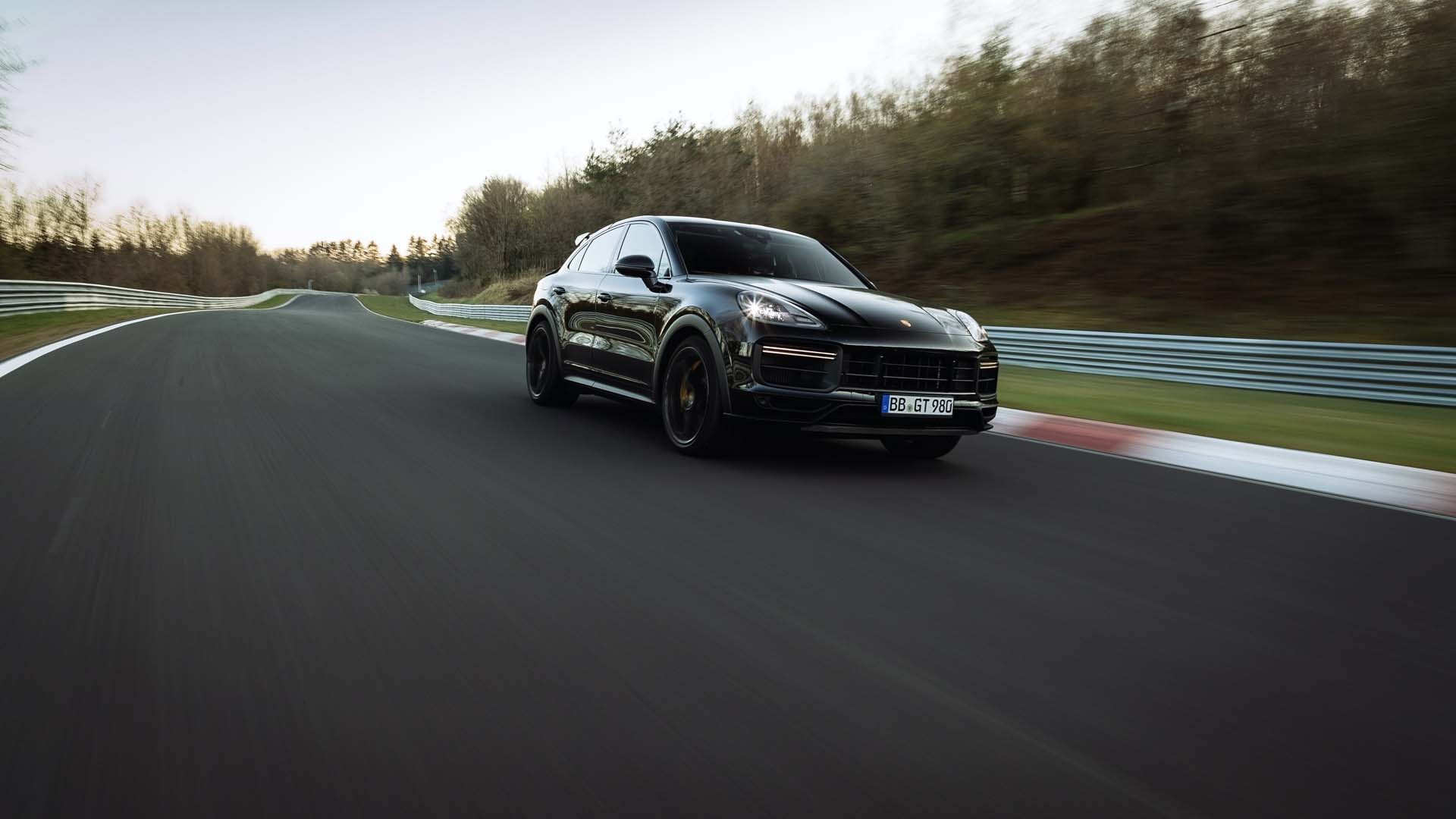 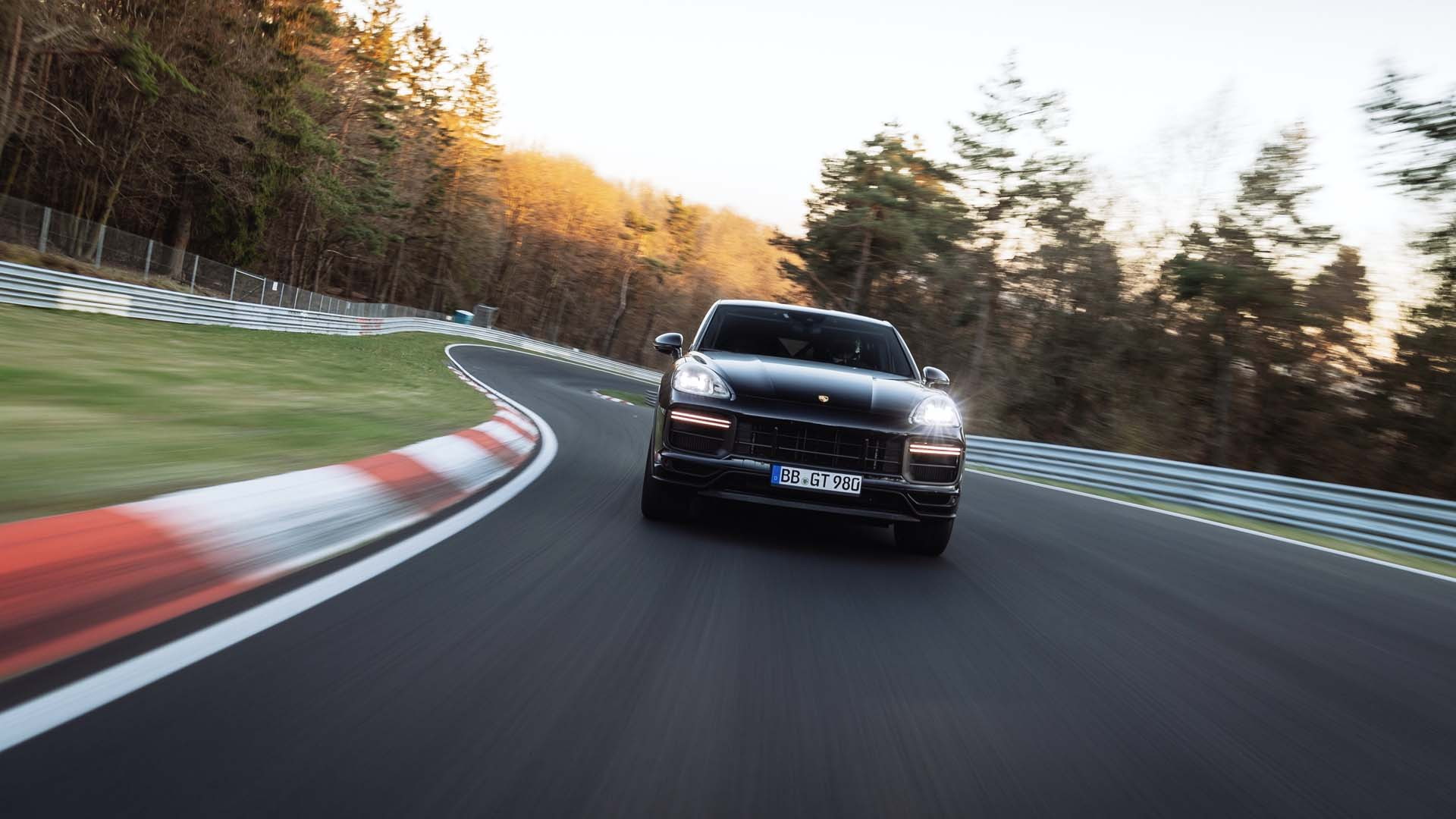 On Wednesday the German sports car maker announced that the as yet unnamed high-performance Cayenne Coupe variant set a lap record for the SUV, off-road vehicle, van, pick-up category.

A lightly camouflaged series production car piloted by Lars Kern lapped the Nürburgring in 7:38.925 minutes at 11:31 am on June 14 with an outside temperature of 73 degrees Fahrenheit and a track temperature of 115 degrees. The lap was certified by a notary. The only modifications to the Cayenne Coupe that won't be on the production car were a racing seat and roll cage to protect the Kern. The record run was achieved on 22-inch Pirelli P Zero Corsa tires developed specifically for this model, which will be standard.

"Its high steering precision and stoically stable rear axle gave me a lot of confidence in the Hatzenbach section," Kern said.

A lot of vehicles have the wheels leave the ground at Pflanzgarten I and II crests on the 'Ring, but the Cayenne Coupe's wheel travel kept the large crossover SUV solid and controlled with the wheels never leaving the pavement according to Kern.

Porsche hasn't yet released full performance or powertrain details for this new Cayenne Coupe model, but it has confirmed it will have over 600 hp. It'll sing through a titanium exhaust system with centrally mounted dual exhaust tips. Porsche said its 0-60 mph sprint is expected to be in the same range as the 992 GT3 with the PDK. For reference, the 992 GT3 with the PDK can run 0-60 mph in 3.2 seconds.

Legendary race car driver Walter Röhrl drove a prototype and said it felt like “you are sitting in a compact sports car rather than in a large SUV.”

This model will be more than just extra power. Multiple chassis modifications including an updated PDCC anti-roll system is expected along with wheels and tires that are 0.5 inches wider than what's on the Cayenne Coupe Turbo. Negative camber will be increased by 0.45 degrees, which will enable a larger contact patch to enable more grip for the Corsa tires.