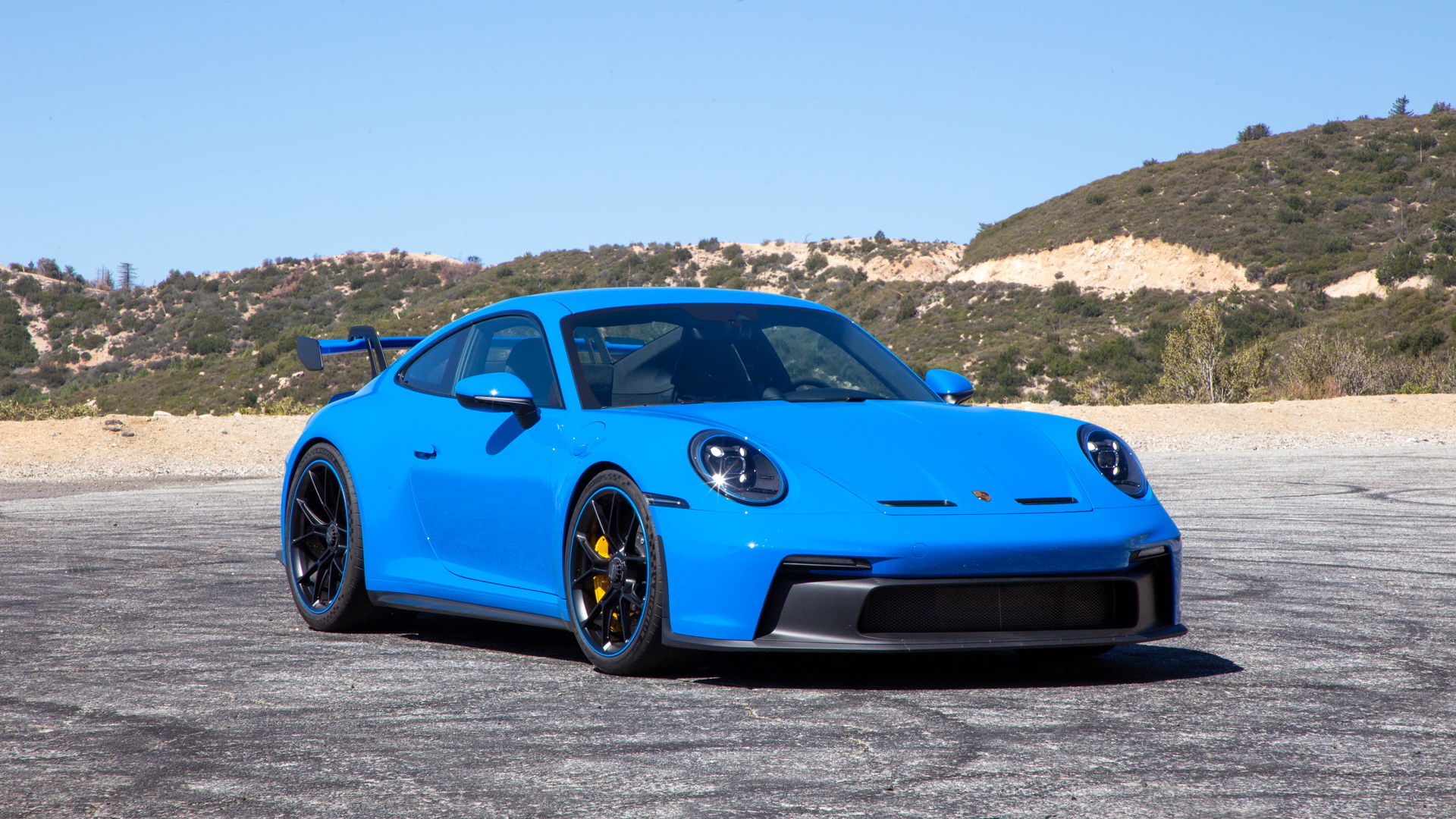 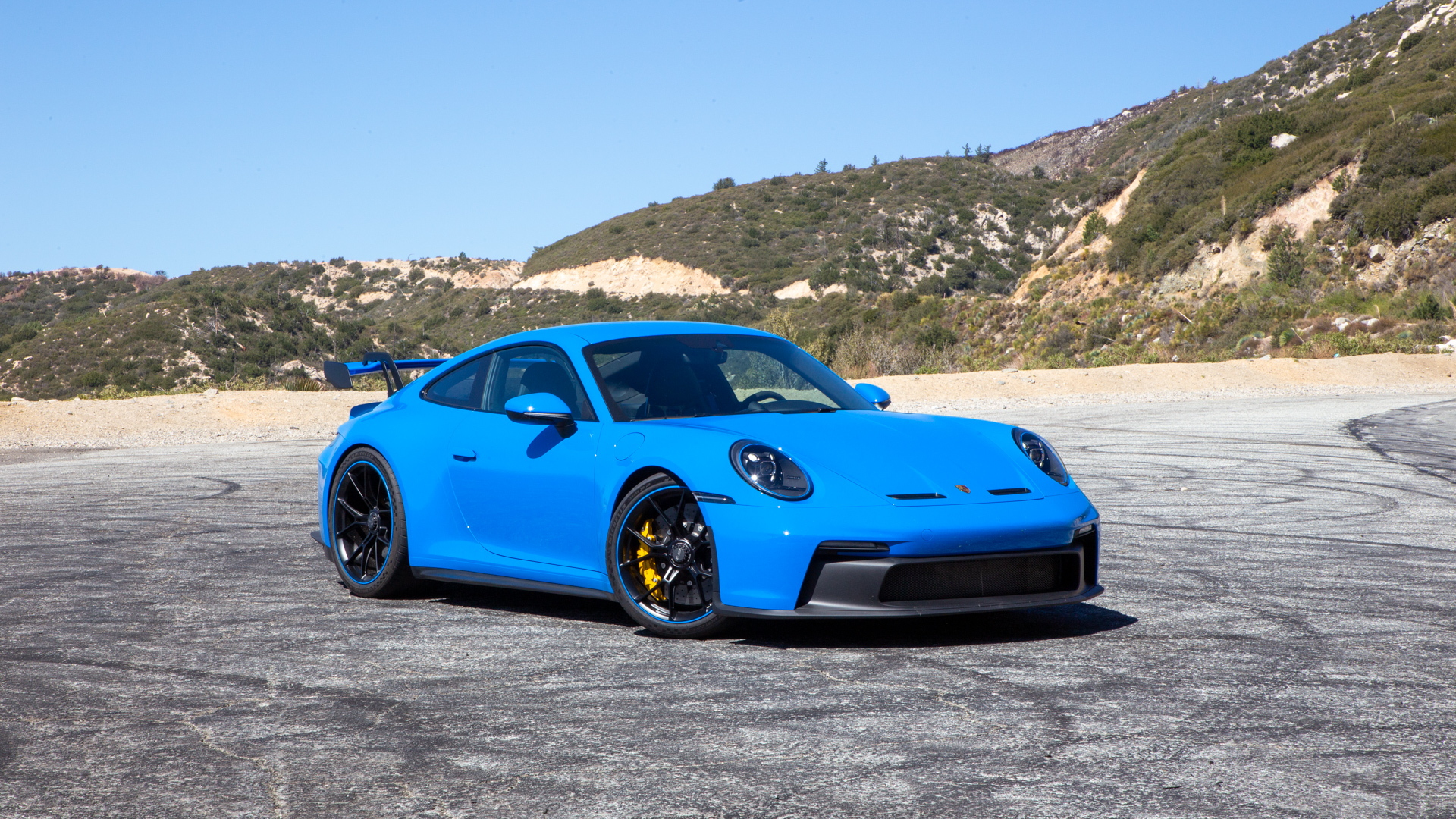 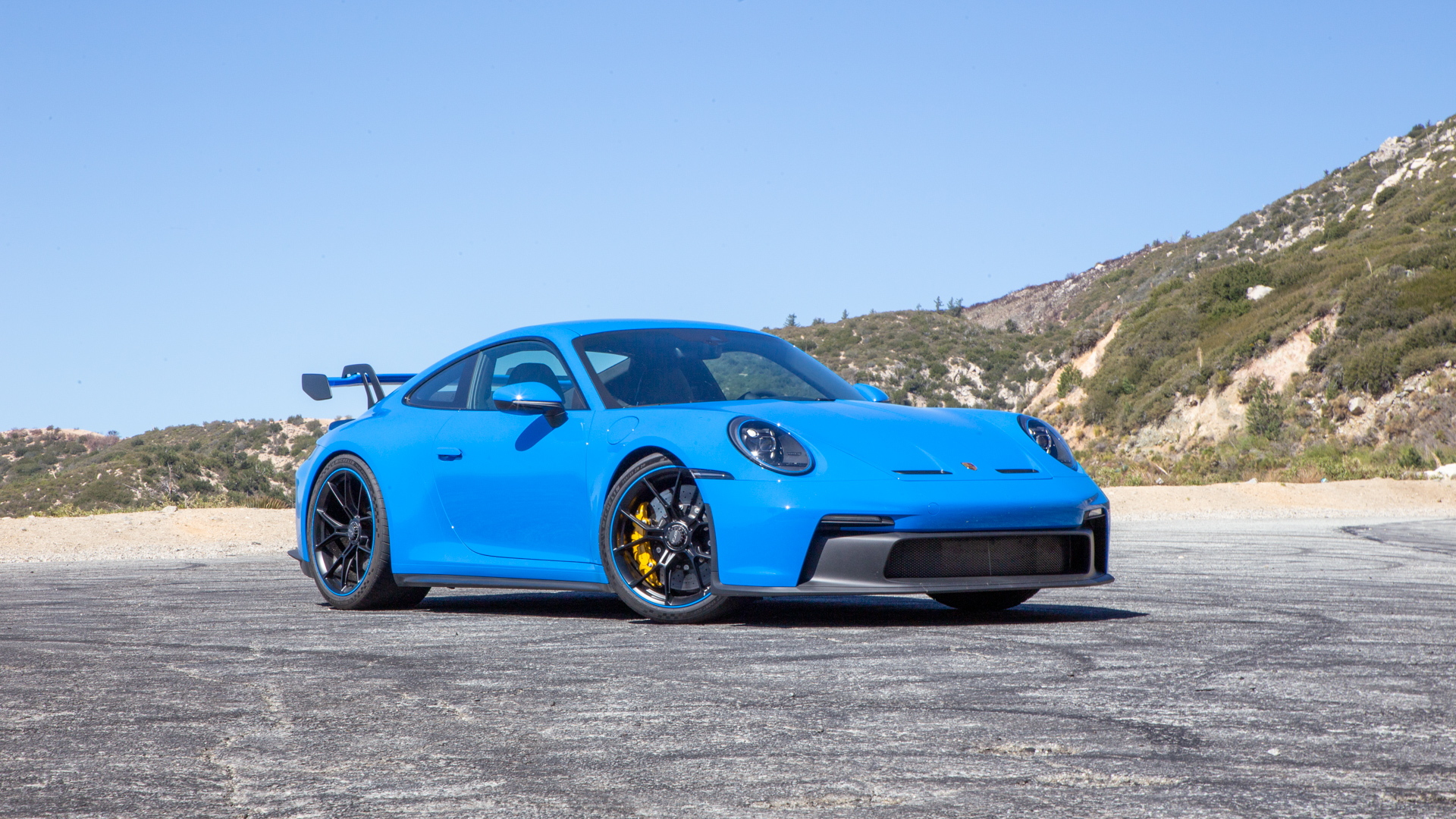 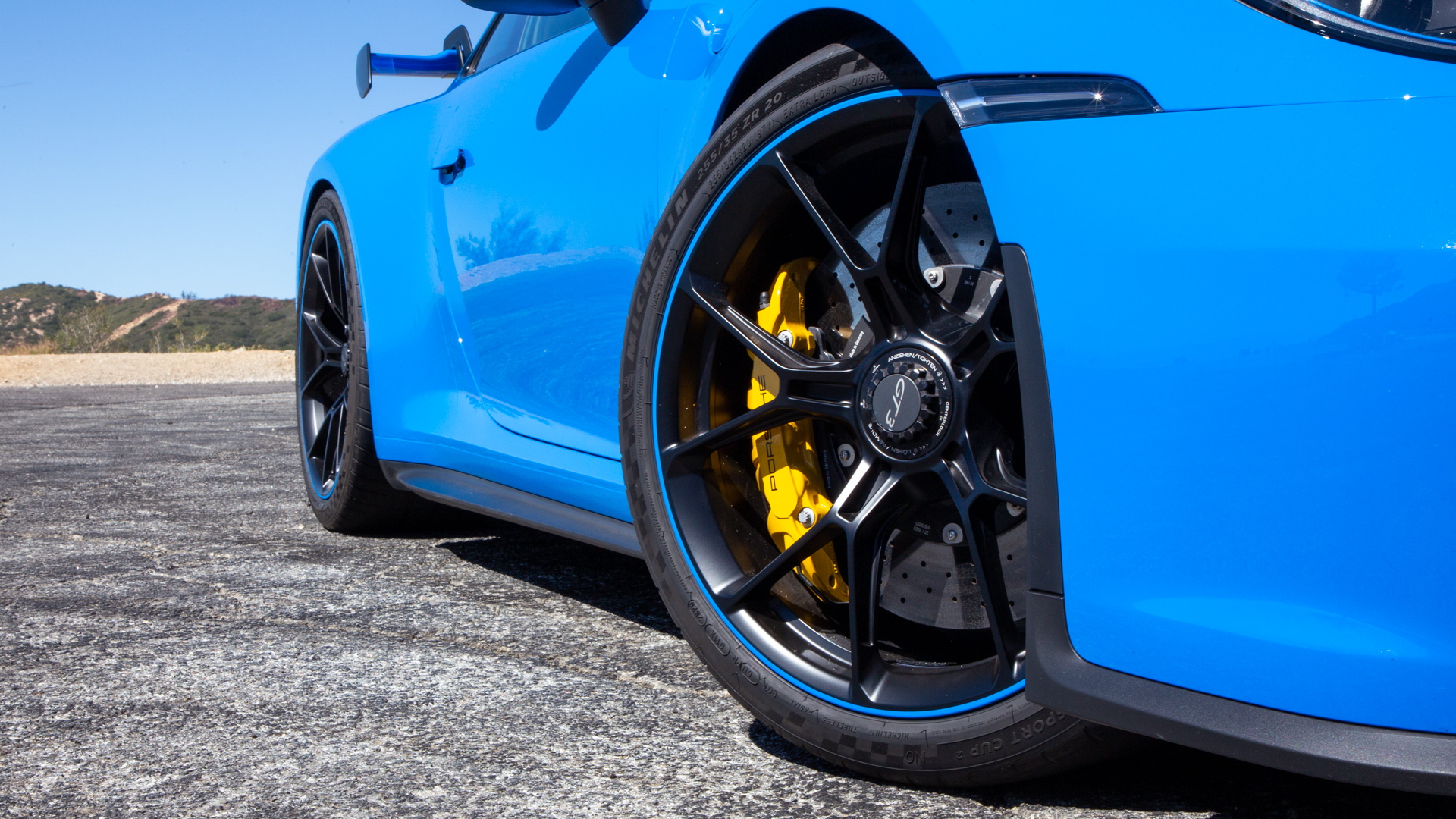 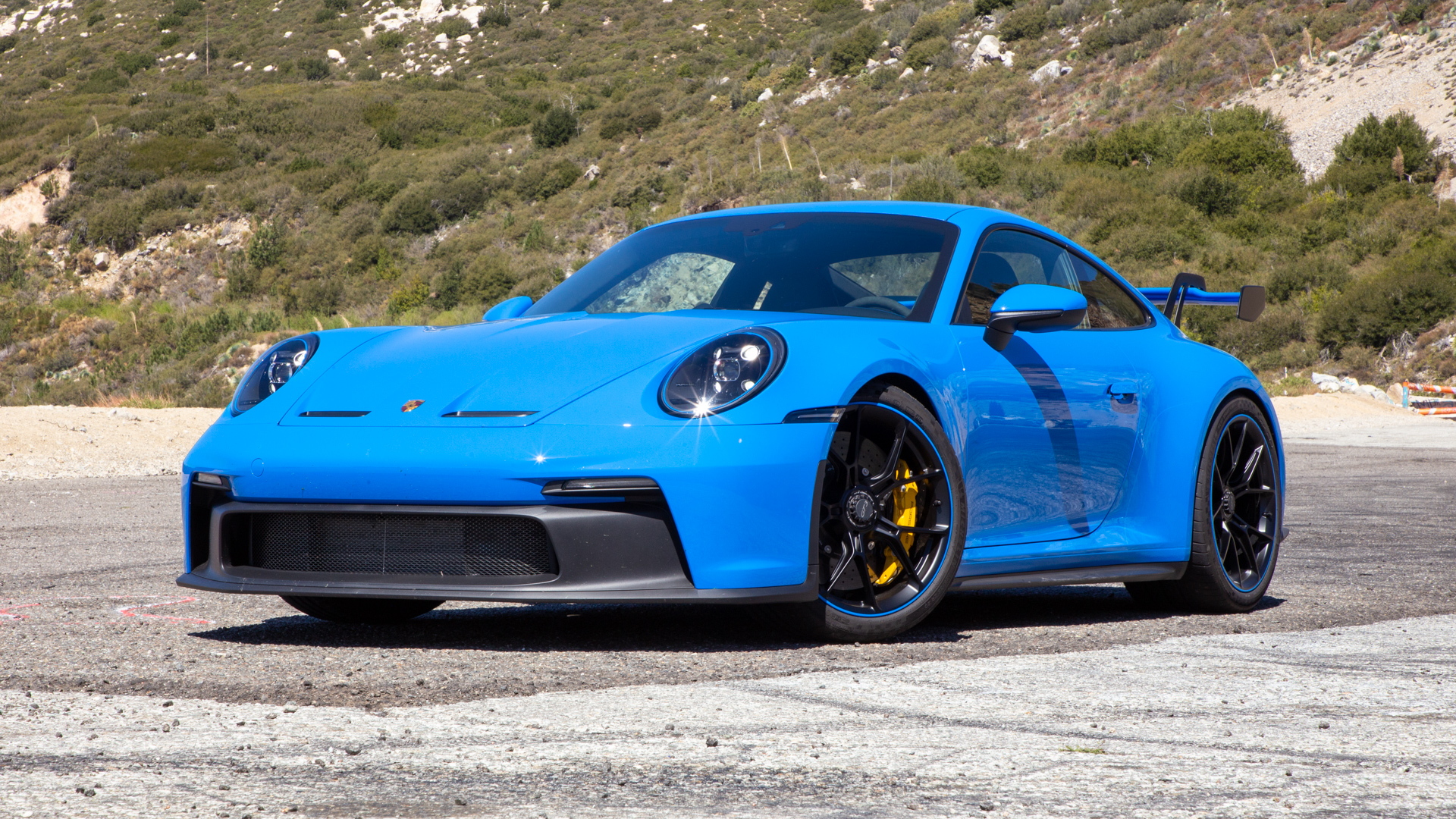 I was afraid the same would be true of the 2022 911 GT3, which finally joins the 992 generation. That would be a shame, the GT3 is supposed to be the driver’s car of the bunch, the one that really rewards on the road. A Carrera 4S can regard winding roads with a yawn, but to see the GT3 go down that route would feel like a loss.

I had one morning with the car to find out, so I took it up my favorite road: a mountain highway northeast of Los Angeles that dead ends after about 15 miles and sits untouched on weekdays. That gave the car plenty of room to stretch its legs.

Direct evidence of the new GT3’s performance bona fides are found in its impressive Nürburgring time. It circles the ’Ring in less than 7 minutes, 6:55.2 to be exact, which is 17.5 seconds quicker than the previous GT3 and even narrowly beats the times of the last-gen GT3 RS and the 918 Spyder.

Trying to make sense of the new 911 GT3’s absurd ’Ring time though the spec sheet is difficult. How could a car that didn’t really add power or take off much weight shave more than a second per mile off of the time put up by the old car? Well, it improved nearly everything else.

The updated body work provides a significant increase in downforce. The adjustable spoiler and front diffuser can flip between street and performance configurations. In the standard street setup, the 911 GT3 has 50% more downforce, but putting the parts into their most aggressive posture results in 150% more downforce.

Wider tires are also a factor. The offset 20-inch front wheels and 21-inch rear wheels have both grown by 0.4 inch, improving grip.

Those updates all inch the needle forward on the GT3’s performance apex, but the biggest change (and the one you’ll feel the most on the road) is to front suspension. For the first time, a double-wishbone front axle comes standard on a 911 production car, this one adapted from the suspension of the 911 RSR Le Mans car. It adds a needed dose of lateral stability to the GT3’s front end and unites the whole car in a way the outgoing model needed.

Porsche still paid close attention to the GT3’s weight. Even though the new 911 is longer and wider than its predecessor, it’s only gained 11 pounds. Weight has been yanked out of nearly every portion of the car, thanks to additional carbon-fiber-reinforced plastic for various body parts. Sound deadening material and the rear seats have been yanked out, the glass is thinner all around, and 22 pounds have been trimmed out of the exhaust. The GT3 even opts for a 7-speed PDK over the 8-speed PDK unit found in the other 911s, which saves another 44 pounds. Curb weights sit at 3,164 pounds for the PDK model and 3,126 pounds with the 6-speed manual.

My test vehicle was further outfitted with two options that shave off even more weight: carbon-ceramic brakes ($9,210) and carbon-fiber bucket seats ($5,900), which shave 39 and 33 pounds, respectively. Porsche says more than half of GT3 buyers pick these two particular options.

There are times when changes like these to improve a car’s performance at the limit don’t translate to the street, and that’s  what I feared with the GT3. Sure, it can circle the Nürburgring a lot quicker in the hands of a professional, but will it feel different to an enthusiast on a canyon road? I was delighted to find that these changes both push the GT3’s envelope to new heights and make it more fun to drive on weekend jaunts.

The front suspension change has done wonders. It’s the most noticeable update to the car’s performance. The older 911 GT3 felt similar in terms of straight-line speed, but you had to be very careful when rolling onto the power coming out of a corner. The additional lateral stability of the new setup solves this problem. The nose felt so planted I could get onto the gas earlier and launch out of corners with more confidence. Turn-in sharpness is much improved, and pulling weight out of the engine and exhaust system in the rear makes the car feel less nose-light and more evenly balanced.

Steering feel is spot on. There’s plenty of feedback from the wheel and the weight is perfect, Porsche has nailed its electromechanical setup in a way that other automakers haven’t dialed in yet. The variable steering ratios are predictable, and it let me put the GT3 right where I wanted in each corner.

Still, the 911 GT3 demands to be approached with respect for its capabilities. With more than 500 hp and an engine hanging over the rear axle, some caution is wise.

The engine may not have much more power, it makes 502 hp and 346 lb-ft of torque (modest gains of 2-hp and 7 lb-ft over the outgoing car), but that’s fine. It still delivers plenty of punch, and its naturally aspirated rasp is even more intoxicating with thinner glass that allows in more sound. The 4.0-liter flat-6 is the same engine found in the 911 GT3 cup car. It doesn’t redline until 9,000 rpm and delivers power differently than the turbocharged engines found in the rest of the 911 lineup. Full horsepower doesn’t kick in until 8,400 rpm and torque until 6,100 rpm and while power delivery at low rpms is still satisfying, you really have to let the engine wind out to get its full kick. The good news is that PDK allows for this, especially in its most aggressive Track setting.

My test vehicle came with the PDK and I was happy to have it. The take rate on the manual runs at 70% in the U.S. and I understand why, but the gap in performance between the two transmissions is wide. The PDK hustles the 911 GT3 from 0-60 mph in 3.2 seconds and that climbs all the way to 3.7 seconds with the manual. I would not begrudge anyone who wants to change their own gears this privilege and it remains a no-cost option from Porsche. But that automatic is just so good it’s hard to pass up. Shifts are instantaneous and it somehow knew what gear to be at all times, like it was reading my mind.

Stamp on the gas from a stop and with the traction control engaged, the computer is smart enough to put all of that power straight onto the road without any kind of launch control. The Michelin Sport Cup 2’s didn’t even chirp, all I heard was the engine wailing behind me as the speedometer climbed.

The 2022 911 GT3 starts at $162,450 (including destination) but it’s rare to find these cars bone stock. My test vehicle added the seats and brakes mentioned earlier, and a few other options that pushed the price tag all the way up to $196,070.

I’d deem the $3,670 front-axle lift system essential. All of that carbon-fiber bodywork up front sits very close to the ground and makes every speed bump or parking lot entrance a geometry problem. Better to lift the front and avoid those dreaded scraping noises. The system is also tied into the navigation as well, allowing you to GPS tag locations where the nose needs to be lifted for added convenience.

The practical side of me thinks that day-to-day life with a GT3 would come with some annoyances. It’s very loud inside, the suspension is stiff even in its most forgiving setting, and climbing in and out is an exercise in agility I should have stretched for (especially with the carbon bucket seats). Those more practical considerations did cross my mind, but I dismissed them almost immediately. The car’s highs are so high that the lows can be forgiven, or forgotten.

My fears were unfounded. The 2022 911 GT3 is the best 911 that I’ve ever tested. It’s more balanced with new-found handling confidence and grip that make it feel more accessible.  offers supercar levels of performance in a package that remains fun even when you’re not driving at supercar speeds. The new GT3 is a visceral experience, with a raucous soundtrack coming at you from behind and G-forces threatening to rip you from the seat as the nose dives into corner after corner. It’s an absolute joy to drive, and after one precious morning with it, I am left wanting more.

Porsche provided a glorious morning in the 2022 911 GT3 for Internet Brands Automotive to bring you this firsthand report.