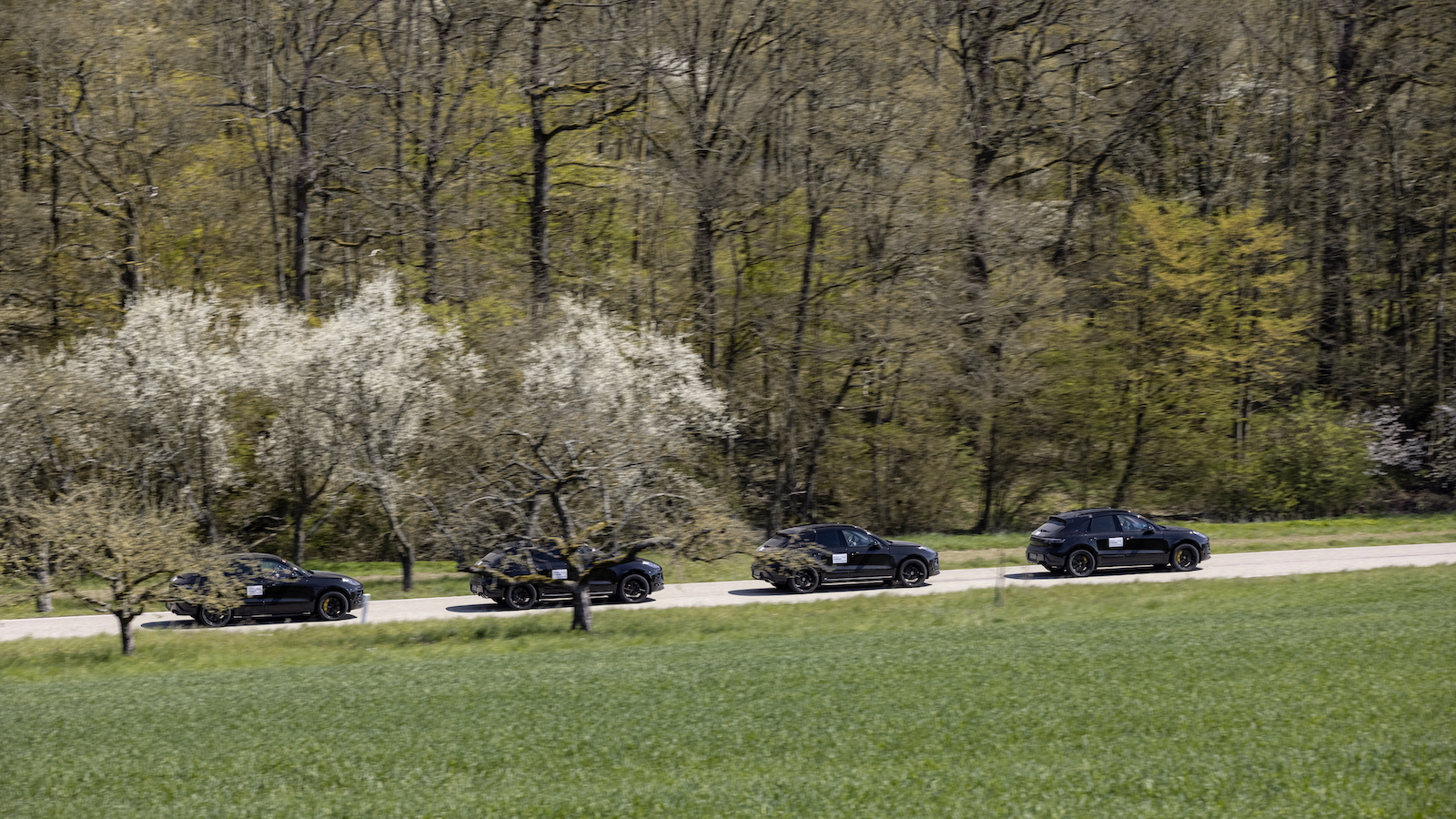 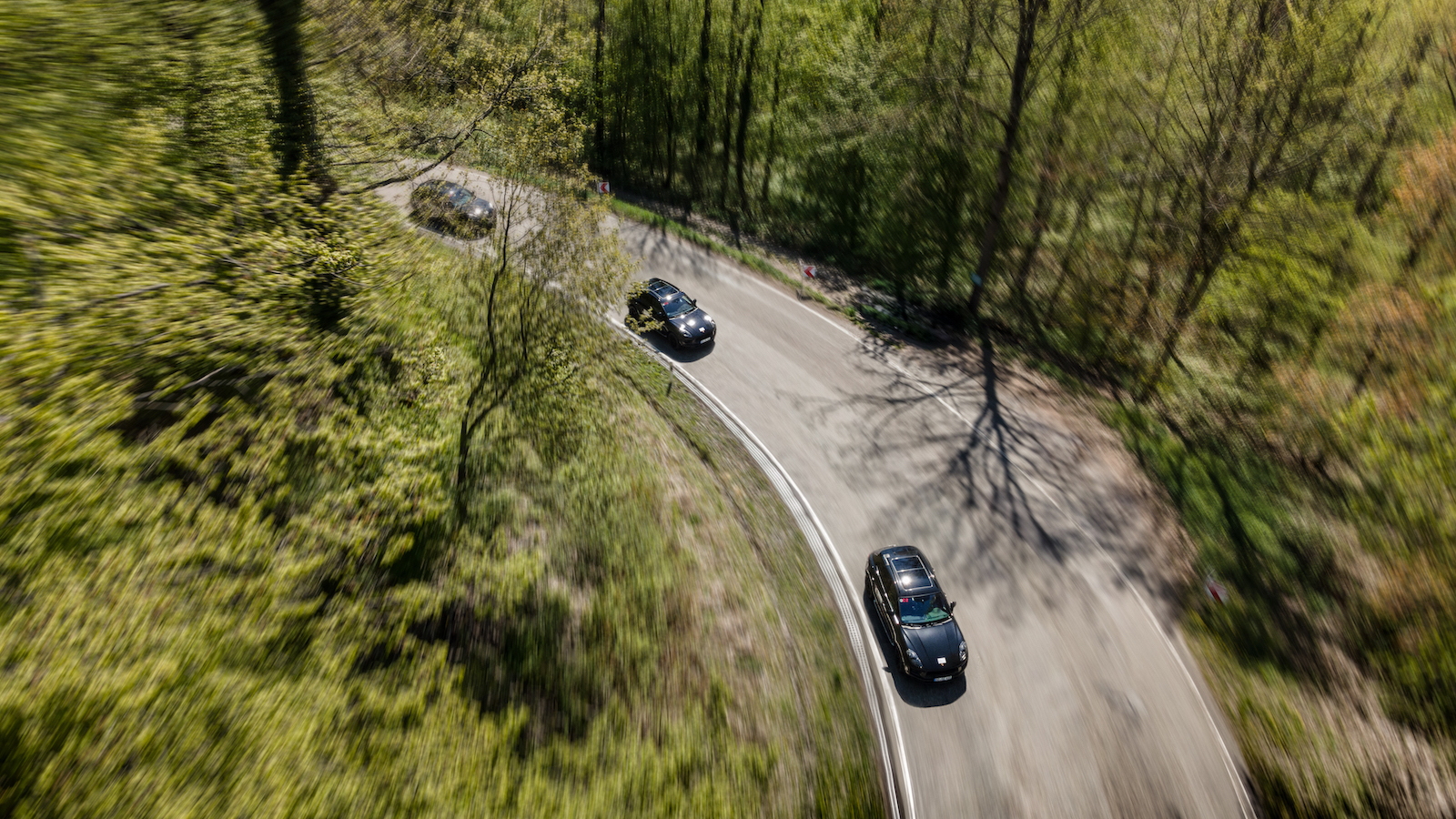 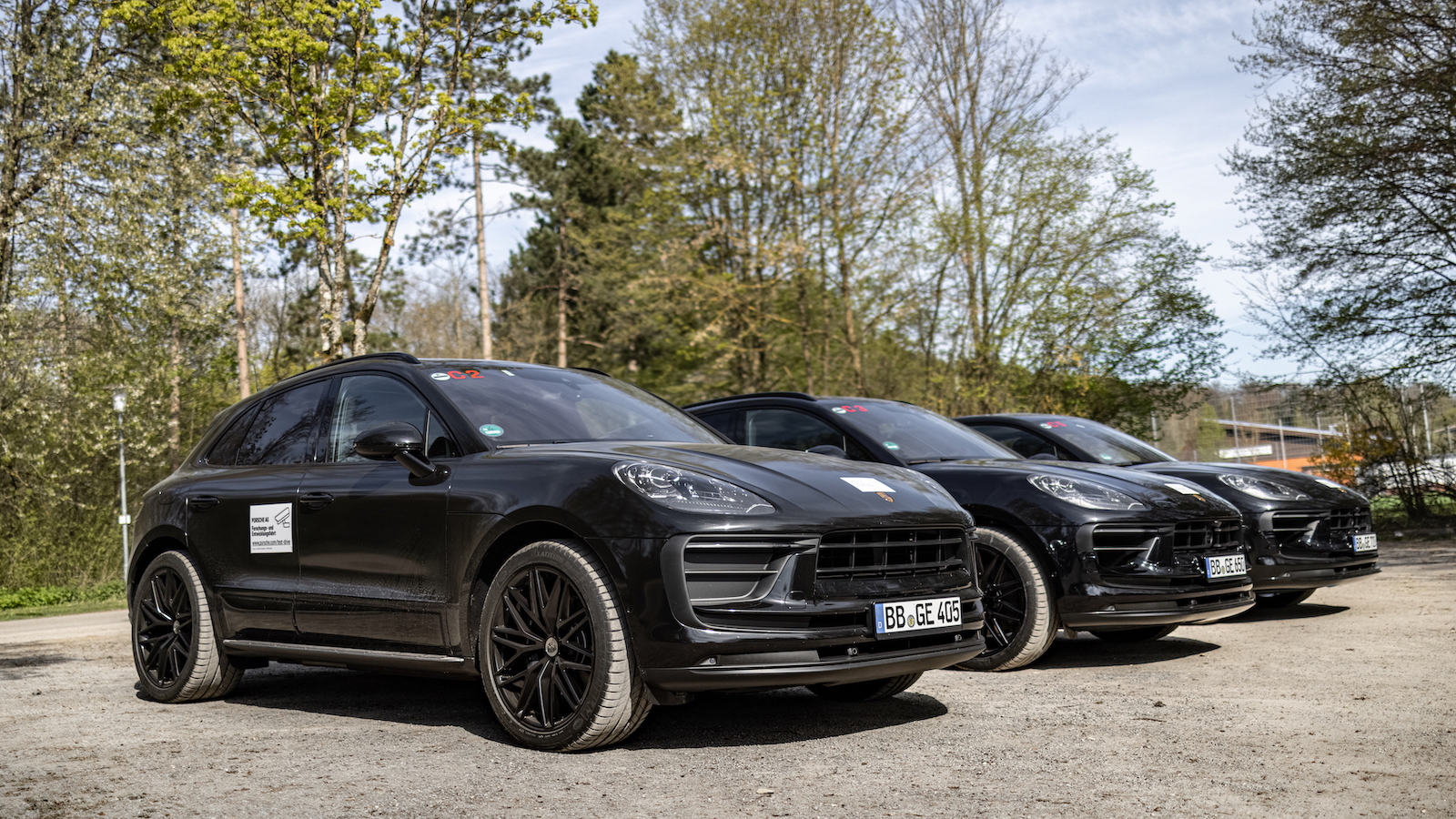 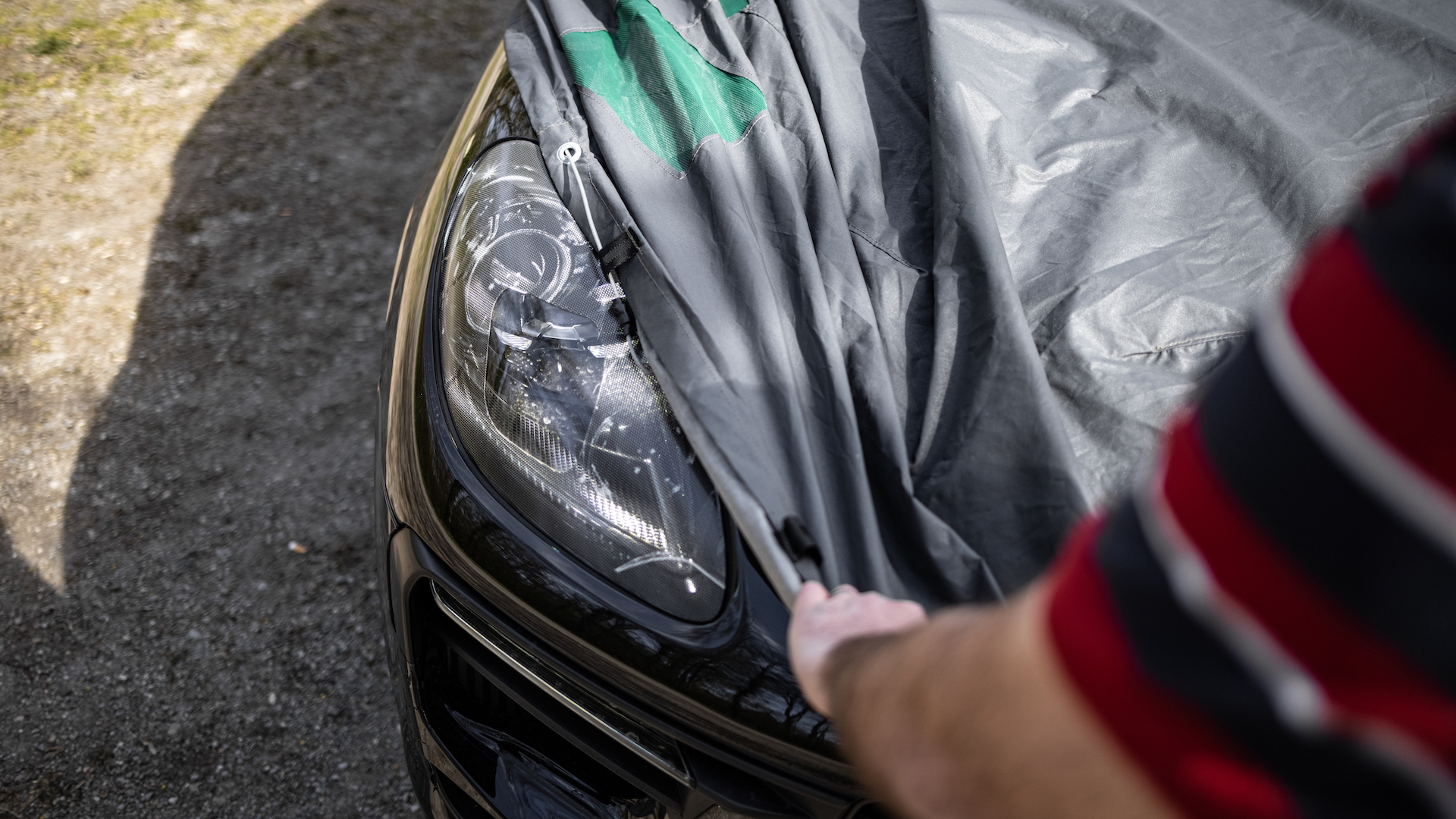 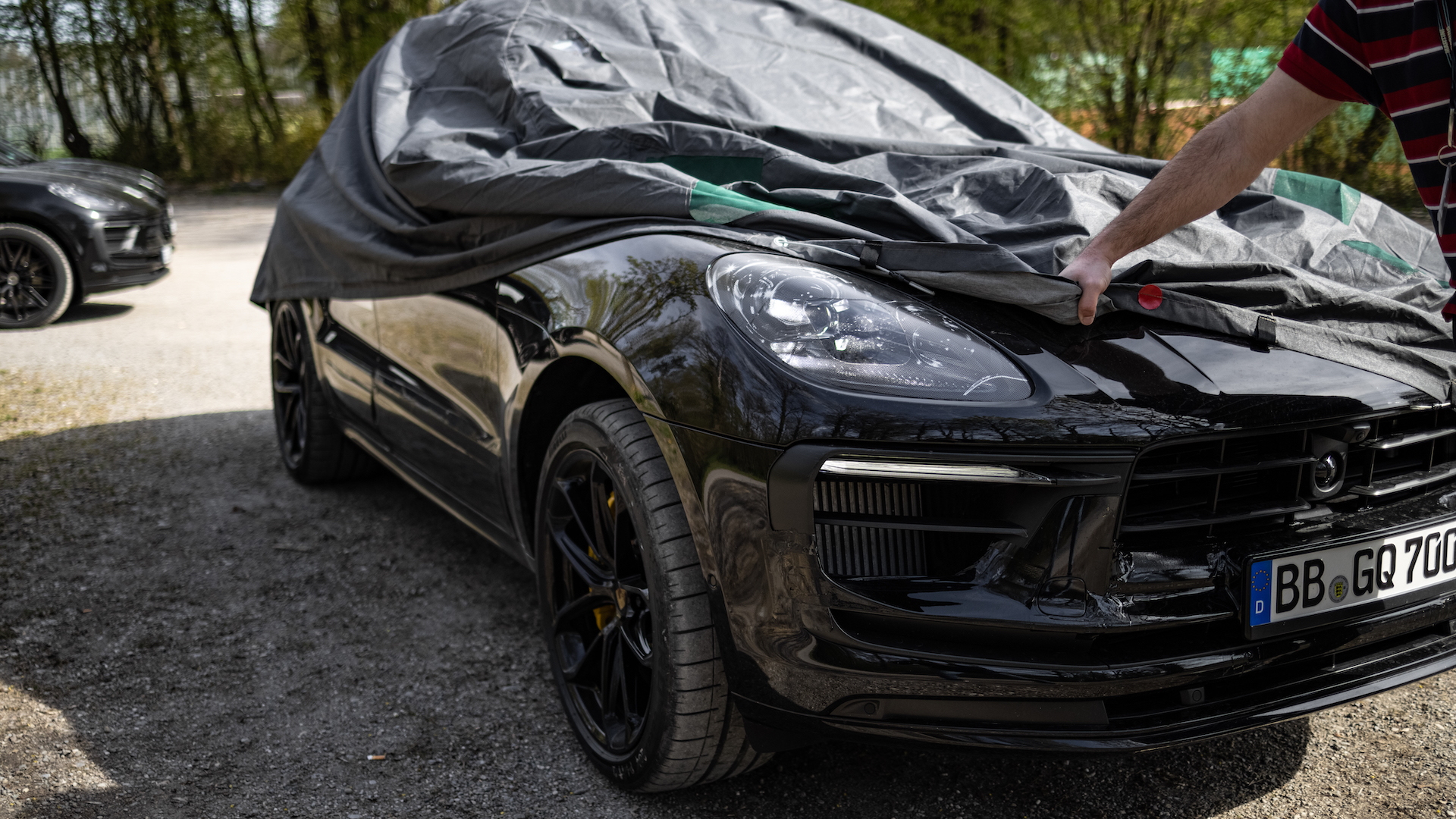 Life is about to get a lot tougher for the Porsche Macan.

Introduced in 2013, the Cayenne’s younger brother propelled Porsche to new heights by making the brand accessible to a wider and younger audience. It was the right vehicle at the right time. In the U.S., it outsold the 718 duo, the 911, and the Panamera combined in 2020. Starting in 2023, however, it will face the unenviable challenge of competing for the market’s attention with its intended successor, an EV built on a new platform (called PPE internally) with new technology and a new design.

While it sounds like the fight is skewed toward the newcomer, Porsche is teaching the original Macan a few additional tricks to level the playing field. Updated 4-cylinder and V-6 engines, subtle design tweaks, chassis improvements, and a better infotainment system are on the menu for the 2022 model. What better roads to sample these changes than those surrounding Porsche’s hometown of Stuttgart, Germany?

“We wanted to make at least one change per side,” explained Christian Graf, the complete vehicle manager for the Macan line, as we walked around a camouflaged pre-production prototype.

This is where the X-ray vision promised me when I was a kid would come in handy. Pressed for details, Graf noted designers tweaked the lower part of the front bumper to give the Macan a wider look, and made small revisions to the rear end. Clearly, it still looks like a Macan.

Inside, the changes are much easier to spot. Porsche gave the center console a ground-up redesign that ditches buttons in favor of touch-sensitive surfaces, a transformation partially made possible by a new gear selector that takes up less space. A 10.9-inch infotainment touchscreen carries over, but Porsche promises yet-to-be-divulged improvements. Technology is an important measuring stick in the luxury car segment, and the Macan has to keep up.

The Macan is still marketed as the driver’s choice in the segment, and the availability of a steering wheel borrowed from the 911 adds credibility to this claim. Right-sized, it instantly makes the steering feel quicker. Porsche’s visual updates tend to be evolutionary more than revolutionary, and the Macan is not an exception to this rule.

All turbo, no Turbo

Porsche’s mechanical improvements, however, are normally more extensive, and the Macan doesn’t try to swim against the current here, either. The entry-level model receives a newly developed 2.0-liter turbo-4, the S gets a 27-hp bump, and the GTS welcomes 59 horses to its cavalry. One of the reasons for the big increase is that the GTS will become the range topper; the Turbo currently positioned at the top of the Macan hierarchy is headed for the history books. Reading between the lines suggests the Macan EV will follow the Taycan into turbo-less Turbo territory, but nothing is official yet, and Porsche isn’t ready to talk about how the EV line-up will look.

Mild, hot, and fire sounds like a good order for sampling Porsche’s new Macan recipe, which means starting with the base turbo-4 model. It has never been one of the portfolio’s highlights, partly because the beefier V-6s have always overshadowed it, and partly because it lacks some Porsche-ness, both in sound and performance, both factors that help separate a mainstream car from an enthusiast’s car. The folks in Zuffenhausen must have detected that disconnect because the new engine (rated at 260 hp and 295 lb-ft of torque) is punchy, linear, and markedly more refined overall than the 2.0-liter turbo-4 it replaces. Drivers can finally take advantage of having less weight over the front wheels on a winding road.

Next on the sampler list is the S, which swaps its 3.0-liter V-6 for a familiar 2.9-liter V-6 with two turbos. With 375 hp and 383 lb-ft of torque on tap, it’s in more of a hurry to build speed, and it feels like a natural evolution of its predecessor. The real star of the show is the GTS, however. Newly promoted to flagship status, it’s powered by a version of the same engine that makes 434 hp and 405 lb-ft of torque. To add context, the 911 Carrera’s 3.0-liter flat-6 posts figures of 379 and 331, respectively. Apples to oranges, of course, but the point is that’s big power for a compact SUV.

Porsche doesn’t take the GTS designation lightly; whether they’re on a Macan, Panamera, or 911, these three letters denote a car developed with handling in mind. Engineers worked their magic on the Macan’s air suspension to make the standard ride height lower, though it’s adjustable. They also added front and rear air springs that are 10% and 15% stiffer, respectively, than the previous model’s, and they made software calibrations to widen the spread between comfort and performance.

It’s not a surprise that the lowest, firmest, and most powerful Macan is also the best one. The changes give Porsche’s smallest crossover (and small is relative here; we’re talking about a 4,400-pound vehicle) a sports car characer. It’s quick off the line, reasonably flat around bends, and admirably comfortable during the commute. It’s not the most powerful entry into the ever-crowded crossover and SUV segment—not when Jeep and Dodge are making family trucksters with supercar-like power look as normal as the Star-Spangled Banner on the 4th of July and Porsche is preparing a mega-Cayenne—but it likely earns the handling crown. We’ll need to put more miles on its odometer to tell.

The Macan GTS ist he kind of vehicle that leaves you wanting more time behind the wheel; that’s Porsche-ness. However, if I could take the reigns of the team putting the final touches on the Macan, I’d request a louder exhaust system. It has the soul and the legs of a sports car, but not the voice. My time behind the wheel was limited to a European-spec pre-production prototype, so the V-6 might roar louder by the time it reaches U.S. European-spec cars are quieter than their American-spec counterparts due to tighter noise regulations, and Porsche stressed development work is on-going.

On the final stretch

Porsche will introduce the updated Macan during the summer of 2021, and sales will presumably start shortly thereafter as a 2022 model. It’s difficult to know precisely how long the revised crossover will be in the range, but it will likely be sold alongside the upcoming EV model. Even if sales remain strong, however, the hostile regulatory environment in Europe will drive the final nails in the gasoline Macan’s coffin. Porsche told me that, as of writing, the general plan is to put the model out to pasture when the harsh Euro 7 emissions regulations come into force around the middle of the 2020s. Until then, the Macan will continue vying for the crown of the most engaging crossover money can buy.

Porsche provided travel, lodging, and access to super-secret prototypes for Motor Authority to bring you this first-hand report.