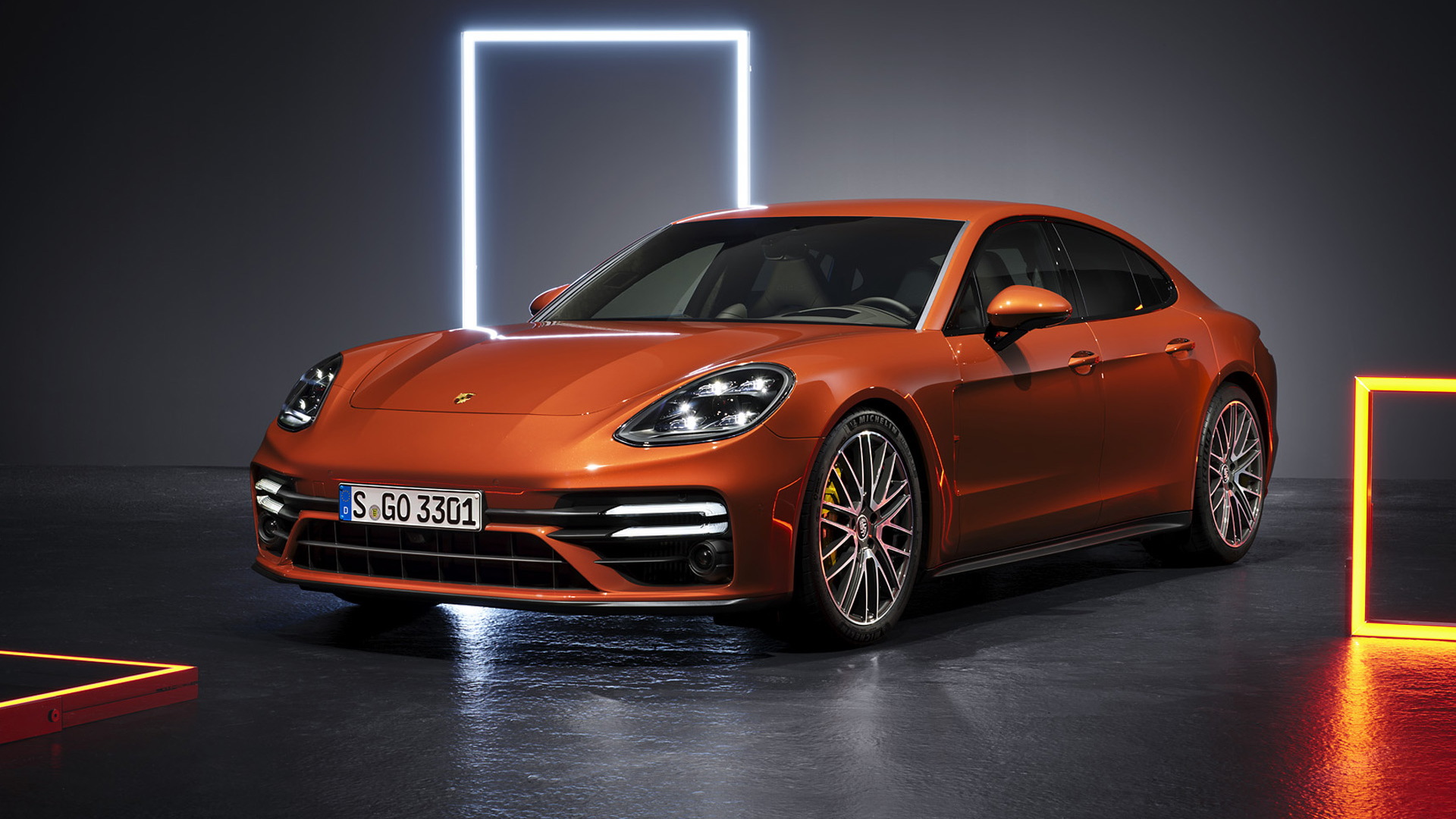 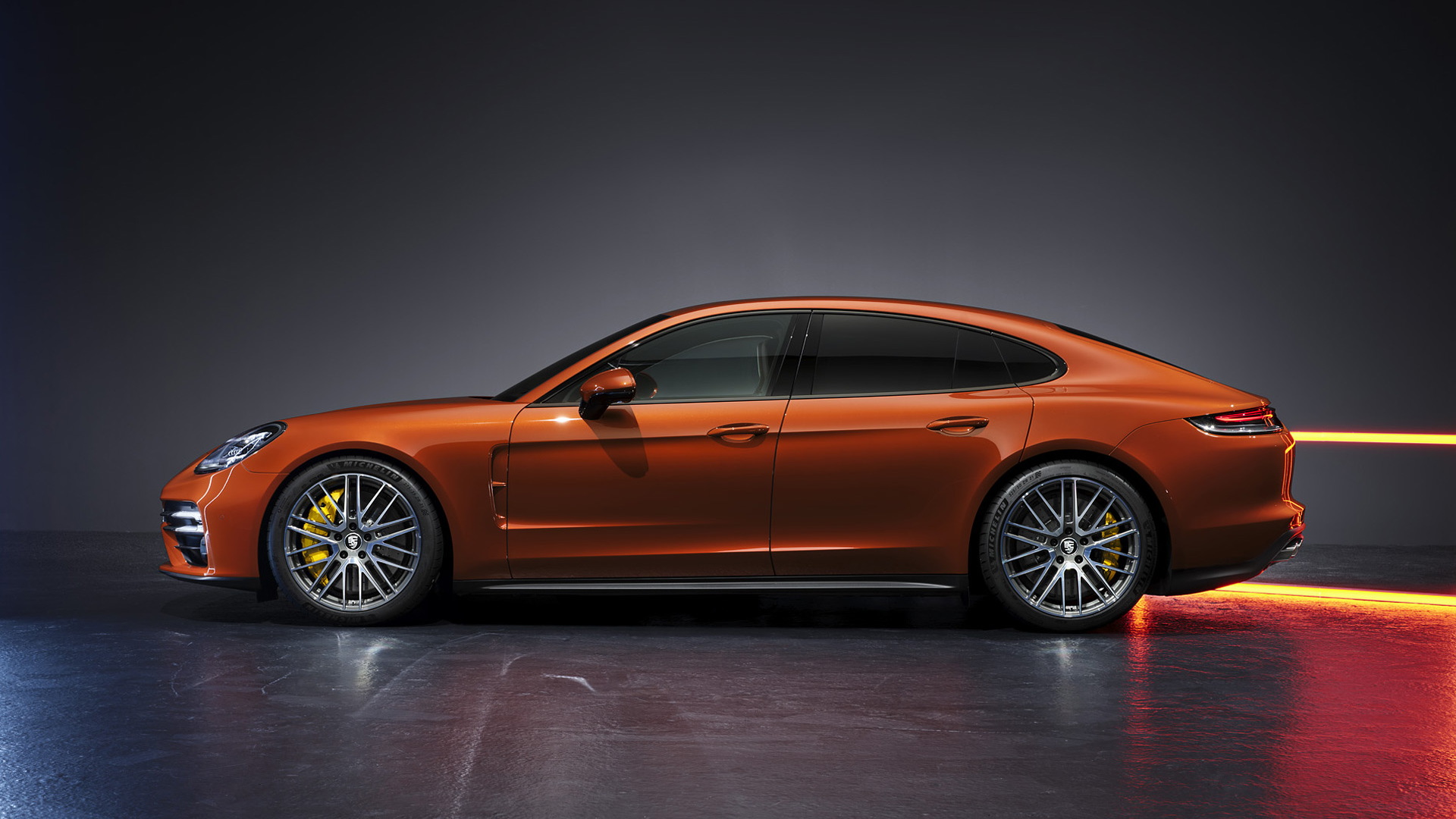 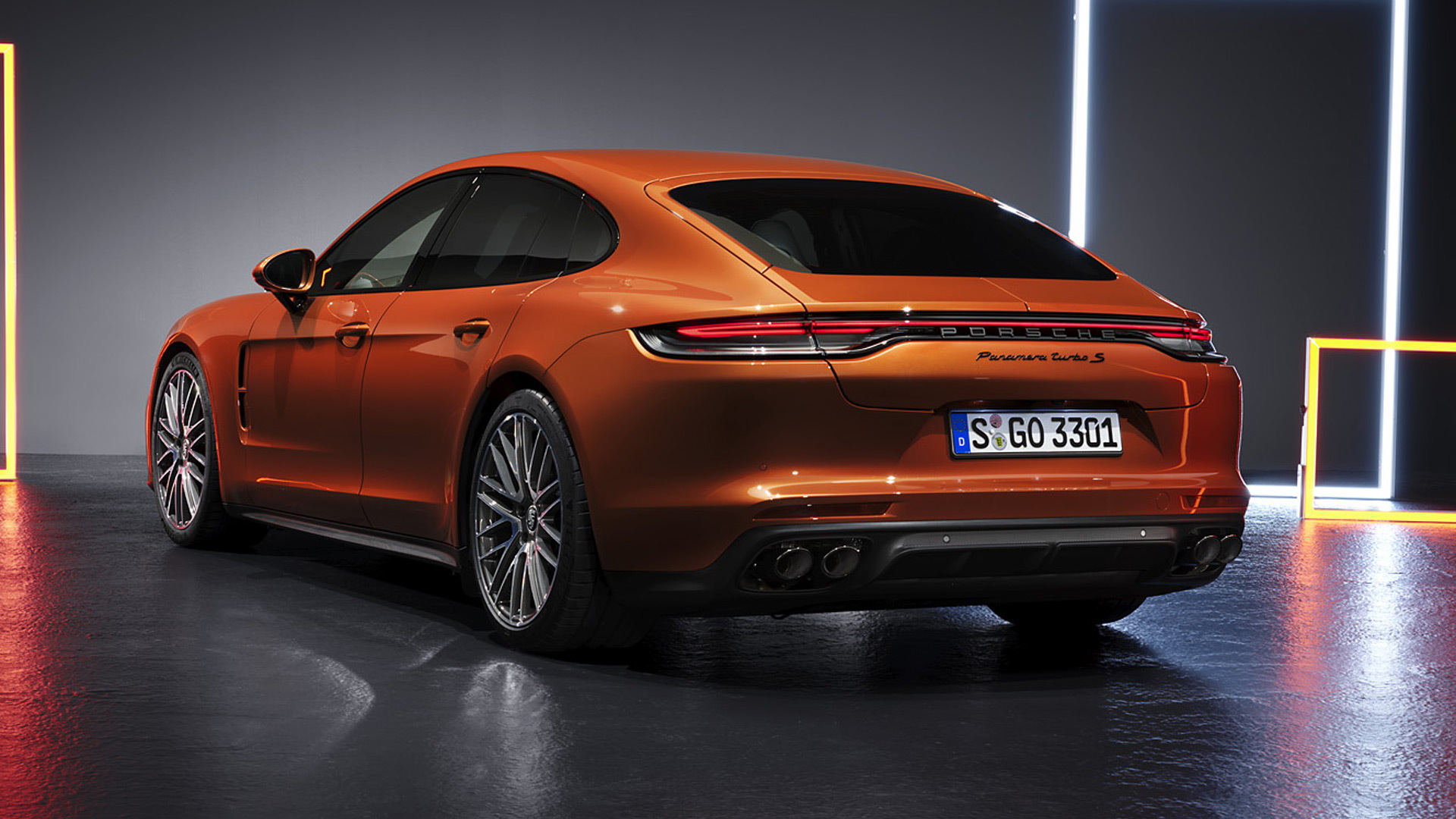 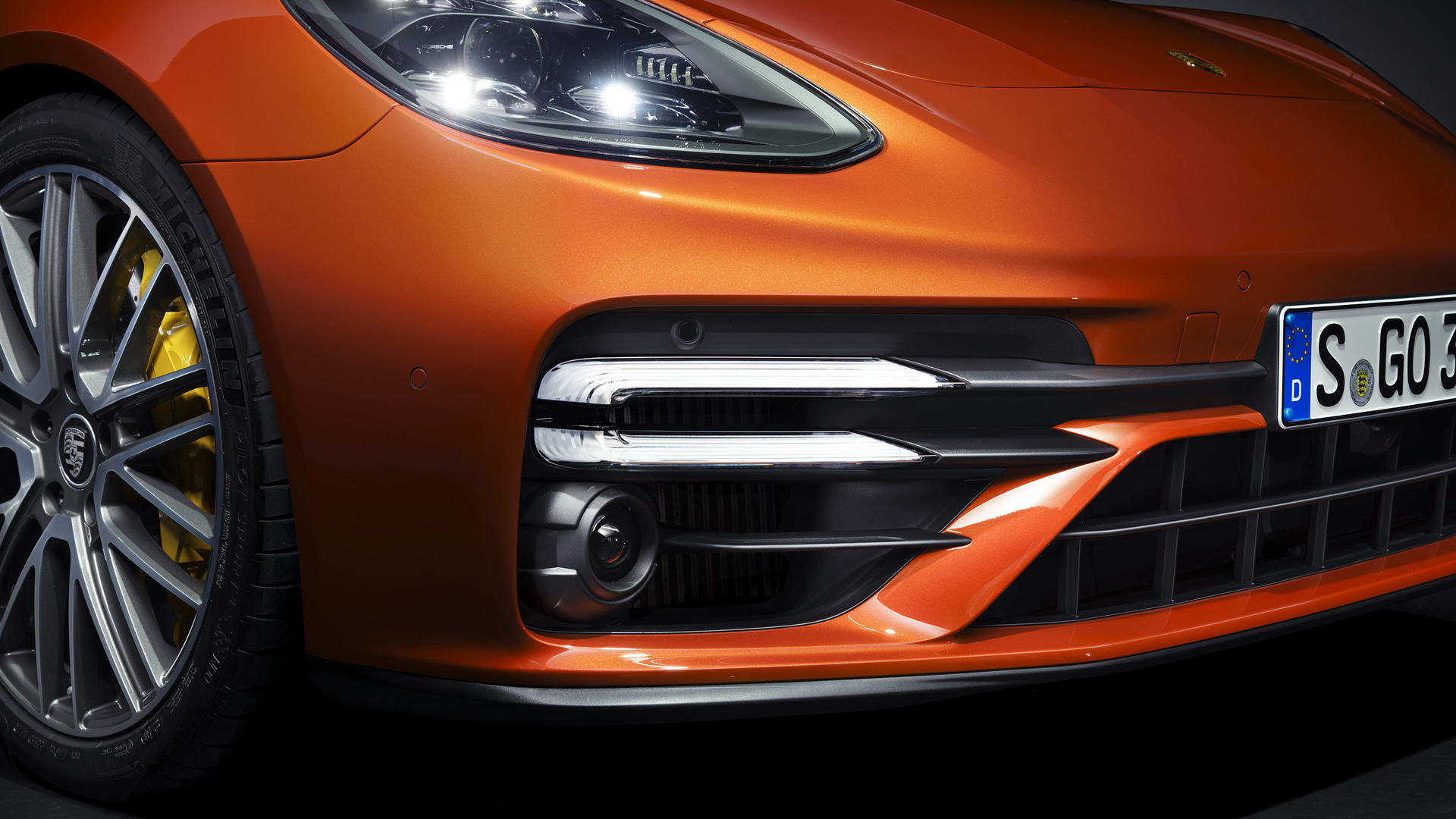 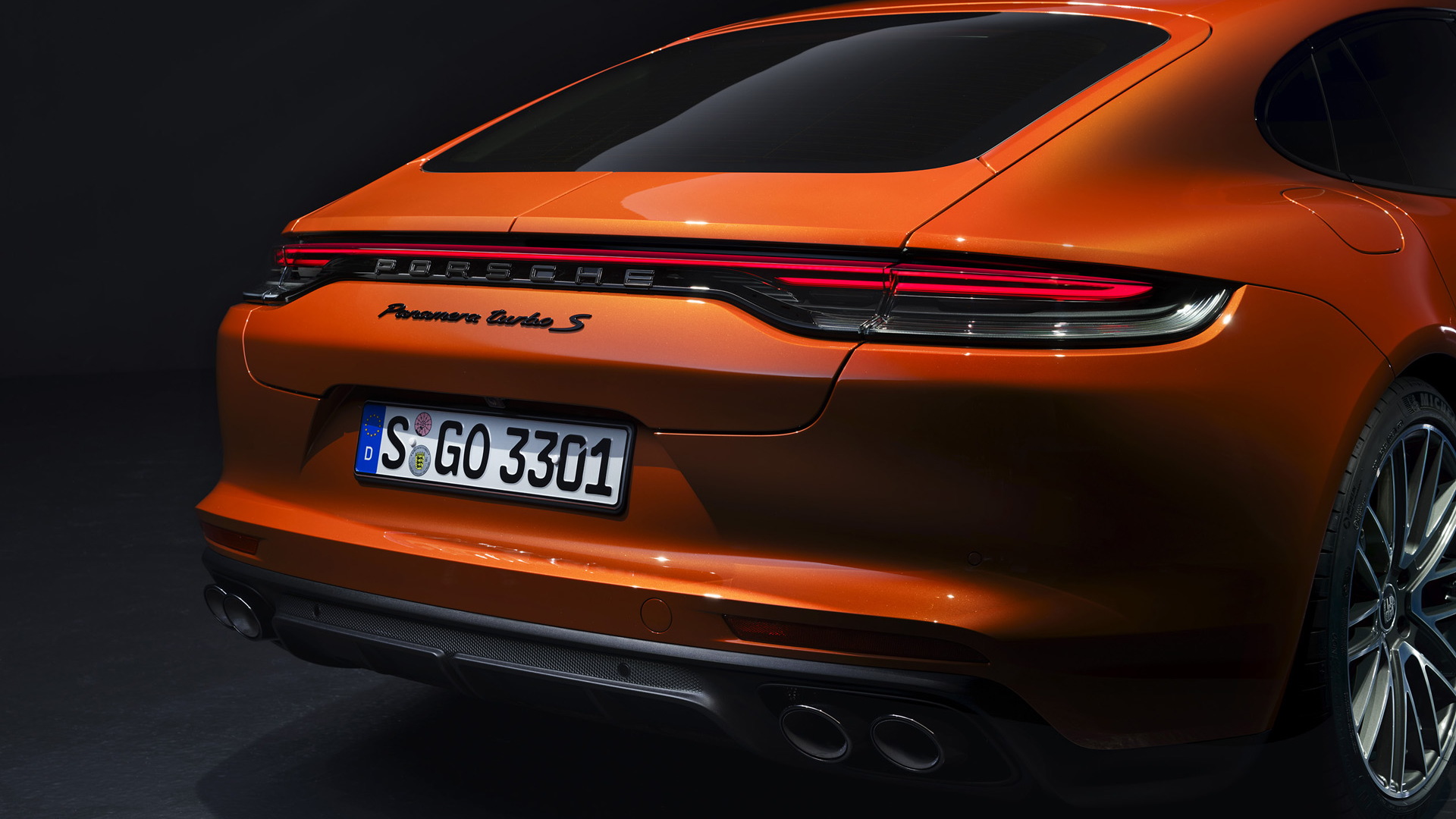 Porsche's Panamera has come in for a mid-cycle update.

The big German, currently in its second generation, will arrive in updated form next spring as a 2021 model, and we've already tested it as a prototype.

Porsche hasn't pulled any major surprises with its updates to the liftback sedan and wagon. The updates consist of minor tweaks to the styling of the car, as well as chassis improvements and the introduction of two new variants. One is a 4S E-Hybrid that replaces the current Turbo, and another is a new Turbo S with a more powerful version of the current Turbo's V-8.

All 2021 Panameras feature the previously available SportDesign fascia as standard up front, while at the rear is a new continuous light strip that connects the two taillights, similar to the design used on other Porsche models. New colors (Cherry Red Metallic and Truffle Brown Metallic) and wheel patterns are also available.

In the powertrain department, the base option is now a 2.9-liter twin-turbocharged V-6 making 325 horsepower, instead of the previous 3.0-liter turbocharged V-6 that makes 330 hp.

Another key change is a new 17.9-kilowatt-hour battery (up from 14.1 kwh previously) in the E-Hybrid plug-in hybrid models. Thanks to the bigger battery, along with recalibrated drive modes aimed at maximizing efficiency, pure electric range should be higher than the current 14 miles as rated by the EPA.

But what about power improvements? The 4.0-liter twin-turbocharged V-8 in the GTS now delivers 473 hp, up 20 from before. The throttle calibration has also been tweaked so the engine responds more like a naturally aspirated unit.

And as mentioned above, the Turbo has been replaced by a new 4S E-Hybrid. This plug-in hybrid model pairs the base 2.9-liter twin-turbo V-6 with an electric motor to achieve 552 hp. That compares to the old Turbo's 550 hp and rockets the 4S E-Hybrid from 0-60 mph in as little as 3.5 seconds and to a top speed of 185 mph.

Above this is a new Turbo S. It features an upgraded version of the Turbo's 4.0-liter twin-turbo V-8 (new crankshaft, connecting rods, timing chain, fuel injectors, and a reduced compression ratio), and rates in at 620 hp. Porsche said this model will hit 60 mph in 2.9 seconds and top out at 196 mph. We've also learned that this is also the model that lapped the Nürburgring faster than a C8 Chevrolet Corvette Stingray.

The Turbo S E-Hybrid continues to the top the range with a 4.0-liter twin-turbocharged V-8 and electric motor combo registering at 689 hp, up from 680 hp previously. Because of the weight of its electronics, it's slightly slower than the Turbo S, requiring 3.0 seconds to reach 60 mph. Top speed here is also 196 mph.

Meanwhile, the 4S features the base model's 2.9-liter twin-turbocharged V-6 but with output dialed to 443 hp, up from 440 hp previously. It also comes standard with air suspension which was an option previously.

And finally, there's the 4 E-Hybrid which also shares the base model's engine but augments this with an electric motor for a combined 455 hp, down from 457 hp previously.

Porsche also made chassis tweaks for each model in the 2021 Panamera range. These include improvements to ride quality and steering feedback made via tweaks to the adaptive dampers and electronic power steering, respectively. New tires offering increased grip and lower rolling resistance have also been added. A new high-performance summer tire is also available for the first time.

Pricing information for the 2021 Panamera range will be announced closer to the market launch but for reference, the 2020 Panamera range starts from just under $90,000. All three body styles, the standard liftback sedan, Executive long-wheelbase sedan, and Sport Turismo wagon, will be available at launch.

For more on the Porsche Panamera, read the in-depth reviews at The Car Connection.