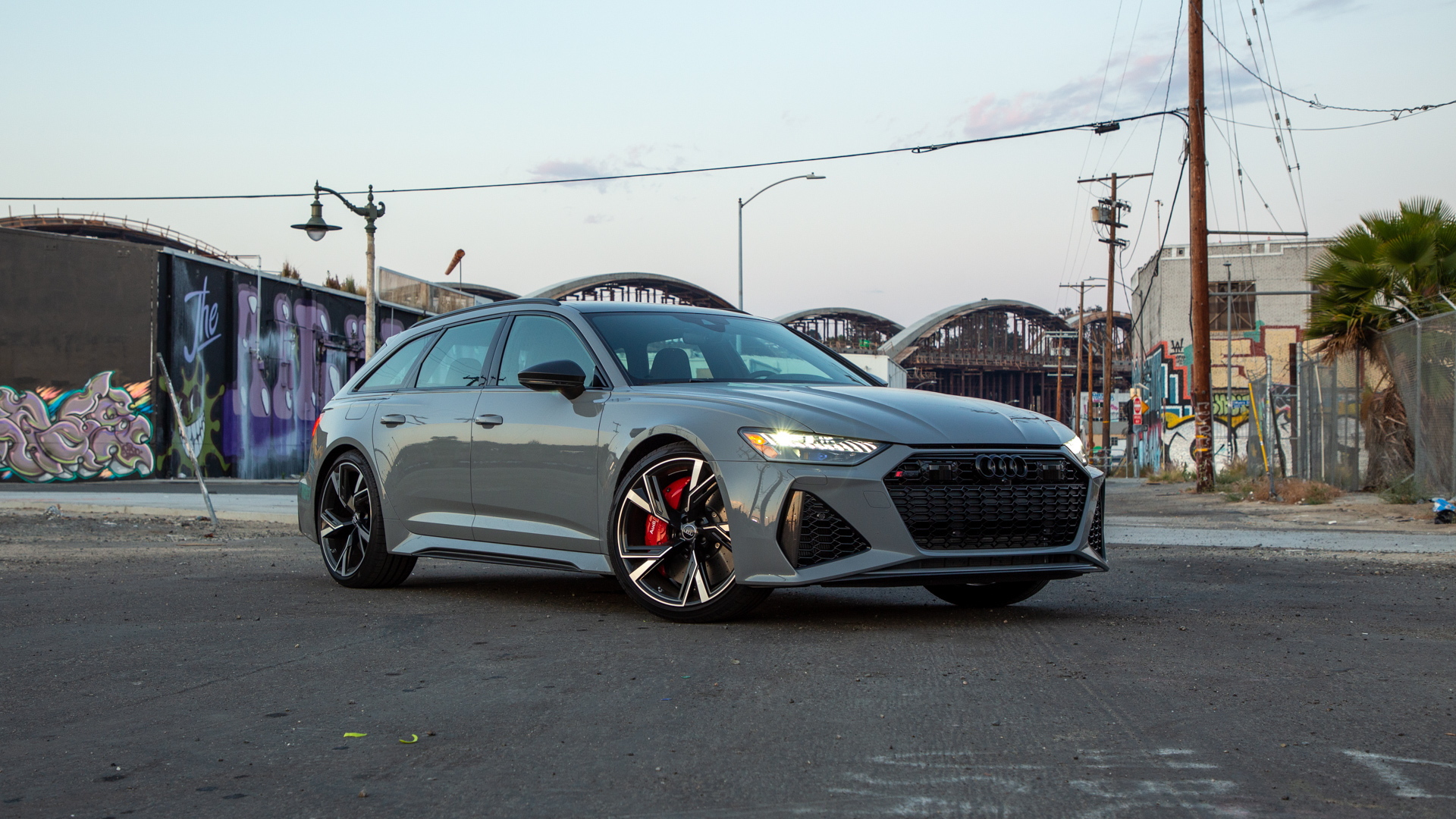 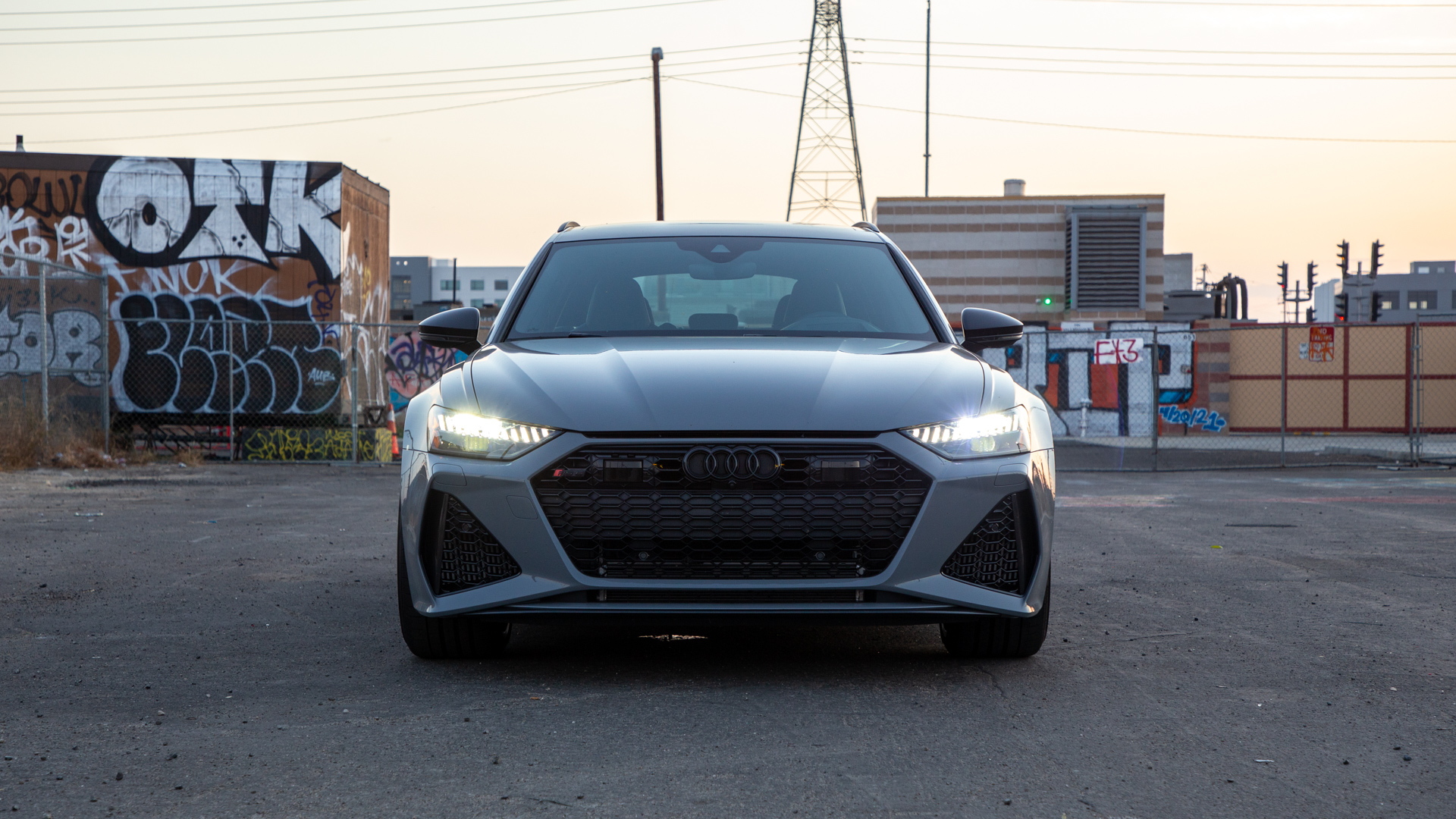 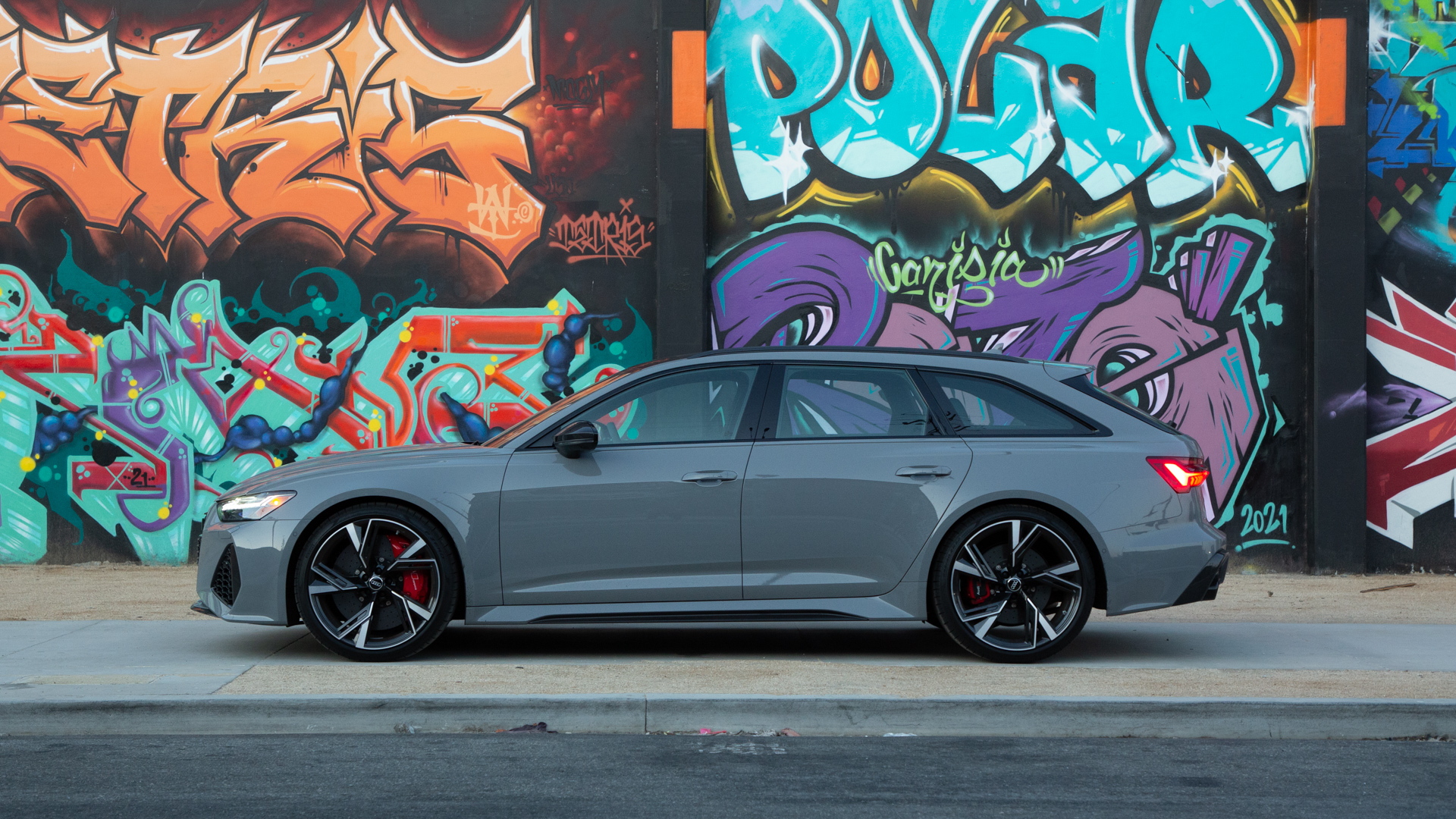 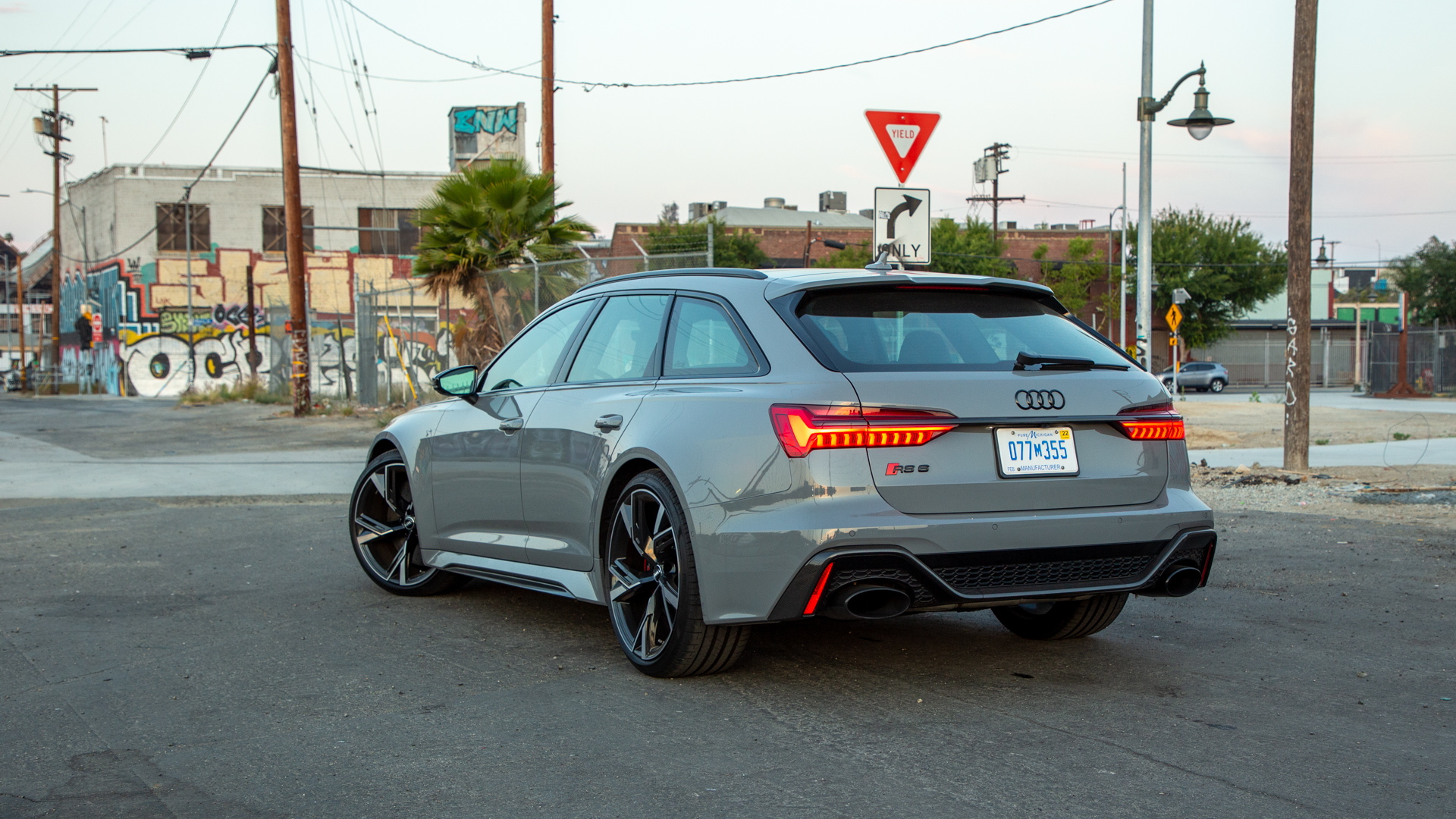 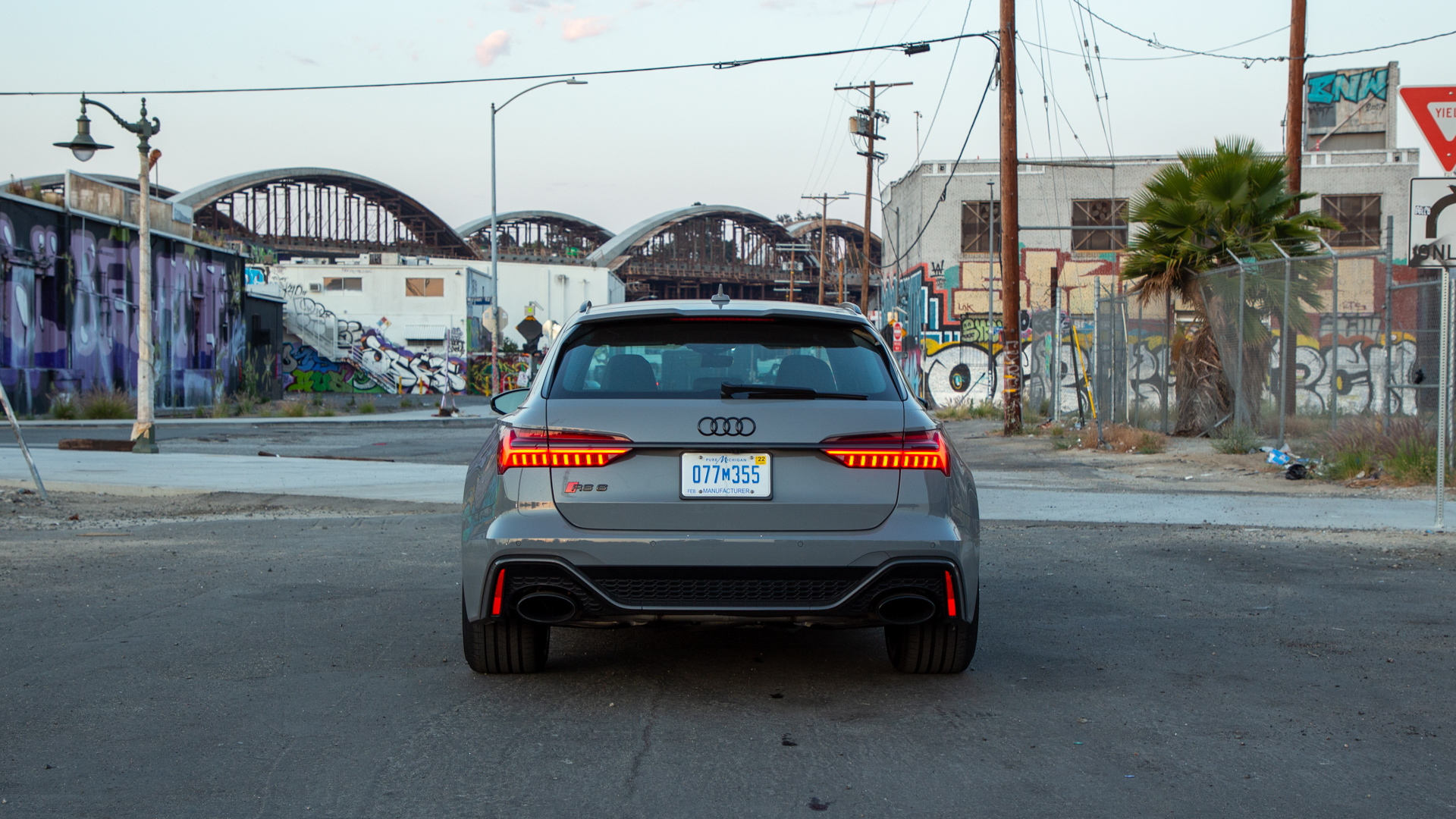 As a formerly shy child myself, I do not hold it against my neighbor’s daughter that she hadn’t spoken any words to me in the five years we’ve lived in the same building. She’ll usually sort of hide behind her mom as we exchange pleasantries, then give a little wave on the way out.

Until last week that is. I was behind the wheel of the 2021 Audi RS 6 Avant and we passed each other as I pulled into the shared garage underneath our building. The two sets of windows on their Subaru Outback rolled down simultaneously. Her mom went first, saying “that thing is…” before trailing off with a nod. Then the child leaned forward out of her booster seat, gave me a thumbs up and said “great car.”

The wagon’s throaty exhaust note and handsome looks were a worthy wrecking ball to bring down the wall of silence between us. Apparently, the RS 6 Avant isn’t just an enthusiast’s dream, it speaks to all ages. It’s a special car, a part of a dying breed of performance vehicles draped in V-8 excess that make no apologies for their poor fuel economy. The RS 6 gets 17 combined mpg—worse if you let it off the leash frequently, as I did.

Settling into the RS 6 Avant feels familiar. I tested the 2021 RS 7 earlier this year, and the two cars are twins that differ in appearance. The DNA is the same; the powertrain, suspension, and interior hold constant, just with a slightly different body on top. The RS 6 Avant is 0.5 inch shorter in overall length, but 2.5 inches taller in height, and a mere 22 lb heavier with a curb weight of 4,960 lb. Audi did not provide a direct measurement of the RS 6 Avant's cargo room, but said it should be spot on with what you get in the A6 allroad. If that's that case it also has a bit more cargo room than the RS 7, at 30.0 cubic feet vs. 24.6 cubic feet.

As you might expect, the two feel nearly the same behind the wheel. I spent much of my week with the car trying to figure out exactly where the differences lie, testing them on identical roads and with identical cargo (both easily swallow a pair of golf club bags). But rather than finding a difference in the vehicles, I found more of a difference in myself. I enjoyed Audi’s RS formula more the second go round.

The RS 6 Avant’s best attribute is still its engine, a fire-breathing twin-turbocharged 4.0-liter V-8 that cranks out 591 hp and 590 lb-ft of torque in the RS 6 (matching the output of the RS 7). That’s enough power to get the RS 6 Avant from 0-60 mph in just 3.5 seconds and up to a top speed of 190 mph (without my test vehicle’s optional carbon-ceramic brakes it’s limited to a measly 155 mph).

It still doesn’t feel quite as snappy off-the-line as I’d like, there’s a hint of hesitation when you slam the throttle. But once it gets out of first gear, the wagon pulls and keeps pulling well past 80 mph. The RS 6 Avant doesn’t really squat down on its rear wheels under acceleration, even hard acceleration, so it feels like you’re not moving all that fast since the whole process happens with such little drama. But a quick glance at the head-up display shows the numbers flying by and the RS 6 Avant’s soundtrack of low rumbles and burbles quickly rises up to match.

After I drove the RS 7, I wrote “as prodigious as the RS 7’s power output is, its handling isn’t in the same league. It’s not sloppy, it’s just heavy.” I still think this is true; the power is the star here. But what I came to appreciate more was the RS 6 Avant’s superb balance, despite its heft.

The RS button on the steering wheel toggles between RS1 and RS2 drive modes that can be customized through the center screen. I turned the stability control to “Sport” for RS2, which lets the car get a little loose before the nannies kick in, which, unfortunately, I wasn’t able to safely test on public roads. There’s so much grip, that to get the RS 6 Avant to step out would require some real carelessness, and I wasn’t about to engage in that type of driving on the Angeles National Forest’s mountain roads, where mistakes can mean disaster.

That balance inspires confidence. I took each winding corner with a bit more vigor, and the RS 6 Avant’s exhaust snorted appealingly as I rolled back onto the gas at each apex. With all that weight, the tires do begin to protest if you carry too much speed and the RS 6 Avant tends to understeer.

Learning this tendency helped me find the best way to drive the RS 6 Avant: get the braking done early, take a late apex to give yourself more run out, and get on the power as soon as possible. The wagon shines most here. The AWD system is so adept at moving power to the right spot at the right moment that you can get on the gas earlier than you think. You can’t drive this way In a rear-wheel-drive vehicle or you’ll send it spinning. But here, it’s practically point-and-squeeze on corner exits. With all that raw power, it’s an extremely satisfying sensation.

The steering could be better. It’s very accurate, but it doesn’t offer the amount of feedback and responsiveness I’d like midcorner. However, this car is so balanced that even with that bit of vagueness, it still feels rather planted and stable. I’d also like a more-aggressive transmission setting that would hold gears longer, though this can be accomplished with the paddles shifters. The transmission’s shift logic feels a hair behind Porsche’s PDK and the BMW 8-speed automatic, but those two set the bar exceedingly high.

When you’re not driving the RS 6 Avant hard, it’s still plenty good. The softer suspension settings give it a compliant ride around town. The interior offers top-grade luxury, with four extremely comfortable seats (don’t sleep on the rear buckets) and that wagon-sized cargo area that swallows up cargo with ease. Drivers are well advised to carry a microfiber cloth to wipe down the multimedia and climate control screens. Those sleek surfaces are a crime-scene investigator’s dream, holding any and all fingerprints for a long time.

This level of luxury and performance carries with it a matching price tag. The RS 6 Avant starts at $110,045 (including destination), undercutting the RS 7 by $5,000. My test vehicle added the options, the highlights of which were the excellent carbon-ceramic brakes ($9,000), a carbon-fiber package ($6,350) that also includes 22-inch wheels with Pirelli P Zero summer tires, and a sport exhaust ($1,000). Interestingly, adaptive cruise control and active lane control are not standard and they have to be added in as part of a $2,250 safety package. All in, my test vehicle cost a cool $131,645, which puts it in direct confrontation with the BMW M5, though it is slightly cheaper than the Mercedes-Benz AMG GT 63 4-Door Coupe.

Picking between the RS 6 Avant and RS 7 is impossible in some regards, given their similarities and nearly identical nature. If I had to pick one, I’d take the RS 6 Avant because I enjoy its brutish, yet classy style just a bit more—like Arnold Schwarzenegger in a tuxedo. Still, I’d be just as happy in an RS 7.

Though the sun may be setting on V-8 powered performance cars, the forthcoming performance variant of the RS 6 Avant will act as a bridge to the future. It will add a plug-in hybrid system to the car, similar to the one in the Porsche Panamera if rumors are to be believed. That system will enhance both performance and efficiency, and hopefully add some of that off-the-line burst that the car needs to feel more lively. I can’t wait to show my neighbors.