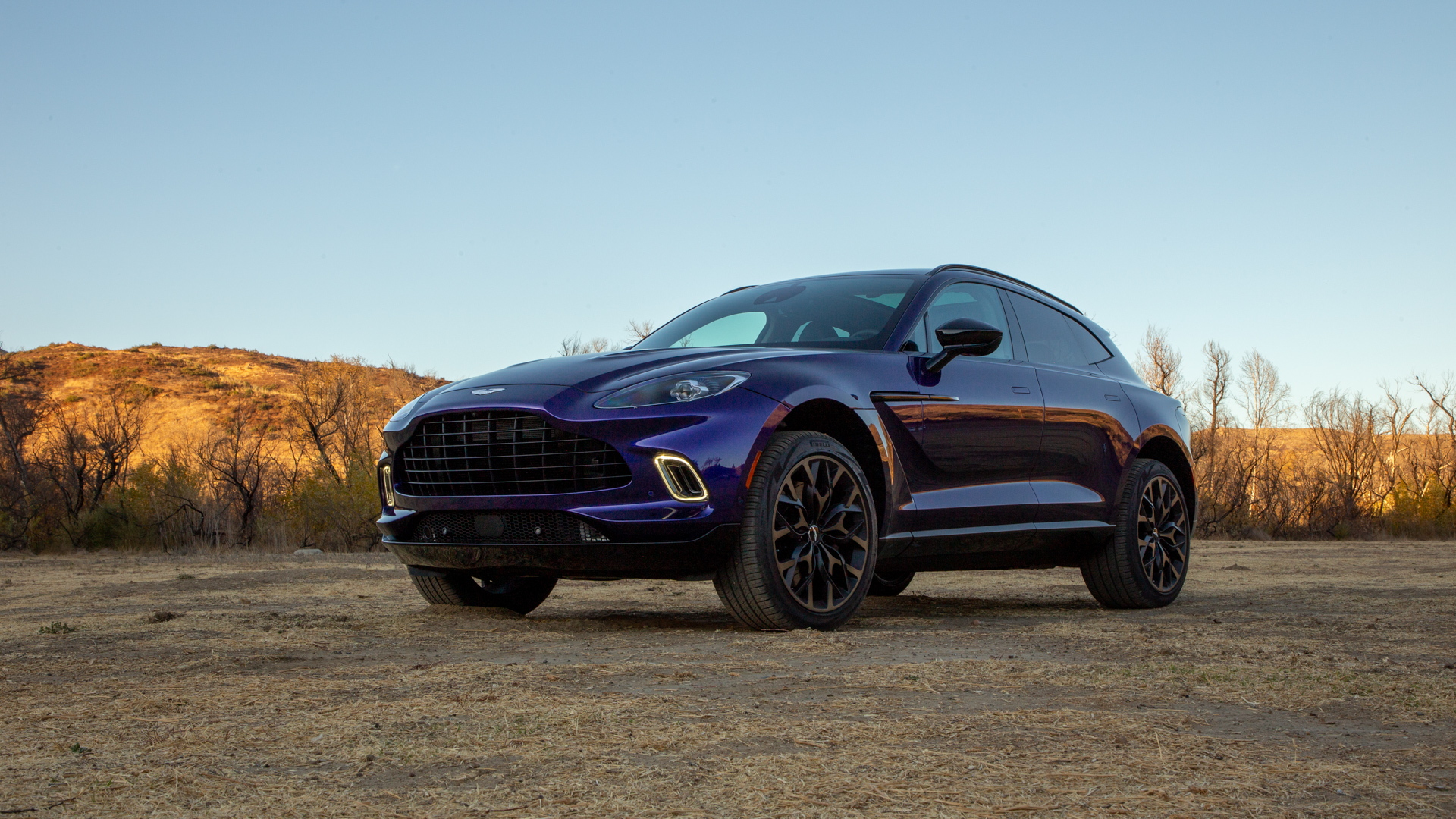 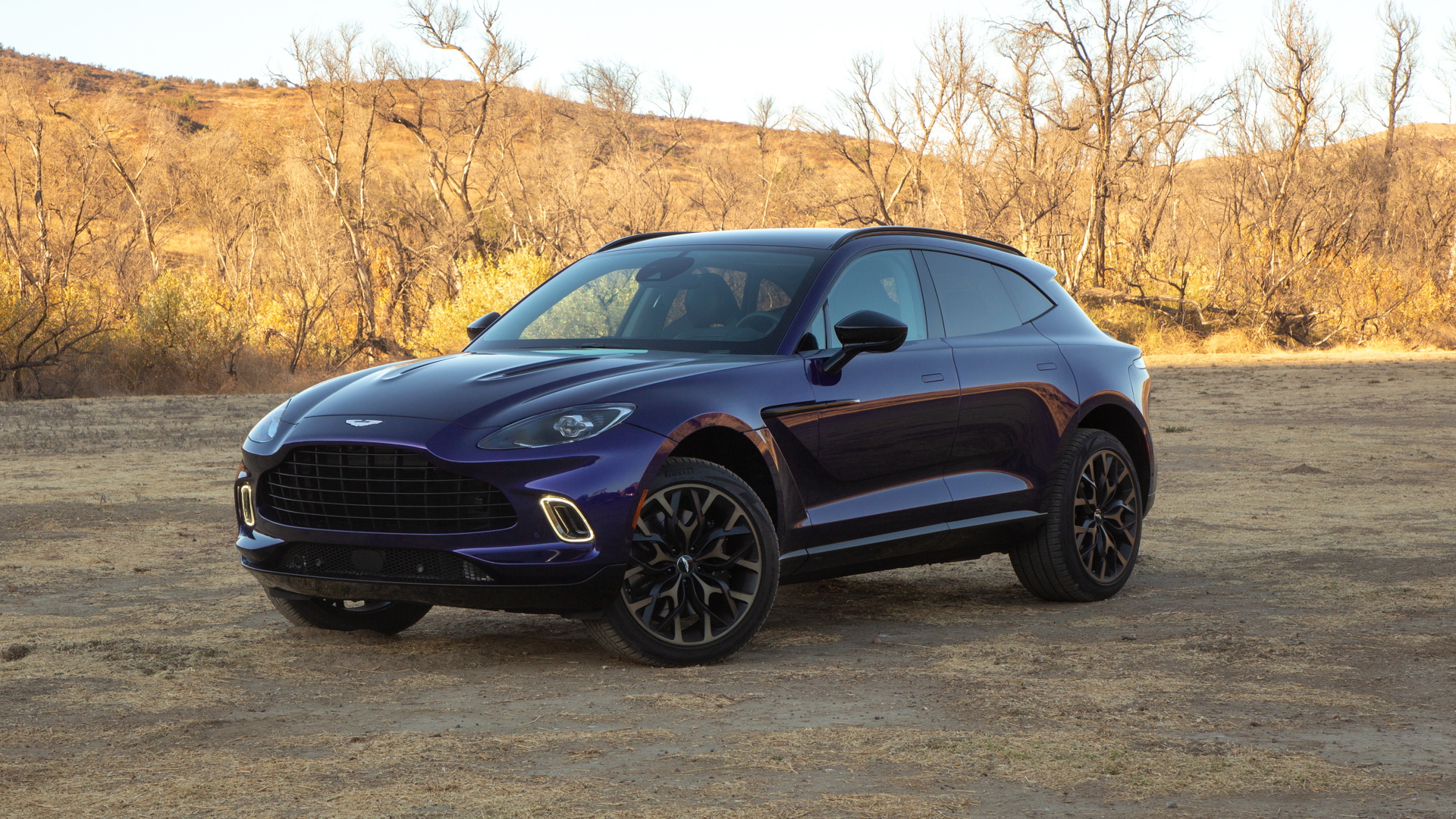 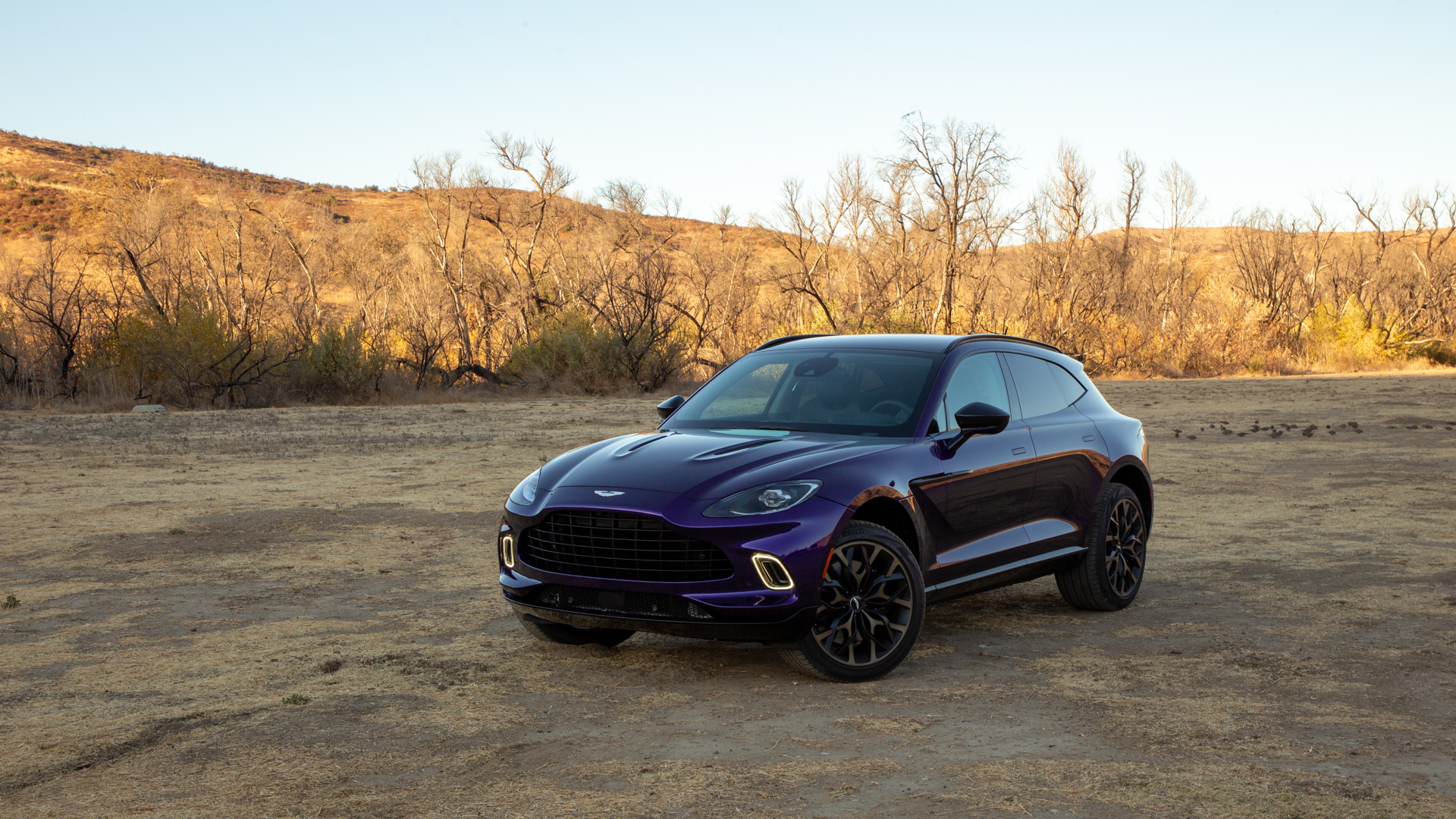 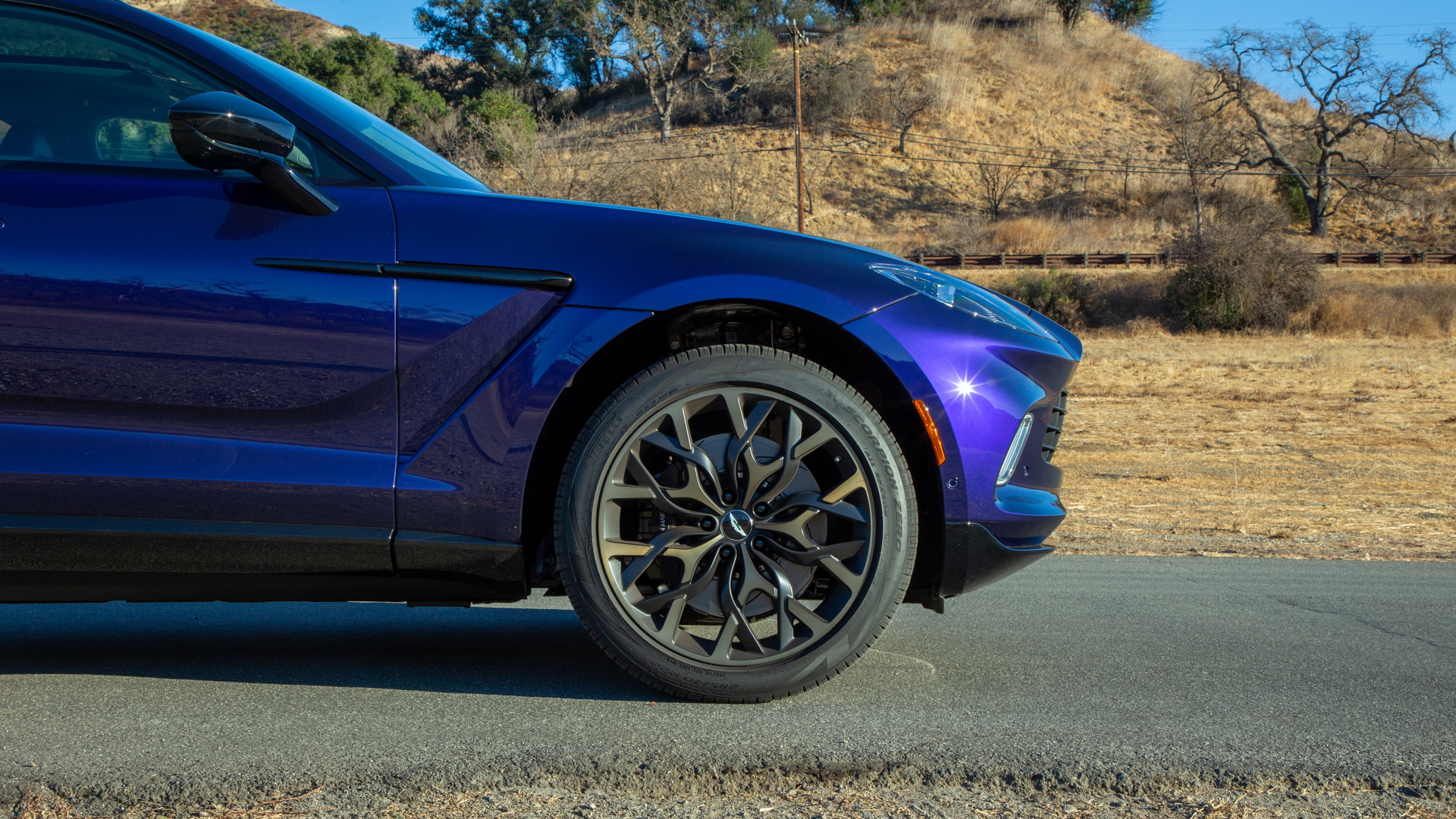 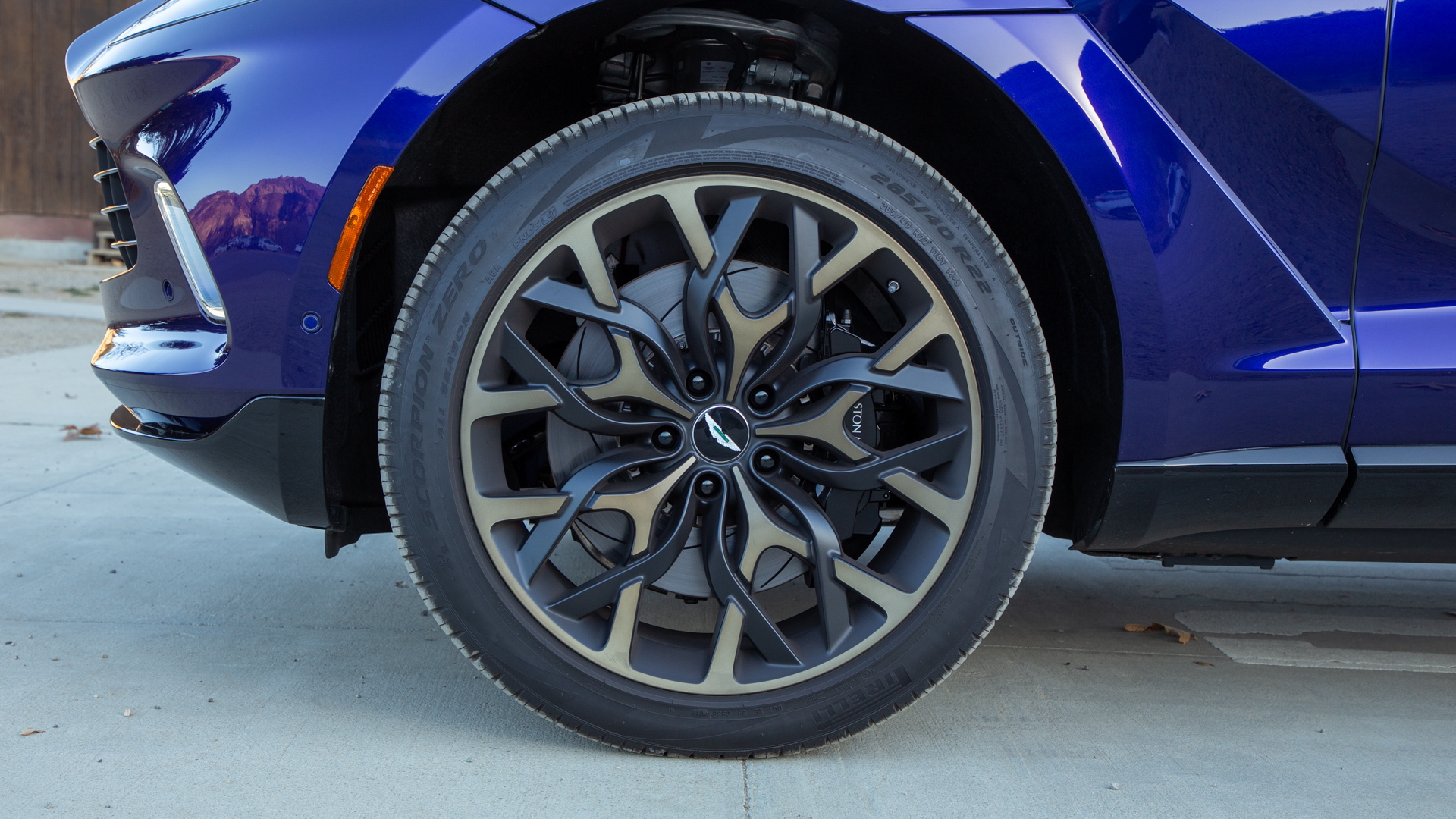 Yes, it’s weird for Aston Martin to make an SUV. It’s also strange to see Lamborghini make the Urus and Ferrari the forthcoming Purosangue. But the economic reality is that exotic car companies need to build utility vehicles to continue producing sports cars. If this is the cost, I for one will pay it gladly. It also helps that the 2021 Aston Martin DBX is a brilliant all-around performer.

Power comes from a 4.0-liter twin-turbo V-8 sourced from Mercedes-Benz AMG that’s also found in the DB11 and the Vantage. In the DBX, the V-8 gets upgraded turbochargers to push output to 542 hp and 516 lb-ft of torque. Aston quotes a 0-60 mph time of 4.3 seconds and a top speed of 181 mph, impressive figures for an SUV that tips the scales at 4,940 pounds. Power is routed via a 9-speed automatic transmission to a rear-biased all-wheel-drive system that features an electronically controlled limited-slip rear differential. Nearly all of the power can go to the rear wheels when needed.

Given its considerable girth, the DBX doesn’t quite have the immediacy of acceleration that you’ll find in the Vantage. But once it gets moving, the digits on the speedometer climb at an alarming rate for a vehicle this big. The engine pulls decently at low RPM but hits the sweet spot around 3,000 rpm, where the taps really open and the exhaust hits peak volume. It posts a sports car 0-60 mph time, but the power hits differently in this high-riding SUV where it creates a greater feeling of speed.

I was elated to find that the DBX nails a key part of the Aston driving experience: the soundtrack. The sport exhaust is a must-have option here, it produces a full-throated note that’s intoxicating both inside and outside of the vehicle. Even those who think they like peace and quiet on the streets will be convinced by the V-8 soundtrack pouring out of the DBX. I should have recorded it and set it as my alarm.

Underpinning the DBX are an adaptive air suspension and active anti-roll bars. Aston Martin claims that with the anti-roll setting dialed up to maximum it can reduce body roll to DB11 levels. That comes at the expense of ride quality, but even with the suspension dialed to its sportiest setting the ride never veers to punishing. Despite the impressively flat cornering, the DBX doesn’t quite have the grounded feel of a sports car; you get the sense that the electronics are working behind the scenes to solve each corner like a math problem. It is effective, but the process feels a bit cold.

I expected the nose to push given all of that weight, but I was surprised by the lack of understeer. The DBX does a very good job of tucking in and holding a line, and the quick steering is a highlight of the driving experience. Though, after an initial jolt of excitement, some of the emotion is lost at the apex. I’d like more feedback when rolling onto the power, but the DBX feels vague after initial turn-in.

The DBX I tested did all of this on a set of Pirelli P Zero Scorpion all-season tires, wrapped around stylish 22-inch black and satin wheels. The tires only protested slightly at the mistreatment I threw their way, and I imagine the available set of summer tires would only enhance the DBX’s handling bona fides. The DBX does a more than admirable job trying to replicate the experience of driving one of Aston’s sports cars, but you can only fight the additional ride height and weight so much.

The DBX is an absolute stunner from certain angles. Approach the natty crossover from the front and its familial heritage is plastered all across the nose thanks to the DB grille. Thankfully, it looks similar in size to the grille found on the DB11. Take note automakers: even if your vehicle gets taller you don’t have to yank your grille upward, throwing off the aspect ratio and giving it beaver teeth.

Start moving around the side and you hit the DBX’s best angle, the front three-quarter view where you can see the detailing on the hood and get a sense of its size. It may look a bit like a raised hatchback, but it’s definitely utility-sized inside, and the upright windshield and large front windows give the driver solid visibility to the front and sides.

In profile, the DBX is long and lean, with the cut of the rear glass feeding nicely into the roof spoiler. But as you continue to rotate things start to come apart. The two spoiler look doesn’t work here in the same way that it does on the Porsche 911 GT3, the duckbill-esque protrusion on the rear liftgate juts out awkwardly, and the high placement of the exhaust tips seems to throw off the proportions.

My test vehicle came with two exterior options of note: Royal Indigo paint out of Aston’s Q Palette of colors as a $9,100 option and 22-inch bronze and black stain wheels for $4,600. Spending that much on styling features usually makes my nose wrinkle, but in this case they felt justified. The two-tone wheels feature a spectacular but intricate design that will be rough to clean. The metallic paint changes colors in sunlight and shade, looking purple in some cases and a deep blue in others, but no matter the hue it turns heads with an unmissable sheen. Aston Martin opened up the big box of Crayola crayons for the DBX’s colors; 55 exterior paint options are found in the configurator.

Interior quality is another strength for the DBX, the materials are top notch, the seats are remarkably comfortable, and all of the controls are easy to spot and reach on the center stack with one exception. The Drive button is a bit of a stretch, which is a minor inconvenience.

Aston Martin mounts a 12.1-inch digital display behind the steering wheel, but it doesn’t offer much in the way of customization. A 10-inch multimedia touchscreen offers Apple CarPlay connectivity, but Android users (this author included) are left out in the cold to try to use the native system. That’s not ideal, as the built-in system is not intuitive though thankfully it is quick to respond to inputs. The system is based on Mercedes’ old COMAND architecture and it shows its age. The newer multimedia offerings from Mercedes (MBUX) and BMW (iDrive7) thoroughly outpace it, though to be fair, I’ve never heard of anyone locking in on an Aston Martin for the multimedia experience.

There’s plenty of backseat room for adult passengers, who also get an excellent view out of the standard panoramic sunroof that extends way, way back. The DBX can comfortably seat four, as a large floor hump and a raised seat bottom relegate the middle seat to occasional duty. Take a turn quickly and anyone perched up there will immediately slide into their seatmates.

The DBX starts at $179,986 after a price decrease. My test vehicle blew right past those figures with a number of options, some of which came with prices that made my eyes water. The crazy paint, upgraded 22-inch wheels, and sport exhaust ($2,300), I can get behind. But adding metal/composite trim inlays is also $4,600. Smoked rear lamps? Another $1,000. In total, my test vehicle ended up costing $220,986.

That price tag is still less than the one you’ll find on its close rival, the Lamborghini Urus, which starts at roughly that price. Dynamically, the edge in this fight goes to the Urus. It feels sharper and more twitchy, with greater acceleration and a noticeable edge in the handling department. But the DBX is no slouch. On a canyon road, it’s good for a smile (or ten), and for day-to-day drivability it has an advantage thanks to a more comfortable ride and a larger and more luxurious interior.

Thinking of these SUVs as compliance vehicles sells them short. Yes, there’s something strange about living in a world where Aston Martin makes an SUV, but it’s hard not to be wowed by the amount of engineering and performance packed into the DBX and the Urus. If the DBX allows Aston to continue to make sports cars that alone would be enough to justify its existence. But don’t let that distract you from the fact that it’s great.

Aston Martin provided a DBX loaner vehicle for Motor Authority to bring you this firsthand report.