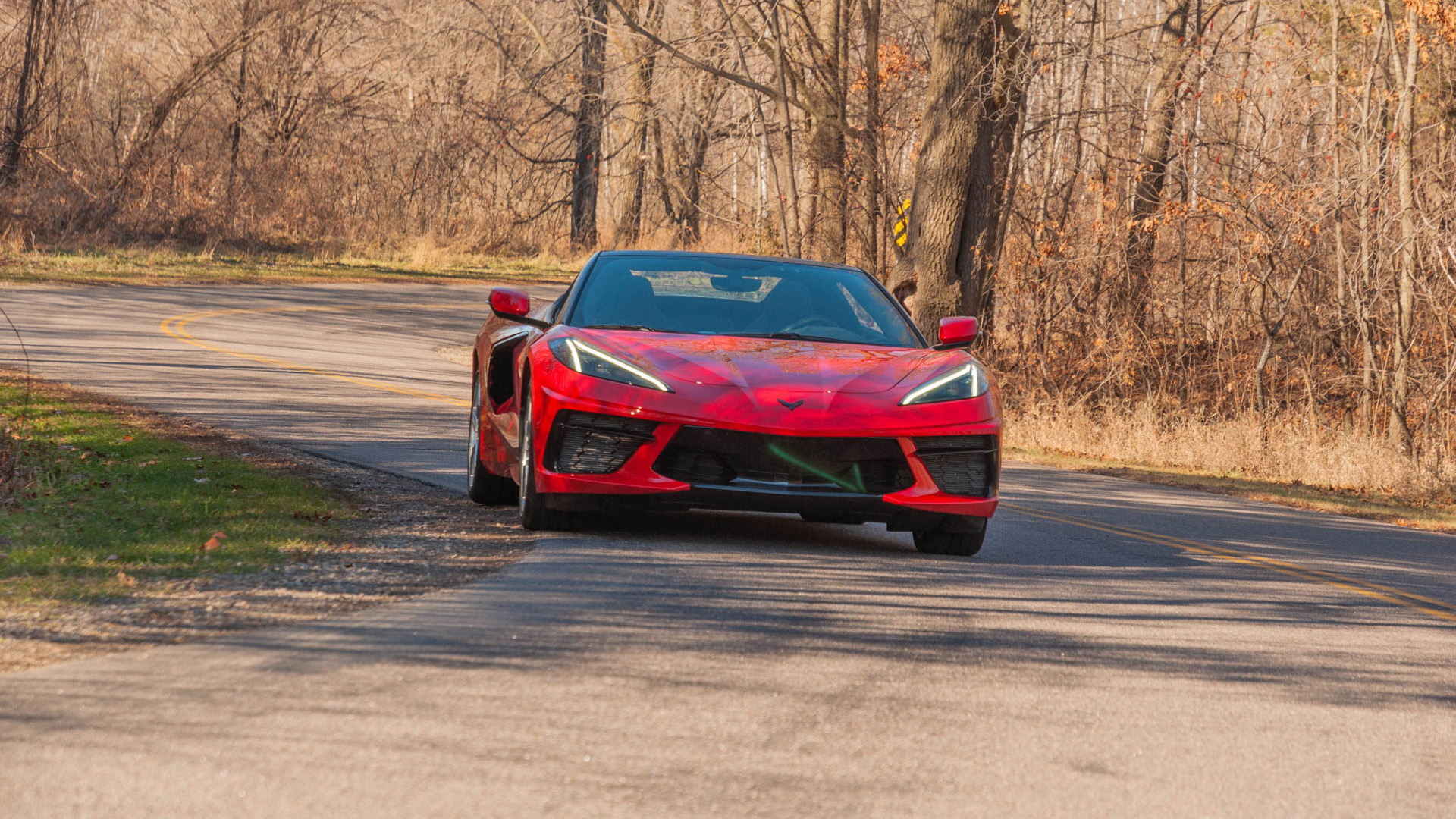 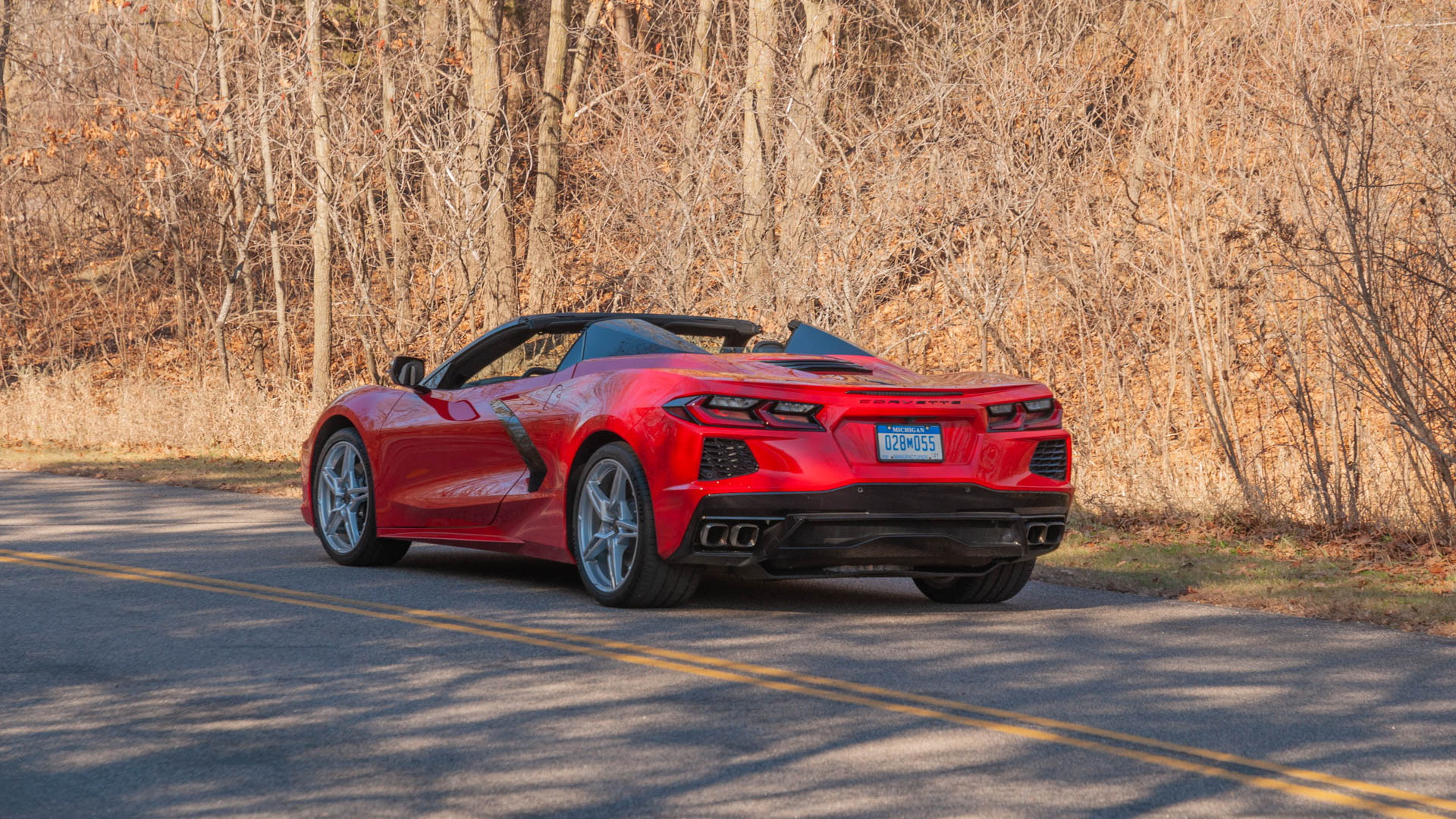 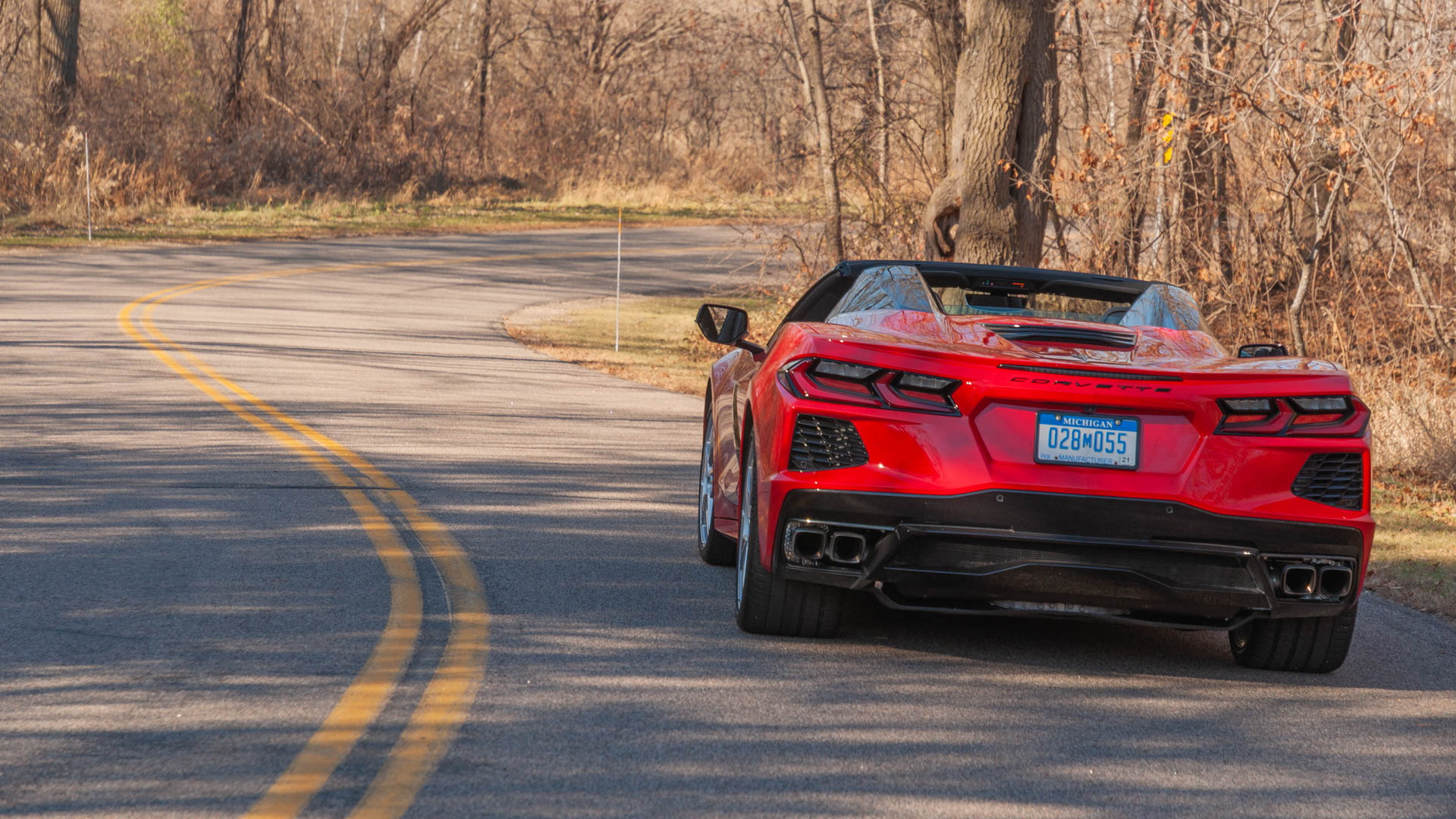 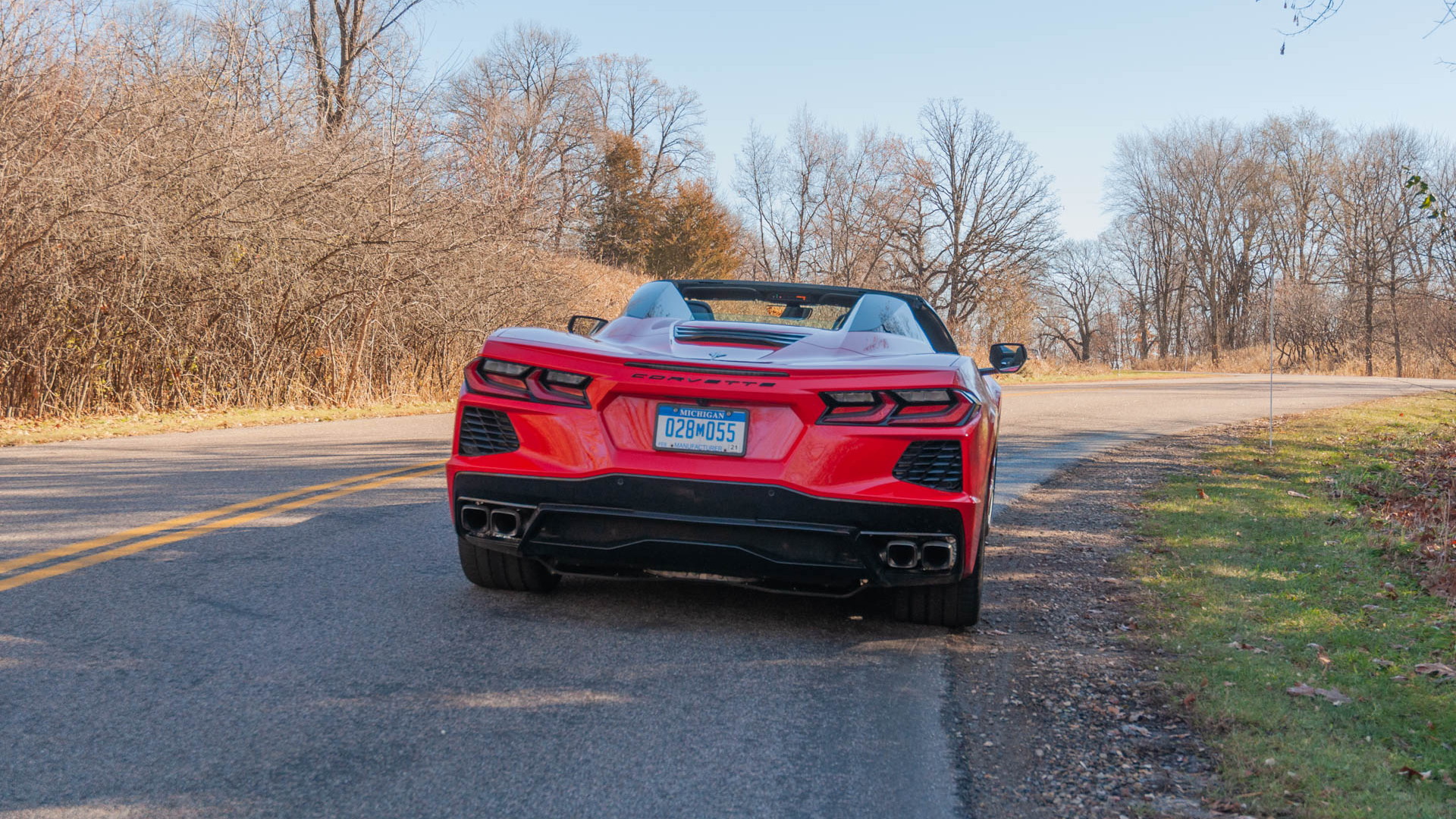 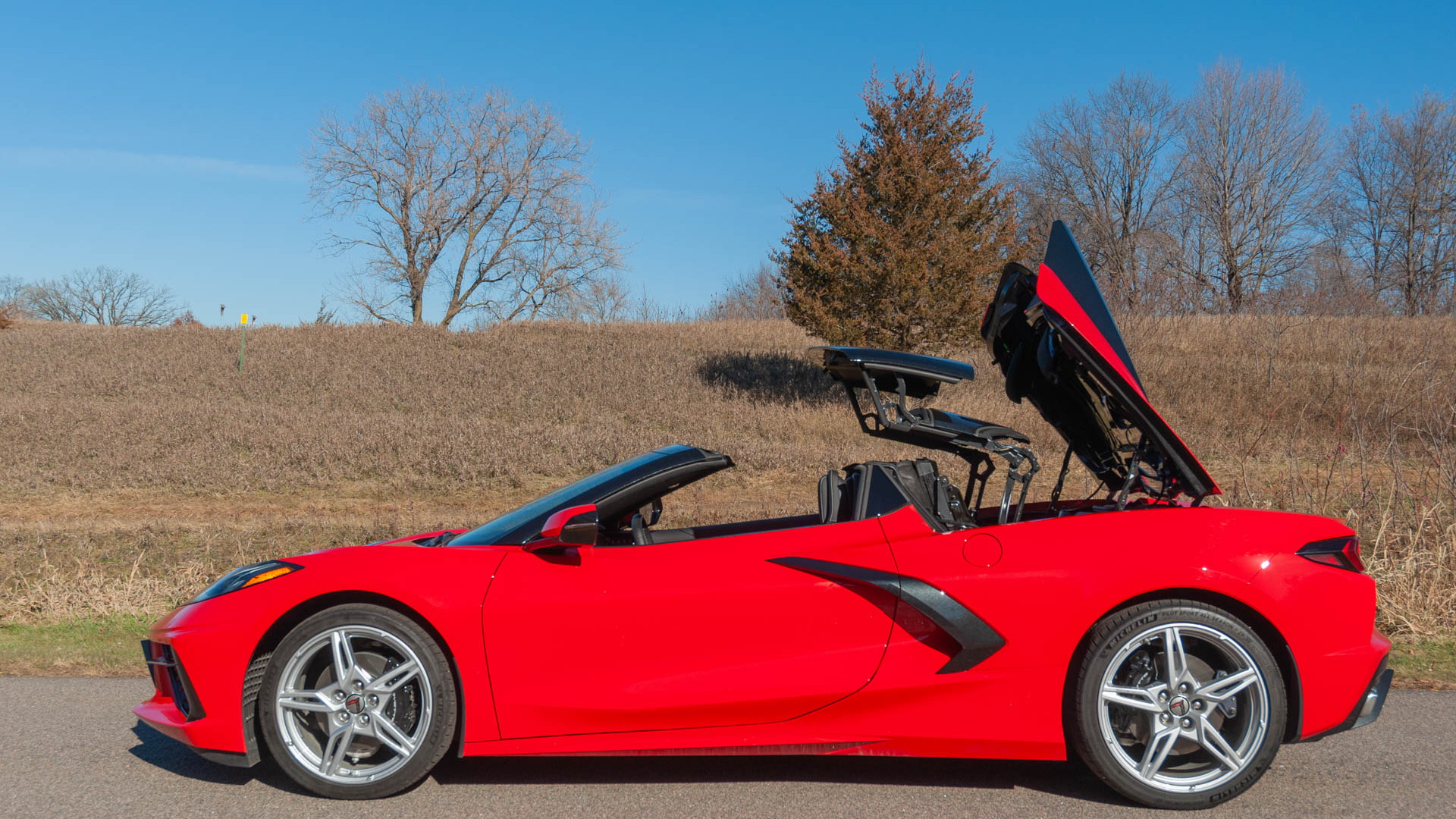 Before the 2020 Chevrolet Corvette was unveiled in 2019 I argued there was no point in America’s sports car morphing to a mid-engine layout. The C7 Corvette was a value and I predicted the price point would rise significantly if it went mid-engine. The C7 Corvette’s performance bar was already so high that it required a race car driver to extract the limits of the C7’s performance, especially the top-dog ZR1 model. Why move that bar further?

A Corvette should look like a Corvette, not a Ferrari. This is America’s sports car and it doesn’t hail from Italy, I said.

When it became apparent that a mid-engine sports car was indeed coming from Chevrolet, I argued it should be a true moonshot supercar called the Zora that would sit above the Corvette. I figured it would have an expensive price tag that would still undercut the Italians substantially.

I recently spent a week with the mid-engine Corvette, and it turns out I was wrong. I’ll say it louder for my wife: I was wrong.

I can’t believe this is a Corvette

It took just a few corners, a goose of the throttle, and less than three miles for me to be astounded by how far the Corvette has come. Turn-in response was sharp, the front felt light, the power was controllable and easily transmitted to the pavement, and the new weight distribution made the latest Corvette drive more like a mid-engine Ferrari than a C7 Corvette. But when taking a corner at speed, avoiding a pothole, or driving over broken pavement, the Corvette never felt as delicate as a Ferrari or the Acura NSX, which also has a mid-engine design. I wasn’t worried about breaking or bending anything. It just felt solid. It might be one of the best screwed together vehicles GM’s ever built.

I’m a sucker for the sound of a V-8 engine. The C7 Corvette ZR1’s supercharged 6.2-liter LT5 V-8 bellowed one of the best tunes of modern times, and doubly so at full throttle. The C8 Corvette’s naturally aspirated 6.2-liter LT2 V-8 sounds terrific, too, especially with the electronic valves open to uncork the full fury of my tester’s $1,195 performance exhaust system. However, it’s not as loud as the V-8s in previous Corvettes, especially the ZR1.

It still sounds like an all-American, all-star powerplant, and if it’s a little quieter that just makes the driving experience more relaxing.

The C8 Corvette can’t be had with a manual. Pour one out for the third pedal. But, the 8-speed dual-clutch transmission is, in a word, fantastic.

In Touring mode, the dual-clutch transmission shifts early and smoothly, and it stays largely in the background as it keeps the car moving forward. I preferred Sport mode because it raises the rpm for the shift points and provides slightly quicker shifts that aren’t as muted. Sport mode still allows the V-8 to shut down four cylinders to save fuel while cruising on the highway, so it seems like a Goldilocks mode to me. Track Mode wrings more out of the engine more with higher-rev shift points and even quicker shifts.

While this will sound sacrilegious, I didn’t miss having a manual transmission in the C8 Corvette. It wouldn't truly fit the car’s character and isn’t needed. The dual-clutch is a perfect partner for the mid-engine Corvette.

During my week with the 2020 Corvette convertible, I lost count how many times people asked me, “What kind of car is that?” Onlookers snapped photos with their iPhones, kids pointed, adults gawked, people followed me, and some drivers tried to race me. The best moment was the kid who’s jaw dropped like he had seen an alien spaceship as I rolled by.

The only vehicle I’ve ever driven that received this much attention was the electric Vanderhall Edison 2 three-wheeler. But this is a mass-production (it’s all relative) Chevy built in Bowling Green, Kentucky, not some low-volume three-wheeler or quarter-million dollar Italian supercar.

The 2020 Corvette convertible does and does not look like a Corvette.

The best angle is the head-on view. The sharp, pointed nose, low-slung headlights, and sculpted hood look great and play off hallmark Corvette design cues, but the gaping outer intakes give it a strong McLaren and NSX vibe. The rear end is kind of a hot mess with far too much going on to be called pretty. And why are the quad exhaust tips square?

The 2020 Corvette convertible offers a retractable hardtop for the first time. It’s a two-piece roof that folds under a tonneau cover at the press of a button thanks to six electric motors. The process takes 16 seconds and can be performed at speeds of up to 30 mph.

The hardtop provided a sense of security when running errands and impressive sound damping on the highway. Plus, my 4-year-old son thought the hardtop’s dance to fold away was just the coolest thing.

With the roof folded away, a pair of flying buttresses conceal the roll bars and direct wind away from the cabin. Between the power rear window and side windows, shockingly little wind enters the cabin when it’s 38 degrees outside, and it’s a rather calm place at speed on the highway.

It isn’t the car for lovebirds

The mid-engine Corvette isn’t the best vehicle for a date night. It’ll compete with your significant other for who is prettier and gets more guys’ attention. It’s also not the best place to show your sweetie affection. A handle-like bar that houses the climate controls protrudes from the dash and bisects the cockpit, cocooning the driver and passenger in their own spaces. Reaching over it to hold hands would be uncomfortable and awkward.

That long line of climate system controls is easy to navigate while driving, and it looks much better in person than in photos.

The square steering wheel also makes perfect sense. It gives the cockpit a race car feel, and provides an unobstructed view of the digital gauge cluster. It also promotes a 9 and 3 o’clock hand position, which is best for control.

I’ll say it again for the history books: I was wrong. With a base price of less than $60,000 for the coupe (which is really a Targa) and $67,495 for the convertible, it’s easy to make an argument why the C8 lineup is a bargain.

The Corvette is priced like a Porsche Boxster or Cayman, but it has far more power from its V-8 than they draw from their turbo-4s and even their more-expensive flat-6s. The new Corvette is faster than those cars, a better value, and is just as fun to drive.

The C7 ZR1 remains the ultimate Corvette as it had limits far beyond the reach of mere mortals and could destroy European supercars that cost twice as much. However, we’ve yet to see the new Z06 and ZR-1 variants of the mid-engine Corvette, and if they take the leap forward this car has, we’ll have a new Corvette king of the hill.

For now, it’s not all about performance. The C8 is a better all around car than the C7 it supersedes. It feels more expensive than it is, it has a far nicer interior, and it delivers a fantastic driving experience. I was wrong.

The new mid-engine Corvette is a Ferrari for everyone else. It’s the everyman’s sports car built in America and it isn’t afraid of any rival from anywhere in the world. That's what the Corvette was always supposed to be.