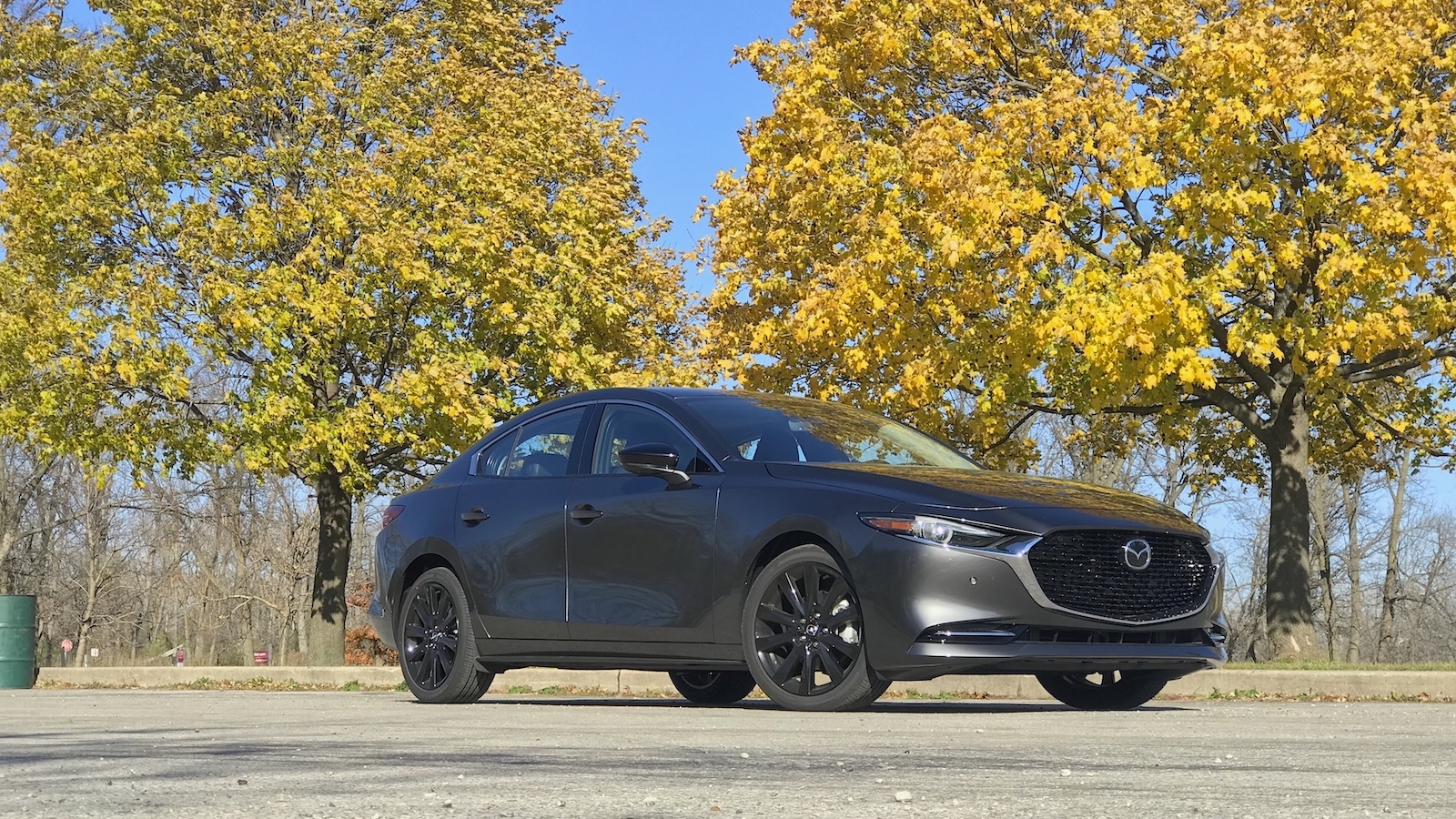 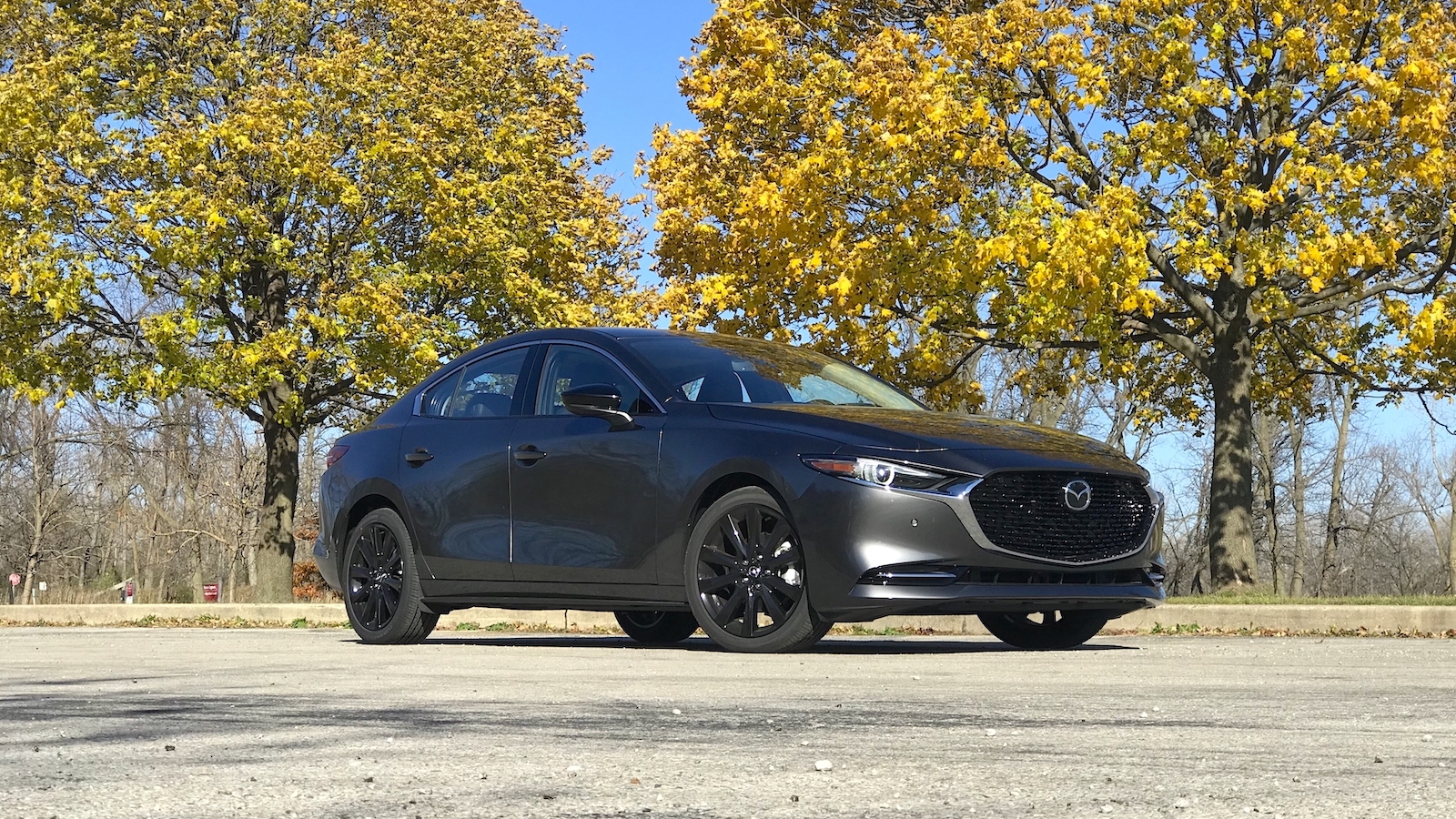 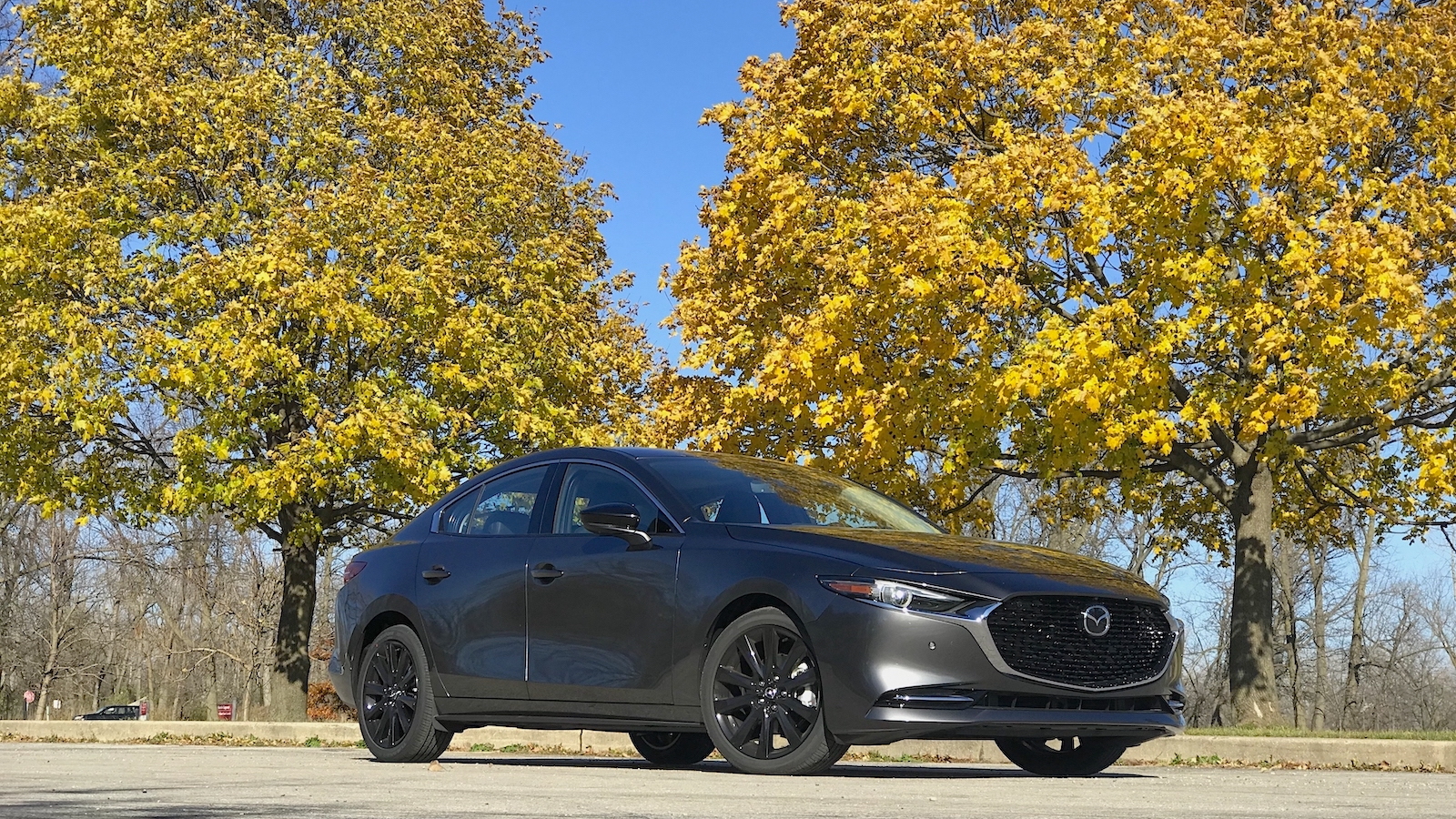 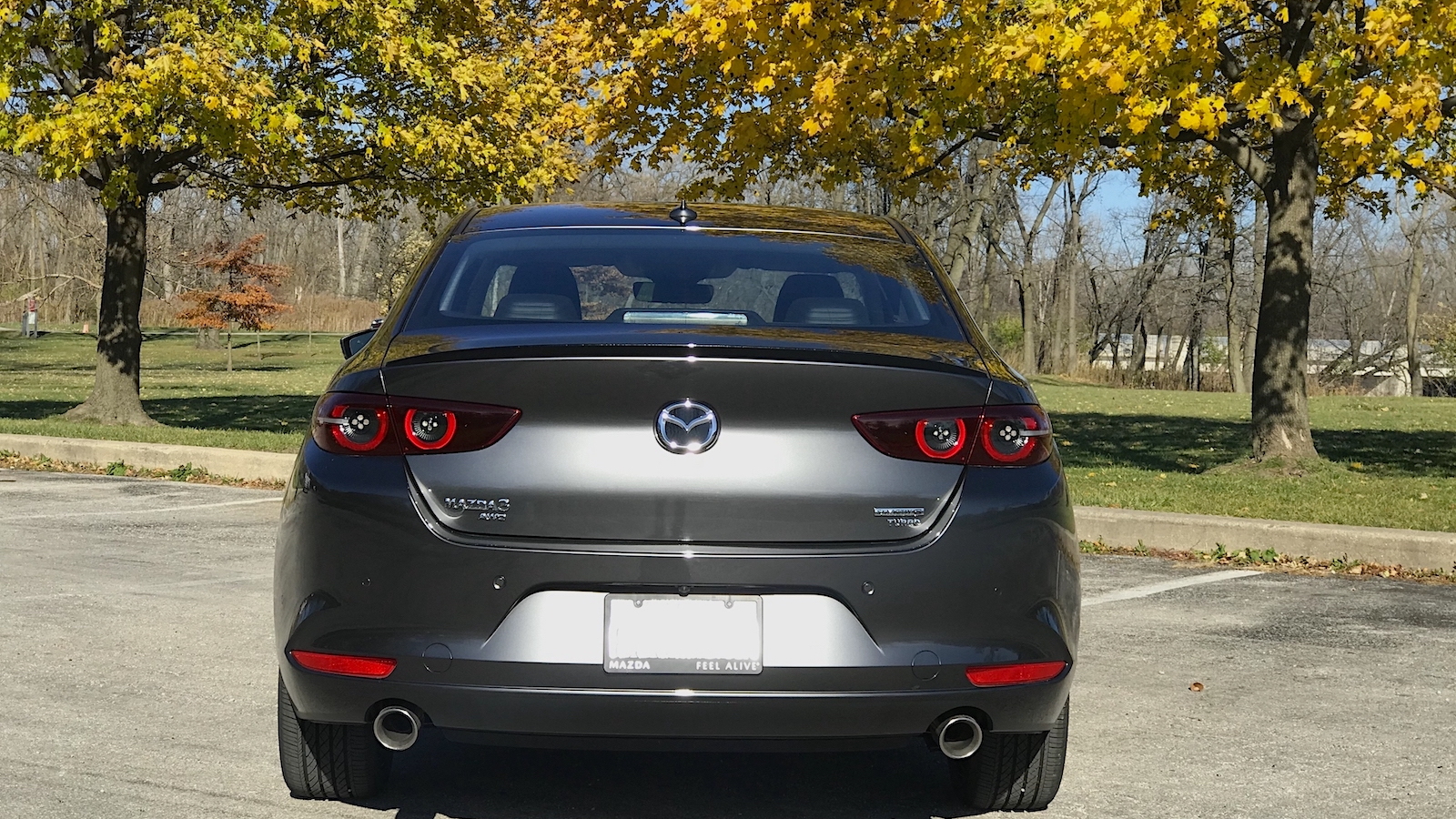 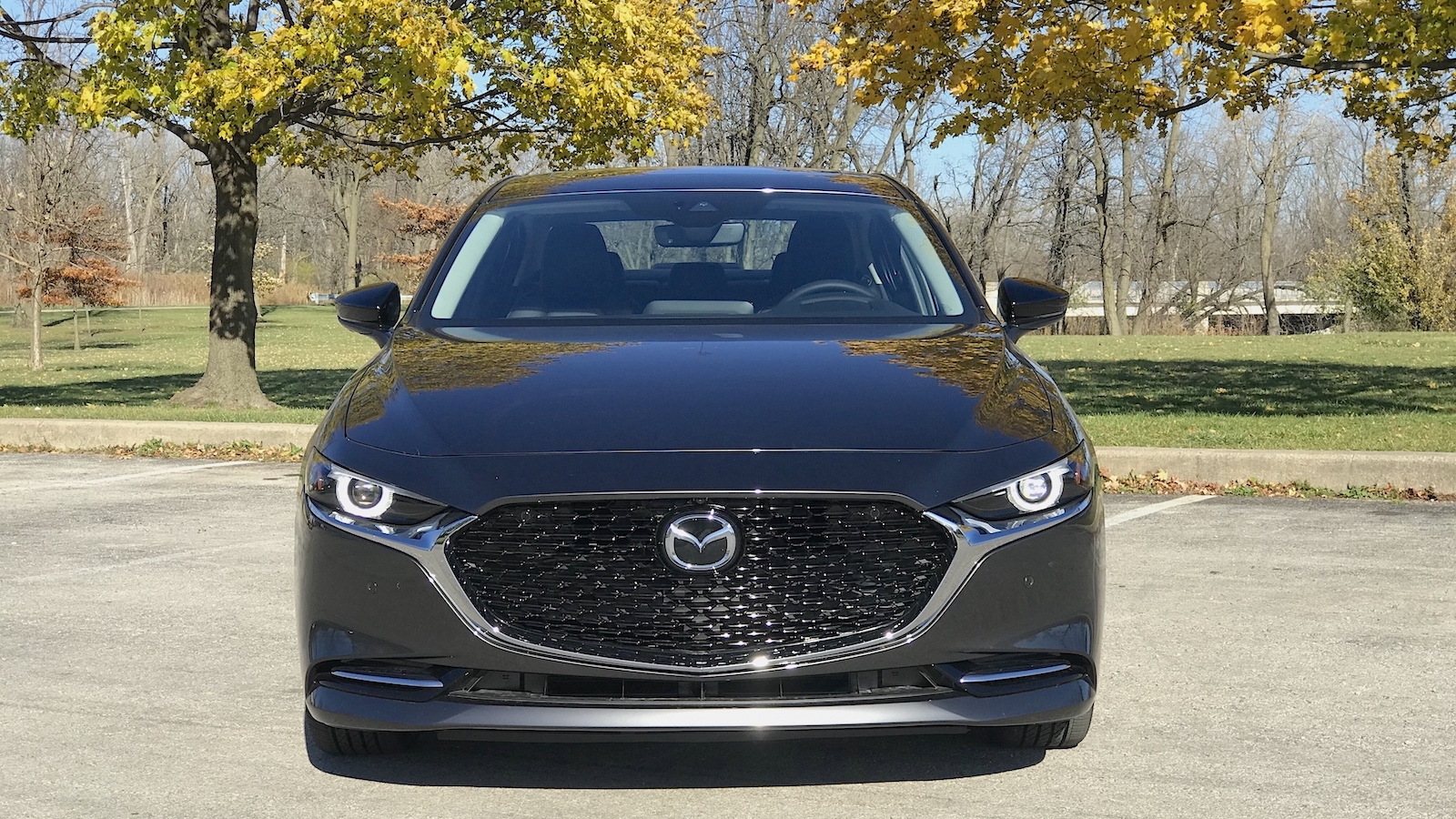 A 2021 Mazda 3 2.5 Turbo just arrived for a two-day loan and it’s time for the test Mazda fans have been anxiously awaiting. If I remember my turbocharged Mazda 3s correctly, a deep stab of the throttle should induce a swell of power followed by rampant torque steer from the car and impulsive giggles from me.

Nothing of the sort happens when I pin the accelerator—no building wave of power, no hold-on-for-dear life torque steer, no raucous screams from the engine. Instead, the power arrives in a well-mannered and orderly fashion, the engine note rises to a mild hum, and the front tires stay dead straight.

The new Mazda 3 2.5 Turbo has 227 horsepower, 36 less than the ’Speed3 that died after the 2013 model year, but much more torque at 310 instead of 280 pound-feet (it makes 250 hp and  310 lb-ft on the 93 octane that few buyers will use). However, this car has all-wheel drive instead of front-wheel drive and its engine has gone to finishing school while the previous powerplant was clearly doing time in juvie.

The 2021 Mazda 3 2.5 Turbo is no hot hatch/sedan. Rather, it’s a pleasant compact car aimed at taking the Mazda 3 upmarket where it can play with the likes of the Mercedes-Benz A-Class and CLA-Class, Audi A3, and Acura ILX. That mission shows in more than just the car’s throttle response.

No need for ’Speed

Those hoping the Mazda 3 2.5 Turbo would be the spiritual successor to the MazdaSpeed 3 can go on hoping. Instead of making another hot compact, Mazda said its goal with the 2.5-liter turbo-4 was to create the abundant, torque-rich feel of a naturally aspirated V-6.

Mazda puts a lot of technology into the engine to make it act that way. Like other turbo-4s, it has direct injection and variable valve timing, but it also employs unique intake and cooling strategies, and runs at a high compression ratio.

Turbocharged engines usually have a compression ratio of about 9:1, and the 2.5’s 10.5:1 ratio would usually produce too much knock. To solve that issue, Mazda gives the engine an unconventional cylinder head with a four-to-three-to-one exhaust runner design that begins within the head. This works like a long-tube header to scavenge as much heat out of the exhaust stream as possible before it enters the turbocharger. The intake air is also cooled by a water-to-air intercooler that is located not up front by the radiator but in the intake manifold itself along the side of the engine. This strategy also pulls along cooler fresh into the intake of the next cylinder, which also helps the engine run cooler and reduce knock.

Direct injection helps reduce turbo lag, but Mazda went a step further to help the turbo provide power across the rev range. Mazda calls it the Dynamic Pressure Turbo system, and it features an ejector valve with a flapper door to change how exhaust gases are directed into the turbo. Off idle, the door is closed, directing the air through small orifices that create higher exhaust gas flow velocity for quicker spool up. At about 1,600 rpm, the flapper door opens to direct the air to larger ports, eliminating any back pressure, and letting a higher volume of air into the turbo. The engine runs this way up to its 6,300-rpm redline.

Consider the V-6 goal achieved. Just as the 2.5-liter turbo-4 doesn’t suffer the turbo lag problems that can sometimes plague mainstream turbo-4s. The throttle feels like an extension of my right foot, not with overwhelming immediate response, but with progressive, natural response. The car doesn’t jump off the line from a stoplight, but reacts with more maturity and is as strong as my inputs require.

Mazda isn’t quoting a 0-60 mph time, but it’s probably around 6.0 seconds, which is about the same as the beloved MazdaSpeed3. I detect a touch of coarseness, and Mazda uses the speakers to enhance some of the engine sound, but this engine has none of the internal combustion fracas of that old hot hatch.

The turbo-4 is as responsive on the highway as it is in traffic. It cruises along largely undetected, then responds with all due vigor when I ask for passing power. The 6-speed automatic transmission matches the engine, staying in the background until crisp, smooth downshifts are needed.

Mazda stokes a bit more excitement with its Sport mode, which perks up the engine responses and holds gears longer. Sport makes the power easier to access, but it still doesn’t approach the high-strung character of the bygone MazdaSpeed3.

The horse and rider concept extends to the handling, though in this case the horse is trained for dressage: athletic, composed, and refined, but not aimed at ultimate agility.

The Mazda 3 2.5 Turbo’s engine weighs about 120 pounds more than the naturally aspirated version in the Mazda 3 2.5 S models. While the front springs are 15% stiffer, it’s only to handle the extra weight and keep the same frequencies. The dampers are adjusted for the weight as well, and to make handling slightly more responsive. Mazda also strengthened the steering arm (a change that’s rolling out to all Mazda 3s), changed the steering calibration to add a little more heft, and beefed up the rear differential so the all-wheel-drive system can deliver three times as much power to the rear. The differential is the only change that really affects handling as it helps the car better lay down its power when exiting a turn.

Notably, the Turbo models get the same torsion beam rear suspension as the other models. An independent multi-link rear suspension would aid both ride and handling, but the ride doesn’t seem worse for it; I don’t feel the car transferring the effects of bumps and ruts from one side to the other.

Mazda reprogrammed the car’s handling software as well. The brand’s G Vectoring Control Plus system anticipates what the driver wants and does subtle things like dial back power output, which shifts power forward slightly to create more tire contact patch in a turn. It also tells the transmission to downshift during braking in anticipation of corners so the car’s balance won’t be upset in the middle of a turn. The version in the Mazda 3 2.5 Turbo shifts slightly more weight up front so the car will turn more crisply.

All of this adds up to little change from other Mazda 3s. The dampers are tuned more for comfort than handling, and the car corners more with pleasant competence than exhilarating agility. That’s often the character of an entry-level luxury car.

The same could be said of the cabin, where soft-touch, often stitched surfaces adorn most of the touch points, including the sides of the center console that can dig into knees. The soft-touch surfaces are offset by piano black trim and smart bits of chrome.

Mazda outfits the 2.5 Turbo like an entry luxury car as well, offering it with such standard equipment as a Bose 12-speaker audio system, a sunroof, synthetic leather upholstery, heated front seats and a heated steering wheel, and an auto-dimming rearview mirror. While the infotainment system comes with an 8.8-inch screen and Apple CarPlay and Android Auto compatibility, it is one of our least-favorite systems. The screen lacks touch controls and too many steps are needed to perform simple tasks using its center console-mounted rotary controller. I just give up and use a combination of Apple CarPlay and voice commands.

For the $30,845 starting price ($31,845 for the hatchback), the Mazda 3 2.5 Turbo also comes standard with a variety of driver-assistance features, including automatic emergency braking, lane-departure warnings, active lane control, adaptive cruise control, a driver-attention monitor, and blind-spot monitors with rear cross-traffic alerts. Unique exterior bits consist of a gloss-black grille, a revised front air dam, a black roof spoiler on the hatchback, and 18-inch black alloy wheels. Mazda says the premium for the 2.5 Turbo model is $1,650 compared to a 2.5 S model with the Premium package. However, that model includes leather upholstery and navigation, while the Turbo has a heated steering wheel. I figure the difference is more like $2,500 to $3,000.

The premium buyers will pay for the 2021 Mazda 3 2.5 Turbo brings with it satisfying but not exciting power. The rest of the car plays off that theme: satisfying but not exciting. The new Mazda 3 2.5 Turbo is no juvenile ’Speed3 but instead a worthy competitor for entry-level cars from luxury automakers. However, it doesn’t carry a luxury badge and the cachet that goes with it. Will it be able to capture those buyers? Mazda may find that its fans prefer a wild streak more than maturity.

Mazda dropped off a 2021 Mazda 3 2.5 Turbo with contactless delivery for two days so we could drive it alone—so alone—during a pandemic.