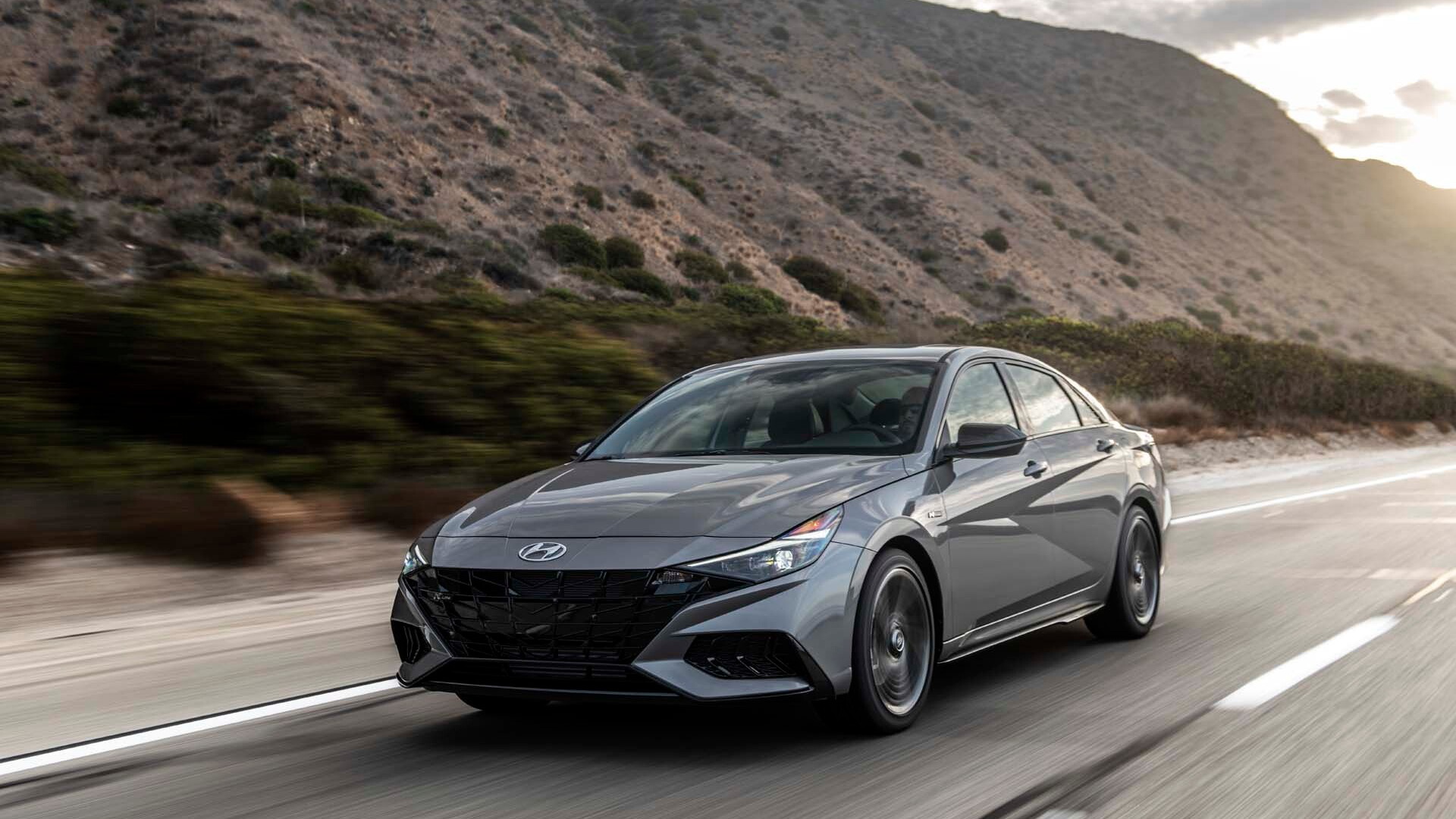 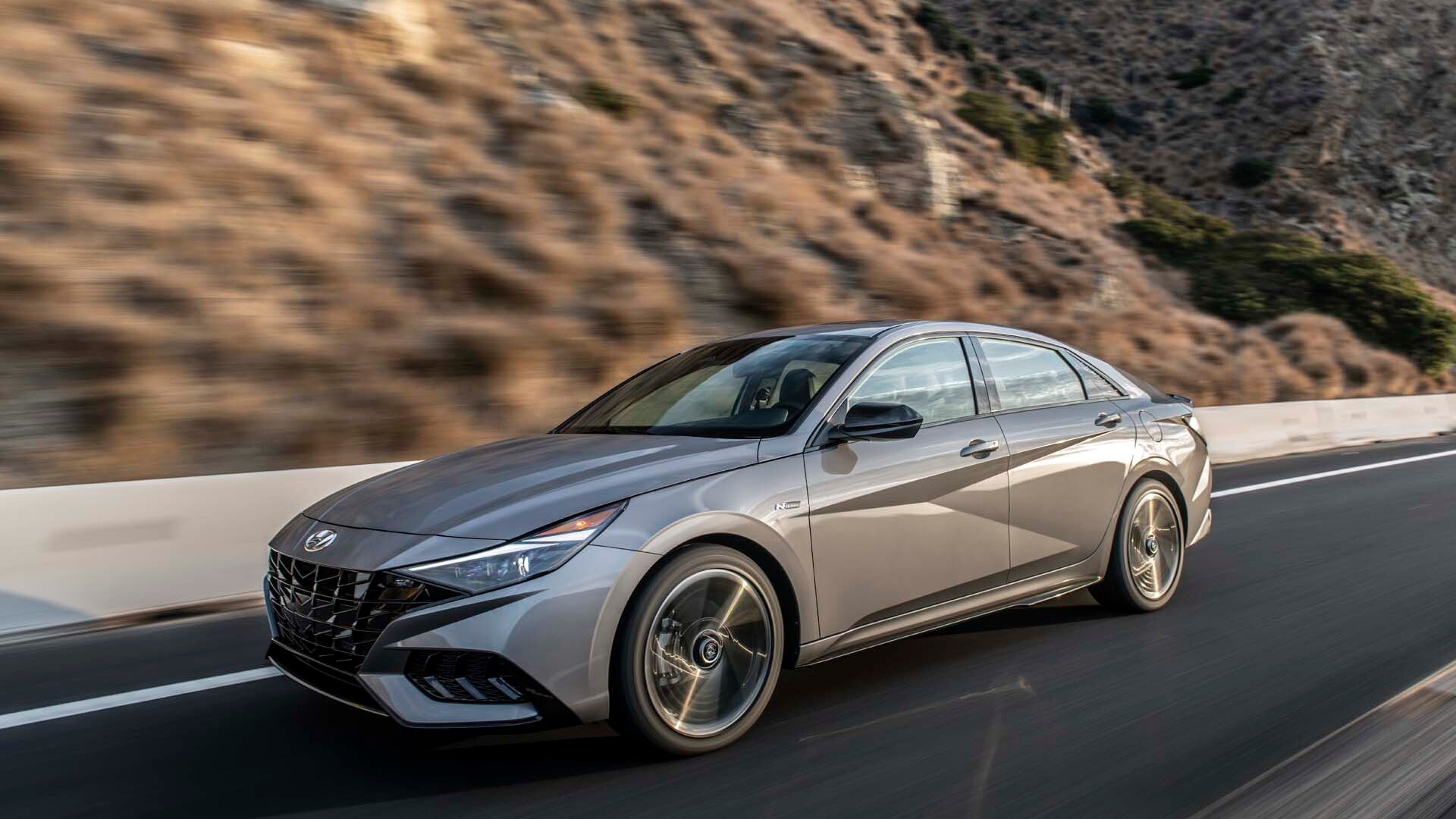 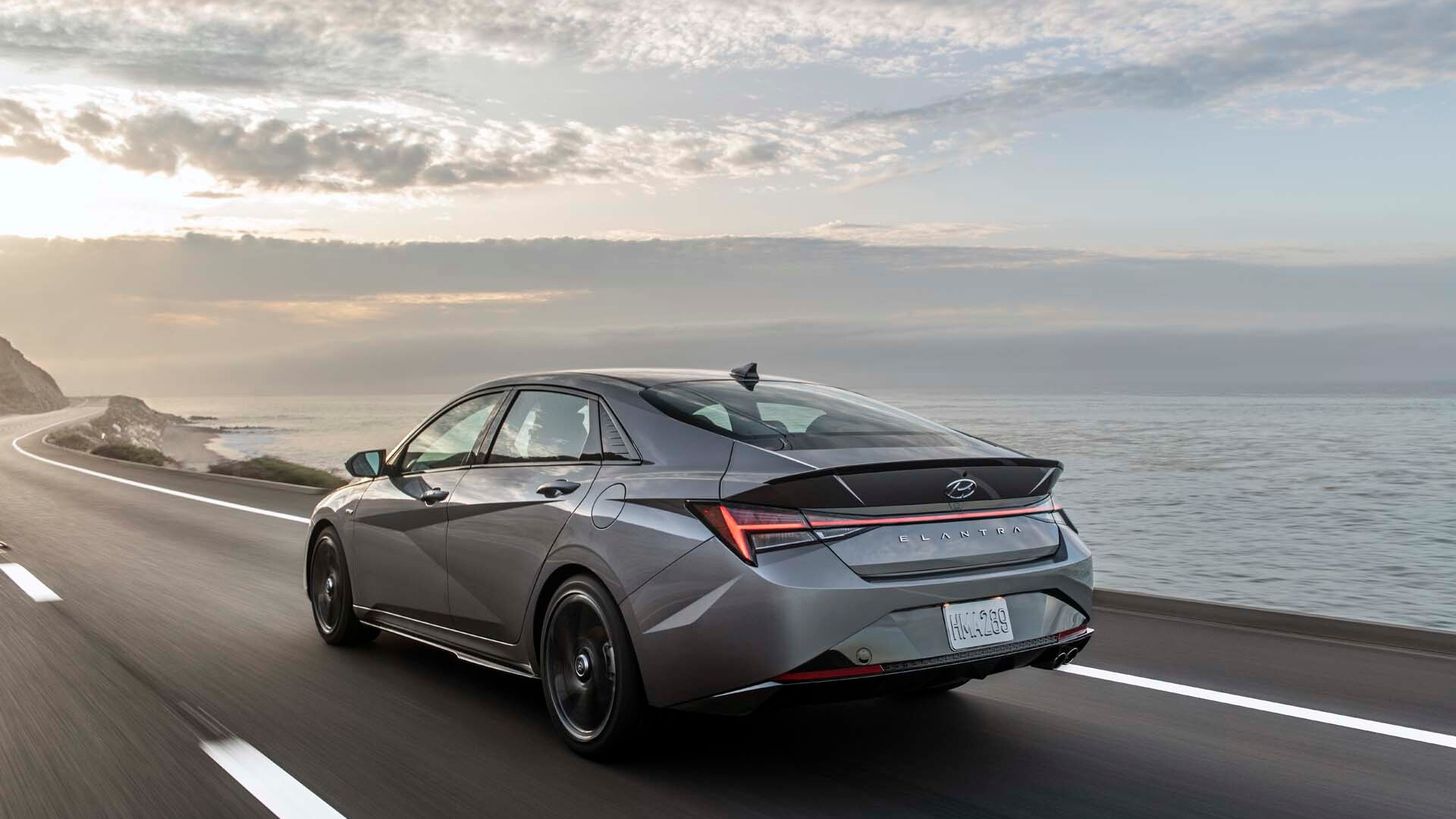 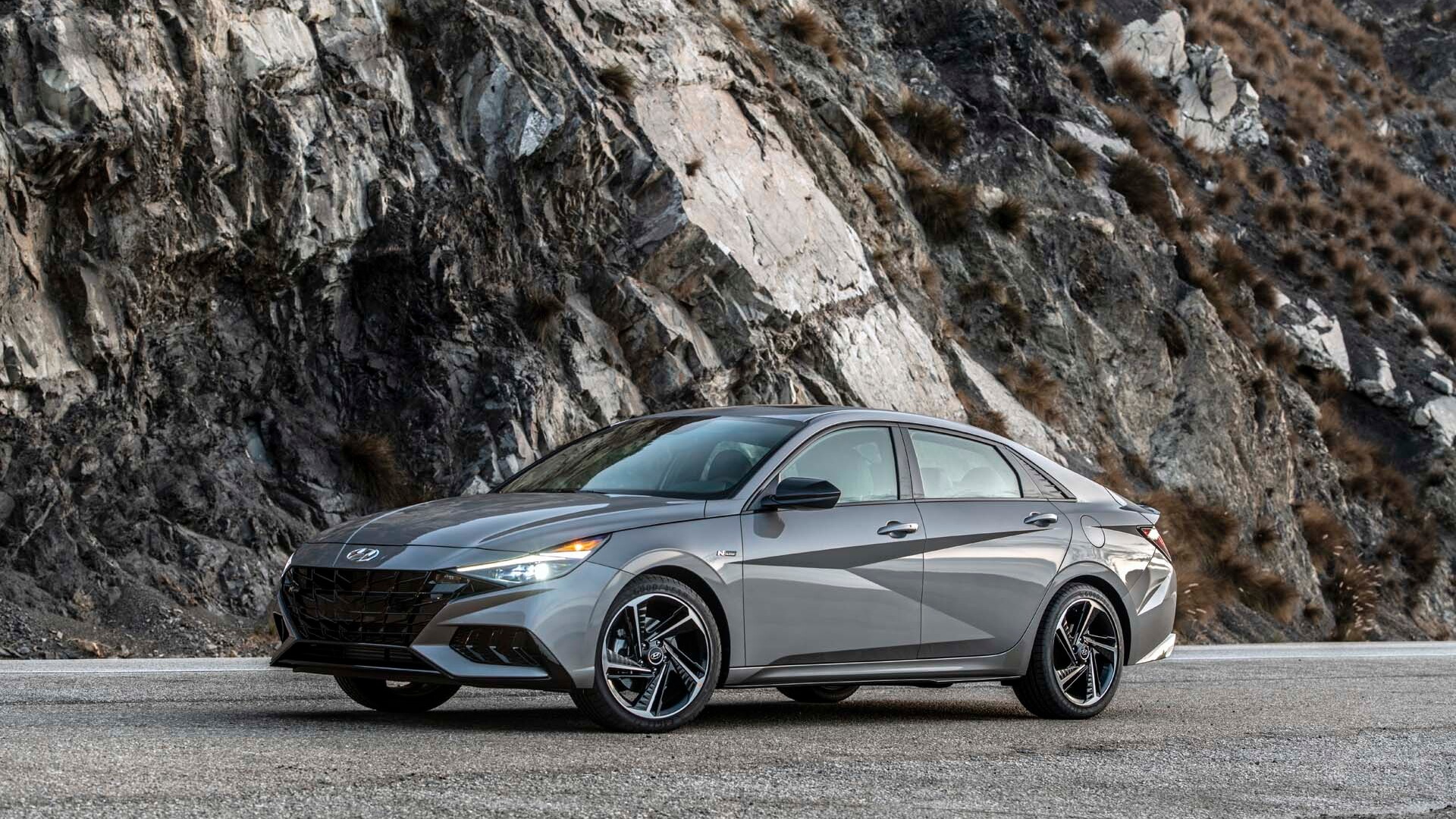 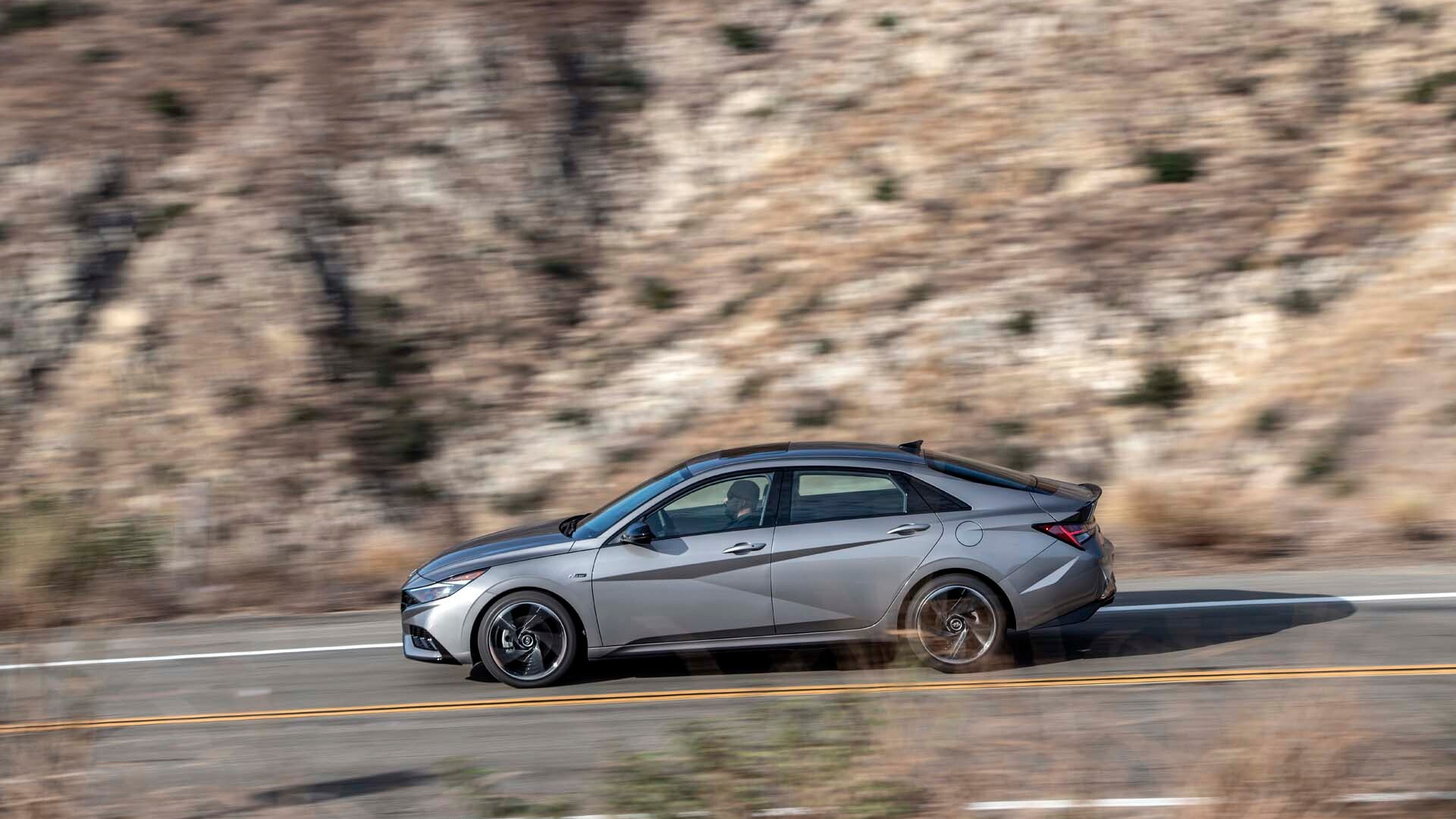 Hyundai’s reputation as a maker of value-oriented, but boring cars with big warranties has evolved in recent years as the company introduced cars with reasonable price tags and excellent driving chops. Cars like the Veloster Turbo R-Spec, Veloster N, and Elantra GT N Line are fun to drive without breaking the bank. That group welcomes a new member to Hyundai’s cheap speed lineup: the 2021 Elantra N Line.

The Elantra N Line debuts alongside the fully redesigned Elantra and Elantra Hybrid, and it functions as a replacement for two vehicles in the Hyundai lineup: the Elantra Sport and the aforementioned Elantra GT N Line, both of which were discontinued for 2021.

Though the Elantra N Line adopts the sharpened styling and technology updates found in the new Elantra, the powertrain is adopted directly from the outgoing Elantra GT N Line. It’s essentially the same engine and transmission, just in a new wrapper and riding on a new chassis. This left me guessing what I’d find behind the wheel of the Elantra N Line, because the Elantra GT N Line had a problem with torque steer that I was hoping the new car could solve.

Under the hood is the familiar 1.6-liter turbo-4 that makes 201-horsepower and 195 pound-feet of torque. A 6-speed manual transmission is standard, with a 7-speed dual-clutch automatic available as a $1,100 option. (The same engine was also in the Elantra Sport, but that car was automatic only.)

I was a fan of this powertrain from previous testing. Power comes on early in the torque curve, providing ample responsiveness. Hyundai has figured out over the past few years how to make a decent manual transmission as well. Clutch action is on the lighter side, but it’s easy to find the take-up point and there’s virtually no learning curve even when driving it for the first time. I do wish the Elantra N Line would borrow the shorter throw sport shifter found in the Veloster Turbo R-Spec, but the regular stick works fine and shifts just take a split second longer.

Hyundai provides an incentive to opt for the manual transmission. Not only is it less expensive, it’s also the only way to get summer tires from the factory (235/40 R18 Goodyear Eagle F1s). Models with the automatic transmission get all-season tires instead, and since I live in Southern California I’ll take the manual and the summer tires that I can use year round.

My only nit to pick with the manual transmission is its first gear. It’s easy enough to get the Elantra N Line going at a normal rate of speed but if you want to launch it harder, the engine bogs. Acceleration feels sluggish in that 0-10 mph range before the power perks up. I did not see any traction control lights in the gauge cluster, so it wasn’t cutting power to the wheels. It feels like an issue with the gearing. After that, the car is happy to zip around and with those grippy tires it puts power to pavement efficiently.

Though the powertrain is familiar, the all-new chassis gives the Elantra N Line the chance to separate itself from its predecessors. The N Line also receives some key upgrades over the standard Elantra, including springs that are 26% stiffer up front and 71% stiffer in the rear, stiffer engine mounts, a multi-link independent rear suspension, an added rear stability bar, and larger front brake rotors.

These changes give the Elantra N Line an added tautness not found in the standard Elantra and the rear end is much better sorted in corners. With the less sophisticated torsion-beam setup found in most Elantras, the back end feels like it’s being dragged through turns and fighting against the front end while the front wheels try to put the power down. On the N Line, suspension stiffness is similar to the Civic Si; it’s not sports car taut but provides a happy medium between everyday comfort and responsiveness.

The new platform also contributes to agility with lighter weight. The Elantra N Line with the automatic weighs 3,020 pounds, 111 pounds lighter than the 2020 Elantra Sport with the same powertrain.

I’m confused as to why the Elantra N Line still doesn’t have a limited-slip differential, something you’ll find on its closest competitors, the Honda Civic Si and Volkswagen Jetta GLI. That bit of hardware would provide an easy fix for the torque steer issues that hamstrung the outgoing Elantra GT N Line. Without some kind of LSD or torque vectoring, I was afraid torque steer would make its way over to this car as well.

However, I was pleasantly surprised to find that torque steer is much less of an issue. It did pop up occasionally, but not nearly as violently and I was able to apply power on corner exits with much less tire chatter and instability from the front end. I don’t think it comes down to tires; the Elantra GT N Line I tested had Michelin Pilot Sport 4 summer tires which are suitably grippy as well. There must be something about the new chassis and suspension orientation up front that’s making the front end behave better, but even Hyundai engineers that I asked didn’t have a ready explanation for the difference.

Whatever the reason is, it’s easier to enjoy driving the Elantra N Line with gusto and letting the engine really wind out on corner exits.

The Elantra N Line picked a good time to make its debut with the Civic Si getting set to take a hiatus for the 2021 model year before returning along with the redesigned Civic for 2022. That gives the car freer reign over the sporty compact sedan market for about a year or so until the Civic returns.

It’s also priced to fire a shot across the Civic Si’s bow, starting at $25,095 including destination, which makes it roughly $1,000 cheaper than the 2020 Civic Si’s starting price The Civic Si does come with some additional performance equipment, including an adaptive suspension and an LSD, and its manual transmission is a bit tighter. But I’d give the Elantra N Line a big edge on technology and interior quality. With standard wireless Android Auto and Apple CarPlay, it’s easier to live with day to day.

The real test for the Elantra N Line will be when the Civic Si comes back in a year or so with new tricks up its sleeve. For now, the driving experience is so similar that the newer Elantra N Line has a leg up due to its price and equipment. However that fight ends up, I’m just excited Hyundai’s latest entry in the cheap speed game costs less than $30,000 and is genuinely fun to drive.

Hyundai provided a vehicle and lodging for Internet Brands Automotive to bring you this firsthand report.