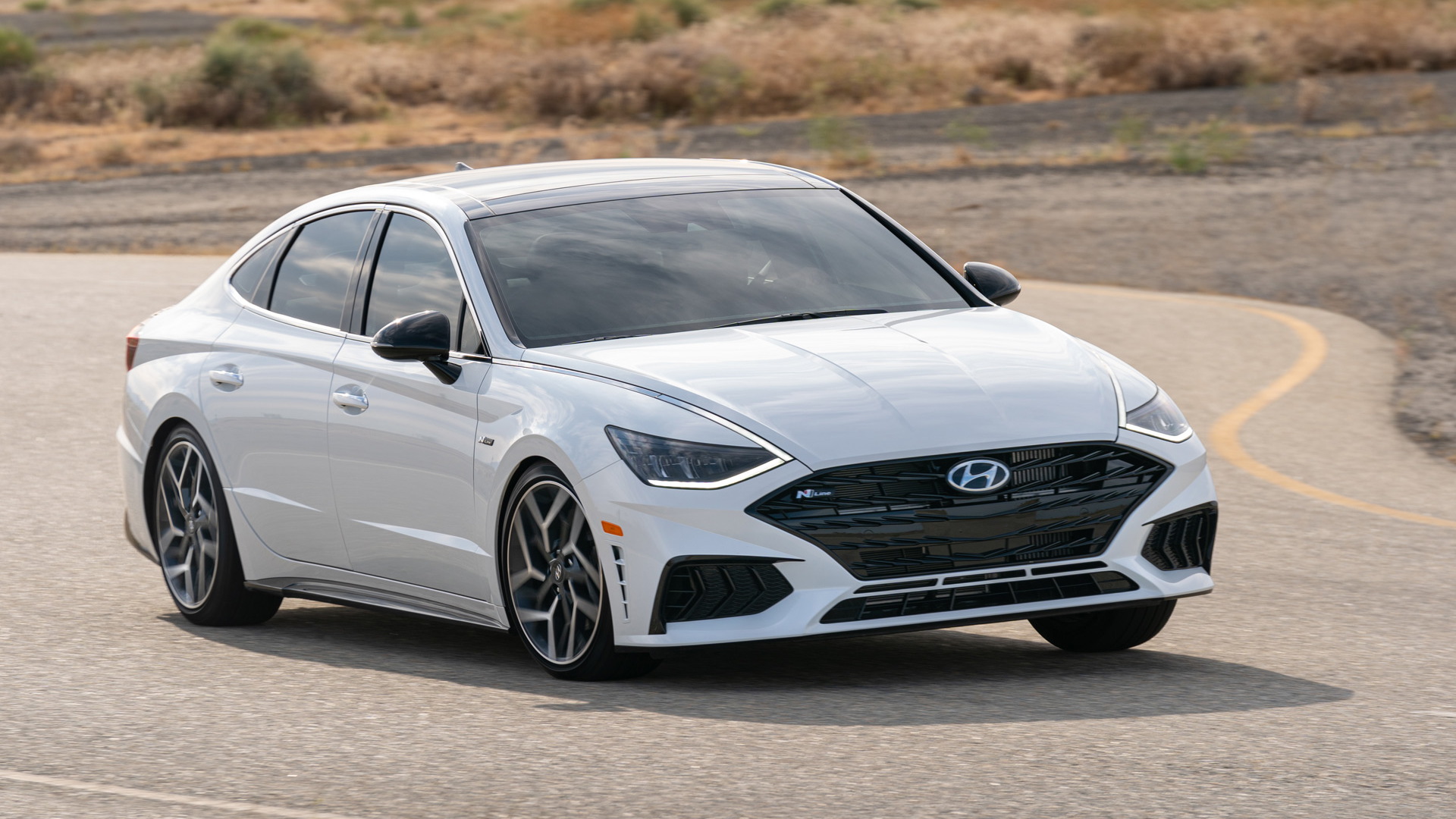 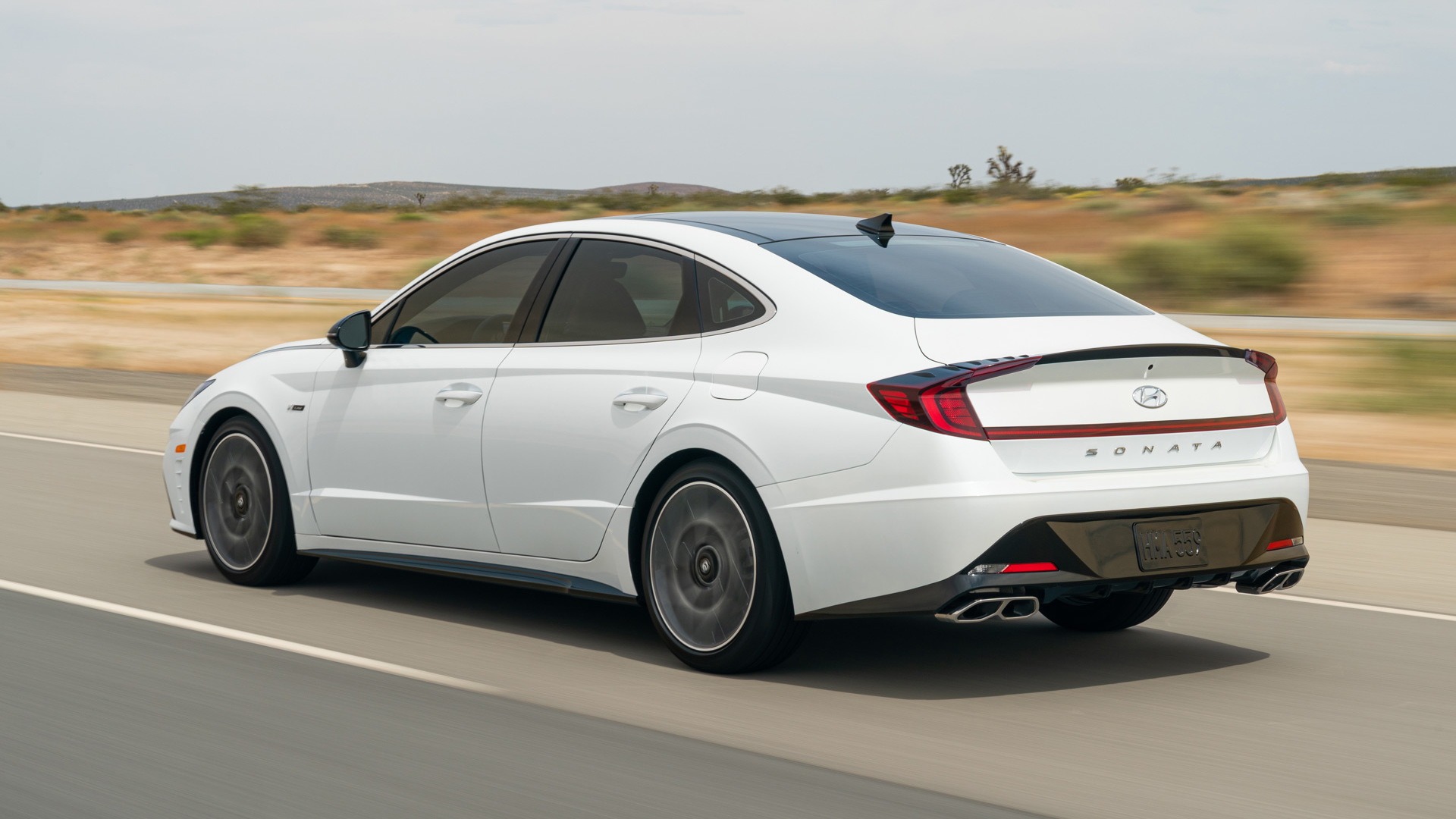 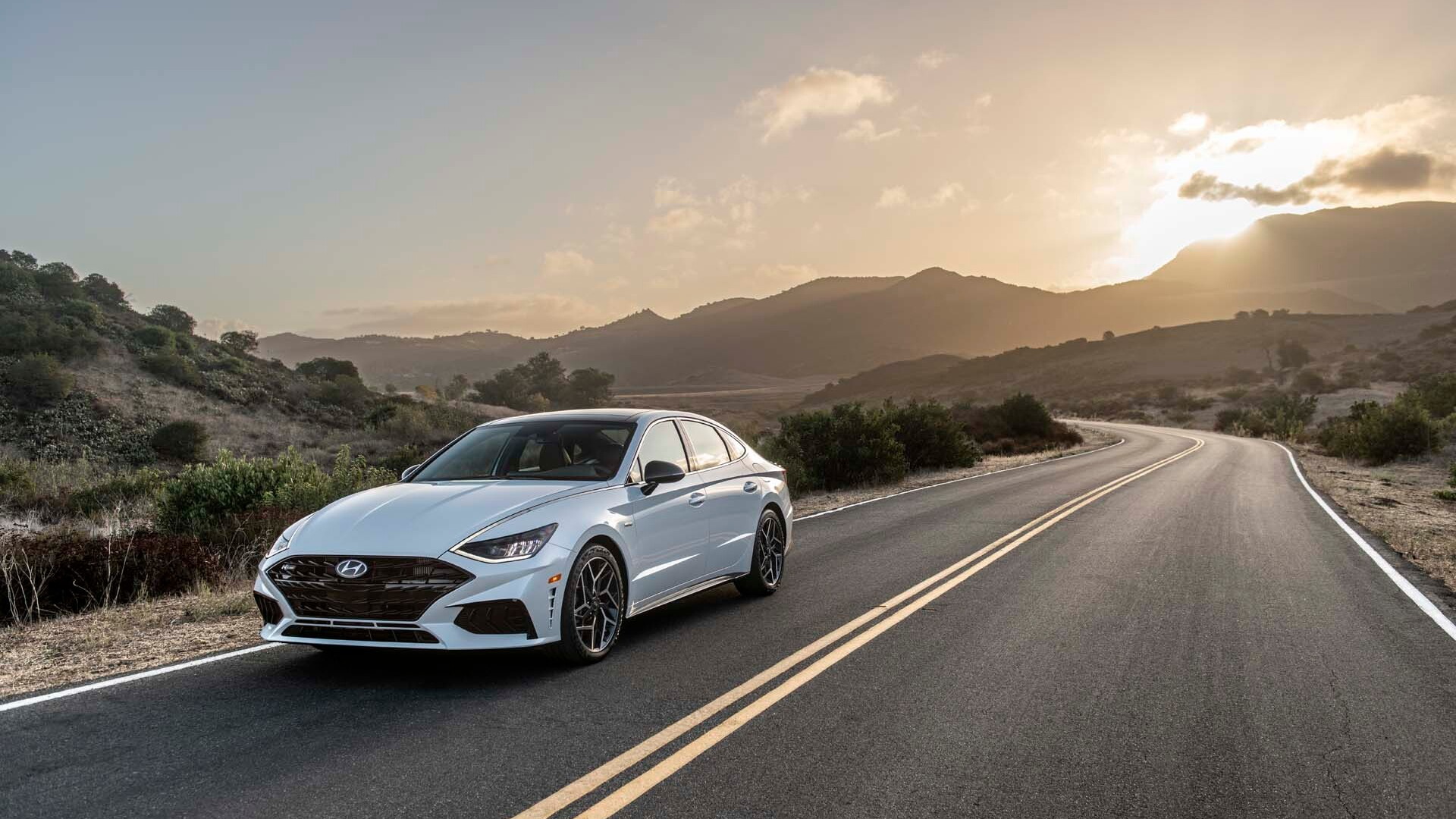 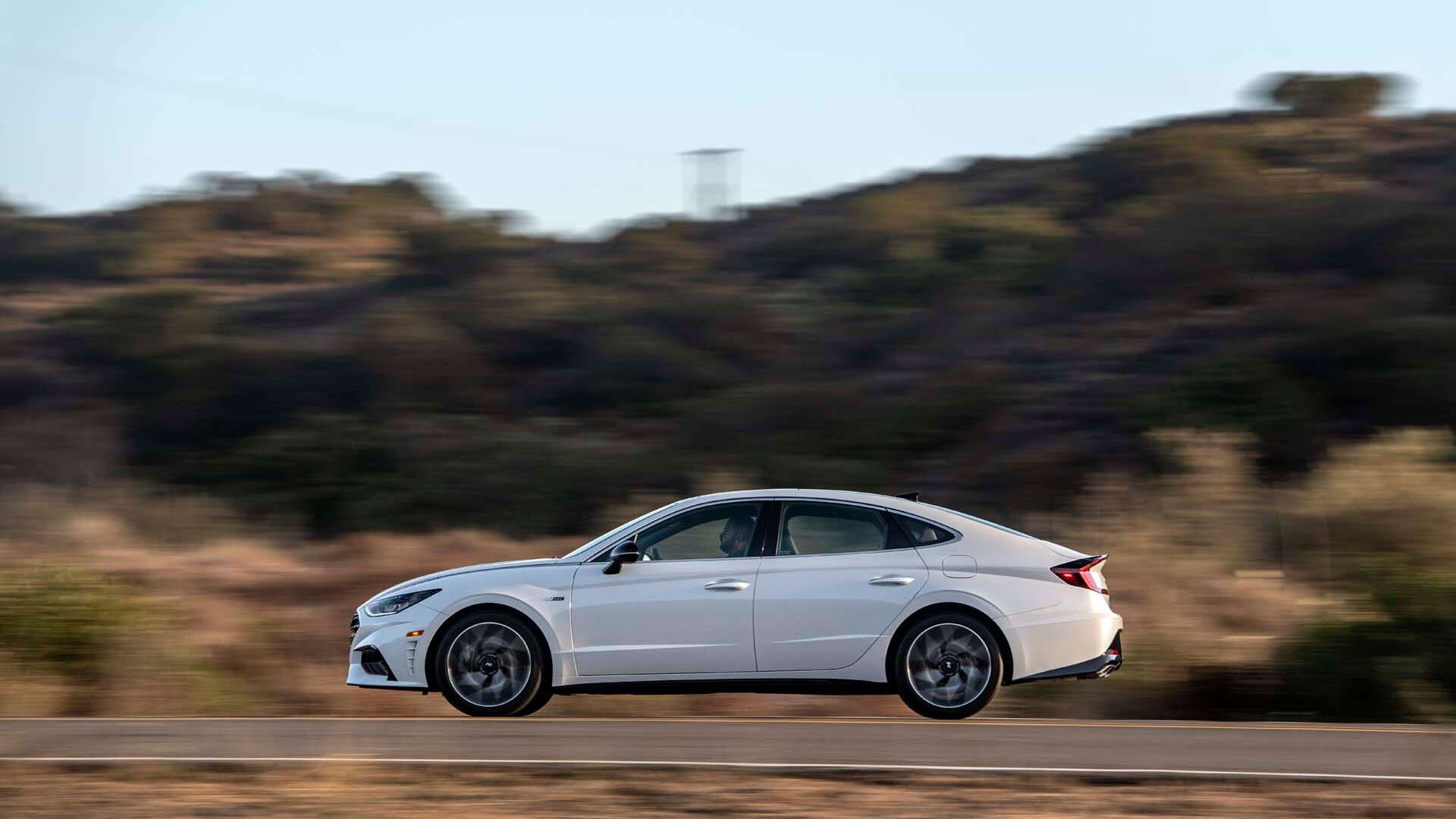 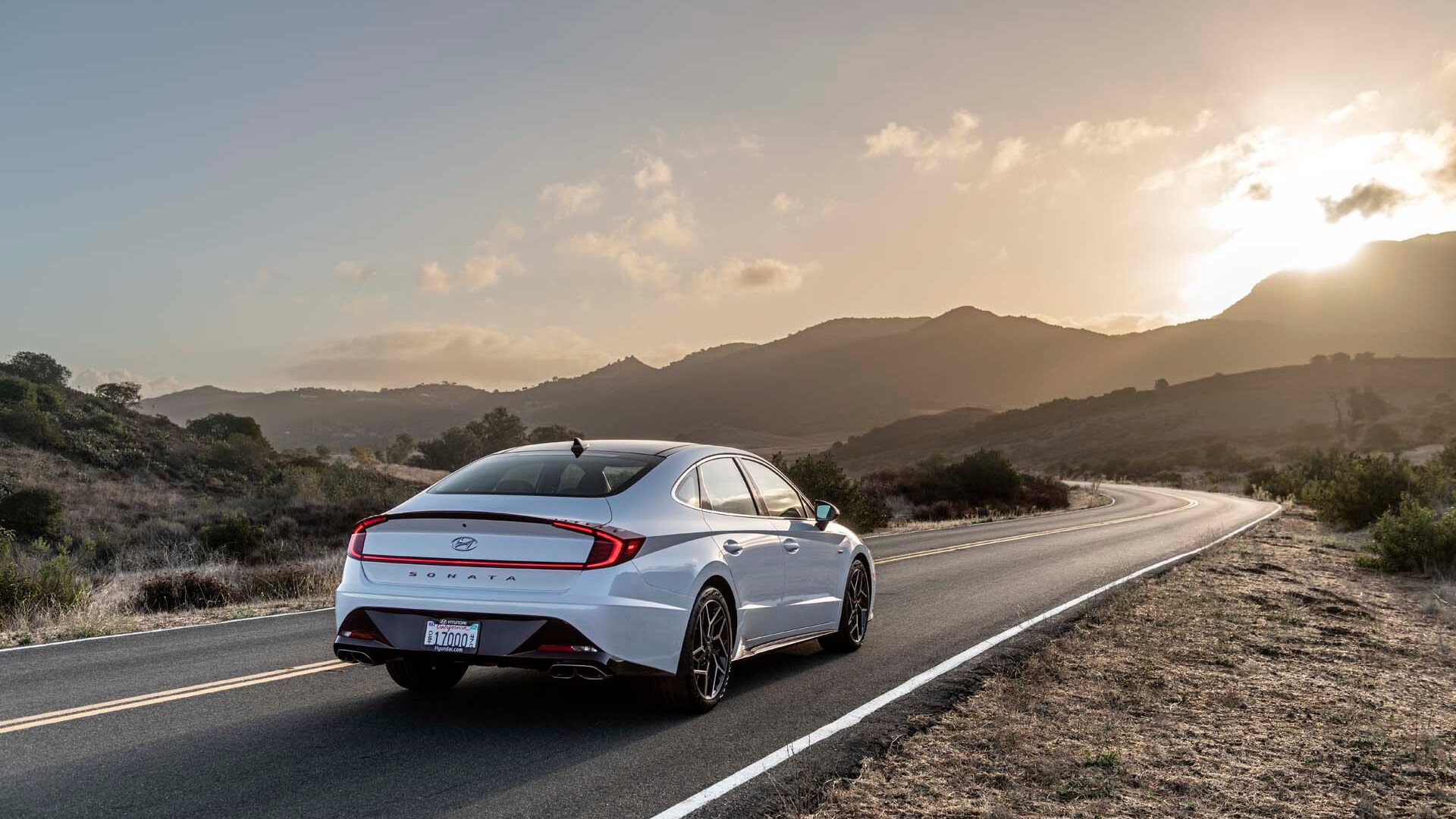 Under the radar styling

The Sonata N Line will be hard to pick out from a regular Sonata at a distance. Its styling cues are subtle and easy to miss at a glance. It boasts larger 19-inch wheels set atop larger brakes for added stopping power, quad exhaust tips, slightly tweaked front and rear fascias, a lip spoiler, and small N badges located on the front fenders and grille. It’ll be easier to hear the Sonata N Line coming with its beefed up exhaust note than to pick it out of a lineup.

Inside, the requisite badges and red stitching signal that “this car means business.” The most welcome interior addition are the front N sport seats, with nappa leather bolsters and suede inserts. Though the bolsters are aggressive, the seats remain extremely comfortable without the pinched feeling you can get from similar sport seats. When I first sat in the Sonata N Line, the seats provided the first clue that I had underestimated the car.

The second clue came when I turned the car on and was greeted with a burble that I had not anticipated. The Sonata N Line’s powertrain combines elements found across Hyundai’s portfolio. It poaches its engine from Genesis and its transmission from the Veloster N.

The 2.5-liter turbo-4 produces 290-horsepower and 311 pound-feet of torque. That’s slightly less than the 300 hp the engine makes in the Genesis G80 and GV80, but I didn’t miss those extra horses in the slightest. The transmission is an N 8-speed dual-wet-clutch automatic that was developed by the performance division with a tuning focus on fun rather than efficiency. This is very similar to the transmission found in the 2021 Veloster N, but it has different gearing and final drive ratios in the Sonata N Line.

This combination works incredibly well together. The engine revs eagerly and has a wide torque band that always seems tp provide power. This immediacy is matched by the transmission, in the Sonata N Line’s most aggressive Sport+ drive mode, shifts fire with impressive speed, and it’s happy to hold on to a gear nearly up to redline.

As a result, the Sonata N Line is seriously quick. Hyundai didn’t release an official 0-60 mph time, but the G80 with this engine makes that run in about six seconds and that car weighs about 400 pounds more than the Sonata N Line. I’d wager that the Sonata N Line beats that time with relative ease. It was genuinely shocking how fast the car felt.

Sport+ doesn’t just make the transmission more aggressive, it also dials back the stability control. This can mean different things in different vehicles. In some vehicles, stability control shuts off completely, while in others it gives you a little room to play around while still being prepared to intervene. I presumed the Sonata N Line would tread the conservative side, but I was wrong. In Sport+ mode, you can spin the tires on launch (that’s why it has launch control) and if you get into the gas hard coming out of a turn, you can spin the tires in second and third gears as well.

The only option available on the Sonata N Line is a set of summer tires for an extra $200, a box that I’m glad was checked on my test vehicle because they  power down cleanly and it also helps with the car’s handling which was another pleasant surprise.

The powertrain is the unquestioned highlight of driving this car for me, but that doesn’t mean it’s a slouch in the handling department. Suspension upgrades over the standard Sonata are significant. The N Line has stiffer chassis bushings, engine mounts, and transmission mounts; specially tuned dampeners; and thicker stability bars. The car also features upgraded brakes and a rack-mounted MDPS, which allows for quicker steering responsiveness and better feel than the column-mounted MDPS found in the regular Sonata.

With the summer tires, the Sonata has a surprising amount of grip and much like the Elantra N Line toes the line between comfort and responsiveness quite well. There’s some noticeable body roll during quicker steering movements, but it feels progressive and linear rather than a sudden shift that would unbalance the car.

It also has a bit of torque steer but not as much as I expected. The Sonata N Line doesn’t have a limited-slip differential and I was worried that the engine’s power would be hard to control when exiting turns, which can be a problem in  front-wheel-drive  cars. If you get on the throttle  early, the front end wiggles a bit, but if you can be patient and apply throttle just after the apex the sedan launches out of turns with gusto.

This was a supremely fun car to drive, in part due to its competency but mostly due to its responsive power delivery and the fact that you would not expect any of these delights from a Sonata of all cars.

Not many vehicles compete directly with the Sonata N Line on power and price. The two most notable examples are the Nissan Maxima and Toyota Camry TRD. But it’s hard to call them competitors because the Sonata N Line drives absolute circles around both of them.

The Maxima features a V-6 teamed with a continuously variable transmission.  Drawing power out of that combination can be frustrating, which is he polar opposite of the Hyundai’s responsiveness.  Even though the Maxima makes 5 more horsepower,  it’s not nearly as accessible to the driver.

The Camry has a V-6 paired with an 8-speed automatic duo that comes closer to the Hyundai’s turbo-4 and 8-speed dual-clutch transmission. However, it’s still not nearly as responsive thanks to a V-6 without as wide of a power band. I would also give the Sonata N Line a handling advantage over both of these vehicles, with the Camry coming close but the Maxima again taking up the rear.

The Sonata N Line really stands alone in a weird space. I doubt many mid-size sedan buyers go into the transaction wanting to maximize performance in this form factor. But for those who go searching for that narrow overlap, the Sonata N-Lines now provides a place to call home.

Pricing for the Sonata N Line starts from $34,195, representing a $5,000 increase over the Sonata SEL Plus on which it’s based. That kind of premium would bother me normally, but I had so much unexpected fun behind the wheel that the number didn’t faze me. This is my new favorite mid-size sedan and I fell for it as fast as those front wheels started to smoke.

Hyundai provided a Sonata N Line and lodging for Internet Brands to bring you this firsthand drive report.