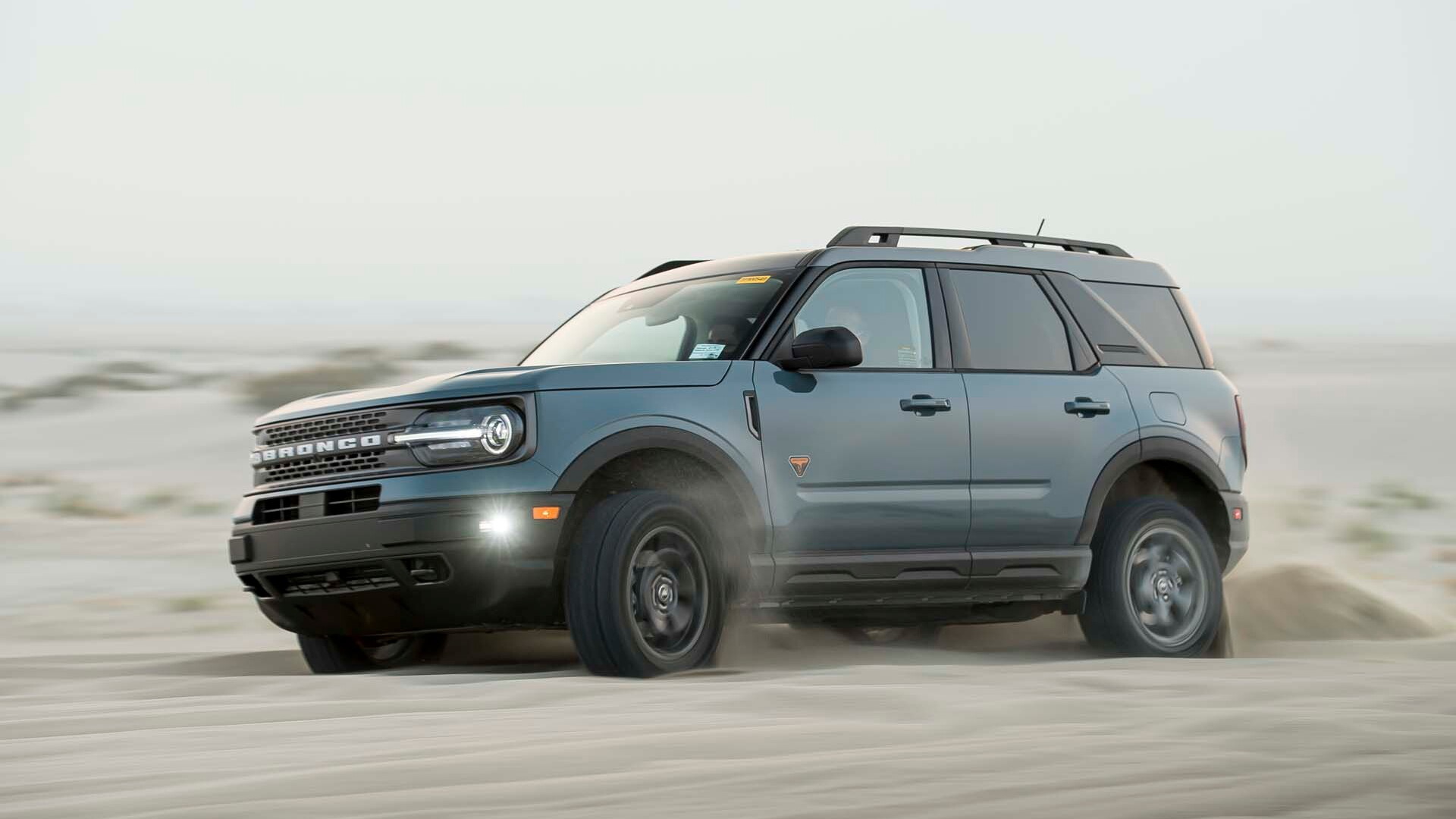 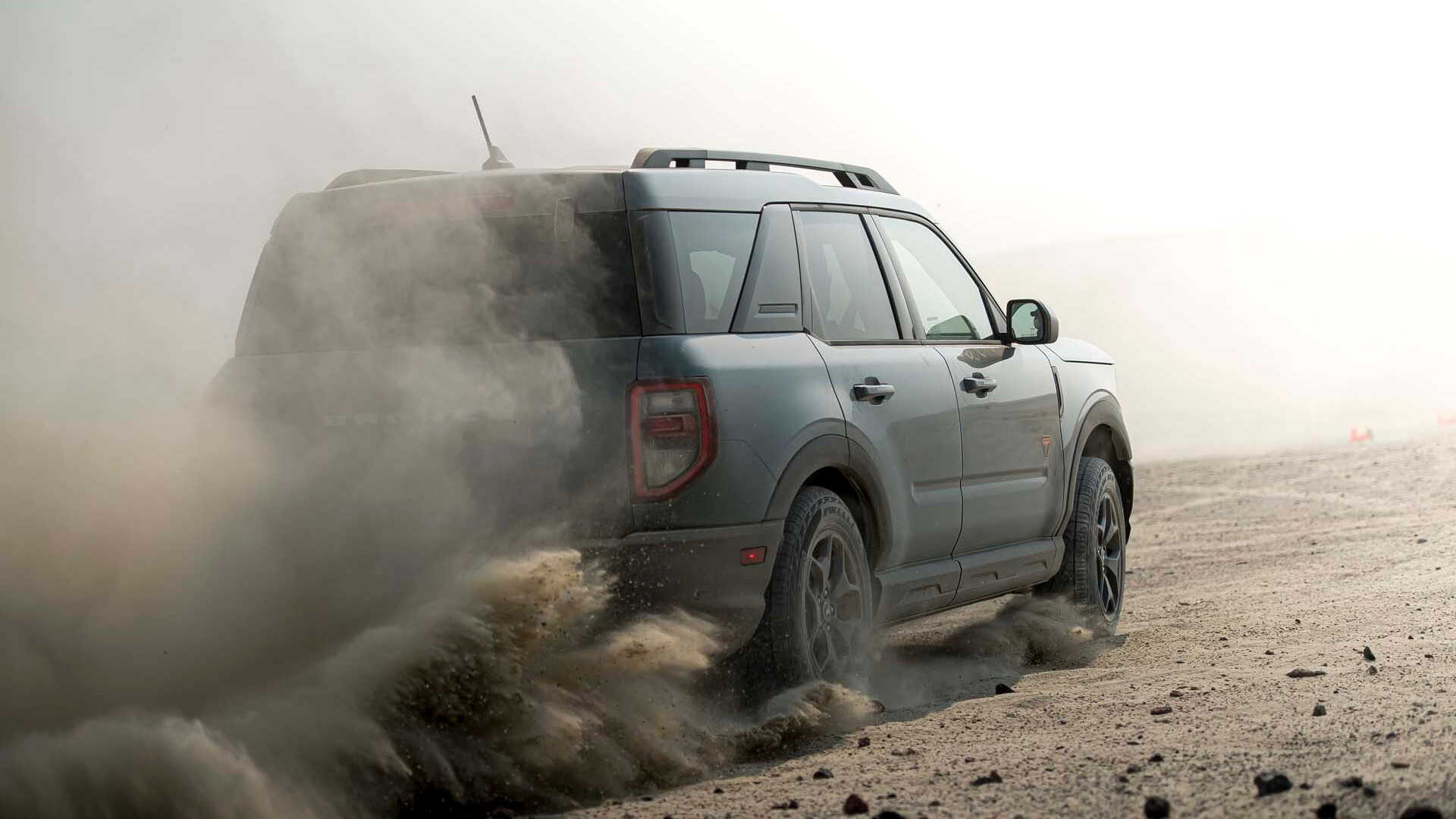 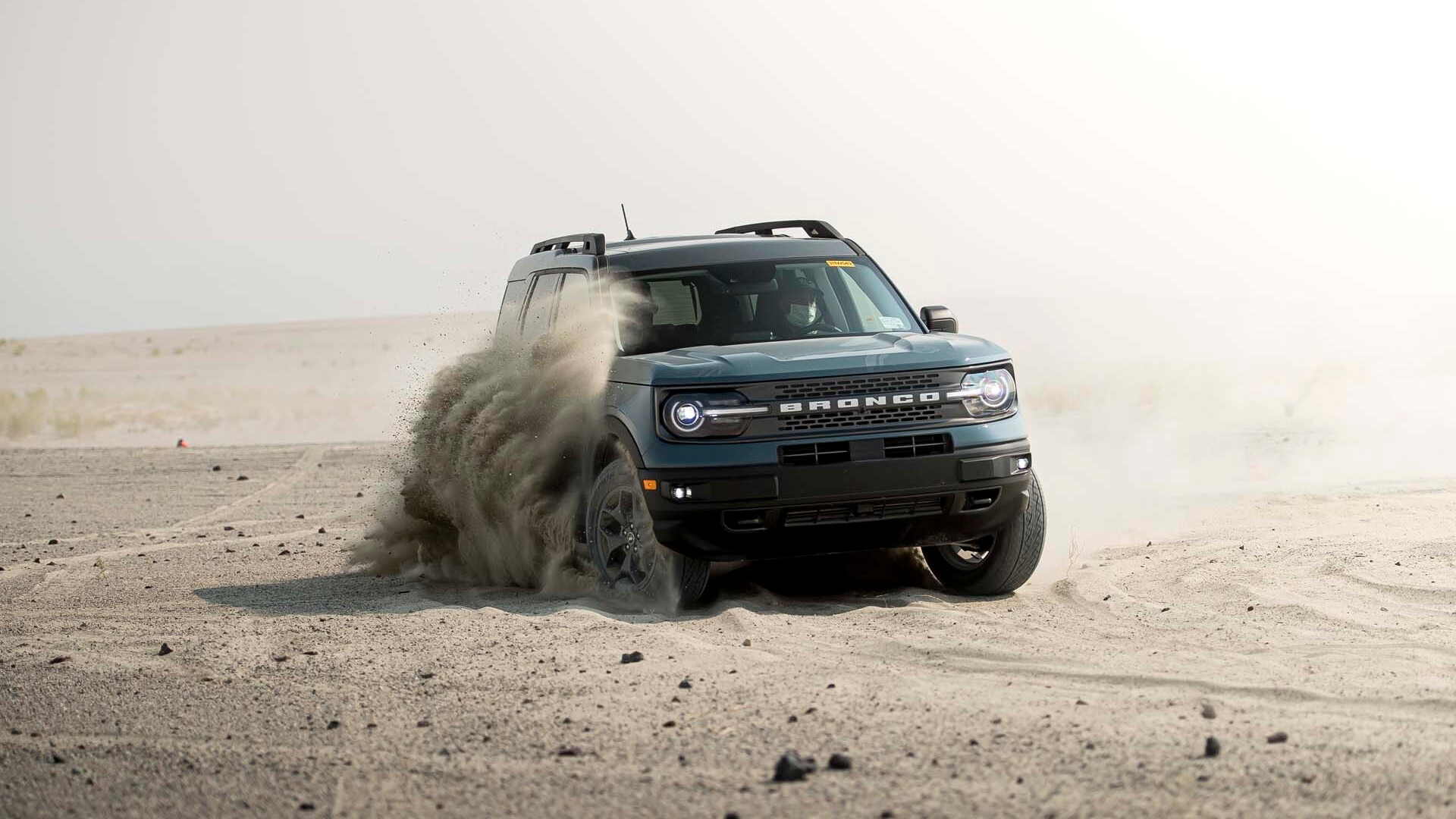 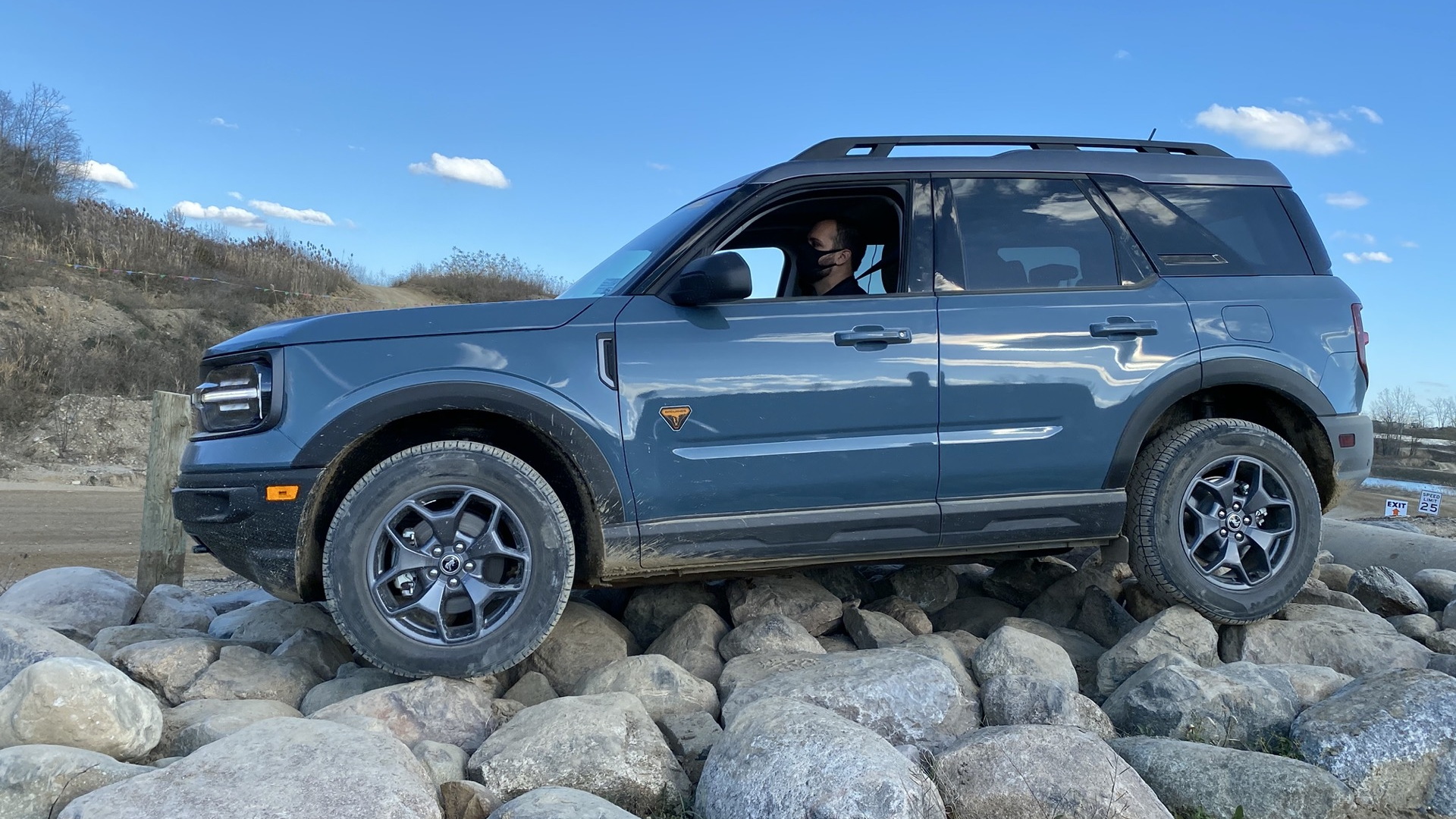 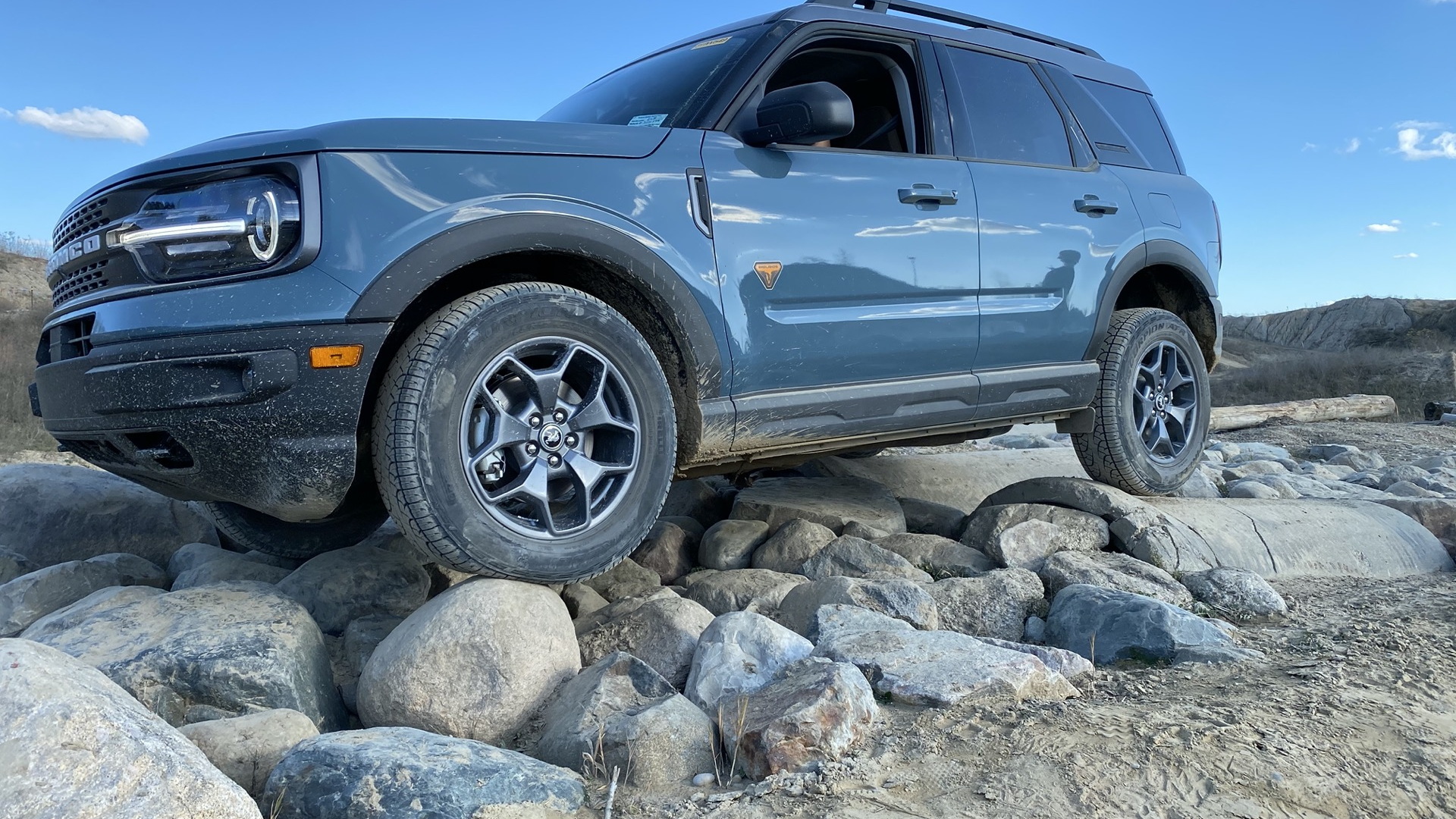 As we wait for the Ford Bronco to arrive next year to see if it can wrestle the off-road heavyweight championship belt from the Jeep Wrangler, Ford’s other new offering provides a suitable undercard to that bout and proves that it can throw some punches of its own. The 2021 Bronco Sport might ride on a modified unibody platform that it shares with the notably road-friendly Ford Escape, but is it a true off-roader?

The Bronco Sport certainly looks the part of an off-road SUV with its resemblance to the bigger, body-on-frame Bronco. The congruency between the styling of the two vehicles feels intentional and it’s easy to mistake the Bronco Sport for the Bronco at a distance, especially from the front. If the goal was to make the Bronco Sport at least look like a real SUV, mission accomplished.

I spent an afternoon testing out two Bronco Sports for a short time on-road and a longer run through Hungry Valley OHV Park outside of Los Angeles to find out if the baby Bronco lives up to its styling and its name. Short answer? Yes, if properly equipped.

The Bronco Sport has two engines tied to trim levels. The Base, Big Bend, and the Outer Banks that I tested first come with the smaller turbocharged 1.5-liter 3-cylinder. I spent the second half of the drive in the First Edition, which, along with the Badlands, comes with the larger turbocharged 2.0-liter 4-cylinder.

The turbo-3 makes good power for such a small engine, 181-horsepower and 190 pound-feet of torque. It’s overshadowed by the turbo-4’s 250 hp and 277 lb-ft of torque, but on the street, both engines offer enough power for day-to-day driving. That came as a surprise for the smaller engine, which feels almost peppy. The bigger engine is downright quick.

Off-road, however, the differences between the two engines are exposed. The turbo-3 has only a hair-trigger’s difference between a little power, then suddenly all the power. It’s difficult to drive smoothly off-road, where controlling the power can be crucial, especially in low speed, tight-fit situations.

Conversely, the turbo-4- offers much more tractable power. It was easy to find just the right amount of throttle, and it never bogged down on a higher speed run through a sandy riverbed. The turbo-4 comes with a trail control system that functions like off-road cruise control and can be set for speeds between 1 and 20 mph going forward or up to 6 mph in reverse.

Beyond what’s under the hood, there’s a sizable gap between the Badlands/First Edition and the rest of the lineup. These models have a more advanced four-wheel-drive system with a twin-clutch rear-drive unit that can send torque fully to one rear wheel and act as a rear locker. Ford also adds two more off-road drive modes (Mud/Ruts and Rock Crawl), a more robust suspension with upgraded front struts and 46-mm monotube rear shocks, and unique knuckles, lower control arms, springs, dampers, and sway bars. They also get an extra inch of ground clearance, up to 8.8 inches with the larger 29.5-inch tires, and much better approach, breakover, and departure angles (30.4/20.4/33.1 degrees vs. 21.7/18.2/30.4 degrees in the Outer Banks).

A lot of it comes down to a difference in tires. The Outer Banks came with Michelin Primacy all-seasons, the same ones you’ll find on street cars like the Acura TLX I tested recently. The First Edition was shod with 29-inch Falken Wildpeak all-terrains. The all-seasons struggled for purchase on the rock face descent, and the Outer Banks slid scarily down the hill at times, even with the brakes fully applied and the wheels locked up. An interesting test would be to put a good set of all-terrains on the Outer Banks and re-run this hill, but Ford doesn’t offer that as an option on any of the Bronco Sport’s three lower trim levels.

Other First Edition equipment also proved useful off-road. The paddle shifters gave me control over the gears on descents (not available with the smaller engine) and the trail control system also worked flawlessly and less noisily than similar systems I’ve tested. The front-mounted 180-degree camera (with washer) made it easier to see over the hood, and that camera is fantastic for spotting and avoiding obstacles while crawling.

The differences came down to comfort levels. If you plan on doing any kind of trail running, overlanding, or off-road driving with regularity, then upgrading to the larger engine, knobbier tires, and useful off-road systems and equipment is a must. The fact that the Outer Banks I tested was close in price to a Badlands makes the choice that much easier.

For as ruggedly handsome as the exterior is, the Bronco Sport’s interior lacks excitement. The Outer Banks carries the most upscale interior with nicely appointed seats that can be upholstered with a few different types of leather (this interior is also found in the First Edition). Otherwise, the dashboard and touchpoints around the cabin are saddled with a lot of plastics. It feels very much like a standard, non-luxury interior. An 8.0-inch touchscreen is standard and a nicely sized storage cubby underneath it is a good place to store a phone and other small items.

The Bronco Sport’s vertically oriented styling gives the driver good visibility on-road and passengers enjoy plenty of head room and excellent sight lines. At 36.9 inches, backseat leg room is on the smaller side, and it trails subcompact SUVs like the Kia Seltos (38.0 inches) and Chevrolet Trailblazer (39.4 inches). But that expansive head room makes the Bronco Sport’s interior feel larger than it actually is.

The cargo area is thoughtfully designed, and the Badlands/First Edition add a 110-volt household outlet back there in addition to the standard 12-volt outlet. Instead of carpet, the floor and the backs of the rear seats are rubberized with mats that can be removed to be hosed down, a feature you don’t often see.

I found the front seats slightly uncomfortable, an issue I’ve noticed in multiple Ford vehicles of late. In this case, the driver’s seat bottom was too short to provide enough thigh support for a long afternoon of driving.

The only other unibody vehicle this size with similar off-road ability is the Jeep Compass Trailhawk, which enjoyed an unchallenged hegemony similar to the Wrangler's until now.

Buyers can jump up to the bigger Jeep Cherokee Trailhawk and its 271-hp V-6, which bests the Bronco Sport’s 250 hp by a decent margin, though its 239 lb-ft of torque trails the Bronco Sport 277 lb-ft by an even larger margin. The Jeep is also more expensive, pushing $40,000 once you option it up to match the Bronco Sport’s safety and technology features.

The Bronco Sport and Compass Trailhawk have similar off-road equipment. Both feature locking 4WD systems with similar low-crawl ratios (18:1 in the Bronco Sport, 20:1 in the Compass), upgraded suspensions, and even the same all-terrain tires. The Bronco Sport’s front camera is a nice feature that the Compass would do well to add. The biggest difference is power, which likely gives the Bronco Sport the edge for higher speed off-roading, where its engine will be better to able to maintain wheel spin through sand, snow, and mud than the Compass’ naturally aspirated 4-cylinder.

Unfortunately, the 2,000 Bronco Sport First Editions are already sold out. The First Edition combines the nicer interior found in the Outer Banks with the off-road upgrades and larger engine of the Badlands. That makes it the ideal Bronco Sport, though with a large $40,050 price tag.

I recommend the Badlands over the Outer Banks. The Badlands does cost a bit more at $37,545 if you tack on the Badlands package ($2,595), which adds leather upholstery, an upgraded stereo, and wireless charging pad among other options. But that’s only $1,500 more than the Outer Banks I drove, which added an options package of its own to bring it up to par with the Badlands’ technology and stickered at $36,045. For the big jump up in off-road equipment and the better engine, that’s a worthy jump to make. Fuel economy ratings do favor the Outer Banks, which is EPA estimated at 25 mpg city, 28 highway, 26 combined versus the 21/26/23 mpg of the Badlands.

The Bronco Sport finally gives Jeep a worthy challenger, at least on the smaller, unibody side of off-roading. The Bronco Sport represents the edge of the envelope for what can be accomplished with a unibody platform, and that will be more than enough for everyone but the hardest core of off-road adventurers.

Ford provided two test vehicles, an afternoon at an off-road park, and a very nice bowl of warm tri-tip chili to bring you this firsthand report.