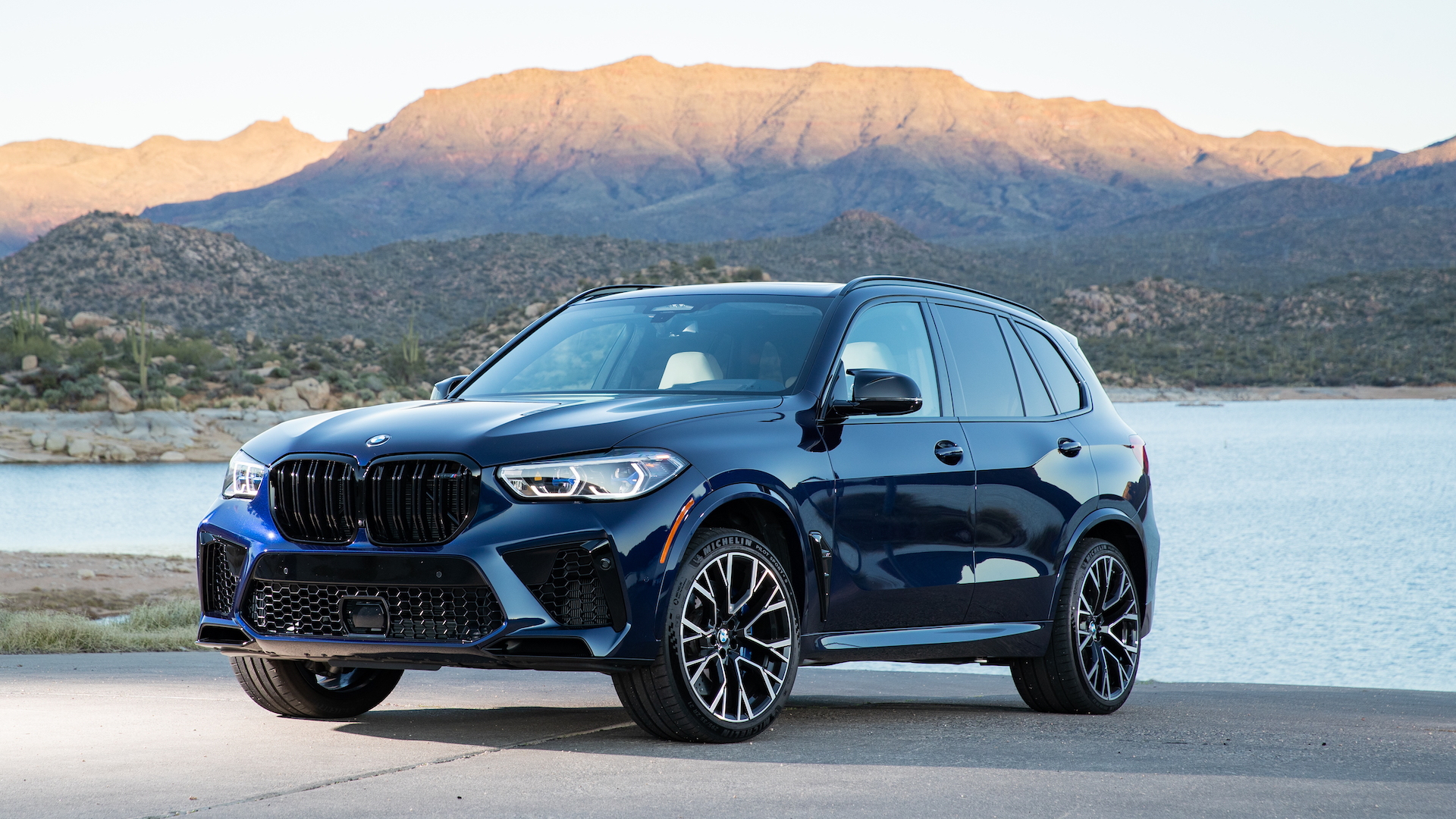 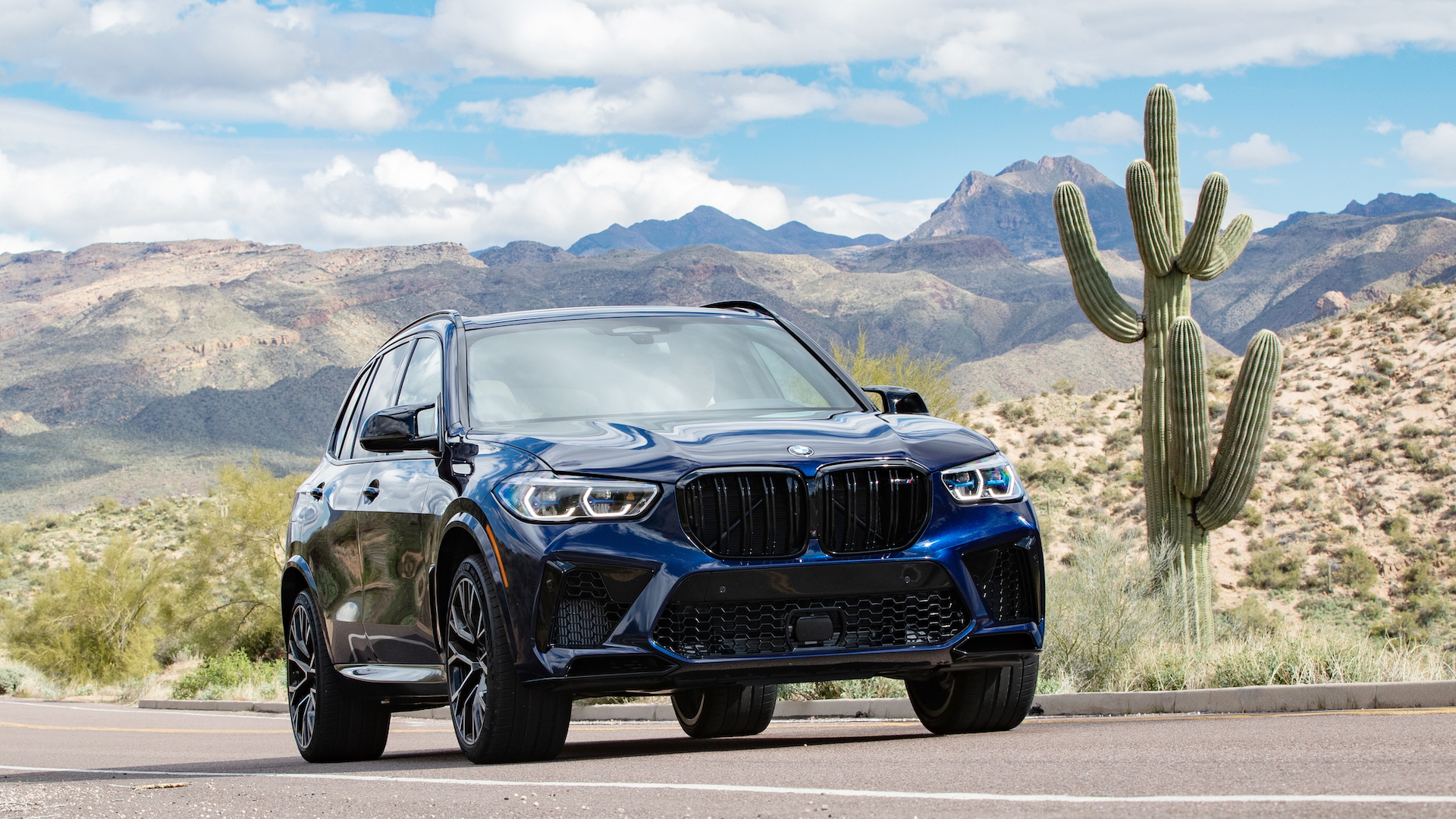 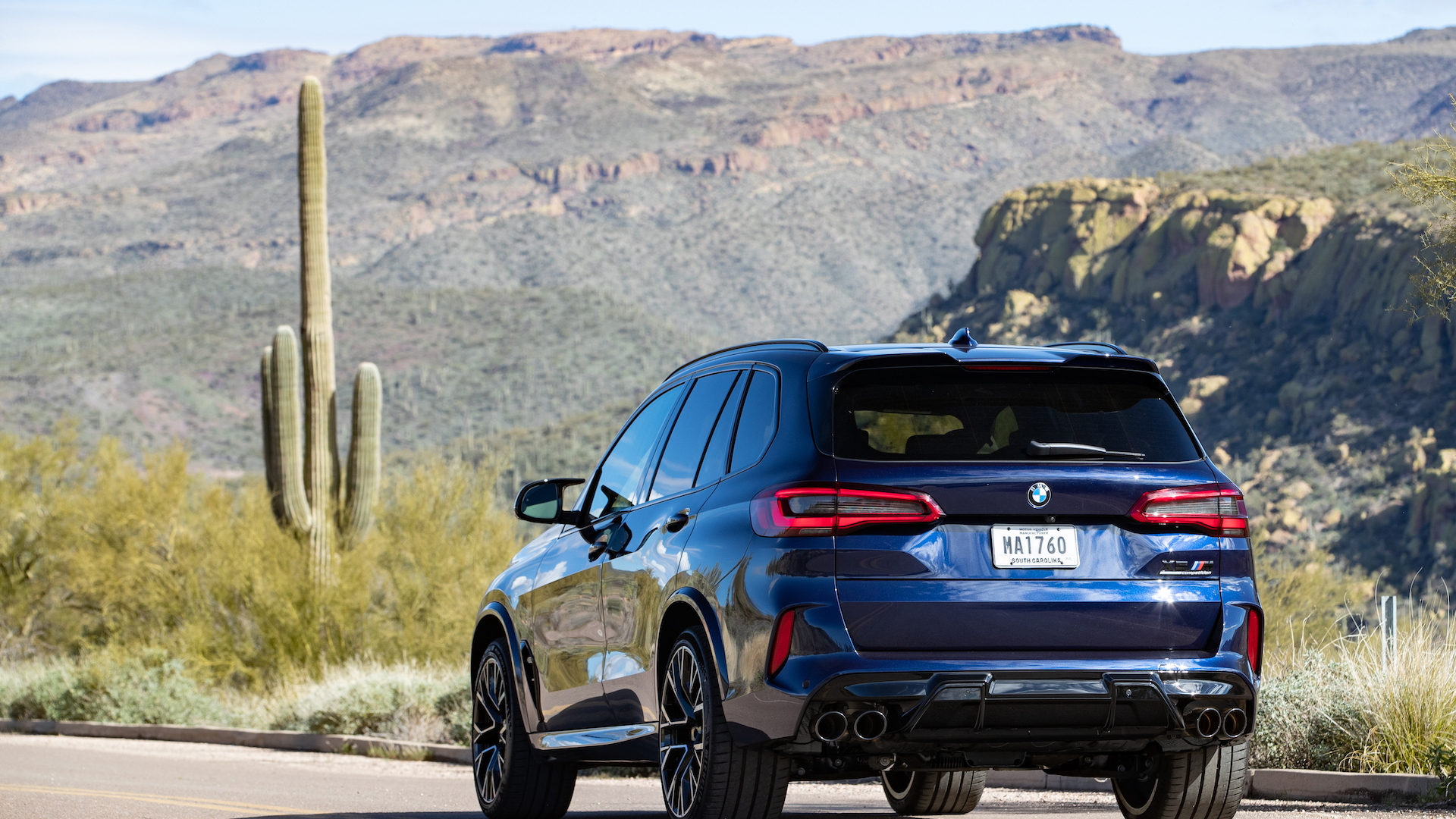 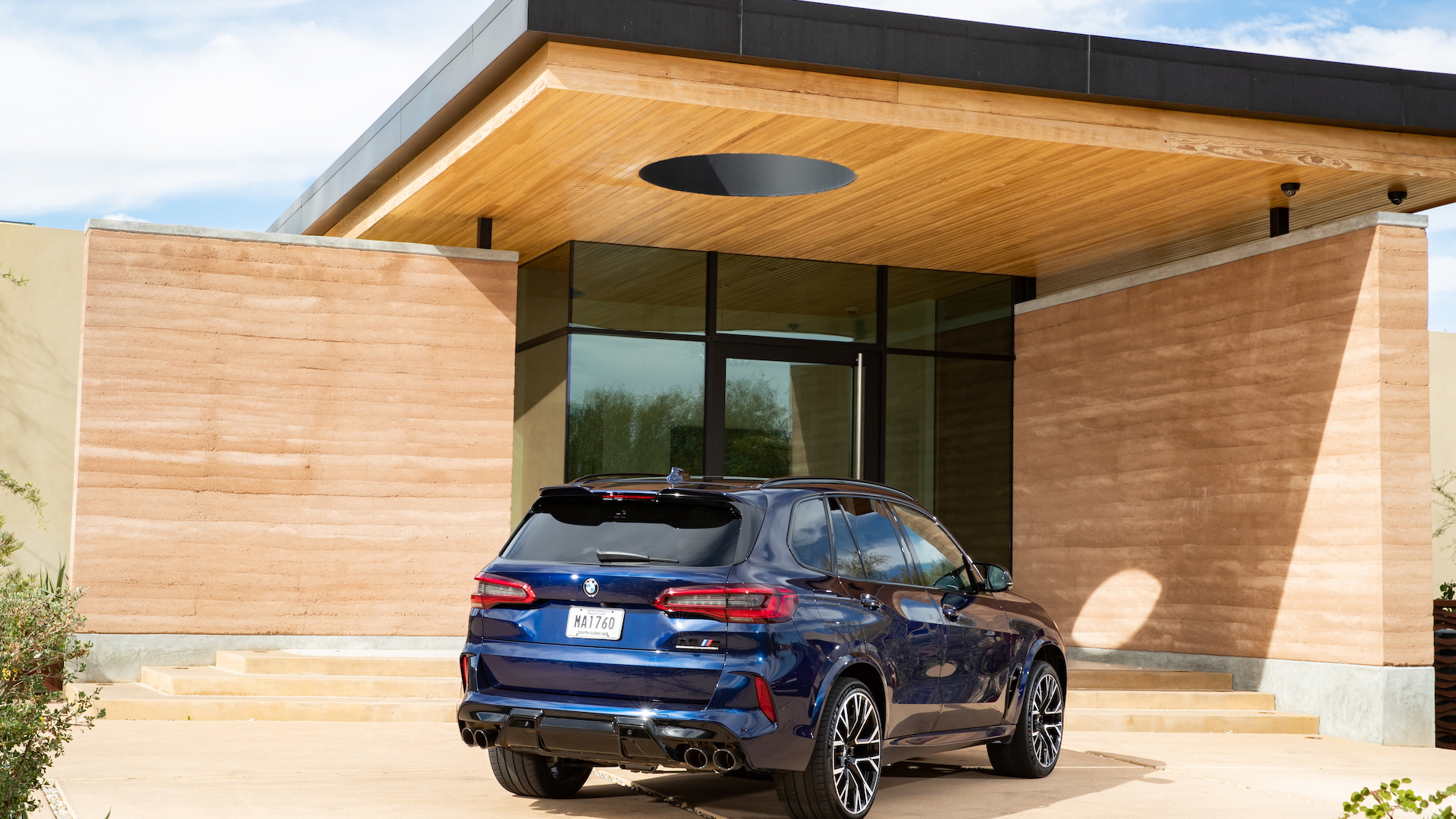 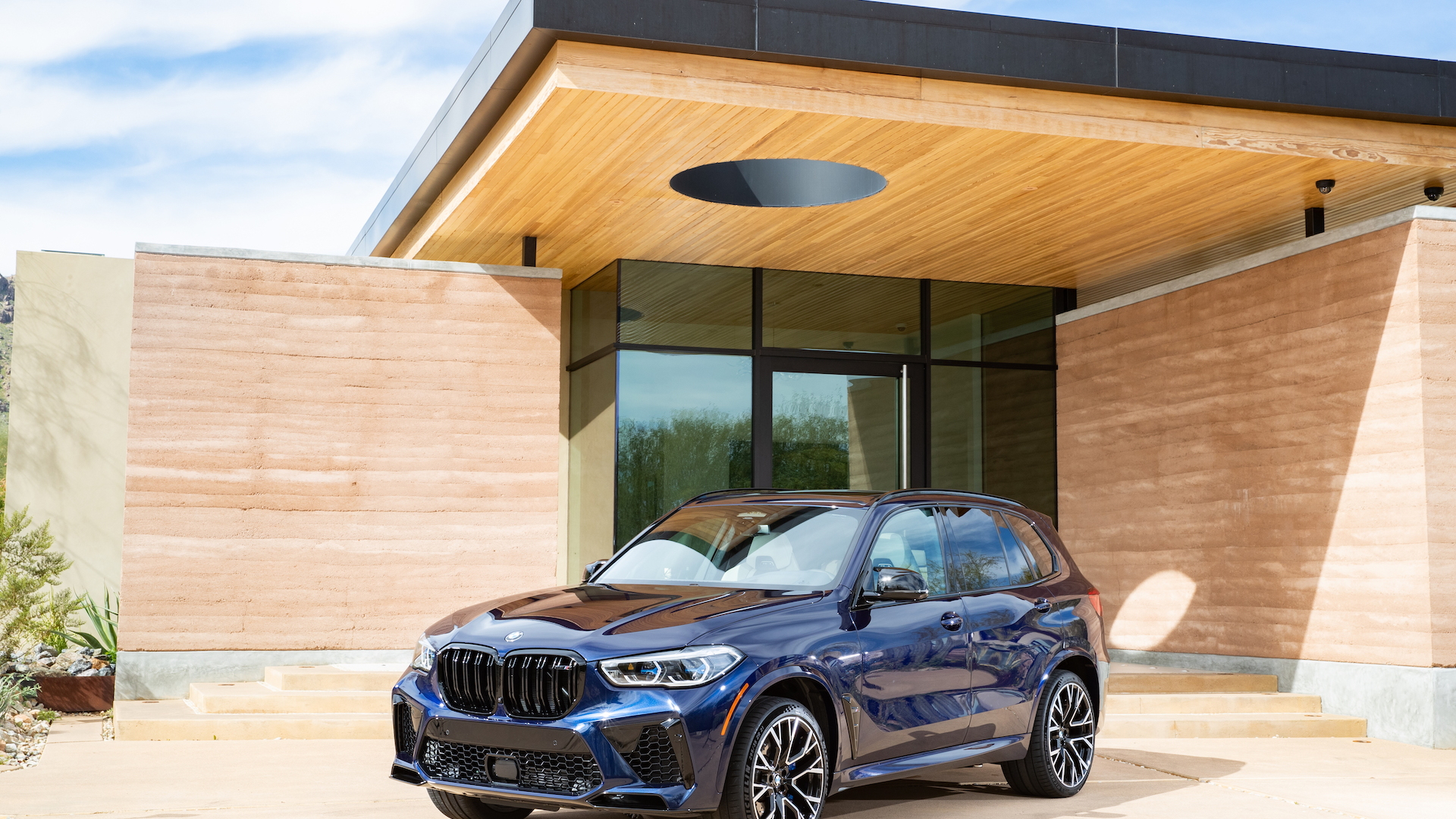 In its quest to shed lingering concerns that it has gotten too soft, BMW may have overcompensated with its 2020 X5 M and X6 M. These M-ified versions of BMW’s mid-size SUVs—think X5 for practicality and X6 for a more evocative roofline—have been conceived with track use in mind.

We ventured south and west to Prescott, Arizona, to put them through their paces, not on the track where they were intended to go but on the public roads where they’ll actually be used. M5 wagons they are not, even if they have many of the right ingredients.

Power comes from BMW’s familiar 4.4-liter V-8, which uses a pair of turbochargers to produce 600 horsepower in standard form and 617 hp in Competition guise. An 8-speed automatic gearbox with paddle shifters tucked behind the thick-rimmed steering wheel hurtles power primarily to the rear wheels, which claw into the pavement via a standard active rear differential, though the fronts tires will eagerly dig in as needed.

The V-8 vaults the big SUVs to 60 mph in just 3.8 seconds, BMW says, and it doesn’t give up there. Acceleration is brutal, though the syrupy throttle helps modulate all that power well. An active exhaust system helps the V-8 snarl, but the synthetic rumble that enters the cabin bears the signature of BMW’s sound studios. No matter, the big Bimmers growl with Grizzly bear majesty. 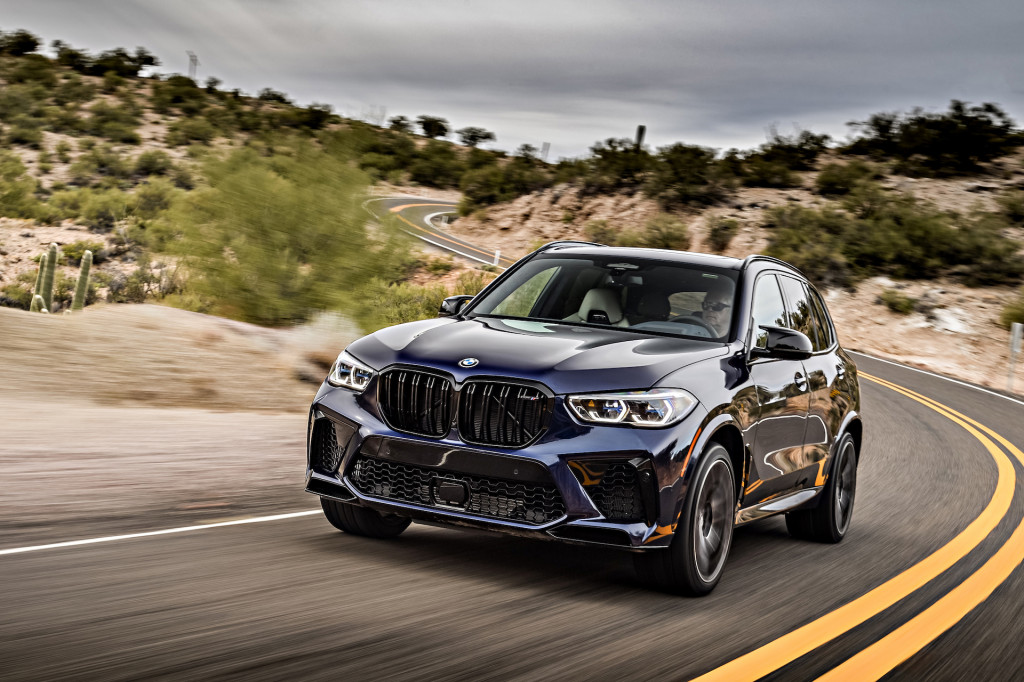 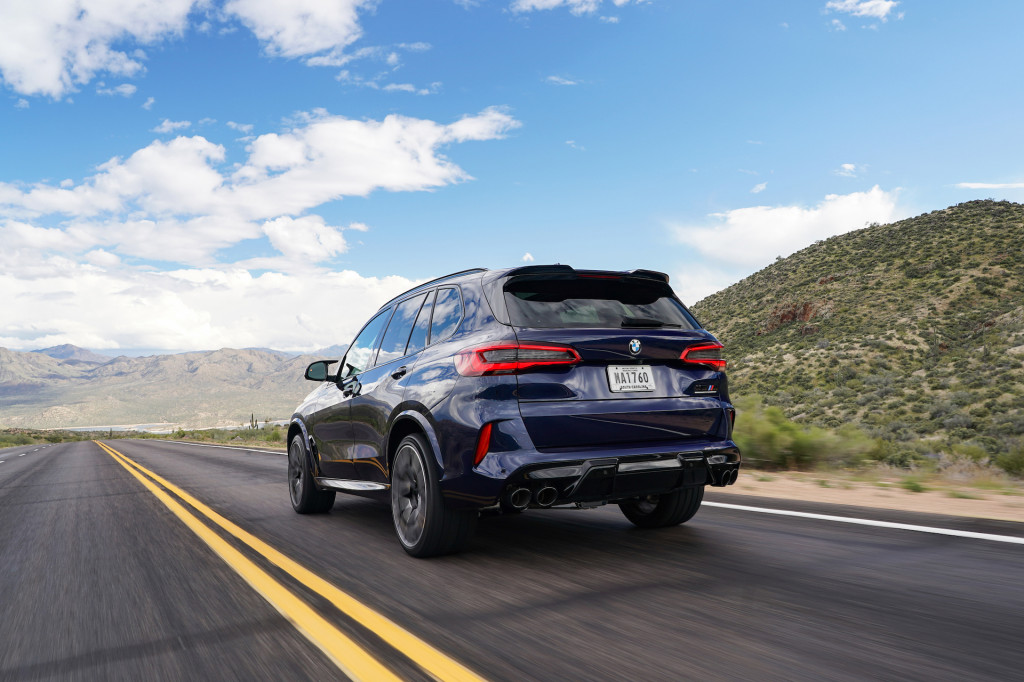 Underneath, M removed the air suspension fitted to the X5 M50i and marked it “return to sender.” Instead, adjustable dampers and coil springs react with limited interest in comfort to tame the pavement below. The ride is stiff and unforgiving, a reminder that the Michelin Pilot Sport 4S tires fitted by the factory offer little in the way of compliance on their own. Pockmarks, potholes, and expansion joints are amplified rather than muted. Even in the softest setting, the big SUVs become tiresome on long highway slogs.

BMW’s decision to go with adaptive dampers is a surprise given arch-rival Mercedes-Benz sticks with an air suspension on its AMG GLE 63 S. To be sure, the X5 M and X6 M SUVs I drove exhibited little body lean thanks to the active roll bars front and rear that push these SUVs flatter during cornering. High seating position aside, the X5 M and X6 M hustle with the poise of stiff, track-oriented sport sedans.

Admittedly, BMW offered only higher-performance Competition versions for the drive rather than the slightly softer standard X5 M and X6 M. It’s possible that the standard versions’ suspension compliance makes them better cruisers, though I’m skeptical. The novelty of tracking an SUV passed about a decade ago when the first M-tweaked X5 M arrived and wowed us, so it’s unfortunate that BMW has tuned its range-topping performance ‘ute for track days and not the real world.

The X6 M weighs about 50 pounds less than the X5 M, though both are positively portly at around 5,000 pounds. The X6 M has an incrementally stiffer body thanks to its reduced window count, and that teams with a lower center of gravity to theoretically improve handling. Rainer Steiger, BMW’s chief in charge of the X5 M and X6 M, told us that it would take a lap around Germany’s Nurburgring-Nordschleifie for him to identify each vehicle in an incredibly dangerous and purely hypothetical blindfolded driving test. Certainly, my sprints along the winding desert roads near Prescott revealed identical roadholding, and I left my blindfold at home. 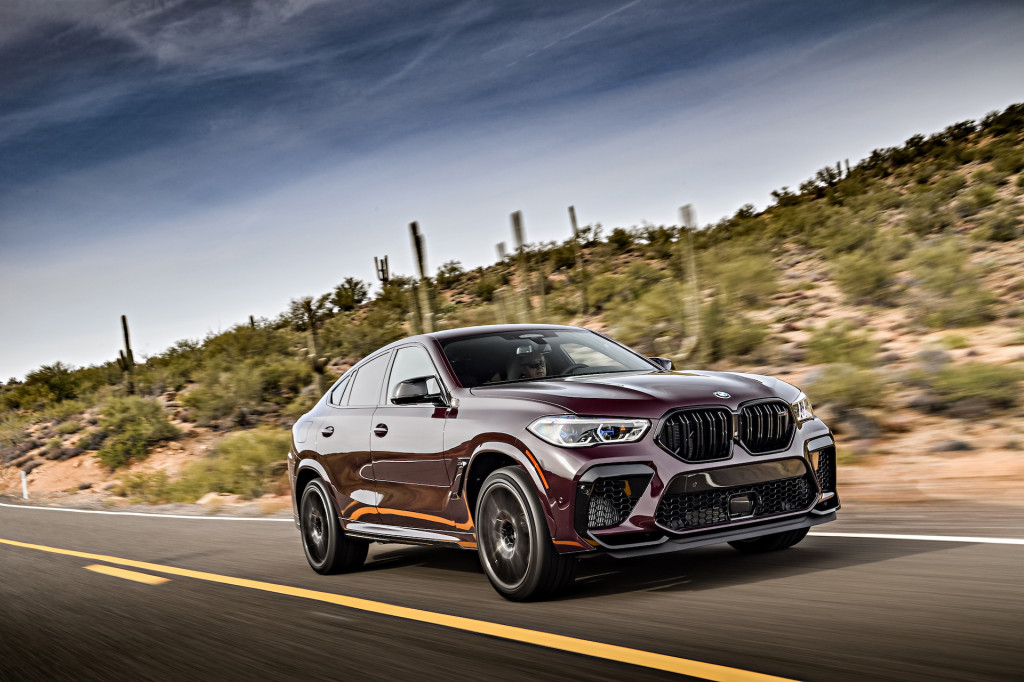 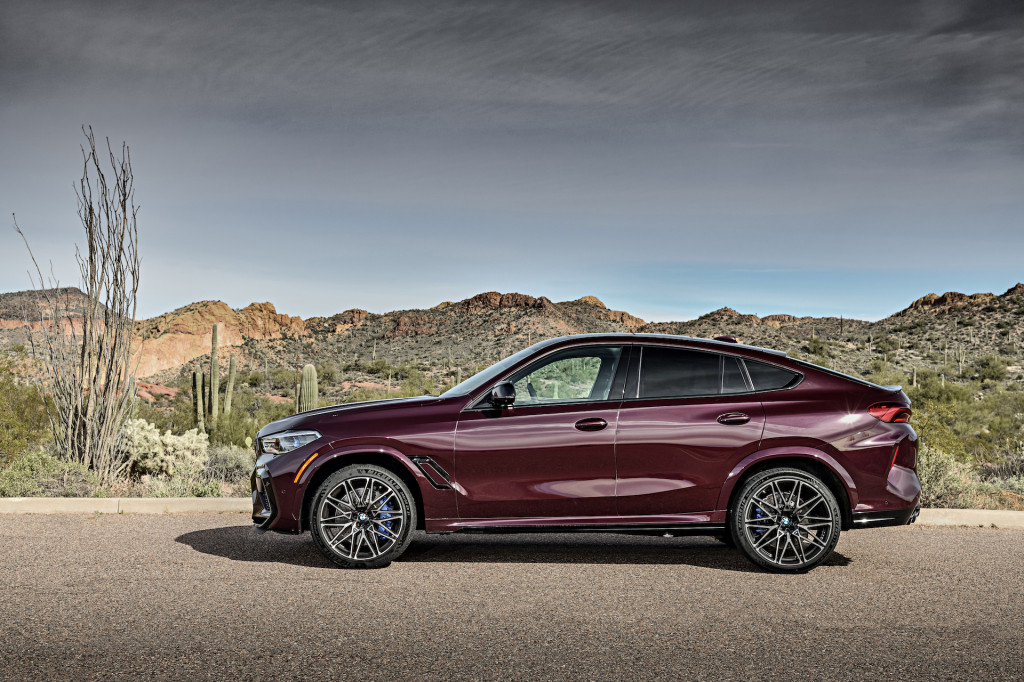 The driving experience in each M SUV is highly customizable thanks to various modes that tweak steering heft, throttle response, shift schedules, ride stiffness, and even brake responsiveness. Even the standard electric power steering mode is heavy enough to be a chore at low speeds. A few loops around a track might reveal the difference between the standard and supposedly snappier sport brake modes, but my repeated tests on public roads told little. The brakes themselves are massive—15.6 inches up front with six-piston calipers and 15.0 inches out back with a single floating caliper—and grabby at low speeds but exceptionally strong when taming curvy road hustle.

Red toggles mounted atop the steering wheel hub activate user-configurable M1 and M2 presets. I bookended the settings by customizing M1 to all-comfort and M2 to everything-sporty. The X5 M and X6 M are at their best somewhere in the middle, with the suspension set to its softest mode, steering tailored to the driver’s preference, and the powertrain tweaked for snappier responses. That Goldilocks-level setting roughly works out to Sport, though the Sport+ mode is nice for occasional spirited driving. The Competition trim includes a special Track mode, yet another reminder that these vehicles are thoroughbreds in search of a closed course and not a daily slog in traffic. 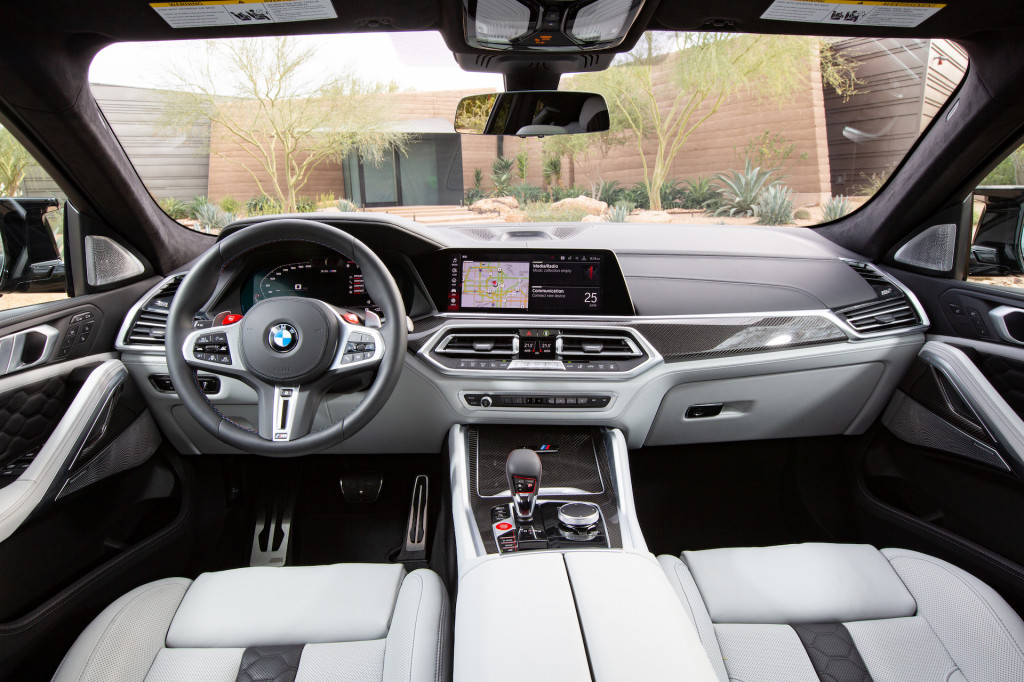 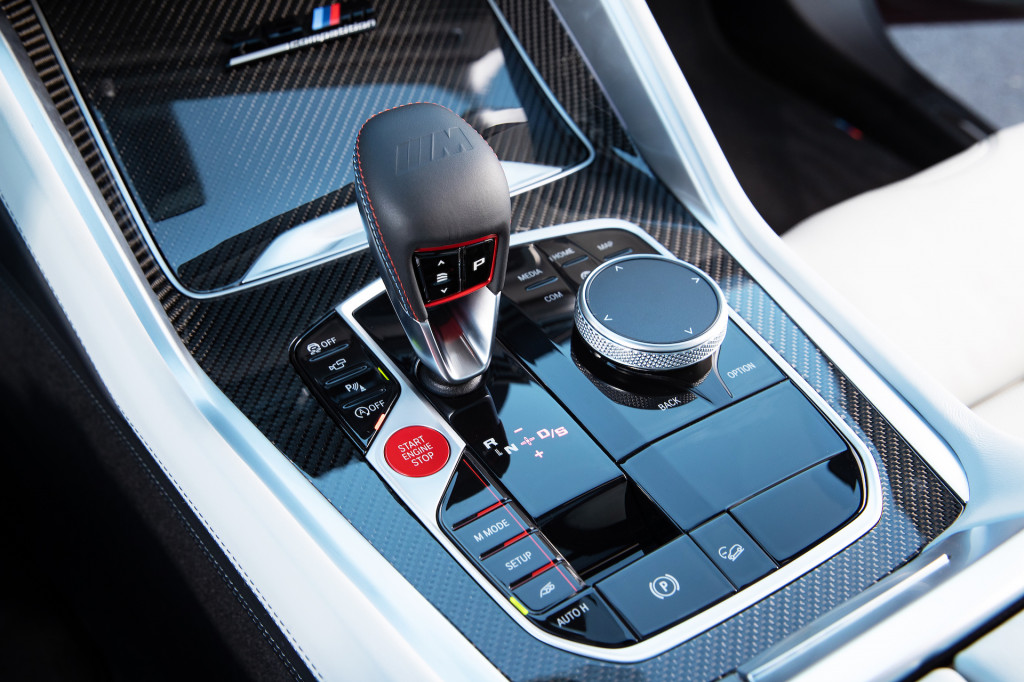 For the most part, the X5 M and X6 M fit the mold the automaker’s sporty division has nearly perfected over the last several decades. Chunkier body work front and rear improves airflow slightly while giving the ‘utes more road presence. Blacked-out versions of the corporate kidney grille for the Competition version—thankfully not enlarged here as in the portlier X7, though an X7 M is imminent—save buyers the hassle of adding aftermarket parts. Staggered width, 21-inch wheels are standard, though base M buyers can opt for the Competition’s 22-inch rear wheels.

Inside, the standard heated sports seats offer plenty of adjustment and can cool or massage butts and backrests for an extra cost. The front thrones have beefy bolsters that may prove confining for linebacker-wide occupants, so try before you buy. Carbon-fiber trim adorns the dashboard, console, and door panels, and a few nice touches like blue/purple/red striping on the seatbelts serve as nice reminders that M doesn’t merely mean performance. Otherwise, the standard X5/X6 interior carries over with its digital instrument cluster, 12.3-inch touchscreen canted slightly toward the driver, and quirky automatic transmission lever. 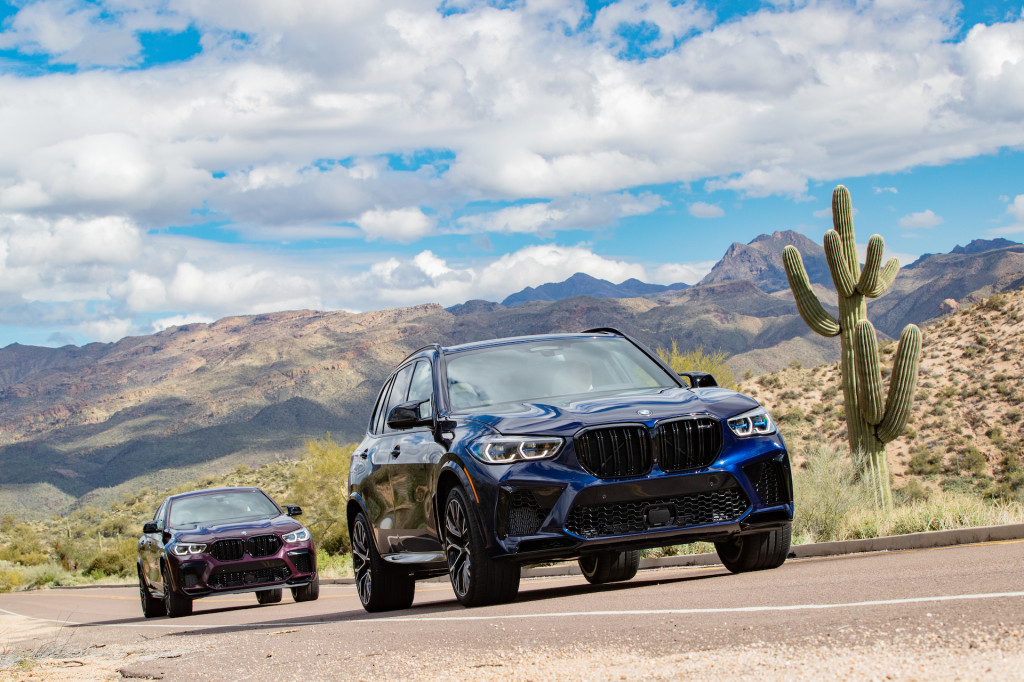 BMW asks about $105,000 for the base X5 M, and around $9,000 more for the Competition it expects will outsell the “base” vehicle about 10 to 1. The X6 comes with fewer windows but manages to cost an additional $3,500. Competition versions include a leather interior, which costs $3,500 on the base models, though “value” isn’t a word I toss around very often with M cars.

With its 2020 X5 M and X6 M, BMW has built a pair of performance crossover SUVs that will beg owners to book a track day to explore their full potential. Wouldn’t those owners be better served by an M5?

BMW provided travel, lodging, and meals to bring you this firsthand account.