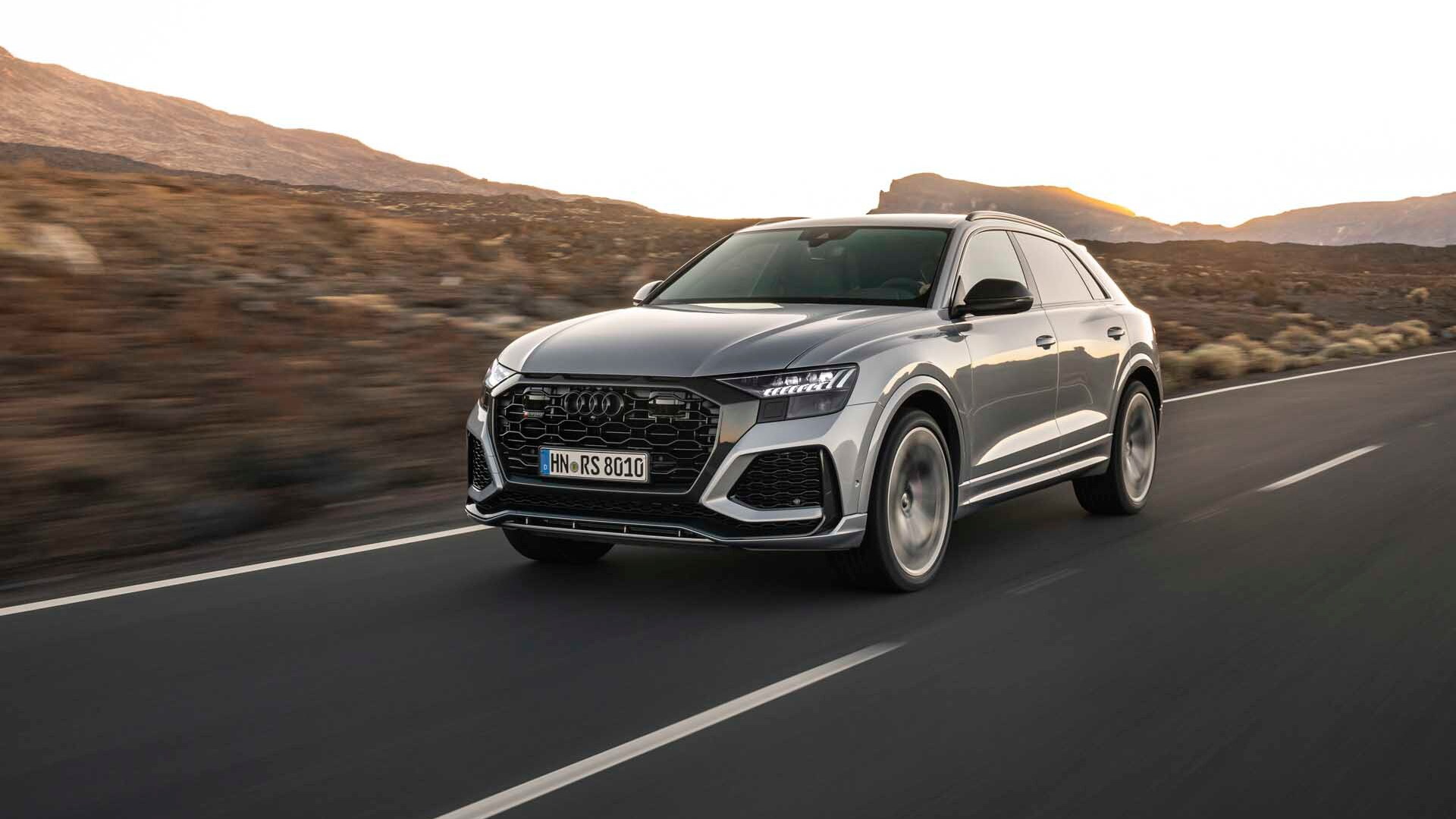 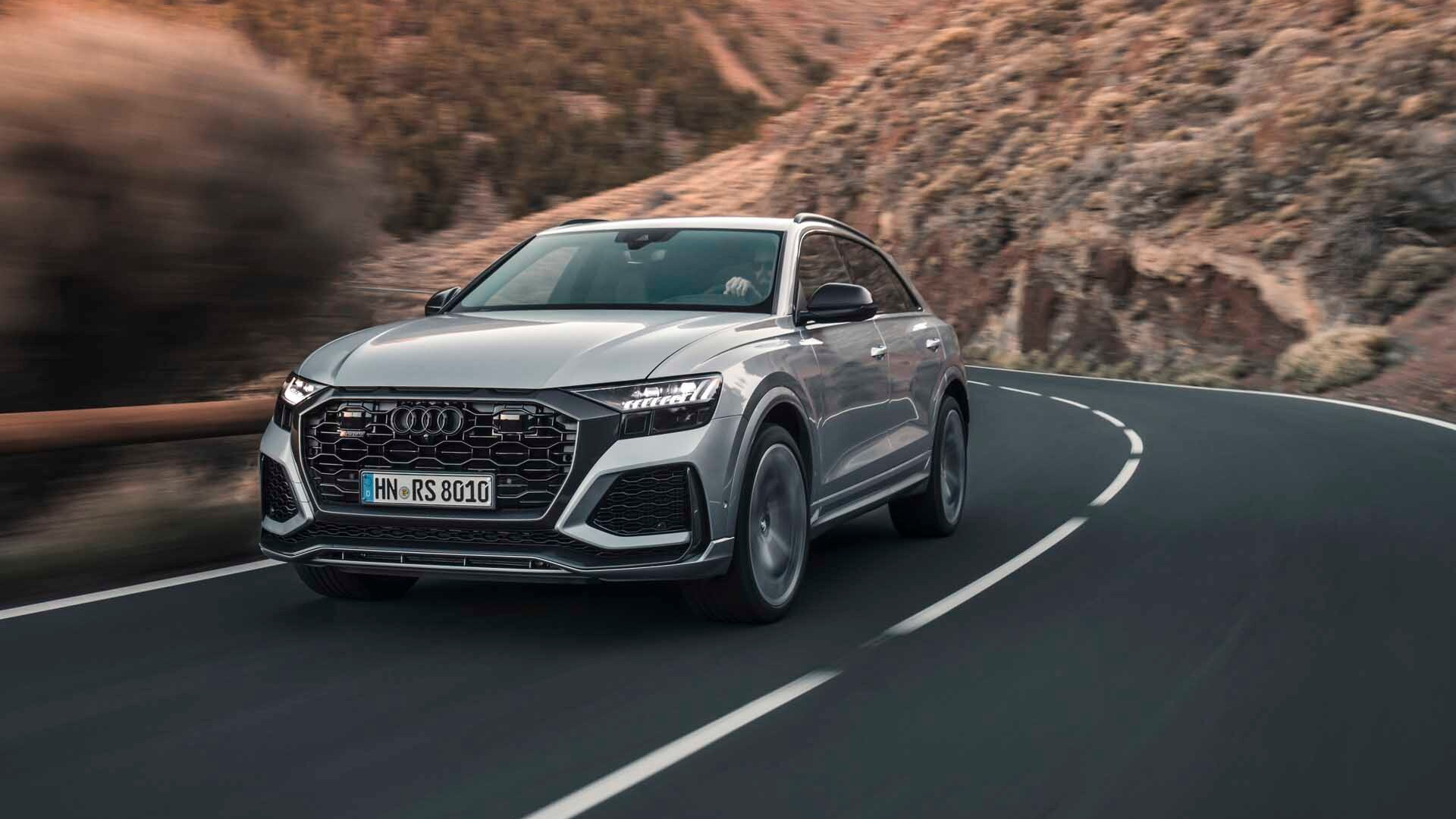 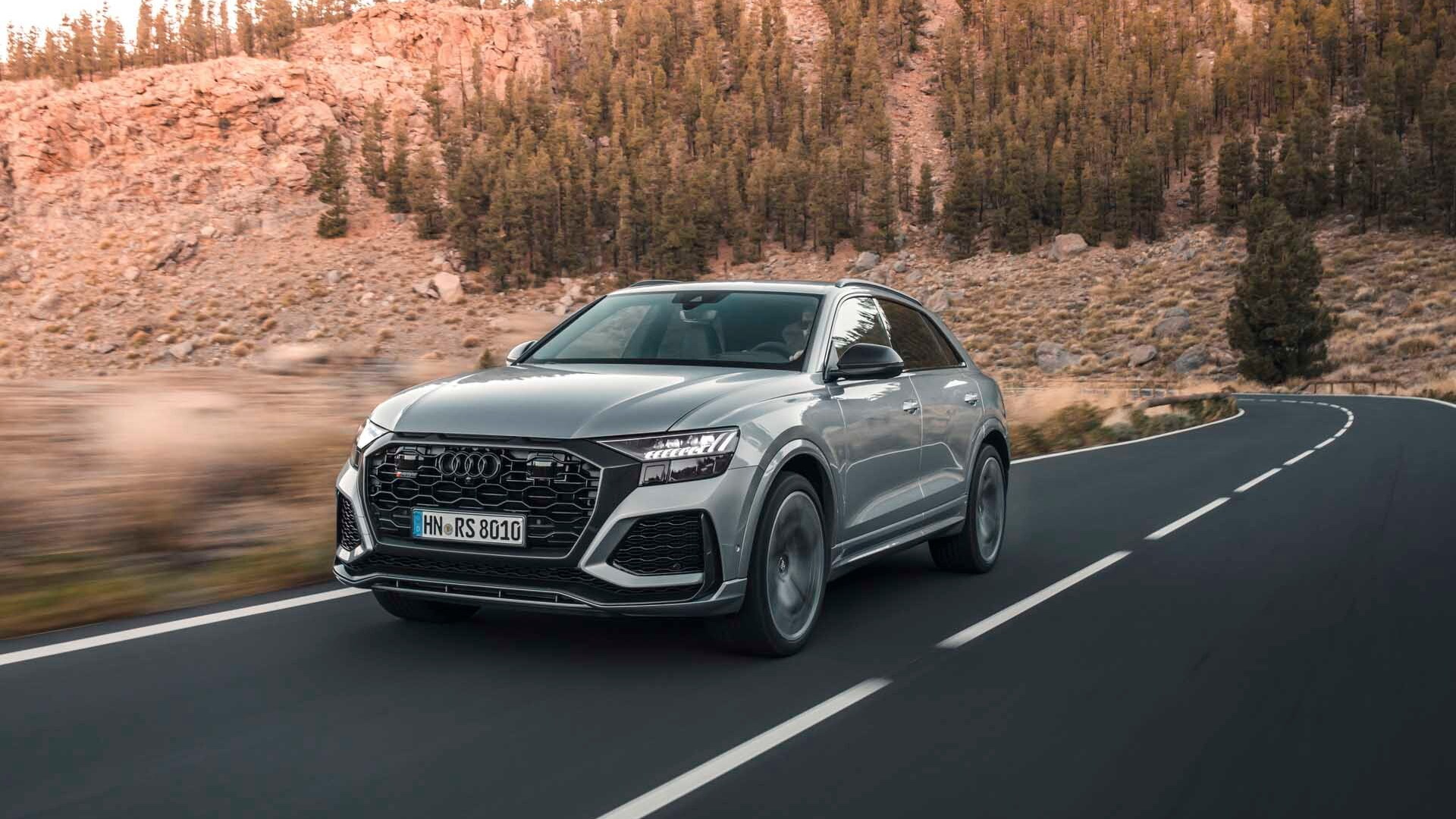 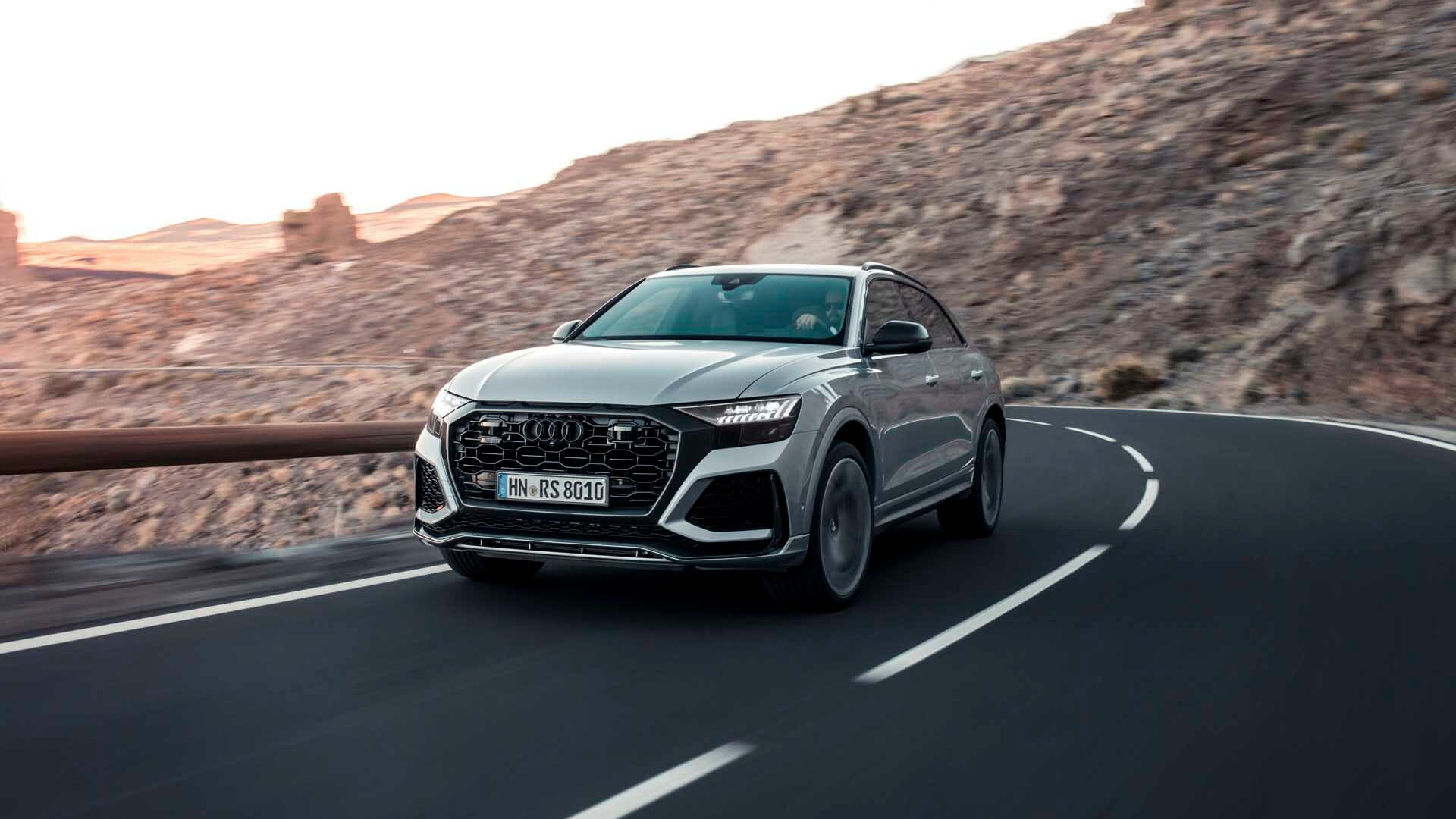 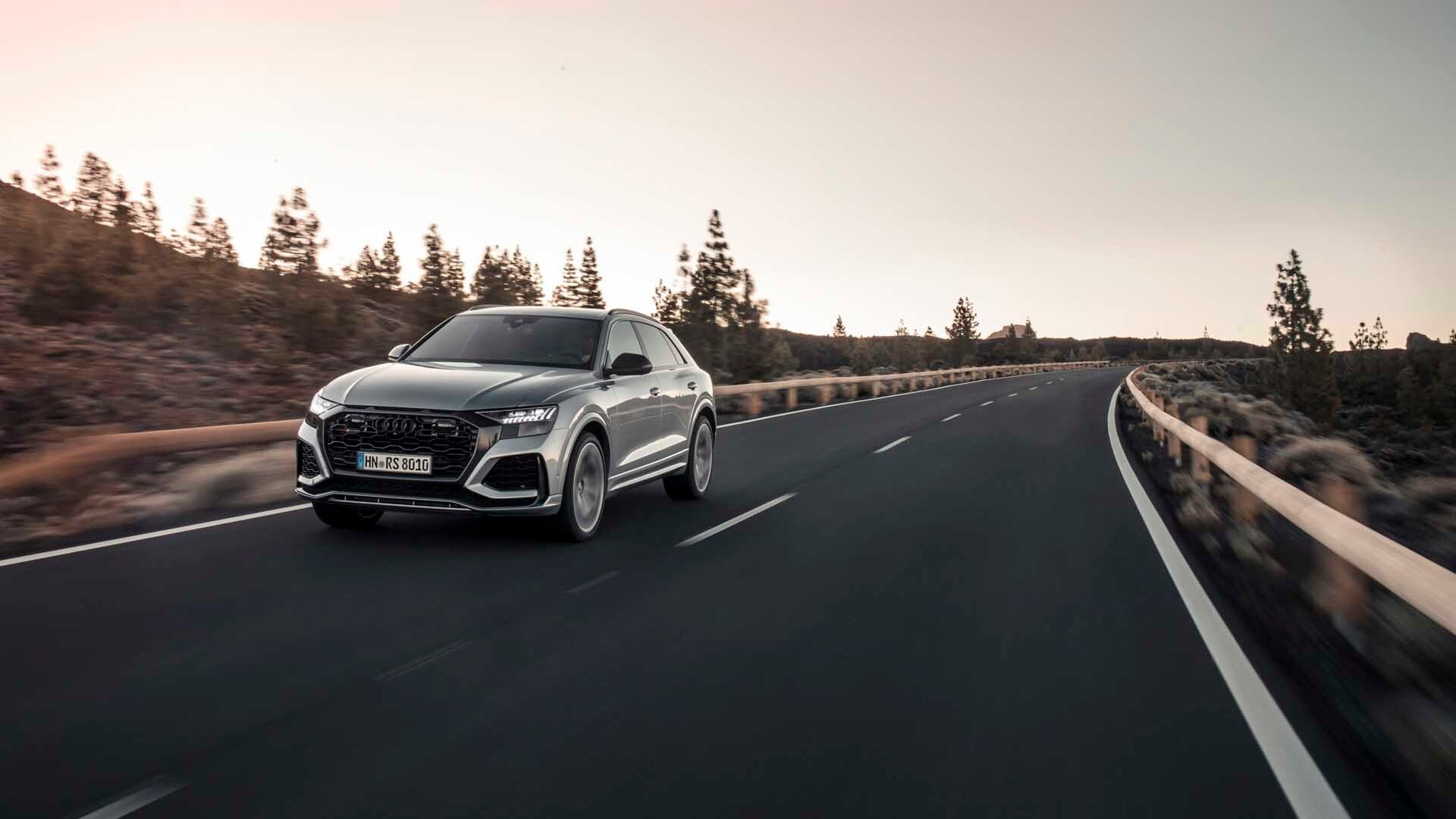 Yet, the 2020 Audi RS Q8 and RS 6 Avant are far apart in mission and execution. Despite their shared engines—a fire-breathing twin-turbo V-8 shared with Lamborghini and sourced from Porsche—the $113,995 RS Q8 and $109,995 RS 6 Avant are distant like the sun-drenched beaches and snow-capped mountaintops on the Spanish island of Tenerife off the coast of Africa. More than 50 degrees separate the air between two; the Audis are even further apart.

The Canary Islands’ impossibly long clouds; tall pines and palms; and purple, red, gold, and brown volcanic rock valleys are where I’ve been given the chance to dash the RS Q8 up a dormant volcano above the clouds and back down to soft, yellow sand in time for siesta.

The RS Q8 squats, screams, then springs toward the next curve with a violent but restrained holler every time. The 4.0-liter V-8 is muffled until it isn’t, deep stabs awake its reserved power and sonorous temblors in this far-flung island ringed by palm trees. Audi officials in the U.S. say our versions will be even louder.

Despite what you may have heard, we’re living in a car-enthusiast paradise. The RS Q8 is only one of five recent Audi Sport models available in the U.S., up from one not too long ago.

The RS Q8 shares its powertrain with the RS 6 Avant and $114,995 RS 7 hatchback, yes. But the RS Q8 will be the one that matters most simply because it’ll be the best-seller among the three—if not the most popular RS model in the U.S. of all time.

The RS Q8 is unassuming but wicked. An SUV with more drama than a beach sunset, it rises above the clouds in a literal and figurative sense. The RS Q8 accelerates up to 62 mph in 3.8 seconds, just a heartbeat slower than the RS 7 and RS 6 Avant, despite its massive size and the need to move air around its bulky crossover frame. The RS Q8 tops out at 190 mph, electronically limited, because moving mountains of air is a helluva chore.

The RS Q8 borrows its skeleton from the Q8 crossover and, by extension, the Q7 crossover. Both of those are family vehicles and the RS Q8 is a family vehicle, too. Its interior isn’t compromised at all by the hulking V-8 underhood, standard rear limited-slip differential, air suspension, or available 23-inch wheels. The RS Q8 seats up to five in supreme comfort and speed—not an inch has changed from the interior space, cargo capacity, or even the ride height. The standard air suspension in the RS Q8 raises or lowers the crossover more than 3.5 inches between off-road and dynamic modes, which is the same as the regular Q8.

In that way, it feels about as special as the Q8 crossover from the inside. The touchscreens are all there along with the copious leg room. The same goes for the reserved color scheme and light steering feel perfect for parking lots.

The RS Q8 gets a flat-bottomed, Alcantara-wrapped steering wheel, stitched with red threads, that’s bezeled at the best angle to wrap, grip, and twist your knuckles around—no matter how light it feels. The wheel is thinner than those found in Mercedes-AMG models or BMW M cars, although the Audi’s wheel feels a little more luxurious and less overconfident about its credentials. Only a red-ringed start button could be considered the flashiest hardware in the RS Q8, and that’s all. “Restraint” may be the first word a German baby learns.

And its raucous 4.0-liter twin-turbo V-8 fires up with a hushed burble inside. Audi’s teeter-totter shifter tips into drive and engages the 8-speed automatic that rifles power through a standard permanent all-wheel-drive system that shuttles up to 80 percent of its torque to the rear wheels. Even with the torque split that never forgets the front axle, the RS Q8 rears up and thrusts forward from the tail through the nose like an uppercut that starts at the bellybutton and pushes through your forehead.

There are two RS-specific drive modes, both accessed via steering wheel-mounted button at 3 o’clock. The drive modes are hotkeys: via the infotainment system, drivers can specify RS 1 or RS 2 drive modes that toggle the steering, throttle, transmission, dampers, intake sound, differential behaviors and ride height. RS 2 is the same but can set the stability control to Sport for more freedom around corners.

Not that there’s much freedom anyway. The big SUV that weighs more than 2.5 tons with people and fuel aboard bites hard into the narrow roads in Tenerife. The wide 295-millimeter Continental Sport Contact 6 tires dig their heels into the Teide National Park roads that squiggle up toward the island’s dormant volcano. Audi pro driver Frank Stippler, who set the production SUV record lap in the RS Q8 around the Nurburgring-Nordschleife at 7 minutes, 42 seconds, used Pirellis on his lap in Germany but didn’t mind subbing in a set of the Continentals for his drive through the island.

Rear-wheel steering that can countersteer up to 5 degrees from the front wheels virtually shortens the car’s wheelbase to trace an even tighter line around the twisty roads. Coupled with a standard sport differential on the rear end and wide rear tires, the RS Q8 begs for hard corners out of the daily slog. Its steering is a shade too light and a shade too numb to feel like anything but a luxury SUV—even at its firmest setting. And for more than 150 miles, the RS Q8 skittered along glassy roads in the Canary Islands without interrupting any of my conversations.

The Spanish islands were the virtual bridge between Europe, Africa, and the Americas; a port stop for traders (and slave traders) and pirates. The sun clings to the water as the waves roll into the volcanic island, and the sea air wafts past the Spanish colonials painted in muted pastels and terra cotta.

The RS Q8 is a virtual bridge, too. For well-heeled buyers willing to plunk at least $113,995 down for one, the RS Q8 will be a bridge from the automaker’s conservative crossovers to the wild child Audi Sport brand and their hot wagons and hatches. (By extension, the Lamborghini Urus and Porsche Cayenne, too.) If it’s any indication of what Audi expects from the RS Q8, the RS 6 Avant is build-to-order, while the RS Q8 will be ready to go when you are.

Update: This story has been updated to include prices from Audi for the RS Q8, RS6 Avant, and RS7.