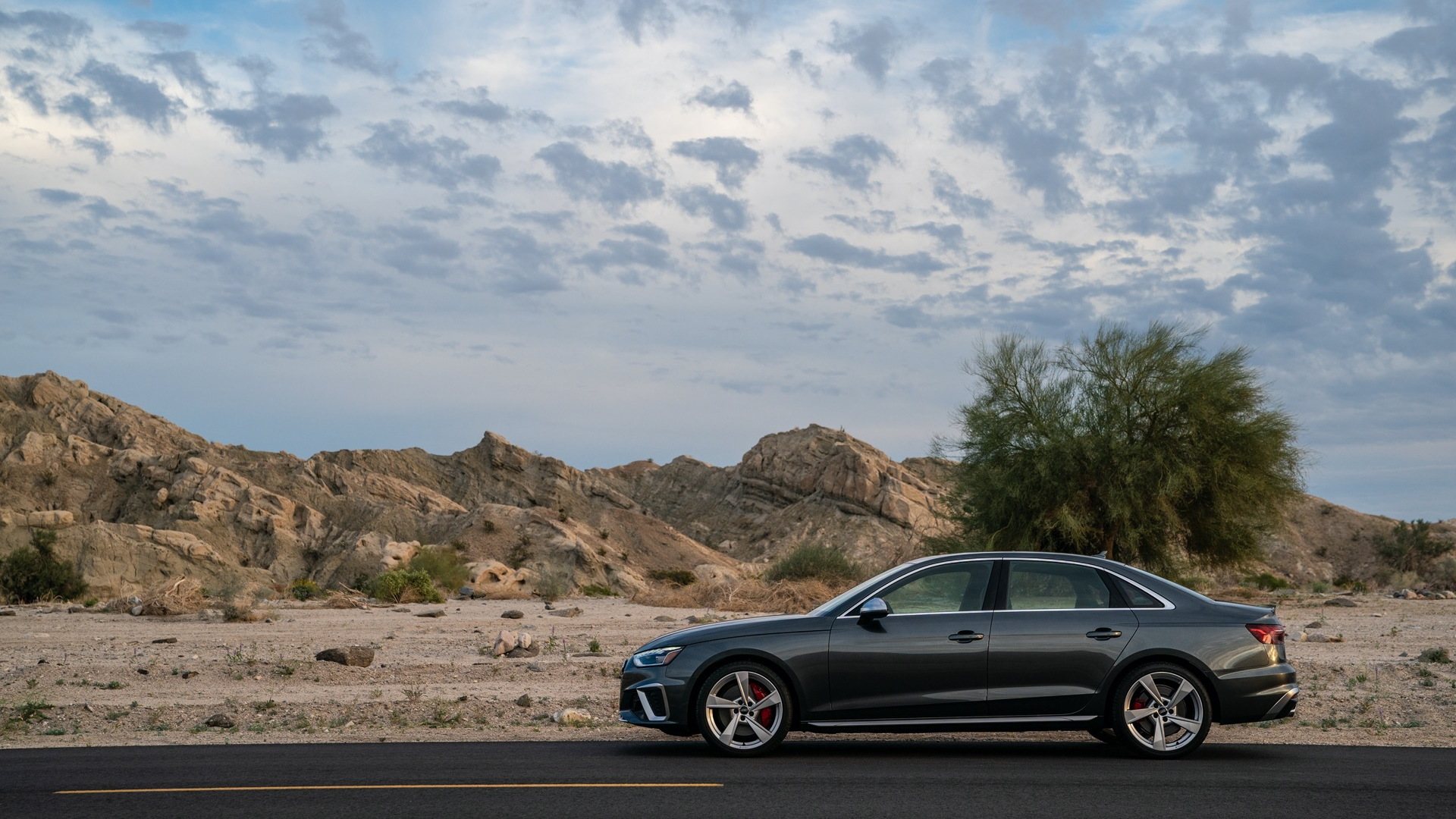 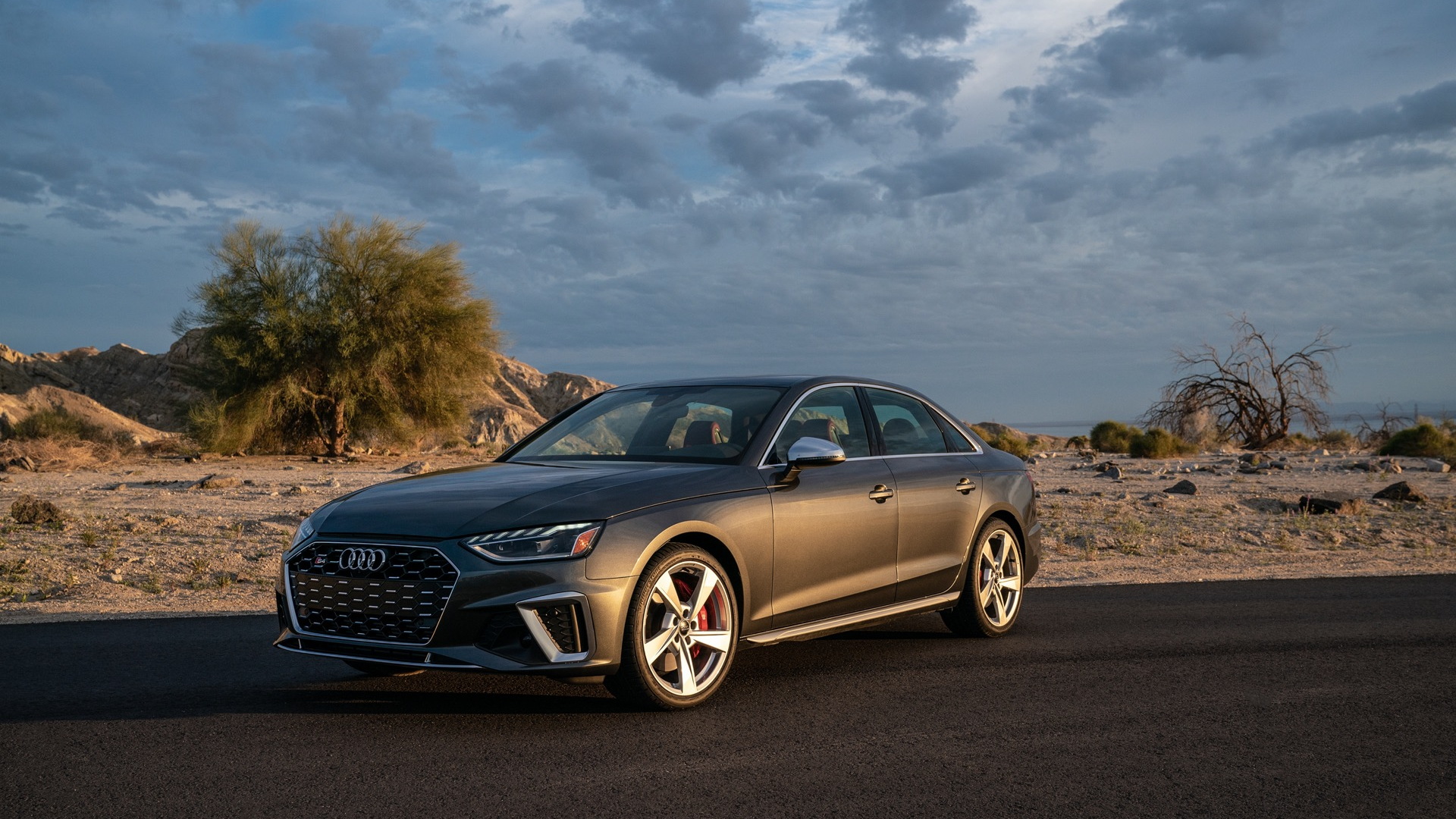 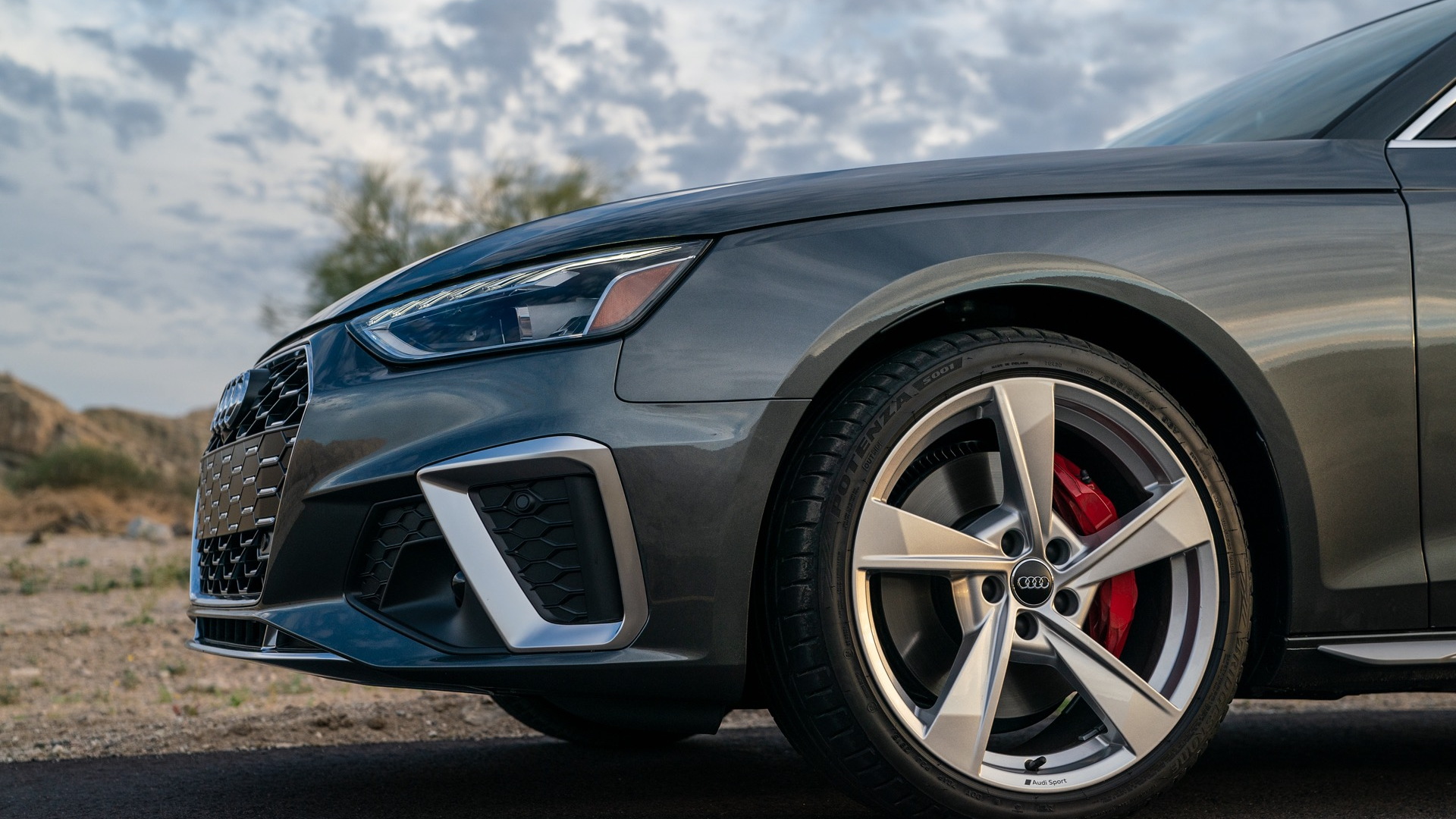 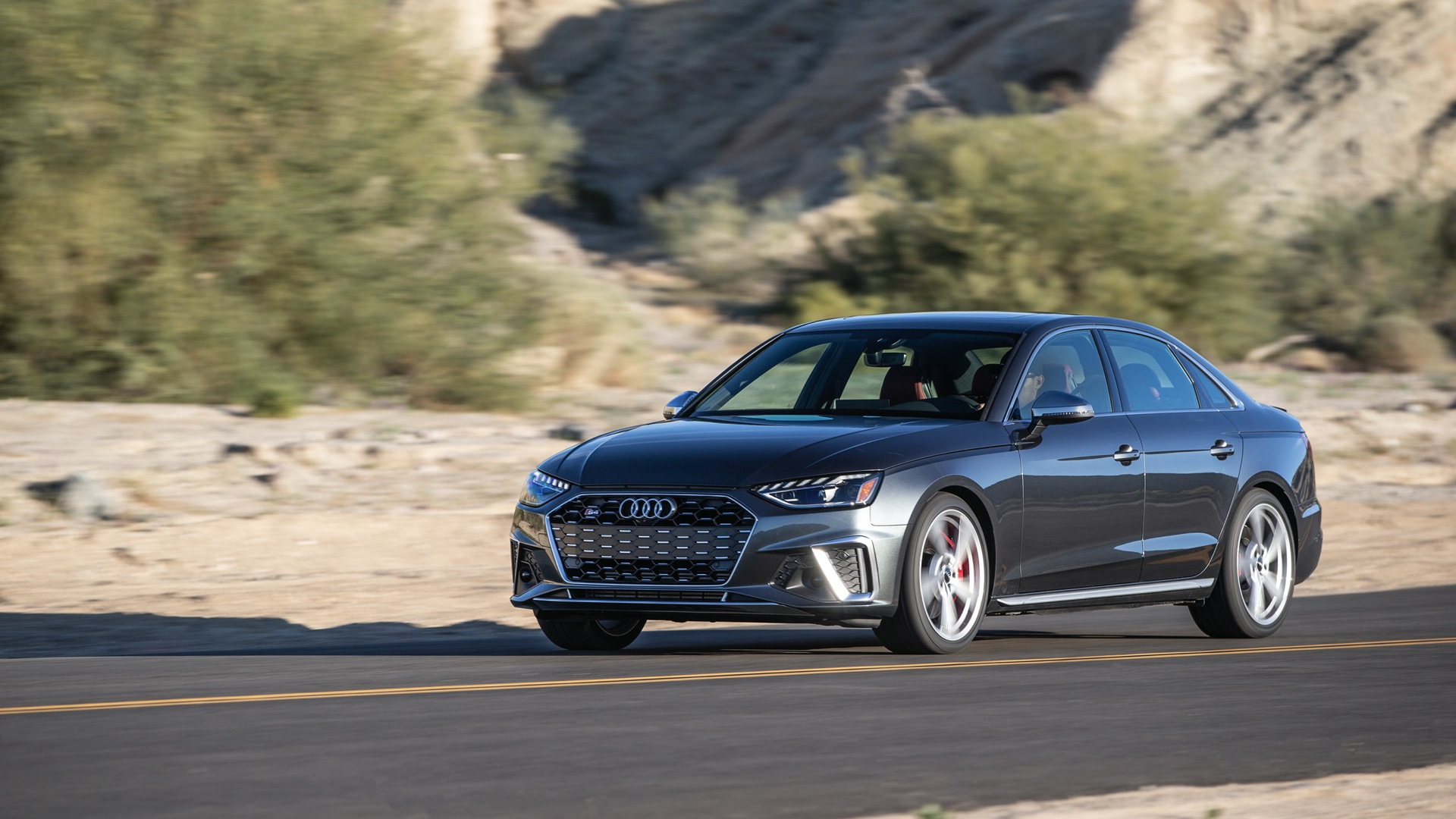 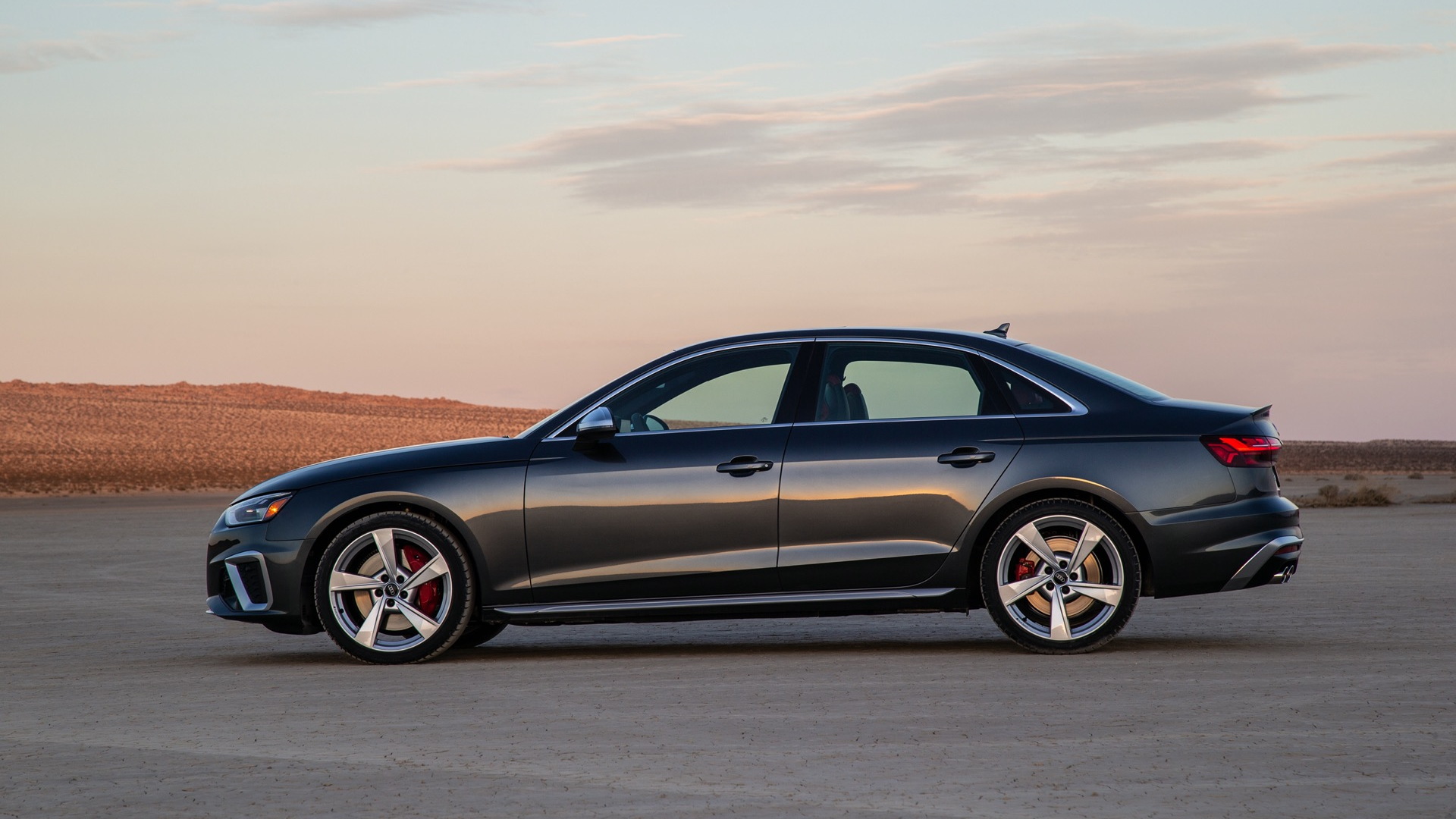 On one long stretch of desert road, where only roadrunners and tumbleweeds kick up any dust, the 2020 Audi S4 exceeds the speed limit without an effort. Only some loose gravel left over from a flash flood could slow it down.

This out-there place in the American Southwest is much more than what it seems. The temperature swings more than 40 degrees day to night. Oranges, dates, and olives thrive, and sweet scented orange blossoms tinge the hot dry air with an exotic fragrance. The prickly pear cactus can be eaten, or, in places such as Palm Springs, California, made into margaritas. Fiesta, flora, and fauna—life of all kinds—bloom amid the barren rock heaps and sun-drenched earth.

So too is the 2020 Audi S4 much more than what it seems. The sedate compact sedan wears only minor differences from the refreshed A4. The honeycomb grille replaces the slats on the A4, 18-inch wheels come standard, the door handles are body color, and quad chrome exhaust tips mark the rear. Yet just about every panel except the roof has been adjusted, including a less-pronounced rocker crease that rises up into the buff rear bumper.

The changes for 2020 are as subtle as the S4. The powertrain is the same, but the technology on the inside is quicker, clearer, and improved, but still familiar.

Lighter, lower, and wider than the M340i, the S4 selected by most buyers will also have adaptive dampers as part of the $2,500 S sport package.

On such open roads with no oncoming vehicles, turnouts, people, or anything but desert, the S4 is impressive but not mind-blowing, even as it reaches speeds higher than the desert’s highest temperatures. The handling is sure at high speeds, even as it gets challenged by road undulations severe enough for successive “Dip” signs. The front end squeezes down into the depression, creating compression that tickles the gut, and the car feels like it could get air off the incline. It doesn’t. Instead, the active damping in Dynamic mode keeps all four wheels planted to maintain grip and stability, which lets the S4 get back up to speed. The 6-piston red caliper front brakes, also part of the S sport package, have no problem stopping on a dime when the next dip reveals a dusty wash out from a recent flash flood.

With the standard Quattro all-wheel-drive system, 85% of the torque can shift to the rear axle, and the S Sport package’s electronic limited-slip rear differential with torque vectoring can send nearly all of that torque to either rear wheel. We didn’t get to track it to push the corners of its handling, but past experience tells us there are better track cars in the Audi stable.

It isn’t until we approach town that the S4 has the opportunity to flit and dart about, sharp as the prick on a cactus. Everyday driving, even in a Palm Springs rush hour, becomes a blast in the S4.

I want to keep going, even after seven hours of driving and riding in Audi vehicles.

With the turbocharger nestled between the banks of the V-6, there isn’t much lag from a stop. But in and out of turns it pays to be aggressive with the small but perfectly sized paddle shifters, or the 8-speed can hesitate to reach for the lower gear. The transmission is quick and smooth, but it is quick to shift if you push it near the redline. I set it to Dynamic mode and didn’t think to change the settings again in my afternoon with the S4.

The S4 comes with Audi’s chunky flat-bottomed steering wheel, which has the kind of hefty reins you’d want from a steed with twice the power. It’s responsive to inputs, especially zipping out of a turn or around the slow-moving RVs that dot this landscape, but it doesn’t feel as directly tied to the road as I’d prefer in a performance car.

That’s not a bad thing, as the cabin of the S4 is as comfy under the gun as it is while cruising, even with the Prestige trim’s 19-inch wheels. The centerpiece of the cabin, as well as the interior updates for 2020, is the new 10.1-inch touchscreen as part of the MIB 3 infotainment system. It looks like an aftermarket piece protruding from the dash above the vents, but its functionality raises one of the best infotainment systems on the market to the best.

Gone is the rotary controller dial on the center console. Now the touchscreen uses audio and haptic feedback to replicate the feel of buttons. It’s easier to use than other touchscreens, but there is still that question of safety as your hand and eyes scroll through the menus. Fortunately, the icons are larger, the design is intuitive, and there are still hard controls for the climate functions. The screen’s handwriting recognition is the most accurate I’ve encountered. It’s an actual feature, not just a gimmick.

Even better, just about all the info on the touchscreen can be accessed on Audi’s improved Virtual Cockpit with a 12.3-inch digital instrument cluster. The processor powering of MIB 3 is 10 times more powerful than the old system, making it faster, clearer, and easier to use. The Google Earth map projection is fantastic, and mimics what you’re seeing around you, or what you can’t see from overhead. The various views, with the map blanketing the whole display, or located in the middle, or moved to the margin, should appeal to even the most tech-averse among us. I would use it over CarPlay navigation for every trip.

It’s yet another reason why I’m driving the S4 farther than Audi’s dedicated route.

As the sun fades and night beckons, the 2020 S4 is more than it seems, and that encourages me to keep the windows down, the music loud, and drive for just a bit longer, to who knows where.

Audi provided travel, lodging, and meals to bring you this firsthand account.