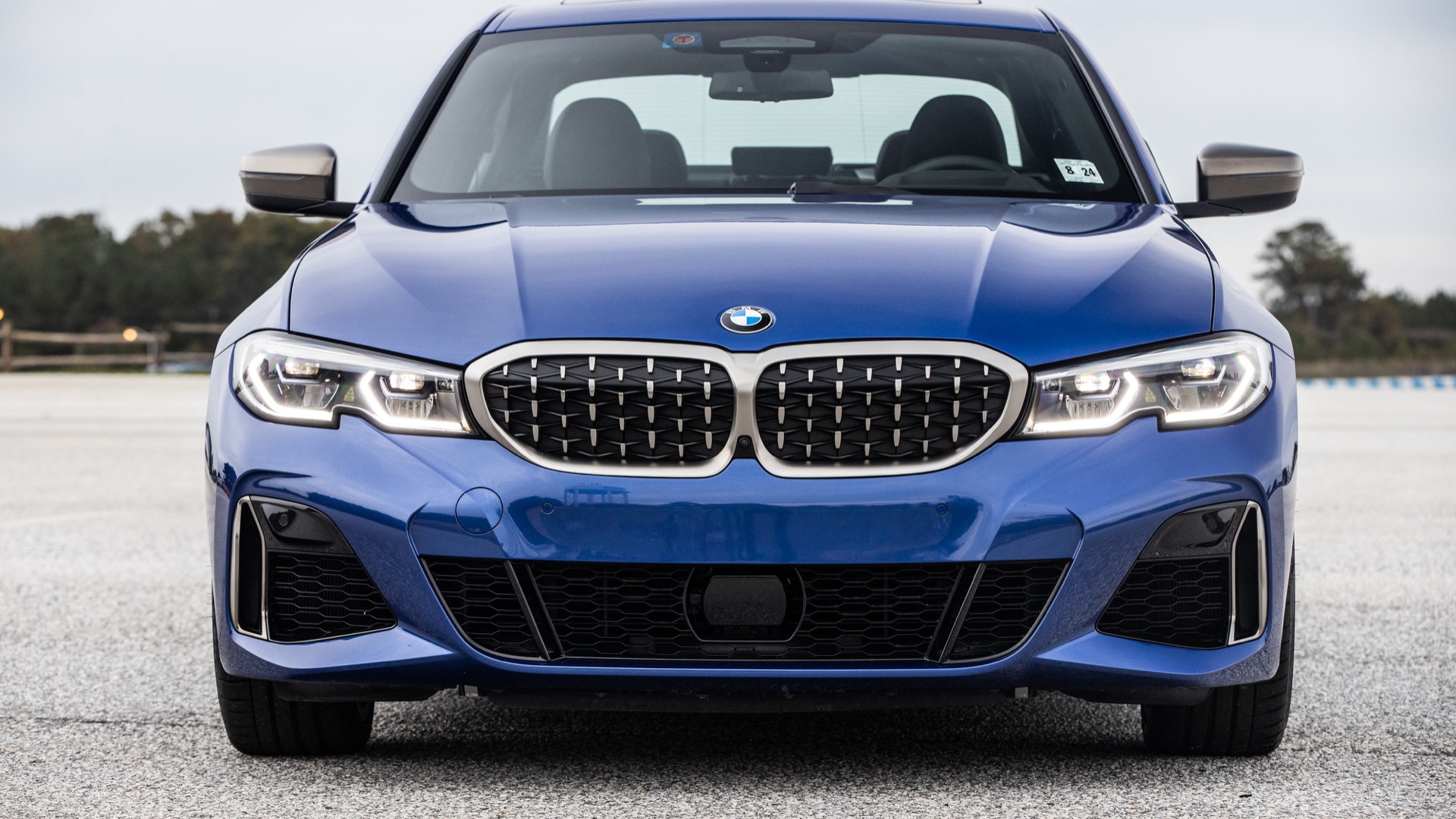 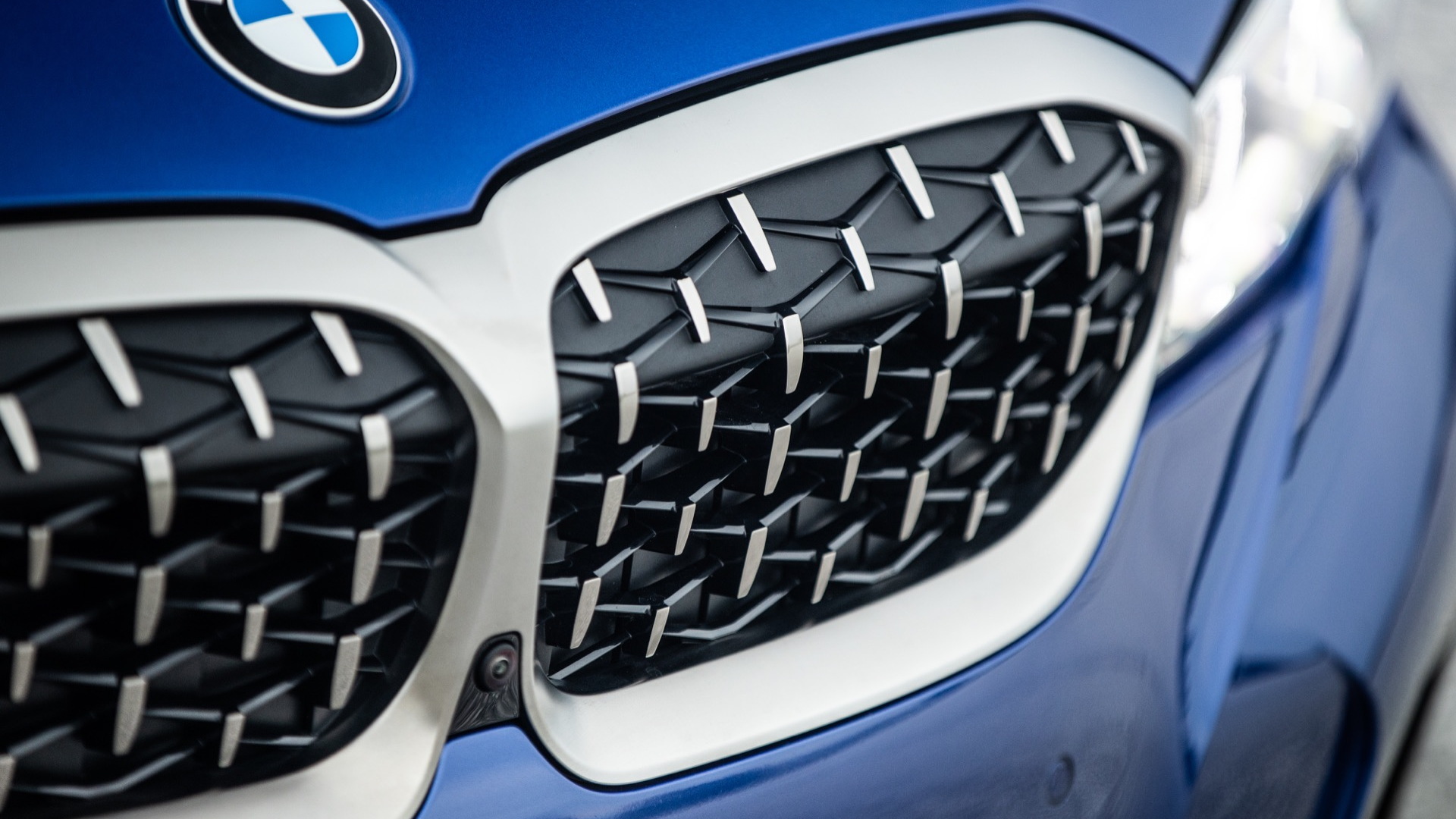 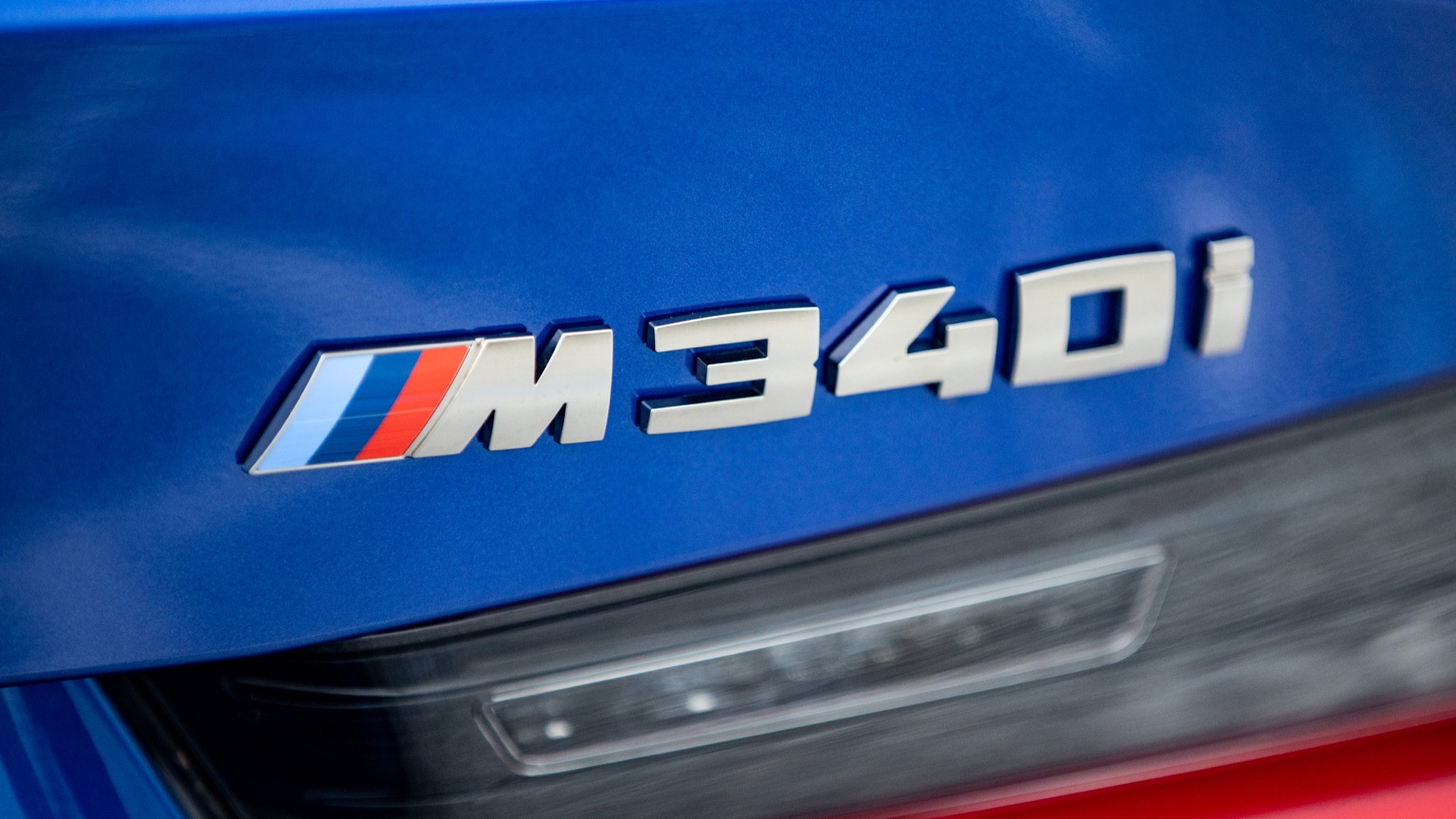 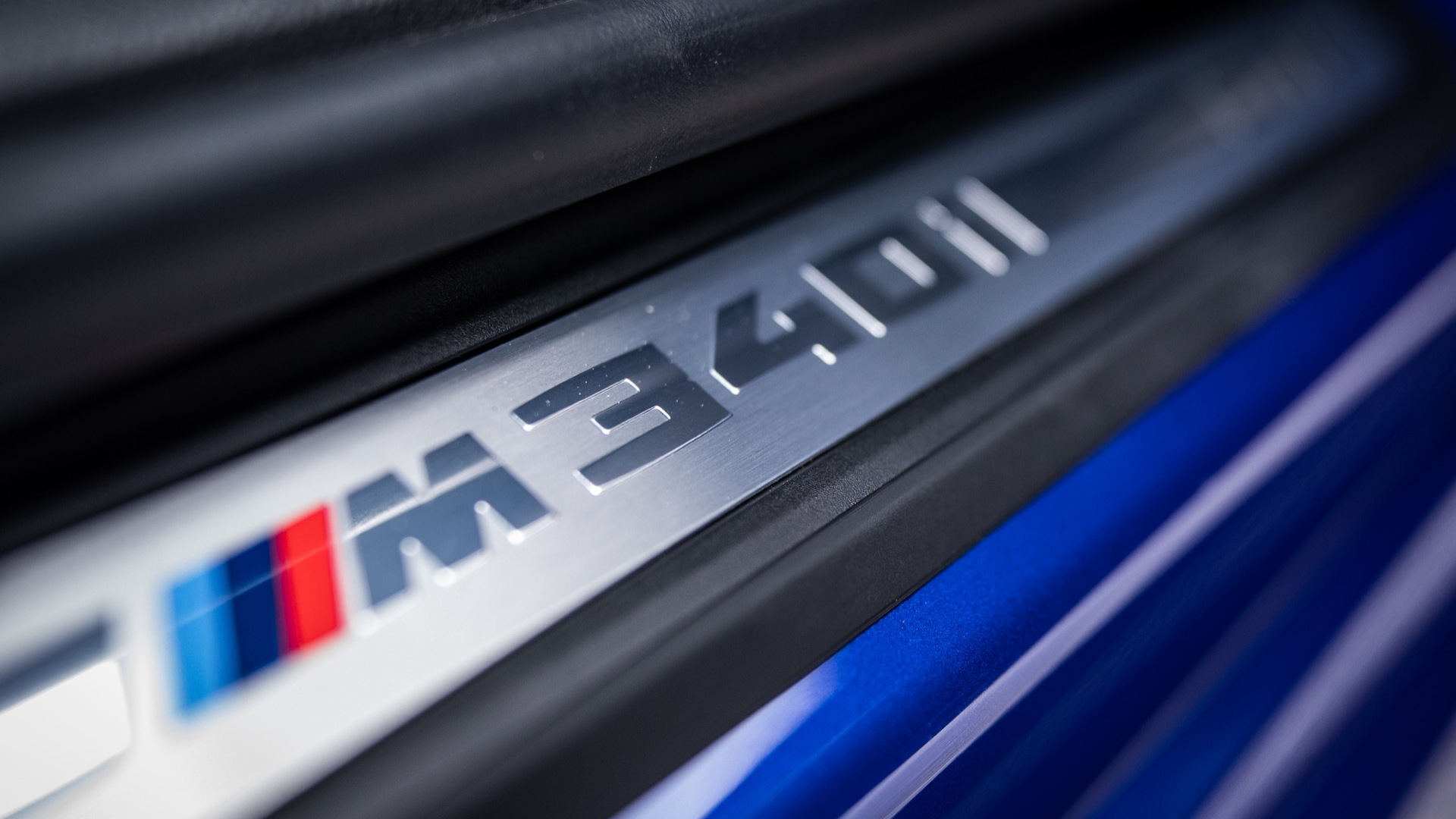 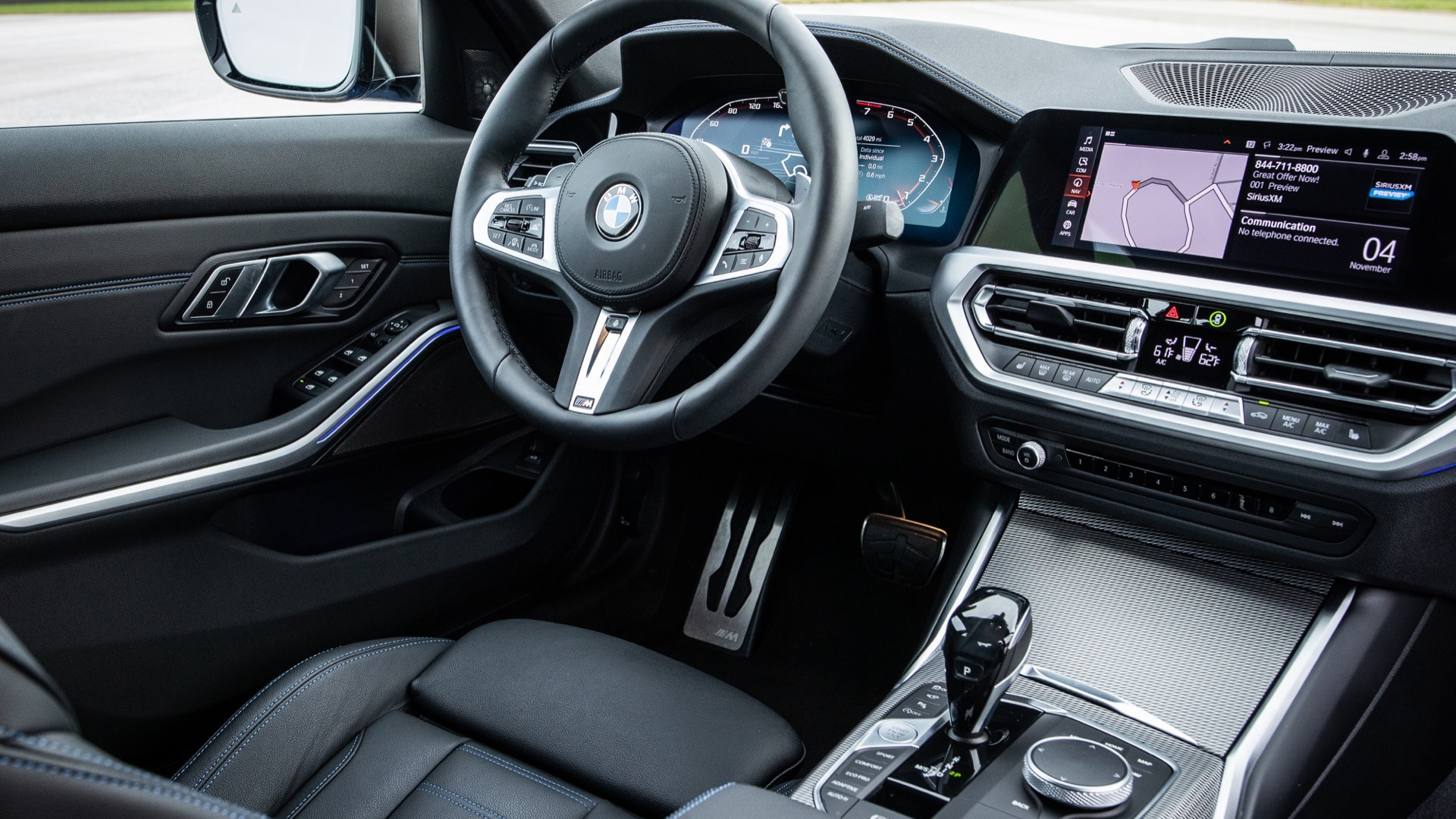 The tricky part of the track is shaped like a heel. This time, in the 2020 BMW M340i, I push the instructor, as ordered.

After braking hard into a left, I shift the M340i into a quick right before the 120-degree angle left around the bulbous heel. In testing the Z4 and M8, I’ve come to appreciate the need for late apexes. This time, however, I apex a little too late and the car drifts then slides toward the wall at the furthest section of the track. The electronic locking rear differential helps me correct the slide and I’m back on line, cursing the growing gap to the instructor’s M5.

“I want to see your grille not your doors,” the instructor cracks over the walkie talkie wedged in the door pocket.

Now we’re in the long straightaway before the corkscrew at the BMW Performance Center’s track in Spartanburg, South Carolina. The throttle is mashed, drawing on the full force of the updated B58 3.0-liter turbo-6 that now churns out 382 horsepower at 5,800 rpm and 369 pound-feet of torque from 1,800 through 5,000 rpm. It’s my favorite part of the track, where I can keep the quick-shifting 8-speed automatic in fourth and hit the redline of my soul. BMW says this car launches to from 0-60 mph in 4.2 seconds, but on this stretch it’s nearing 100 mph quicker than I can notice.

The corkscrew is where the M340i’s bevy of M performance bits make the car feel most at home. Brake hard into the corkscrew left and the initial pedal travel surprises me; the M Sport brakes don’t push back until I apply a little more force, then those four-piston front calipers get to work on the 13.7-inch rotors. The tester is fitted with 19-inch wheels with aftermarket tires. The standard version comes with 18-inch wheels and all-season run flats that turn the M340i into a stone skipping across the track. Don’t get the all-seasons if you’re going to push it.

The corkscrew notches left, right, up a hill, then left to right at the crest. I don’t know how fast we’re hitting it, but I push it harder each subsequent lap because the car shifts its weight laterally nearly as well as it does front to rear with its near 50/50 front-to-rear weight distribution. It stays centered, the steering precise and sensitive to each tic of the wheel. It’s amazing how little sideways travel there is in the four turns of the corkscrew. The wider track and longer wheelbase help, as does the nearly half-inch lower ride height with the M suspension, but mostly it’s the optional adaptive suspension with electronic dampers individually controlling each wheel. For only $700 more, it’s a must-have for anyone considering track days or spirited driving. It makes me forget my slip up and build more confidence the longer I’m on the track.

Back in the paddock, I don’t need to remind the instructor that I’m no pro and he’s too much of a pro to remind me. He compliments the correction, cites the too-late apex, and leads another group out in an endless array of BMW performance cars. As much as I want the heavy assurances of the blistering M8 or the tight package of the whipsaw Z4, I jump back in the M340i. It makes me work more, and I need the work.

Each subsequent lap teaches me more about the track and the car’s nuances. That correction was about the M340i’s hardware and software lending a hand.

We were tracking in the Dynamic stability control setting, which is one tic away from having ESC shut off. When the system detects the outside wheels losing grip, it taps the electronic parking brake to use the rear brake calipers to help the driver correct the line.

Better drivers flog it in the tighter, most technical parts of the track, and most of those drivers are BMW product specialists. This is one of the charms of tracking the 2020 M340i at BMW’s North American home in Spartanburg: the people in charge of the cars are more than just marketers, they are drivers. The best times in the autocross overwhelmingly belonged to them, not the journalists. You can cite a home-track advantage, but it’s more about the Bavarian blood racing through their veins. For most, if not all of them, the enchantment with the brand started before the job with the 3-Series.

Bigger but still a benchmark

For years, the 3er was the paragon of the compact performance sedan. It brought race day thrills to a new generation of drivers who could commute with style and comfort, its performance potential only a toe tap away. That double duty is still the essence of the 2020 3-Series, even as it grows to nearly mid-size proportions and is laden with enough tech to confuse an engineer.

Every other automaker has used the 3-Series as a benchmark, even though the softer outgoing F30 generation couldn’t match the standard of its predecessors. The seventh-generation G20 is not the same as the F30, nor should it be. It doesn’t look much different on first glance, but the long nose seems to dip down a bit more even as the twin-kidney grille merges body parts into one larger, chrome-wrapped piece. The body lines flow from the LED lights with curvy flourishes. It’s still muscular in the way of sport sedans, but toned for these cross-fit times. It's nearly three inches longer and a half inch wider, it has a 1.6-inch longer wheelbase, and all the M Performance components have added at least 150 pounds over the old 340i.

In back-to-back laps with the Z4 roadster, the M340i’s size is obvious. Even the larger but lower M8 felt more ready to attack the track, as it should for more than double the price. Still, the M340i can get in and out of corners in a hurry, straight-line acceleration is an adrenaline shot, and the lateral and longitudinal movements stay centered.

The 2020 M340i excels away from the track in everyday use, too, especially on undulating single-lane roads that twist and bend in a natural way that matches the car’s athleticism. Few trackable cars can soak up road imperfections in one mode, then on the next turn tighten up with track-car balance, M8 and Z4 included. The M340i lets you drop the kids off at school, go to the meeting like a responsible adult, then hit the track.

Following the launch of the 2019 330i ($41,195), the 2020 M340i ($54,995) straddles the divide between the stylish everyday driver and the full M performance model due next year. The B58 engine is shared with the X3 M40i, X4 M40i, and Z4 M40i. It gets expensive and BMW has creative ways to extract performance and pocketbooks alike. Anything but white paint will cost at least $550 extra, a power trunk is $250, and, until recently, BMW was charging extra for Apple CarPlay after the first year of ownership.

Conveniences such as sport seats and the much improved Live Cockpit Pro infotainment system soften the upcharge on the M340i, but heated seats and a heated steering wheel still cost extra (Premium Package for $1,400). As tested, the M340i ran $67,070. All-wheel drive adds $2,000.

Even though most of the upgrades are performance oriented, ranging from the M steering wheel to the rear differential and brakes, the M340i comes loaded with cutting-edge tech. BMW includes five ways to adjust the audio system, from steering wheel controls to expanded gesture controls.

The centerpiece of Live Cockpit Pro is a new 12.3-inch digital instrument cluster that spreads the tach and speedo out as framing devices, so the center is a map view and the right side can be configured to show everything from what’s playing on the audio system to horsepower and torque gauges. Audi’s Virtual Cockpit is better, but Live Cockpit Pro with iDrive 7.0 is an improvement, even with the gimmicks.

BMW’s intelligent personal assistant features Siri-like voice commands. “Hey BMW, why not simplify the menus on the 10.3-inch touchscreen so you don’t need to use the console controller or the screen, once you learn to speak the language?” There’s even an optional self-parking feature (part of the $2,100 Executive Package with Gesture Control).

All of these features and capabilities make the 2020 M340i the no-compromise sport sedan. Comparing it to the past is to live in the past. It’s larger and handles larger. Yet it is unquestionably trackable and it’s also the kind of sexy everyday driver that instills a sense of privilege and gratitude that you’ve arrived, not so much into adulthood but more into a new world of driving. After the M340i, it’s highly unlikely you’ll ever return to an ordinary everyday driver.

BMW provided travel and lodging to Internet Brands Automotive to bring you this firsthand report.