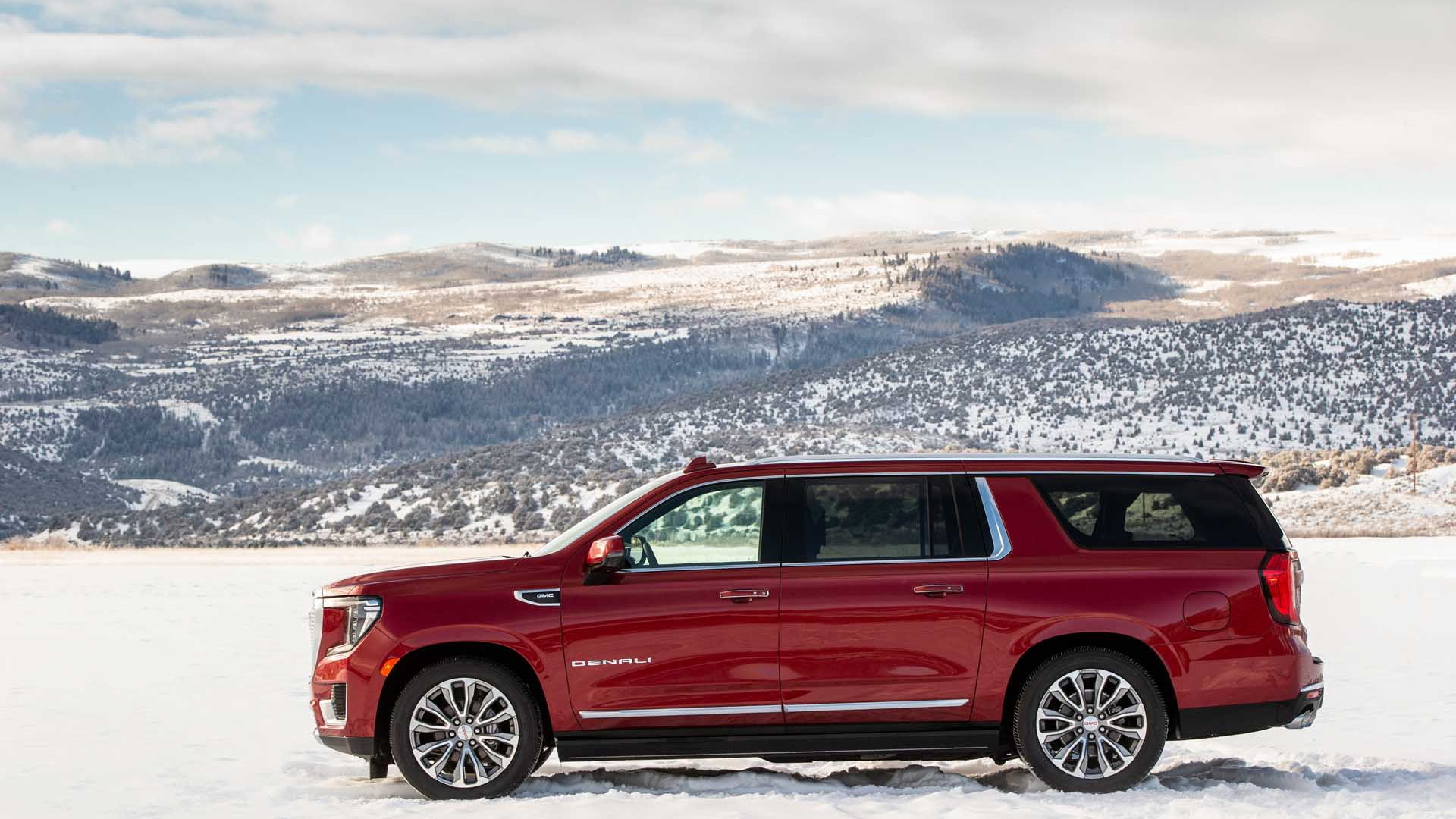 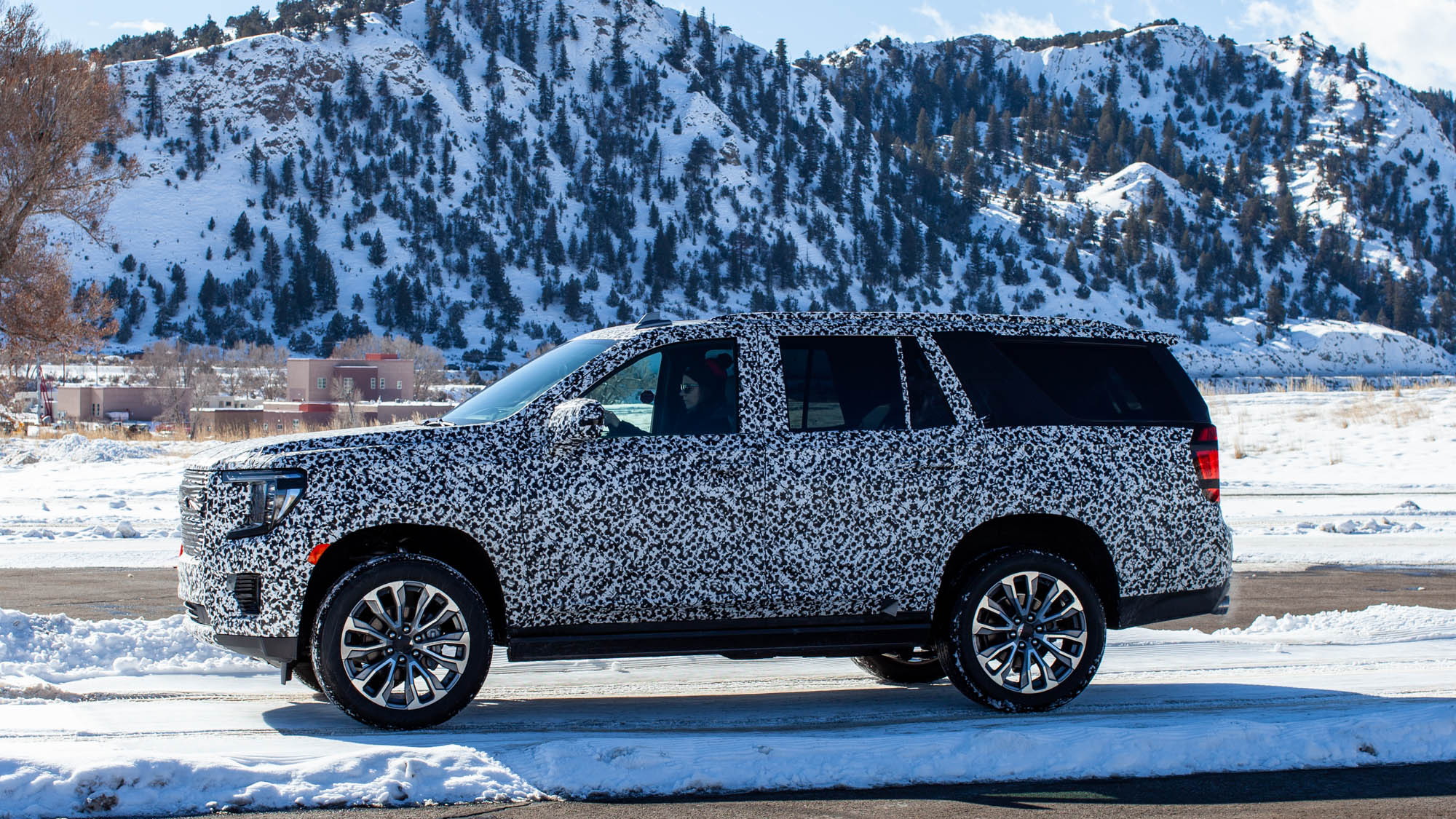 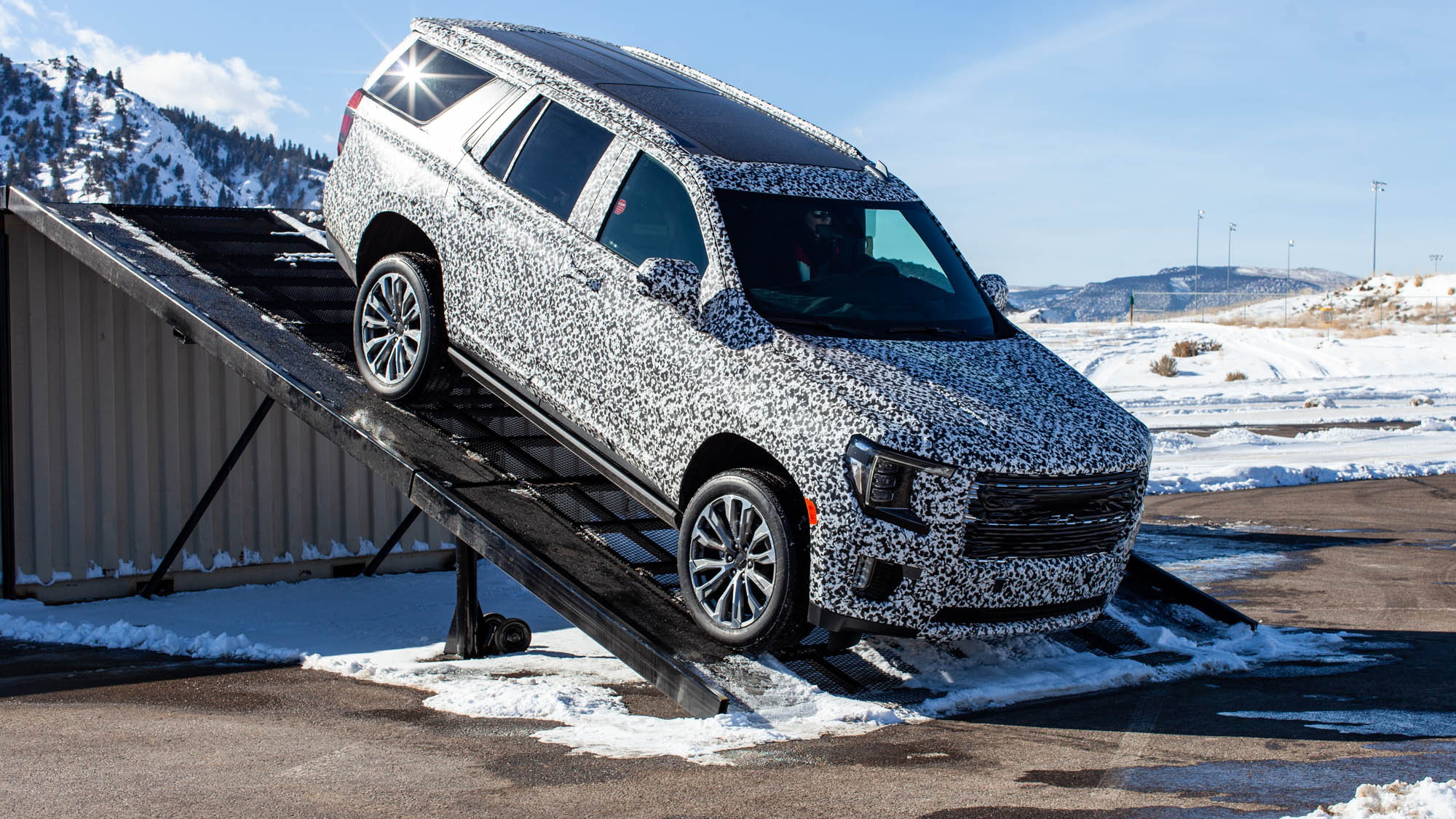 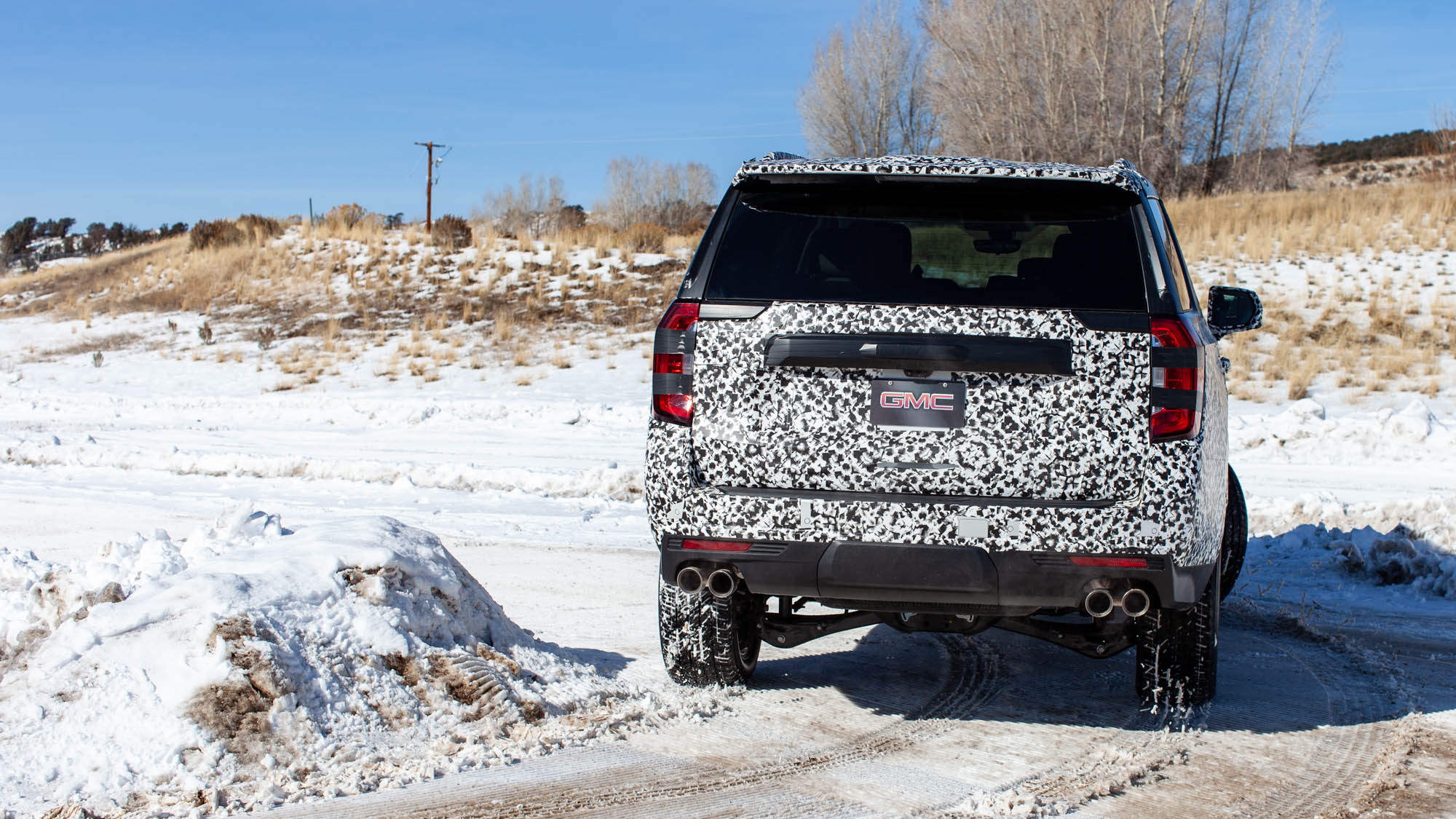 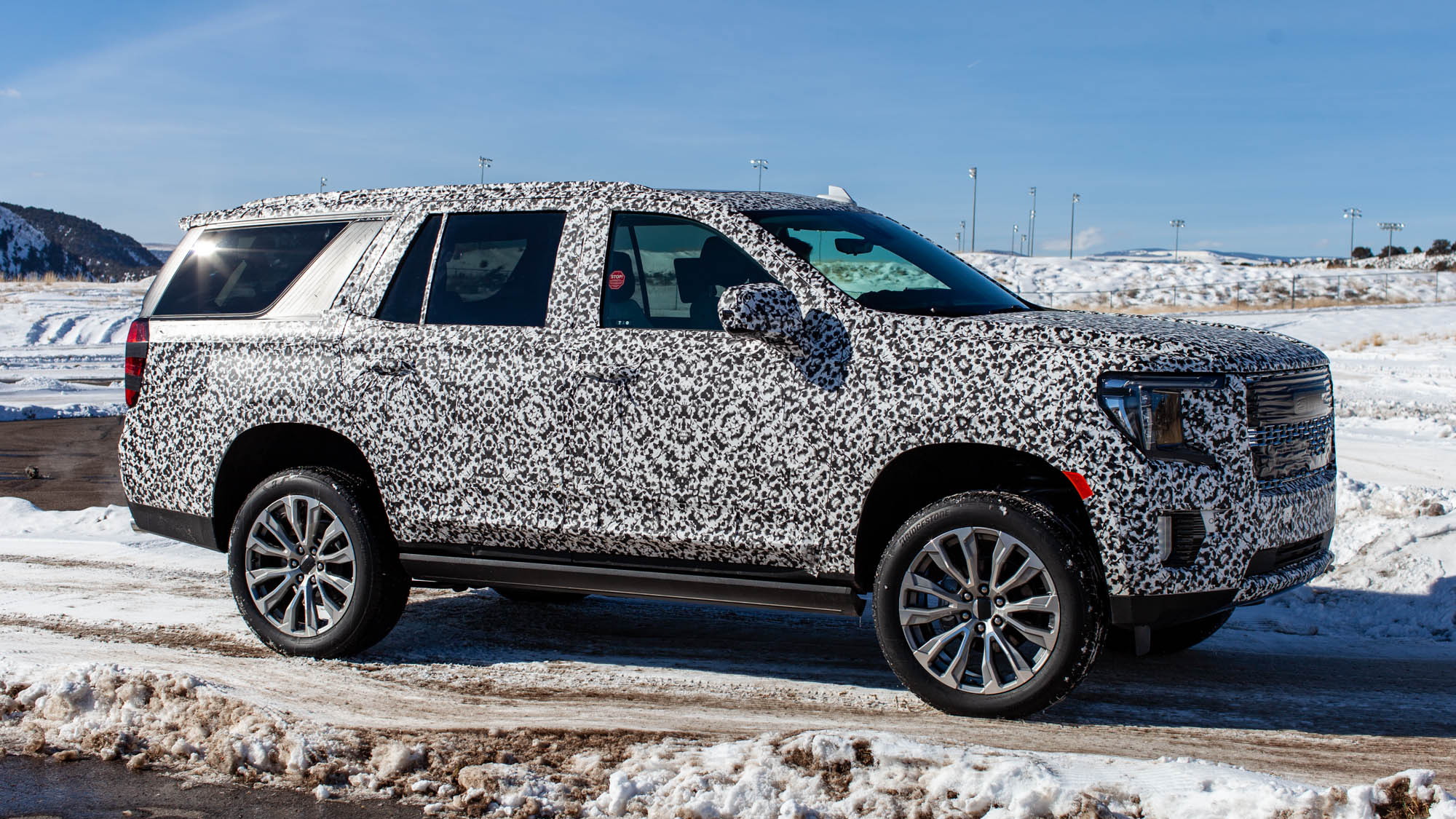 Pack your trunks for the next family cruise: The 2021 GMC Yukon Denali is the fantasy-class liner setting sail for family road trips this summer.

It’s the calorific version of the Chevy Tahoe-GMC Yukon-Cadillac Escalade trifecta; the GMC has been class without too much sass. At least, that’s how it has been in the past.

This time, for 2021, GMC has given the Yukon Denali a thorough overhaul including its own unique interior and dashboard and a potent pair of powertrains designed for smooth sailing.

Although GMC officials didn’t specifically tell us we were driving a Yukon Denali—the dash was mostly covered in a thin black woven fabric—the rear touchscreens, contrast-stitched leather interior, wood trim peeking through the fabric, and electrical tape covering the “Denali” badge in the steering wheel were our first clues. Additional hints? A hulking 6.2-liter V-8 underhood that made 420 horsepower and 460 pound-feet of torque that’s standard on the Denali when it goes on sale this summer. An optional turbodiesel will arrive later in the year, although GMC isn’t making specific promises. (See 2019 Silverado, Chevy.)

Our drives of the Yukon were limited to a very small loop near Vail, Colorado in a snowy lot to highlight the SUV’s rear limited-slip differential, adjustable ride height, and off-road modes.

Indeed, the Yukon’s limited-slip differential was able to grasp the correct side of the road when the left and right tires were split between asphalt and ice. The same goes for the adjustable suspension, which raised the big SUV two inches to climb an 18-degree grade and descend at 1 mph without the driver’s foot on the brake pedal. Magnetic ride control smoothed over the choppy snow, thanks in part to a faster electrical architecture that allows each sensor to communicate quickly with the car.

All the Yukon’s hardware is new or new-ish. Previous iterations of the Yukon have offered an air suspension, but only on the rear as a load-leveling device for towing. The same goes for the limited-slip differential—electrical instead of mechanical this time around. Magnetic ride control is updated to a fourth-generation system to make use of the updated electrical hardware.

A new, bigger body wraps around the frame and offers more conveniences this time around. Although the camo’d Yukon didn’t reveal many secrets, we spotted USB ports for nearly every seating position, including USB-C ports in the rear.

The second-row seats slide fore and aft at least five inches for easy entry into the third row, and although the rear-entertainment touchscreens were disabled, the seat-mounted tablets were very large and integrated well into the headrests.

Our time in the second and first rows was limited to just a few minutes each, but the seats were comfortable and spacious for big bodies. Ditto goes for the leather, which was softer than a 6 p.m. dinner bell in the ballroom on the upper deck.

In case we’re not clear, the 2021 Yukon is fit for a family cruise across the country.

GMC estimates that more than half of Yukons on the road will be Denali models. That’s good, it’s a prince or princess liner of the open road.