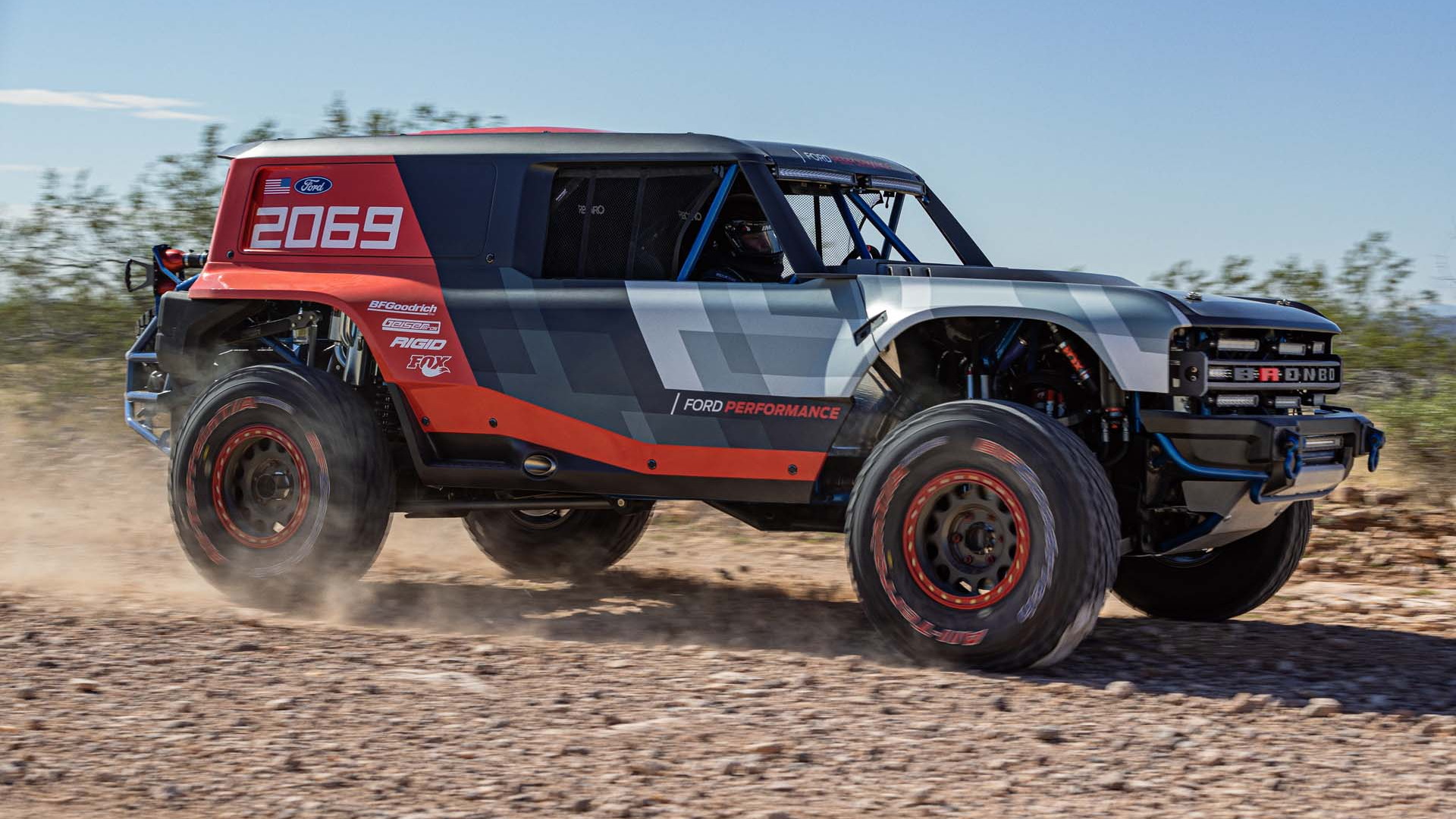 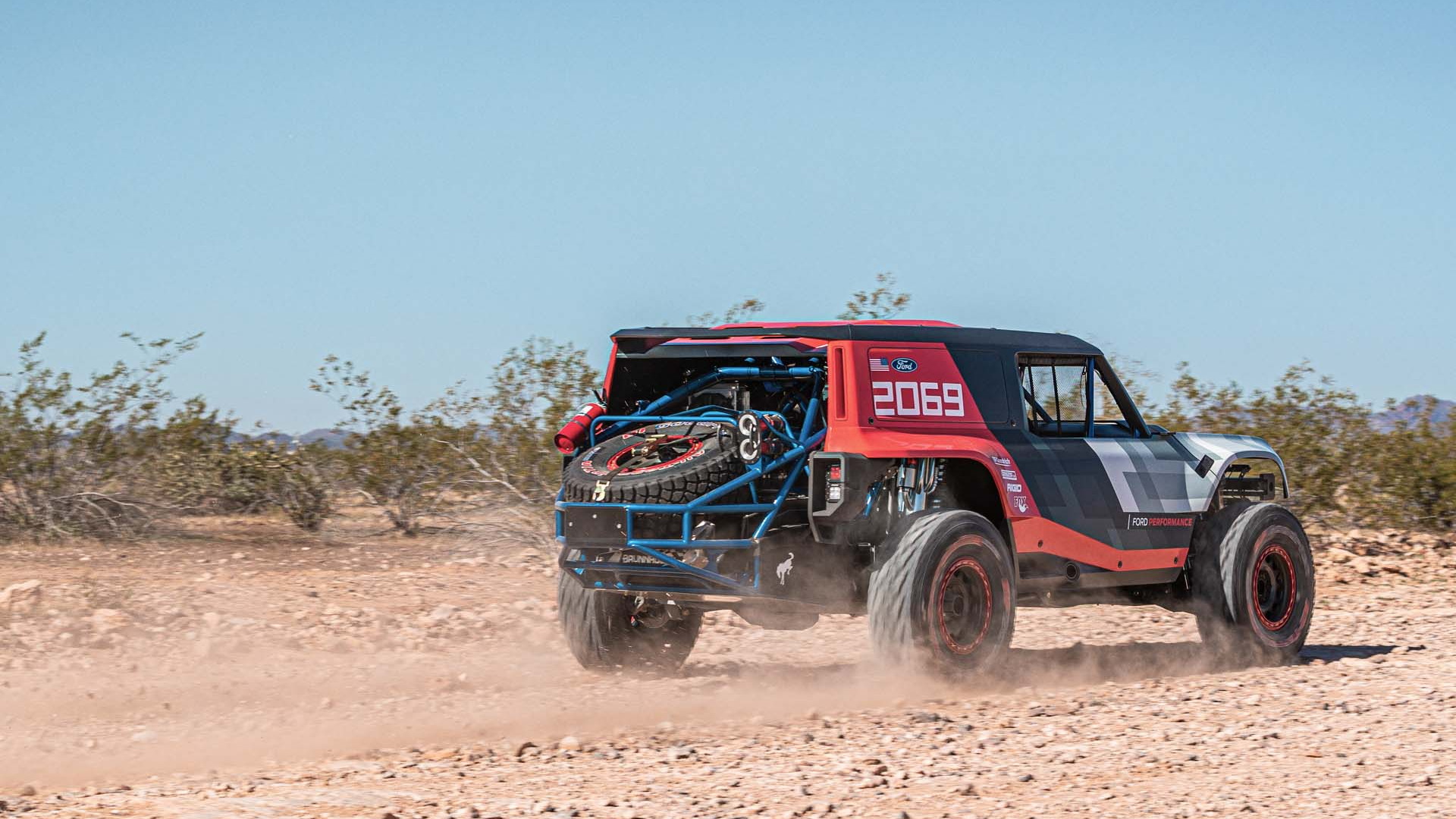 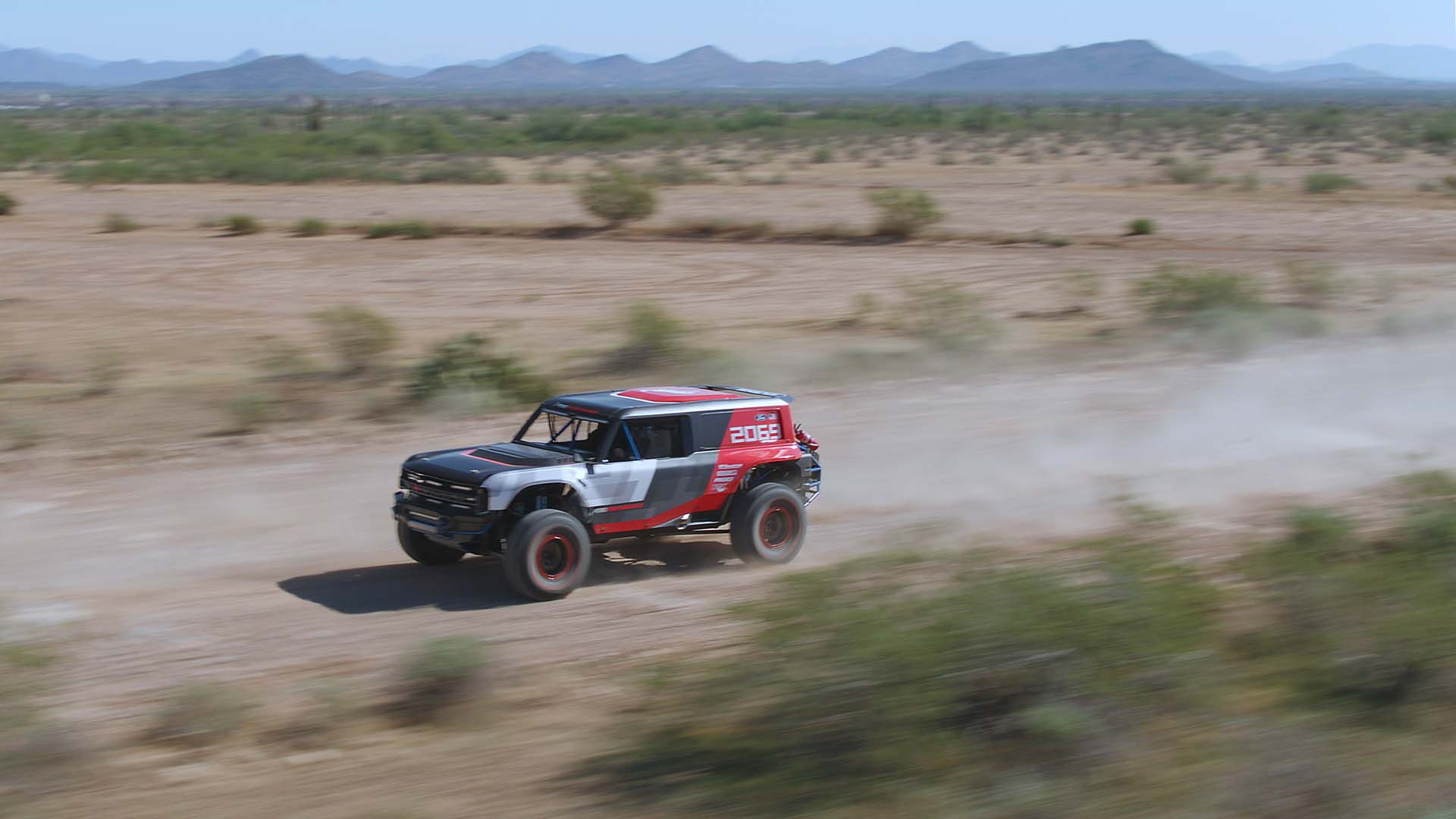 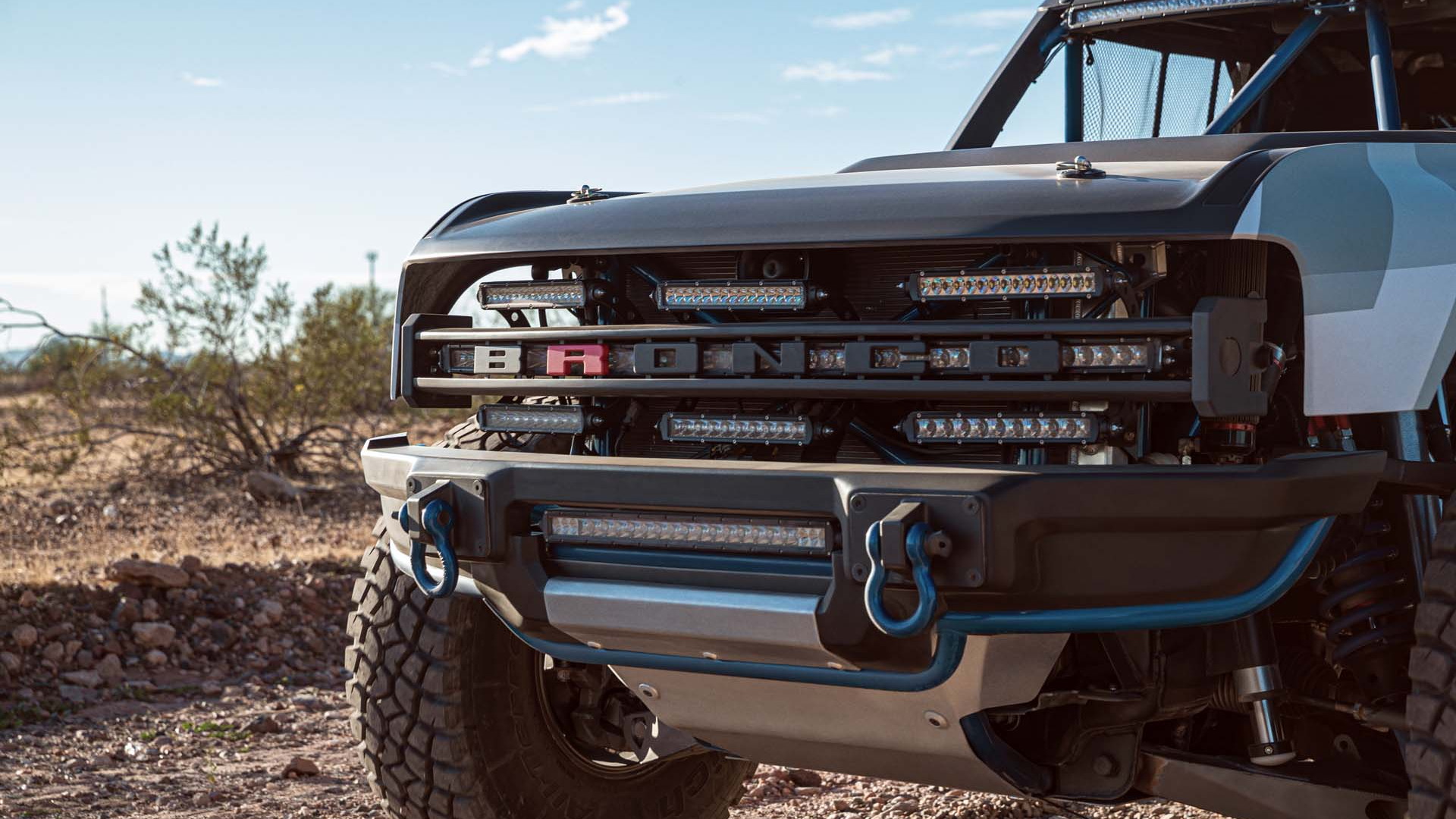 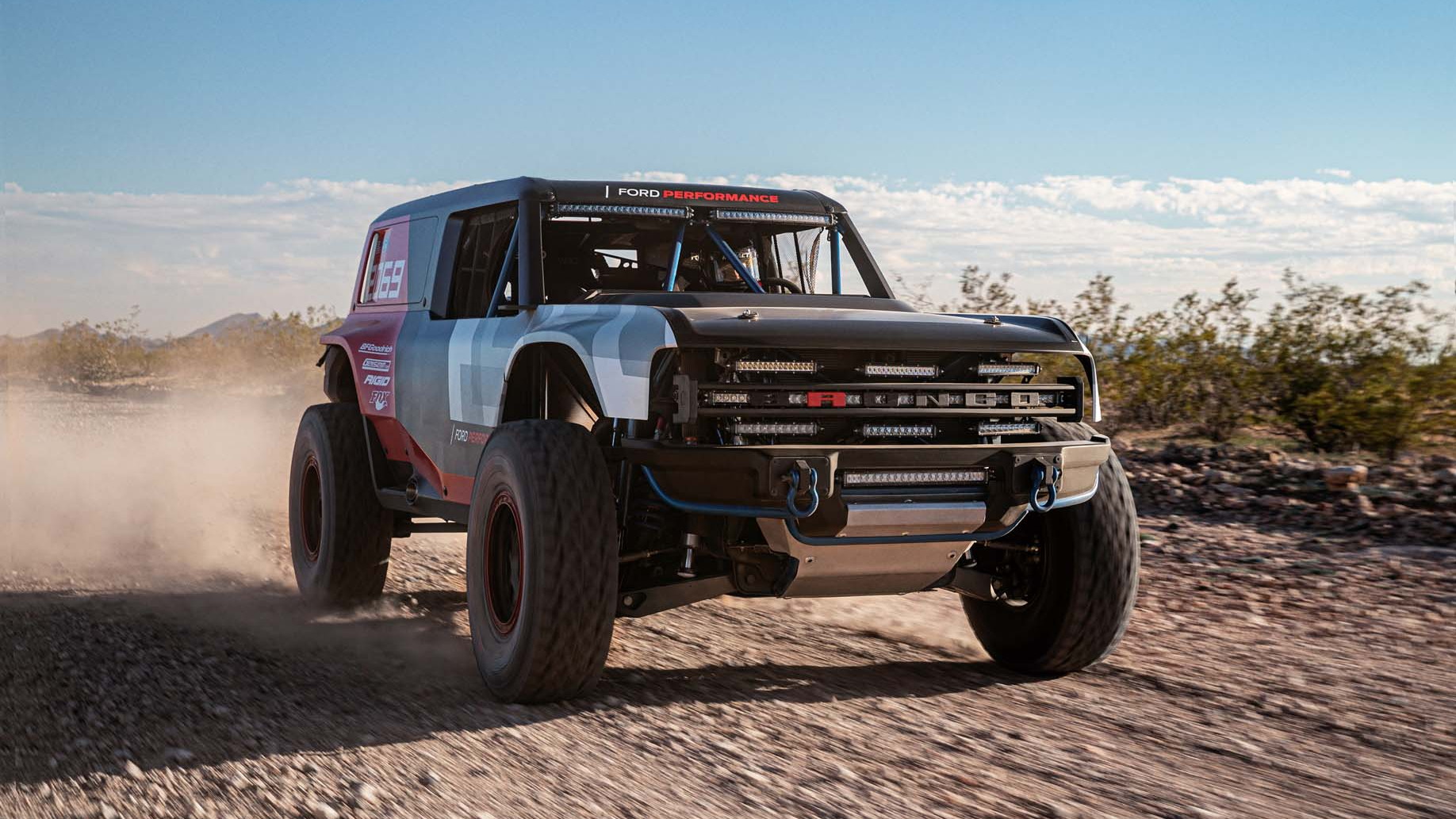 Ford's taking the new Bronco SUV racing in the desert.

Set to debut this spring, the 2021 Ford Bronco was previewed Monday by the Bronco R race prototype in the desert outside Las Vegas.

While the Bronco R was developed by the Ford Performance team, it previews the production Bronco due soon. The hoodline, roofline, and squared-off stance with straight angles reveal the shape of the 2021 Bronco, which is thankfully inspired by the first-gen Bronco.

A Ford spokesperson told Motor Authority the Bronco (and Bronco R) is the first vehicle to ride on the newly evolved T6 platform architecture making it a body-on-frame SUV like the Jeep Wrangler. It's an evolution of today's T6 platform that underpins the Everest SUV (not sold in the U.S.) and Ranger pickup truck with a five-link rear suspension setup.

Ford wouldn't discuss what's powering the Bronco R, but said its twin-turbo engine is "representative of what the production Bronco will offer." Ford builds 2.7- and 3.5-liter twin-turbo V-6s, both of which are offered in the F-150. The 2.7-liter twin-turbo V-6 is expected to power the Bronco, though a hotter Raptor model could potentially have the 3.5-liter stuffed under the hood some day.

The Bronco R's grille features the word "Bronco" spelled out in big, bold, capital letters (a feature likely to make the production model).

Designed to be race-ready, the Bronco R has composite body panels, a clamshell hood, extra wide stance for stability, and a roll cage.

Beefed up independent front suspension features 14 inches of travel with the production Bronco's five-link independent rear suspension, which has 18 inches of travel (likely not appearing on the production version). Custom Fox shocks handle all that jouncing, and by the looks of them, are built for massive punishment and heat management. All four corners have 17-inch beadlock-capable aluminum wheels with 37-inch BFGoodrich tires stuffed under the fenders. To help see in the dark, the Bronco R is equipped with 15 Rigid LED light bars because 14 just won't do.

The Bronco R race prototype's exterior features a livery that celebrates Rod Hall and Larry Minor's 1969 Baja 1000-winning Bronco design with red, white, and black with a splash of blue.

The Bronco R race prototype is headed to the Baja peninsula to run the Baja 1000 that starts Nov. 22.