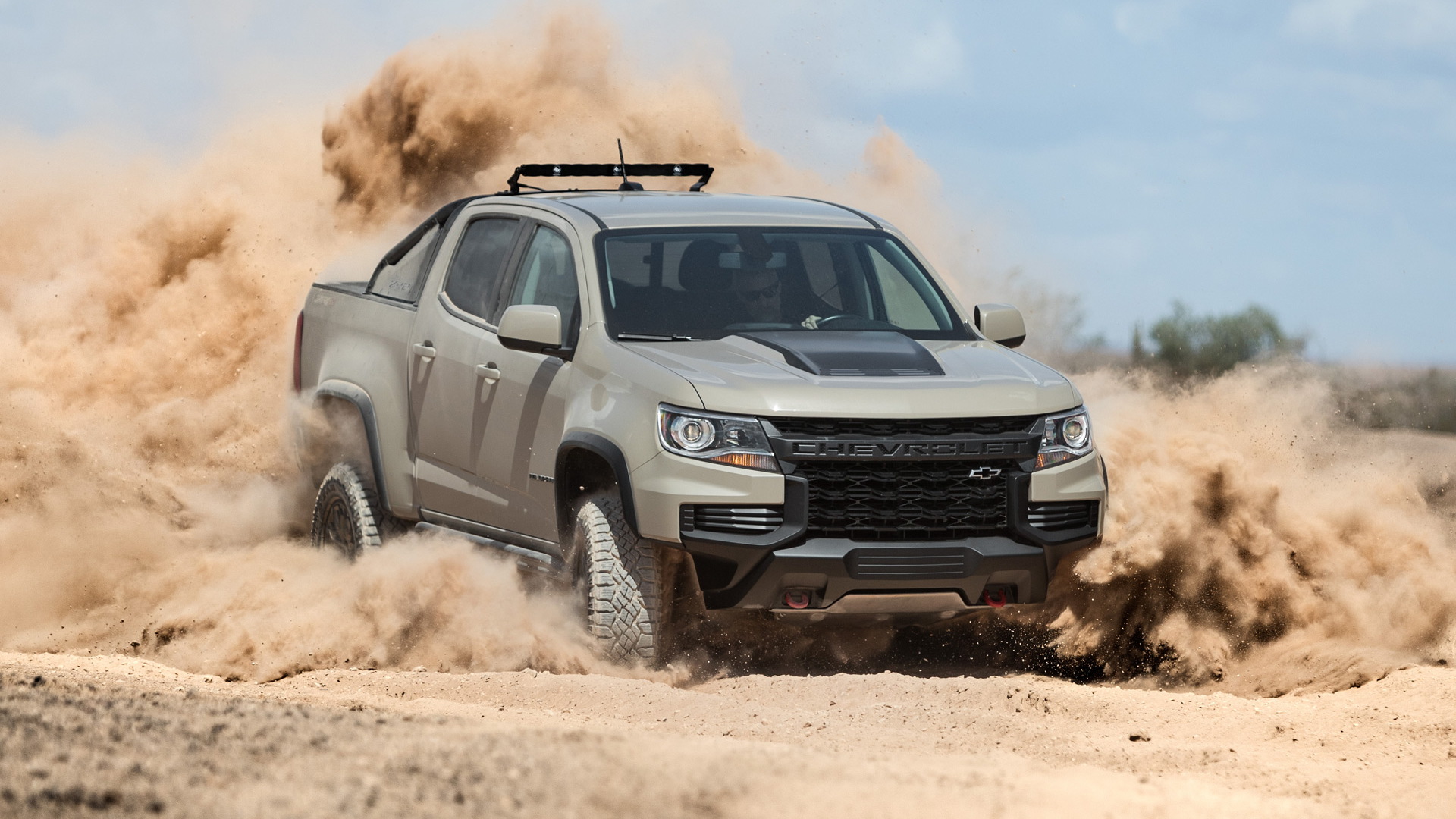 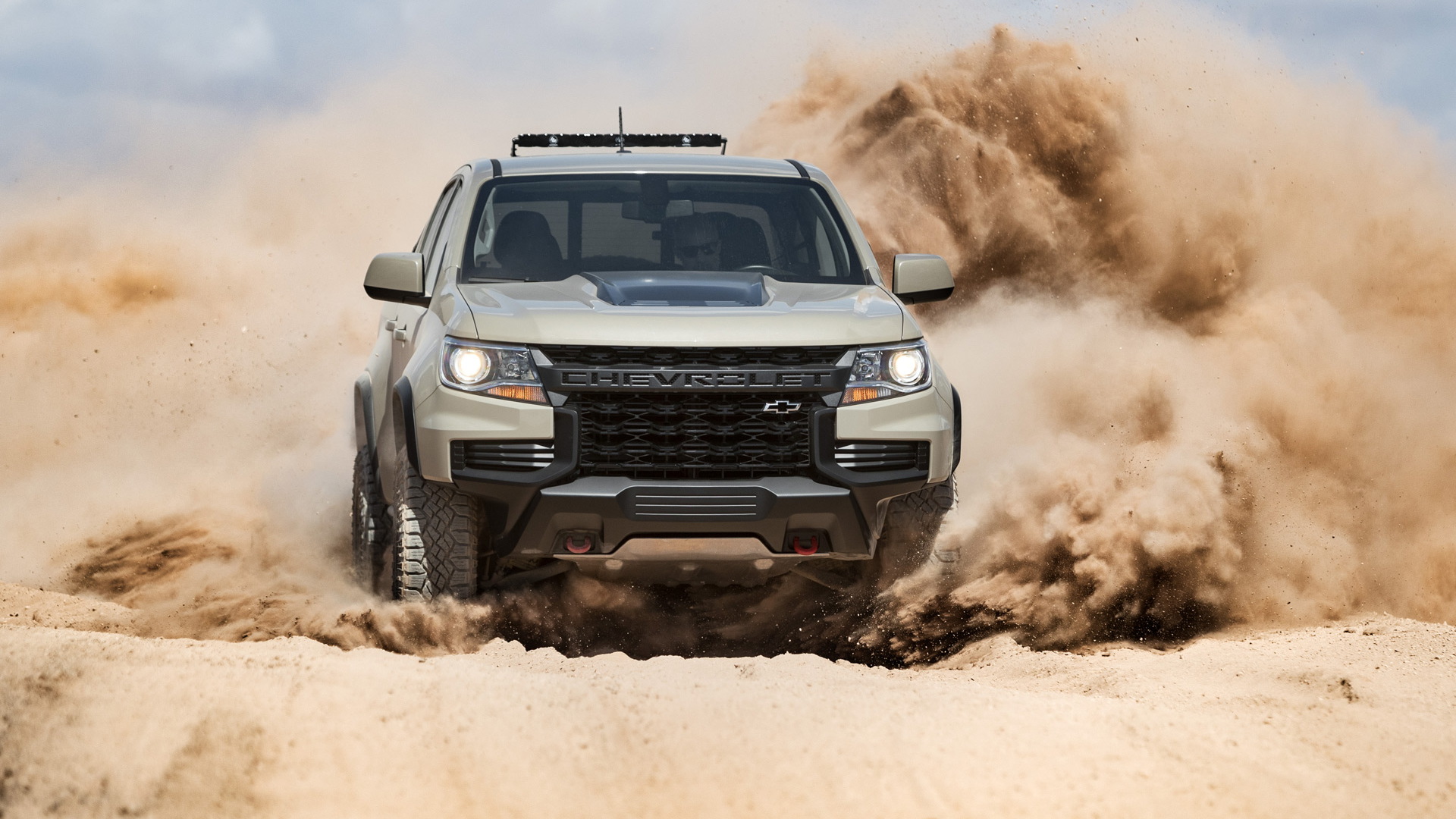 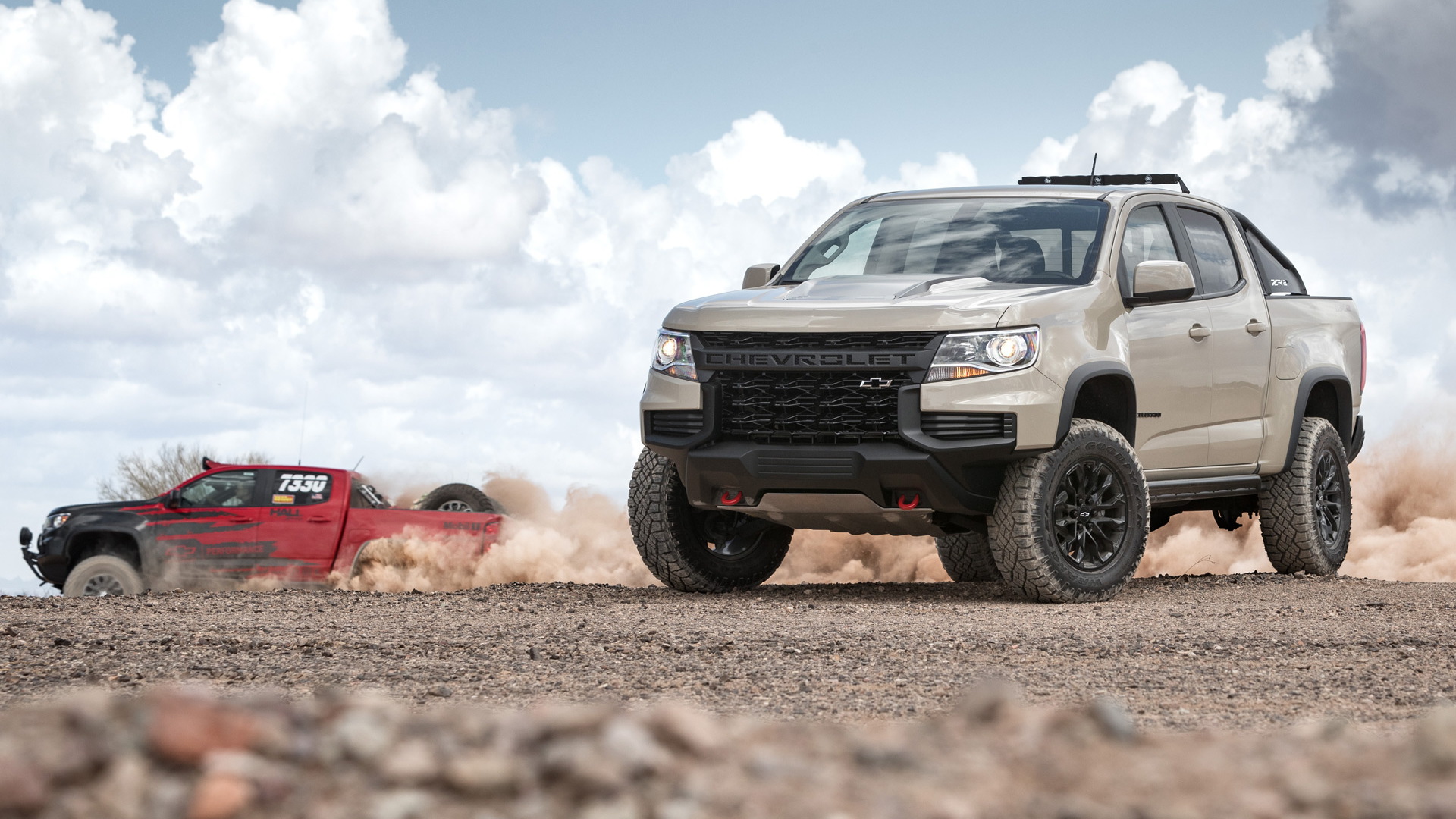 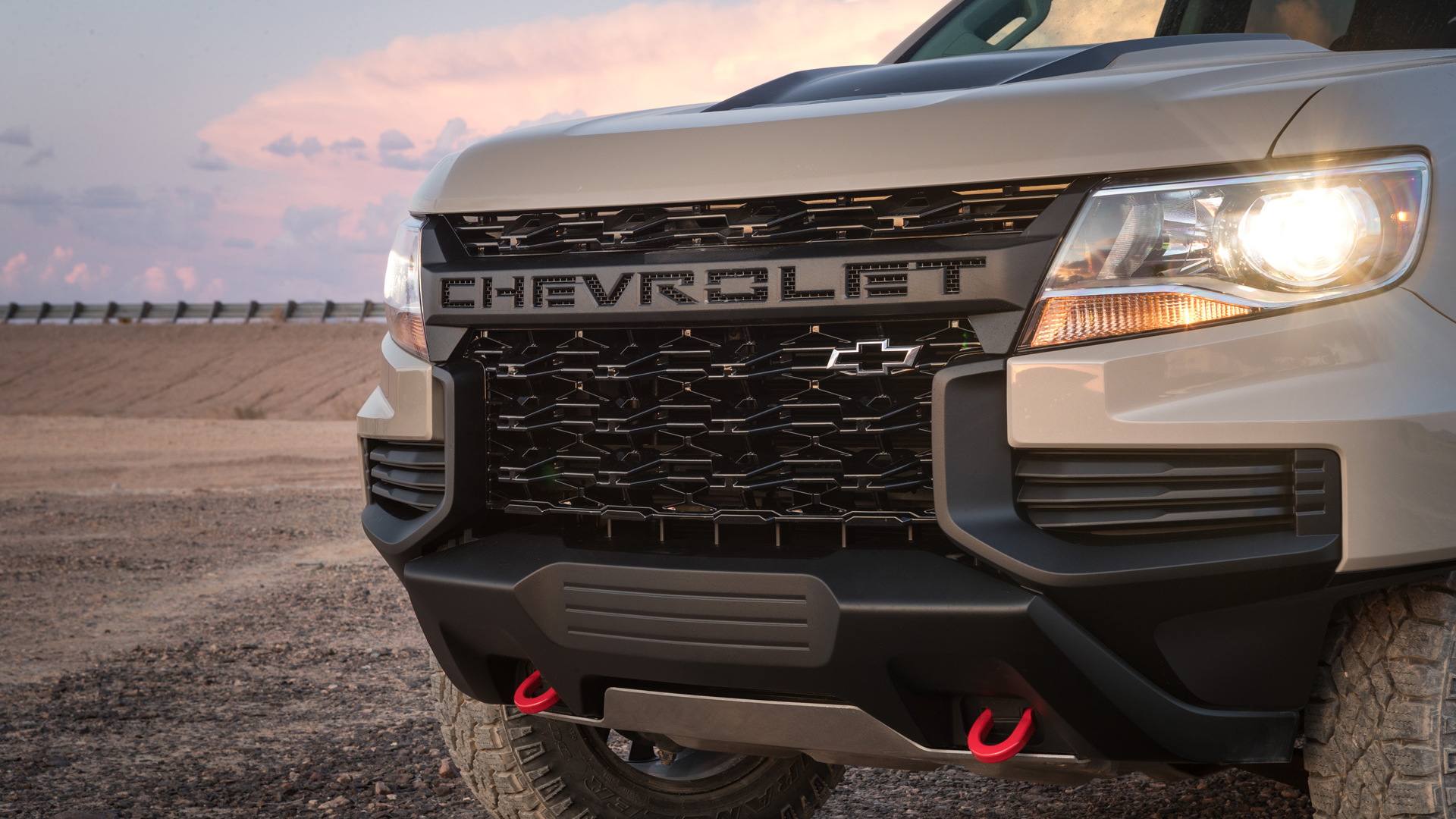 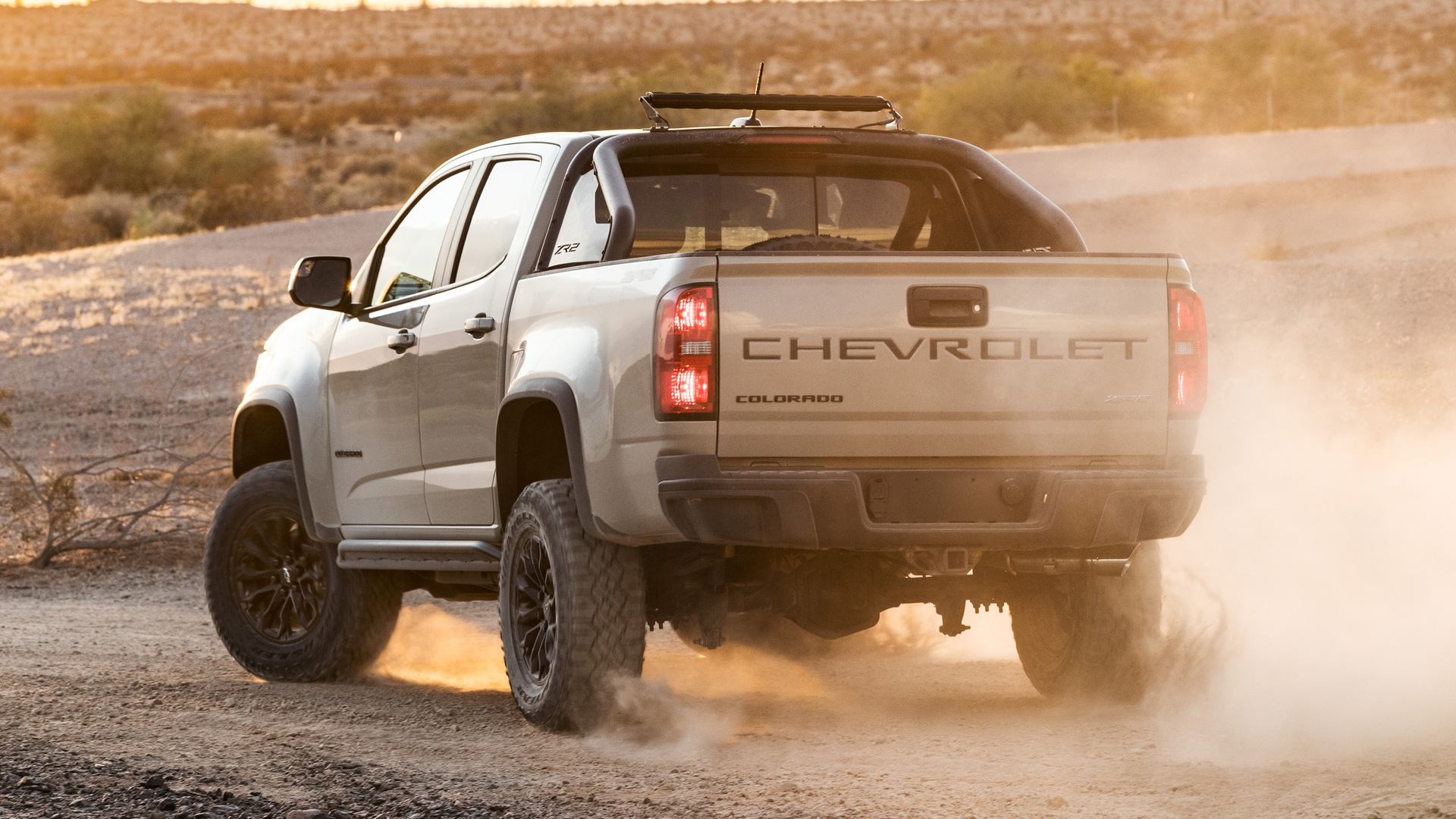 The Chevrolet Colorado is getting its mid-cycle refresh for the 2021 model year, a look we first saw with an appearance of the enthusiast-friendly ZR2 model at last November's SEMA aftermarket show in Las Vegas.

This refresh is a largely cosmetic affair, with exterior tweaks to further differentiate the trims and the off-road-spec Z71 and ZR2 models getting the most attention. A new Custom Special Edition is offered, and an 8.0-inch touchscreen becomes standard on all but the base WT model.

The ZR2's look is most changed, and it was clearly influenced by the range-topping Bison. A new, punched-out front bumper greatly expands the blackout elements of the ZR2's nose, and it's the only model to wear the "Chevrolet" grille crossbar rather than the bowtie found on other trims. It also now has red front tow hooks standard.

The model lineup consists of WT, LT, Z71, and ZR2, with the ZR2 Bison as an option package for the top-end off-roader. Every variant gets some front-end updates. The grille, lower bumper, and skid plates are all new, with the lower end WT and LT models denoted by new gold Chevrolet bowtie badges. The Z71 is set apart by a black bowtie, but otherwise looks identical up front. In addition, all models will now sport tailgates with "Chevrolet" embossed across the center, rather than the simple bowtie on previous years.

While the ZR2 offers plenty of off-road capability, the Bison package serves as the lineup's halo off-roader. The ZR2 Bison sold out so quickly for the 2019 model year that Chevrolet has alerted its up-fitting partner, AEV, that it should expect a larger allotment for 2020—perhaps as much as 25 percent more.

The 2021 Colorado goes into production later this month, and pricing should be available soon.

Correction: A previous version of this story misstated the outward vision from the 2021 Chevy Colorado. The hood line hasn't changed and driver visibility is identical to the 2020 version.