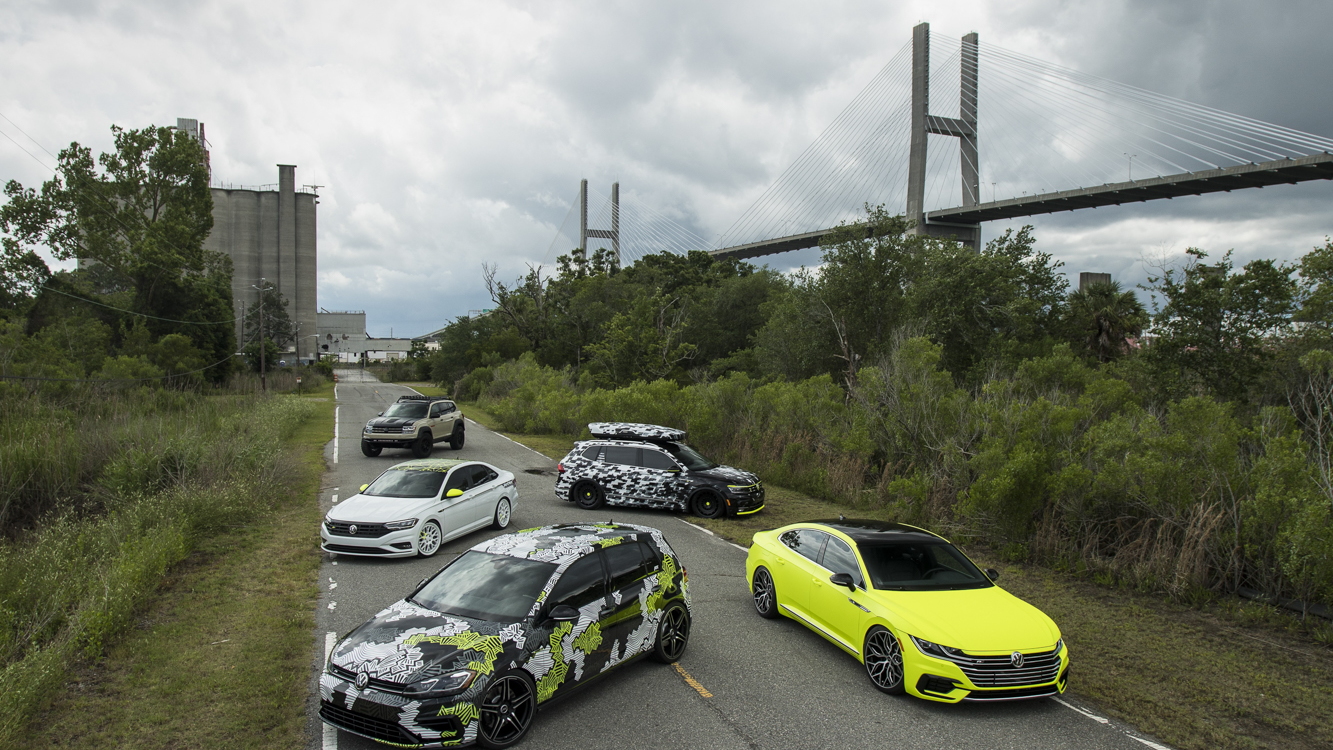 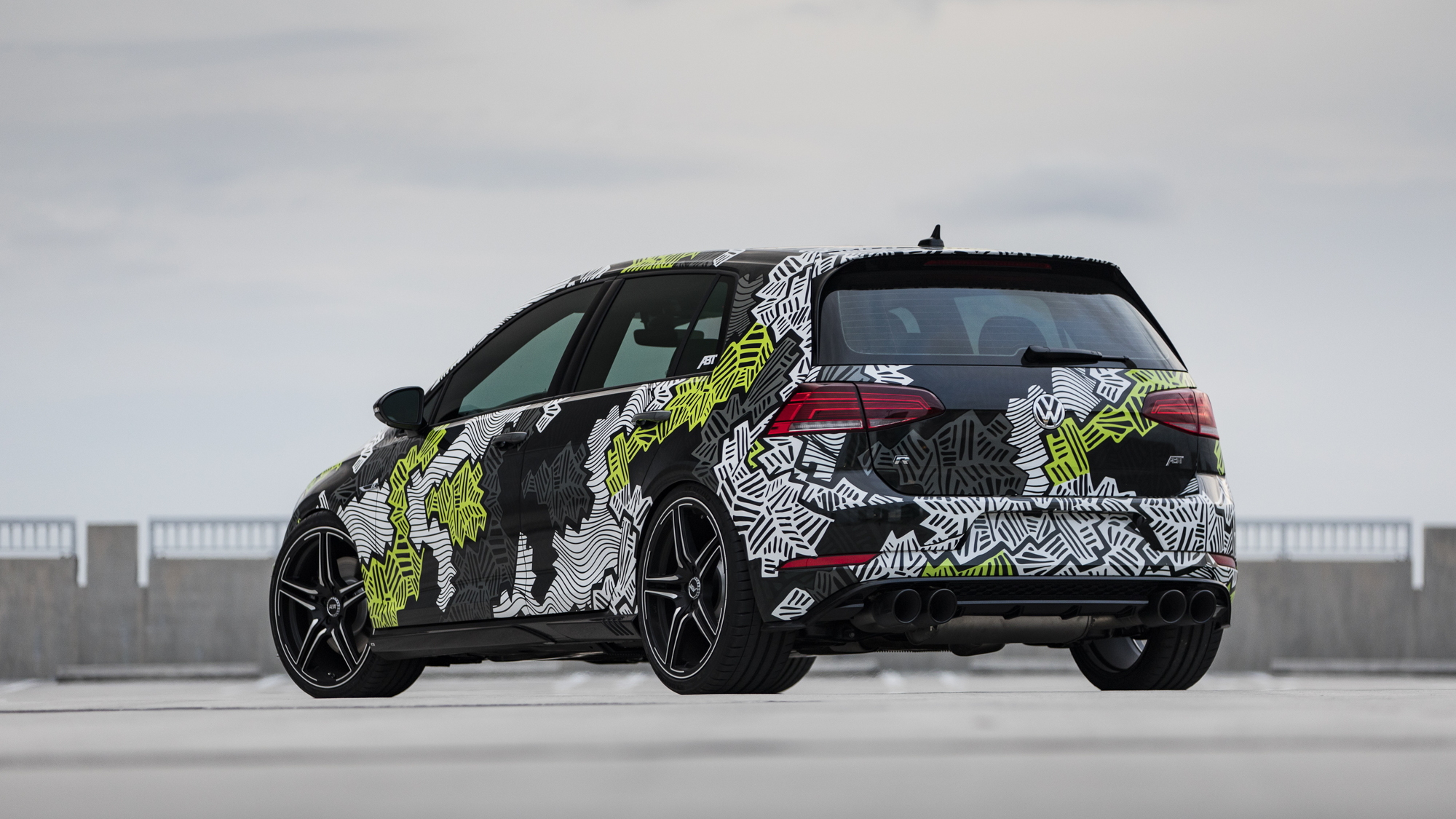 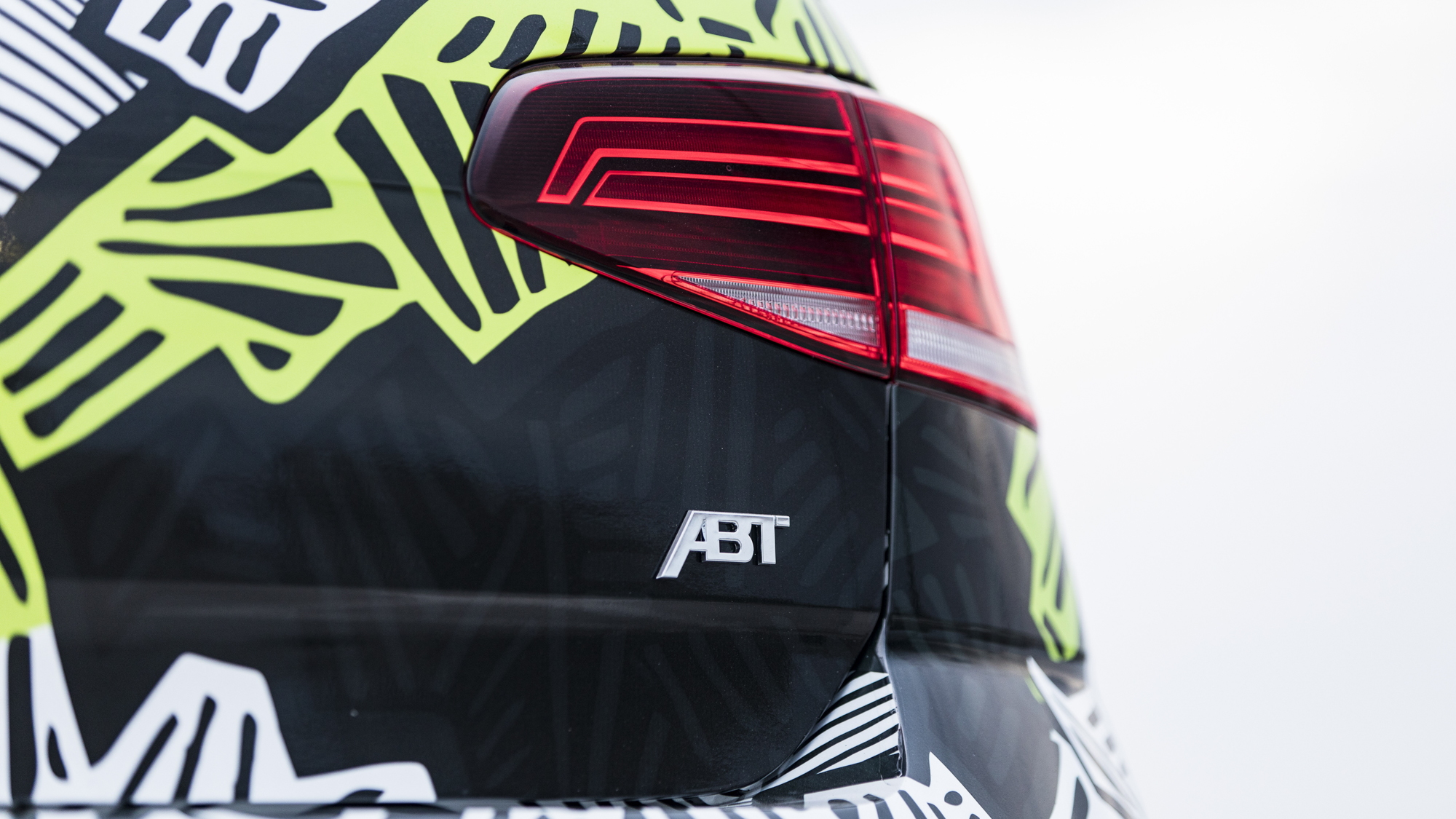 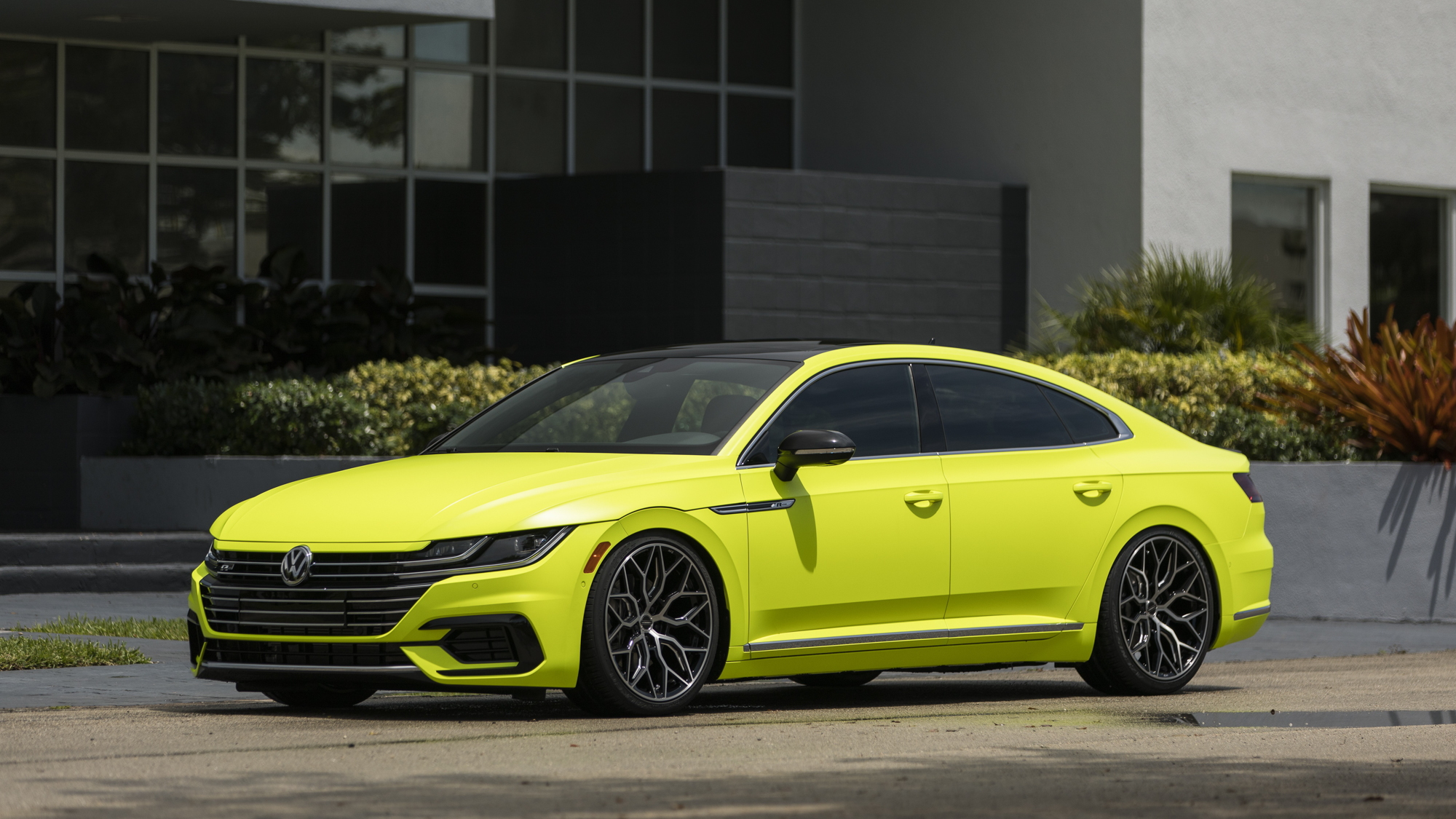 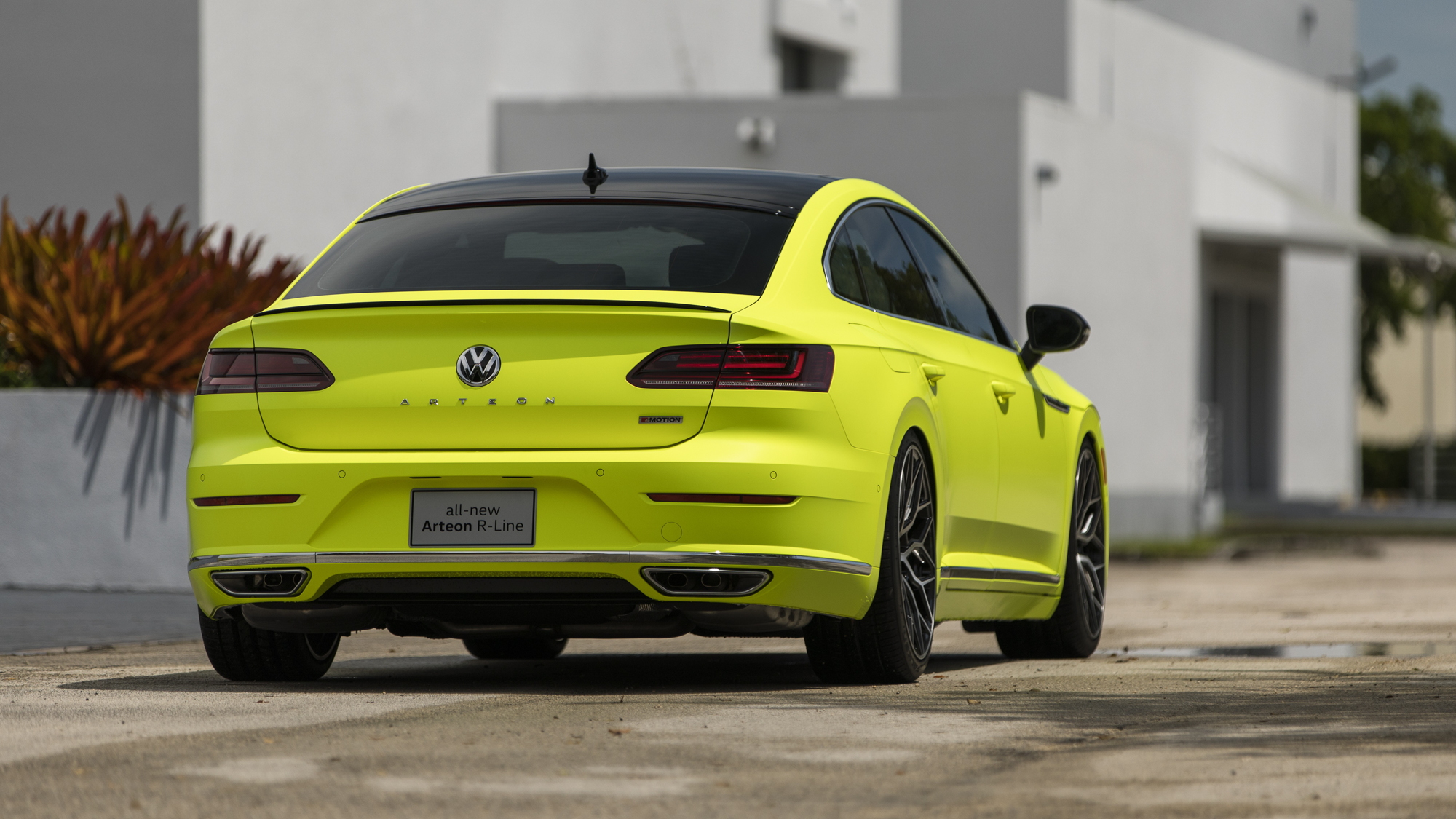 Volkswagen has prepared a traveling circus packed with five intriguing enthusiast-focused models. Each one has been prepared with a different sort of automotive fan in mind. These five models make up the bulk of VW's current lineup, and you can get your eyes on all of them if you live near one of six upcoming car shows here in the U.S.

First up is the 2018 Golf R Abstract concept. The name Abstract is plucked from the ABT Sportsline group that helped build the car. Sitting an inch lower than stock thanks to a set of H&R sport springs, this Golf R boasts more aggressive side skirts and a sweet set of 20-inch FR design wheels. The sound has also been upgraded as the car is fitted with a stainless quad-exhaust system finished off by black chrome four-inch exhaust tips. Inside, it has a carbon-fiber steering wheel, while the exterior is wrapped in a scheme designed to mimic the Wynwood Art District in Miami. That's where you'd find the ABT Sportsline offices here in North America.

This 2019 R-Line SoCal concept works off the lines of the new family sedan and cranks the style up a few notches. It features a set of fifteen52 wheels, while the overall stance is set perfectly thanks to the KW prototype ST XTA Coil Over suspension system, which lowers the Jetta by three inches. Volkswagen says there's more in store for this car as the year progresses. That's PR's way of saying this car either wasn't done on time, or the mod squad in charge didn't have parts ready for the new Jetta. Regardless, the car looks cool as it currently sits.

Our favorite of this fun-five lineup is the 2018 Tiguan R-Line Aero concept. The R-Line badging was the inspiration for the unique camo wrap found on this slammed crossover. It rides quite low thanks to an air suspension installed by Air Lift Performance. The kit comes with front and rear struts, and it can lower the Tiguan by up to 4.8 inches. A Thule Motion XT Alpine rooftop carrier sits on a Thule AeroBlade Edge roof rack system up top. To complete the style and stance, Rotiform supplied 20-inch Monoblock CCV wheels are finished in matte black. The package works quite well, and this vehicle perfectly sums up modern VW modding done right.

Volkswagen's new Arteon fastback is also getting in on the fun. The 2019 Arteon R-Line Highlight concept is finished in a rather bright fluorescent yellow wrap and paired with dark Vossen 20x9.5-inch wheels. This Arteon concept sits almost three inches closer to the ground by way of a prototype coil-over suspension setup from H&R Springs.

Finally, we have a ride with a bit more function but still plenty of added form. This is the 2018 Atlas Tanner Foust SEMA concept. It's an Atlas set up for overlanding, which is long-term off-roading. A set of larger wheels and tires are just the beginning. Volkswagen has also added revised bumpers to improve the approach and departure angles, as well as light bars on the front bumper and roof to illuminate the trail at night. Inside, VW installed plaid seats as a great nod to the company's heritage.

If you're interested in seeing any of these machines in the metal, you'll need to make it to one of six upcoming car shows. They are appearing at seven shows, but the first has already passed. It was the SOWO: The European Experience in Savannah, Georgia, and it happened May 17-20.

Next is the Euro Hangar event in Holland, Michigan on June 22-23, followed by Waterfest in Atco, New Jersey, July 21-22. Then it's on to Wolfsgart in Burlington, Vermont, August 3-5.

From there it's off to VAG fair in York, Pennsylvania, August 11-12. On September 2 they will appear at the SoCal Big Euro show in San Diego. Finally, the Woodburn, Oregon-based Pacific Waterland show takes place on September 9.

Find a show near you and check out these cool machines. Then let's work on convincing Volkswagen to put them all into production as limited-run special-edition models.