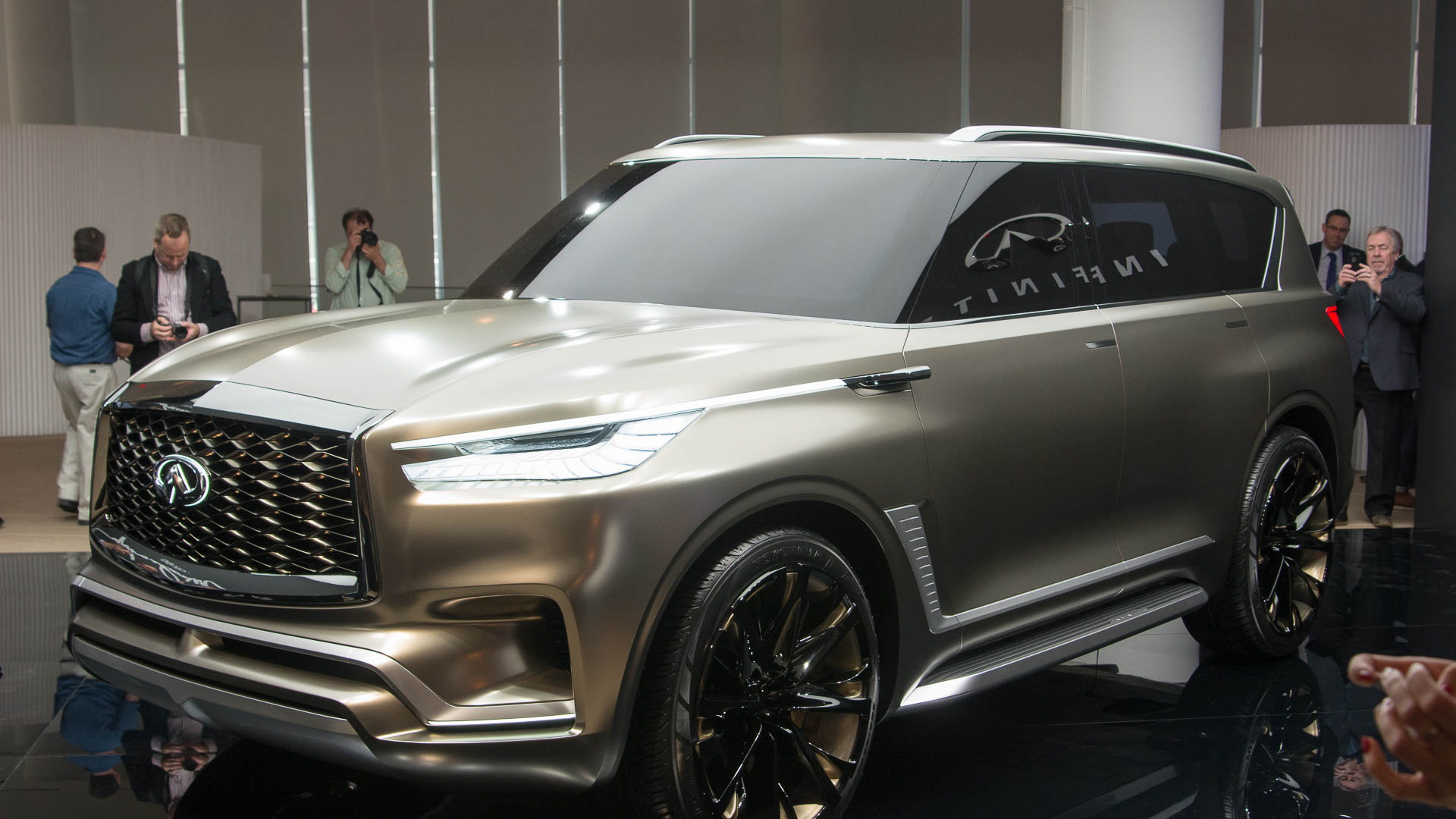 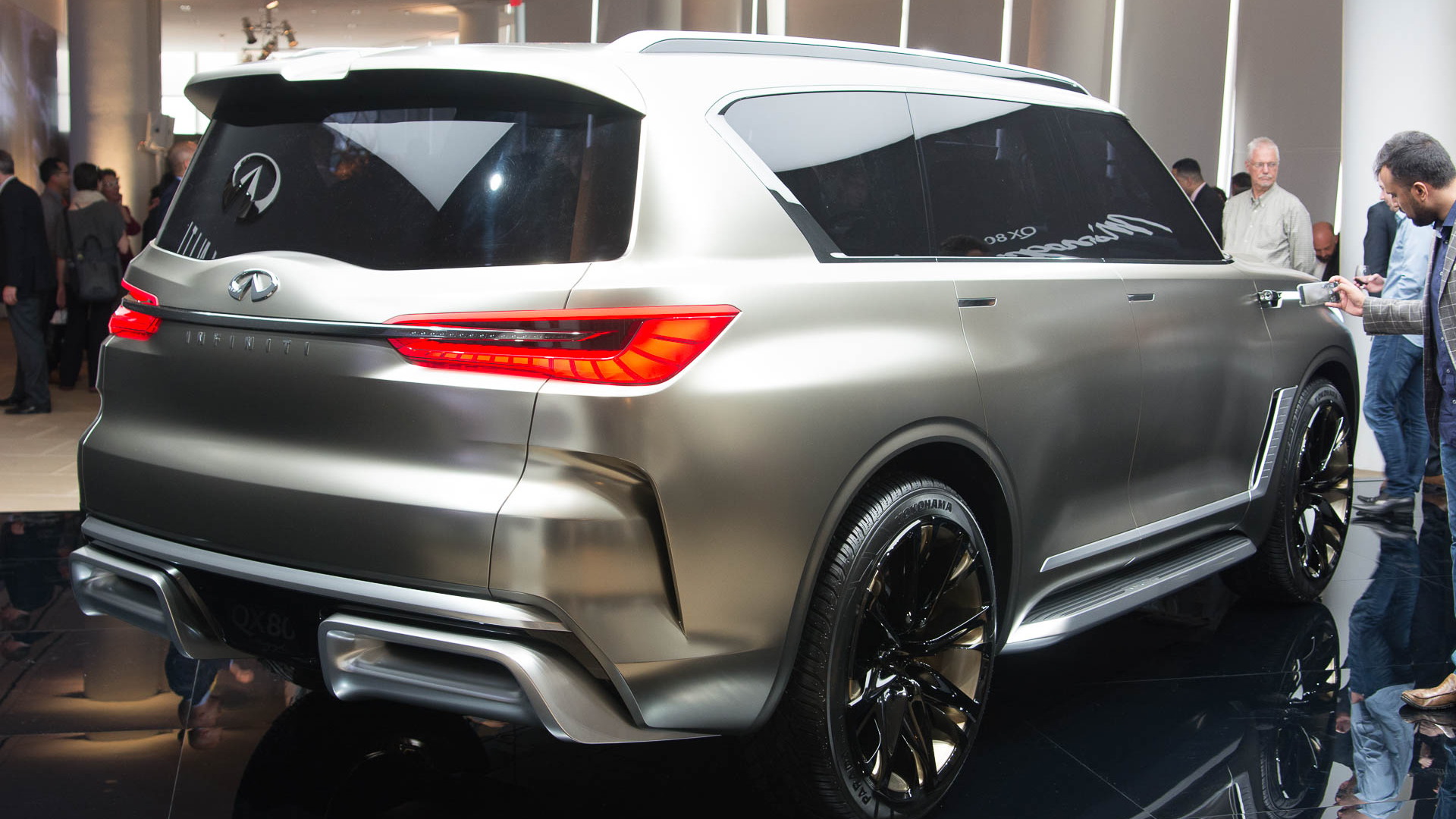 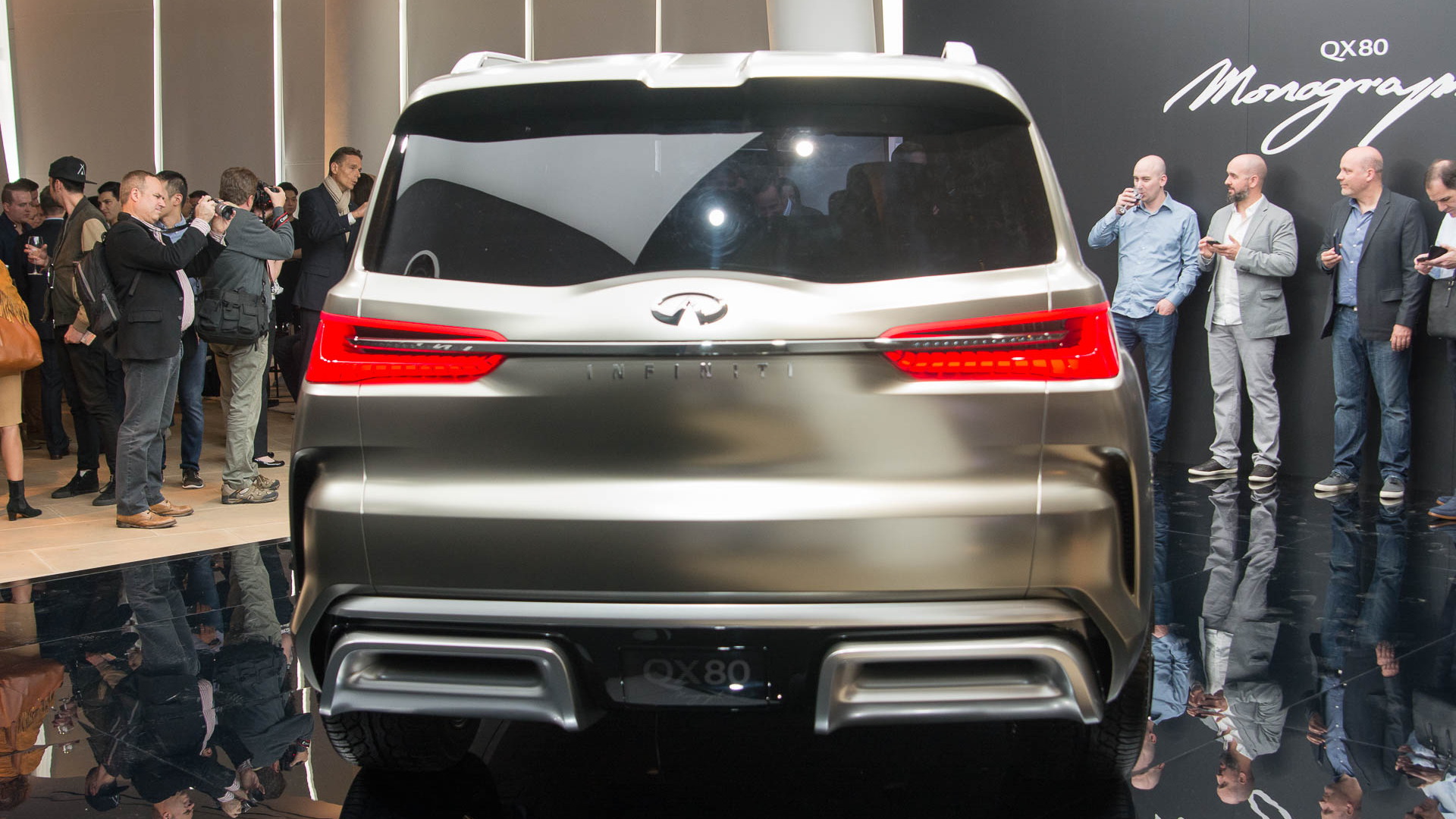 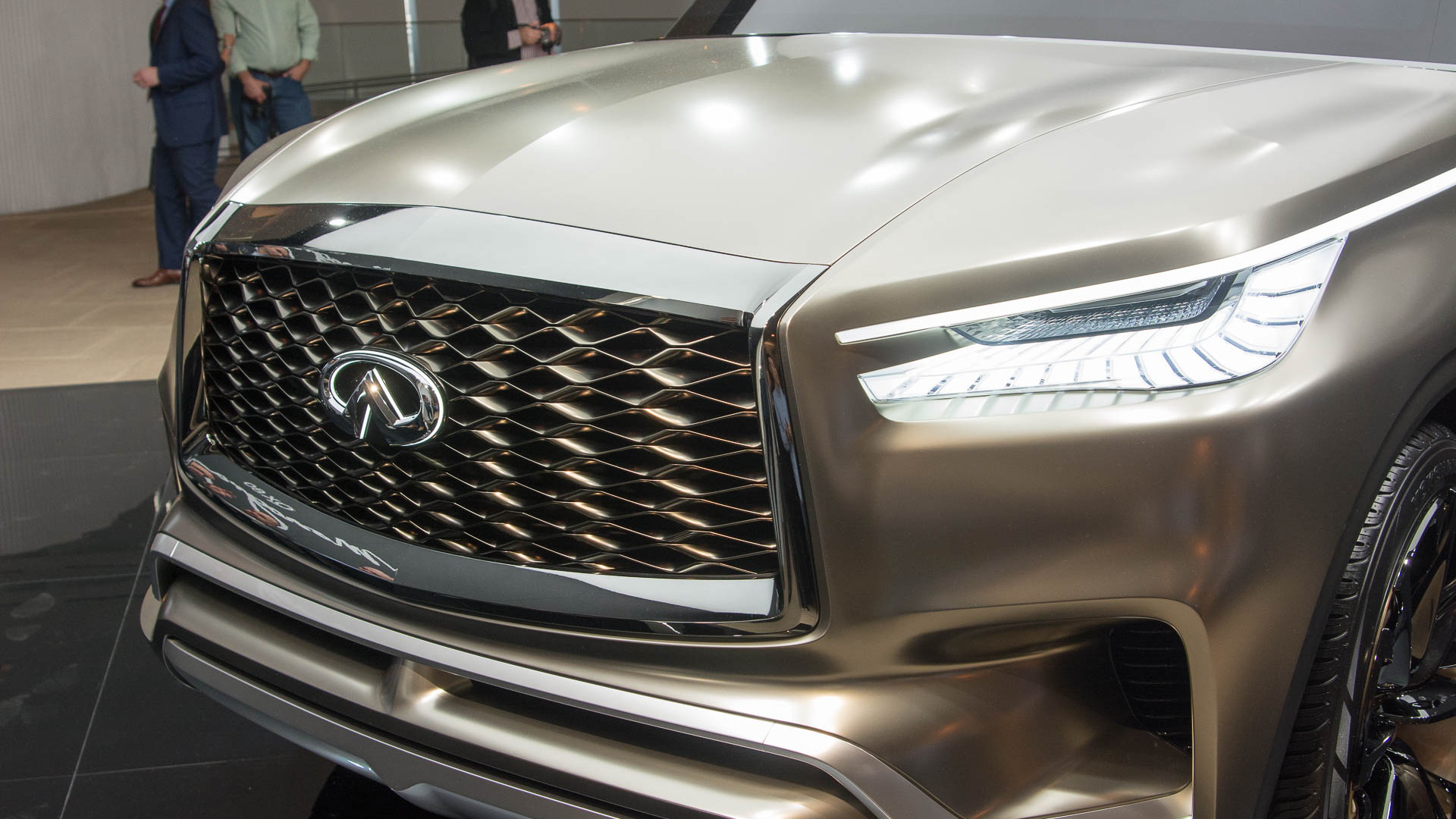 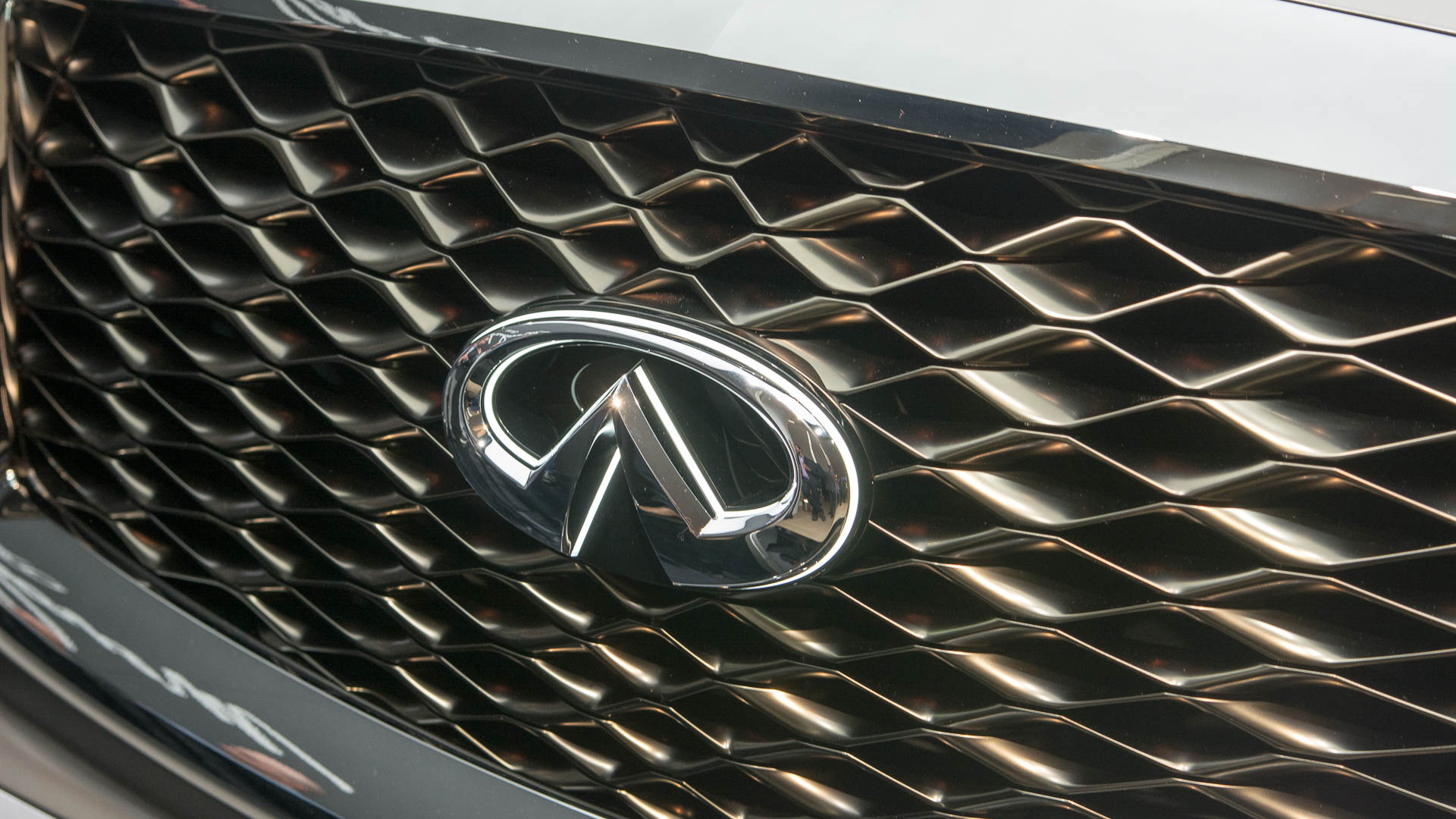 Gone is the idea that a luxury brand's flagship for design and tech must be a sedan. Infiniti's full-gainer into the design deep-end with its QX80 Monograph concept should be proof enough of that.

It made its debut on Wednesday at the 2017 New York auto show and is a preview of the design of the next-generation QX80. Recall, the current QX80 debuted as the QX56 in 2010.

Infiniti describes the QX80 Monograph as an exterior design study—Infiniti's words, not ours—for the next QX80, and possibly other SUVs from the brand. The look is a chunkier, more muscular take on the new SUV design language that we first saw on the QX Sport Inspiration concept unveiled at the 2016 Beijing auto show and followed up on the QX50 concept at January’s 2017 Detroit auto show.

A better name for the latest concept would probably be QX80 Monolith, because the vehicle is a behemoth at over five meters in length, over two meters in width, and over two meters in height (when you include the roof rails). The wheels are equally massive, measuring 24 inches in diameter. One interesting element is that the outer edges of the wheels overlap the tires, making them look even larger.

We see signature headlight elements (Infiniti calls them Human Eye headlights), lower body styling, and some grille work in the future for coming Infiniti SUVs. We'll take a flyer that the slim mirrors, ginormous wheels, and shaved handles don't make it into production. What's less clear is if the whole floating roof will make it onto the next QX80. Given the current design trends among other SUVs it'd be hard to imagine that Infiniti would skip the look—but the blacked-out windshield pillars would be a bold, bold flavor from Infiniti. One we like.

Infiniti hasn’t revealed the interior of the concept but says brushed aluminum is used for the door sills. Infiniti says there are also internal vents aft of the front and rear wheels that could perform a valuable aerodynamic function, evacuating turbulent and drag-inducing air from the wheel arches.

Given that this is an exterior design study, Infiniti is also quiet on powertrain details. The 5.6-liter V-8 currently planted in the QX80 has been given a new lease on life, thanks to the Nissan Titan XD, so seeing a V-8-powered next-gen QX80 isn't out of the realm of possibilities.

Little is actually known about Infiniti’s next QX80. The vehicle is expected in the next year or two and will likely ride on an updated version of the rugged body-on-frame platform of the current model. Nissan will also spawn a new Patrol, the current version of which is sold here as the Armada, from the platform, and with Mitsubishi now also in the alliance between Renault and Nissan, there’s a good chance that a new Montero (a Pajero in other markets) is also added to the development mix.

For more coverage of the N.Y. auto show, head over to our dedicated hub.