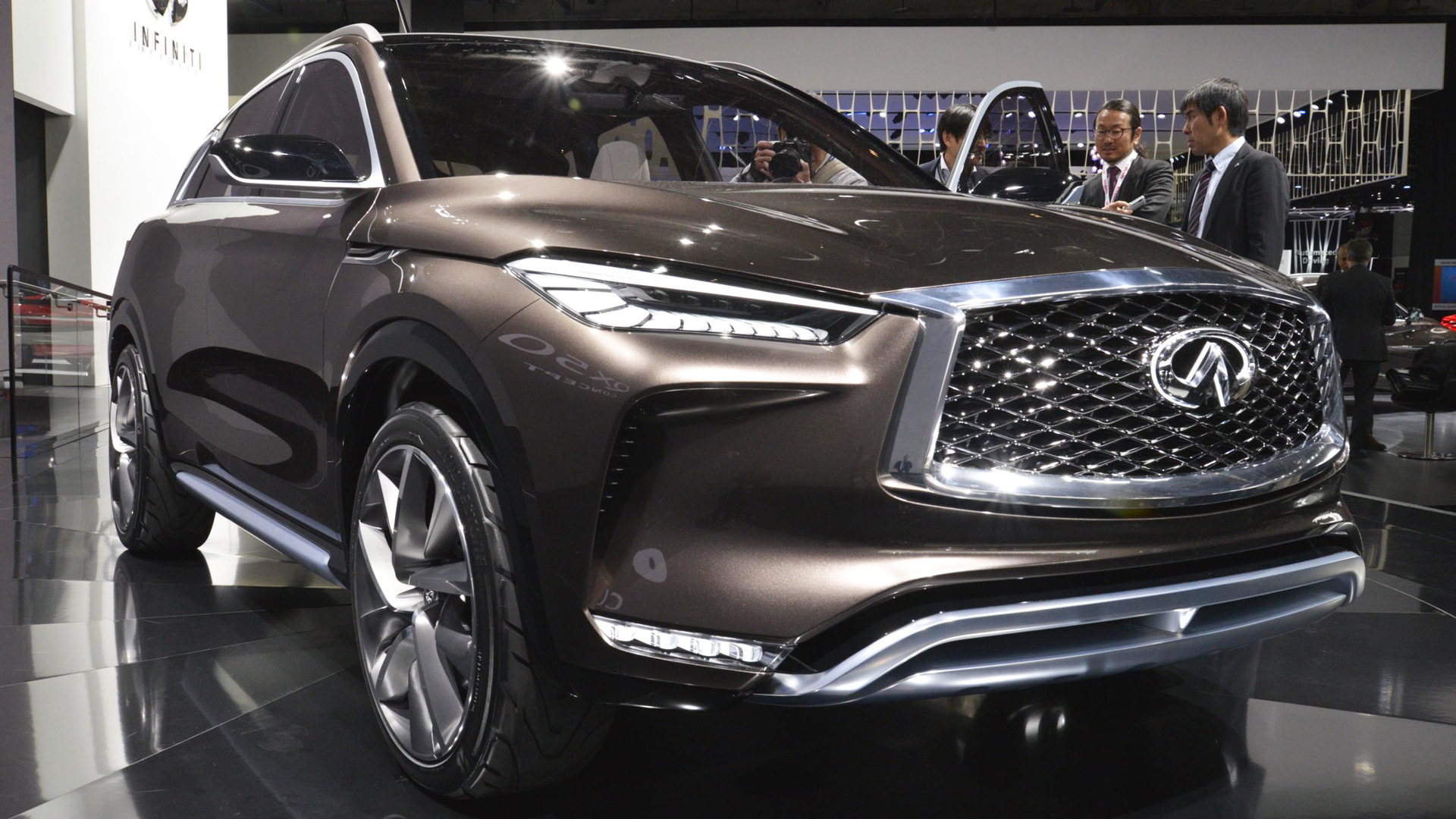 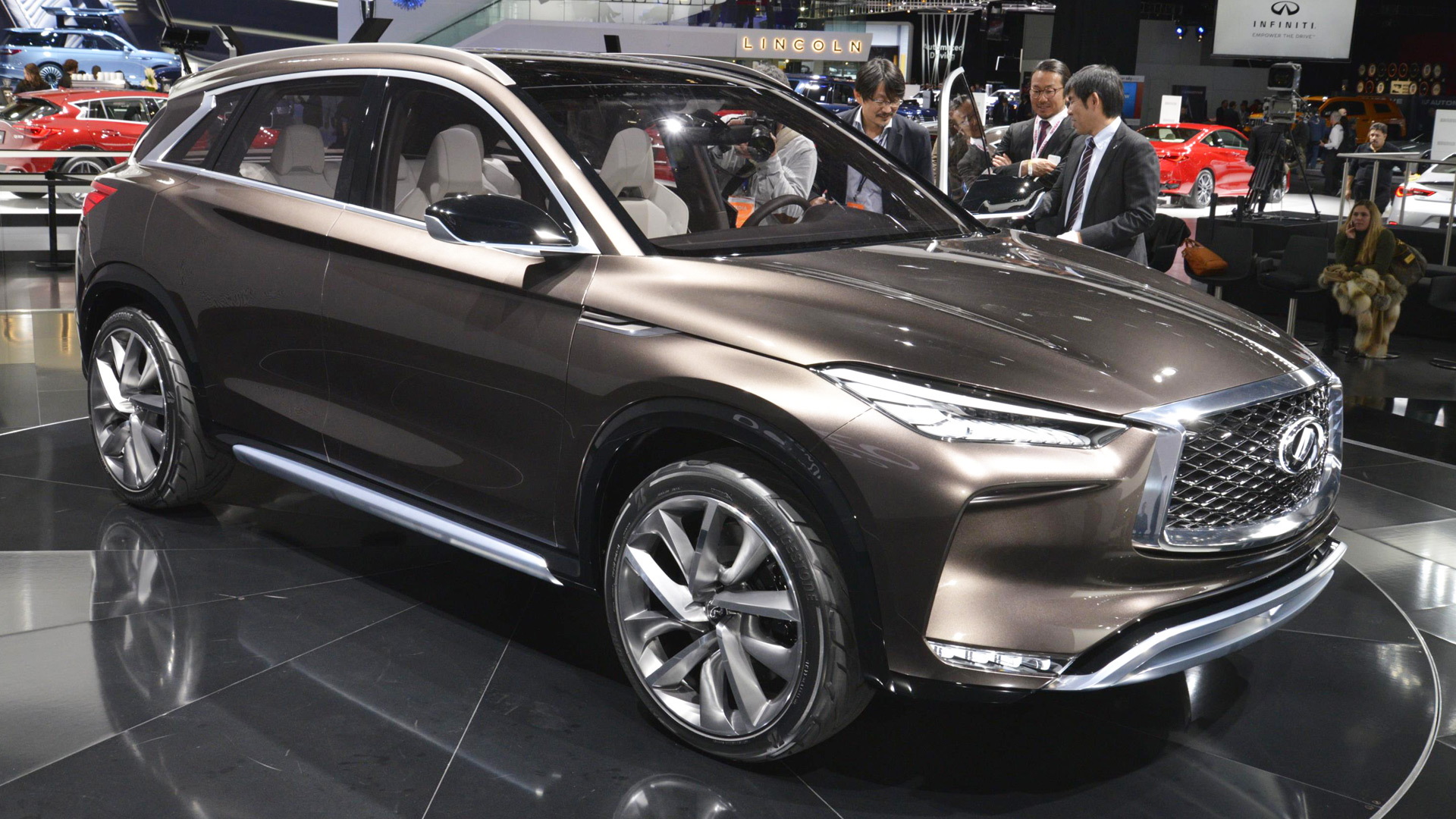 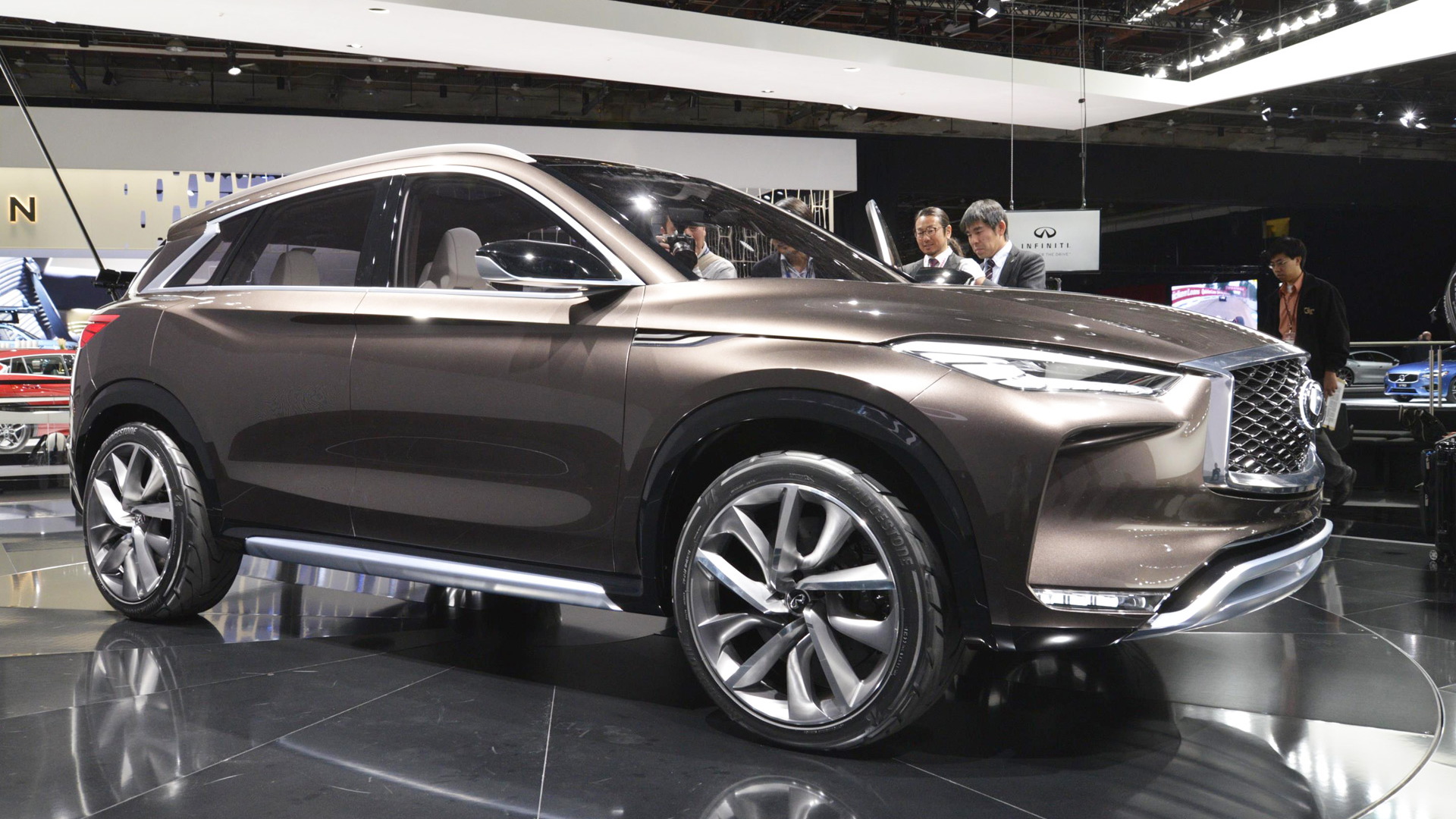 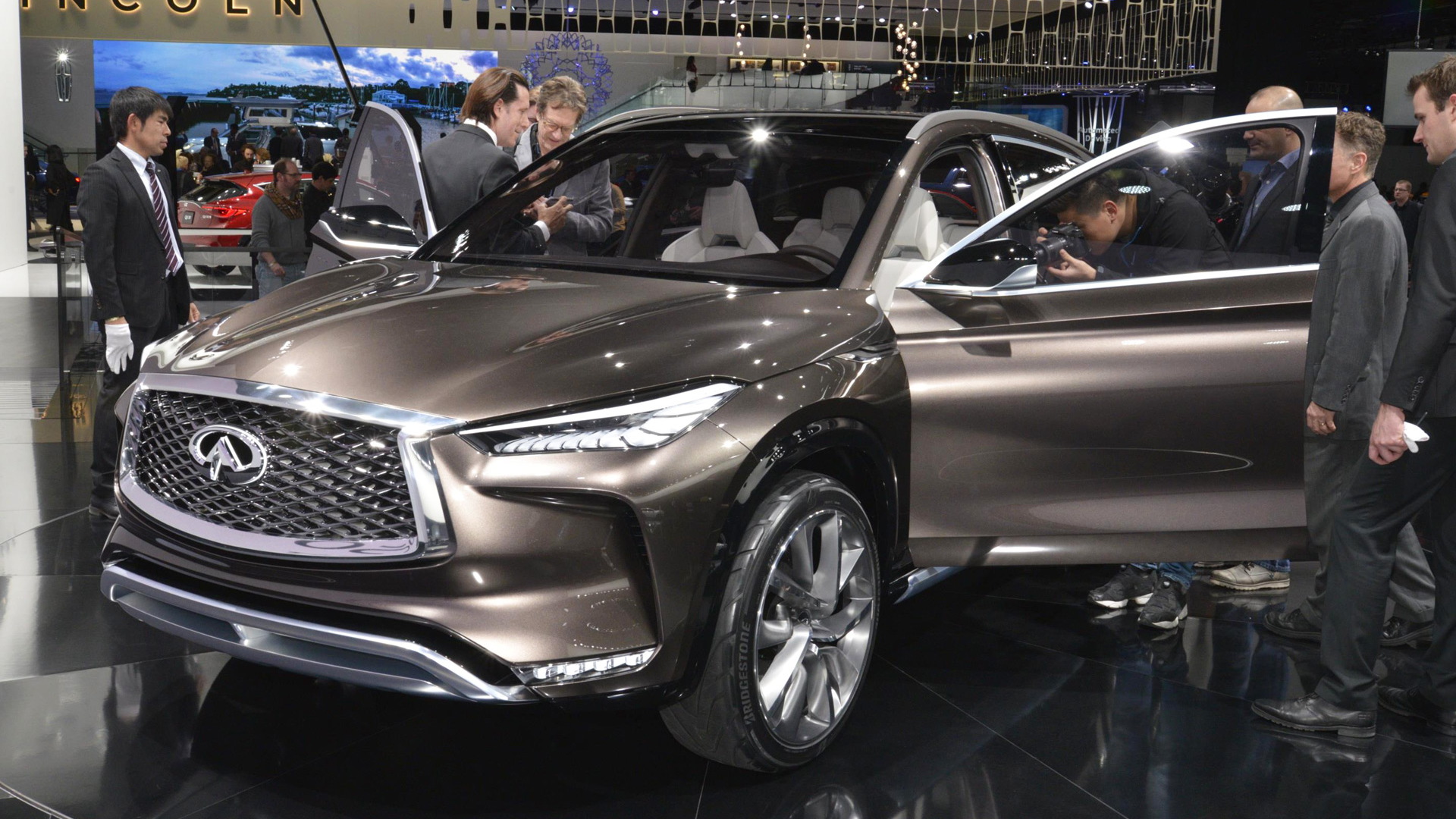 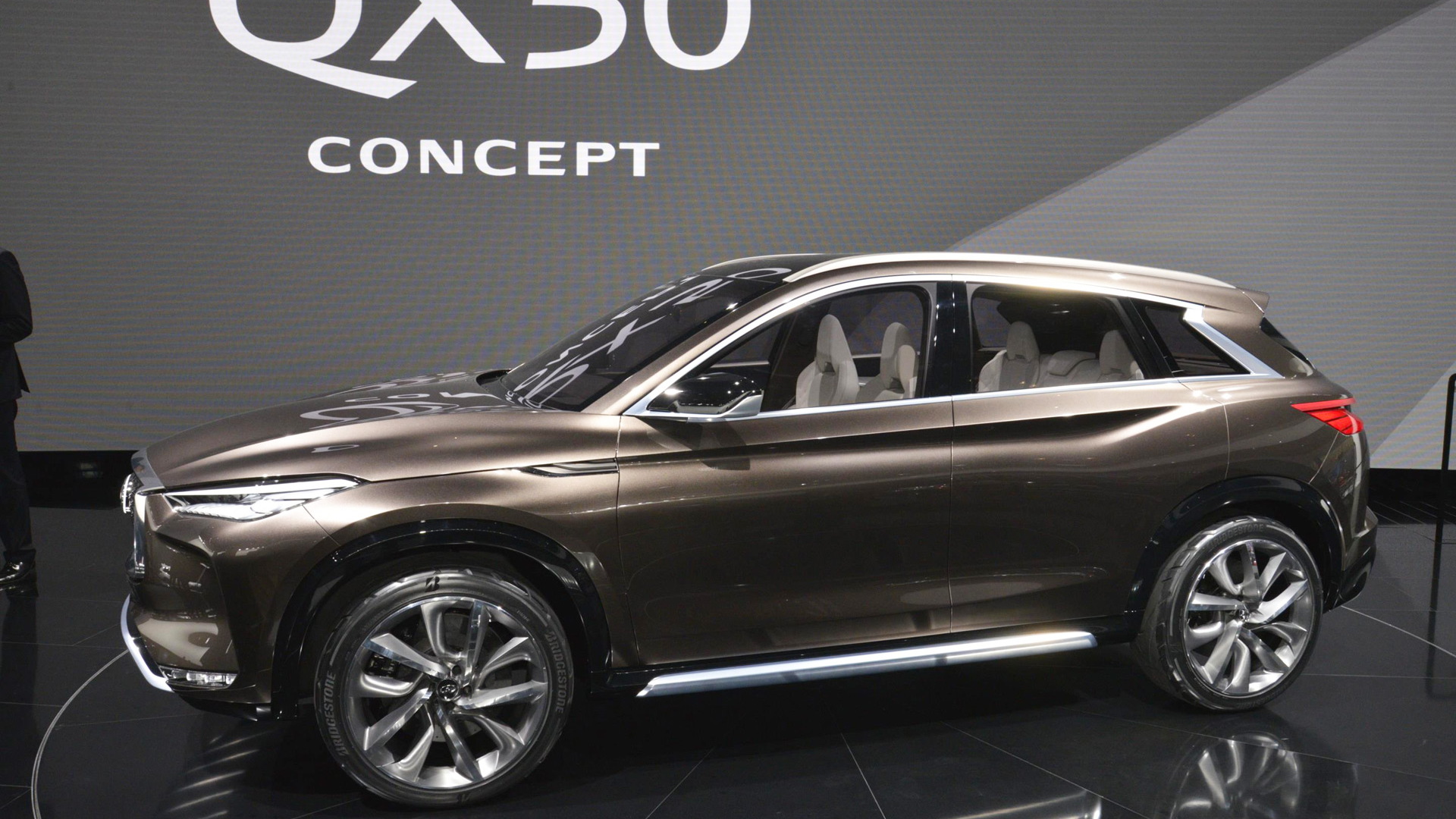 Given the size of the concept, at 181 inches in length and with a wheelbase of 110 in, we knew all along it was actually a thinly-veiled preview of the next-generation QX50. Now Infiniti has confirmed that thinking with the reveal of the almost identical QX50 concept.

Unveiled on Monday at the 2017 Detroit auto show, the QX50 concept not only previews the design of the next QX50, it also previews some of the upcoming vehicle’s technologies. These include Nissan and Infiniti’s ProPilot driver assist feature and VC-Turbo variable compression engine.

The QX50 concept indicates that, at least stylistically, the redesigned QX50 will diverge significantly by sporting a sleek sexy design that contrasts with the somewhat plain looking current model. Infiniti calls the new look Powerful Elegance.

The interior is much plusher than we’re used to seeing in Infiniti vehicles. The dashboard controls are angled towards the driver and most of the surfaces are lined in cut and sewn leather and accented with real wood and metal elements. On the seats there is “dot quilting” which Infiniti says was inspired by classic buttoned-leather sofas.

In the center of the dash is a wide touchscreen display. As well as displaying navigation and infotainment features, the screen also presents information related to the car’s ProPilot driver assist feature. It can even show a graphic of the VC-Turbo engine shifting between its various compression ratios.

The VC-Turbo in the QX50 concept is a turbocharged 2.0-liter inline-4 that is able to offer any compression ratio between 8:1 (for high performance) and 14:1 (for high efficiency). In normal engines the compression ratio is fixed. Infiniti is targeting 268 horsepower and 288 pound-feet of torque for its first VC-Turbo engine. Those numbers are substantially better than the 208 hp and 258 lb-ft from Infiniti’s current turbocharged 2.0-liter inline-4, and the new engine will likely offer better fuel economy too.

As for ProPilot, this is the name of Nissan and Infiniti’s new self-driving technology. In the QX50 concept it’s more of an assist feature than a true self-driving feature. Infiniti says ProPilot will enable the concept—and likely the production model it will spawn—to crawl in traffic, cruise on the highway and keep track of surrounding vehicles on its own.

Infiniti hasn’t mentioned when its redesigned QX50 will arrive. We expect it to be revealed in late 2017 or early the following year.