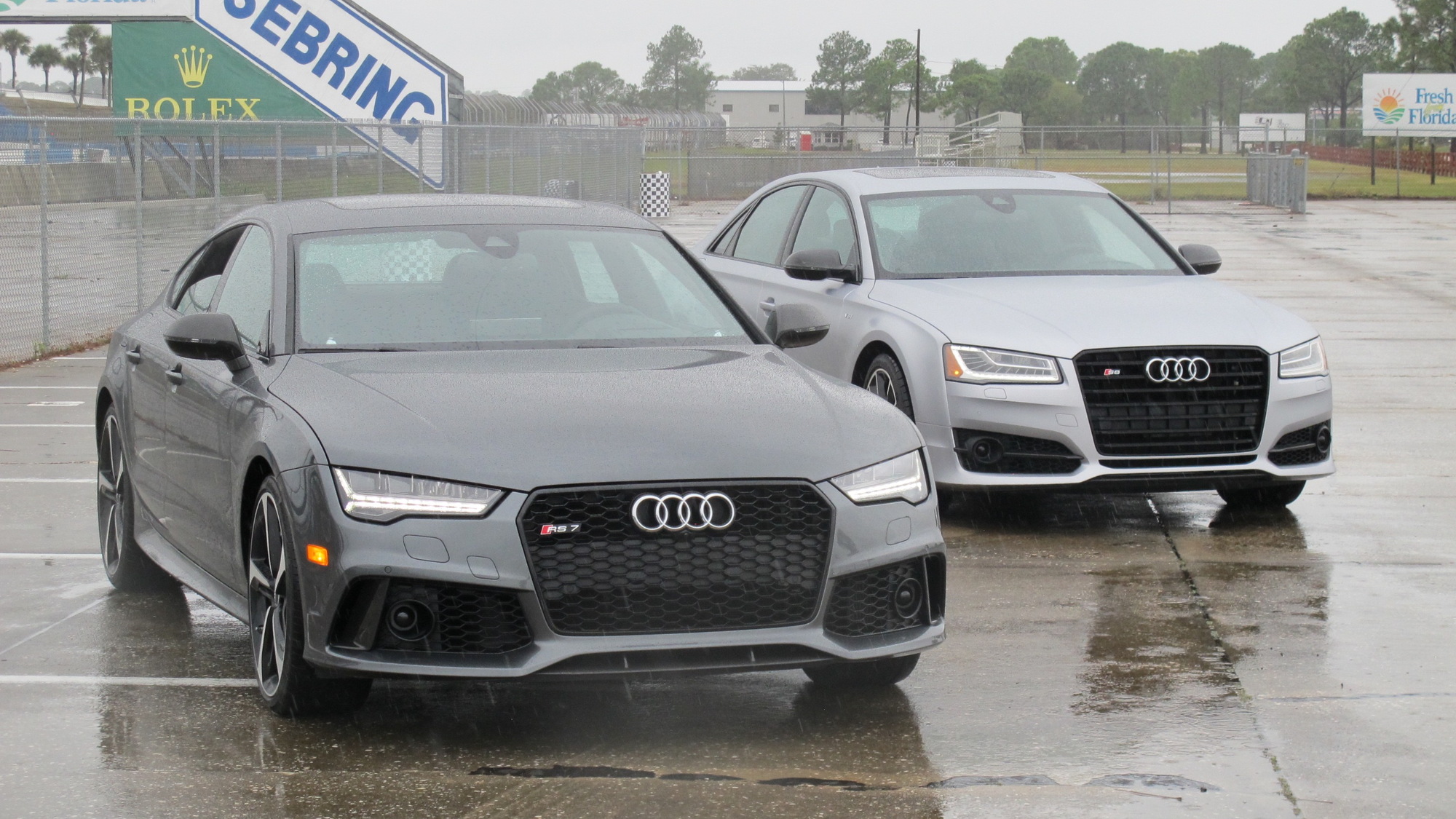 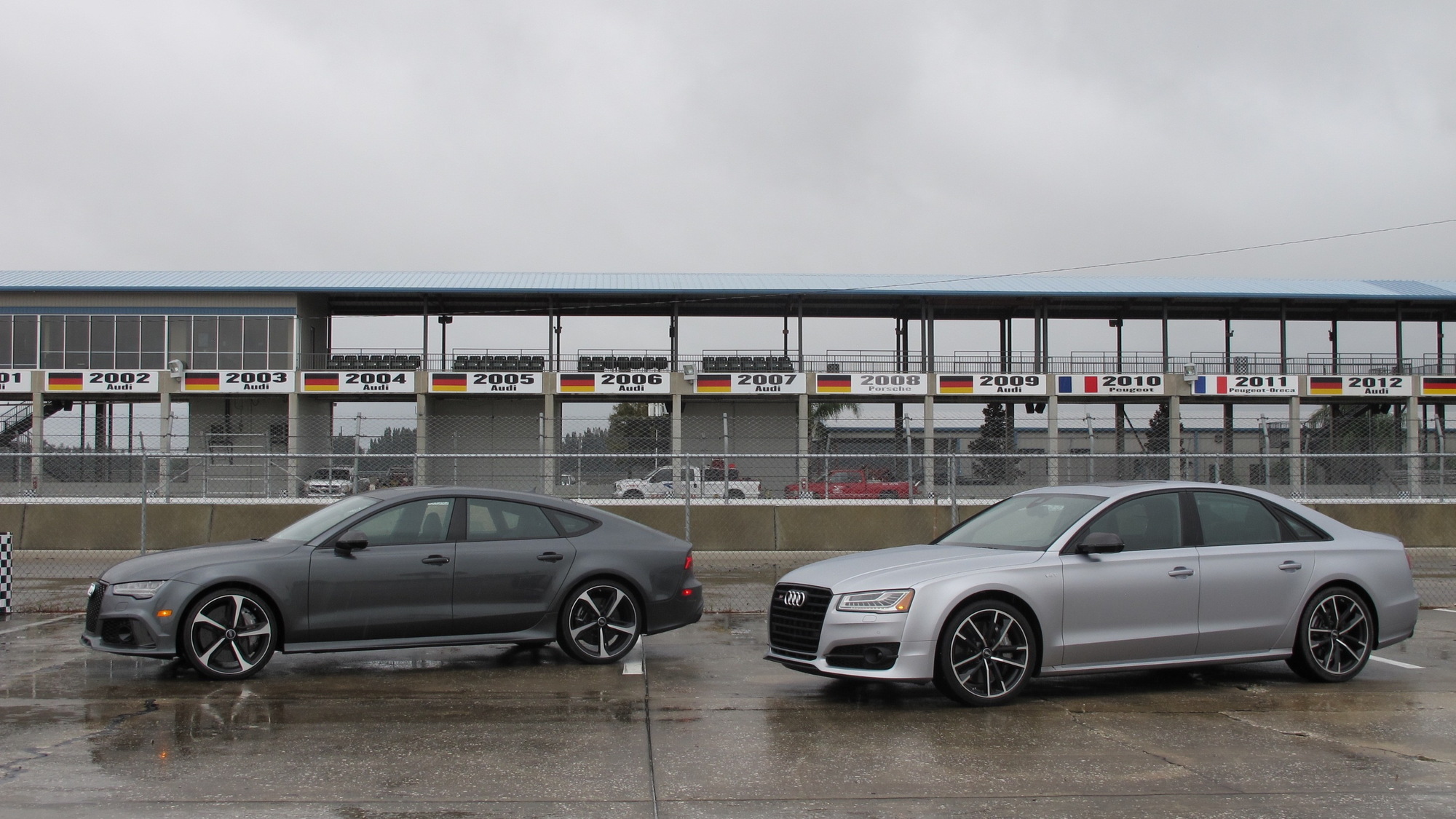 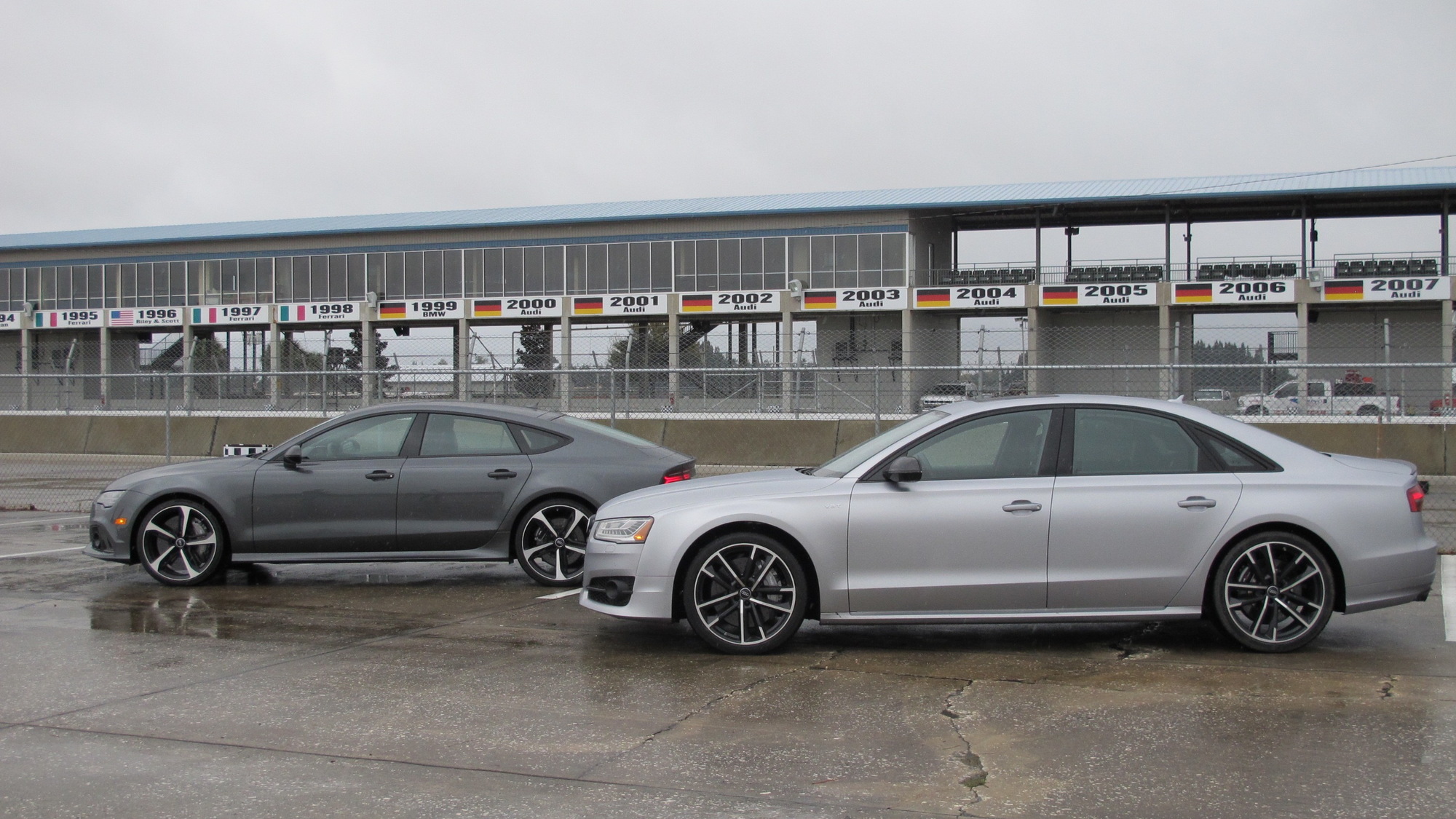 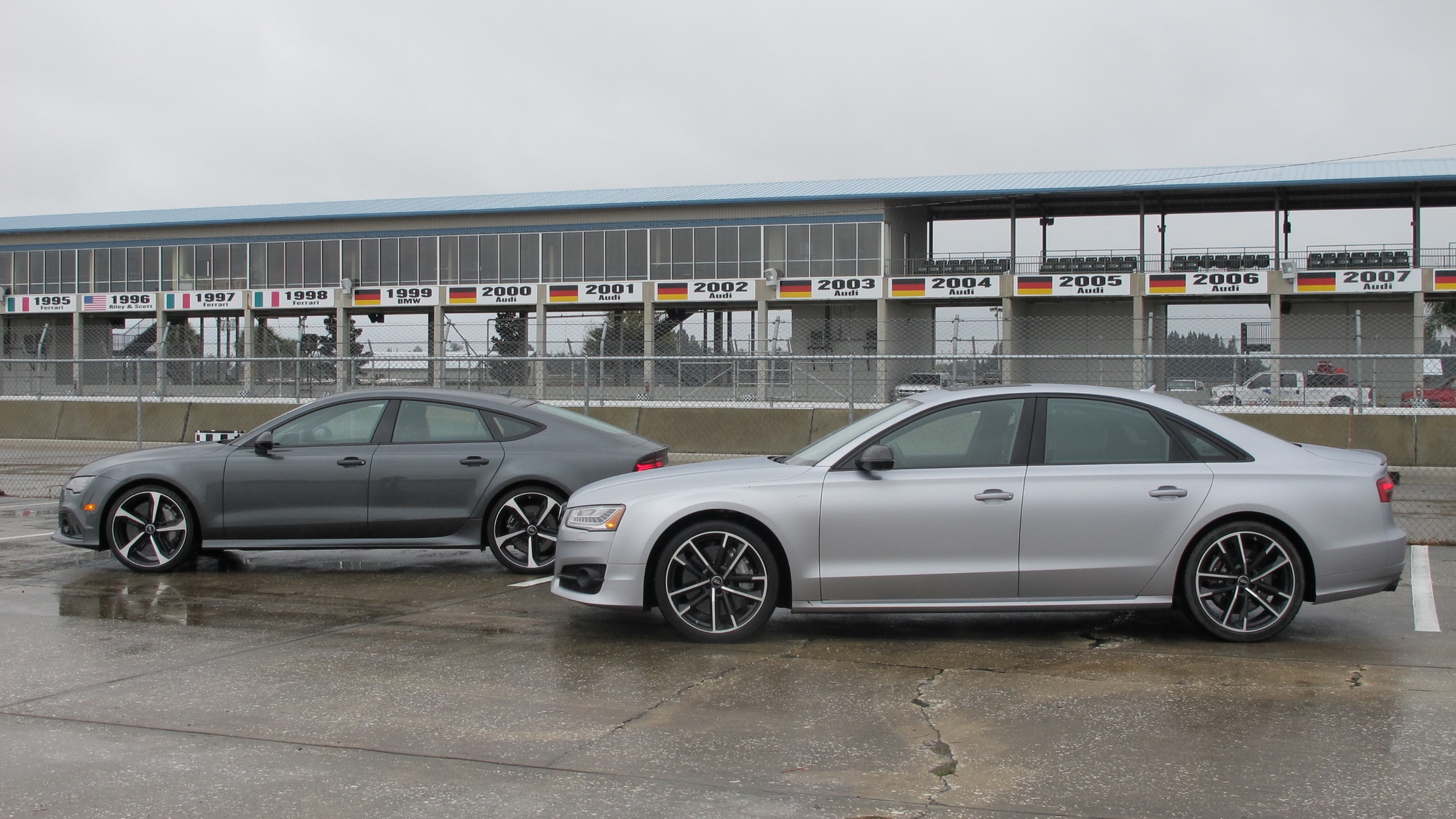 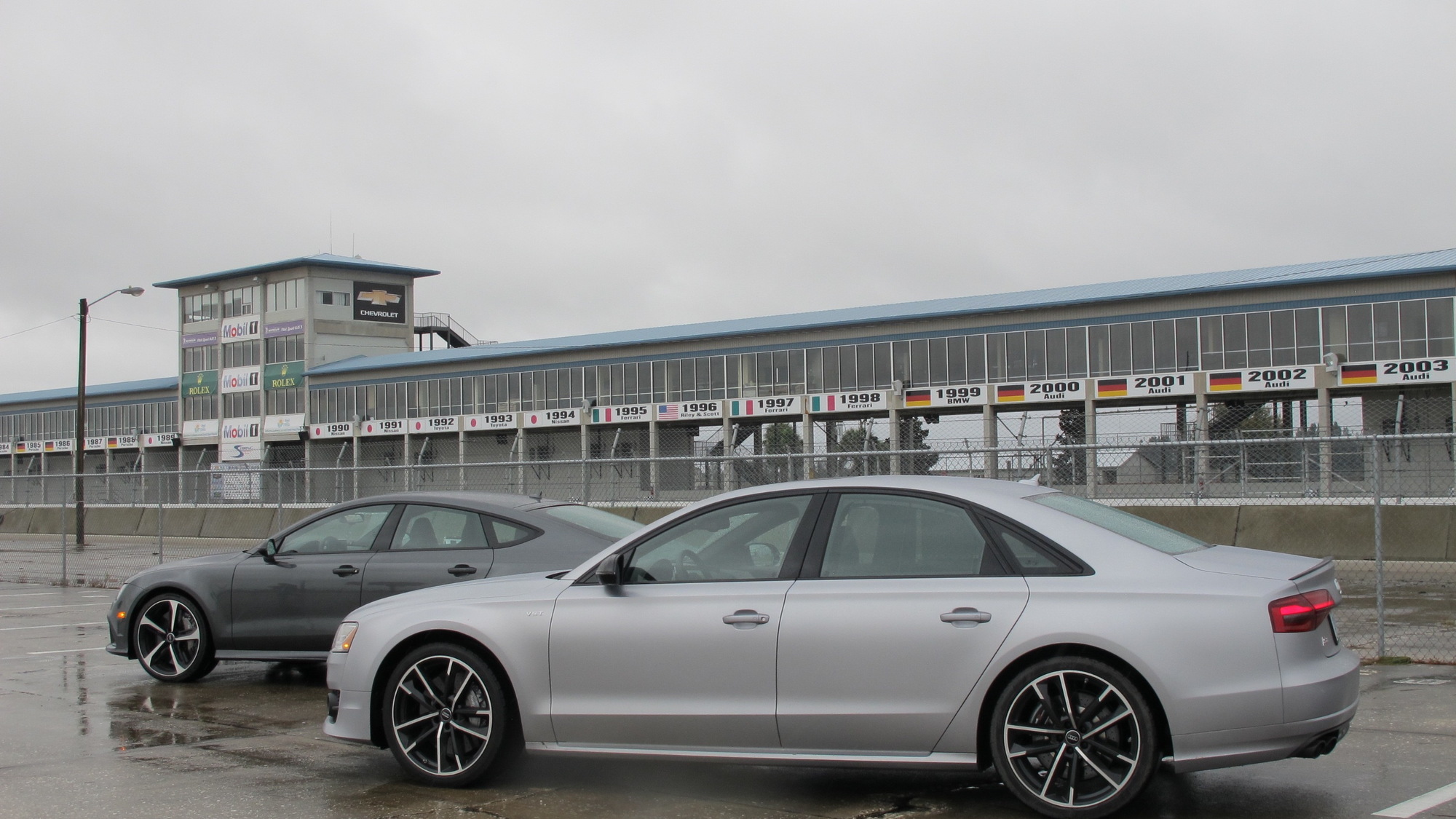 It wasn't that long ago that 300 horsepower was exceptional, 400 was the domain of Corvettes, and 500 was reserved for supercars. Then we saw a 662-horsepower Mustang and 707-horsepower Hellcats, and soon the 600-horsepower club had double-digit members. Add two more cars to that club for the 2016 model year as Audi has upped the output of its twin-turbocharged 4.0-liter V-8 for use in the S8 Plus and RS 7 Performance.

I spent last week with Audi as we attended the Rolex 24 At Daytona. As if to point out how far the horsepower race has come, Audi gave journalists plenty of seat time in the S8 Plus and RS 7 Performance, street cars with more power than the V-10 R8 LMS that was competing in the 24-hour endurance race.

More than just an engine

The throbbing heart of both cars is an uprated version of the brand's twin-turbocharged 4.0-liter V-8, now tuned to produce 605 horsepower and 553 pound-feet of torque. To increase the output, Audi engineers changed out the exhaust valves, tweaked the inner geometry of the turbochargers, and dialed up the boost pressure.

But those aren't the only changes for both cars. The S8's interior also gets Arras red accent stitching, Arras red piping on the sport seats, carbon fiber trim with streaked with red thread, and black alcantara on the headliner and rear parcel shelf.

On the outside, the grille surround has a gloss black finish, the honeycomb structure of the side air inlets and radiator screen are matte black, the taillights are darkened, and there is a gloss black diffuser insert, which also has a carbon fiber surround.

The RS7 Performance comes with all of these features, including the elements of the Dynamic Package. Instead of red, the interior accents are blue.

Drive the S8 Plus or RS 7 Performance around town, and the 4.0-liter V-8 is docile, emitting a classy, low rumble. Stab the throttle, though, and the engine roars to life, delivering a thrust of acceleration that rocks you back in your seat and starts to make the surroundings blur. To tap into the extra power--anything over 516 pound-feet of torque--you need to access the overboost by selecting the transmission's manual mode or choosing the drive mode selector's Dynamic setting, then mashing the throttle. Do that from a stop, and the quattro system hooks up, and 0 to 60 mph arrives in just 3.6 seconds in the RS 7 Performance and 3.7 seconds in the S8 Plus. When you let off the throttle, the power recedes, and the V-8 becomes a kitten once again.

Neither of these cars is a sports car. Instead, the are luxury cars infused with performance. Most of my time at the wheel was spent in rain-drenched highway travel. In that type of driving, the S8 Plus is a comfortable cruiser, with a supple suspension, especially with the drive selector in Comfort mode. Audi has tweaked the air suspension to retain the same smooth ride in Comfort mode but also to make it stiffer and more agile in Dynamic mode.

DON'T MISS: How The Ford GT Race Car Differs From The Road Car

The RS7 Performance is quite comfortable as well, but it's stiffer and it suffers from some up-and-down motions on uneven pavement.

The highlight of the trip was a one-lap no-holds-barred blast on the 3.56-mile track used for the Rolex 24 At Daytona. The layout uses much of the banked NASCAR oval with an infield section marked by tight turns. On the track, the RS 7 Performance was both impressive and challenged. In the long banked turns and big straights it built big-time speed. I wound up behind a slower car, but my drive partner reached 164 mph heading into the "bus stop" turn on the backstretch. That's crazy fast for a four-seat luxury cruiser.

However, the car's 4500-pound curb weight became quite evident in the infield's tight quarters, as the car understeered mightily and didn't particularly want to gather its weight to head back in the opposite direction. With little cooldown room, the carbon ceramic brakes also built up plenty of heat, but that shouldn't be a problem on the street. These are great street cars, but they really aren't meant for track duty.

It was a genuine pleasure to spend a long weekend in the S8 Plus and RS 7 Performance. These stylish cruisers have big pricetags but also offer a lot for the money. They feature the typically brilliant Audi interior appointments, plenty of space and comfort, amazing power, and a smooth ride infused with some performance credibility. Who thought 600 horsepower would be so easy to live with on a daily basis?