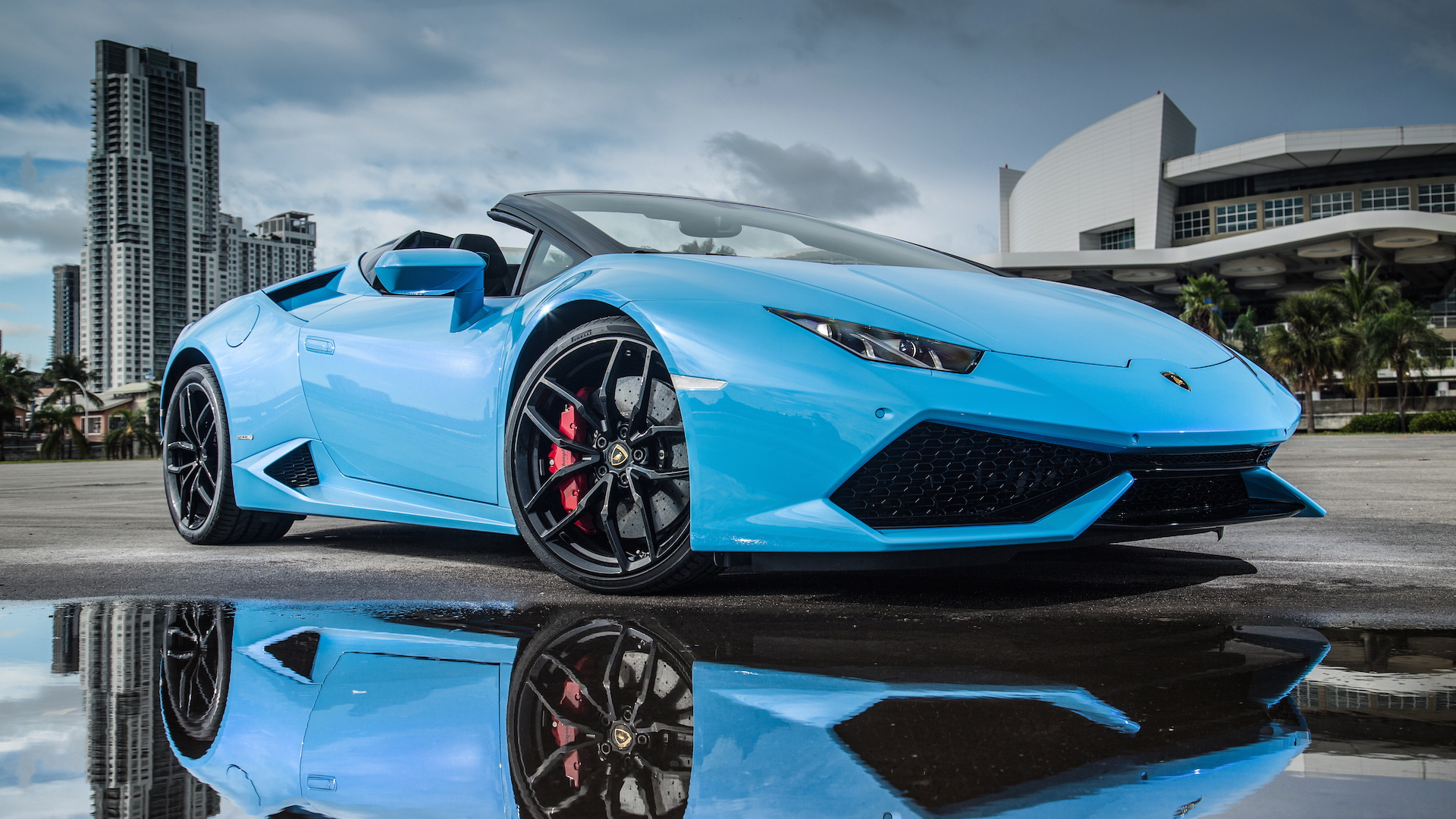 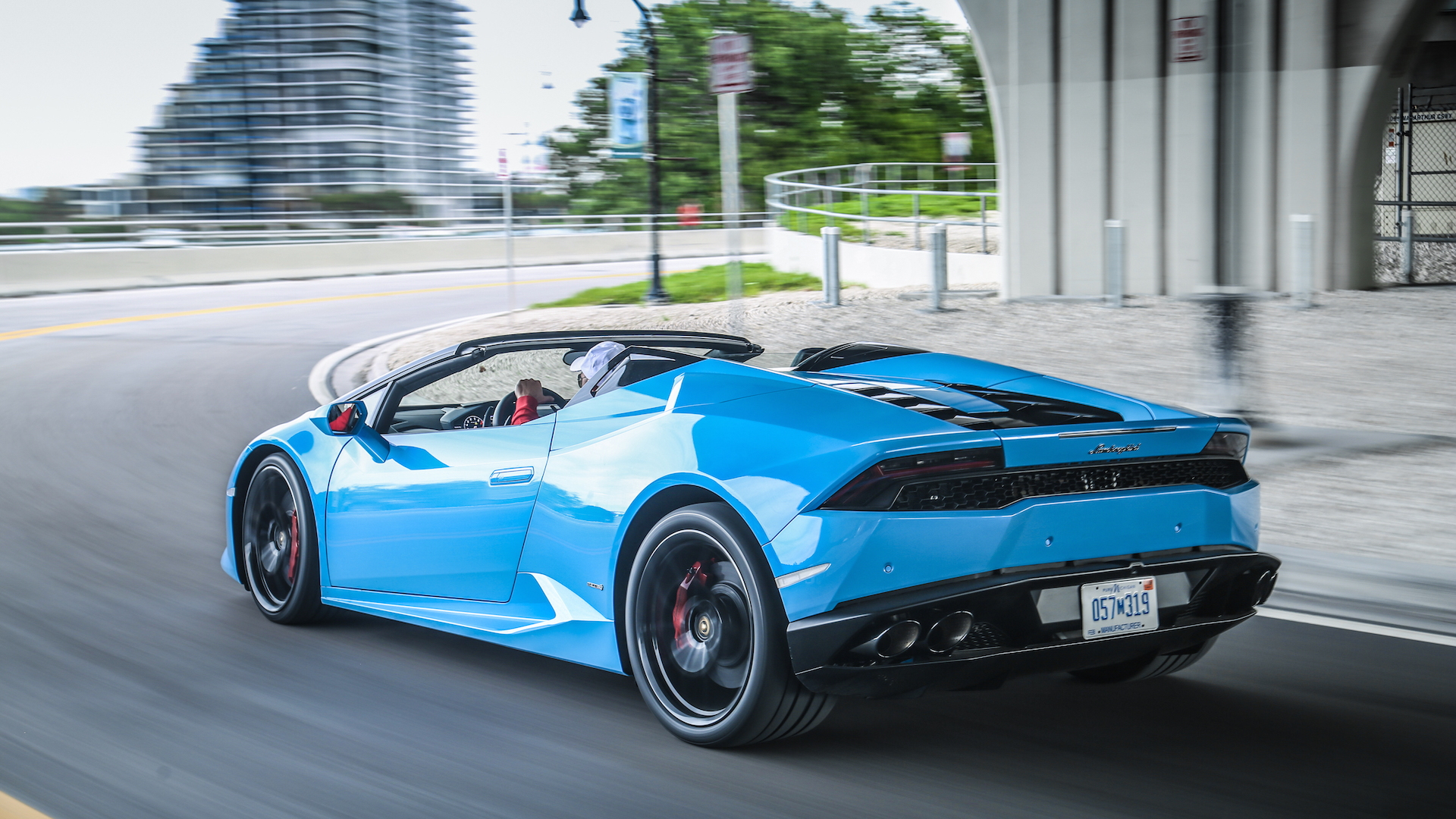 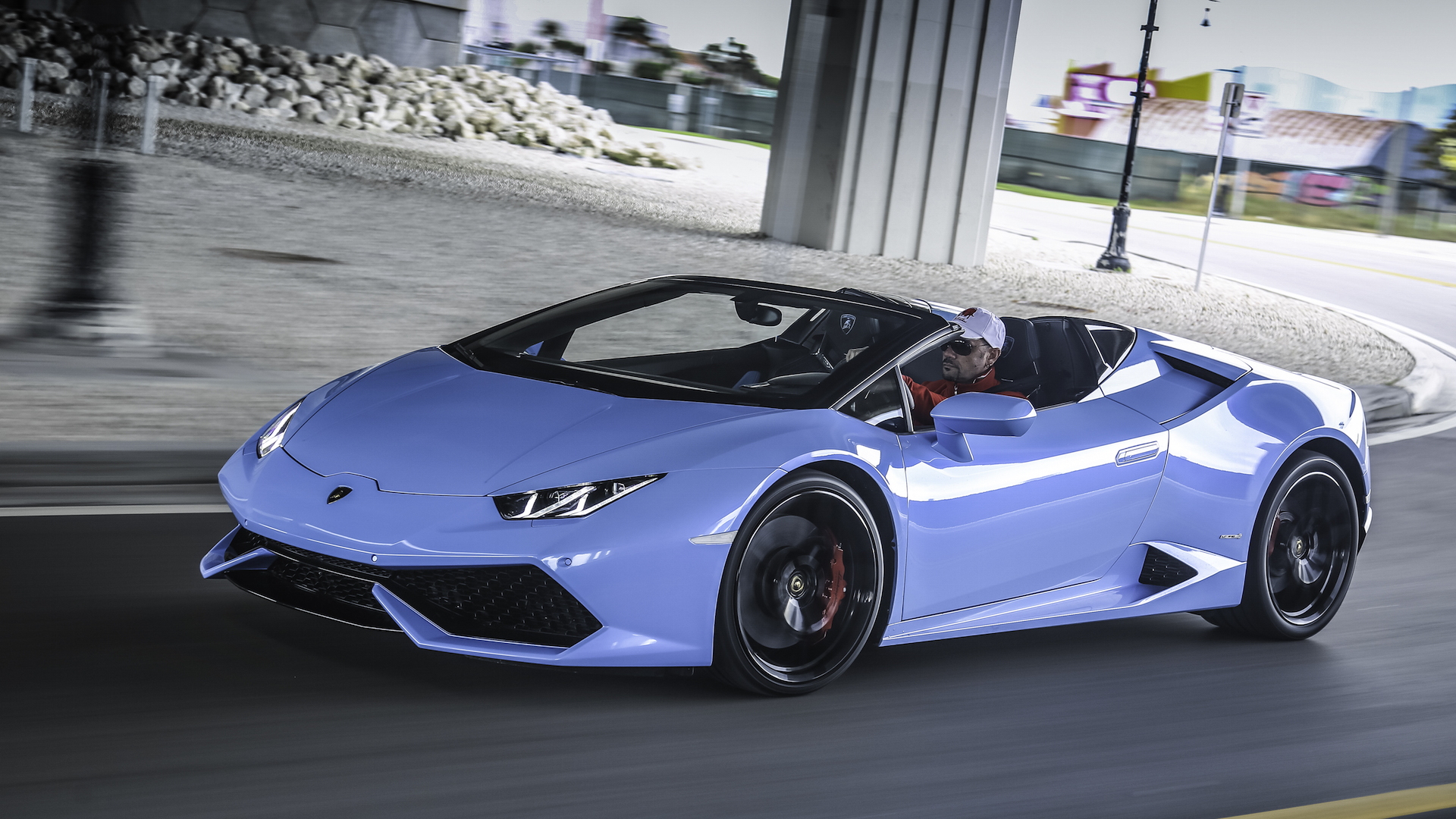 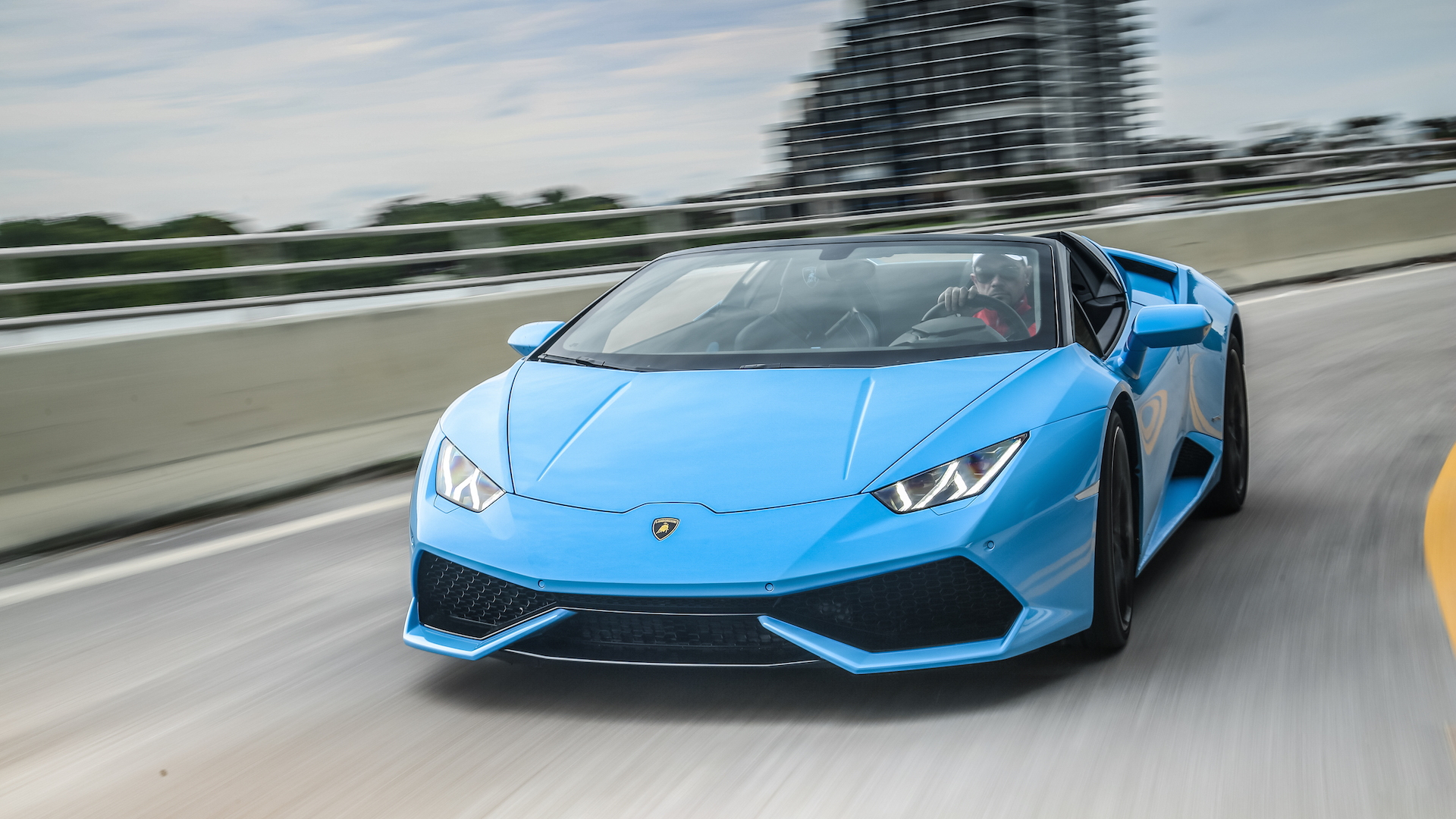 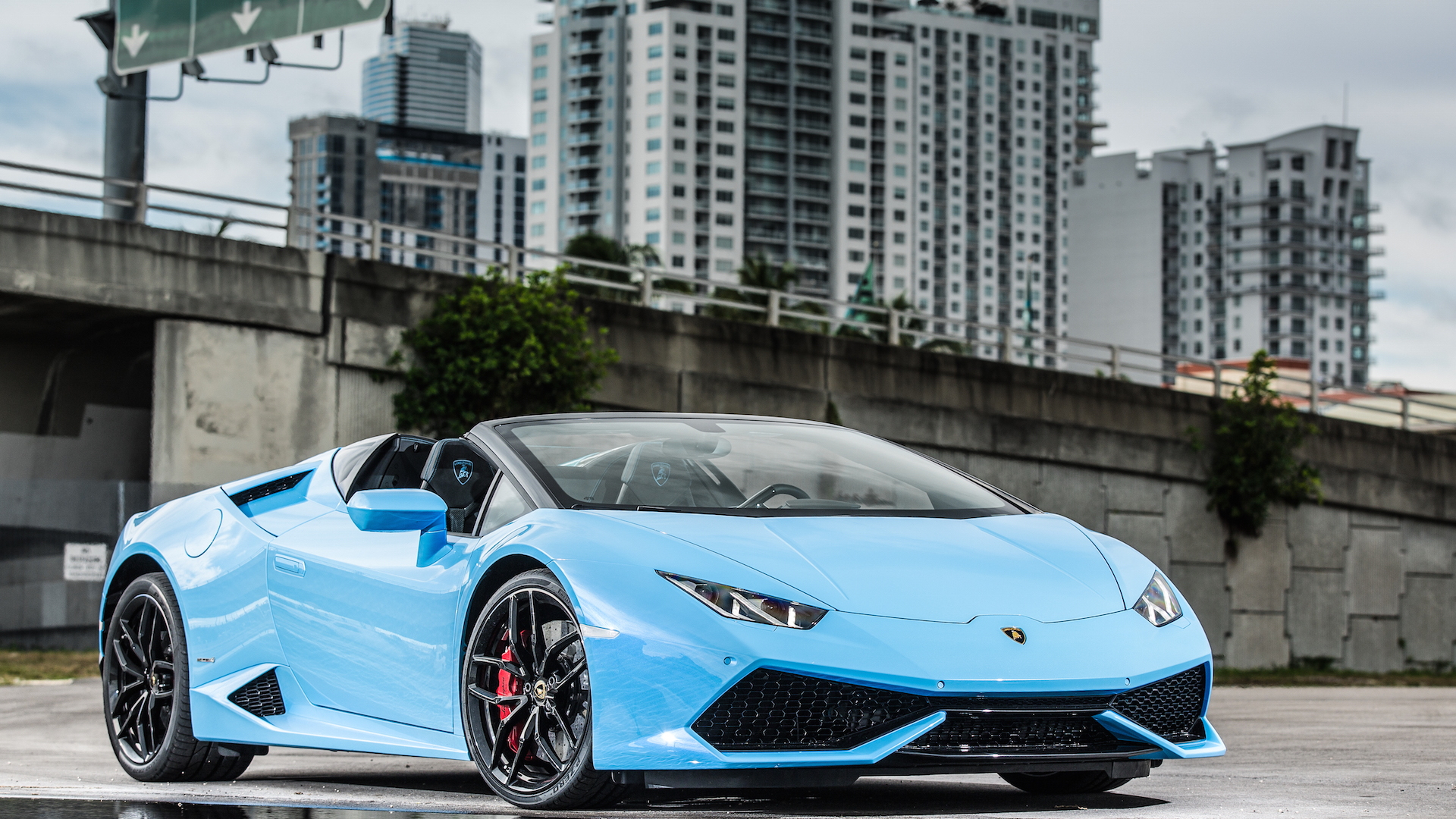 Before this week, I had driven a Lamborghini once. It was a Gallardo Spyder and I drove it about four miles in the mid-2000s. That wasn't enough time to get much of an impression, but I remember that the V-10 provided ridiculous power and an ear-searing engine note. The engine also vibrated like a washing machine with a brick in it. It wasn't a refined car, but it's raw nature made it quite appealing.

Almost a decade after that experience, I attended my first Lamborghini press drive this week in Miami. Given that I would be driving the Huracán LP 610-4 Spyder, a 610-horsepower supercar, I was hoping for a day of track time and twisty roads. Given that the event was in Miami, I was also hoping that the weather would be 75 and sunny. I'll have to wait until my next Lamborghini experience to get any of that.

With its soft convertible top, Lamborghini doesn't tout the Huracán Spyder for its performance. Lambo calls the Spyder its "lifestyle" car and therefore this was more of a lifestyle trip that involved low-speed cruising on Miami's streets. Unfortunately, it also involved a lot of rain, too. 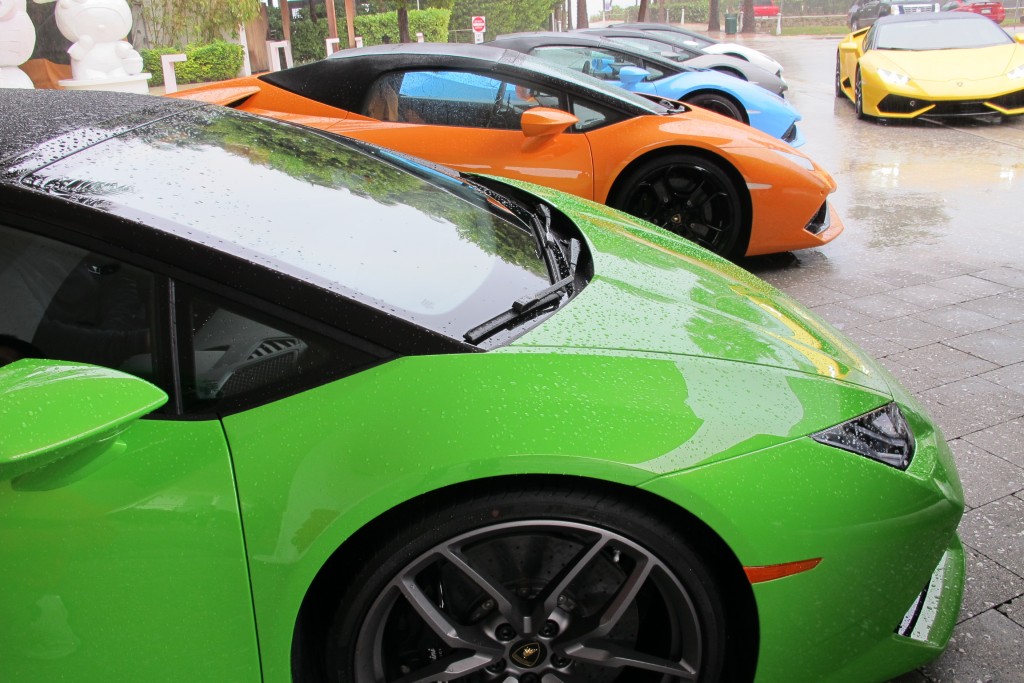 Lamborghini may say the Huracán Spyder is its lifestyle car, but that doesn't mean it isn't a performer. After all, it shares its aluminum spaceframe with the Huracán coupe (as well as the upcoming 2017 Audi R8), and that structure, which uses carbon fiber for the firewall and central tunnel, is light and strong. Torsional rigidity is up 40 percent compared to the Gallardo Spyder, and Lamborghini says the droptop is almost as sturdy as the coupe.

The engine is also shared with the Huracán coupe and the R8. It is a 5.2-liter V-10 that kicks out 610 horsepower at 8,250 rpm and 413 pound-feet of torque at 6,500 rpm. It features Lambo's “Iniezione Diretta Stratificata,” which is Italian for direct and port fuel injection. Providing both types of fuel injection creates fewer emissions upon startup and allows the computer to choose which type of injection works best for the throttle demands. Compared to the coupe, however, this V-10 adds start/stop technology and cylinder deactivation, both of which help it improve emissions by 14 percent over the V-10 in the Gallardo Spyder.

The V-10 is mated to the "Lamborghini Doppia Frizione” seven-speed dual-clutch transmission, and the power is sent to all four wheels thanks to standard all-wheel drive.

The reason Lamborghini views the Huracán Spyder as a lifestyle car is its convertible soft top. No matter how good the top is or how quickly the roll bars pop up behind the occupants, if you flip the car over on a track, there is no metal up top to save you.

Lamborghini offers the electrohydraulic soft top in black, brown or red. It is very well integrated into the car. With the top up, the Huracán's sharp, aggressive lines play out over the car much like they do on the coupe. In fact, the profile is pretty much the same. Put the top down, and Lamborghini provides some pieces to block out wind and contribute to a cohesive design. A pair of fins rise up to flow with the shape of the rear deck. They have integrated ducts to reduce turbulence, and a pair of removable lateral wind guards do the same.

CHECK OUT: 2016 Audi RS 7 Performance and S8 Plus First Drive 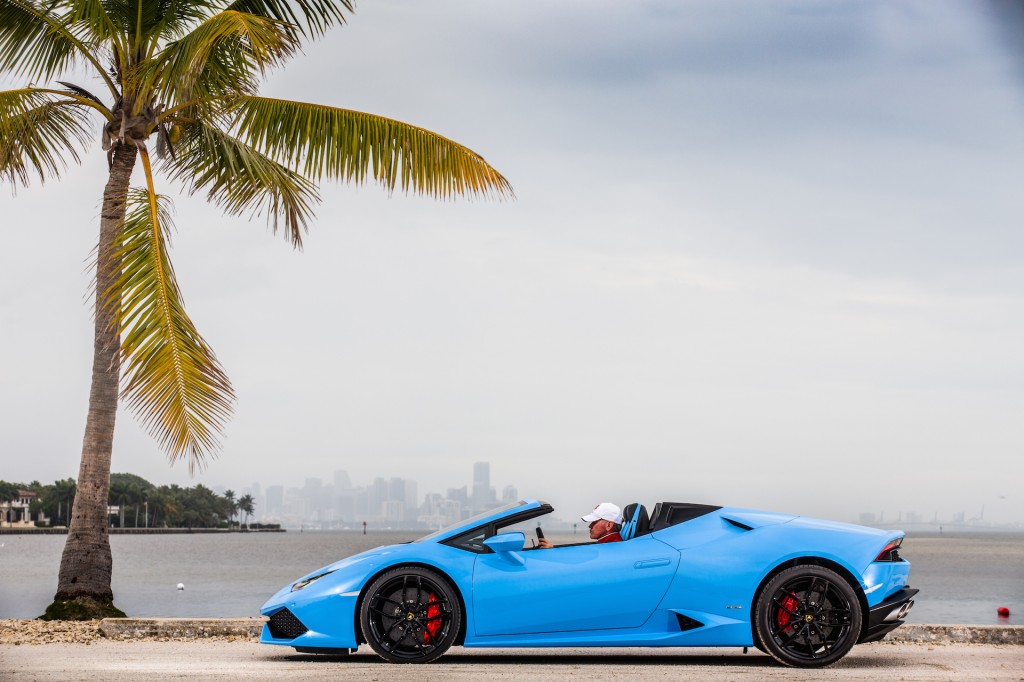 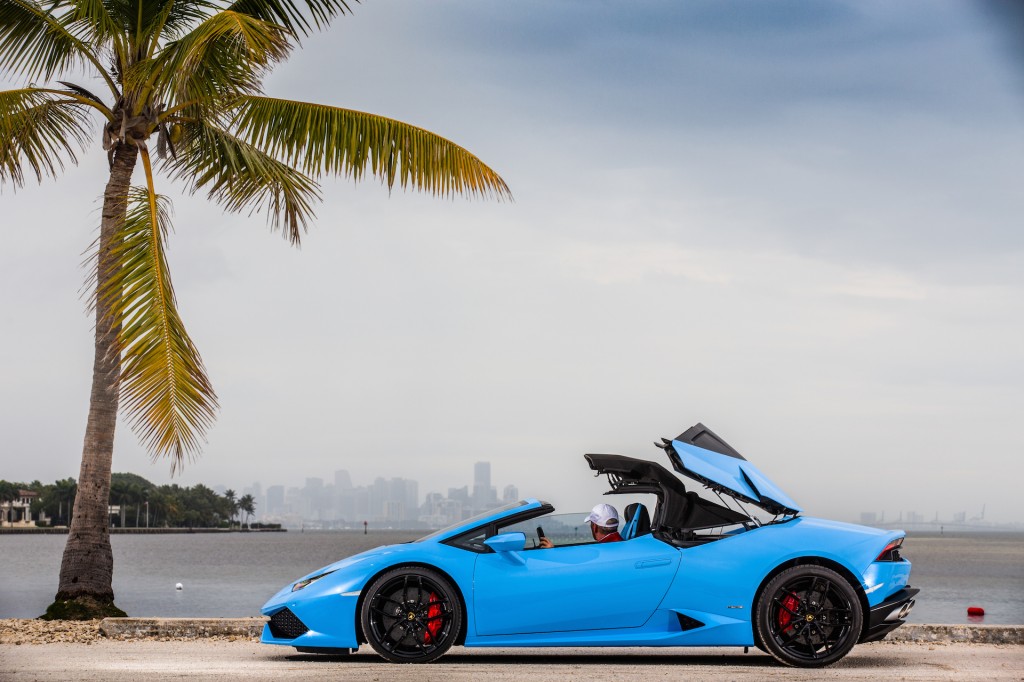 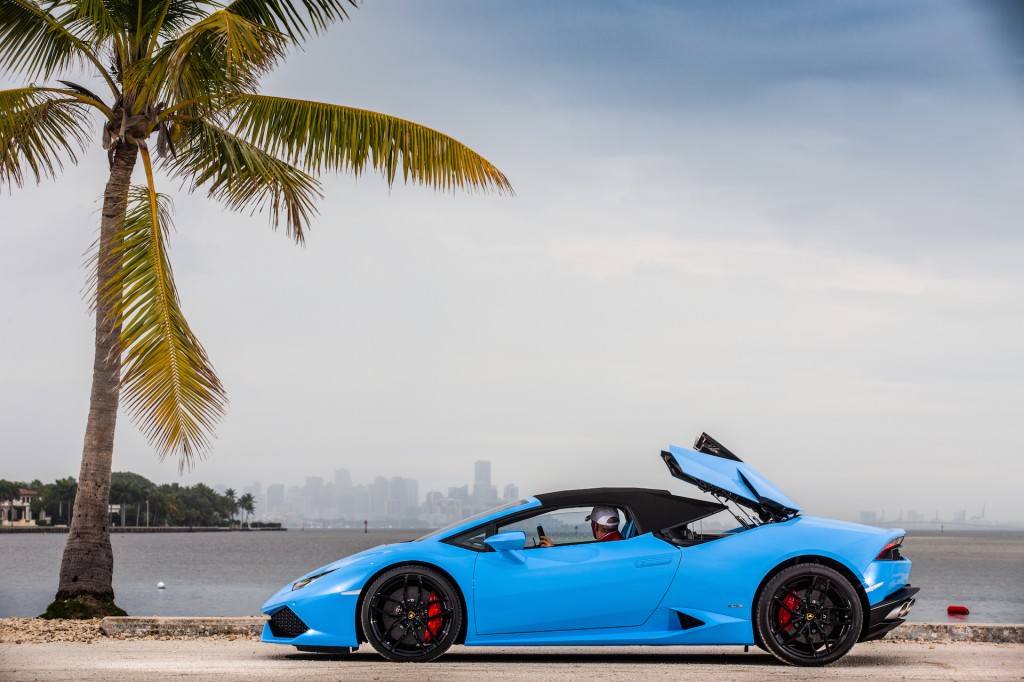 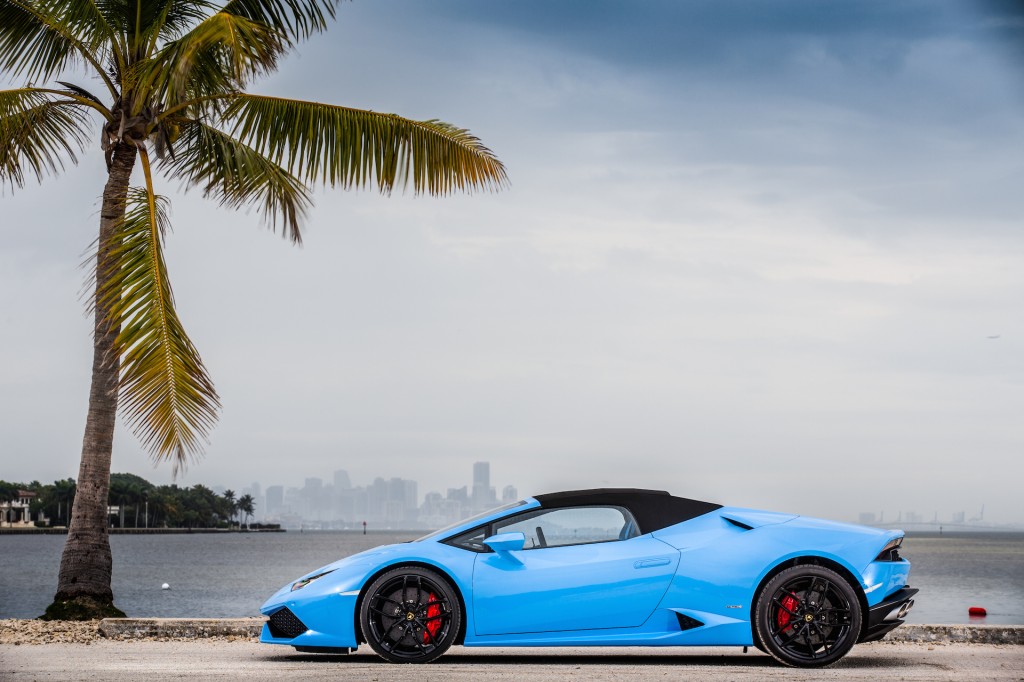 On this rainy day, I found the top is well made, too. It consists of three layers that block out noise quite effectively. It fits well; I experienced no leaks during six or seven hours of rain. And it works as advertised, going up or down in 17 seconds at speed up to 31 mph. I expected the top would less well designed and engineered, like something you might get from a small boutique brand instead of a mainstream automaker. I was pleasantly surprised to be wrong.

A dose of refinement

That same dose of refinement is evident in the cabin. Sure, the Huracán Spyder has its supercar quirks, but it's thoughtfully designed and well assembled. The interior materials are Audi quality, which is no coincidence because Audi owns Lamborghini. In fact, the Audi influence can be found in the infotainment system. It's a stripped down version of Audi's MMI control interface, complete with a central knob surrounded by familiar buttons that control the information on the 12.3-inch instrument panel screen. It's not as comprehensive as the Audi system, but it controls the Lambo's phone, optional navigation system (optional on a $265,000 car!), and other functions quite well. 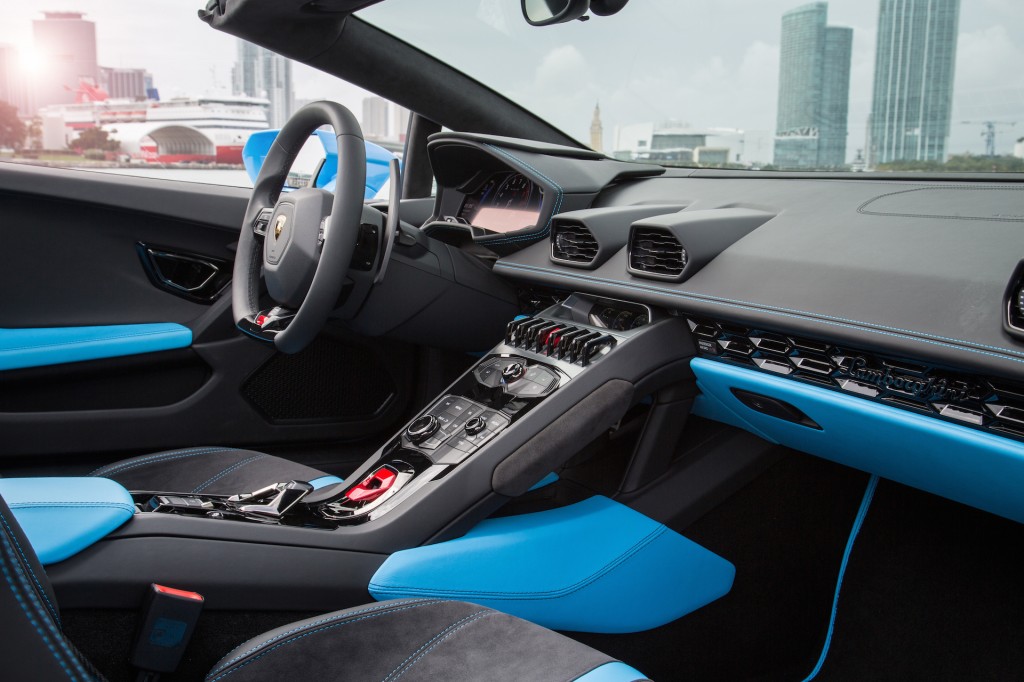 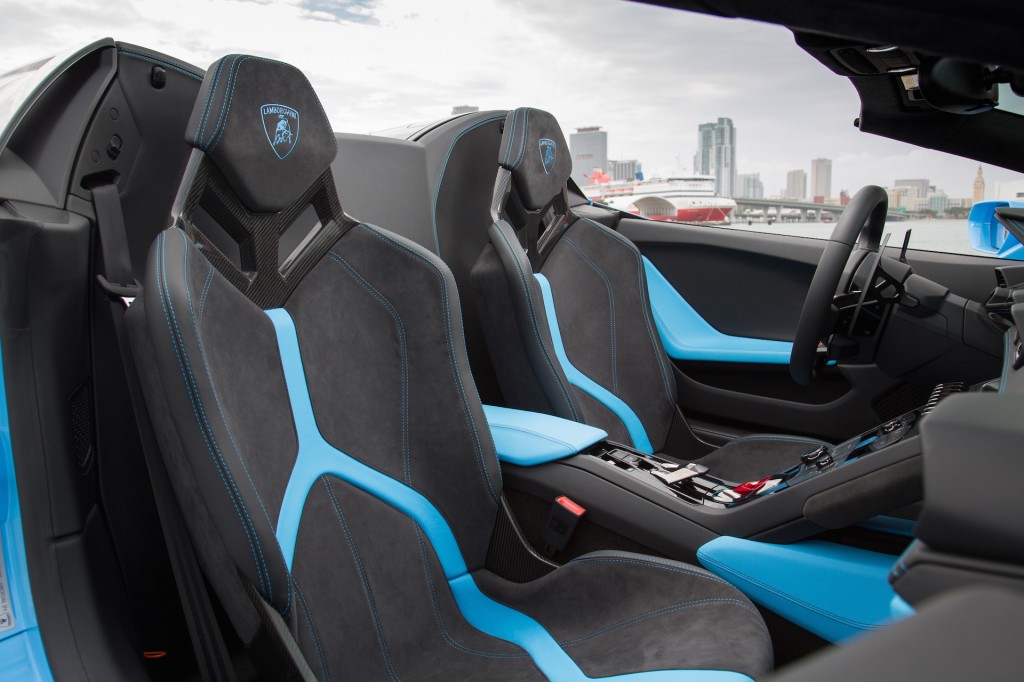 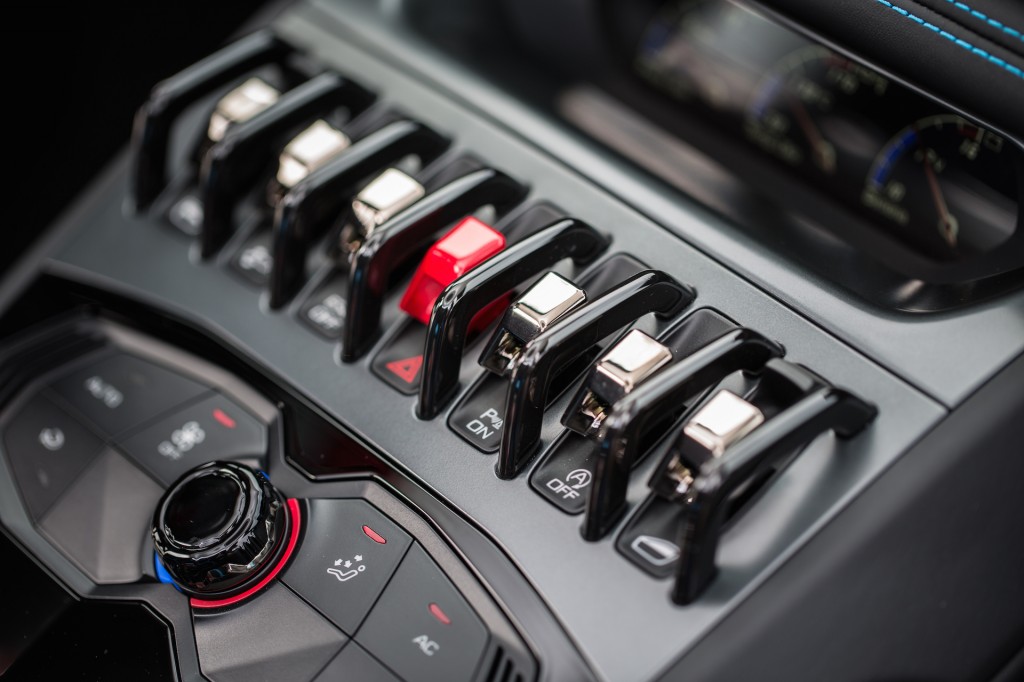 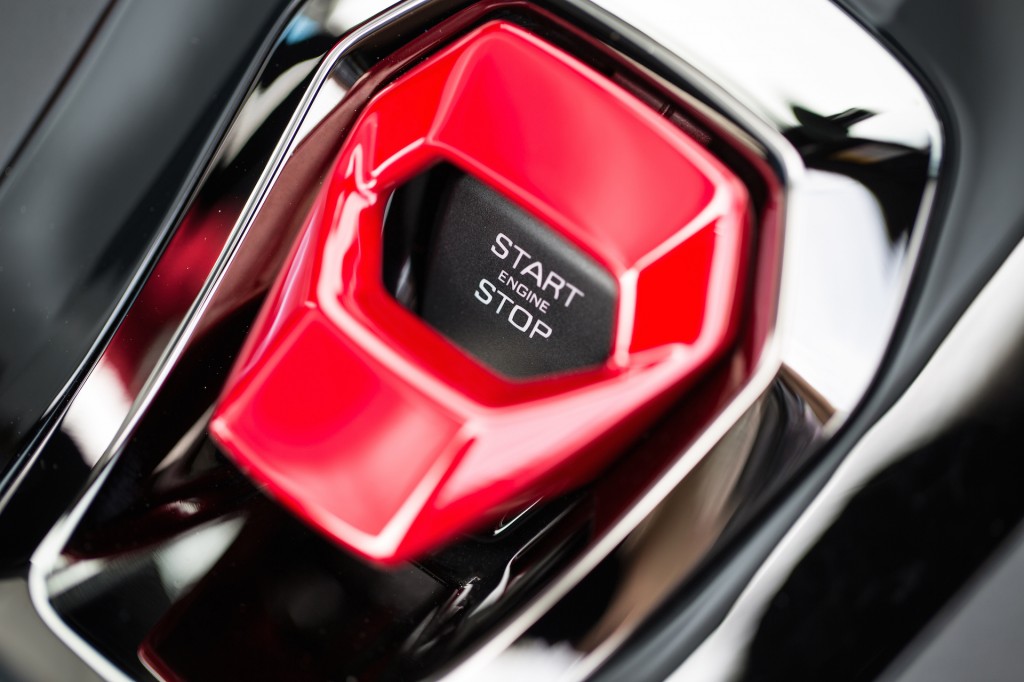 Of course, some of those small company supercar quirks are still there. The climate controls are a jumbled mess, it's hard too see out the back over the tall rear deck, the turn signals and wiper controls are on the steering wheel, the seats are hard and narrow, legroom becomes a problem for anyone over six foot, the front wheelwells intrude into the foot space of the driver and passenger, and getting into the car involves a steep drop down while getting out requires more core strength than many of the greatest-generation CEO-types that can afford this car possess.

Still, many of those issues are more charming than truly problematic, and the Huracán Spyder has a refined feel that is far more finished than that Gallardo Spyder I drove years ago.

With a supercar at my disposal, it was tempting to push the Huracán Spyder to find its performance limits. On this day, however, the rain put a kibosh on any of that activity. The most I could experience was a few bursts of acceleration, which was quite thrilling in its own right. The V-10 emits a throaty "whumm" when fired up, and its melody is a constant companion that sounds better than any music you can play on the optional Sensonum audio system. The soundtrack is louder and more in your face than you get with the 2017 Audi R8, it pops and crackles when you let off the gas, and the throttle pedal acts like a volume knob. It's a little obnoxious but in line with the Huracán's aggressive personality.

The dual-clutch transmission is perfectly in tune with the V-10. It reacts differently based on what mode the Advanced Network Intelligence Management (ANIMA) system is in. It's fairly docile in the base Strada mode, and more aggressive the Sport and track-ready Corsa modes. In fact, when in Sport or Corsa, the transmission is always in the right gear to make the power readily available. ANIMA also adjusts the performance of the engine, exhaust, all-wheel-drive system, and electronic stability control. In Sport or Corsa, the ESC is cut back 40 percent to let the tail hang out in corners. 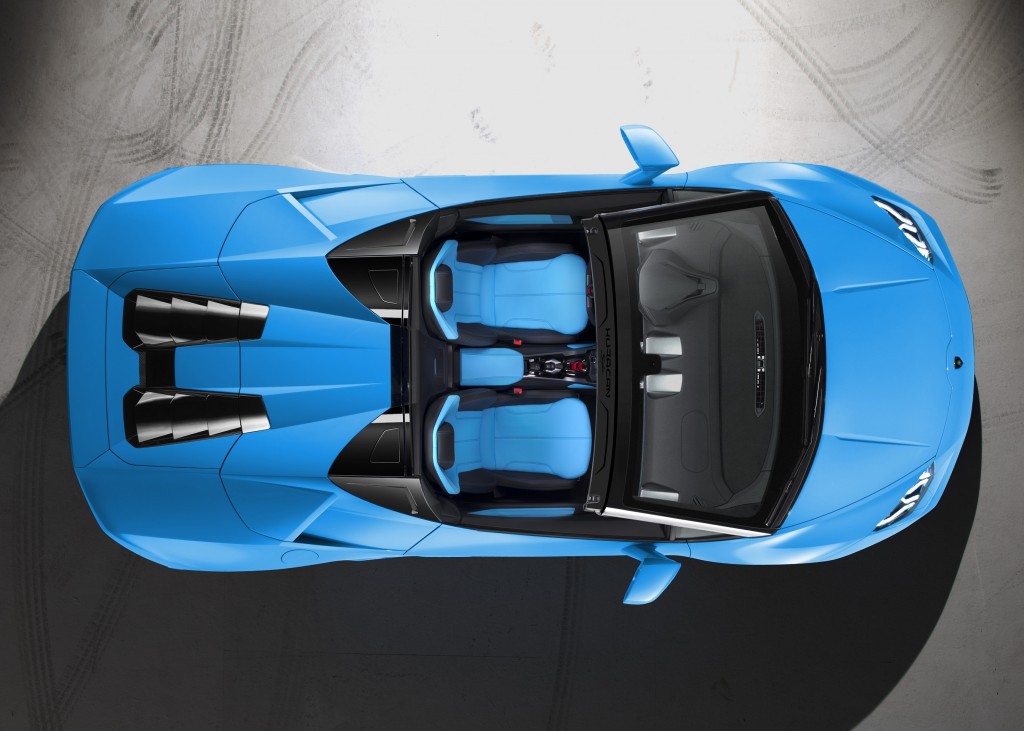 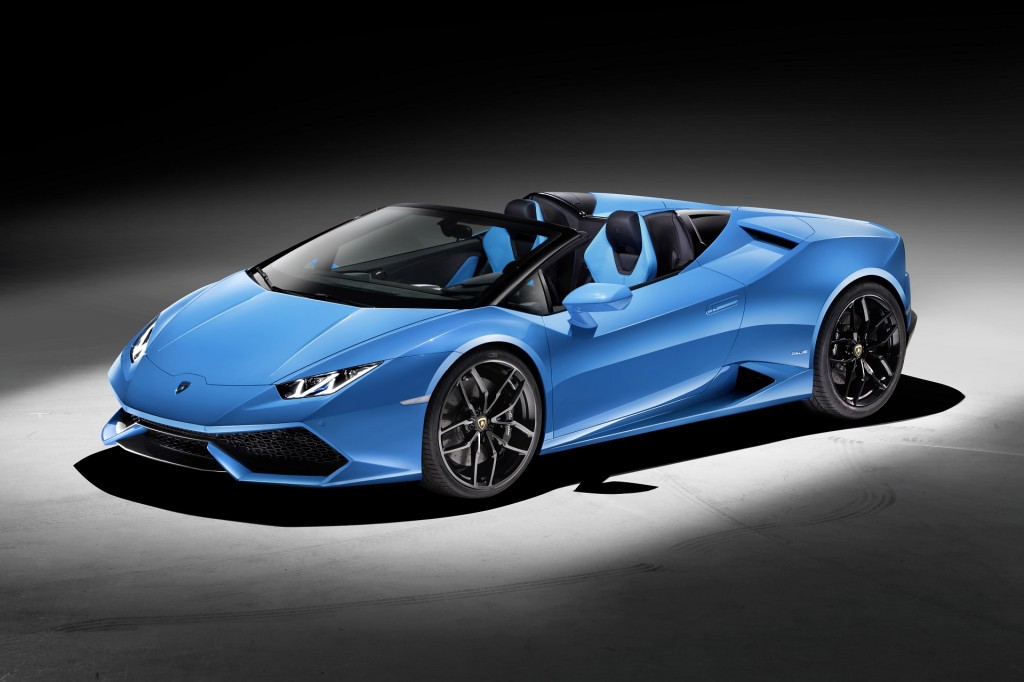 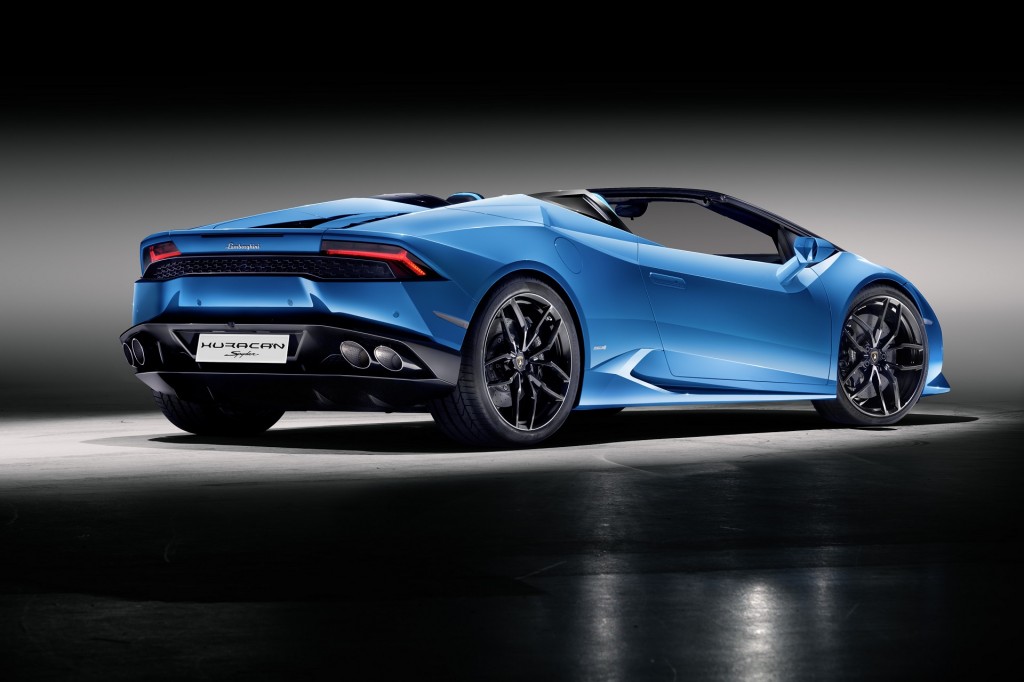 I'd like to tell you about the handling and sing the praises of the Huracán Spyder's on-track performance, but a day of driving on rainy city streets makes that impossible. Instead, I drove the car like many of its owners will, cruising the streets, looking conspicuous, and attracting plenty of attention in South Beach. In that type of drive, the ride proved to be firm but not punishing, and I detected no cowl shake. The optional magnetorheological shocks help make it livable on the street and agile on the track. Lamborghini Dynamic Steering is also optional. It adjusts the ratio depending on speed, but again, I didn't really experience that. And while I never needed heavy braking, the brakes have a progressive pedal and the standard carbon ceramic rotors are almost guaranteed to be strong enough for racetrack duty.

My second turn behind the wheel of a Lamborghini wasn't a complete bust. I'm left with the impression that Audi's influence gives the Huracán Spyder a shot of welcomed refinement, while Lamborghini's passionate Italian character still shines through in design, power, performance, and outright aggression.

After a somewhat disappointing day of rain on slow, straight city streets, Lamborghini threatened to make a Huracán Spyder available in California so I can rip through canyon roads. It sounds like my third turn in a Lamborghini will be the charm. I'll be happy to report on that experience if I can make it happen this summer.