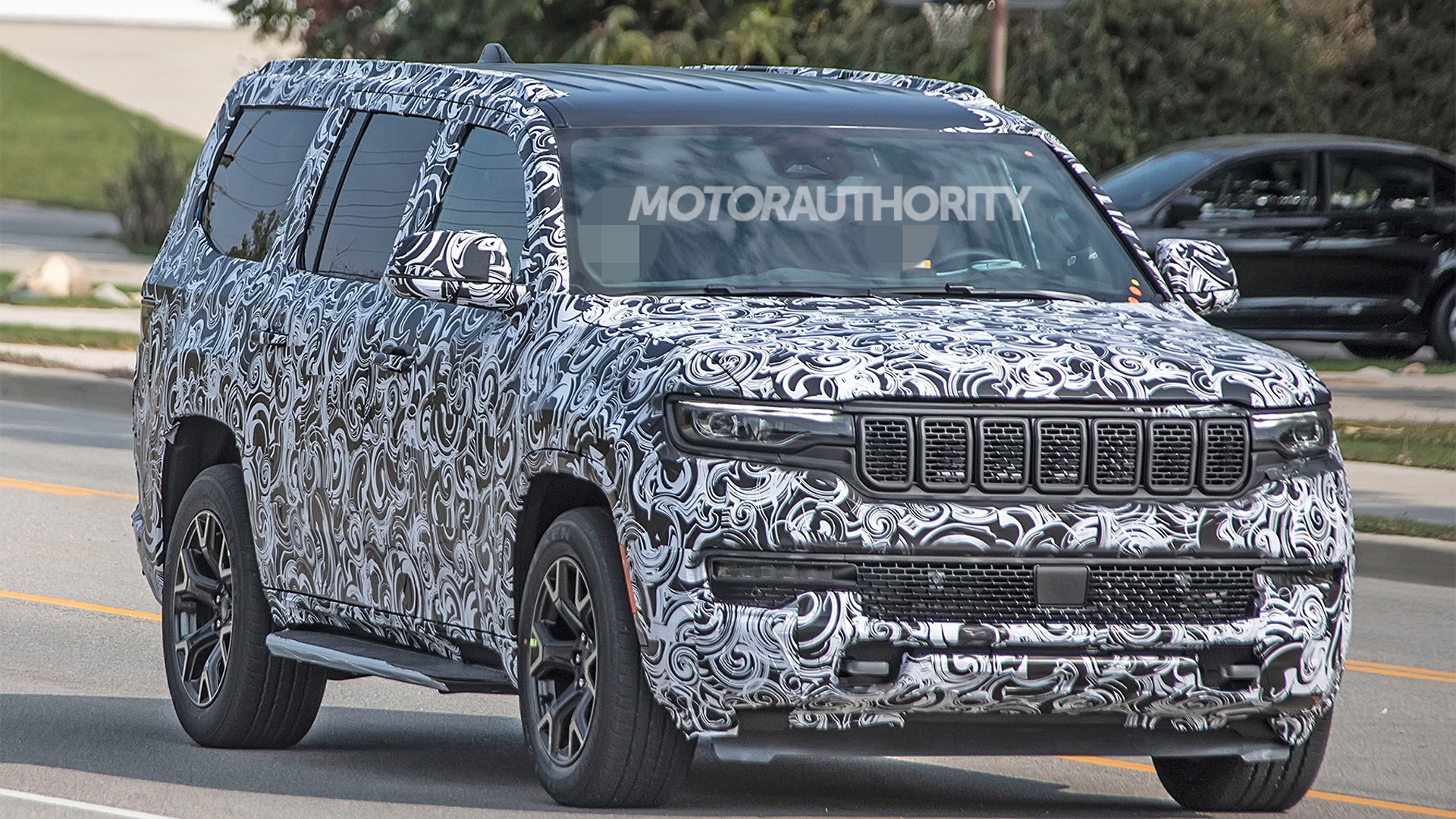 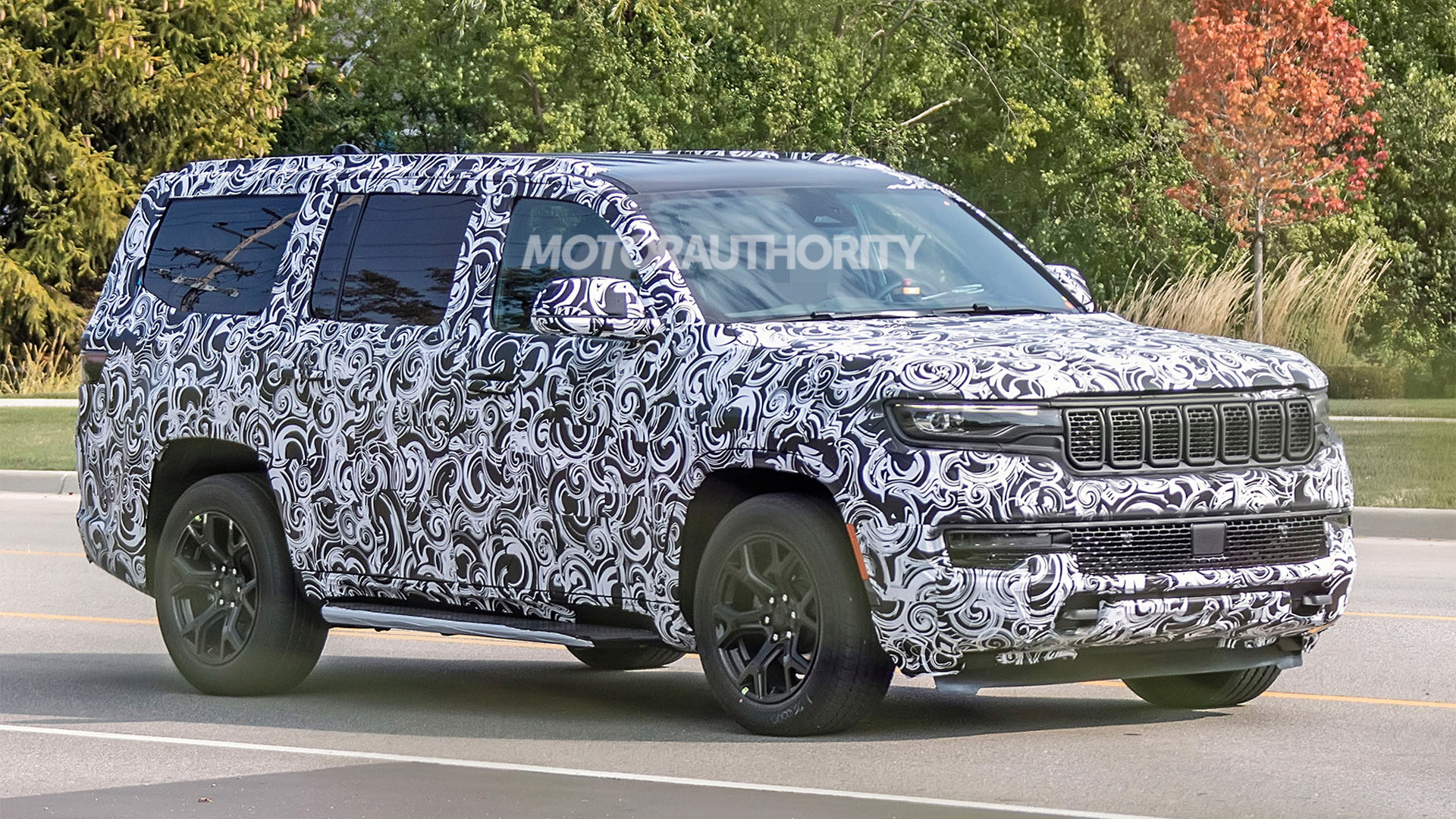 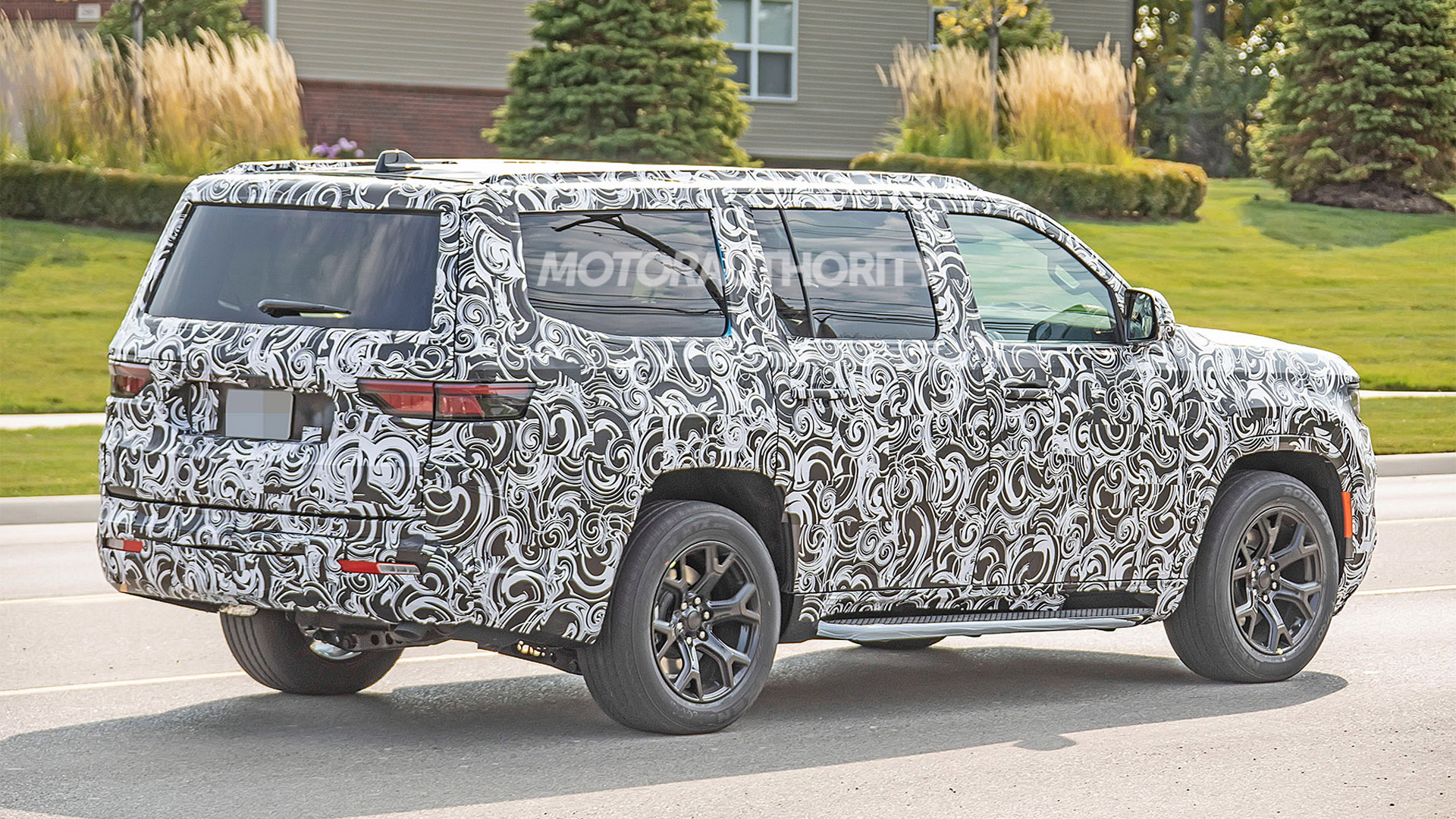 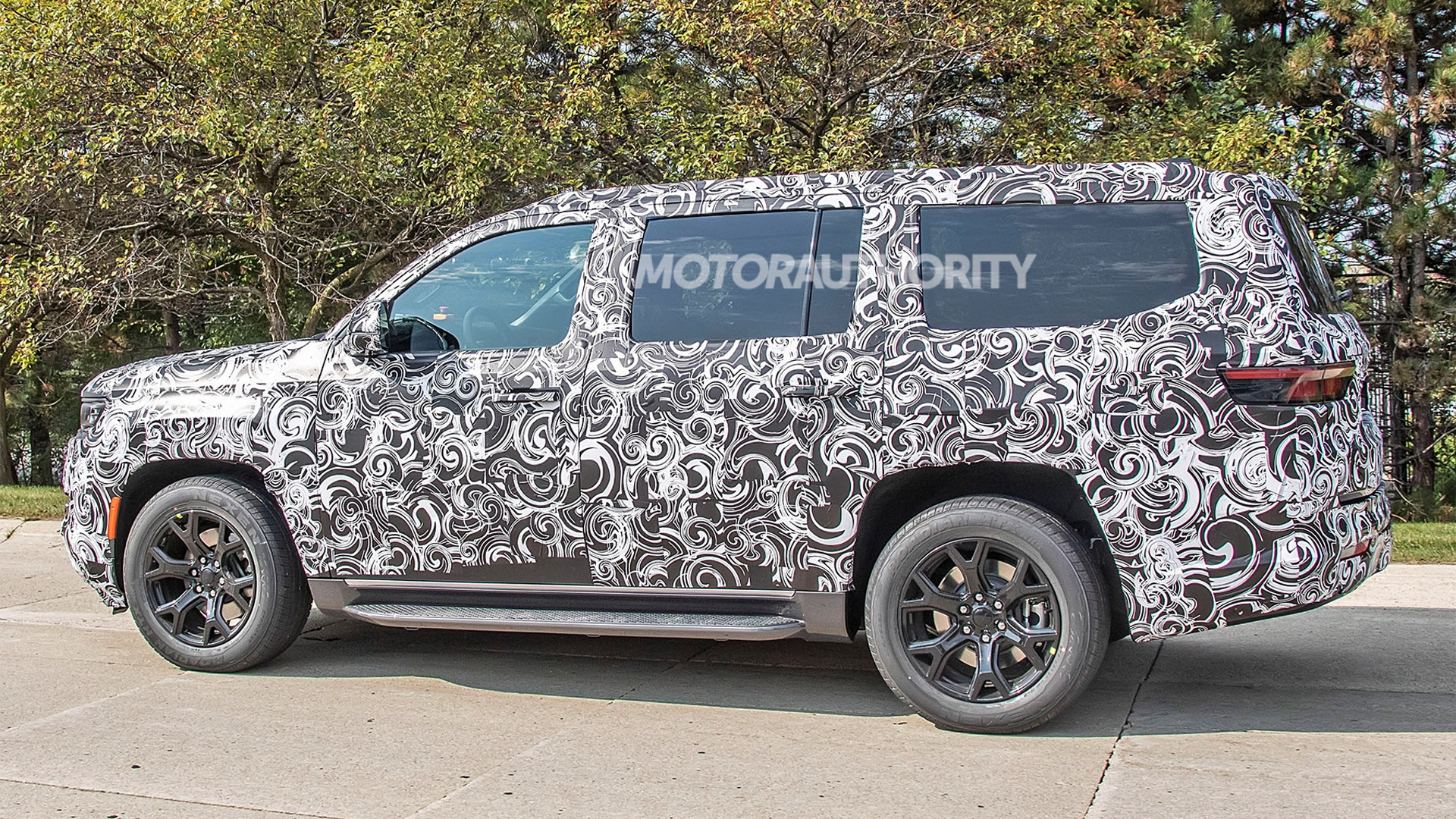 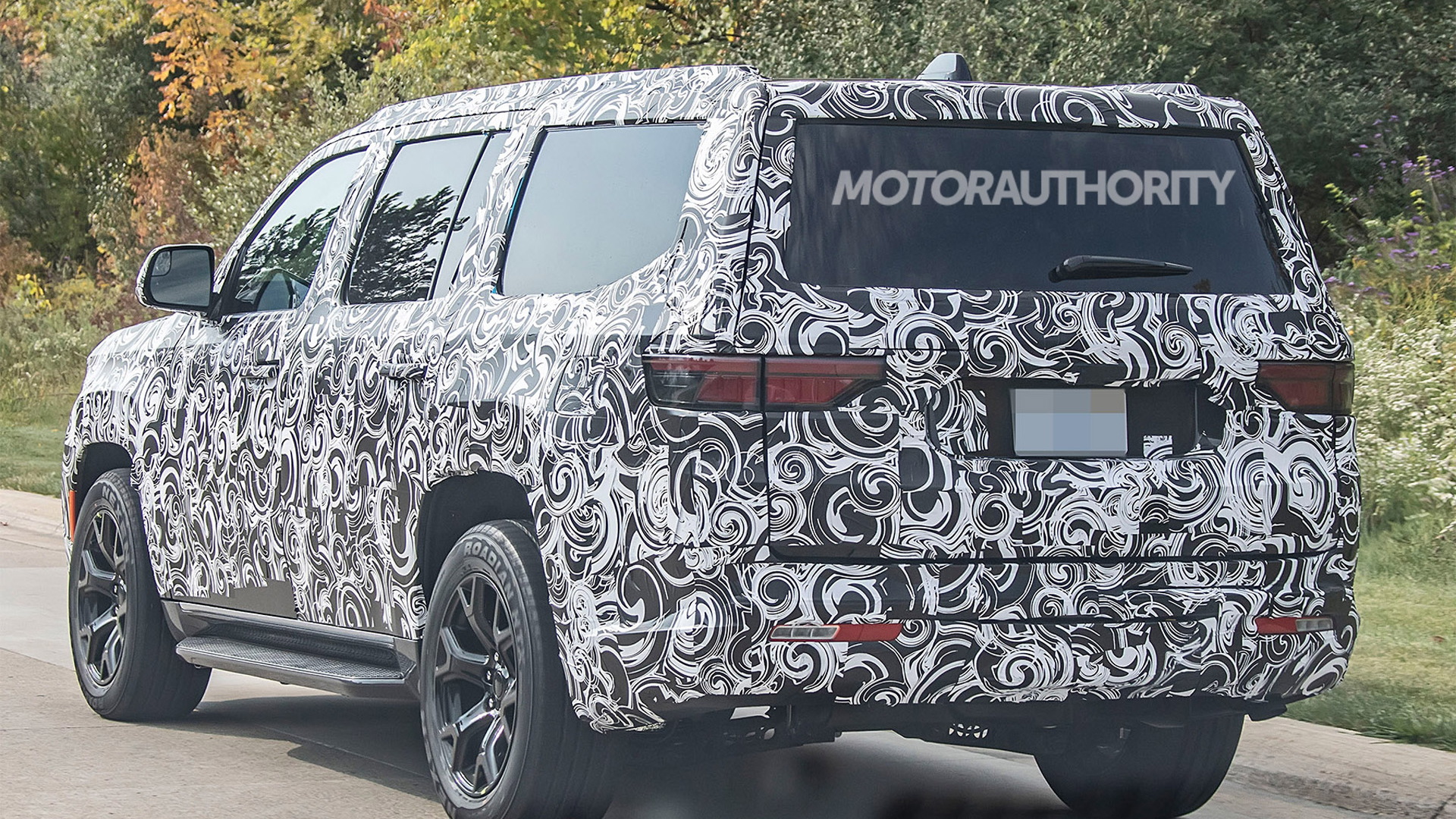 Jeep's readying a large, upmarket SUV to take on the likes of the Cadillac Escalade and Lincoln Navigator, and a prototype has just been spotted.

The new full-size SUV will revive Jeep's Wagoneer nameplate, and we were given a clear signal of the design with a concept version unveiled in September (shown below). Judging by the prototype, the production version will be remarkably similar to the concept.

Naturally there will be some differences. The production version swaps in simpler designs for the lights compared to the somewhat intricate units used on the concept. The grille and front fascia have also lost a lot of the chrome detailing of the concept.

The concept's full-length glass roof is also gone, though this was expected considering the glass had a map of metro Detroit etched into it. It does look like the concept's chunky greenhouse pillars will remain, though.

An earlier shot provides a glimpse of the interior which looks to feature a large infotainment screen in the center of the dash. This is likely the same 12-inch touchscreen display featured in the latest Ram 1500 pickup truck. Expect the Wagoneer's cabin to also be fitted with three rows of seats, providing space for seven or possibly eight.

There will be both a standard Wagoneer and extra-plush Grand Wagoneer, with the latter thought to be coming first. There will also be the choice of a stretched body similar to what Cadillac and Lincoln offer for their full-size SUVs, though this option could end up limited to the Grand Wagoneer. In range-topping guise, we could be looking at a price tag nudging $100,000.

The platform is the body-on-frame design found in the latest Ram pickups. The Wagoneer will feature independent rear suspension for adding comfort, and buyers will likely be able to choose between rear- or four-wheel drive.

Under the hood, the Wagoneer is likely to be offered with either a 3.6-liter V-6 and mild-hybrid setup or a 5.7-liter V-8 at launch. A plug-in hybrid setup was fitted to the concept, so we should see one in production, too. The jury is still out on whether we'll see a high-performance option packing the Hellcat 6.2-liter supercharged V-8. We know the Hellcat engine has been engineered for the platform, as it's already made an appearance in the new 2021 Ram 1500 TRX. An 8-speed automatic should be standard across the range.

Look for the new Wagoneer to arrive in 2021 as a 2022 model. Prior to its arrival, Jeep is expected to introduce a redesigned Grand Cherokee which this time around will have both two- and three-row options.

Production of the Wagoneer range will be handled at Fiat Chrysler Automobiles' Warren Truck Assembly plant in Warren, Michigan. The plant currently builds the previous-generation Ram 1500 but will eventually swap to the Jeep SUVs.

Jeep has never really offered an upmarket SUV but the brand name is well recognized, perhaps more so than some of its rivals in emerging markets. This provides FCA with an opportunity to introduce a high-end Jeep even though it’s not a category one would expect to see the brand compete in.

SUV sales continue to enjoy strong growth all around the globe, and about half of these sales are made up of luxury models, so understandably there is a number of automakers rushing to capitalize on the demand. Even the likes of Aston Martin, Bentley and Rolls-Royce have entered the segment.