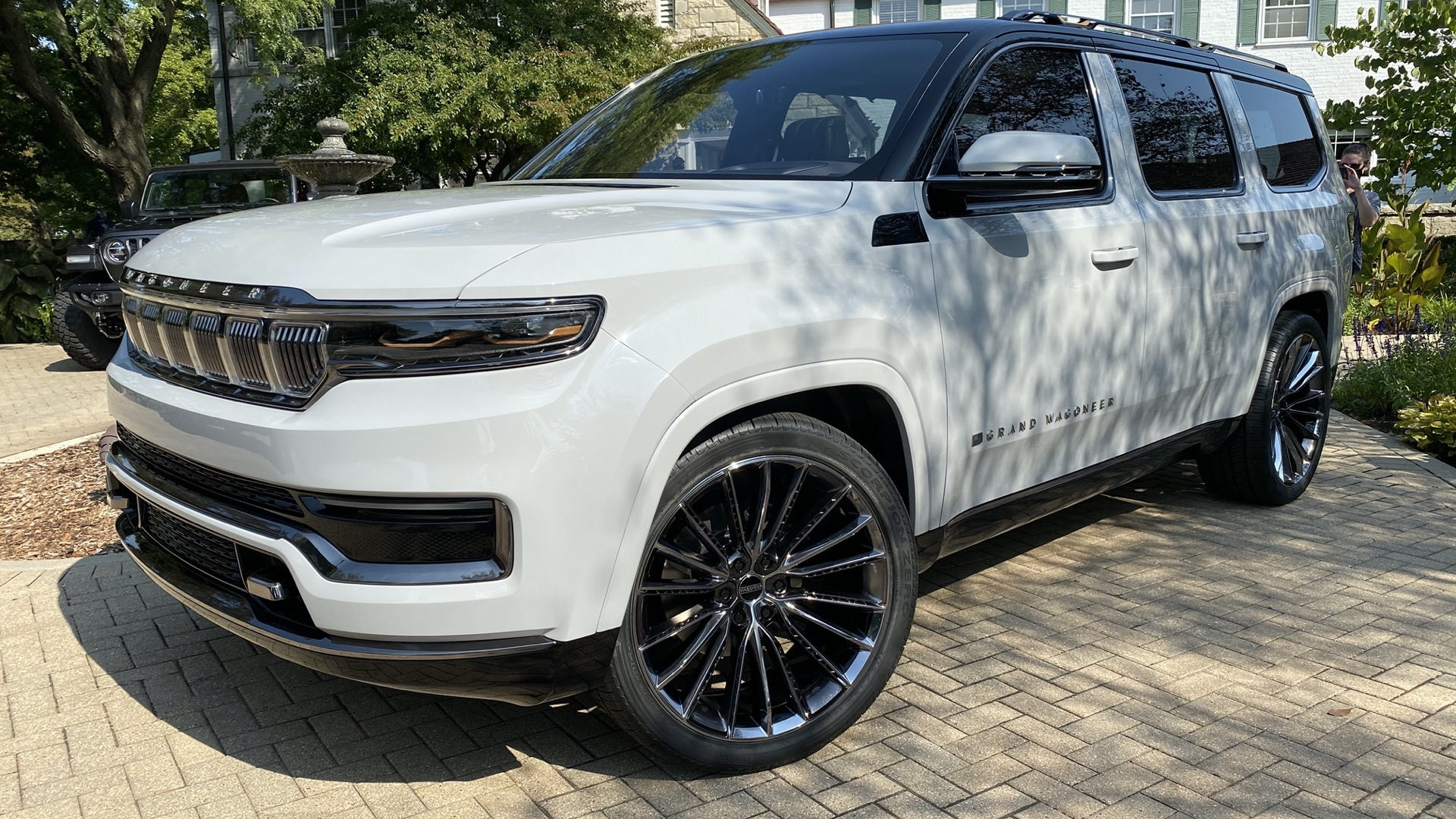 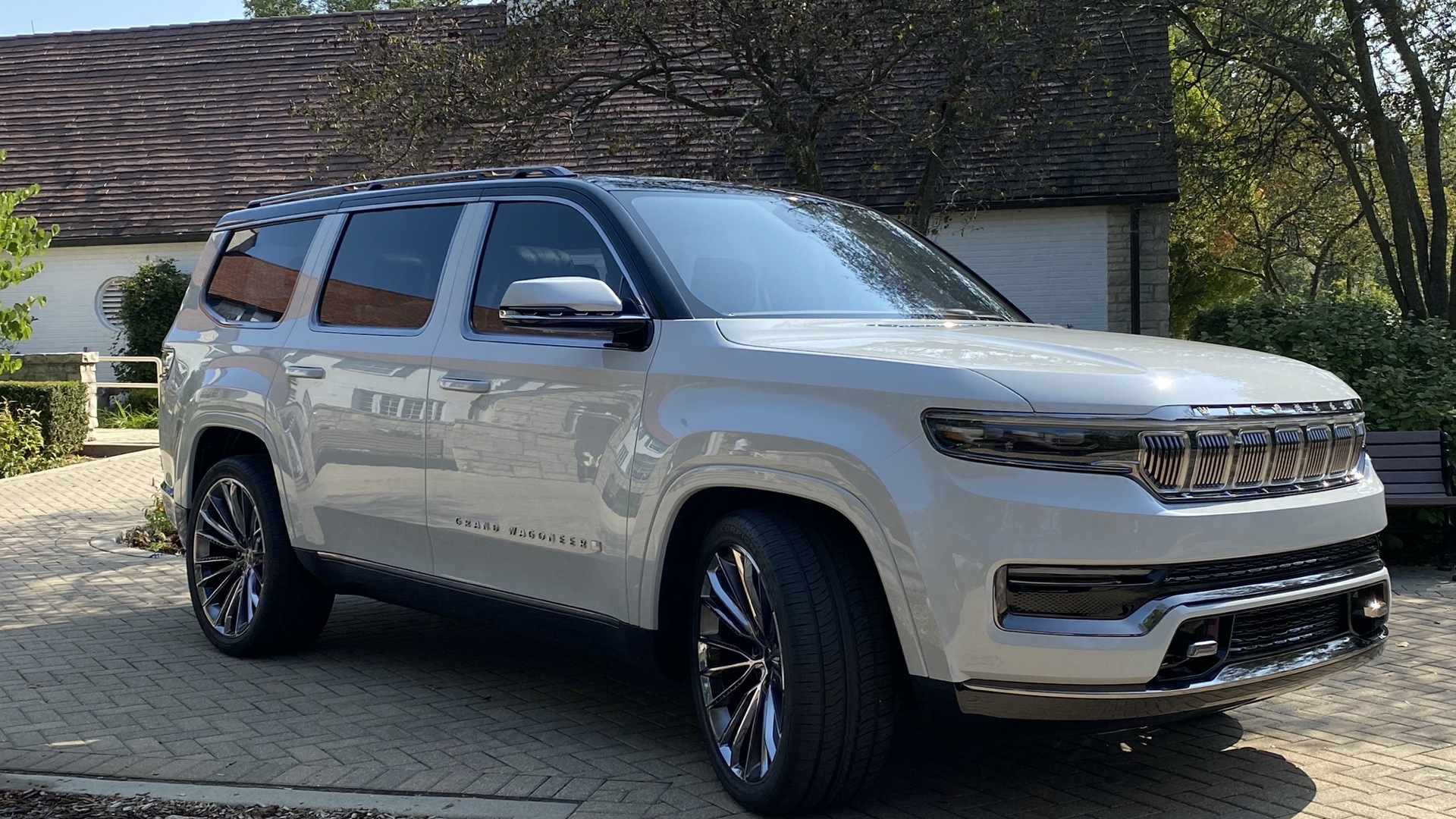 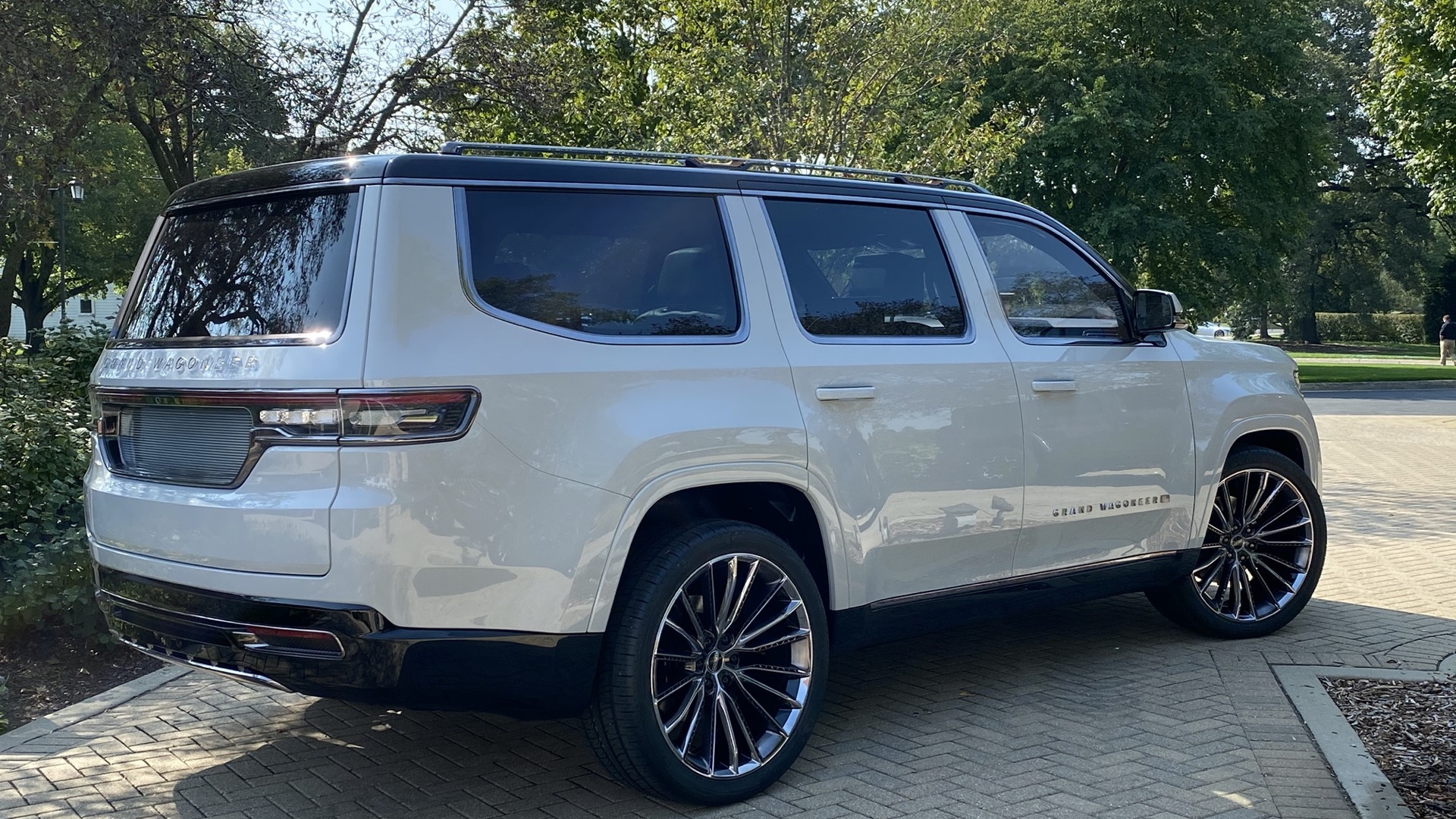 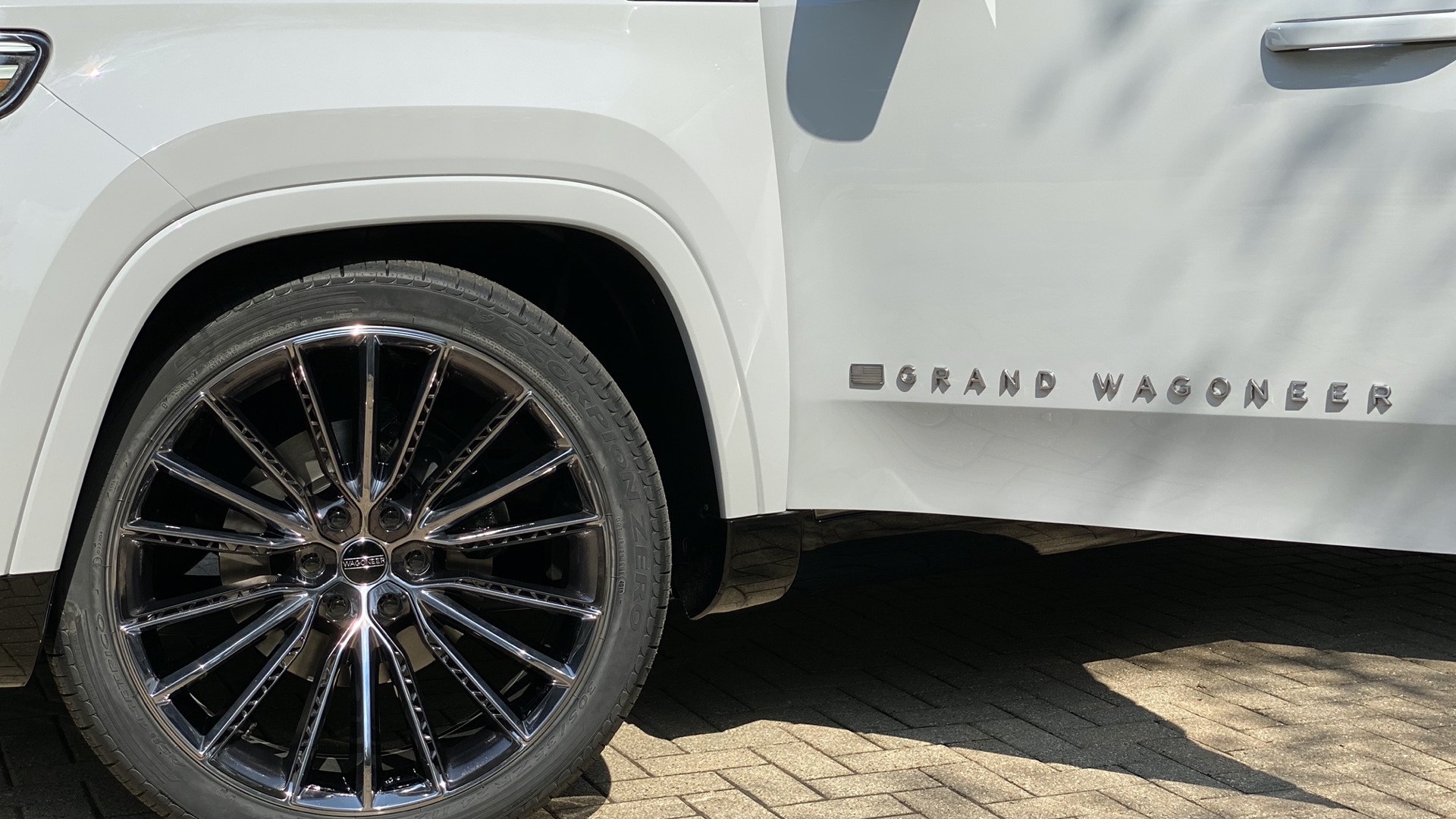 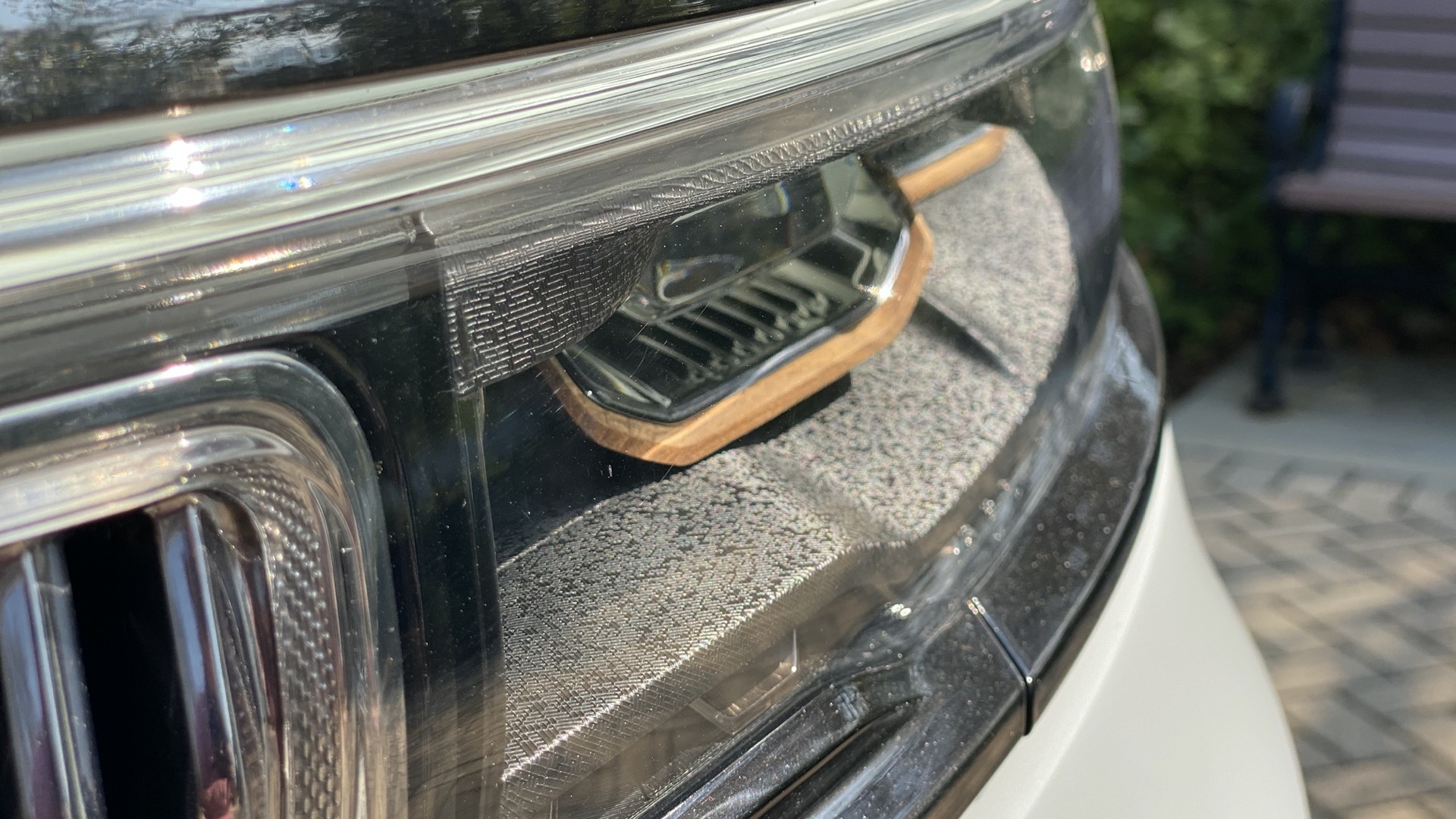 Wood may be the first thing the Jeep Grand Wagoneer brings to mind. The brutish wood-paneled battle wagons were ubiquitous in America’s driveways when Cyndi Lauper was a regular on Dick Clark’s countdown. The wood continued inside, too, with an ornately designed interior that was a step up from contemporary Jeeps and a leap ahead from Jeep’s 1970s everything.

For several years the only “wood” we could associate with the Grand Wagoneer anymore was “When would Jeep get off its duff and build one already?”

On Thursday, Jeep gave us an answer. Kind of.

The Jeep Grand Wagoneer released is called a “Concept”—an addendum that feels out of place not only because the SUV looks practically production-ready, but also because its styling and price are such departures that “concept” may be a low-hanging safety net.

The three-row Wagoneer concept released this week features a plug-in hybrid powertrain (no specs are available, however), three rows of seats, a panoramic sunroof with a metro Detroit roadmap etched in it, nearly four feet of screens for front seat riders alone, and an eye-watering price of more than $100,000 in top trims, according to Jeep’s global boss Christian Meunier.

To help justify that potential price the concept features a McIntosh sound system with 23 speakers and a 24-channel amplifier, 24-inch wheels, and 30 inches of screens for second-row riders, including dual 10.1-inch infotainment screens and a 10.3-inch climate control screen. Jeep isn’t just swinging for the fences, it’s swinging at high-dollar luxury automakers, too.

The specifics of what will shuttle down the Warren, Michigan, assembly line next year when the Grand Wagoneer is produced were kept close to Jeep’s vest this week. It’s not hard to imagine some, or all, of those luxury features fitting into the Grand Wagoneer’s spacious confines, but Jeep’s bosses were fairly specific on a few items.

Case in point: The Grand Wagoneer will top Jeep’s range, like it has in the past. A Wagoneer is surely in the mix, although long- and short-wheelbase versions of one or both may appear. The Grand Wagoneer Concept features few, if any, Jeep badges on the exterior. Perhaps that’s for a future segmentation of the luxury SUV—or just more mental distance between “$100,000” and “Jeep.”

The Grand Wagoneer will offer three four-wheel-drive systems and an available air suspension; the current Grand Cherokee offers the same. Jeep also said the production Grand Wagoneer will offer a four-wheel independent suspension and unmatched towing capacity. A plug-in hybrid powertrain is surely in the works, although it’s unclear if that will arrive when the first models roll off lines next year.

The Grand Wagoneer is distinguished not only by its price and amenities, but also its looks. Chief designer Ralph Gilles said the Grand Wagoneer’s looks will be the “memorable part of years to come” for Jeep, which sets the table for how dramatic the concept looks compared to current offerings.

The Jeep regulars appear: seven-slot grille, trapezoidal wheel arches, and Easter eggs among them. Where the Grand Wagoneer swings hardest is in its tiered face and horizontal lines. The grille slats are comparatively shorter than other Jeeps, an LED strip spans the considerable width of the vehicle and the body-colored front insert occupies significant real estate in the Wagoneer’s snout.

Along the sides, a high beltline drops down to a low crease that runs along the bottom of the Grand Wagoneer, on top of darker sills that raise the considerable visual heft. The 24-inch wheels don’t look huge in the wheel arches—we’re surprised we just typed that, too. The arches are squared off and creased for a tougher look. Undoubtedly, the most significant design elements are the windows, which are framed by thick B, C, and D pillars that may be the Grand Wagoneer’s calling card.

“If we blacked out the C and D pillars, it’d look like everyone else,” Gilles said.

Around back, the Grand Wagoneer’s large tailgate is framed by a very square rear window, a thin strip of LED lights, and horizontal brake and turn lights. The Grand Wagoneer Concept doesn’t brag about its power; the tailpipes aren’t visible.

The black contrast roof on the Arctic White body is another curiosity, and another departure from the classic that had a body-colored roof on most models.

Inside, the concept’s seven available seats are swathed in aubergine leather, decorated with diamond-pattern inserts, and bathed in ambient LED lights. The big windows are a boon to interior light—that is, when passengers aren’t staring at the screens in front of their faces.

Jeep added a two-spoke steering wheel unique to the Grand Wagoneer that sits in front of a 12.3-inch digital instrument cluster. The aluminum-accented wing-shaped dash cradles a 12.1-inch infotainment touchscreen that’s perched above a 10.3-inch climate control touchscreen. The front passenger gets his or her own screen, too—10.3 inches—that sits above a “Grand Wagoneer” badge inlaid into lacewood.

It’s a far cry from the Grand Wagoneer’s 1984 debut, although there are a few heritage cues: The headlights are cradled in teak wood and exposed tie-down loop openings are finished in teak, too.

It might not be the wood we expected, but there’s the wood we’ve been waiting for in the new Grand Wagoneer.