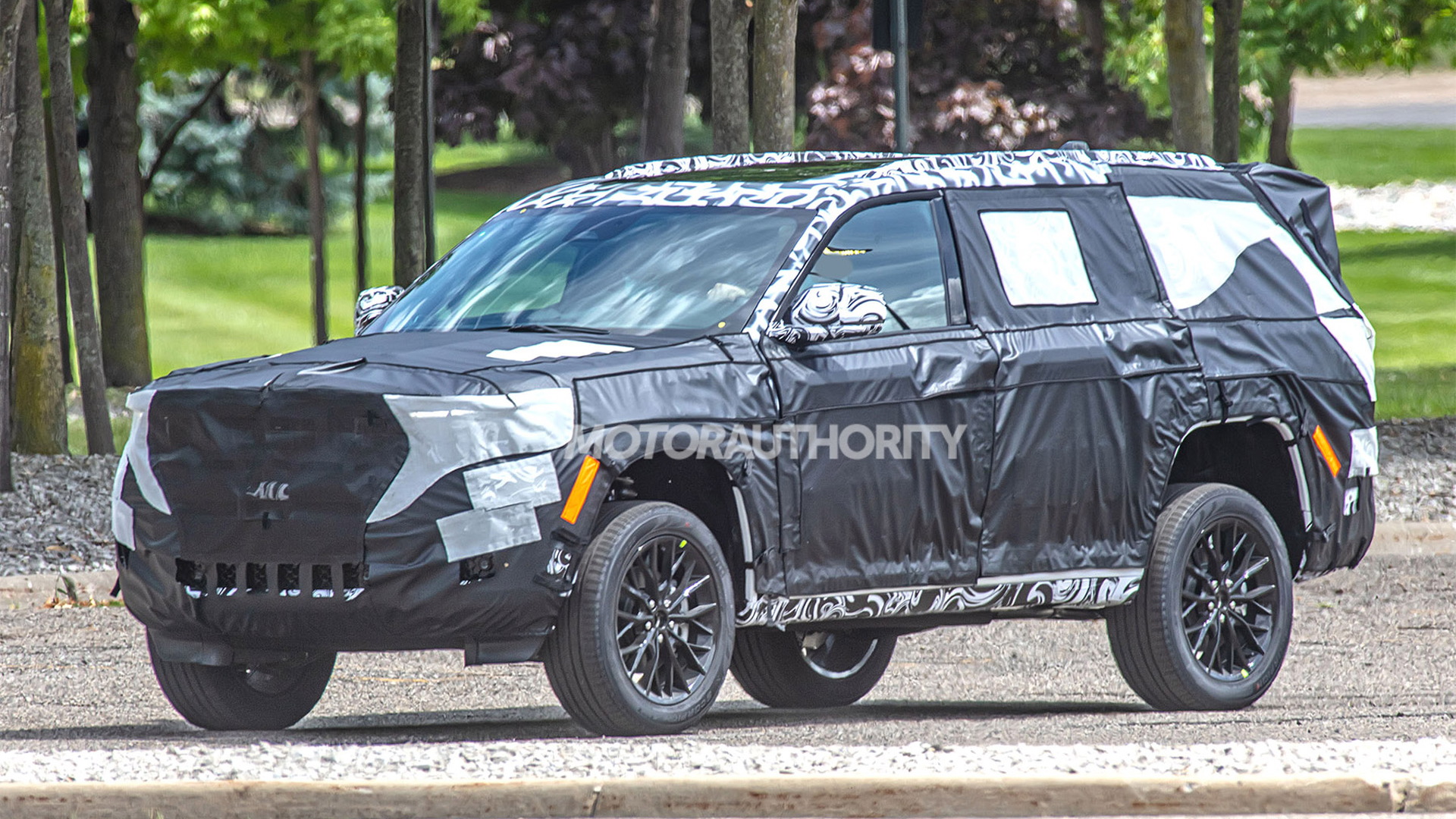 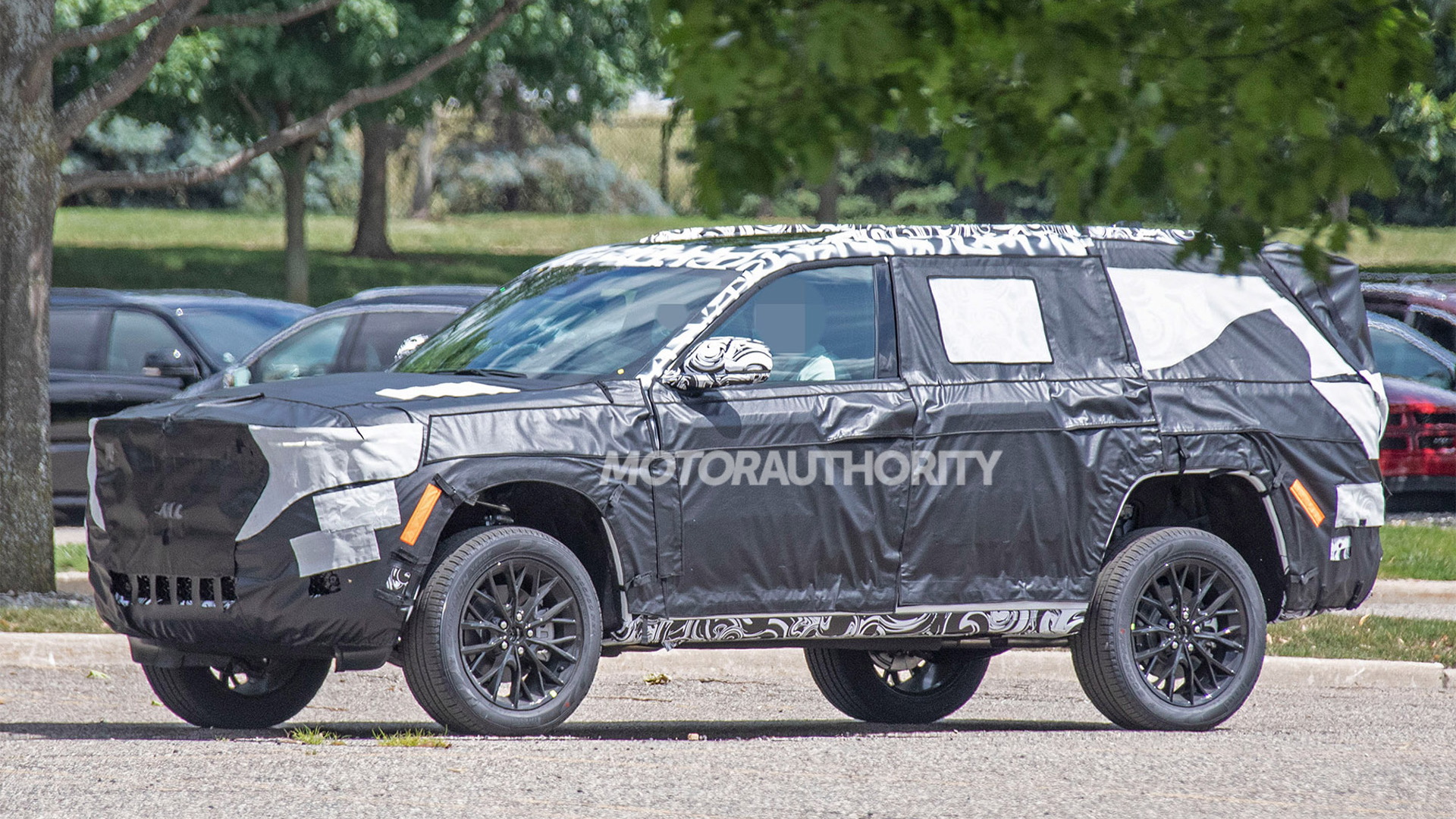 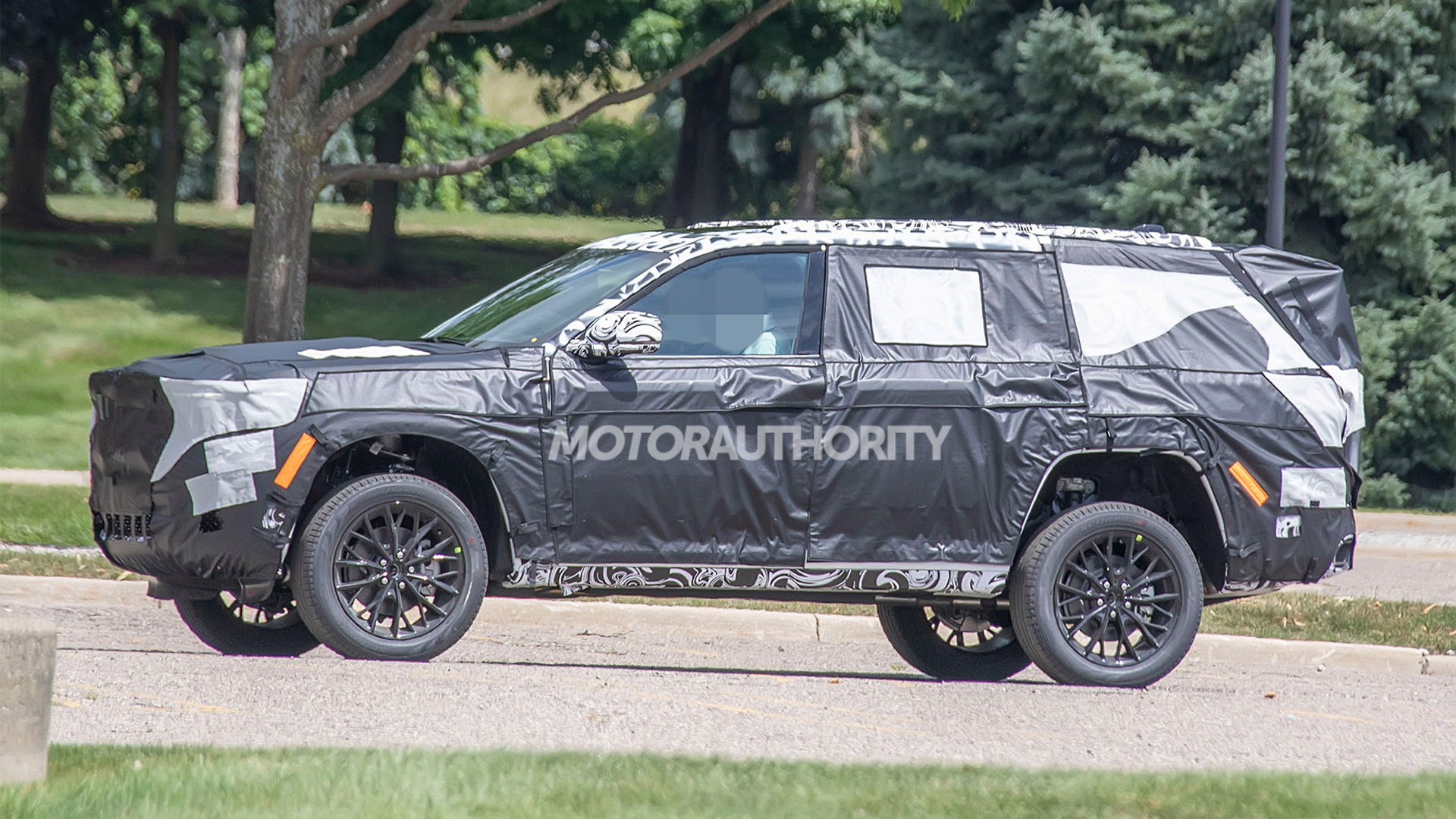 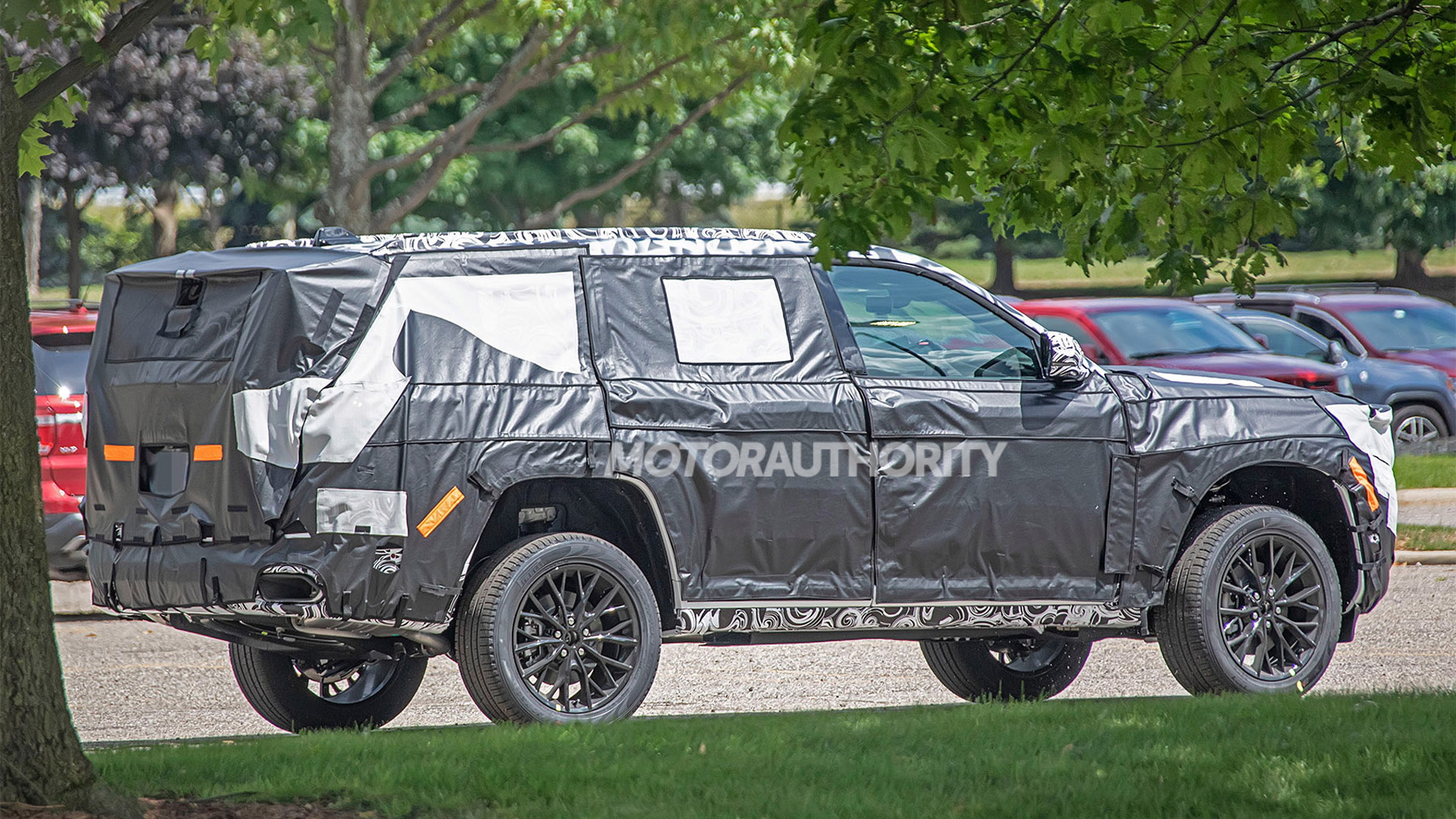 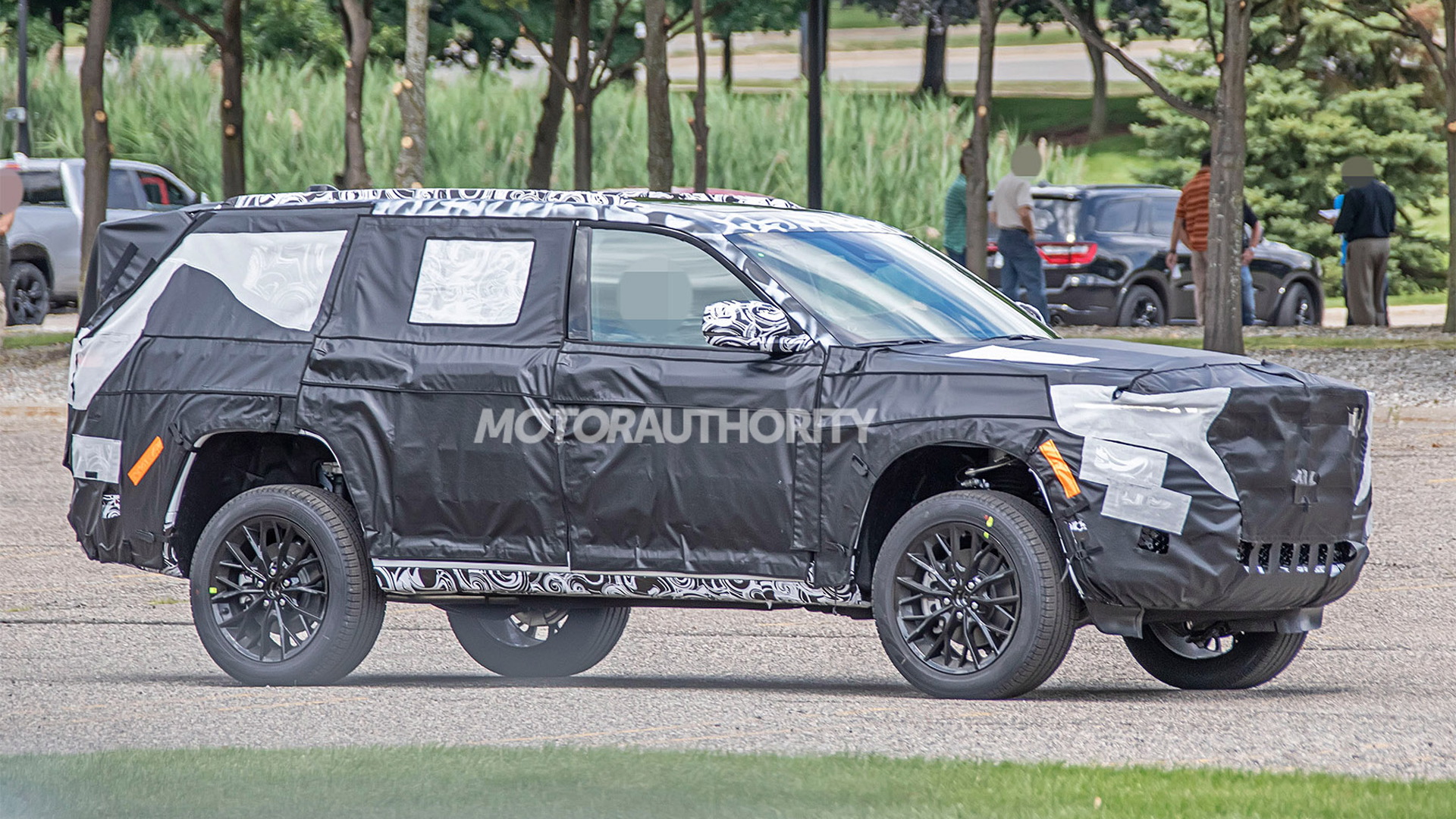 A three-row Jeep SUV based on the next-generation Grand Cherokee has been spotted testing in prototype form.

The vehicle is not to be mistaken for the long-awaited Wagoneer and Grand Wagoneer duo that will ride on the full-size, body-on-frame platform of the latest Ram 1500 pickup truck. Rather, it will be a new mid-size contender to sit alongside the Grand Cherokee which will stick with two rows with its redesign.

There could be a new name, though, a bit like how Jeep uses a separate name for the Gladiator pickup truck even though the vehicle is based on the Wrangler.

Comparing the latest spy shots with earlier shots for the redesigned Grand Cherokee, the three-row SUV will feature similar styling at the front to its smaller sibling. The three-row SUV looks to have a longer rear door and storage compartment. There could also be a longer wheelbase, and we can see in some of the shots that the suspension will be capable of delivering a lot more ground clearance than the outgoing Grand Cherokee's 10.8 inches.

According to parent company Fiat Chrysler Automobile's most recent plan for Jeep announced in 2018, the redesigned Grand Cherokee—and thus the new three-row SUV—will ride on a modified version of the Alfa Romeo Stelvio's platform and feature advanced self-driving technology. Electrification will also play a key role, with a plug-in hybrid setup expected to be among the powertrain options. Jeep's plug-in hybrid technology, referred to as 4xe, has already been announced for the Wrangler, Compass and Renegade.

The redesigned Grand Cherokee and the new three-row SUV are expected to be revealed early next year as 2022 models (sales are likely to start in late summer or fall 2021). Production will be handled at a repurposed Mack Avenue Engine Complex in Detroit. Jeep will also use the nearby Jefferson North Assembly Plant for additional Grand Cherokee production.

The Wagoneer and Grand Wagoneer will then follow later 2021, also as 2022 models. The Escalade and Navigator rivals will be built at FCA's underutilized Warren Truck Assembly plant just north of Detroit.

Interestingly, FCA will continue to offer the Dodge Durango in the mid-size segment. This three-row SUV is about to receive a refresh meaning it will likely be offered for years to come.