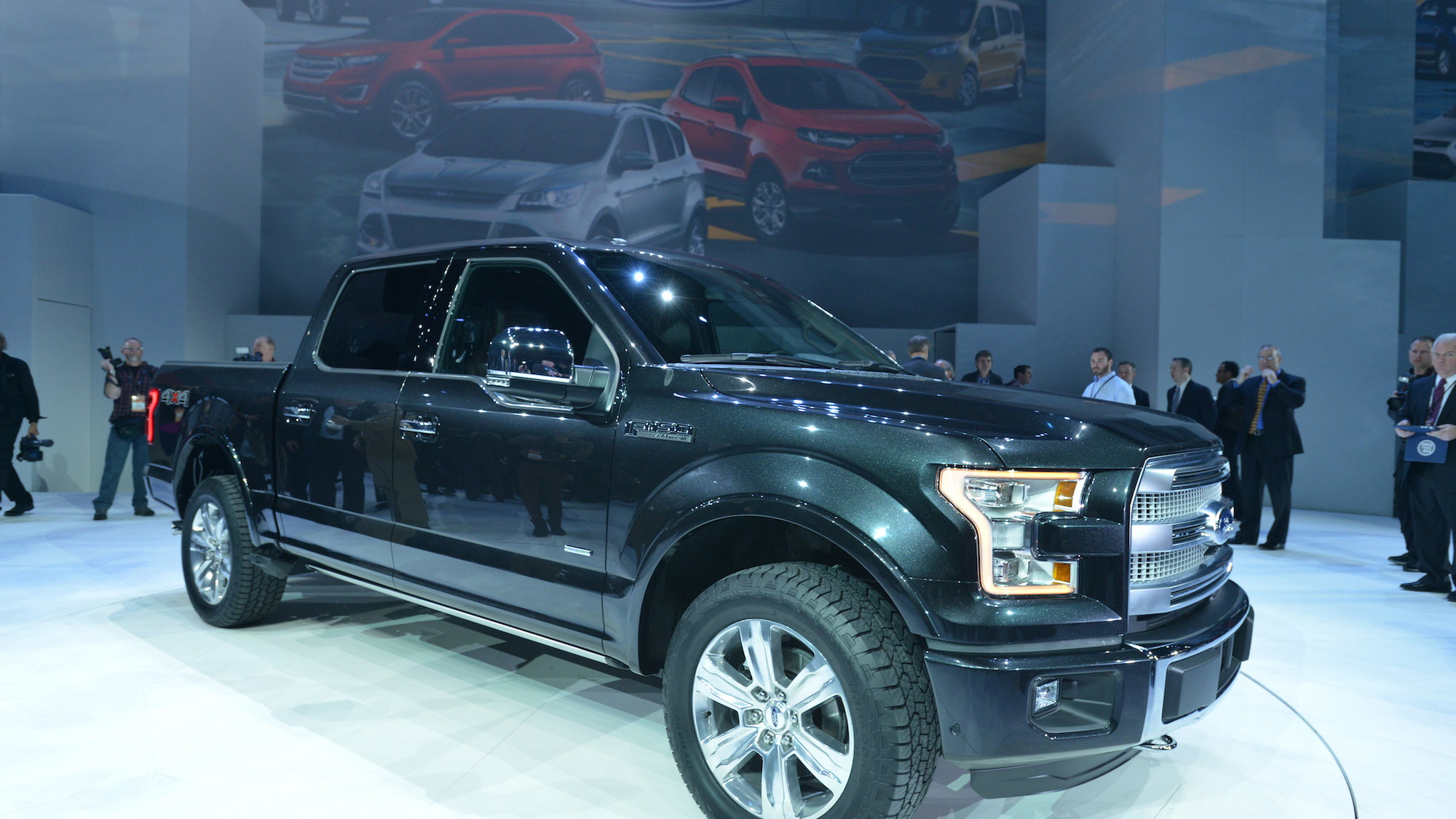 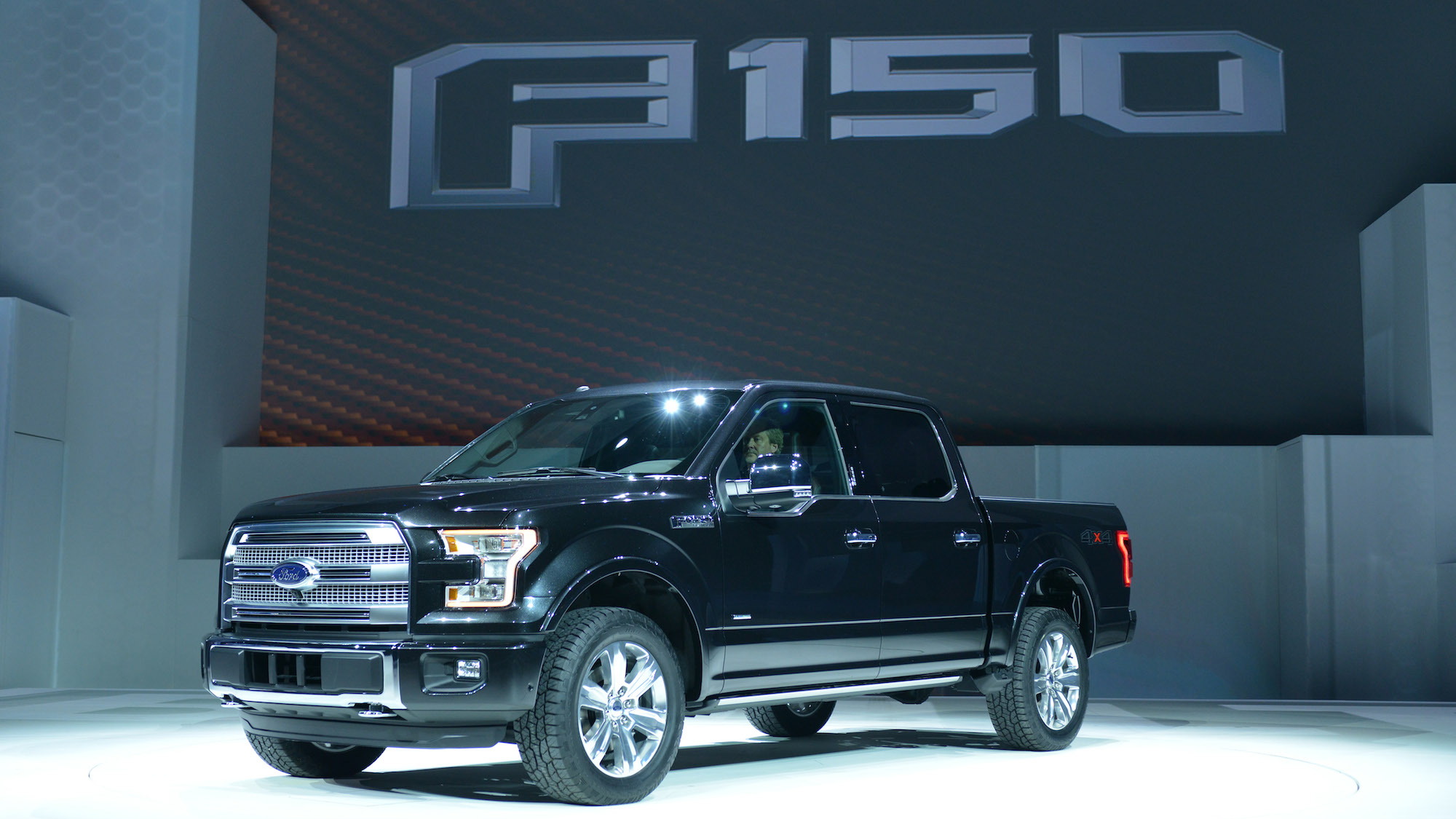 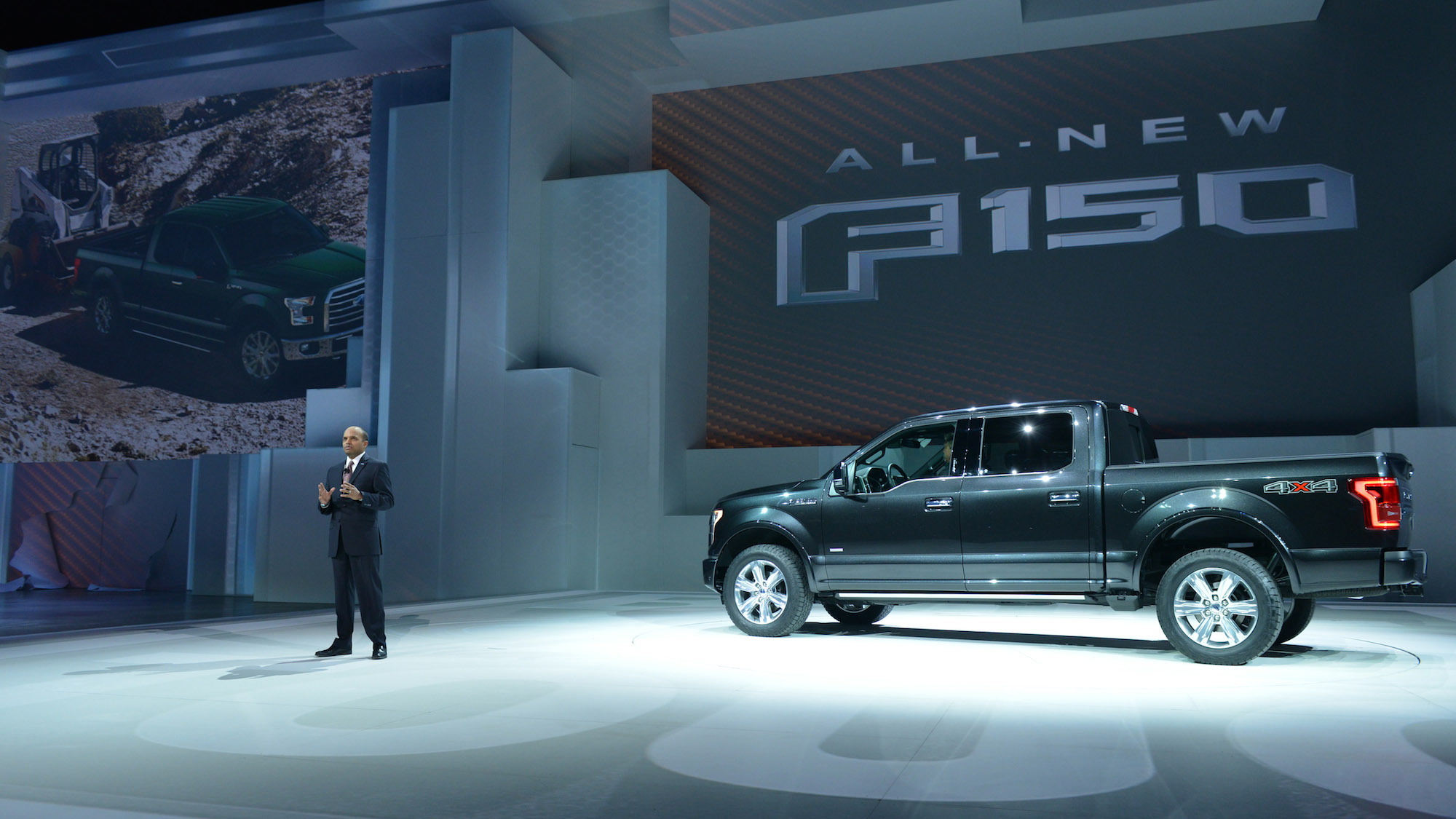 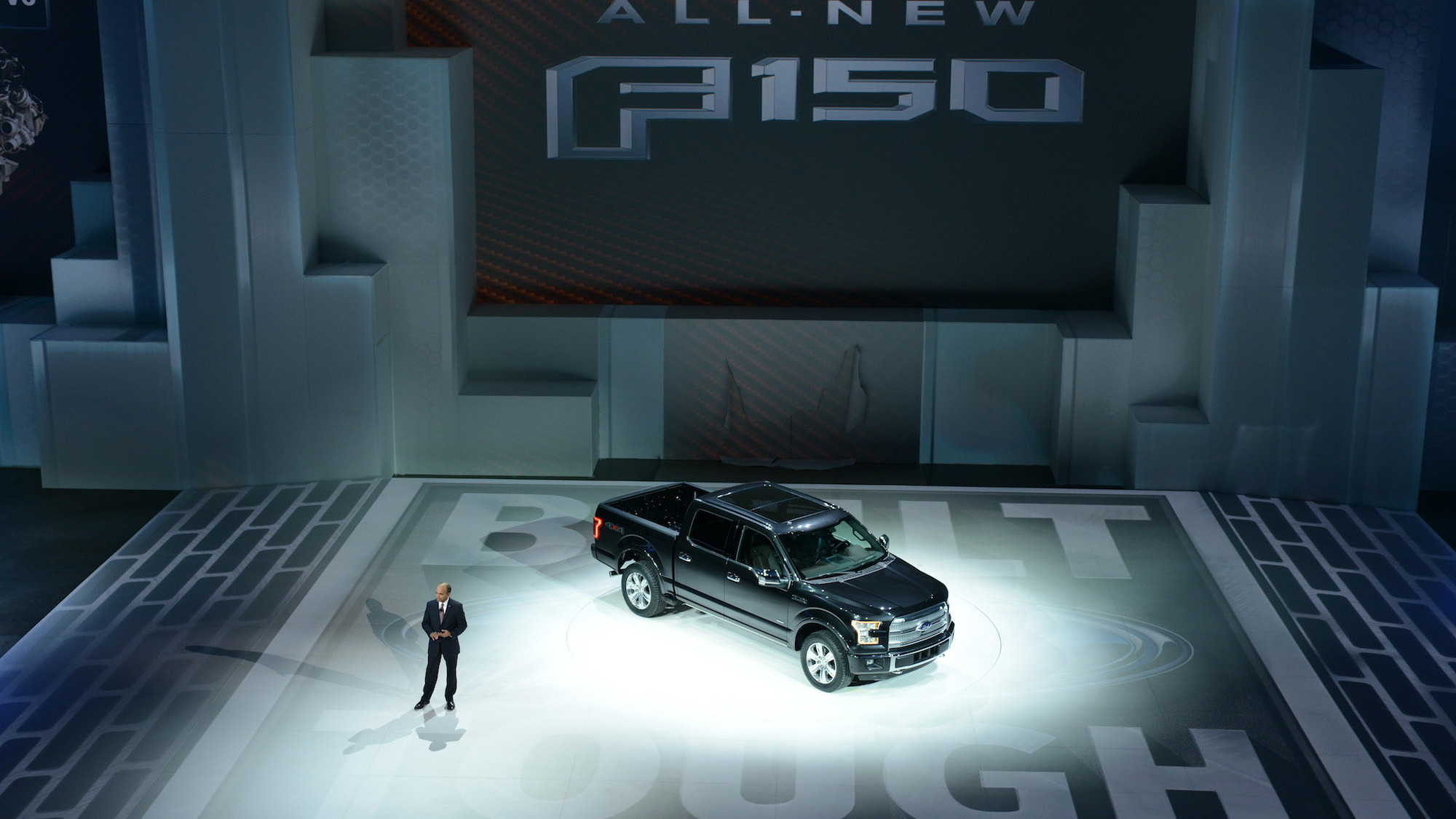 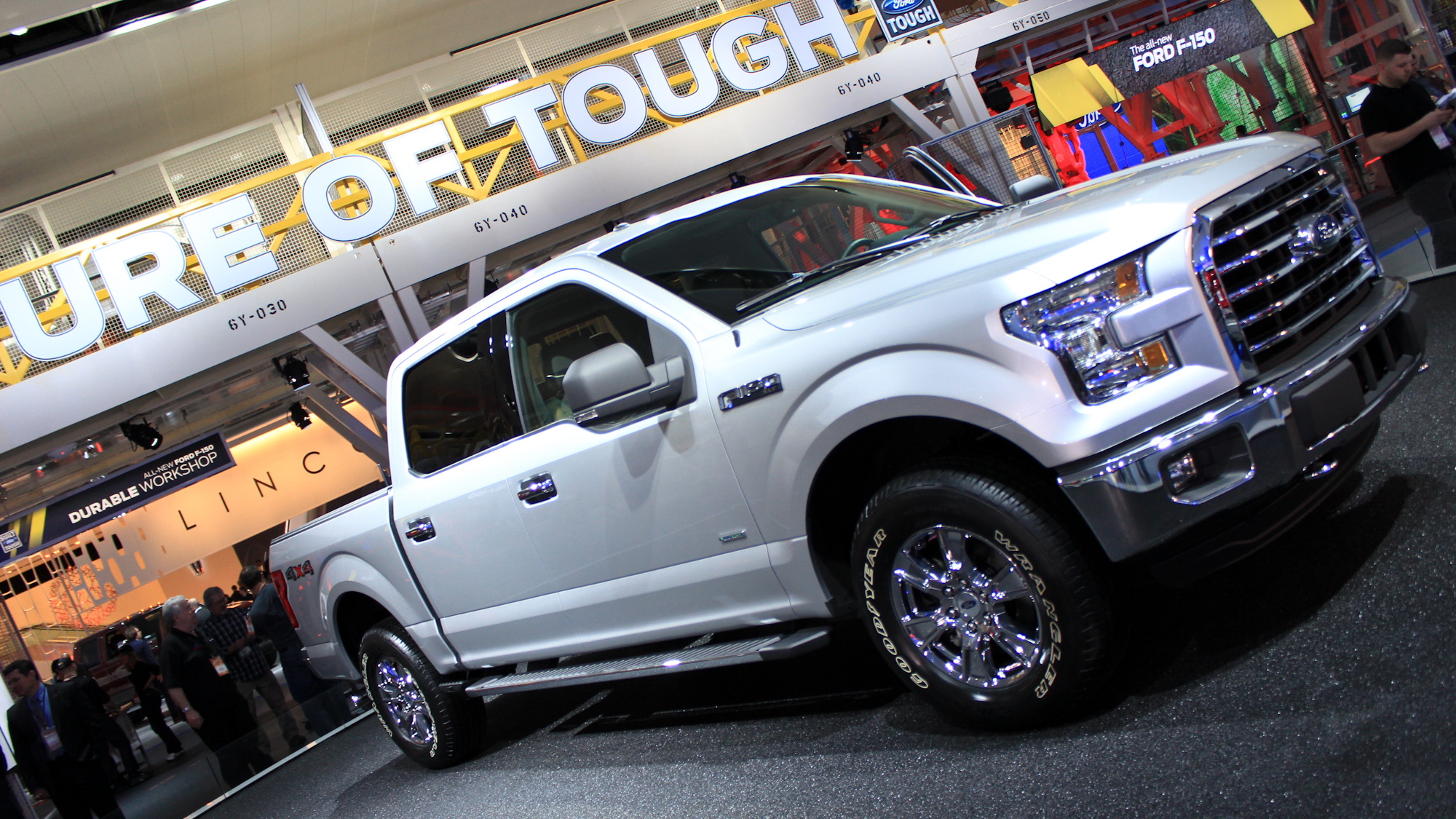 44
photos
The all-new 2015 Ford F-150 pickup truck, the latest version of America’s best-selling vehicle, has been revealed on the eve of the 2014 Detroit Auto Show. The new workhorse is radically different to anything we’ve seen before in the full-size pickup market, as it features a body that’s mostly aluminum and an available engine that displaces just 2.7 liters.

In designing the backbone of the F-150, Ford Motor Company [NYSE:F] engineers improved the truck’s signature fully boxed ladder frame, which now incorporates high-strength steel to make it stronger and lighter. Aluminum, featuring a similar grade to that used in the military and aerospace industry, has been applied to the body, helping to save upwards of 700 pounds from the curb weight.

In the engine department, buyers of the 2015 F-150 have four options to choose from. New to the F-150 nameplate is a 2.7-liter EcoBoost V-6 engine. This engine will also come with a stop-start system to further save fuel  and is said to be comparable with “mid-range V-8s” in the power stakes thanks to turbocharging and direct-injection technologies. Fuel economy for the highway is tipped to be as much as 30 mpg.

Separately, a new 3.5-liter naturally aspirated V-6 functions as the base engine for the lineup, and is joined by a 3.5-liter EcoBoost unit as well as a 5.0-liter V-8. The standard transmission across the range is a six-speed automatic.

The rolling chassis otherwise bears no surprises as great as the materials up above; with its front coil-on-shock and double-wishbone setup, and Hotchkiss-type live setup with leaf springs in back, it’s all conventional. Steering is handled by rack-and-pinion gear, with electric boost, and there are four-wheel vented disc brakes.

You can bet a Baja-inspired SVT Raptor variant is waiting in the wings. In developing the new 2015 F-150, Ford even ran a disguised prototype in the Baja 1000. In the interim, an FX4 Off-Road package will have to suffice, bringing skid plates, off-road-tuned shocks, and an electronic locking rear axle.

Fuel economy, power outputs and pricing for the Ford F-150 will be revealed closer to the vehicle’s launch later in the year, but you can also gather more details from the extensive preview over at the The Car Connection.