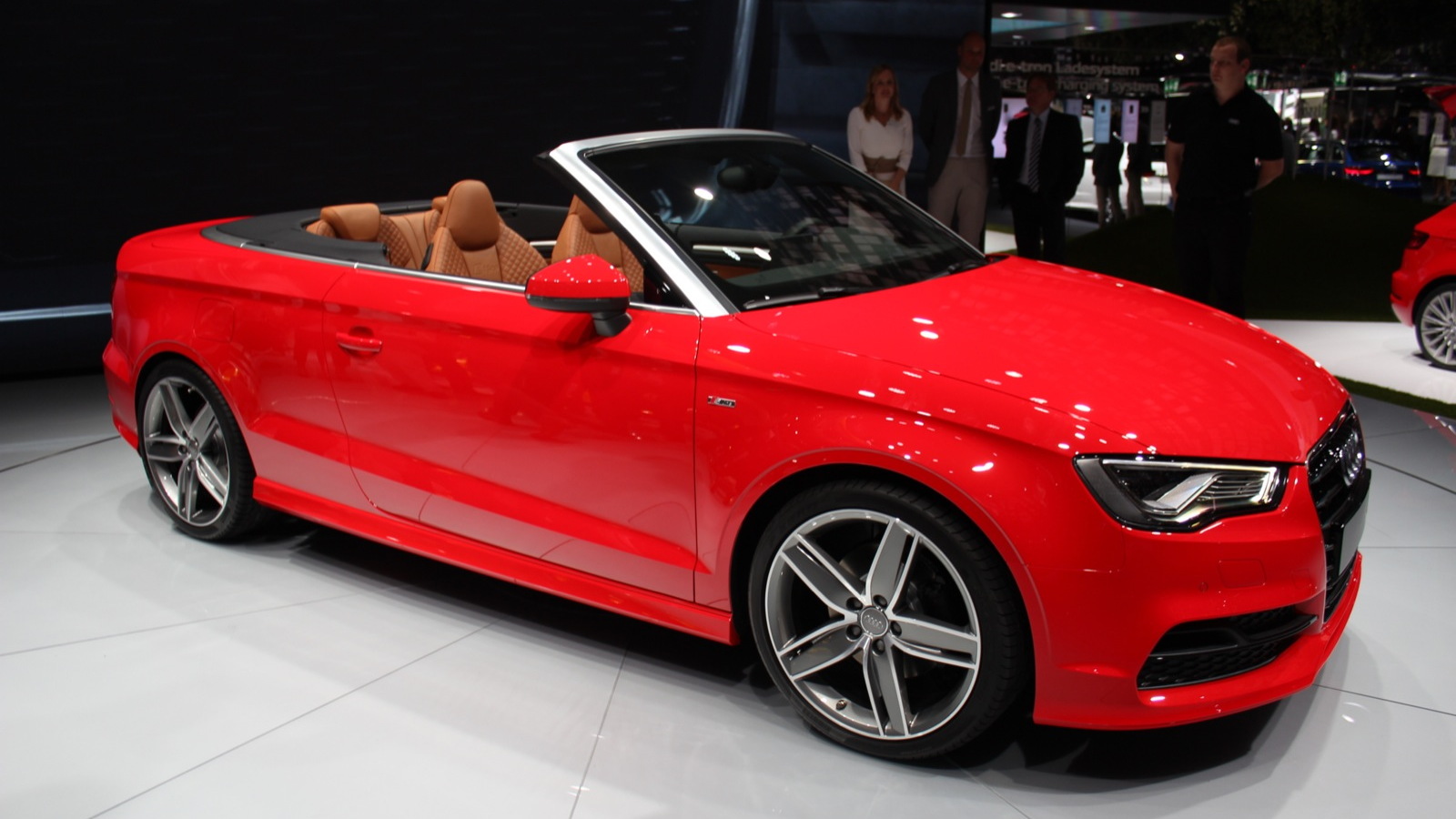 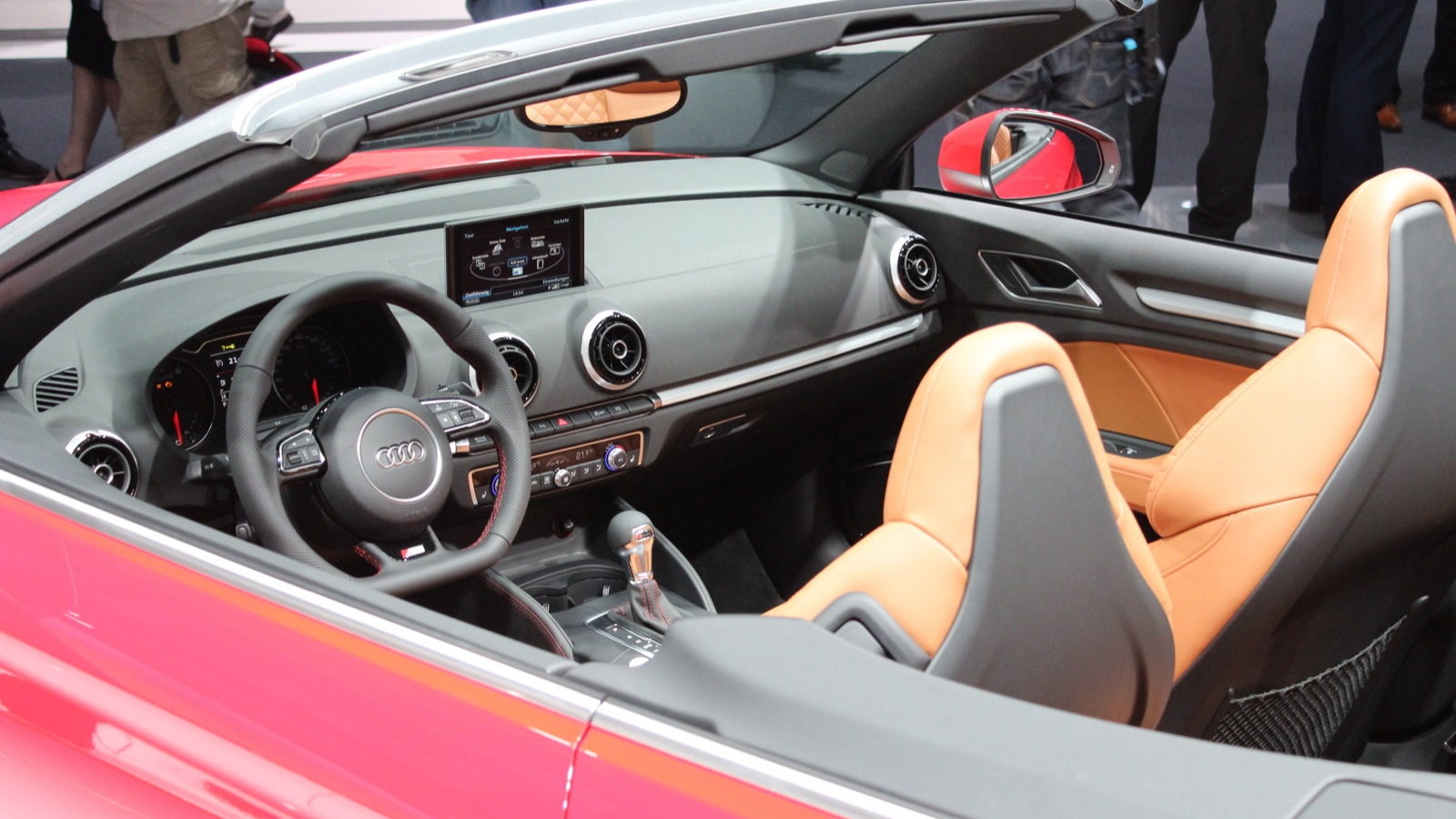 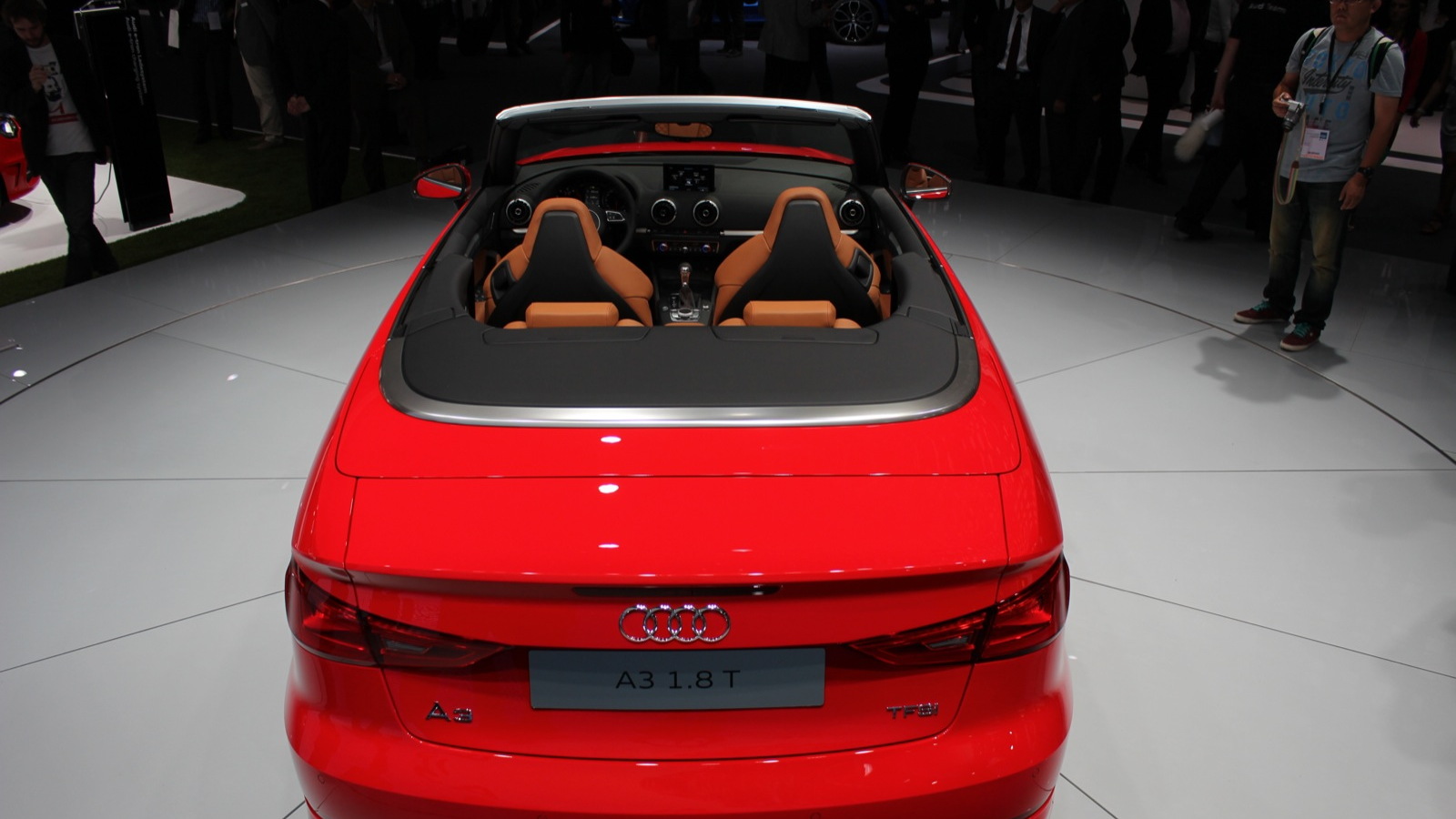 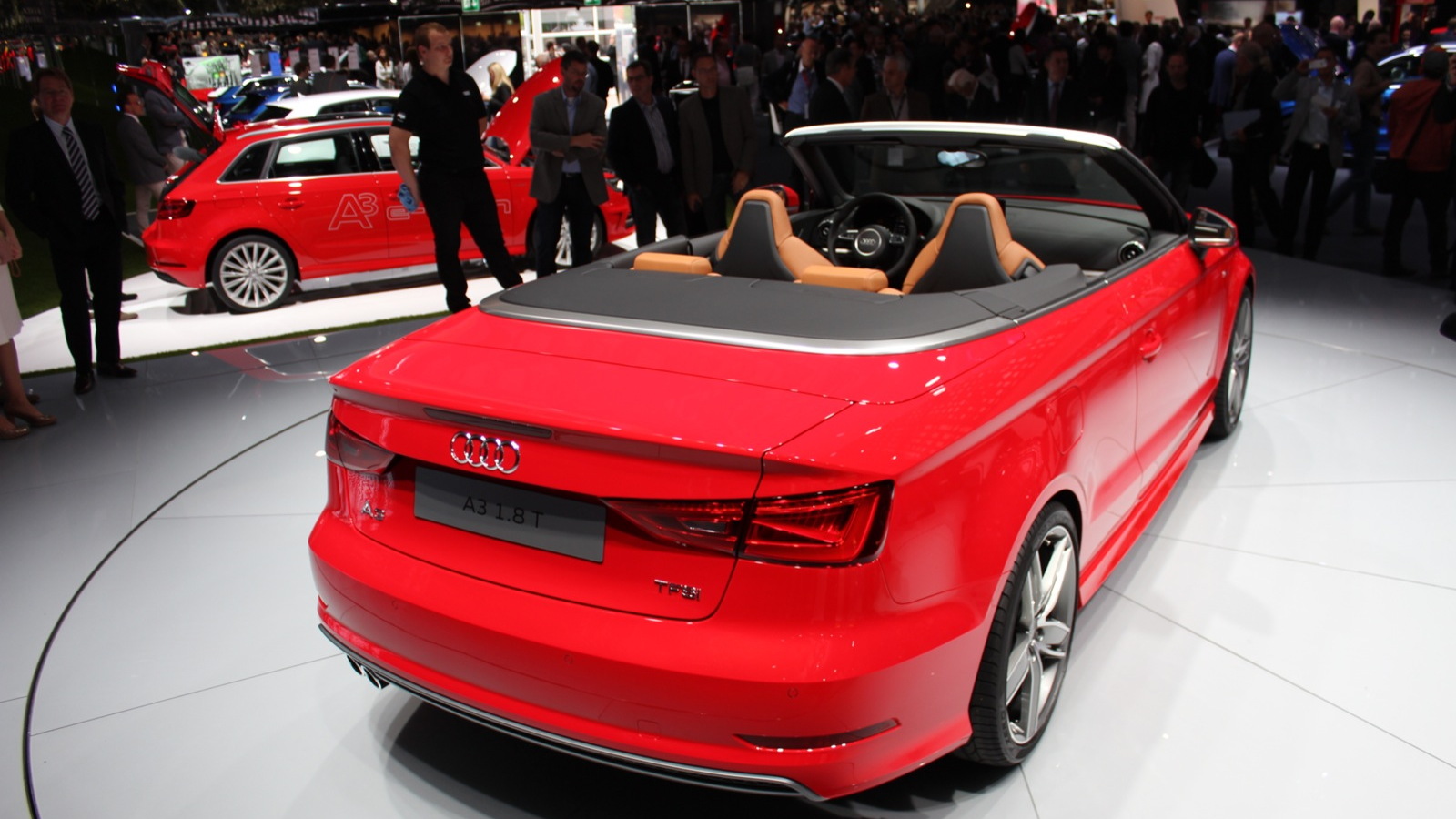 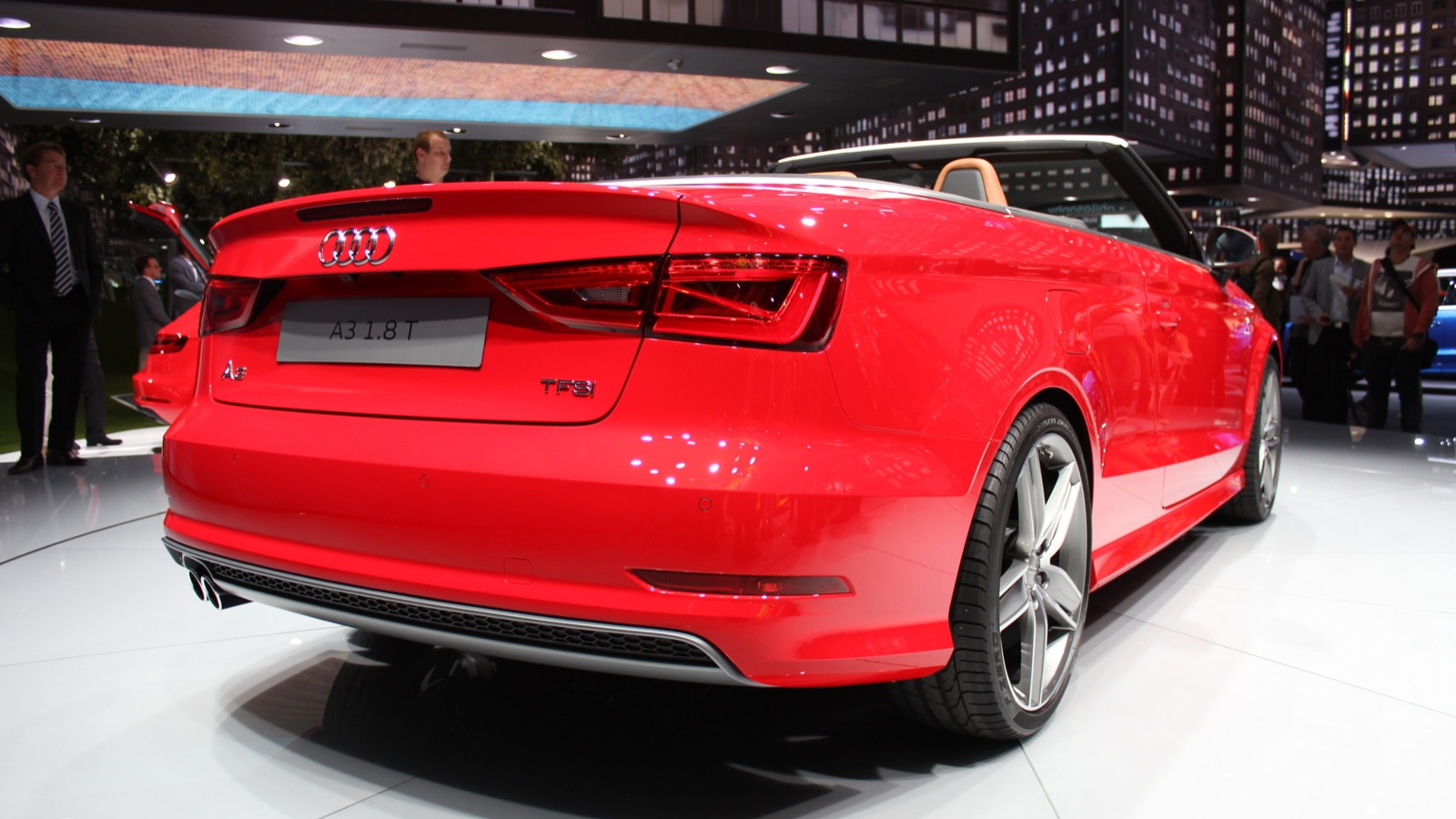 20
photos
A stylish new Audi A3 Cabriolet (convertible) has officially made its debut at the 2013 Frankfurt Auto Show. In addition to that, it's U.S.-bound and will be part of the 2015 Audi A3 lineup.

Audi officials have confirmed that the A3 Cabriolet will be offered in U.S. showrooms beginning in fall 2014, with both the 1.8- and 2.0-liter turbocharged four-cylinder engines available for drop-top versions (though sorry diesel fans, no diesel Cabriolet).

This is actually the second generation of the A3 Cabrio, with the original proving quite popular in the markets where it was sold. The new model has grown slightly, stretching 14.5 feet in length compared to the previous model’s 13.9 feet, and this has resulted in more space in the cabin as well as extra storage in the trunk. For performance fans, Audi says the bigger size also allows wheels ranging up to 19 inches in diameter to be fitted for the first time.

In terms of styling, the A3 Cabrio is virtually identical to other 2015 Audi A3 models up until its A-pillar, after which much of its sheet metal is unique. Underpinning the car is the Volkswagen Group’s flexible MQB platform, which also underpins the 2015 Volkswagen Golf and the rest of the A3 range.

A key advantage of the MQB is lightweight design, which should make the new A3 Cabrio more fuel-efficient as well as more dynamic than the outgoing model. The lightest variant tips the scales at 3,009 pounds, around 110 pounds less than the outgoing car.

The roof is an automated soft-top and requires just 18 seconds to go up or down, even at speeds of up to 31 mph. It has a glass rear window and comes in several colors, though black is standard. An active rollover protection system protects the occupants in case of a rollover accident. It consists of two spring-loaded plates that are recessed into the body.

Inside, you’ll find a cockpit that’s common across the A3 range. Owners will be treated to nice round dials and air vents, plus plenty of leather.

Audi's latest MMI interface system handles the media and navigation functions, with displays of either 5.8 or 7 inches available. 4G LTE broadband connectivity is also offered. An optional lighting package includes a touch-sensitive switch for the reading lights--a feature being offered for the first time.

For Europe, the 2015 A3 Cabrio has so far been announced with 1.4- and 1.8-liter TFSI engines, delivering 140 and 180 horsepower, respectively. A 2.0-liter TDI is also offered, delivering 150 horsepower. Transmission options include a six-speed manual and seven-speed S tronic dual-clutch ‘box; we're not sure whether those will carry over to the U.S.

Audi is also planning a high-performance S3 Cabriolet, which likely won't be U.S.-bound. This will get the same 2.0-liter TFSI engine found in other S3 variants, good for 296 horsepower and 280 pound-feet of torque, as well as standard quattro all-wheel drive.

Sales of the 2015 Audi A3 Cabriolet begin in Europe this fall, then expect it in the U.S. about this time next year. In the meantime, catch up on the rest of our 2013 Frankfurt Auto Show coverage via our dedicated hub.