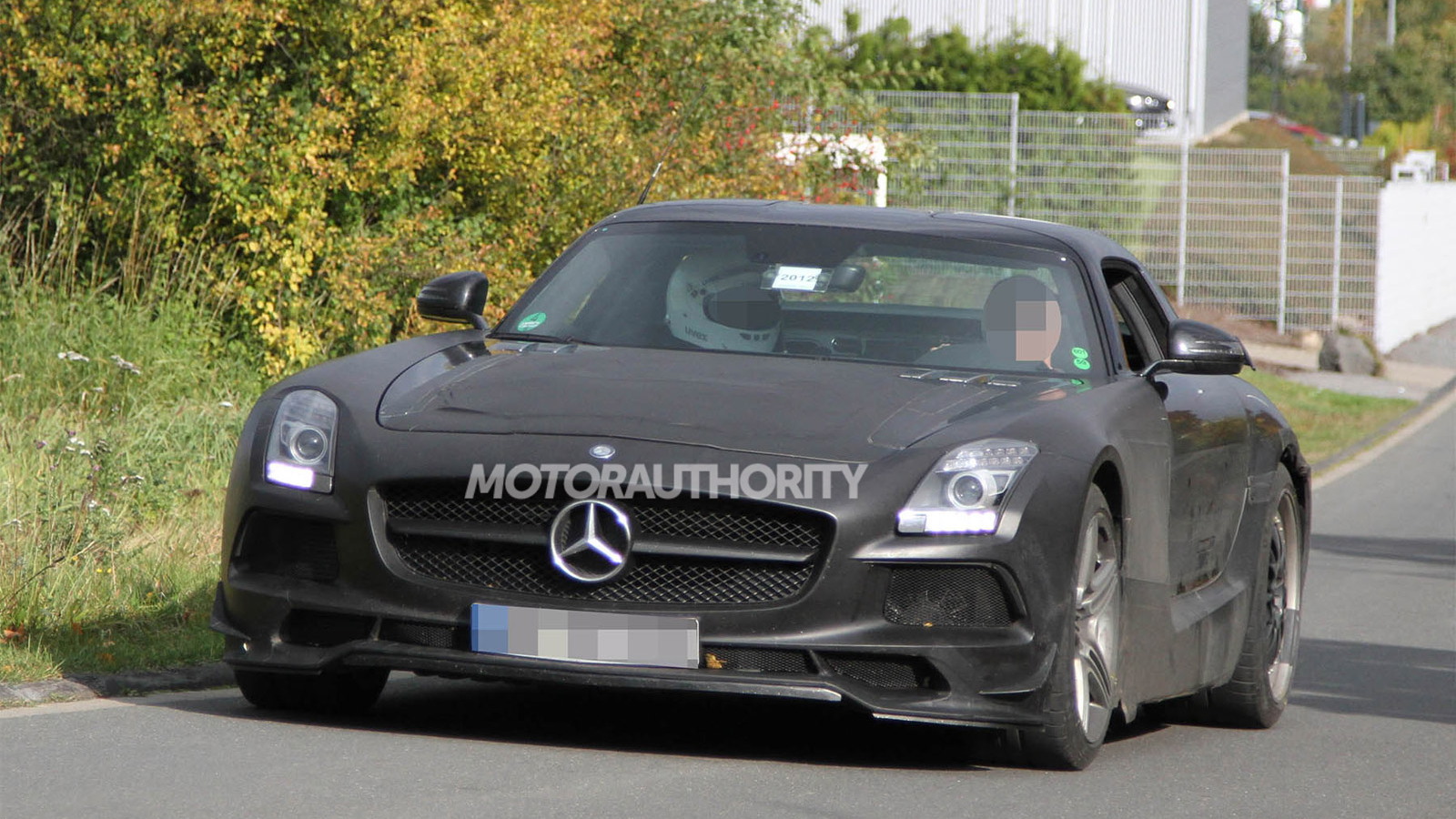 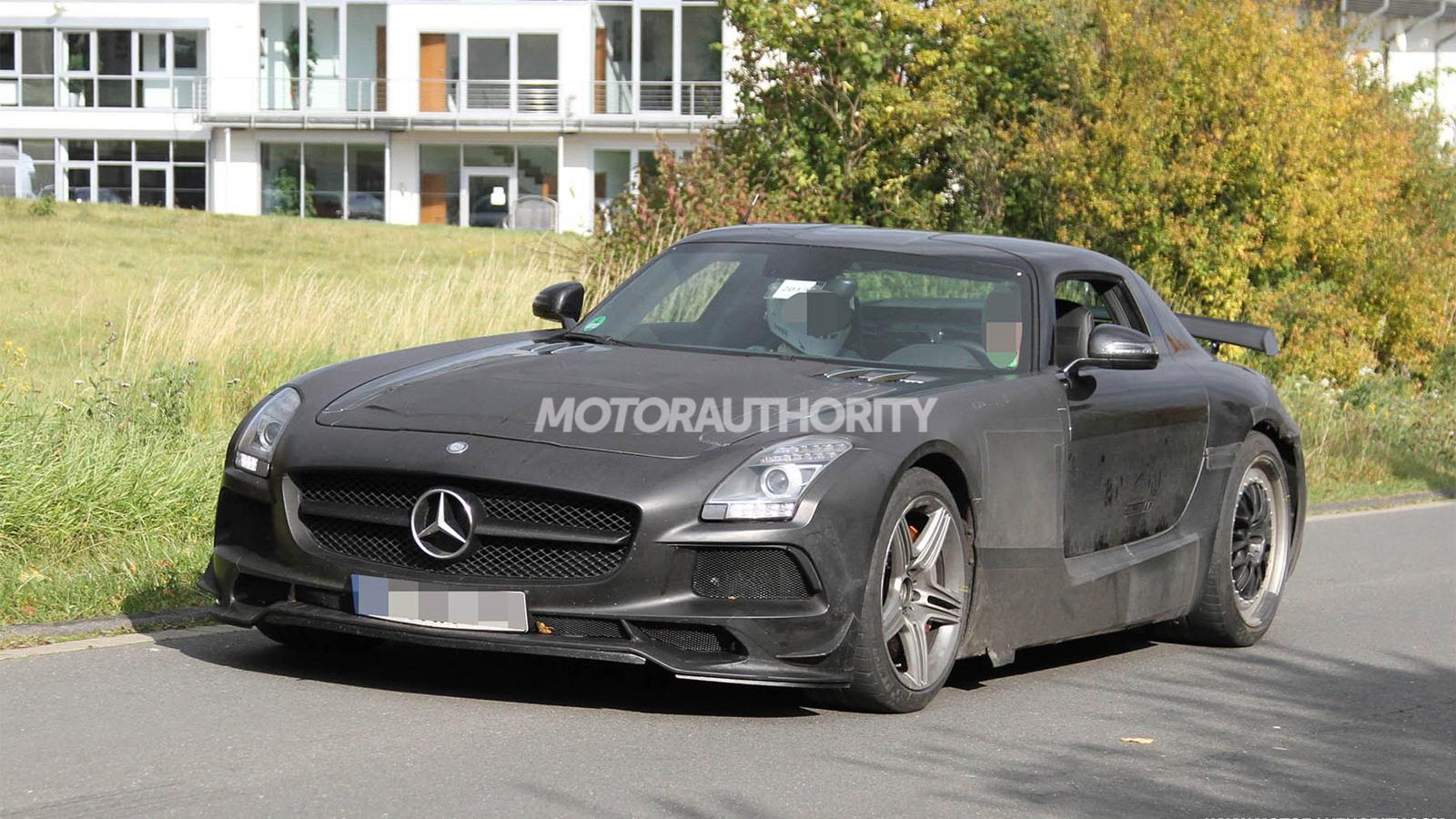 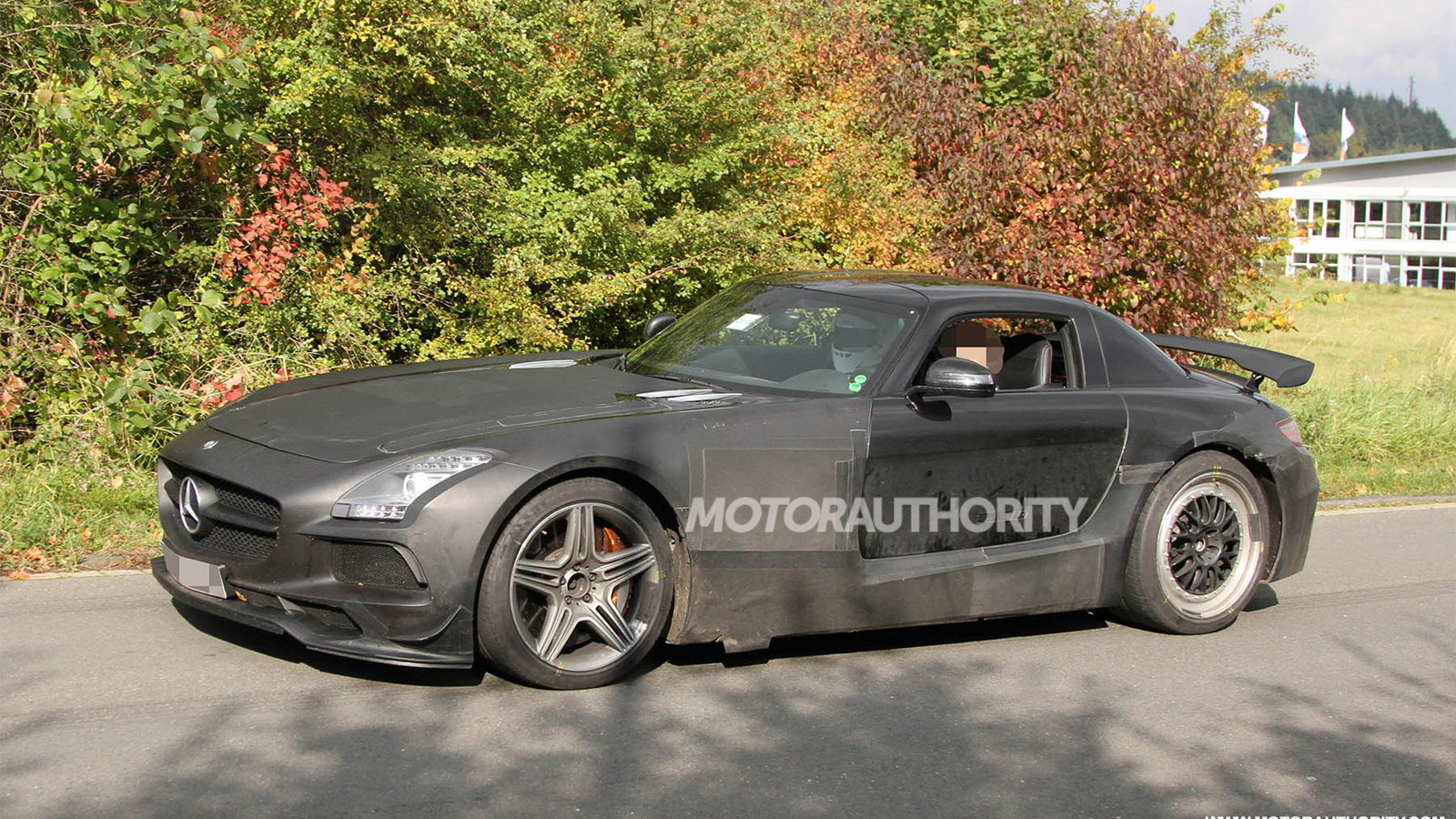 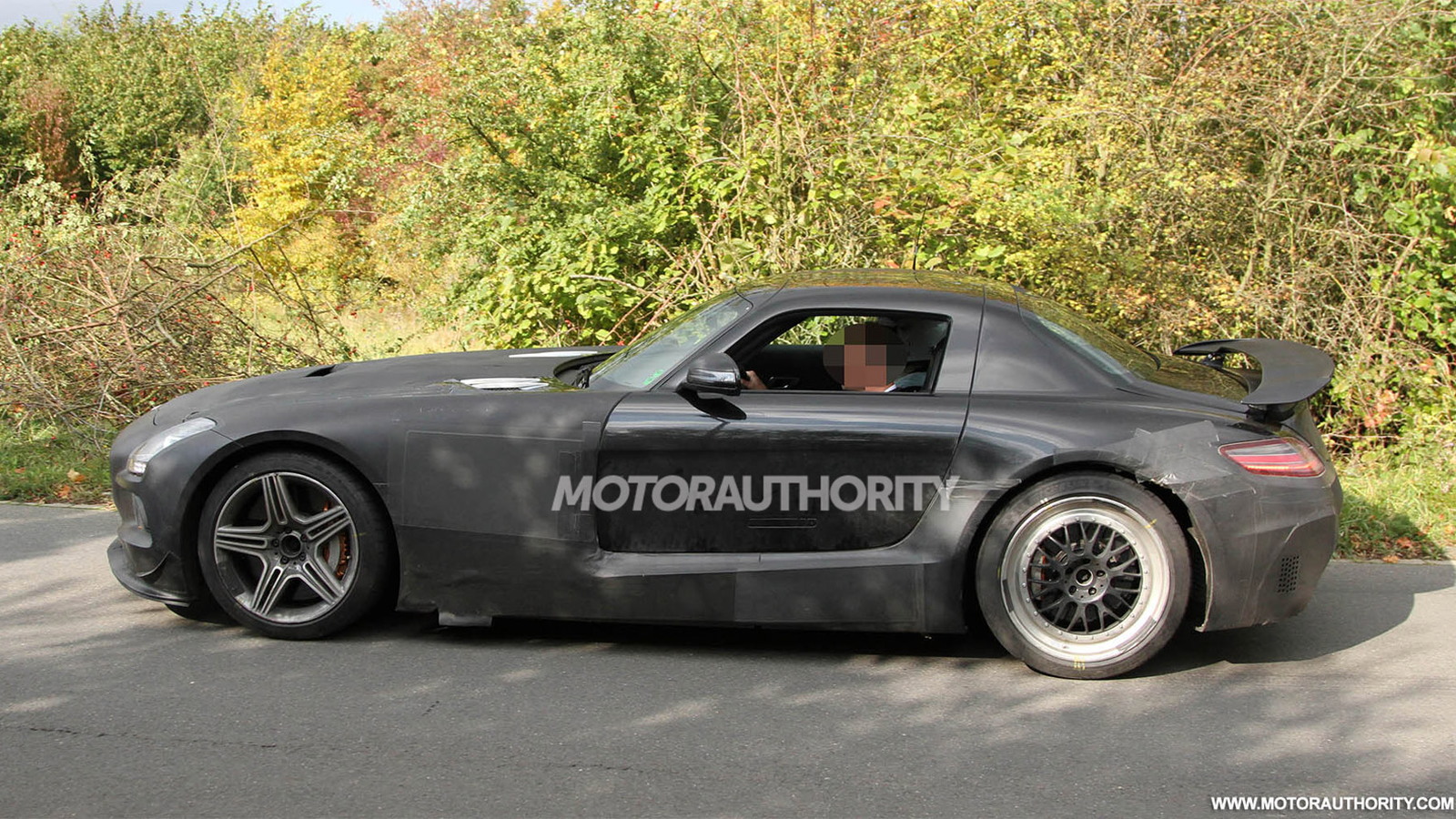 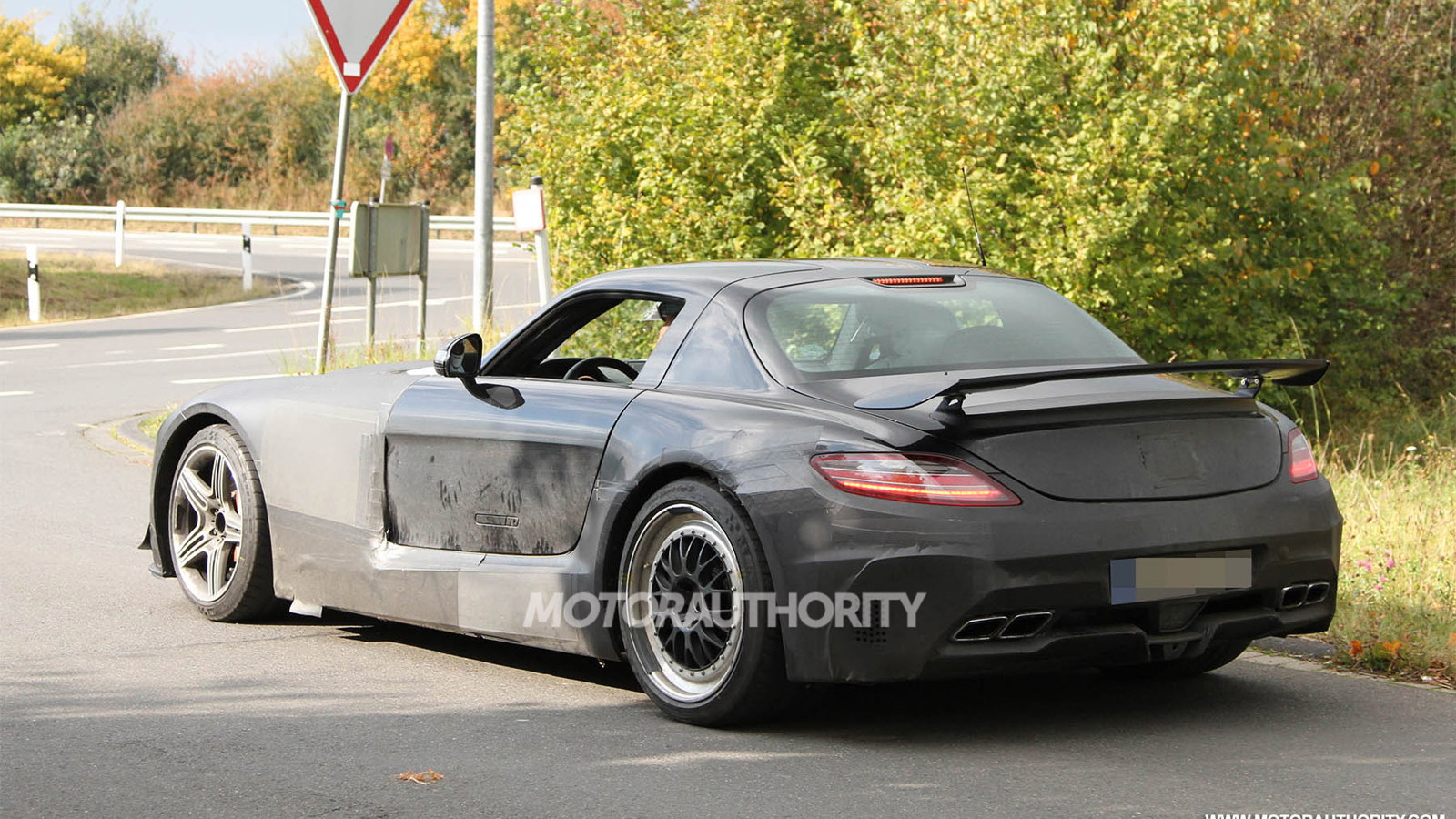 31
photos
UPDATE: The 2014 Mercedes-Benz SLS AMG Black Series has been revealed. Click here for all the details.

Since 2009 we've been chasing talk of a Black Series version of the Mercedes-Benz SLS AMG, and in 2010 our own Marty Padgett confirmed with Tobias Moers, AMG's head of vehicle development, that the SLS AMG Black Series is a "must do" car for the brand.

Since then we’ve seen a handful of prototypes testing all over Europe, from the icy Arctic Circle to the scorching mountains of Southern Spain. The latest shots show a prototype conducting some high-speed testing on the Nürburgring, and this one’s wearing the least camouflage we’ve seen yet.

Diverging from the previous images, which showed a normal-width SLS AMG with flared fenders, the newest images show a wider full-body treatment, with the fenders still wide, but matched by wider lower body work, to create a flush look.

For AMG's engineers, turning up the wick on the SLS AMG to Black Series levels won't be easy; it's already a 563-horsepower supercar (a 583-horsepower rating in GT trim) with more performance than any average human can access. The Black Series will be, quite simply, mental.

To get more out of the SLS, it's likely AMG will start with lightening the car through extensive use of carbon fiber, including body panels and interior elements. More power is also likely, perhaps as much as 650 horsepower, though how Mercedes will get it is not yet clear. Tuning the current 6.2-liter V-8 up is one possibility, as is dropping in a hot version of the new 5.5-liter twin-turbo V-8. We think the former is the more probable path, perhaps as a final send-off for the mighty powerplant.

A sharper suspension setup, larger wheels and tires, and possibly more driver-controllable elements of the car's setup are also among the potential upgrades.

As for the body, the spy photos reveal a wider front and rear track thanks to flared fenders, a very aggressive front bumper, more pronounced side skirts, and a sleek and somewhat tame rear end, though the addition of mesh vents and the wider body make sure it won't be mistaken for a regular SLS AMG. 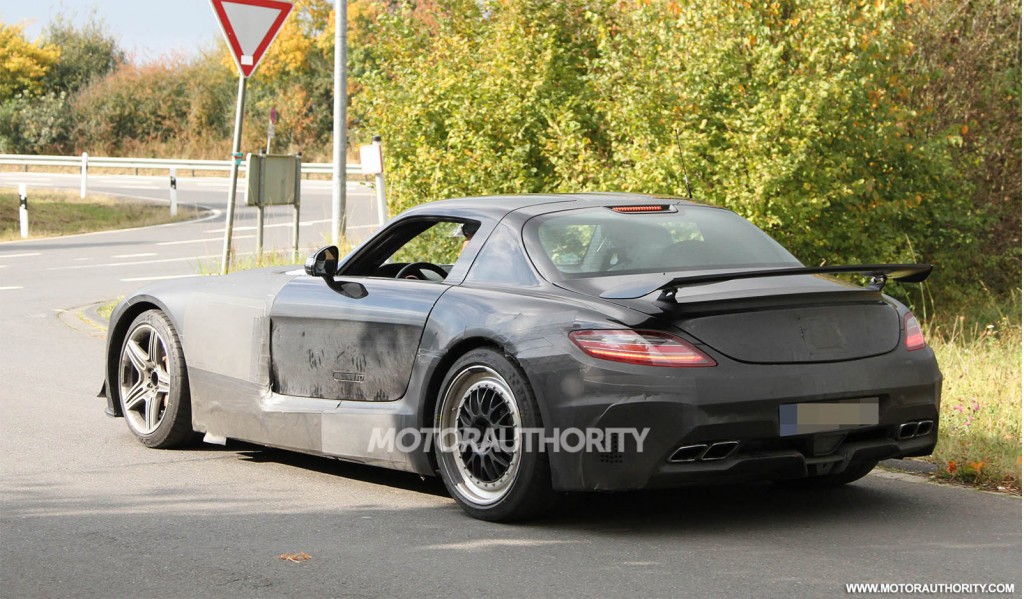 We don't know yet exactly when the SLS AMG Black Series will enter production, but we will likely have to wait until sometime in 2013 for the official unveiling, which means the car is likely to arrive in showrooms as a 2014 model.

While you wait for its arrival, be sure to check out our previous spy video of the car.

Note, this isn’t the only SLS AMG variant being introduced next year. At the 2012 Paris Auto Show, Mercedes-Benz together with AMG took the covers off the SLS AMG Electric Drive, which outputs a staggering 740 horsepower and 737 pound-feet of torque from its four electric motors.