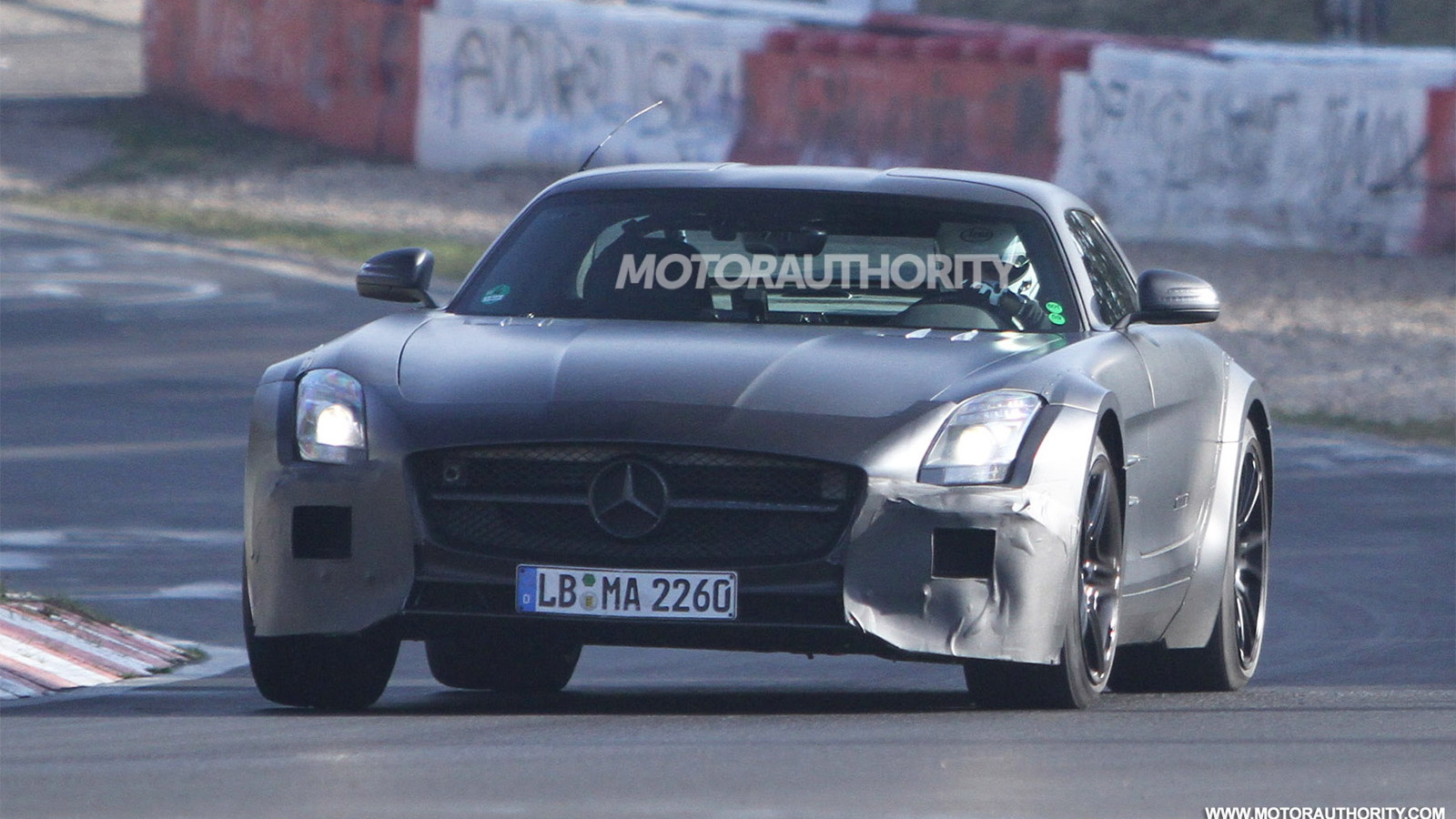 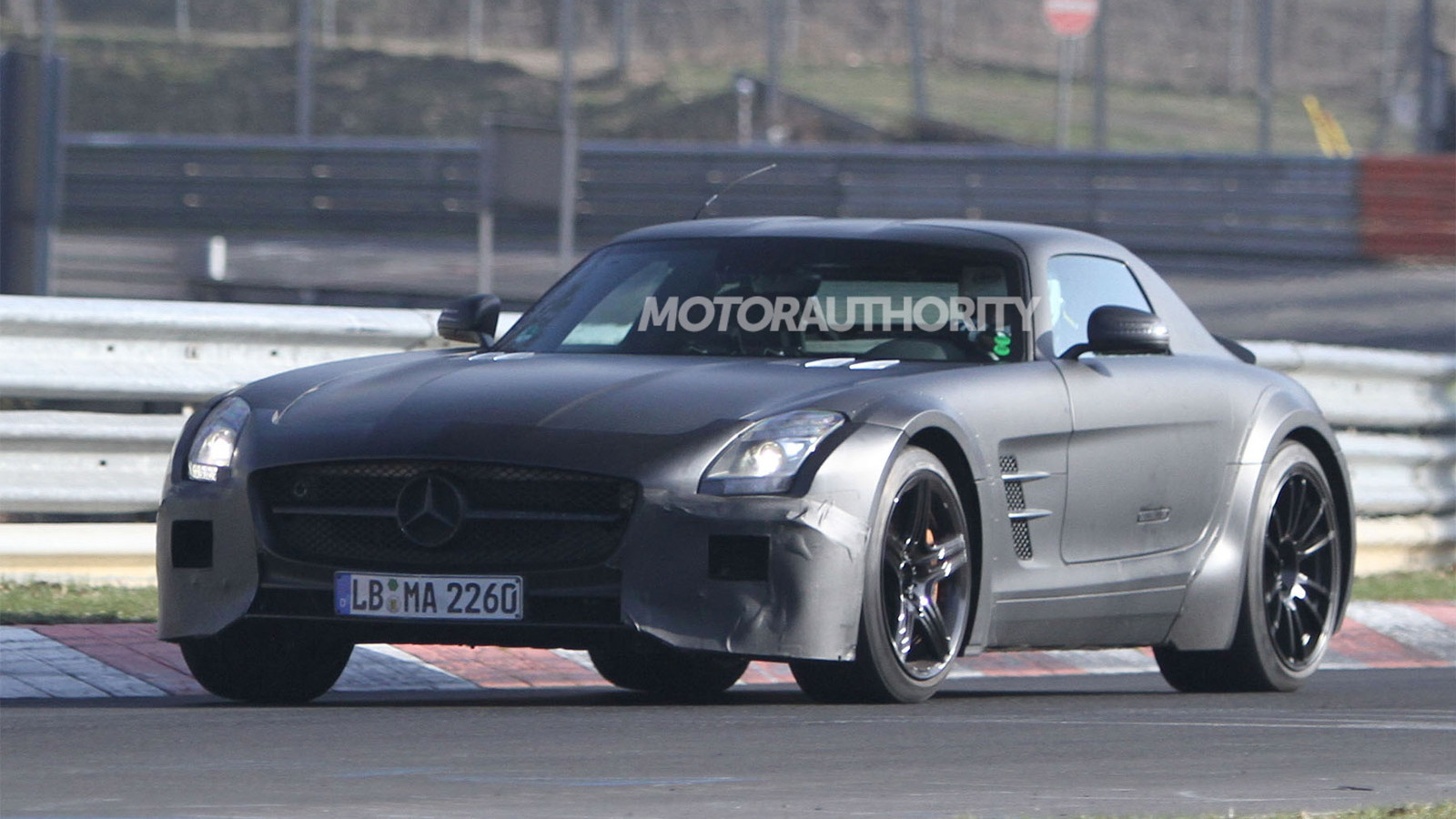 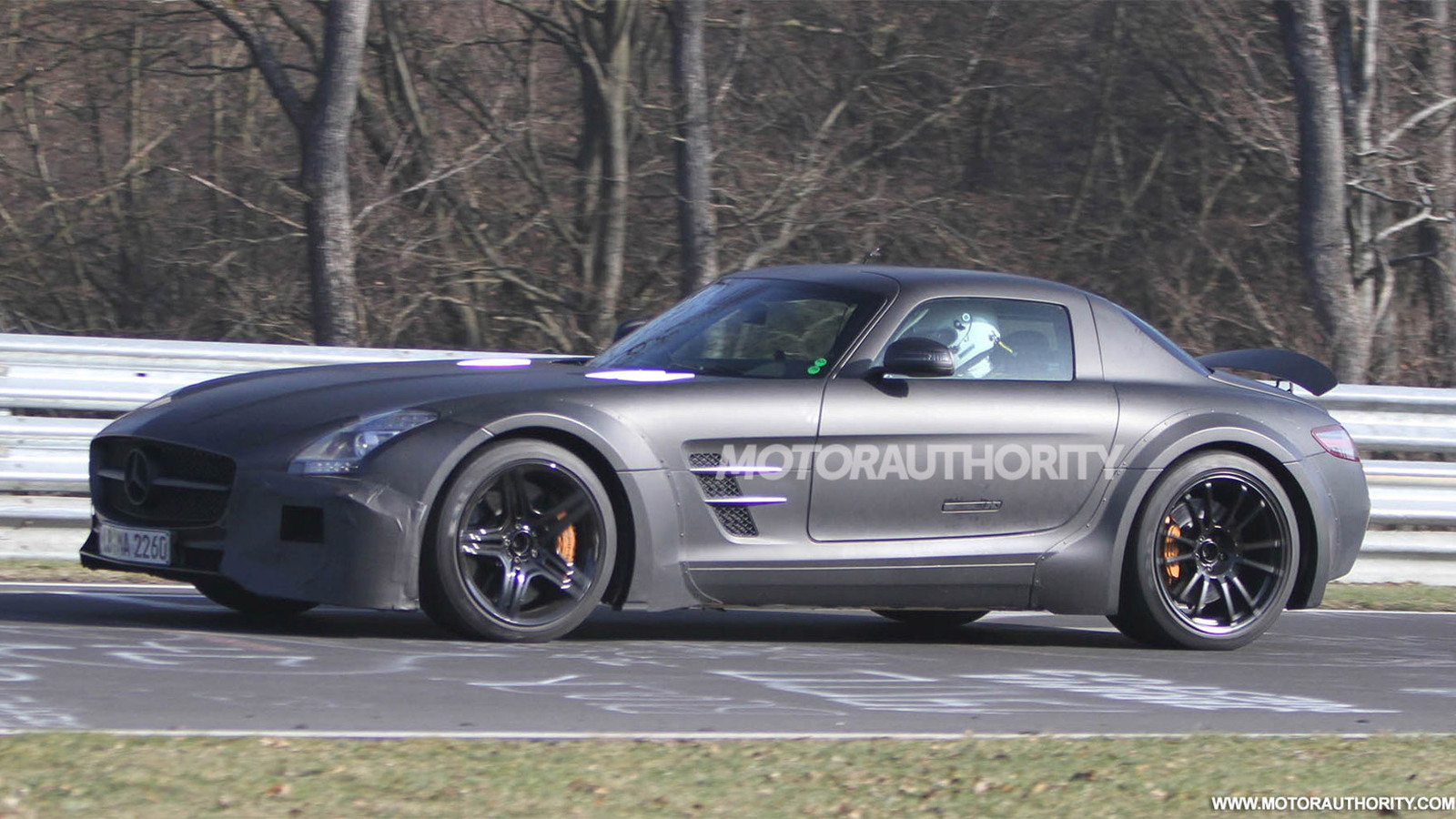 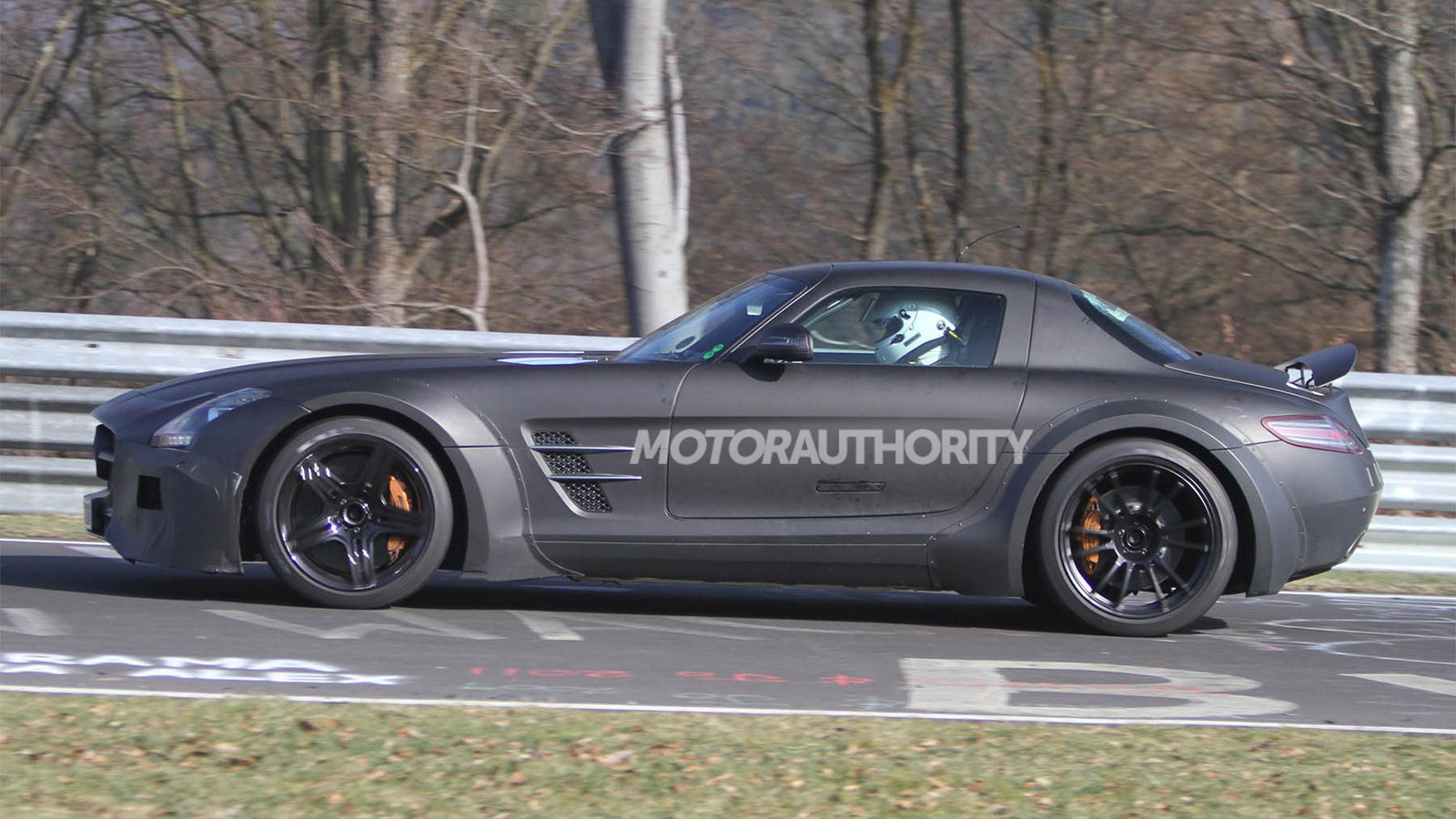 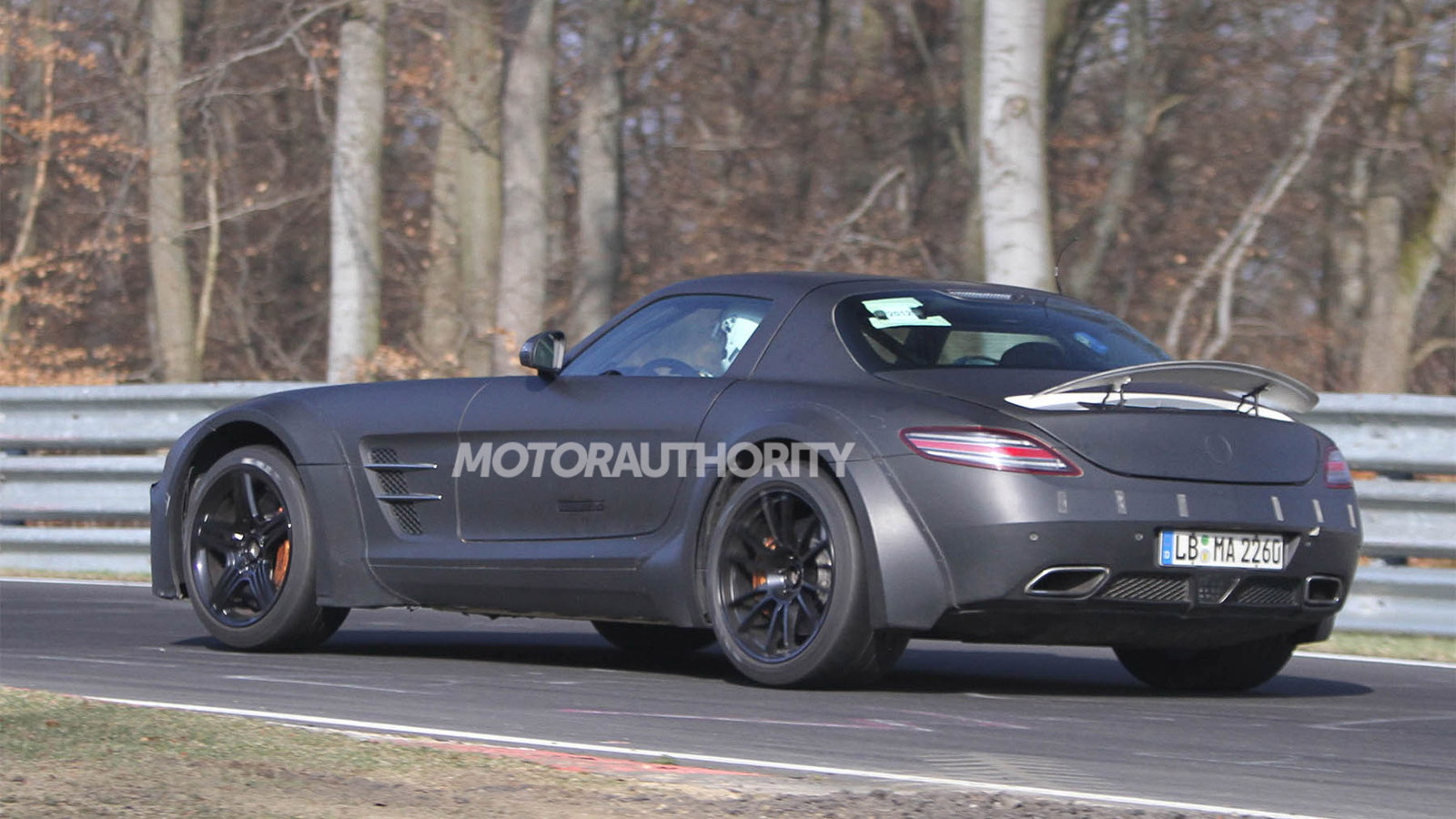 11
photos
UPDATE: The 2014 Mercedes-Benz SLS AMG Black Series has been revealed. Click here for all the details.

An AMG Black Series version of the Mercedes-Benz SLS AMG gullwing supercar is coming and we’ve got an exclusive spy video of a prototype testing at the Nurburgring race track in Germany and on some of its surrounding roads.

The car is the successor to the all-out-insane SL65 AMG Black Series from 2008, and we suspect it will be just as loony.

It will most likely be called the Mercedes-Benz SLS AMG Black Series and should deliver as much as 650 horsepower, though how AMG’s engineers will get it isn't yet clear.

Tuning the current 6.2-liter V-8 up is one possibility, as is dropping in a hot version of the new 5.5-liter twin-turbo V-8. We think the former is the more probable path, perhaps as a finally hurrah for the sledgehammer V-8.

From the spy video, it’s clear the car will adopt typical Black Series aero and chassis upgrades including a wider body and track, stiffened suspension and uprated brakes.

One of the key features will be an enhanced version of AMG’s three-mode Adaptive Suspension, aimed at helping to get most of the SLS AMG Black Series’ ample power to the ground. The SLS AMG's current setup isn’t exactly soft, but there’s certainly room for improvement in the suspension department when compared to other exotics.

Another important area is weight reduction. Though we’re unlikely to see another 500-pound reduction like we did with the SL65 AMG Black Series, AMG’s engineers should be able to reduce the curb weight of the SLS AMG by at least 100 pounds through the use of more exotic materials and less luxury in the cabin. That means we could be looking at a final figure of less than 3,500 pounds.

All of these factors will simply add up to mind-boggling performance. Expect 0-60 times near the 3.0-second mark and a top speed well over 200 mph.

The final release date is still a mystery, though it’s unlikely to be for some time as engineers have only recently started public road trials. The most likely scenario will see the SLS AMG Black Series launched in 2013 as a 2014 model.