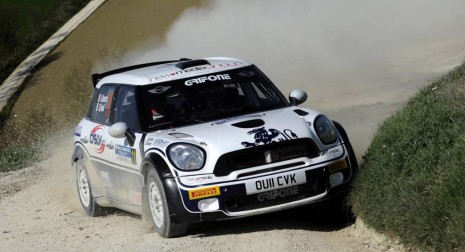 You already know MINI will be back in WRC this year, testing at a limited number of events ahead of a full push for the 2012 season. One of these events was this past weekend’s Rally dell’Adriatico in Italy where the John Cooper Works backed MINI S2000 rally car stormed to victory at the hands of Andrea Navarra and co-driver Simona Fedeli.

The two were piloting the Regional Rally Car version of the MINI run by the well-known Grifone team. Navarra led from the start to the finish of the rally, which kicks off the Italian Gravel Championship, based on Italy’s Adriatic coast.

Note that this was just MINI’s third competitive outing. In second place, a total of 12 seconds behind, was Norway’s Andreas Mikkelsen in a Skoda Fabia S2000.

As for the official MINI WRC Team, it will present the final iteration of its new John Cooper Works rally car at a special event in Oxford, UK on April 11 before debuting it at Rally Italy this May.

There are also rumors a production version of the MINI rally car could be launched, inspired in part by homologation requirements of the FIA. Whether that pans out or not, the MINI rally car based on the Countryman is an impressive vehicle in its own right.