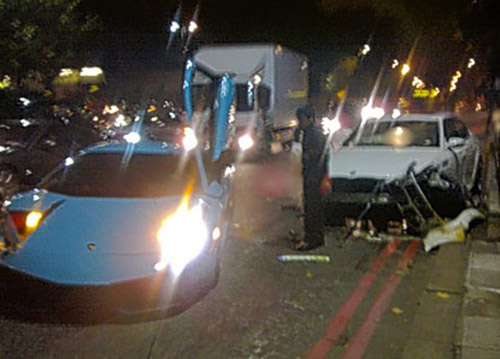 A baby blue Lamborghini Murcielago LP670-4 Superveloce has crashed in the pricey London suburb of Knightsbridge, provoking residents who claim the area has become a playground for wealthy supercar owners who like to drive their cars and rev their engines late into the night. The driver of the Lambo wasn’t necessarily the one who was at fault here as witnesses claim it was struck by a white BMW M5 that lost control. Both cars, however, were said to be going quite fast.

The baby blue paint scheme of the LP670-4 Superveloce suggests that the car belongs to Ana Al-Thani, a wealthy Middle-Eastern man who owns a small fleet of supercars all finished the same distinctive color. The same car also made headlines earlier this year when it was parked illegally--and subsequently had a tire clamped--outside the prestigious Harrods department store, near where the crash took place.

Fortunately, no one was injured in this latest incident.

Knightsbridge residents claim supercars from brands like Bugatti, Ferrari and Lamborghini regularly tear up the neighbourhood until the early hours, especially after the Qatari royal family bought the Harrods store in April of this year. There have been a number of high profile accidents in the area including one where a supercar spun out of control and hit four parked cars, and the driver subsequently arrested.