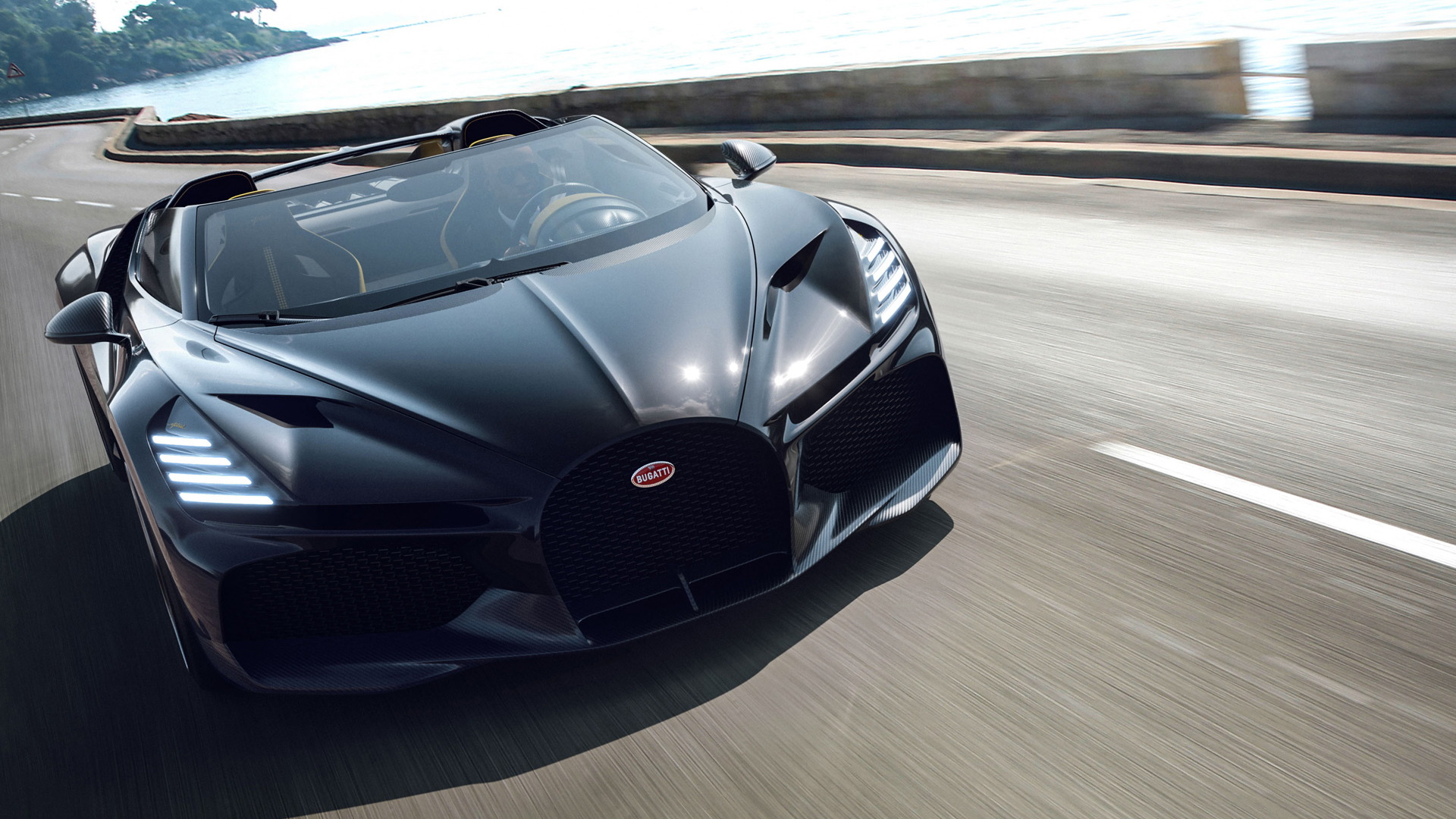 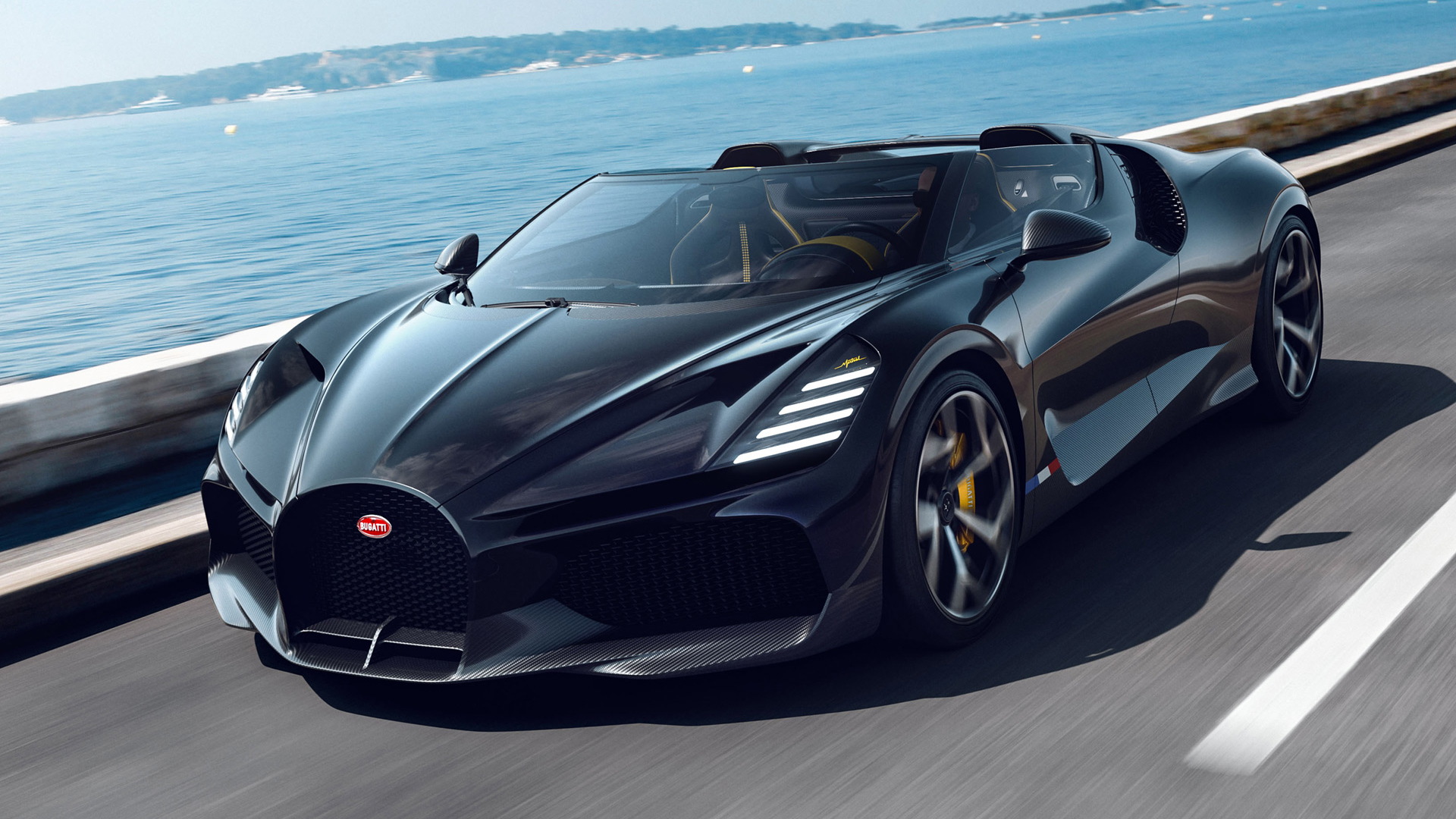 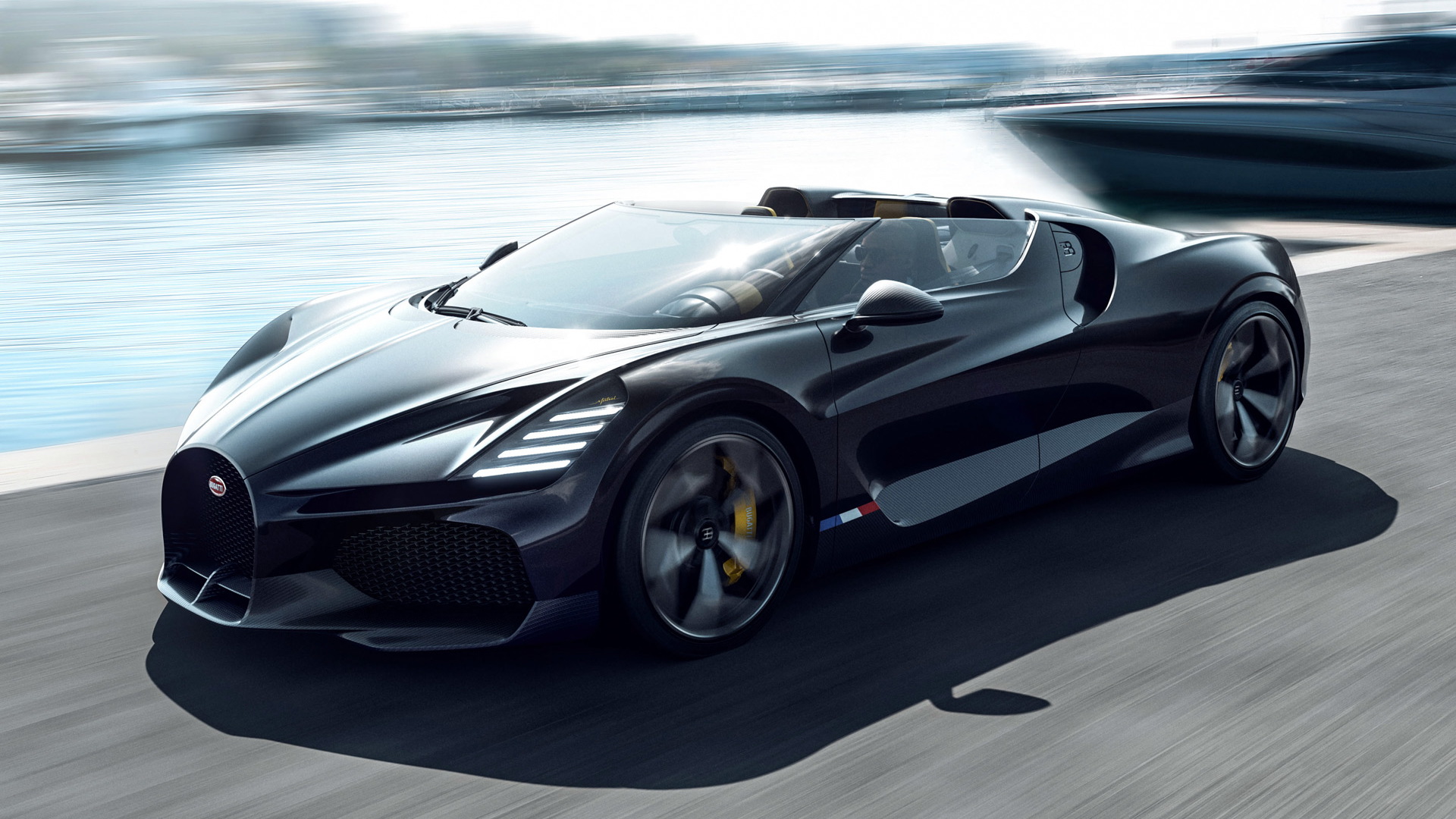 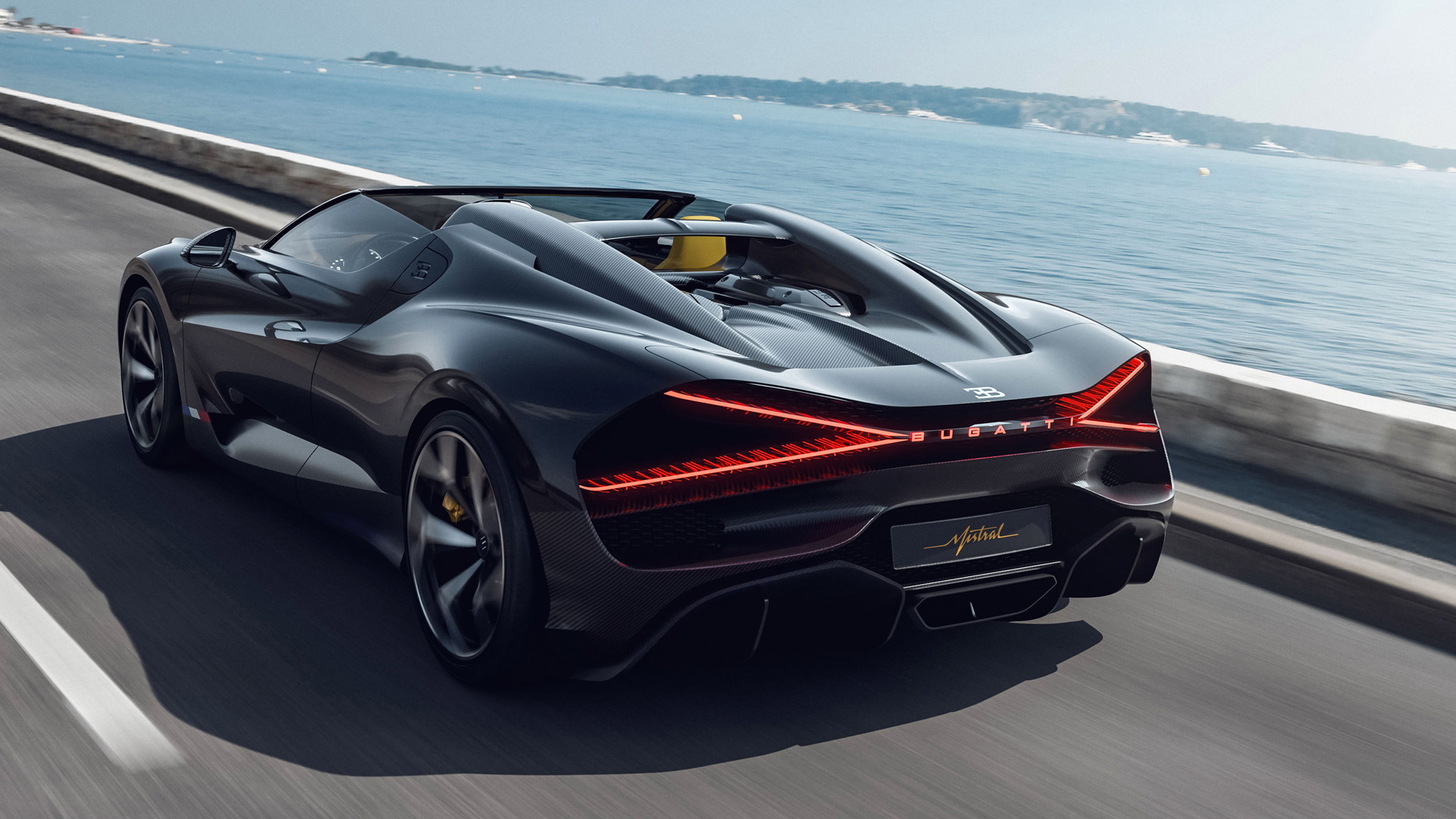 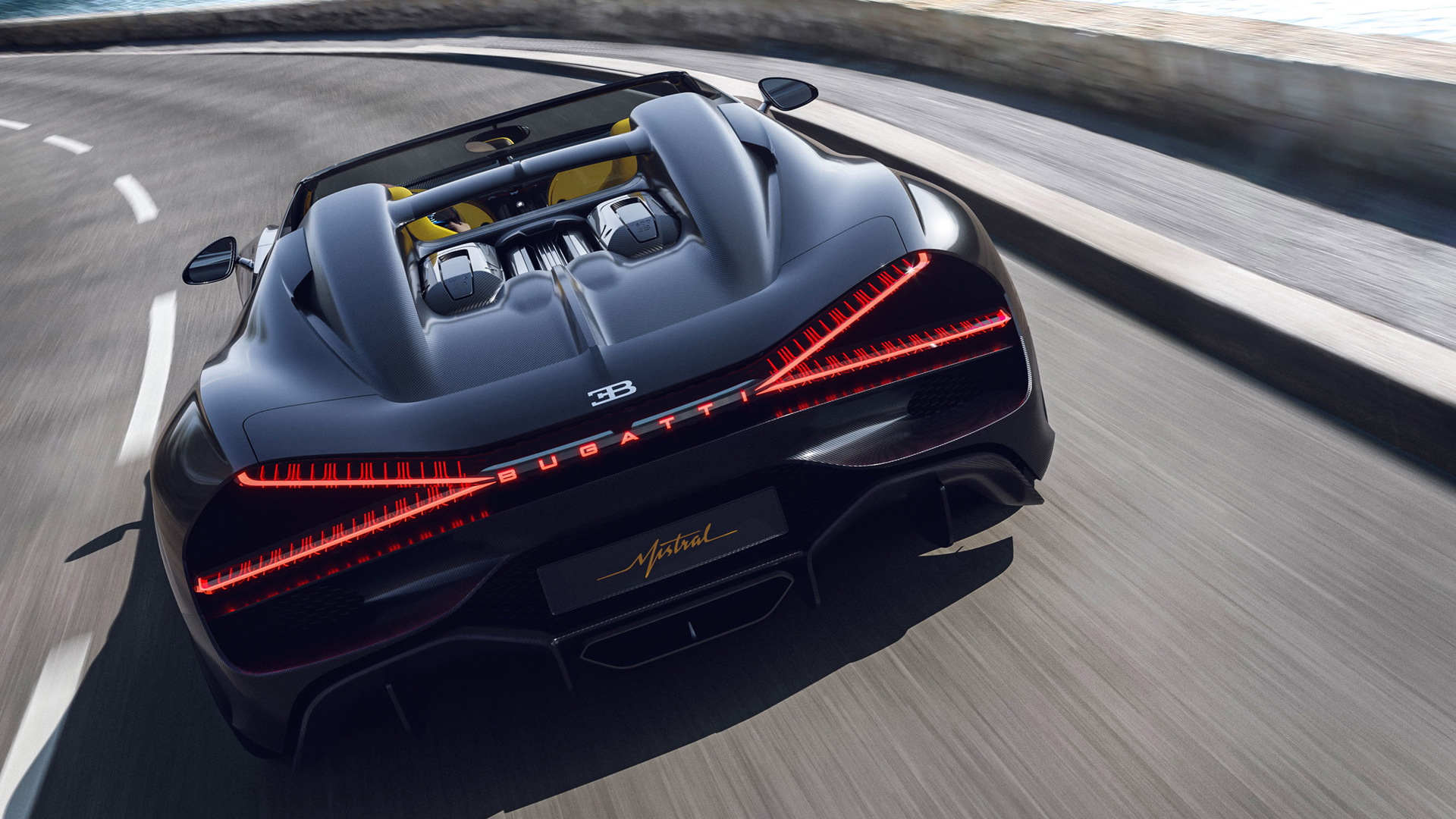 Bugatti wasn't kidding when it said the car it planned for 2022 Monterey Car Week would be the “last of its kind.”

It turns out that was a reference to the new Bugatti Mistral roadster unveiled Friday being the French marque's last car powered by the quad-turbo 8.0-liter W-16 engine. That mighty engine debuted in 2005 in the original Veyron and has powered every Bugatti since.

However, while Bugatti plans electric vehicles in the future, it isn't abandoning the internal-combustion engine just yet. A successor to the Chiron is planned for later this decade and will be a hybrid, though with an expected smaller engine than the W-16 and greater emphasis on electric power than traditional hybrids.

For now, though, Bugatti's focus is on the Mistral, a name borrowed from a wind of the French Riviera, as well as a Maserati. It's a roadster whose design and ethos were inspired by the 1934 Bugatti Type 57 Roadster Grand Raid, and it's the only open-top car Bugatti plans on the Chiron platform.

It's development wasn't easy. The Chiron's carbon-fiber monocoque structure wasn't intended for open-top driving, so the monocoque not only needed to be reengineered but also reshaped to enable an appealing design that wouldn't compromise on performance.

The engine is the 1,578-hp version of the W-16 reserved for special models like the Chiron Super Sport 300+, and other Chiron-based limited-volume cars. While we don't have any performance figures, Bugatti said a goal is to set a land-speed record for an open-top production vehicle.

We already know the closed-roof Chiron Super Sport 300+ with the same engine reached 304.773 mph in 2019, and for the open-top record the Mistral will only need to reach 265.6 mph, set by Hennessey's Venom GT Spyder in 2016. The only problem is Hennessey has a new 1,817-hp Venom F5 Roadster, and is keen on keeping the record for itself.

Like any Bugatti, apart from perhaps the track-only Bolide, the Mistral isn't only about performance but also about conveying a sense of elegance and comfort. The design at the front is similar to the one-off La Voiture Noire, also based on the Chiron platform, though the headlights here feature four bars as a nod to the W-16 engine's four turbochargers. The taillights are also a nod to the engine, with the four light bars stretching out from the center representative of the engine's four cylinder banks joined to a single crankshaft.

The body is a true roadster, with the windscreen kept short to help make the car as low as possible. It's so low a line can be drawn from the top of the windscreen, along the side glass, and to the top of the side intakes. These intakes are joined by two new ram induction intakes behind the headrests, which also serve as roll hoops. Made from carbon fiber, each of these intakes is strong enough to support the weight of the car in the case of a rollover. Their proximity to the headrests will also ensure an intake noise at throttle that will be unmatched by any other Bugatti with this engine.

Inside, the design and layout is similar to the Chiron's, though with a few unique touches. The list includes woven leather used on the door panels, a silhouette of the car on each side of the center console, and a wood and amber insert with Bugatti’s famous dancing elephant motif in the gear lever.

“The union of a roadster format and our W-16 powertrain is absolute perfection,” Mate Rimac, Bugatti Rimac's CEO, said in a statement. “With the roof removed, and a pair of large air intakes directly behind your head feeding around 70,000 liters of air through the engine every minute at full bore, driving the W-16 Mistral connects you to the intricate workings of this revolutionary powertrain like no other Bugatti to date.”

Limited to 99 units and priced at 5 million euros (approximately $5 million), deliveries of the Mistral are scheduled to start in 2024. In case you're wondering, the entire production run is already sold out.