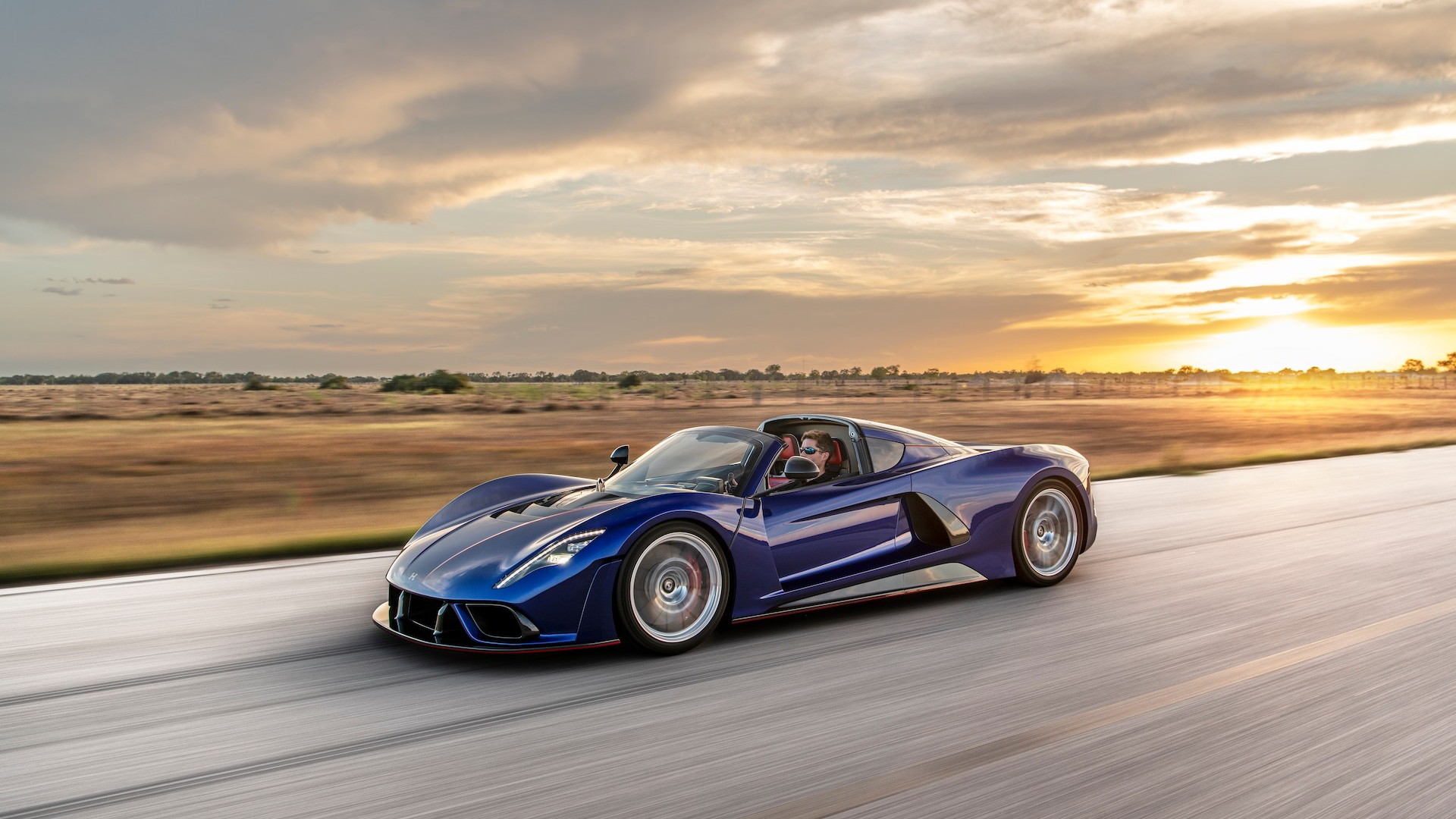 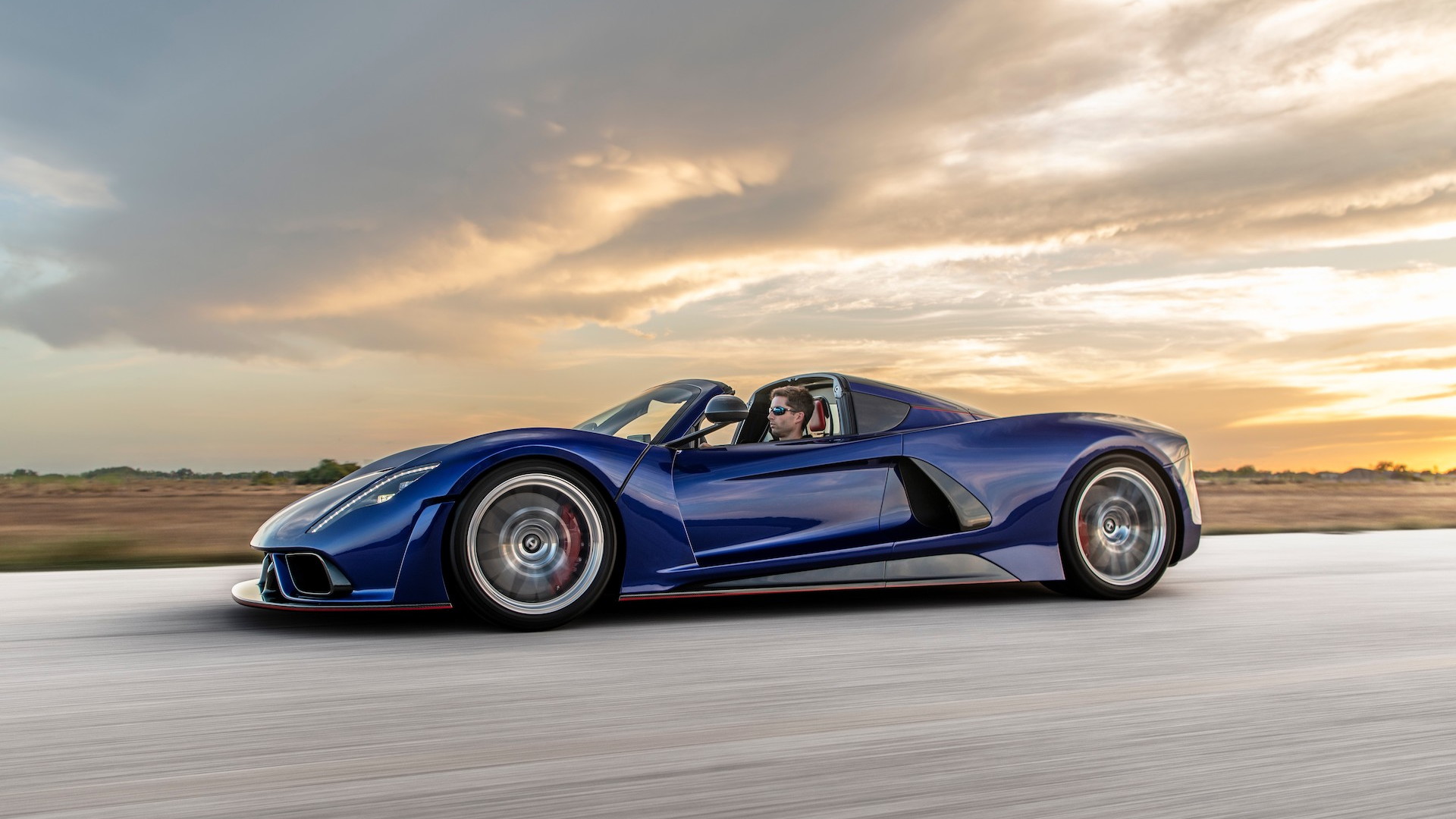 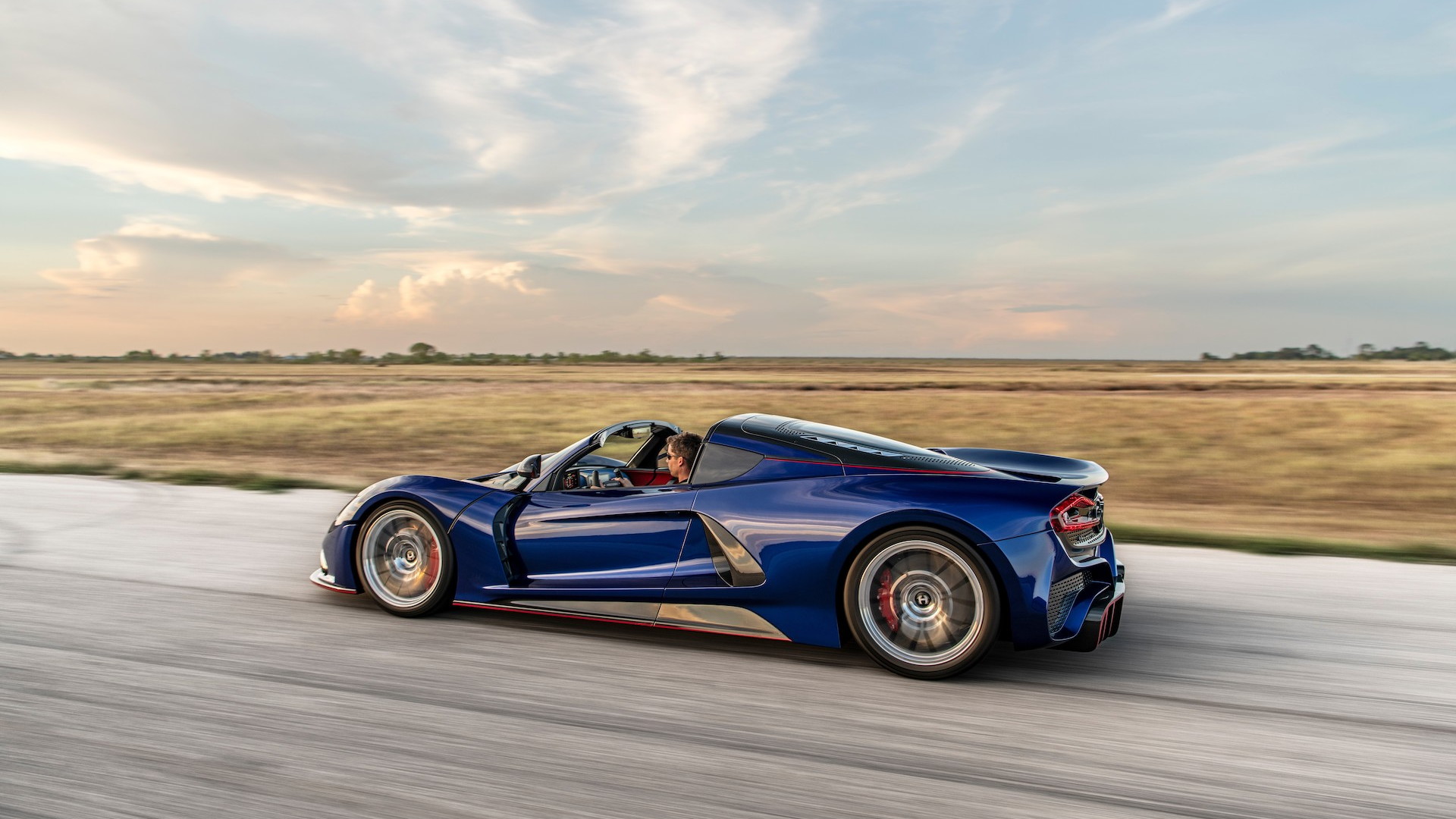 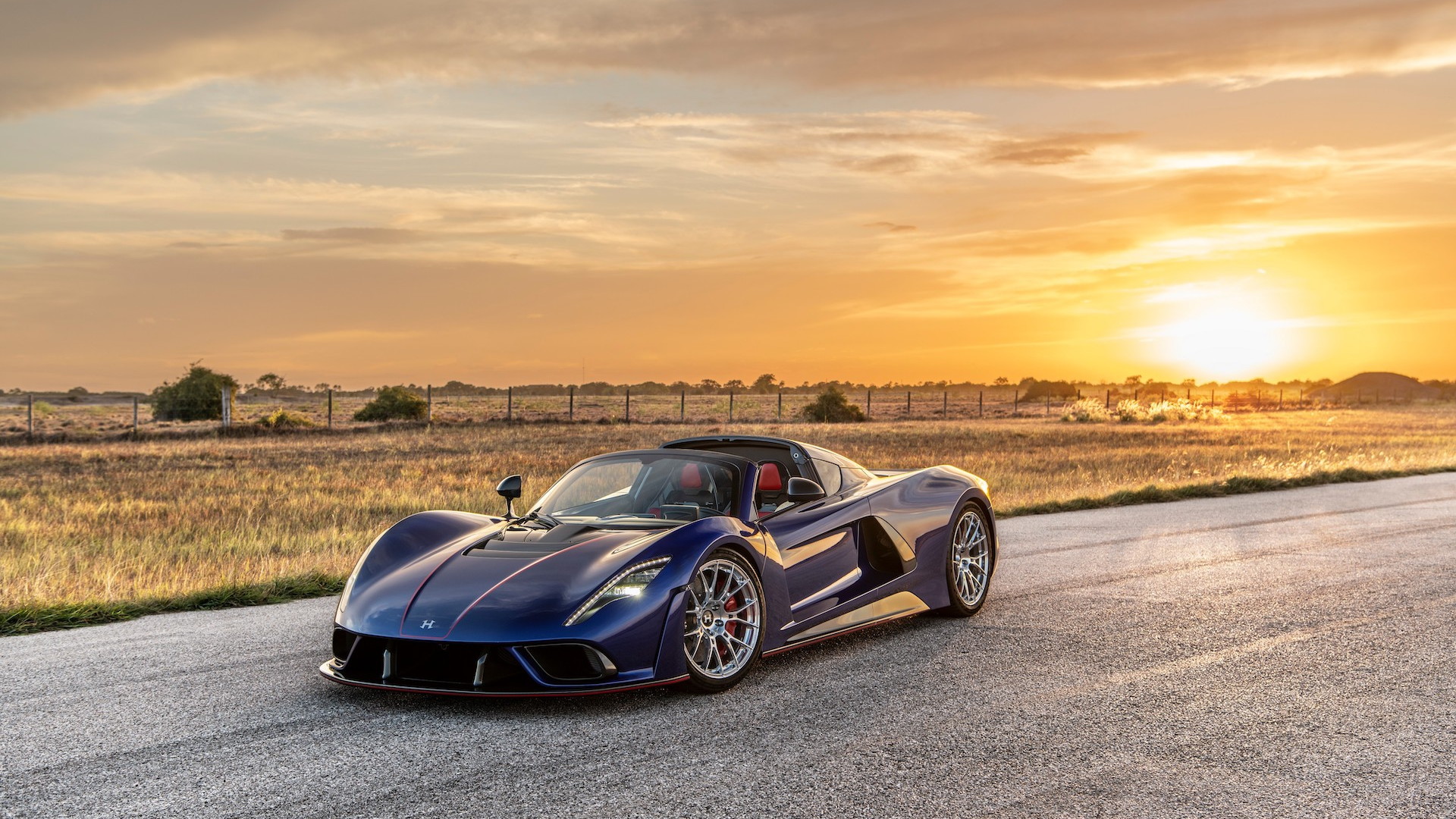 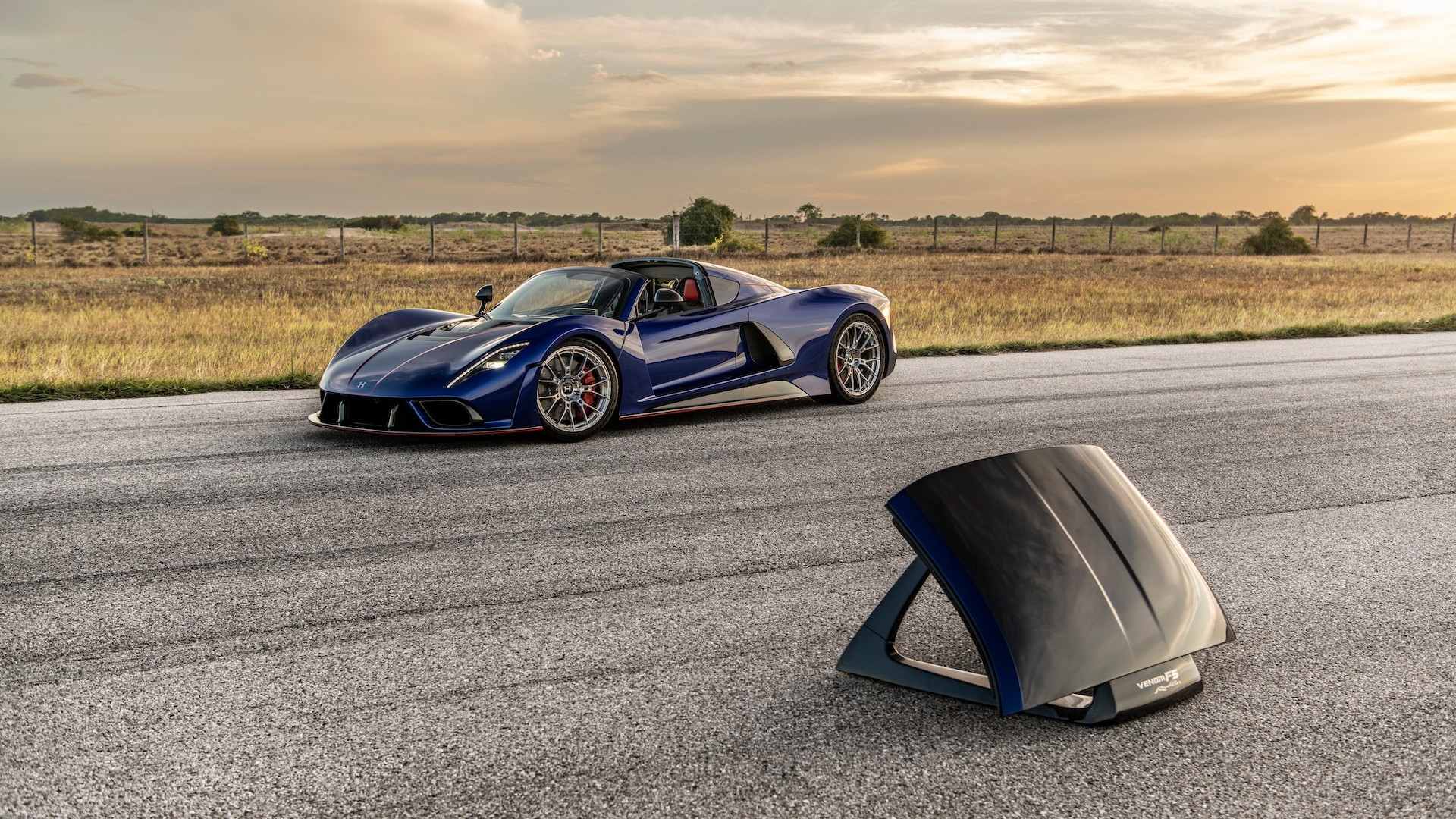 Hennessey on Thursday revealed the Venom F5 Roadster, a car that just might be the fastest convertible ever to enter production.

Set to make its formal debut on Aug. 19 at The Quail, A Motorsports Gathering, one of the premier events of 2022 Monterey Car Week, the new Venom F5 Roadster is the open-top version of Hennessey's Venom F5 hypercar unveiled two years ago, and there's been no loss in performance with the removal of the roof, we're told.

The Venom F5 Roadster runs the same twin-turbo 6.6-liter V-8 as its coupe sibling, meaning a peak output of 1,542 hp on pump gas and 1,817 hp on E85. Peak torque is rated at 1,193 lb-ft. The mighty engine, nicknamed Fury, is mated to a 7-speed automated manual transmission and spins the rear wheels only.

Also shared with the coupe is the carbon-fiber central monocoque structure, though the roadster features a removable roof panel that needs to be stored at home. The Venom F5 was designed from the outset with an open-top version in mind, so only minor tweaks were required to the monocoque to accommodate the missing roof, meaning no major weight gain. Hennessey quotes a dry weight of 3,098 lb for the Venom F5 Roadster, versus 2,998 lb for the coupe.

The removable roof panel is made from carbon fiber and sports an Alcantara headliner. It connects to the car via a pair of high-strength latches. Buyers will receive a separate stand to accommodate the roof panel when it's not in use. Carbon fiber is also used for the other body panels, as well as in the cabin, to help further save weight.

Hennessey still needs to conduct some final tests to validate the car's performance, but the company states the Venom F5 Roadster is engineered to eclipse 300 mph, just like the coupe. Mind you, the highest speed Hennessey has taken the coupe is 271.6 mph, though higher speed runs are planned.

Should the roadster match the coupe in performance, it will be the fastest open-top car of any kind in production. The speed to beat is 265.6 mph, set by Hennessey's own Venom GT Spyder back in 2016.

Hennessey plans to build 30 examples of the roadster, each priced at $3 million. That's more than the 24 examples of the coupe that are destined to be built. Production will be handled at Hennessey's headquarters in Sealy, Texas. The coupe is already in production and the roadster will be too starting late this year.

Hennessey has also hinted at launching a high-downforce model designed for short lap times instead of high top speeds, so we could see even more versions of the Venom F5 at some point.