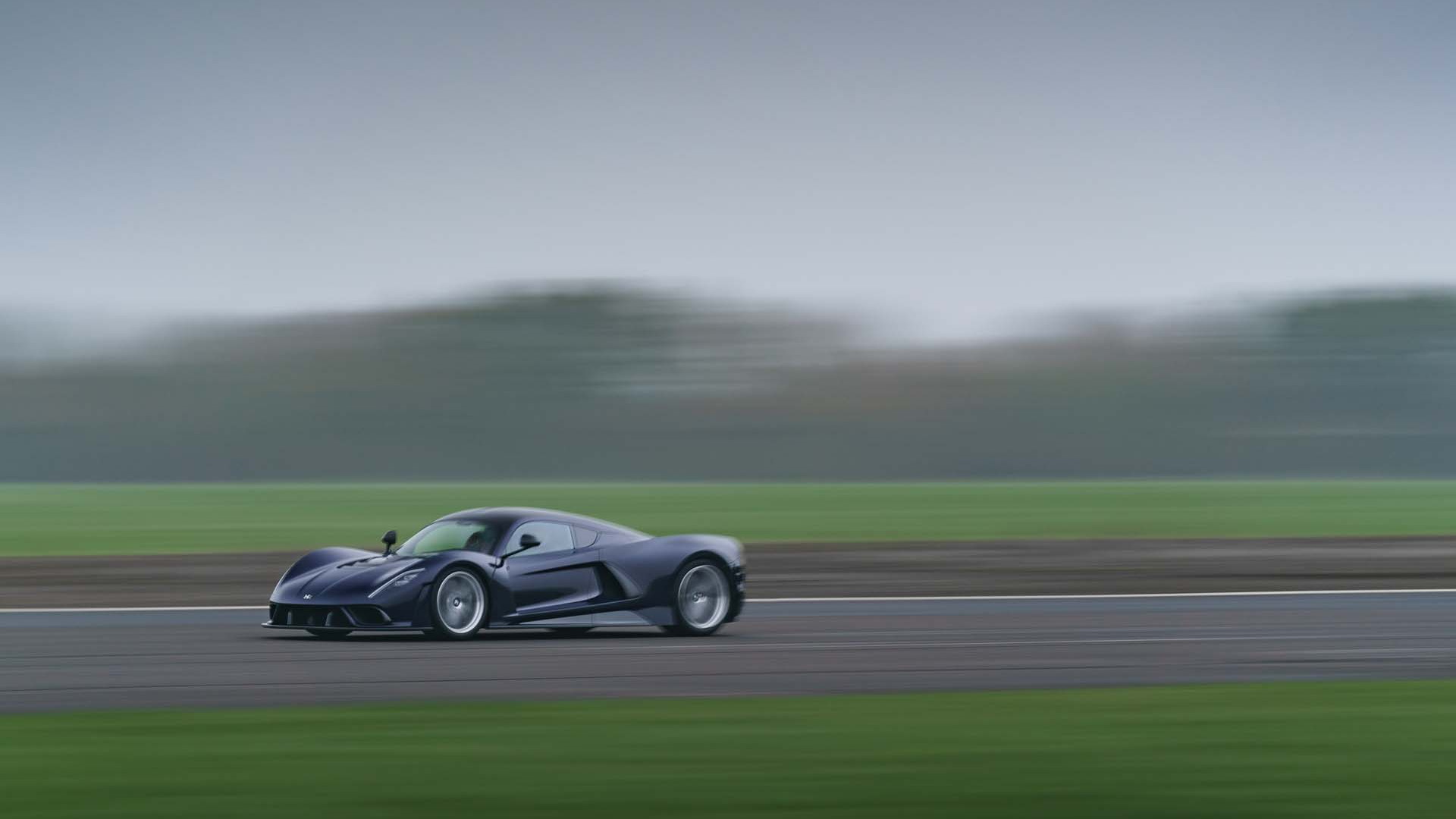 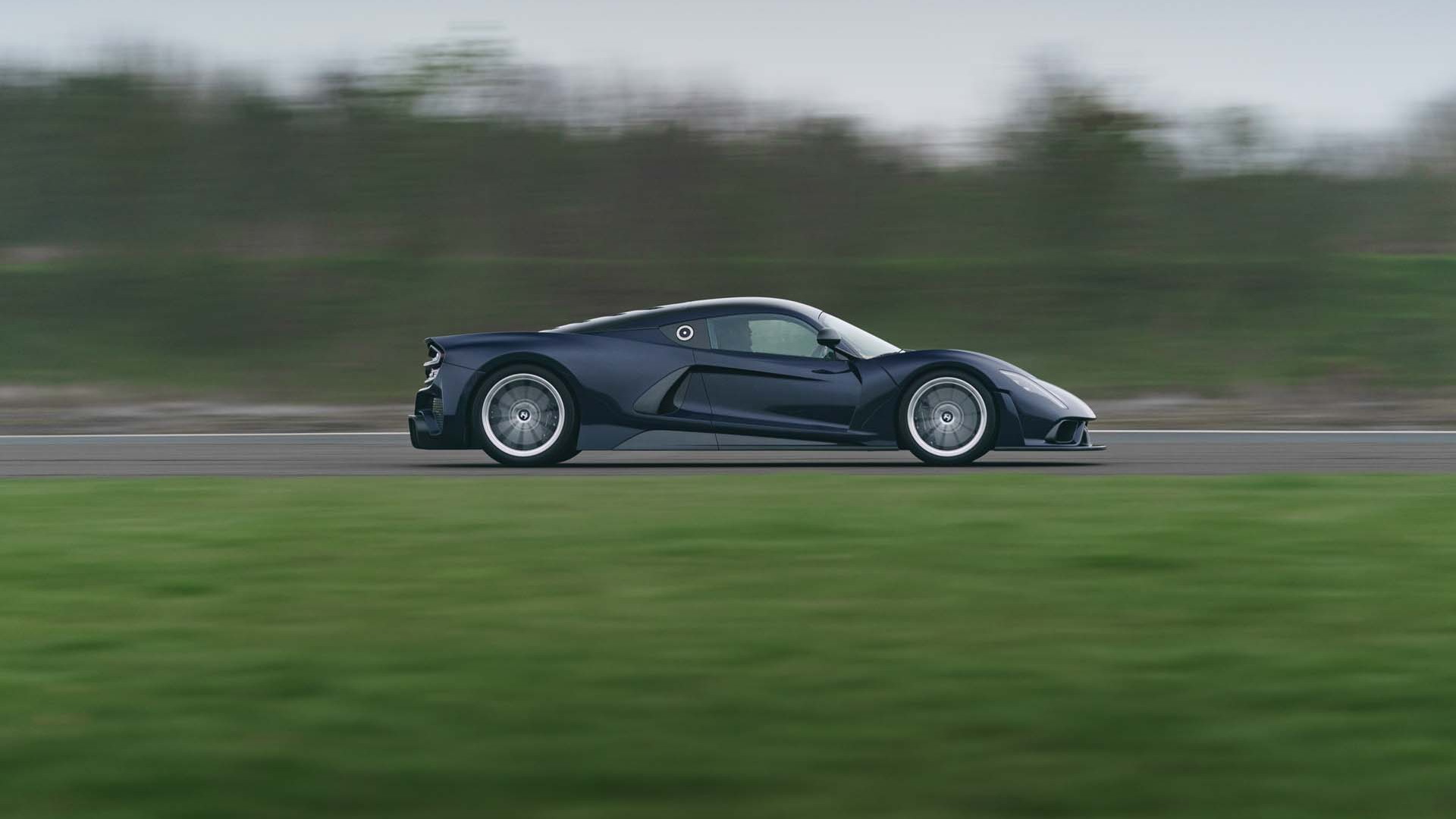 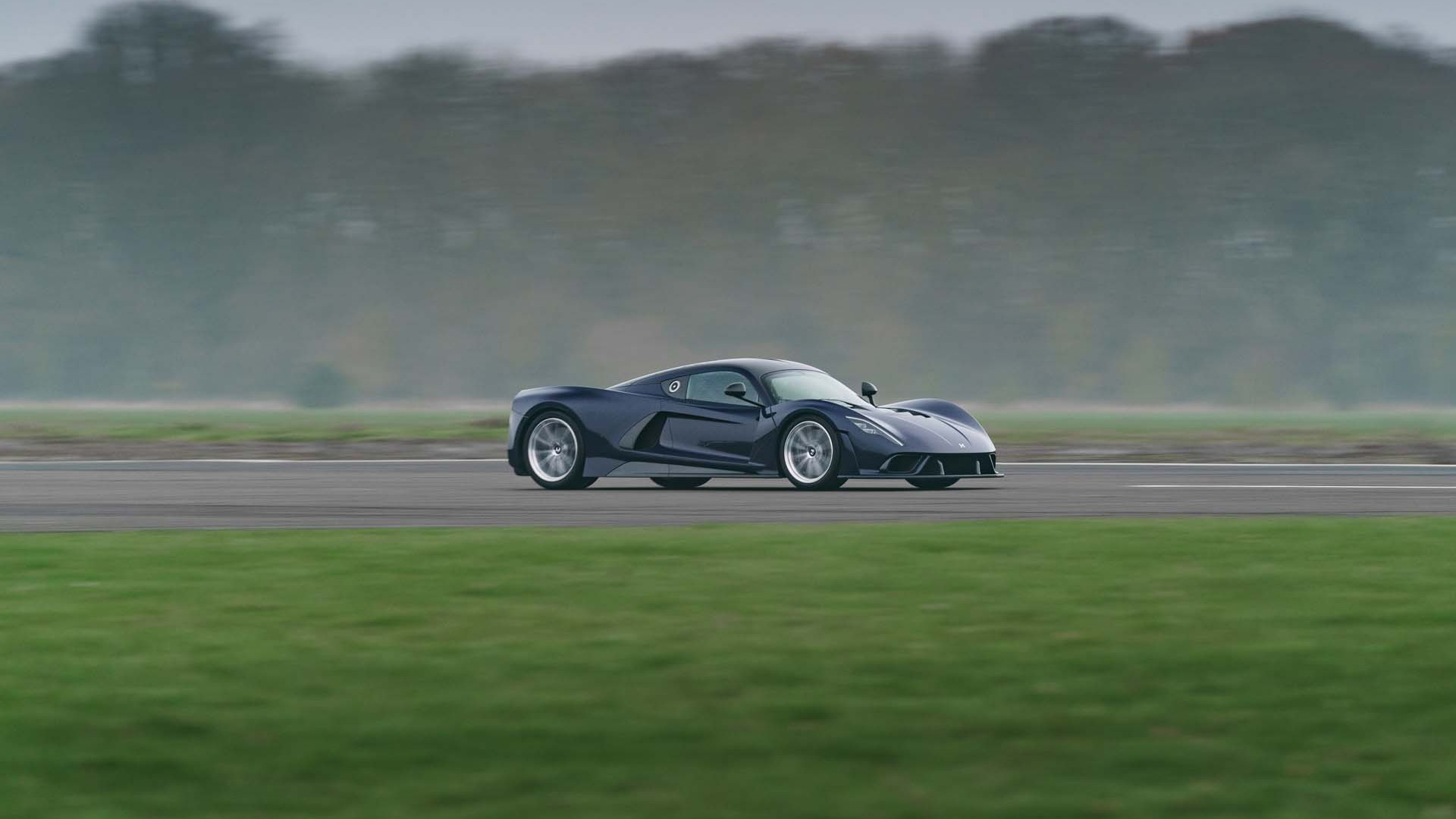 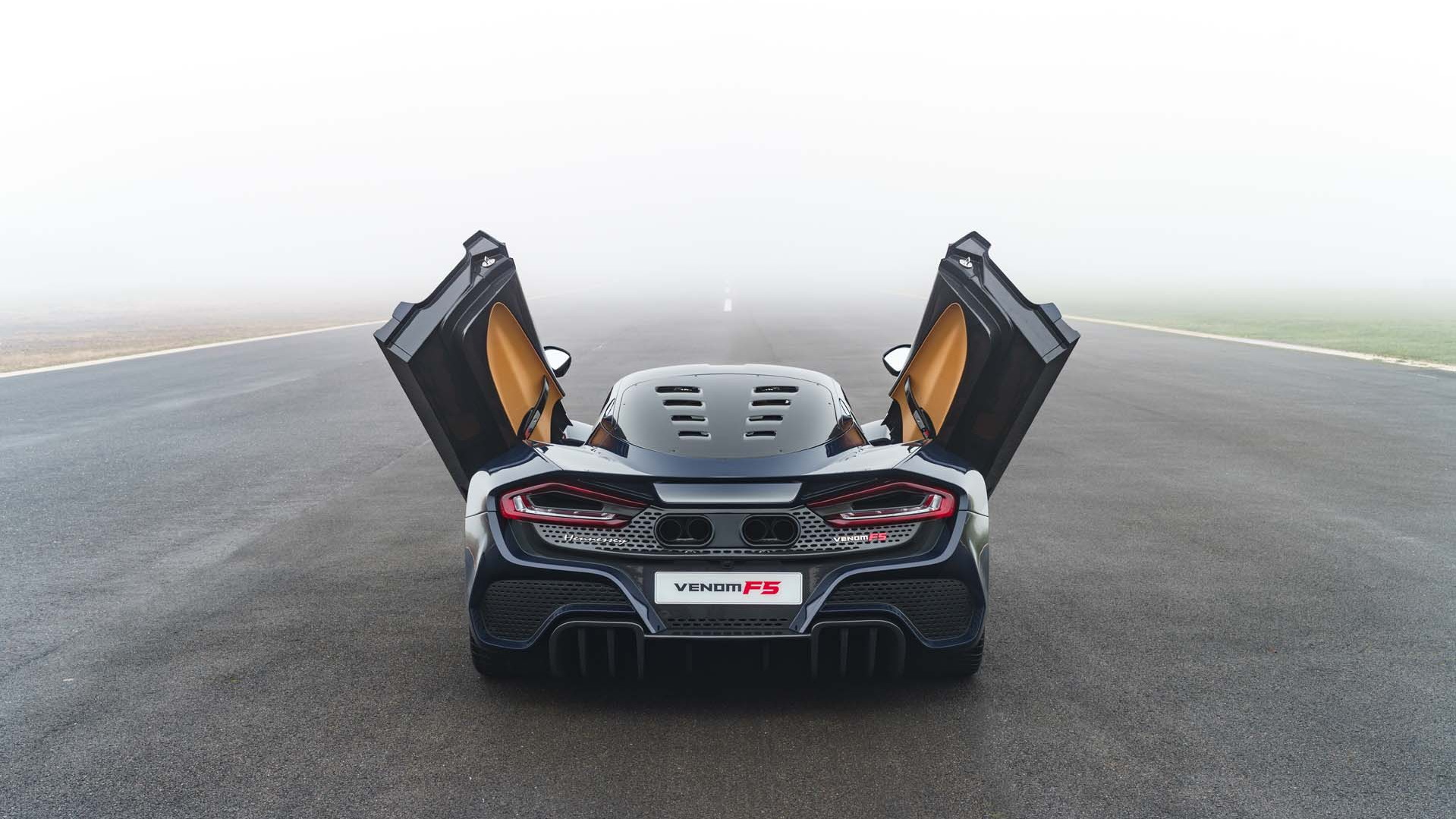 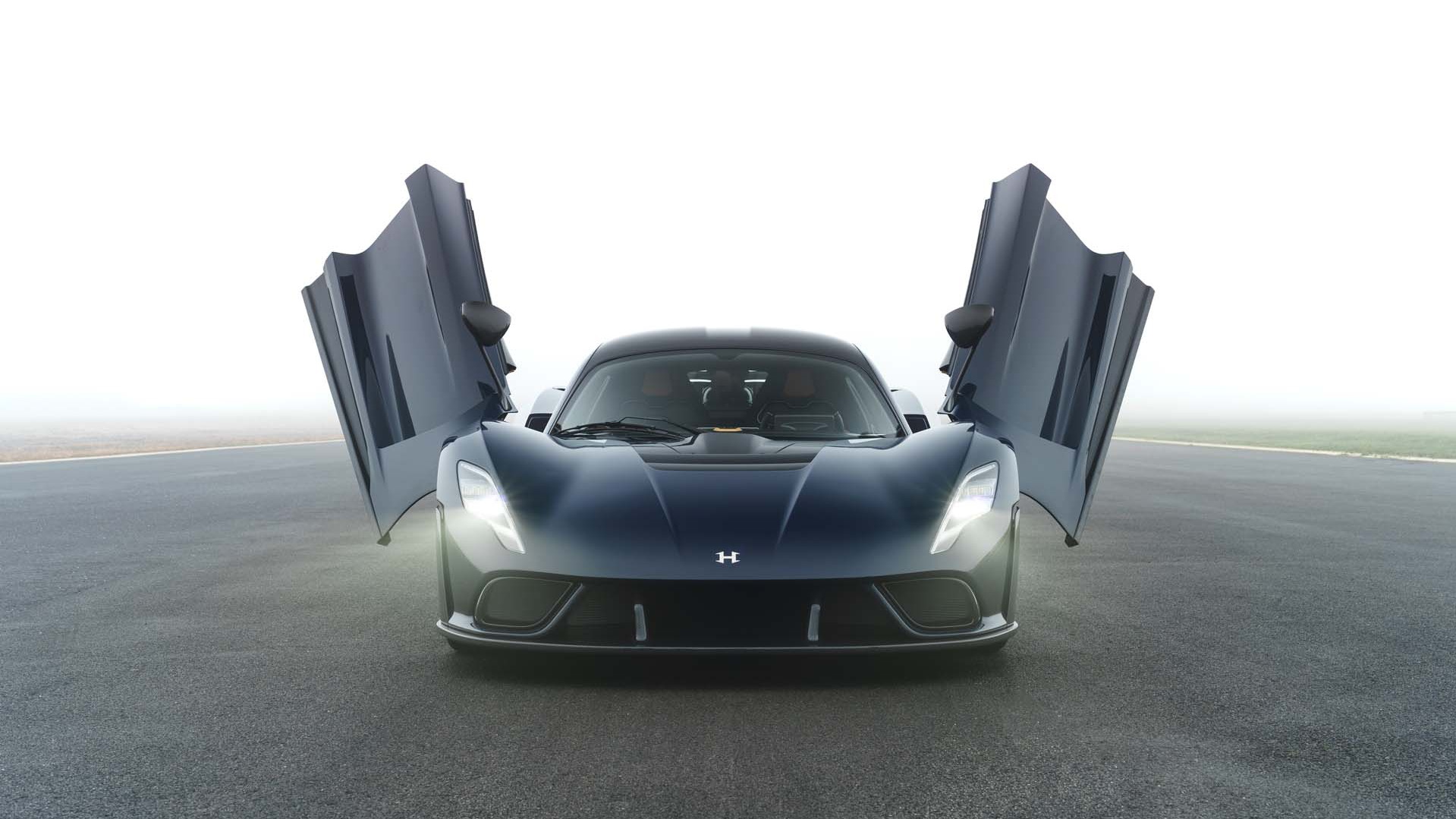 The next challenger in the race to break the production-car land-speed record and blow past 300 mph has arrived from Sealy, Texas, via Silverstone, England. Like everything in 2020, it's complicated.

On Tuesday, Hennessey Special Vehicles (HSV), a new company that is separate from Hennessey Performance Engineering's modification business, revealed the first of 24 production Venom F5 hypercars. With 1,817 horsepower, a race-car like cockpit, and a claimed 334-mph top speed, the Venom F5 is out to prove a team in Texas can build a world-beating hypercar.

VIN 01 of 24 was completed on Nov. 27 in Silverstone. The Speed Devil Blue Venom F5 will arrive at Hennessey's headquarters in January with final calibrations to be completed shortly thereafter. It’s expected to go to its owner in Montana next summer.

The Venom F5 is powered by a twin-turbo 6.6-liter pushrod V-8 that makes a whopping 1,817 horsepower and 1,193 pound-feet of torque. It’s hooked to a CIMA 7-speed single-clutch automated manual transmission. The redline is 8,500 rpm, but the engine is electronically limited to 8,200 rpm outside of a unique F5 mode.

Power is sent to the rear wheels through a mechanical limited-slip rear differential, and the final-drive ratio is 3.167:1. Full power isn’t available at all times; it’s only unleashed in F5 mode and at 140-plus mph as company president John Hennessey told Motor Authority that's the point at which the car has enough traction to fully use the power. It's unclear how much power will be available below 140 mph once calibrations have been completed in early 2021.

Venom F5s will have five drive modes: Sport, Wet, Track, Drag, and F5. Each mode will change the steering weight, power delivery, shift points, and calibrations for the ABS, traction control, and electronic stability control. Only F5 will unlock the full 1,817 horsepower but only after buyers learn how to use it.

"With great power comes great responsibility," Hennessey said. Every Venom F5 owner will need to attend and complete a one-day F5 driver-training program to receive an F5 license and unlock F5 mode. The F5 school is included in the car's purchase price and will take place at Hennessey's private test track next to the Venom F5 production facility in Sealy, Texas.

Hennessey said the hypercar will run from 0 to 62 mph in 2.6 seconds, but that's traction limited. The F5 is capable of running from 0 to 186 mph in 8.4 seconds and 0 to 249 mph in 15.5 seconds, according to Hennessey. Top speed is quoted at over 311 mph, but Hennessey told Motor Authority it's geared for 334 mph. "To be clear, we are not intending to try and run that kind of speed even if the car might have the capability," Hennessey said.

Brian Smith, the director at Ford's Performance Driving School and a former Michelin tire testing engineer, drove the Venom GT Spyder to 265.6 mph in 2016 and will be the hot shoe for the Venom F5’s high-speed runs. Hennessey said the Venom F5 might make a top-speed run on a closed Texas highway in 2021. The high-speed runs will be performed in customer cars.

The F5 is built around a carbon-fiber monocoque that weighs just 189 pounds. A double-wishbone independent suspension sits at all four corners with Penske adjustable coil-over dampers. An electric power steering system was chosen instead of a hydraulic setup due to packaging and simplification. A staggered set of forged aluminum wheels are wrapped in 265/35R19 front and 345/30R20 rear Michelin Pilot Sport Cup 2 tires. The brakes are big, but not massive. They consist of 15.35-inch carbon-ceramic brake rotors at all four corners with 6-piston front calipers and 4-piston rear calipers.

Hennessey plans to perform testing on the Venom F5 at Circuit of the Americas and run the hypercar around the Nürburgring. Hennessey said the Venom F5 should run a sub 7-minute lap around the 'Ring, but no 'Ring record attempt is planned.

Hennessey unveiled the Venom F5 design buck at Pebble Beach in 2017 and said the car would have a price tag of $1.6 million. That price climbed to $1.8 million for anyone who hadn't locked in their order in January 2020. Now, the price has climbed to $2.1 million for the 12 remaining build slots.

The exterior design, which Hennessey said was inspired by the McLaren F1, hasn't changed much from the 2017 design buck. We see some Ferrari and McLaren in the design with the low front end and rising beltline, but the details are unique to the Venom F5. The carbon-fiber tub is partially exposed, and the rear features CNC-machined carbon-fiber mesh.

Hennessey designed the Venom F5 in-house, while the engineering was done in partnership with Delta Motorsport in England. Aerodynamics were handled by TotalSim out of the United Kingdom. Veteran General Motors engineer John Heinricy came out of retirement to lead development of the Venom F5.

The most significant difference from design buck to production is aerodynamics. The design buck had a coefficient of drag of 0.33 while the production car has a 0.39 cd. Hennessey's team realized during aero development the original design didn't provide enough downforce in the rear at 300 mph, and the aggressive front splitter and rear wing created too much drag. The production car's rear deck was raised 3.9 inches and a smaller rear wing was used to create enough downforce at max speed. The front was balanced with a less aggressive splitter.

Customers who like the original design buck's more aggressive front splitter and larger rear wing can opt for the $100,000 Track Package option, which also includes a unique rear deck as the larger rear wing attaches to the chassis through the rear bodywork. Every customer so far has opted for the track pack, and Hennessey's happy to show customers how to swap in the more aggressive aero kit. It takes about an hour.

Every one of the 24 Venom F5s built will roll off the assembly line in the same configuration aside from paint, stripes, and the optional $300,000 exposed carbon-fiber body panels.

The interior of the Venom F5 is sparse. The fixed-back carbon fiber bucket seats are covered in Muirhead leather, and most of the interior surfaces are exposed carbon fiber. Every button, switch, knob, and control is located on the F1-like carbon-fiber steering wheel. A 7.0-inch digital gauge cluster is complimented by a 9.3-inch Alpine touchscreen infotainment system with Apple CarPlay and Android Auto compatibility. A separate 1.3-inch touchscreen handles climate controls.

Each Venom F5 will be street legal through the "Show or Display" rules just like the McLaren Speedtail.

Buyers anywhere in the world can order the 12 remaining Venom F5s. Of the 12 sold so far, eight are U.S. cars and four will go overseas.

Hennessey said it will take two to three years to build and deliver all 24 Venom F5s, and each hand-built car will take nine to 12 months to complete, but that could drop to six months later in the production run.