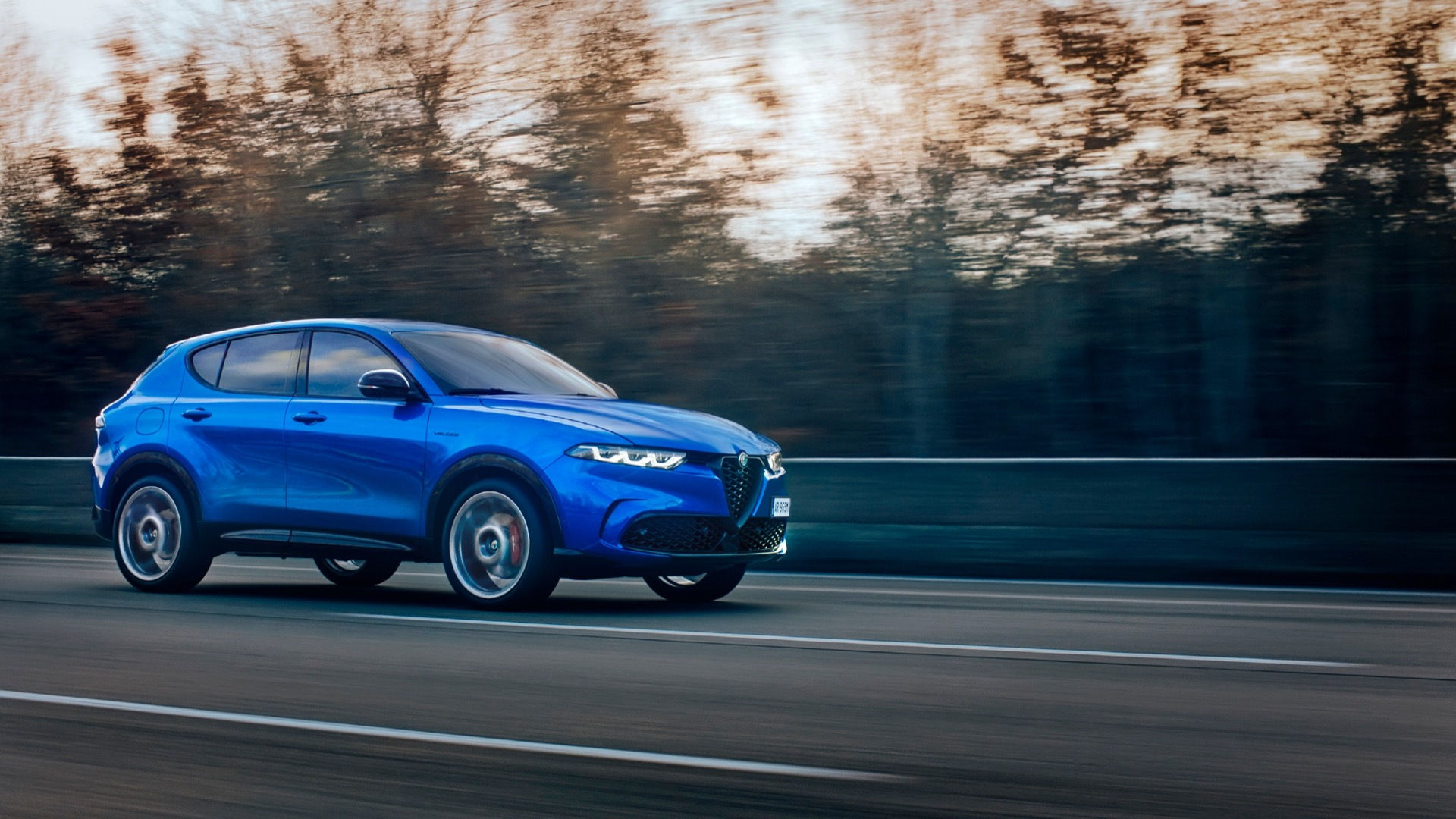 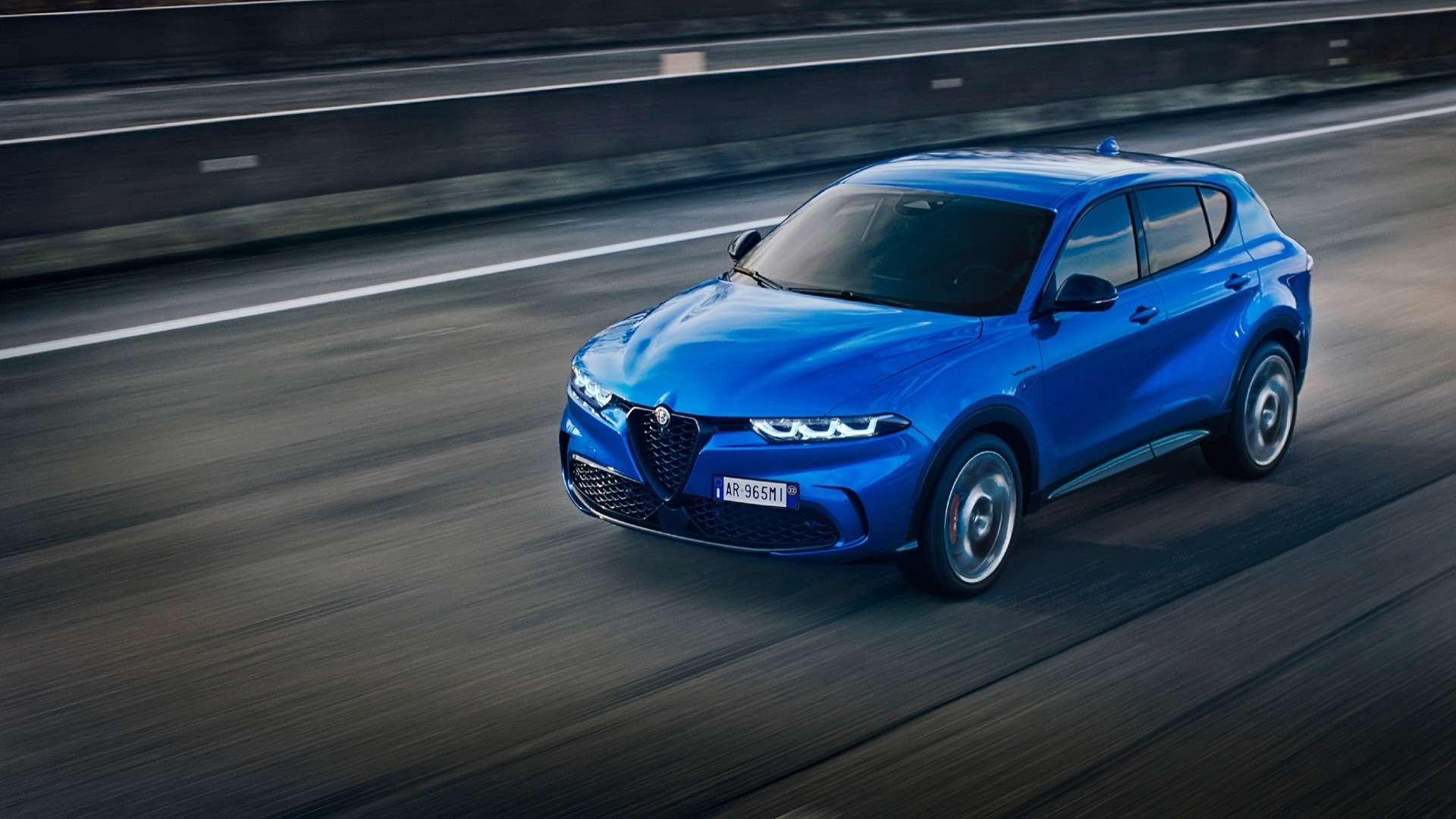 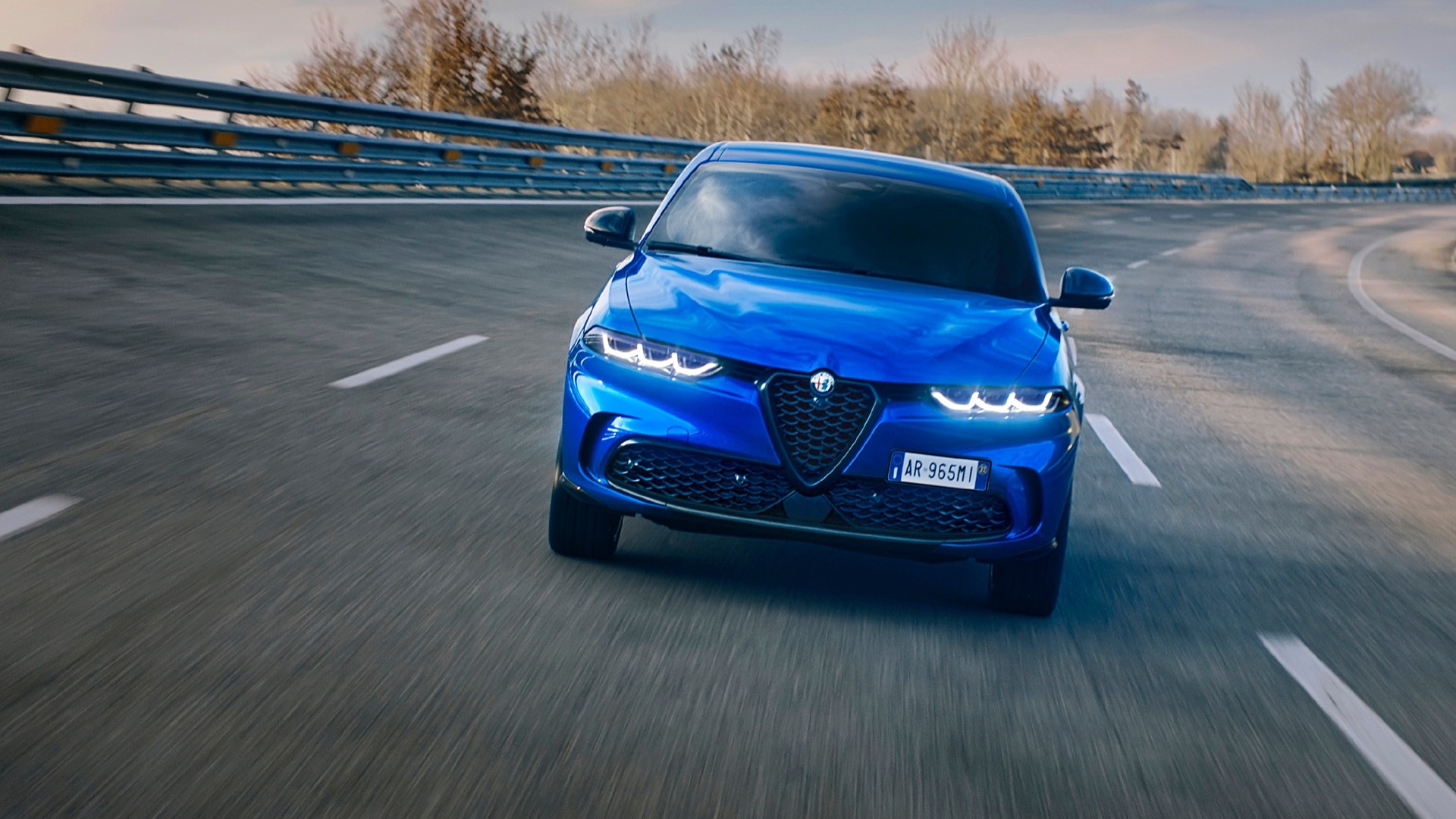 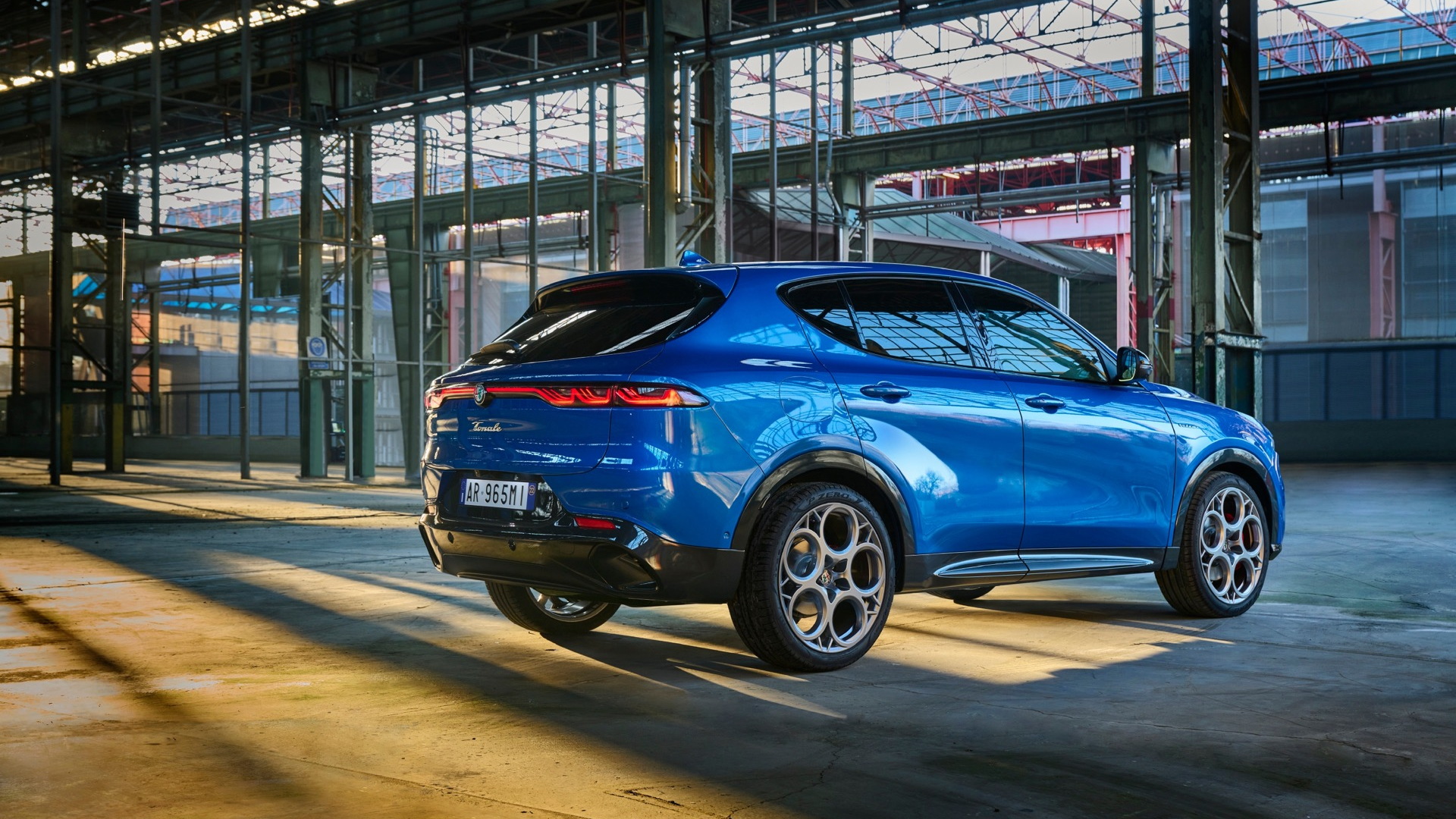 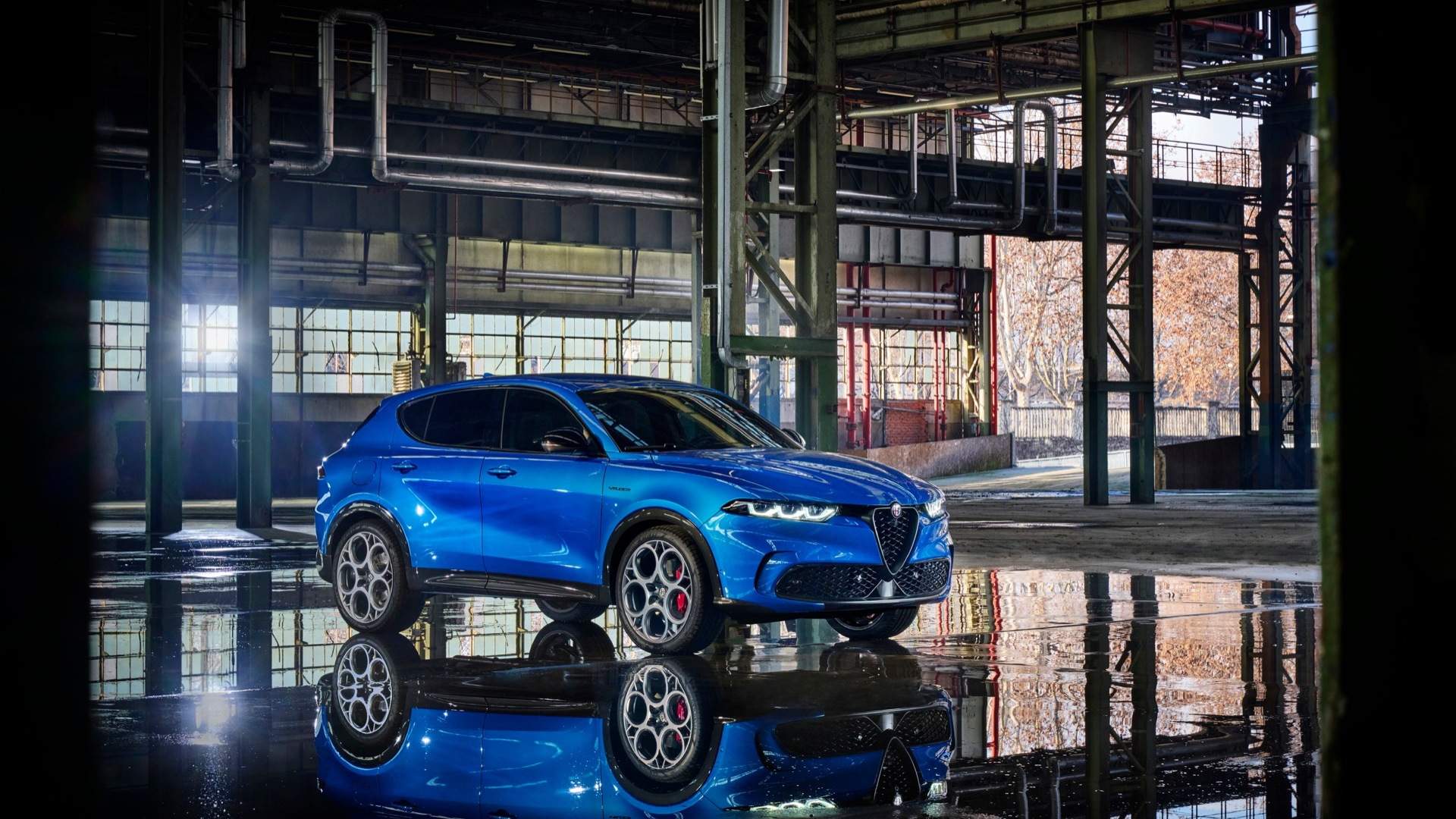 The 2023 Alfa Romeo Tonale small crossover arrives at an inflection point for the small Italian brand with big global ambitions. Dubbed La Metamorfosi at the Tuesday world premiere, the metamorphosis led by the Tonale aims to take the brand from its performance heritage into its electrified future.

“It’s the first electrified Alfa Romeo and it moves us to a future that will be pure battery electric vehicles very quickly,” Larry Dominique, Head of Alfa Romeo and Fiat North America, said in an interview with Motor Authority.

With a plug-in hybrid powertrain for North America and a mild-hybrid engine in Europe, the Tonale presages the small brand’s first electric vehicle planned for 2025 before the Stellantis premium brand goes all electric by 2027. The technology introduced in the small crossover also catches up to the present with over-the-air updates, a Level 2 driver-assist system, and an NFT encrypted ID that will show all the service actions performed on the vehicle for peace of mind in the secondary market.

On its surface, however, the Tonale wears its Alfa DNA on its broad-shouldered sleeves. Chief designer Alessandro Maccolini describes Tonale as embodying “where the human spirit aims to surround itself with beautiful things.”

That’s as Italian as Garibaldi. With its front wheels pushed to the edge and an angled rear end that looks as if it were carved out of the mountain pass that bears its name, the production model reflects the concept that debuted at the 2019 Geneva motor show. Up front, Alfa’s classic tri-shield buttons a nose flanked by a thin band of three LED headlights underscored by a wave of daytime running lights. The lights fade into a high body line running over Alfa’s classic telephone-dial wheel designs (from 17 to 20 inches). That “GT Line” honors the Giulia GT Junior from the 1960s. The line culminates in the taillight signature, which follows the same LED wave in triplicate, bridged by a single light bar through the man-eating snake on Alfa’s badge. It’s modern yet classic.

Unlike other crossovers with a vertical hatch, the Tonale has the integrated roof spoiler and raked rear windshield of its larger sibling, the Stelvio. Launched for 2018, the last new Alfa before the Tonale measures a half-foot longer. They both seat five in theory, but Alfa isn’t concerned with Tonale cannibalizing sales from the Stelvio; Alfa sees it conquesting sales from the BMW X1 and Mercedes-Benz GLA-Class.

At 178.3 inches long, the Tonale stretches out a few inches farther than those rivals, but rides low with a height of just 63.0 inches. Although it shares a factory and loosely shares a platform with the Jeep Renegade and Fiat 500X, it measures longer, lower, and wider, and it appears roomier, though Alfa didn’t disclose cargo or passenger volume.

The Tonale rides on what Alfa calls a strong evolution of the old FCA platform that is unique except for the central part of the floor. Alfa started a new assembly line in a new plant utilizing more aluminum and added a MacPherson strut suspension, a new steering rack, and a new electrical architecture. Additionally, the track was widened to look more like the concept.

“There’s a lot of variability baked into (the platform) that adds a greater level of performance than you get in more pedestrian applications of the same platform,” Dominique said. “So, when you differentiate you end up with a greater number of unique parts for your product, but you’re still sharing the core, which is where a lot of the efficiencies come from.”

Four powertrains will be offered on the global Tonale, but the two distinct to the North American market are higher powered and come with standard all-wheel drive. The base engine, a 2.0-liter turbo-4 making 256 hp and 295 lb-ft of torque, is part of the GME family of engines used in the base Alfa Romeo Stelvio and Giulia, as well as in Jeep vehicles such as the Wrangler. It will be offered on base Sprint and Ti Tonales.

The premium powertrain on the top Veloce grade is a plug-in hybrid with an estimated 30-mile all-electric range. It’s an interesting Frankenengine with an internal combustion engine from the Fiat 500X and electrified components from elsewhere in the Stellantis family. A 1.3-liter turbo-4 “Firefly” engine powers the front wheels, and a 90-kw motor powered by a 15.5-kwh lithium-ion battery pack musters the rear wheels for a total output of 272 hp. The battery pack is larger and provides more range than the 14.0-kwh pack used in the Jeep Wrangler and Grand Cherokee 4xe models, but those systems use two motors and a larger engine.

The Tonale PHEV comes with a 6-speed automatic transmission and three drive modes that alter engine and electric power, and also tweak steering, braking, and suspension dynamics. Hydraulic dampers in the shocks promise to adapt to road surfaces, and electronically controlled adaptive dampers are available. similar to what’s offered in the Stelvio. Tonale boasts a quick steering ratio of 13.6:1 (though not as quick as the Stelvio), and four-piston Brembo front brakes should add confidence.

The DNA drive mode selector found in other Alfas makes a home in the center console below the horizontal spread of the dash. Circular vents bookend the dash, and a flat-bottomed steering wheel and available aluminum paddle shifters give way to the cannocchiale—that’s Alfa for infotainment. The Uconnect5 operating system shared with other Stellantis vehicles powers a customizable 12.3-inch digital cluster that abuts a 10.3-inch touchscreen canted toward the driver. Wireless Apple CarPlay and Android Auto are included, along with Amazon Alexa, and over-the-air updates promise to keep it fresh.

Alfa didn’t disclose pricing or a features list for the three trims, but the Tonale will be equipped with advanced driver-assist features such as automatic emergency braking with pedestrian and cyclist detection, blind-spot monitors, active lane control, and adaptive cruise control. A surround-view camera system will also be offered.