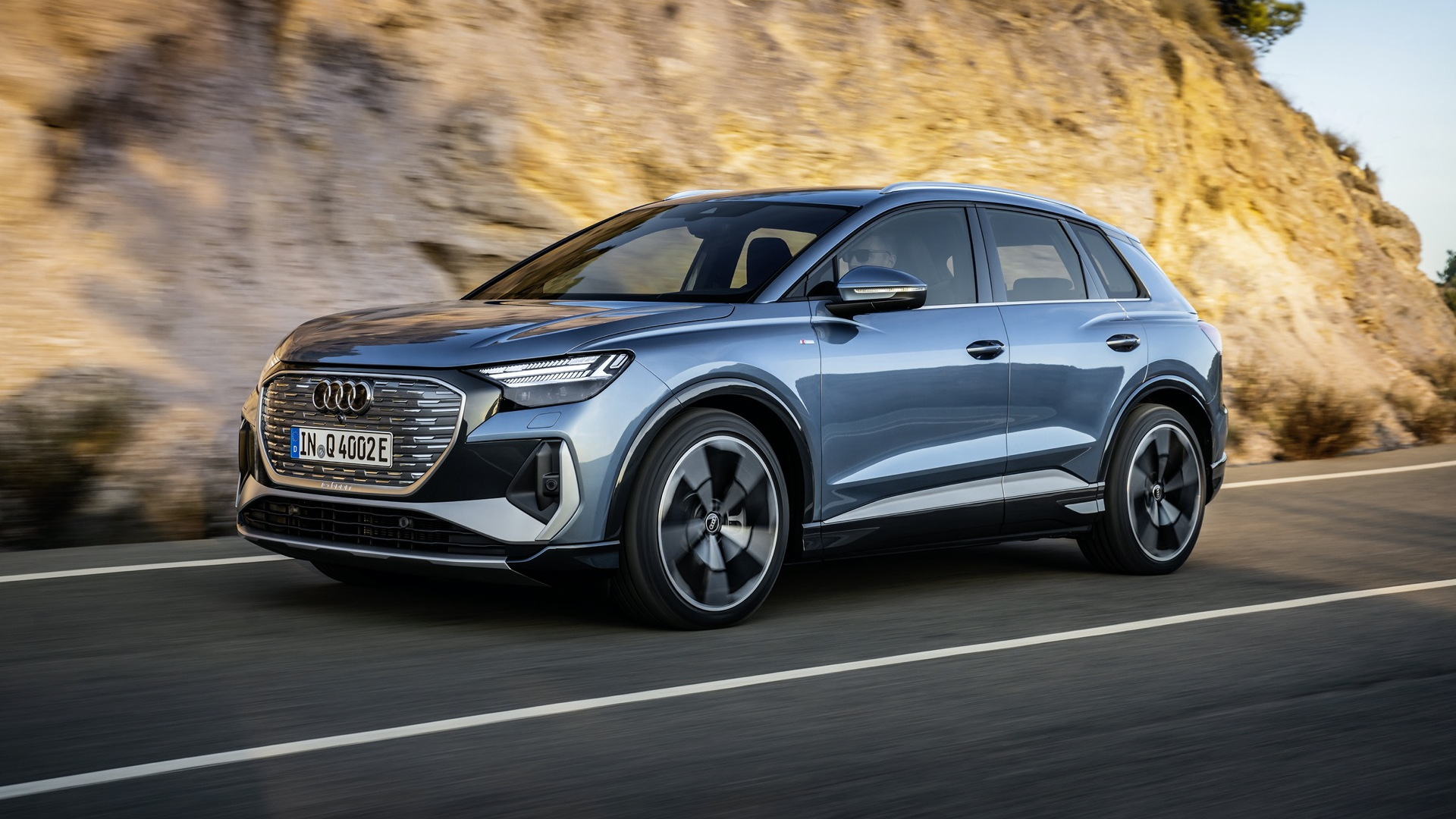 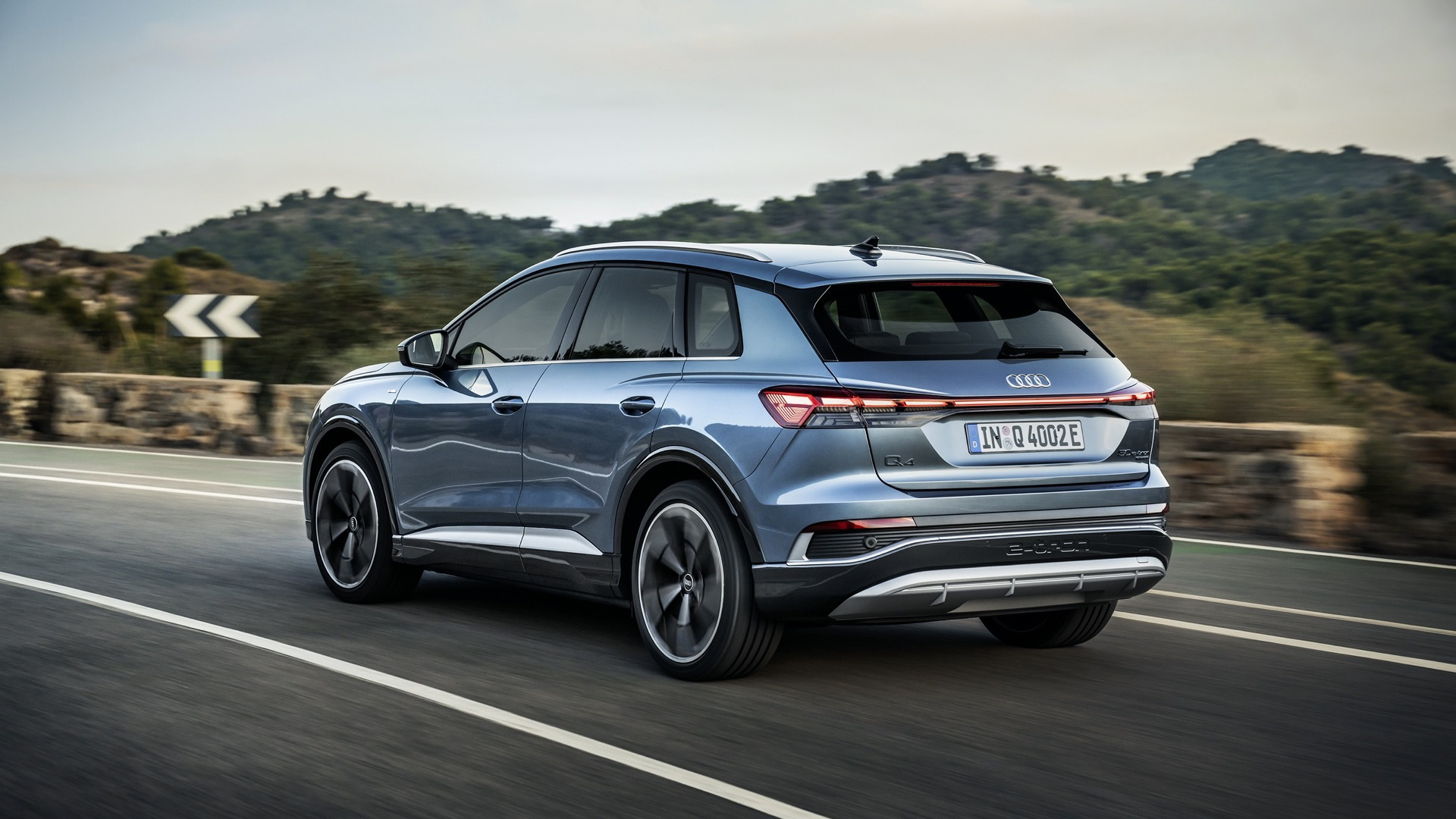 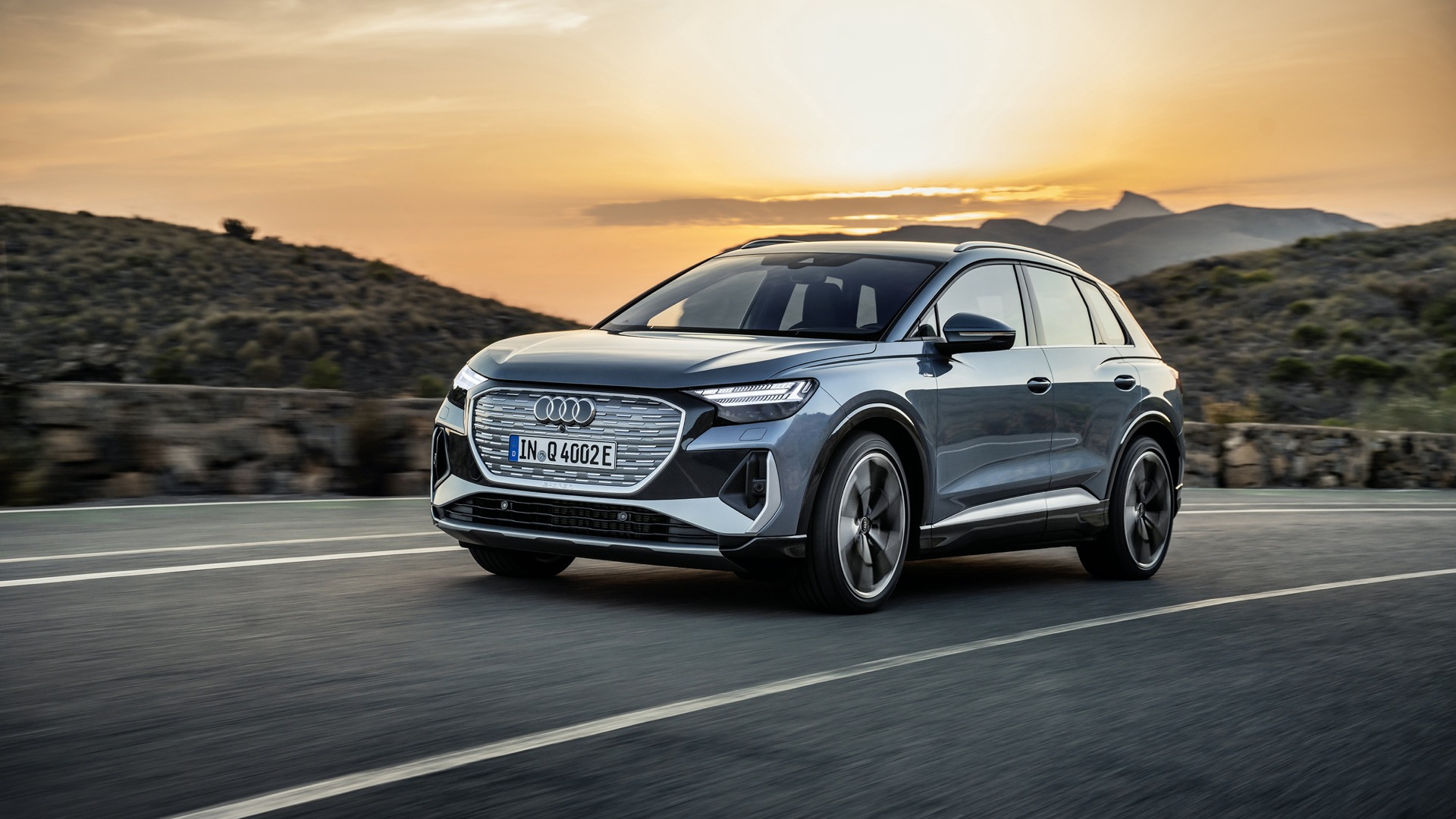 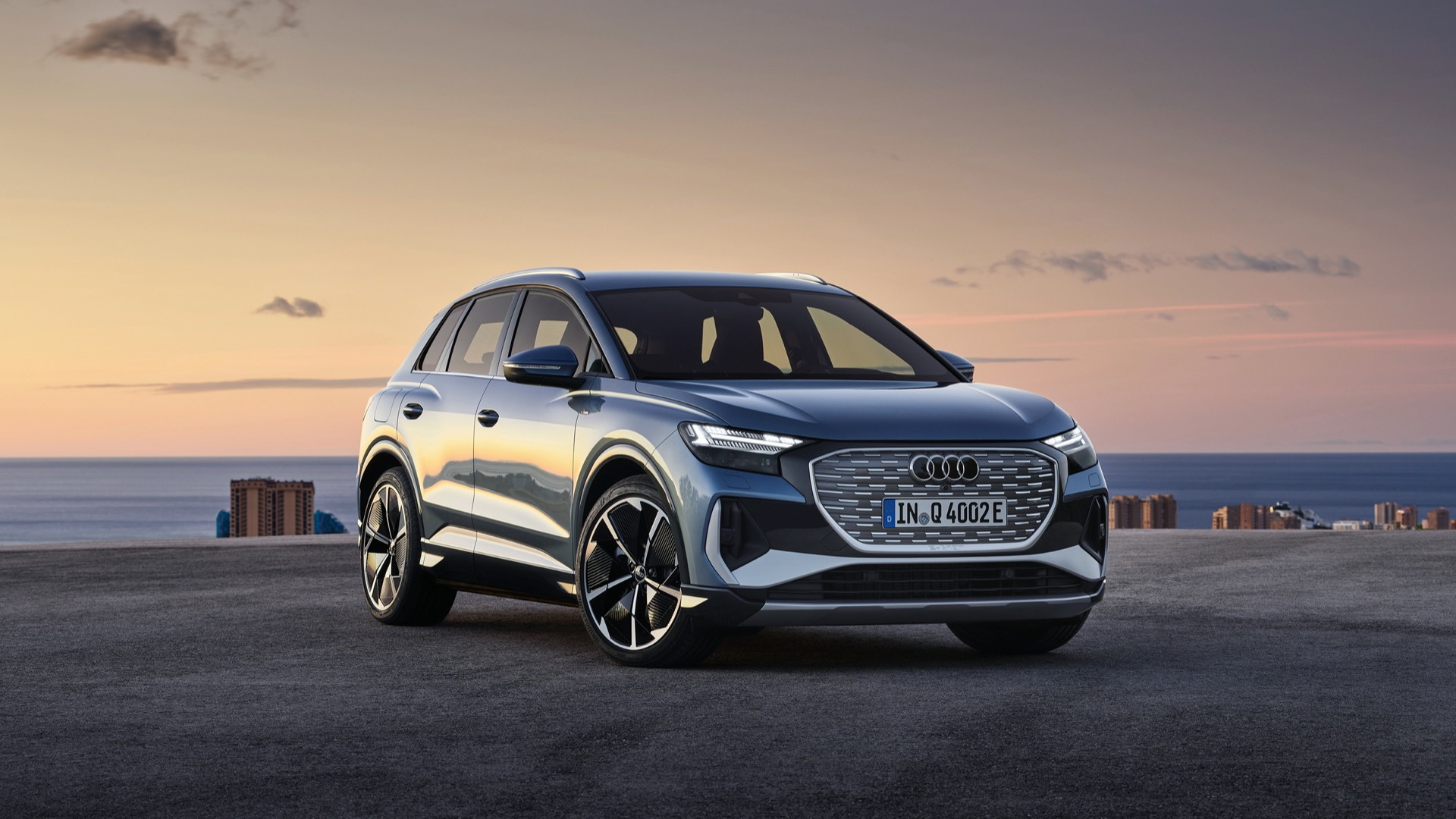 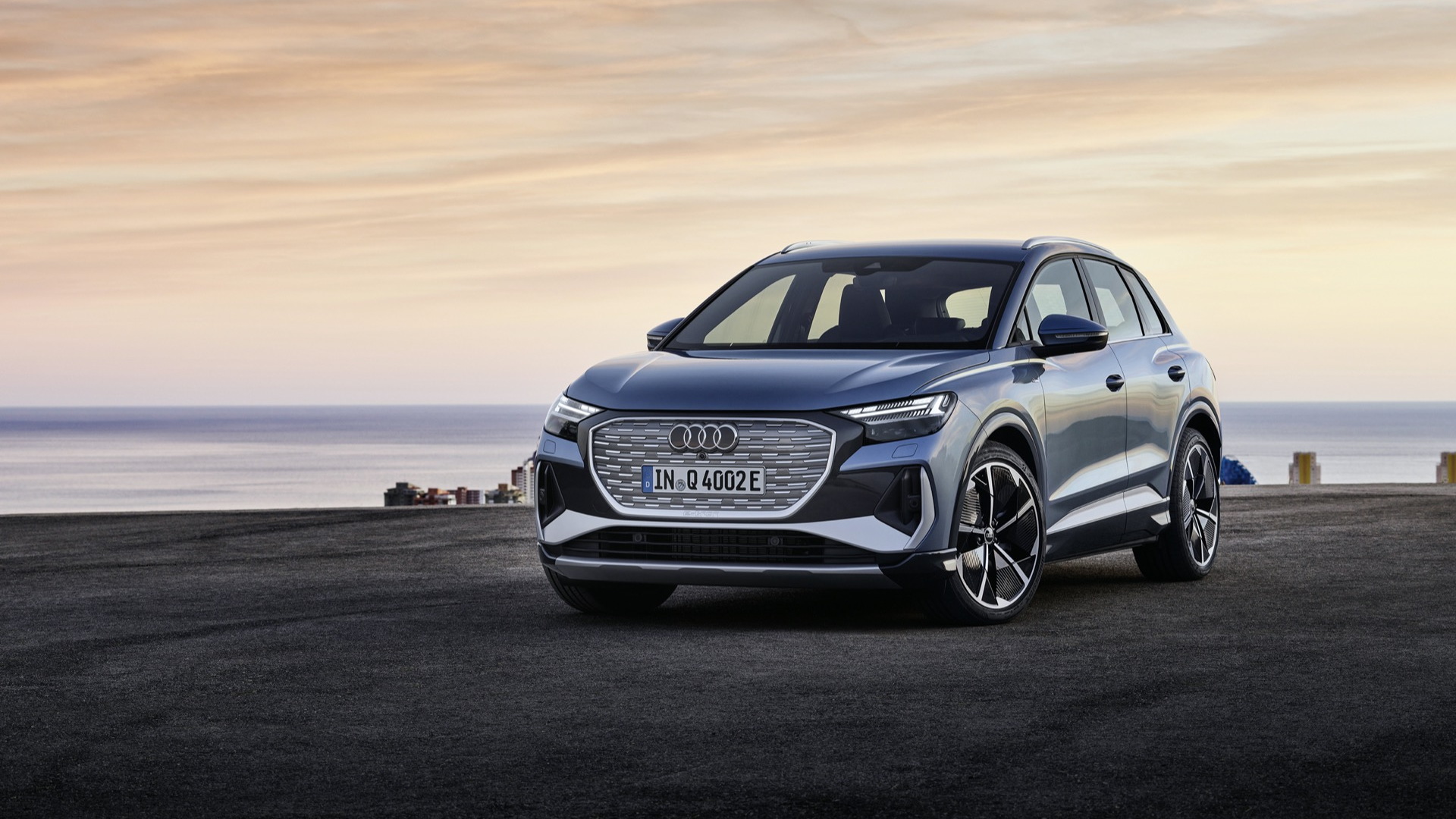 Audi on Tuesday released U.S.specifications for the new Q4 E-Tron battery-electric compact crossover, in both regular and more rakish Q4 Sportback E-Tron guises. They will cost $44,995 when they reach dealerships toward the end of the year as 2022 models.

The Q4 E-Tron is a smaller sibling to the E-Tron that was launched for 2019, Audi's first volume electric vehicle and the model that set the tone for future EVs from the brand with the four rings. Since then we've seen the arrival of the E-Tron Sportback and E-Tron GT, and now the new Q4 E-Tron duo.

The Q4 E-Tron is the corporate cousin of the recently launched 2021 Volkswagen ID.4, with both vehicles designed around Volkswagen Group's MEB modular platform for mainstream electric vehicles.

There's nothing mainstream about the Q4 E-Tron, however. The vehicle sports concept car looks and an interior that's every bit as good as what you find in high-end Audis. For instance, there's a digital instrument cluster (10.25 inches) and touchscreen display (10.1 inches) in the dash, plus a sport steering wheel with touch-sensitive controls.

The real highlight is what you don't see. That is until you're out on the road. Audi is making an augmented reality head-up display available on the Q4 E-Tron. The HUD system displays information on the windshield in two sections and should prove especially handy when using the navigation. For instance, a dynamic floating arrow appears to guide you to correct turns and exits. Because of the way the image is projected, it appears as though it is ahead of the vehicle, allowing for real-world road features to be clearly highlighted.

The HUD can also display important traffic information. This should be especially helpful in low visibility conditions. For instance, as you approach a vehicle ahead, a light bar will appear to highlight the other vehicle. Other light bars will highlight important road features like lane markings, preventing you from drifting into another lane.

Beyond the tech, buyers will also be able to opt for typical Audi premium features like sport seats lined in Nappa leather. Given the roominess of the related ID.4, we expect the Q4 E-Tron to be comfortable for adults regardless of whether they sit up front or in the back. The vehicle measures 180.6 inches long, 73.4 inches wide, and 63.5 inches high, with a wheelbase of 108.7 inches. That's about the same length as the ID.4 but almost 6.0 inches shorter than the rival Tesla Model Y. Maximum storage is 51.5 cubic feet with the rear seats folded flat. Note, the Q4 Sportback E-Tron will naturally have less space than the Q4 E-Tron due to its lower roof.

In the powertrain every U.S. Q4 E-Tron will be powered by an 82-kwh battery. The base rear-wheel-drive 40 grade will have 201 hp and 229 lb-ft of torque delivering a top speed of 99 mph and 0-60 mph sprint of 7.9 seconds. Audi is quiet on the range for this entry-level model so far.

The top 50 grades have two electric motors, one on each axle, for all-wheel drive and a total power output of 295 hp and 339 lb-ft of torque. Top speed for these models increases to 112 mph while the 0-60 mph time drops to 5.8 seconds.

For the United States, Audi has confirmed we'll see the 40 and 50 grades only. EPA-rated range will be announced closer to the market launch, but Audi said to expect an EPA-estimated 241 miles on the 50 grades. The 50 grade will likely have a lower range due to its extra performance and all-wheel drive.

Production of the Q4 E-Tron and Q4 Sportback E-Tron is being handled at VW Group's plant in Zwickau, Germany.