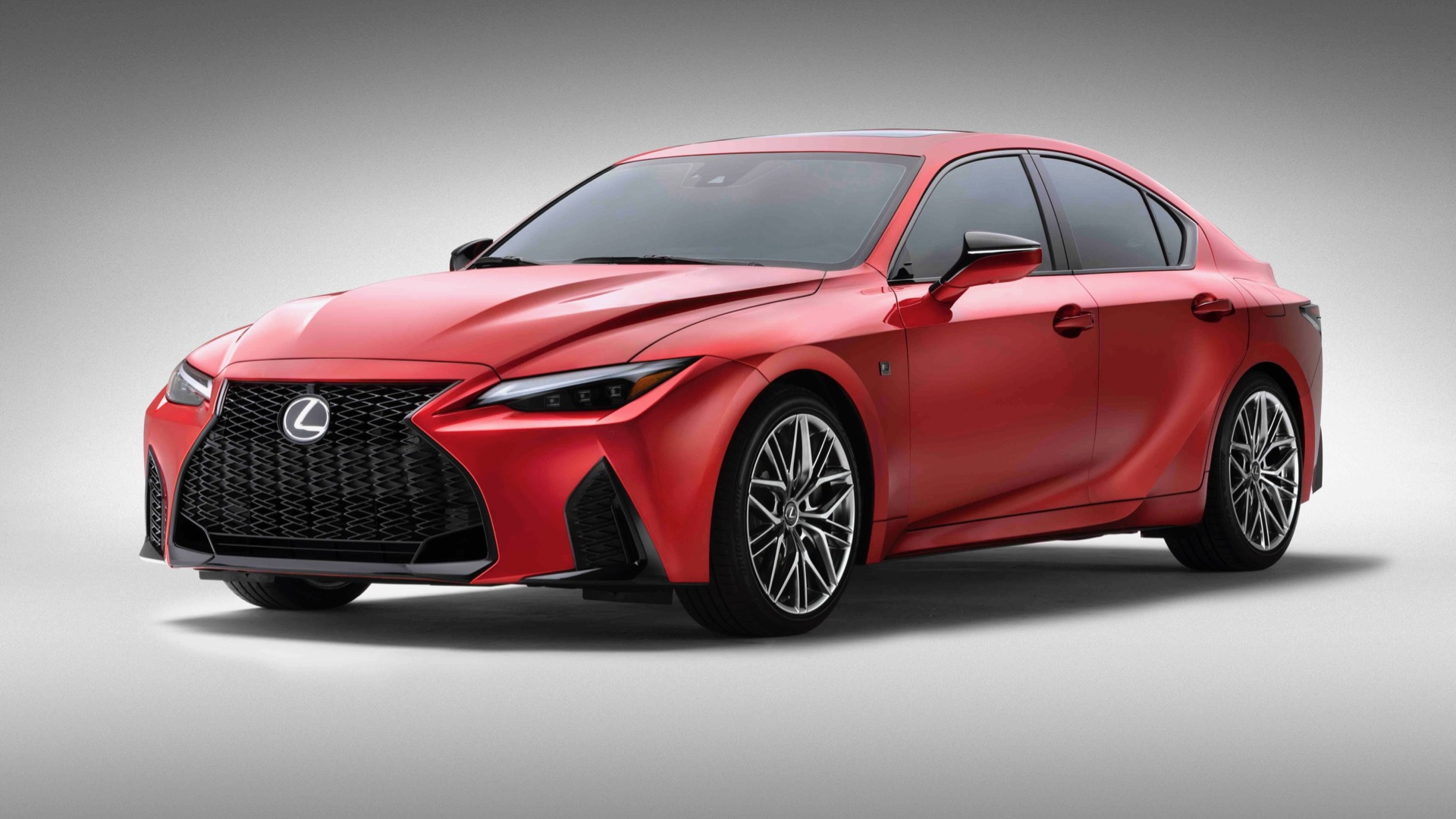 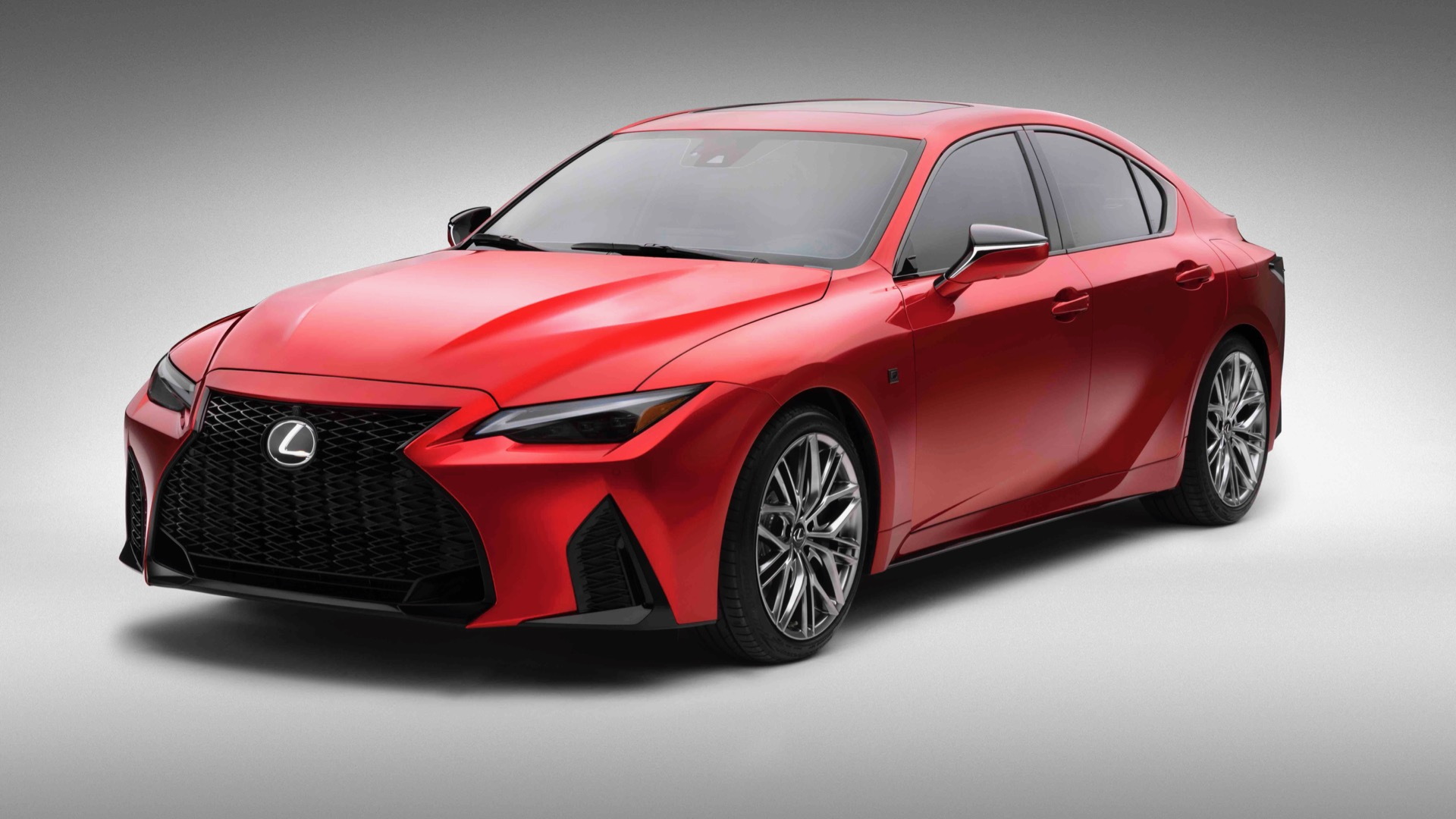 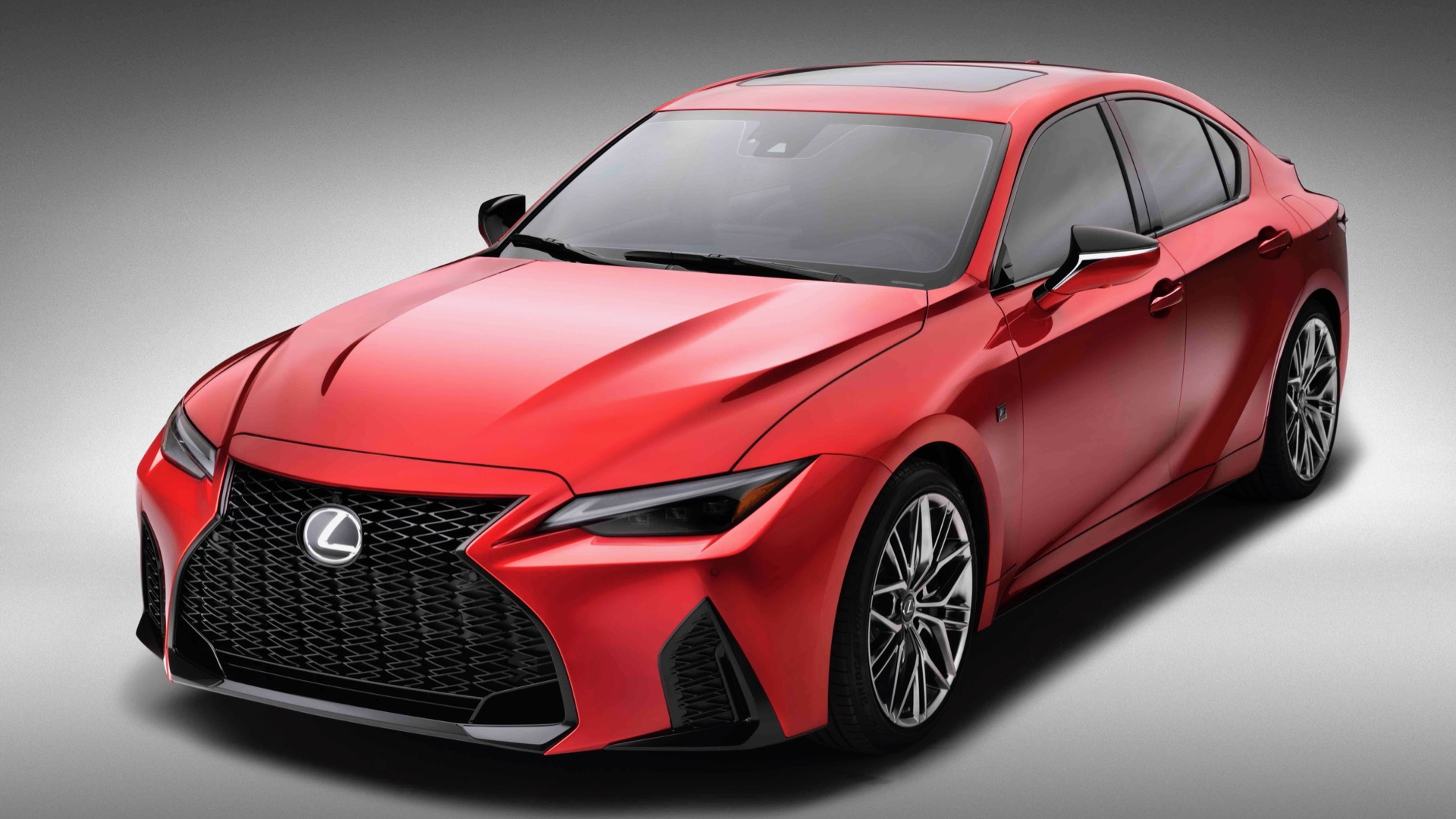 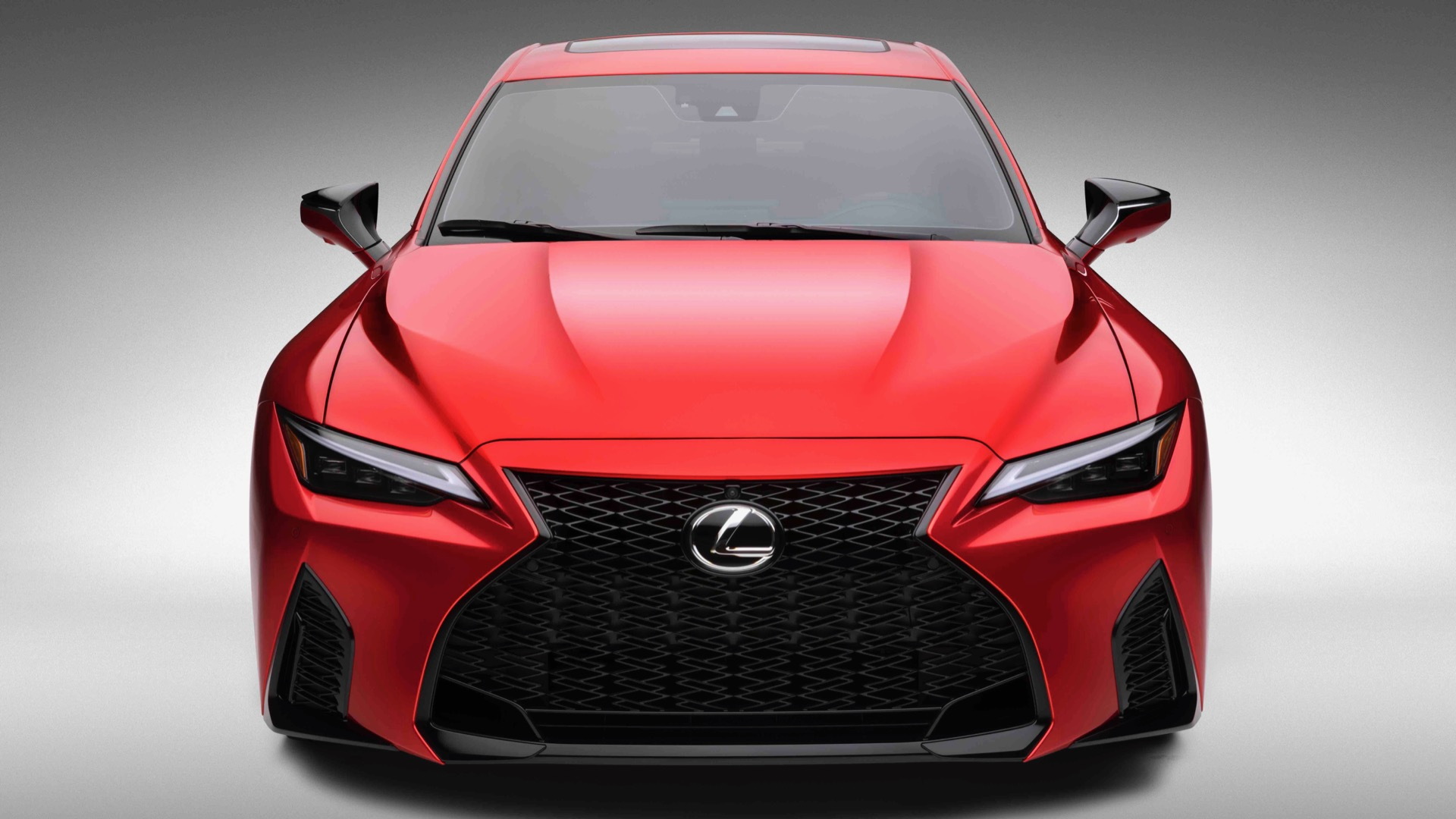 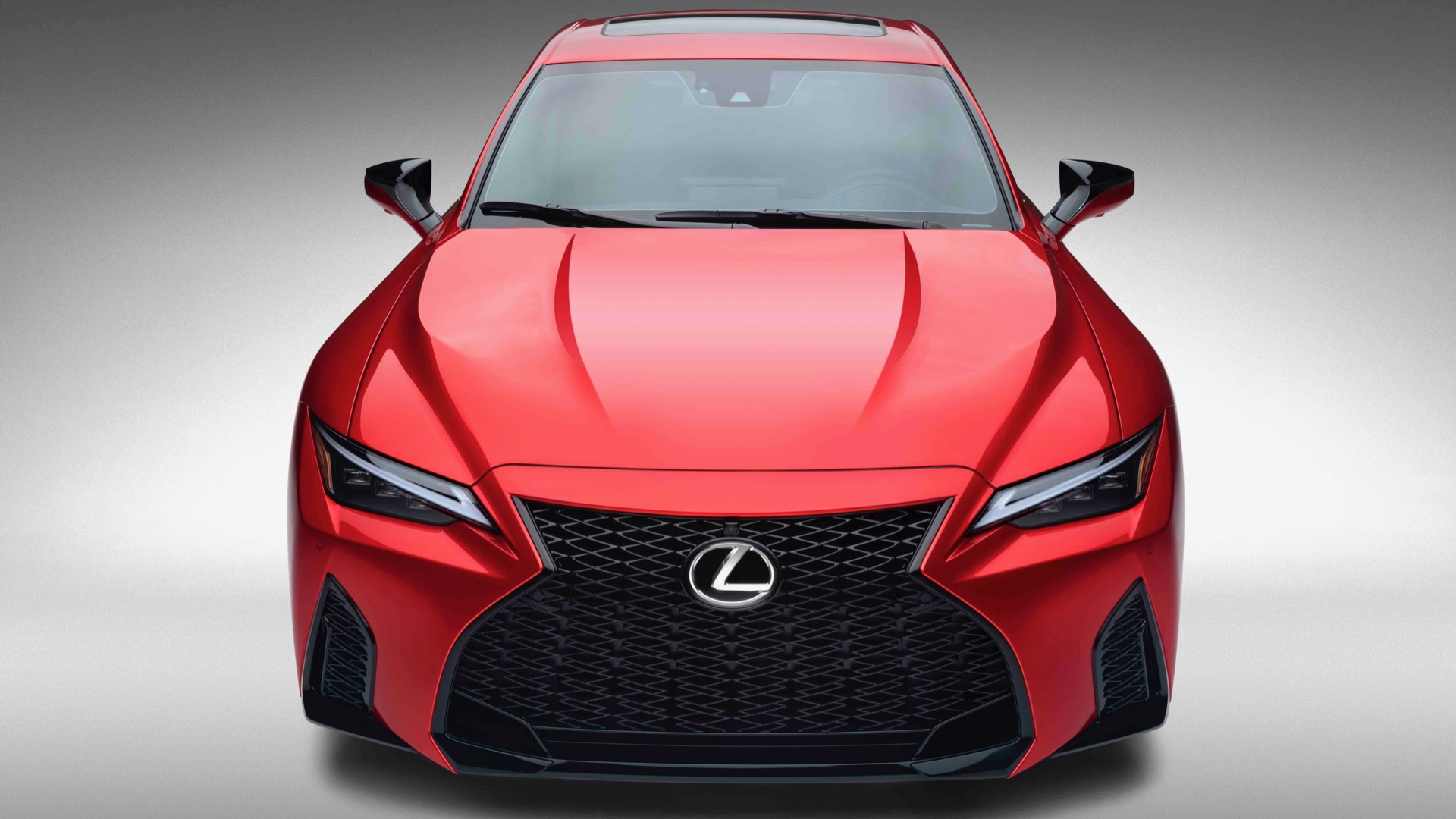 The Lexus IS suffers from fundamental flaws in backseat space and  interior controls that won’t be resolved until the car gets a full redesign. However, that doesn’t mean Lexus can’t make the car more fun. With the addition of the 2022 Lexus IS 500 F Sport Performance model, Toyota’s luxury brand is covering its compact sedan’s foibles by jamming a giant V-8 under the hood. To my surprise, it almost works.

This isn’t the first V-8 to make its way into the IS. That distinction belongs to the IS F, which debuted with styling straight out of a tuner magazine in 2008. The IS 500 is much more subtle than that car, lacking the same “F” badging and dramatic body folds that the IS F once featured. Tweaks are instead subtle, with four small exhaust tips, a slightly beefed up hood bulge, a front bumper pulled forward to fit the larger engine, and new 19-inch Enkei ten-spoke wheels.

Pop open the hood and the engine takes up practically the whole bay, with barely any room on all sides. The same 5.0-liter V-8 can also be found in the RC F and the LC 500 and in this application it produces 472 hp and 395 lb-ft of torque. It also shares a transmission with the RC F, an 8-speed automatic with a lockup torque converter.

The best part of the rear-wheel-drive IS 500, the V-8 produces easy power and a throaty exhaust note that enhances the driving experience. This is old-school V-8 performance, devoid of the forced induction found in most performance cars today. The V-8 doesn’t deliver immediate punch the way a turbocharged powertrain would. Rather, its power unwinds as the rpm levels climb. Lexus quotes a 0-60 mph time of 4.4 seconds, which felt about right. But the IS 500 isn’t at its best off-the-line. It’s most happy on a curvy road with its revs held right at around 3,000 and the exhaust snarling in its wake. Even when winding it out the engine never really feels taxed. It just pulls and pulls up to its 7,300 rpm redline.

Despite the addition of the V-8, the IS 500 doesn’t gain that much weight. It adds 143 lb over the IS 350 F Sport and its V-6 for a total curb weight of 3,891 lb. The extra weight up front doesn’t make the nose  feel heavy on turn-in. On my drive through the canyons above Malibu, California, it did exhibit a little understeer on a series of tight hairpins, but not enough to be alarming.

Compared to the IS 350 F Sport, the IS 500 gets larger brakes with opposed four-piston front brakes with 14.0-inch two-piece aluminum rotors and a single piston rear with 12.7-inch rotors. They provide excellent stopping power with no front end wiggle even during a panic stop.

The IS 500 comes standard with the Dynamic Handling package that's normally an extra-cost option on rear-wheel-drive IS F Sport models. It includes adaptive dampers and a Torsen limited-slip differential, plus a laterally mounted Yamaha performance damper that strengthens the structure for low-speed comfort and high-speed agility and stability.

With the suspension in its Normal setting, the IS 500 is an amazing cruiser, gliding on the highway and holding all of that horsepower at the ready for fly-by passes. Crank the car into Sport or Sport+ and it tightens up nicely, giving the car a solid feeling through turns. There’s still some body roll, and the suspension doesn’t quite reach the taut feeling of other sport sedans, but even in the Sport modes it still has a comfortable ride and the IS 500 never feels rough.

The steering has good weight, a fix over the pre-2021 refresh IS models I tested that were overboosted and floaty. But I found it’s desperately light on feedback. I longed for some sense of how the front wheels were behaving through turns, and that made me dial back the pace on curvy roads. It was simply too hard to be confident at the pace I wanted to drive. Every time I’d let that get me down the V-8 would roar to life on corner exit and for a blissful second I’d turn forgetful.

I do prefer the way the IS 500 drives compared to the RC F. Surprisingly, the IS 500 is lighter than its two-door counterpart by 55 lb, and its chassis feels more stable and locked down at speed. I also find the RC F’s steering to be more vague and the limits of its grip harder to detect. There’s something about the bones of the IS that make it more suited to hard cornering than the RC F, even though both have variable suspensions and limited-slip differentials. The RC F still enjoys a wide advantage in the looks department, but the fact that it’s more expensive and the IS 500 feels more agile turns me toward the sedan.

As much  as the V-8 makes the IS 500 fun to drive, the rest of the IS’s problems remain. The backseat is cramped, without good sightlines for passengers. Most notably, the multimedia system is still a mess. Though the 10.3-inch display atop the dash is now a touchscreen, its location hasn’t shifted and it’s quite a stretch from the driver’s seat to reach it. The touchpad on the center console remains, but it’s still a frustrating way to interact with the car’s functions. Even within the system, the navigation maps look low resolution and dated, like something out of a car built in 2012 more than 2021. The new screens and interface seen earlier this year in the forthcoming NX crossover can’t make their way to the rest of this lineup fast enough.

This makes the IS 500 a hefty $13,550 markup over the RWD IS 350 F Sport, which starts at $44,025 for the 2021 model year. But the new car does feature the Dynamic Handling package standard and that costs $4,200 on the IS 350, closing the gap significantly. The addition of the V-8 so fundamentally changes the nature of the IS 500 that the added cost will be worth it for those who still want some good, old-fashioned V-8 power. Throwing a big engine at a car won’t solve all of it’s problems, but it does make it damn entertaining.

The 2022 IS 500 F Sport Performance will make its way to dealerships this fall, with Launch Edition (finished in a unique Incognito gray paint) and Premium models leading the charge.

Lexus provided three days with an IS 500 for Motor Authority to bring you this firsthand report.