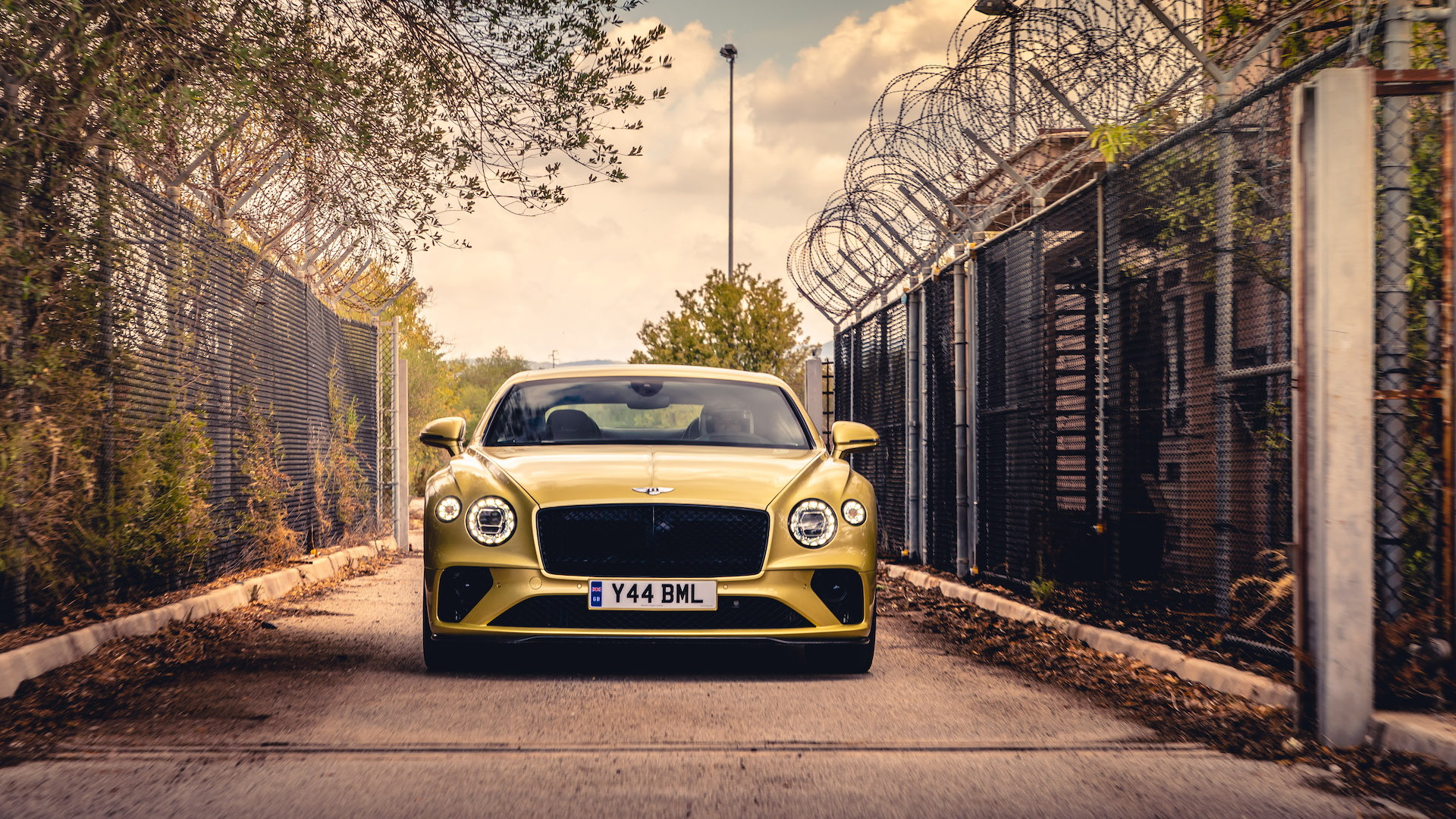 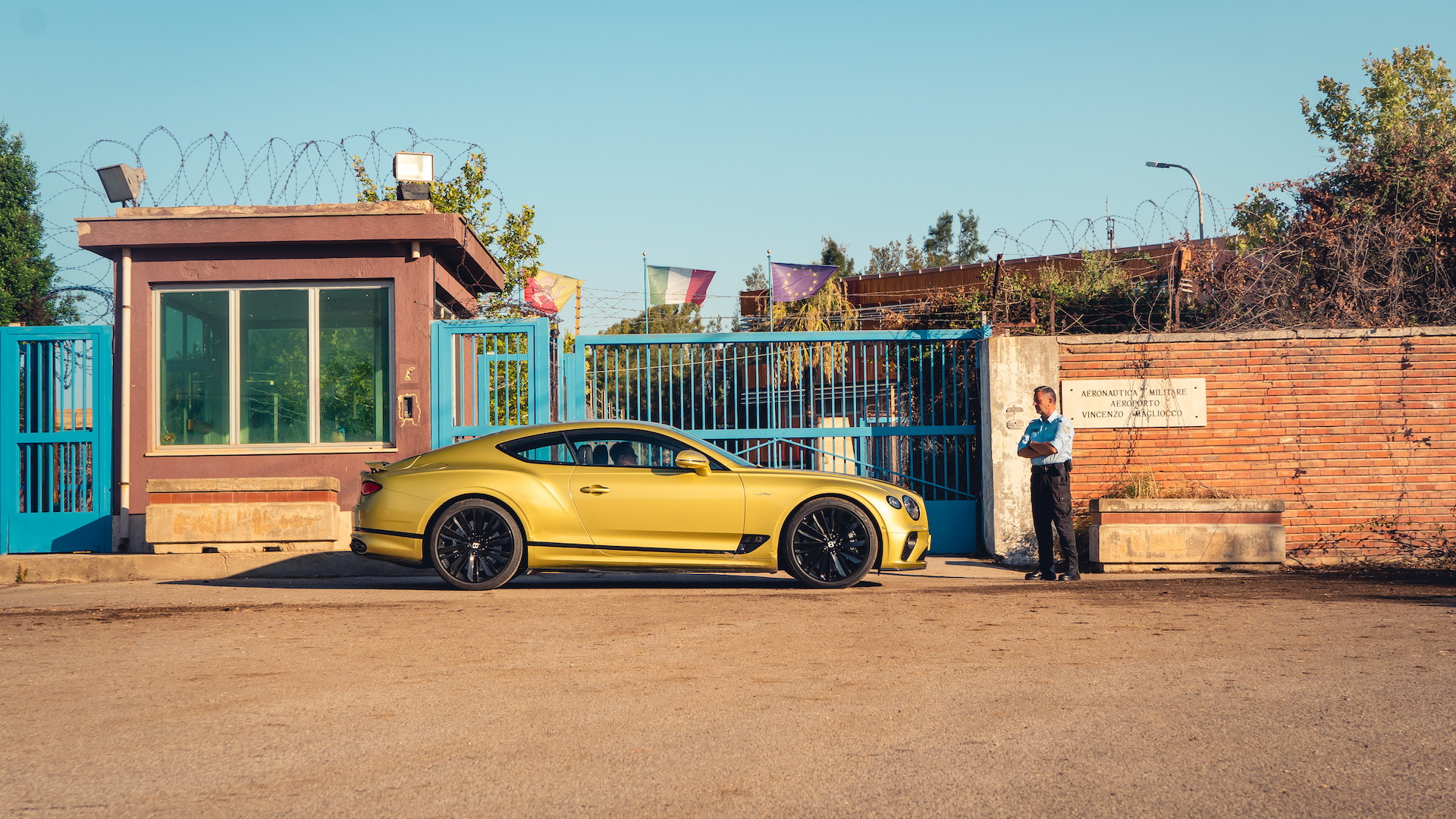 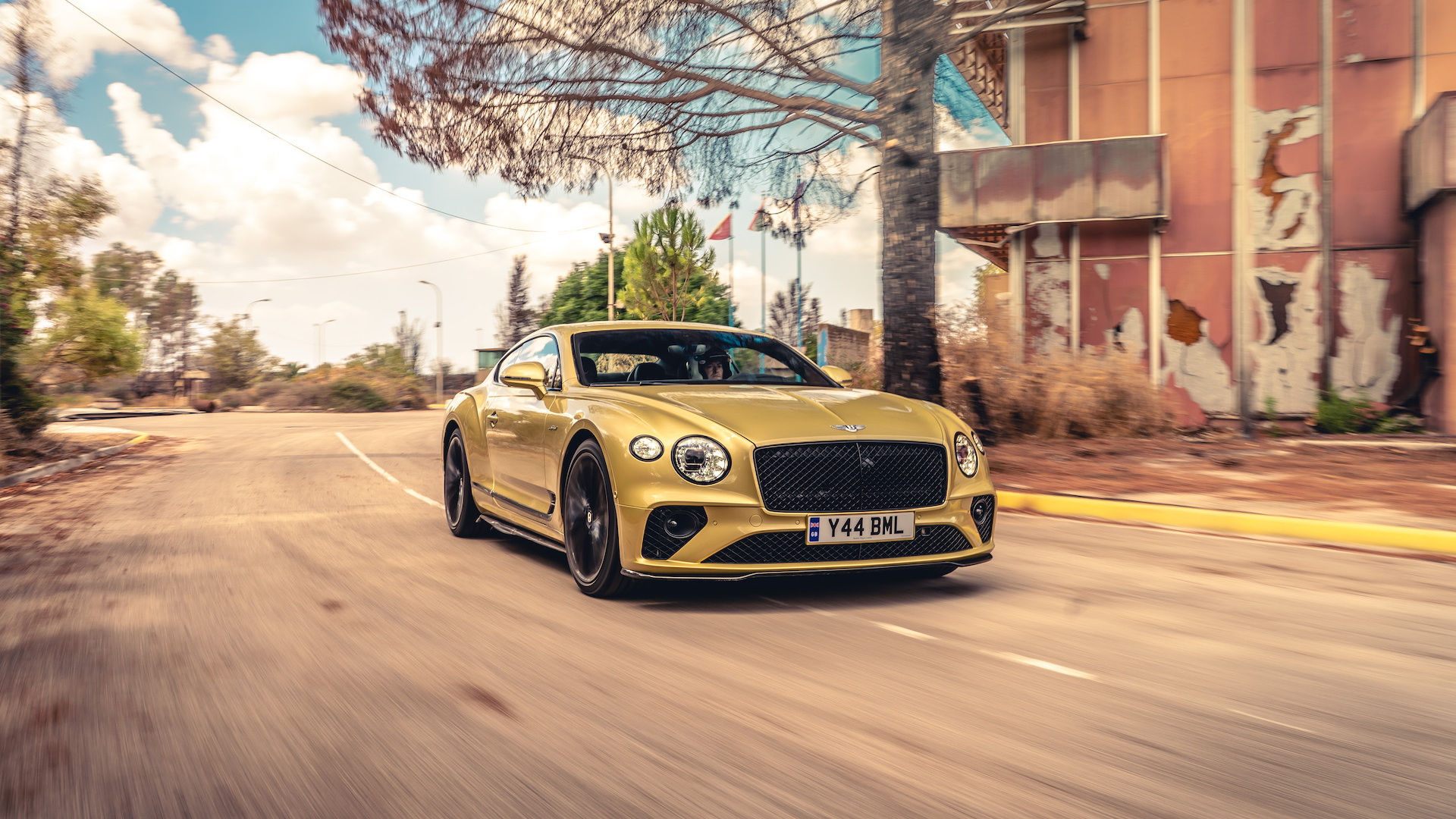 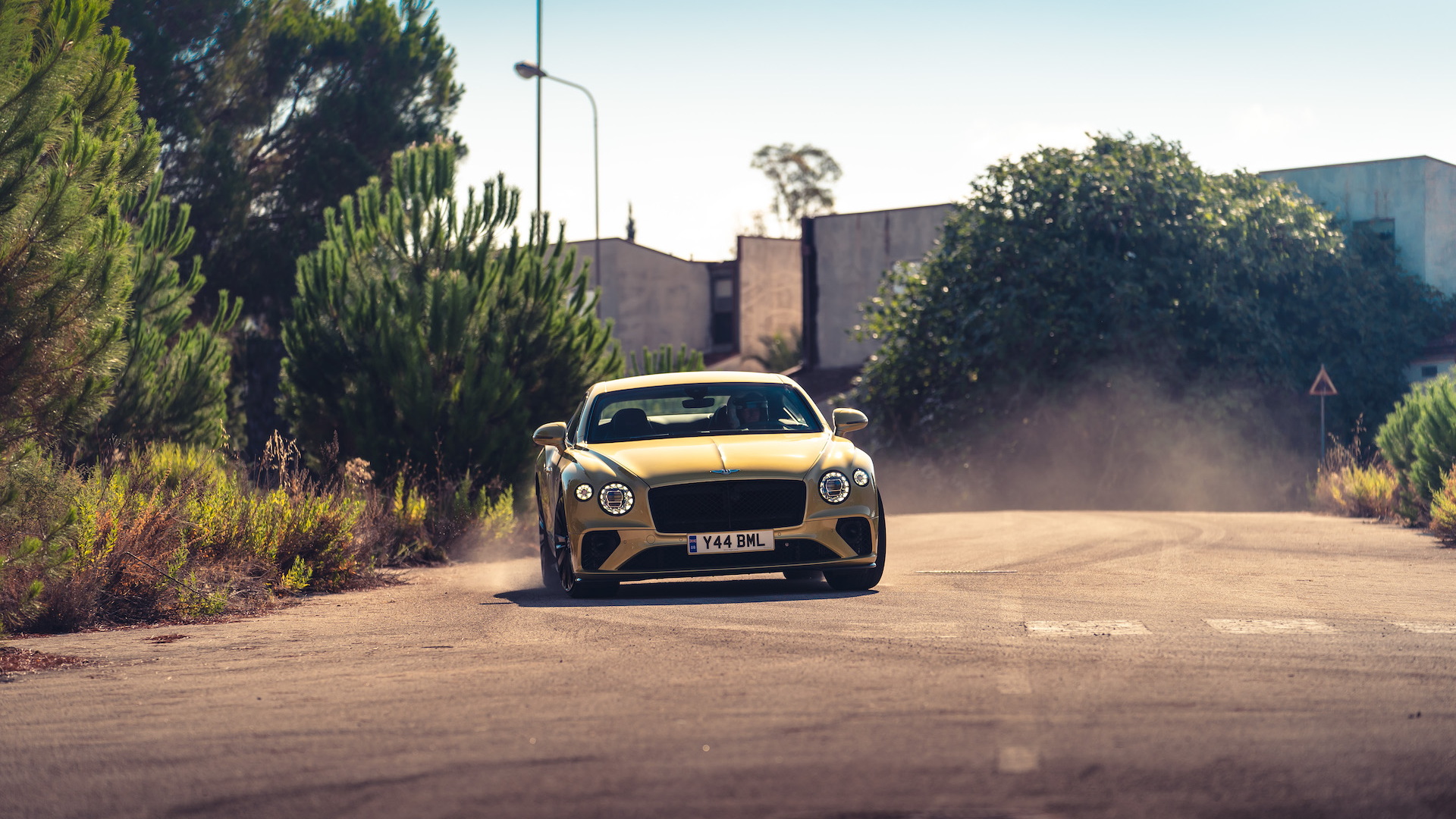 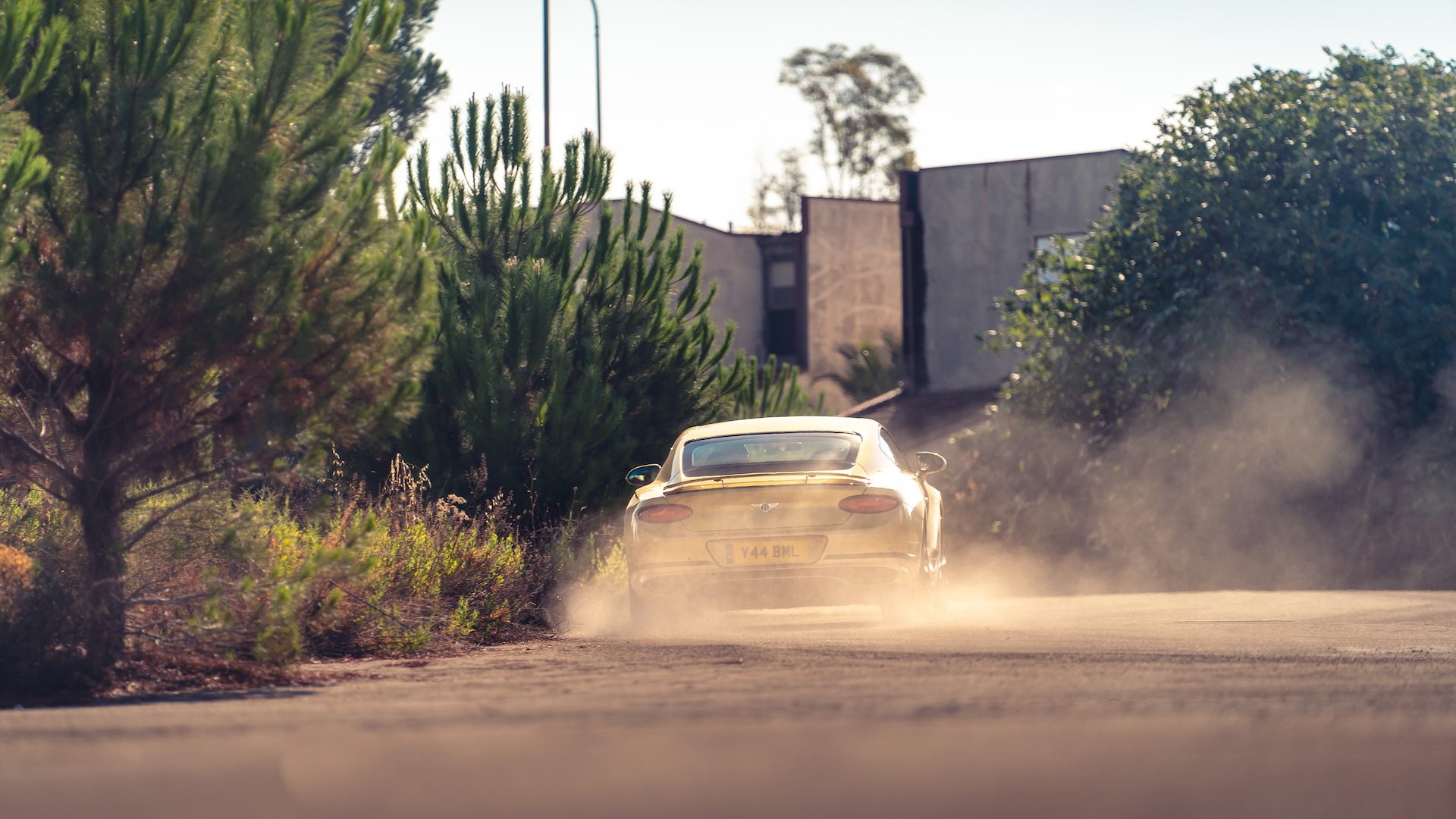 For once, I listen to the voices in my head. “The Sicilian sun has baked my brain.”

But, why am I thinking that now? It’s a fever dream, right? The phrase pulls itself out of a book read 30 years ago as I slither a 2022 Bentley Continental GT Speed through streets ringed by desolate homes and past a long-drained pool bleached by eons of sunshine instead of chlorine. Has the beating sun created this mirage—part “Robocop,” part Goodwood Revival—or is it real?

It’s real, as in decommissioned cruise-missile launch site real. Magliocco Aerodromo, built by Mussolini for the usual nefarious purposes, repurposed by the Luftwaffe, then seized in 1943 by the Allies and turned into a commercial airport in the 1950s. In the 1980s, NATO set up a cruise missile facility on the south side of what’s now the Comiso Air Base runway and housed 112 missiles there. It closed in 1911, but in the late 1990s some 5,000 Kosovar people took refuge in the dormant neighborhood still standing.

Now trees and vines have taken up light housekeeping as people have moved on. I needle the GT Speed past eerily quiet, everyday subdivision installations like a school and a post office. Oh, and the abandoned missile bunker. Every town has one, right?

It’s an apt tour of duty, since the 2022 Bentley Continental GT leaps from point to point like a frog with a rocket strapped to its ass. This car’s even painted in a sort of amphibian green-gold, dubbed Julep. It’s a vibrant hue that stands out in relief against the terra-cotta-toned terra firma. It’s a great color for flying.

At Comiso, and out in greater Sicily, among the Medusa heads of aloe and palm trees bursting in full fruit among thin-bladed palms, the Conti GT Speed stands out in sharp relief. It’s stunning in its current iteration and detailed exquisitely. The muscularity barely shows in photos: it evaporates the more formal proportions of the last-generation car, renders the fat off every curve, tapers every line to a perfect horizon line.

It slims and trims the looks of the stock Continental GT, even. Speed versions don an exclusive darkened grille and lower bumper grille, distinctive 22-inch wheels, and more deeply sculpted side sills. Chrome or black underliner draws out those sills and draws forward along the body of the car like an arrowhead. Like Range Rovers and BMWs with similar cues, it’s a bit of overkill that works exquisitely to some (me) and not to others (unwashed heathens, mostly).

Inside, the four-seat grand tourer takes on more sporty cues to distance itself from more plebeian Continentals—cars driven by people who have to fly commercial. The GT Speed wears two-tone leather and Alcantara upholstery in a choice of 15 colors, with diamond-in-diamond quilted leather upholstery, and Speed logos embroidered on the headrests. Piano black trim can be replaced by six other wood veneers, and dark aluminum trim can adorn the center console. If you can’t be pleased by its tightrope balance of glitz and substance, maybe you just won’t be pleased.

I spent the morning in a GT Speed coupe getting to Comiso with the singular task of hurtling between Fiat Pandas and dump trucks filled with dirt. Sicily’s morning commute sucks like the morning commute everywhere, but at least it’s baked under a cerulean sky. tBentley calls the GT Speed coupe its most dynamically capable car in its 101-year history, the car it believes is the best grand tourer on any road, anywhere in the world.

Point by point, the Speed argues that case, convincingly, starting with the familiar 6.0-liter twin-turbo W-12 that conjures up 650 hp and 664 lb-ft of torque. Mated to an 8-speed dual-clutch transmission and rear-biased all-wheel drive, the powertrain hustles the Conti GT Speed from 0-60 mph in 3.5 seconds in hardtop form, and takes one-tenth of a second more to do so with the convertible. Both sport a dream-sequence top speed of 208 mph; there’s no way with cluttered and busted Sicilian roads that we’ll see anything above 150 mph or so.

The combination of W-12 and 8-speed has depth and distinction up to about 5,000 rpm where horsepower starts to drop off and the torque curve bends more gently. The GT Speed’s quartet of drive modes—Comfort, “Bentley,” Sport, and Dynamic—give it the range of an EGOT winner. I chose Bentley mode for cruising, and Sport mode for threading along the thinnest lines on the map. In Sport mode, the transmission shifts twice as quickly e as it does in other W-12-powered Continentals.

Flip its paddles around and it generates an almost digital beat with exhaust overrun, like the kick drum on a “mastered for iTunes” copy of T-Rex. It’s a passing machine on the order of the quickest electric cars, time-warping the road ahead to enable six-car passes in the very short stretches where solid double lines go briefly broken: Whumpf! Another. Whumpf! And another. Whumpf-whumpf! Whumpf! Goodbye to you all.

At 190.9 inches long, with a 112.2-inch wheelbase, and a curb weight of 5,011 lb, the Conti GT Speed drives with a cross-country skier’s endurance, but it’s by no means lithe. Convertibles weigh 5,388 lb, and that’s before adding in all the bomboloni I’ve had.

It’s stable because this Continental GT wasn’t developed off of other architectures from its parent group, says spokesperson Mike Sayer. It’s rock-solid because it was developed alongside those other cars—including the Panamera—and thus Bentley had a say in key dimensions, like axle-to-dash and track.

Engineers from the British luxury brand threw every chassis and suspension system they could at the Conti GT Speed so the car could live up to that origin story. The GT Speed rides on a standard three-chamber air suspension with adaptive dampers, and also comes standard with all-wheel drive with an electronic limited-slip differential, rear-wheel steering, and 48-volt active anti-roll bars.

The AWD system is tuned with more rear-drive bias for a sportier driving experience. The rear-wheel steering makes the car quicker to turn at lower speeds and more stable at higher speeds. The limited-slip differential puts the power down more effectively when exiting turns, and the active anti-roll bars keep the barrel-chested two-door more level in corners.

The proof of that theory comes after a wake-up espresso in one of Comiso’s disused warehouses. (Caterers, we walk in your grace.) Slewing through decrepit neighborhoods at 11/10ths, I worry a tricycle will push out into the street like some edge-case “self-driving” test, or worse, that some sewer-grade clown will spring out. Also I wonder why Bentley didn’t include a baseball bat for gratuitous swings at all these dead-letter mailboxes. For some of us, high school never ended.

The sum of the GT Speed’s active rear differential and active suspension is this: dialing a wide car into a skinny corner and powering out doesn’t feel rude or expensively mistaken, even when the stability control system has been turned off completely to allow more wheel slip and yaw angle, and to get the most feel out of the car's advanced chassis systems. The weight shifts, the traction moves, the proper rear wheel takes a set, and the car pivots into place for the next apex—in front of old man Esposito’s place, if memory serves.

Credit’s due also to the GT Speed’s powerful carbon-ceramic brake rotors with their 10-piston front and 4-piston rear calipers. They save 73 pounds of unsprung weight, and in at least one instance, put the car’s Pirelli 275/35ZR front and 315/30ZR rear tires to near-maximum use, saving the car from wandering trash cans on the road back to the hotel.

The 2022 Conti GT Speed has more power and sharper handling, but Bentley says comfort doesn't suffer. It’s hard to tell, while my back’s being massaged and cooled by its fabulous driver seat and while my ears are being soothed by 2,200 watts of 18-speaker Naim audio sound with active bass that vibrates the seat bottom to the beat of Italian disco.

I skirt looming downpours in a top-down Breeze-tinted convertible with a navy suede cabin. The roof takes just 19 seconds to deploy or stow; it’s lined with enough soundproofing to render said Italian disco listenable. I give a pass to the neck warmer integrated into the heated and cooled seat; I have the sun at my back.

The top, by the way, can be ordered in one of seven colors, including a tweed option. Tweed? In a car that can do this? Weird British flex, but OK, I guess. This is definitely a car for people who wear two watches and think virtue signaling is what a rally co-driver does to earn his keep. It’s ungodly comfortable and that’s all that matters.

Safety’s not given a slip. The GT Speed has automatic emergency braking, adaptive cruise control, a surround-view camera system, and traffic-sign recognition that I felt empowered to ignore. It’s a loosely guarded secret here that the posted limits are half what you should be driving.

Is there anything this car doesn’t do well? The answer is no, unless you’re talking about weighing less or costing less. A few hours of driving and both of us, the car and I, are hungry for more. Bomboloni, yes, but driving, too.

If you’re willing to let the Sicilian sun simmer your skull, few skillets can do it like the 2022 Bentley Continental GT Speed. Flip the lid, and hear nothing but echoes of the Conti GT’s whuffling W-12, and the occasional slip of grip and skip of tires. Whether you’re cruising a ghostly missile base or just the ghosts of other pasts, the GT Speed’s fast and quick enough to pass through a portal in time. It passes every test in flying color.

Bentley flew me to Sicily and steered me around unheard-of rains so that Motor Authority could bring you this first drive review.