The Bugatti Bolide was conceived as a no-holds-barred expression of performance. This Bugatti-produced video, featuring CEO Stephan Winkelmann, head test driver Andy Wallace, and other important figures from the automaker, highlights some of the car's standout design features. Get ready to have your mind blown.

Bugatti emphasized weight reduction to an extent not seen in its other recent cars, making greater use of lightweight materials. For example, the prop shaft that brings power from the transmission to the rear axle is made from carbon fiber with titanium fittings, while the front-suspension pushrods are 3D-printed titanium, Bugatti R&D boss Stefan Ellrott explained. The result is a 2,733-pound curb weight.

Aerodynamic elements received similar attention to detail. The Bolide's roof air scoop is made from a flexible material that deforms at high speeds, creating dimples that reduce aerodynamic drag. It's a trick inspired by the humble golf ball. The front and rear wings deliver 1,764 pounds and 3,968 pounds of downforce, respectively, at 200 mph, according to Bugatti. 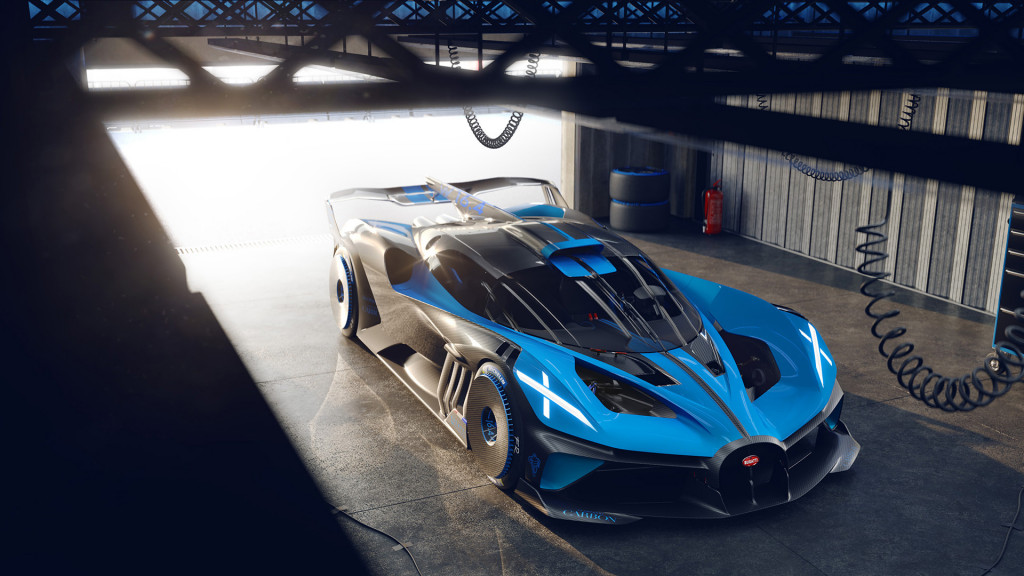 The Bolide is a deconstructed Chiron with a bespoke monocoque chassis with an integrated roll cage. Achim Anscheidt, Bugatti director of design, said the original idea was to design a car that was as stripped down as possible, with an exterior "shrink wrapped" around the driver and mechanical components. At the same time, the exterior design was heavily influenced by aerodynamics, incorporating various channels and scoops to direct airflow for both downforce and cooling.

The Bolide uses the 8.0-liter quad-turbocharged W-16 engine, 7-speed dual-clutch transmission, and all-wheel drive system from the Chiron and its associated variants. In the Bolide, the W-16 is tuned to produce 1,824 horsepower and 1,365 pound-feet of torque on 110-octane racing fuel.

The numbers are otherworldly and so is the work that Bugatti put into the Bolide. Click on the video above for more brain-melting details.