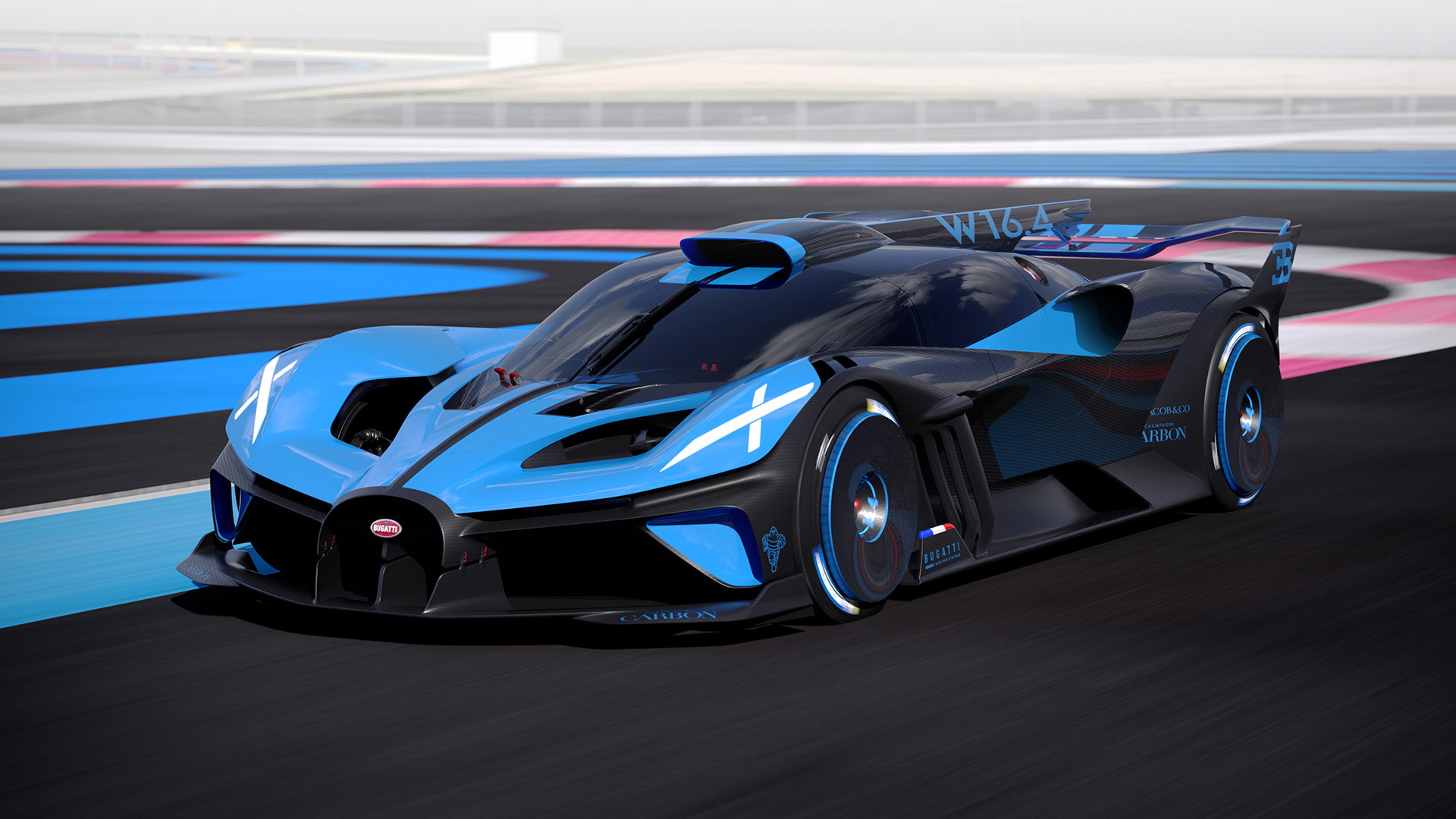 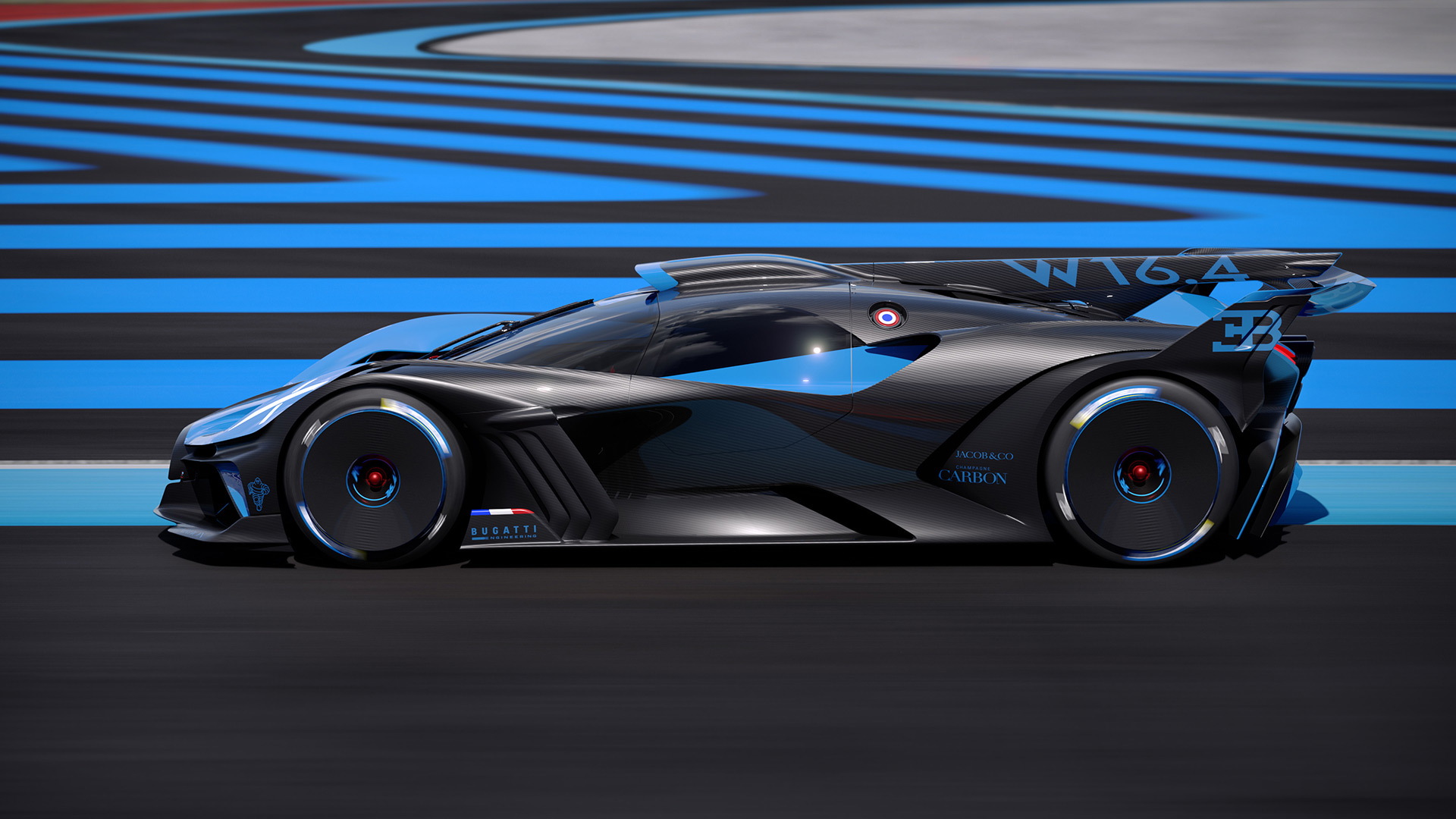 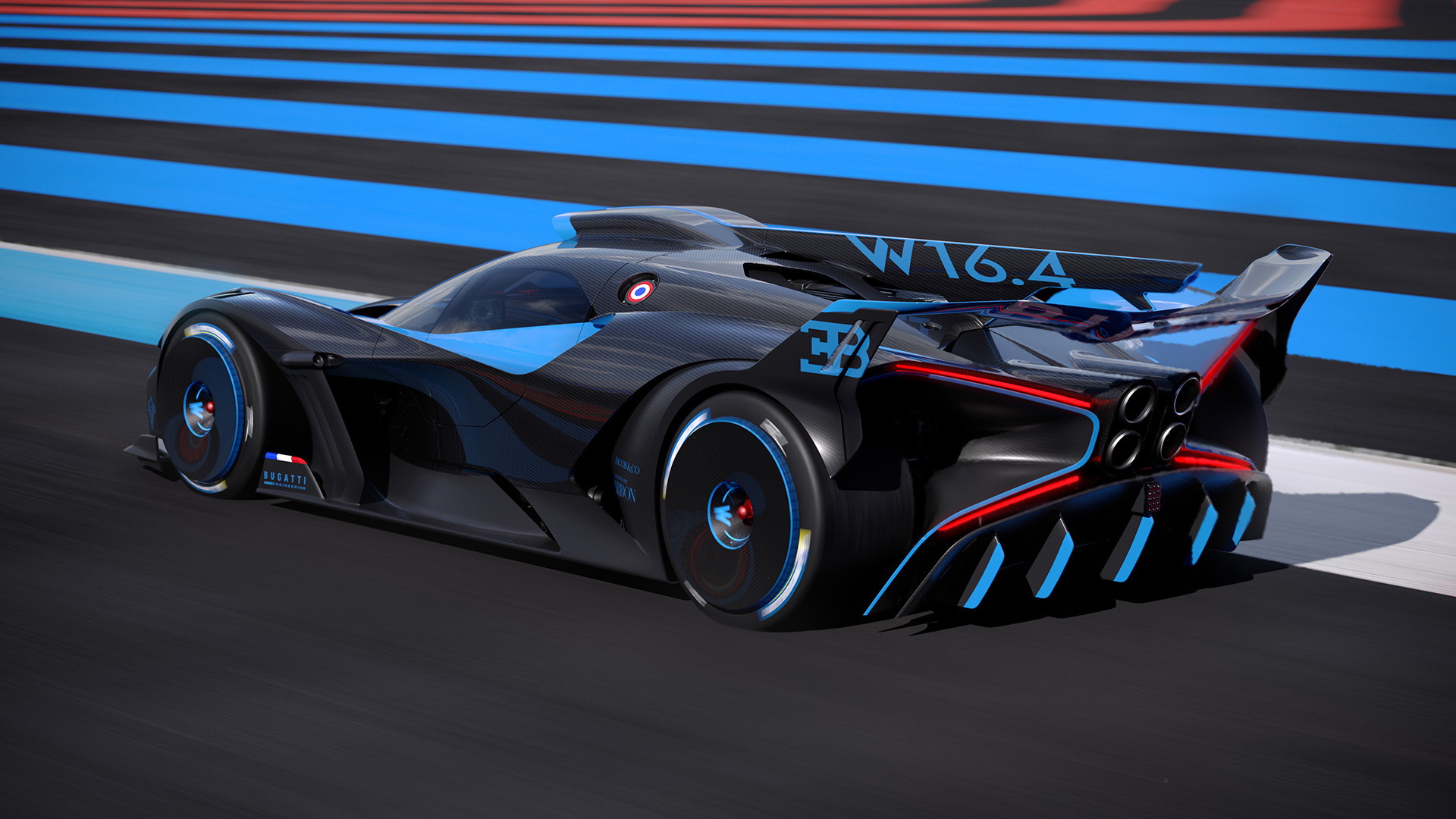 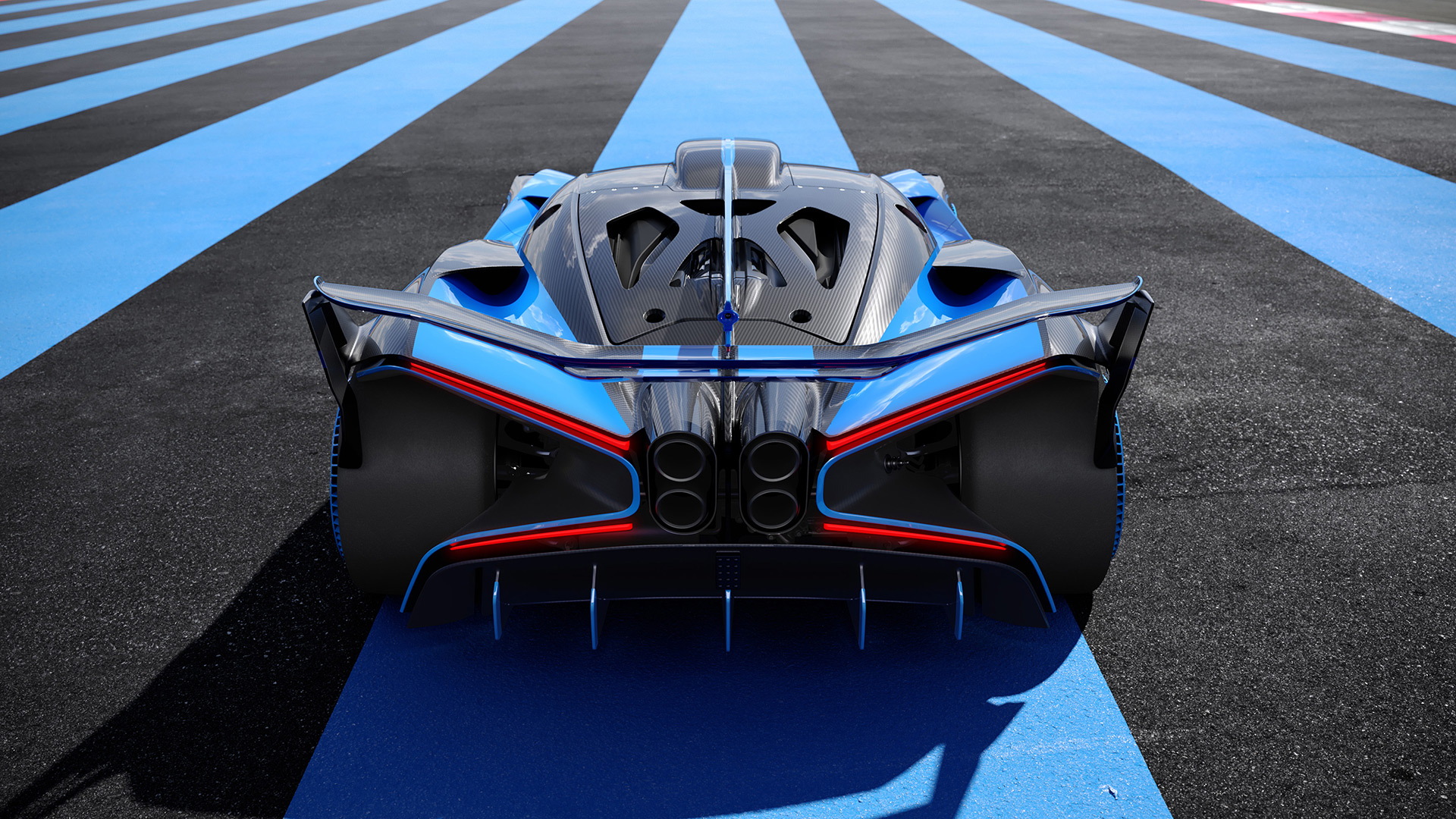 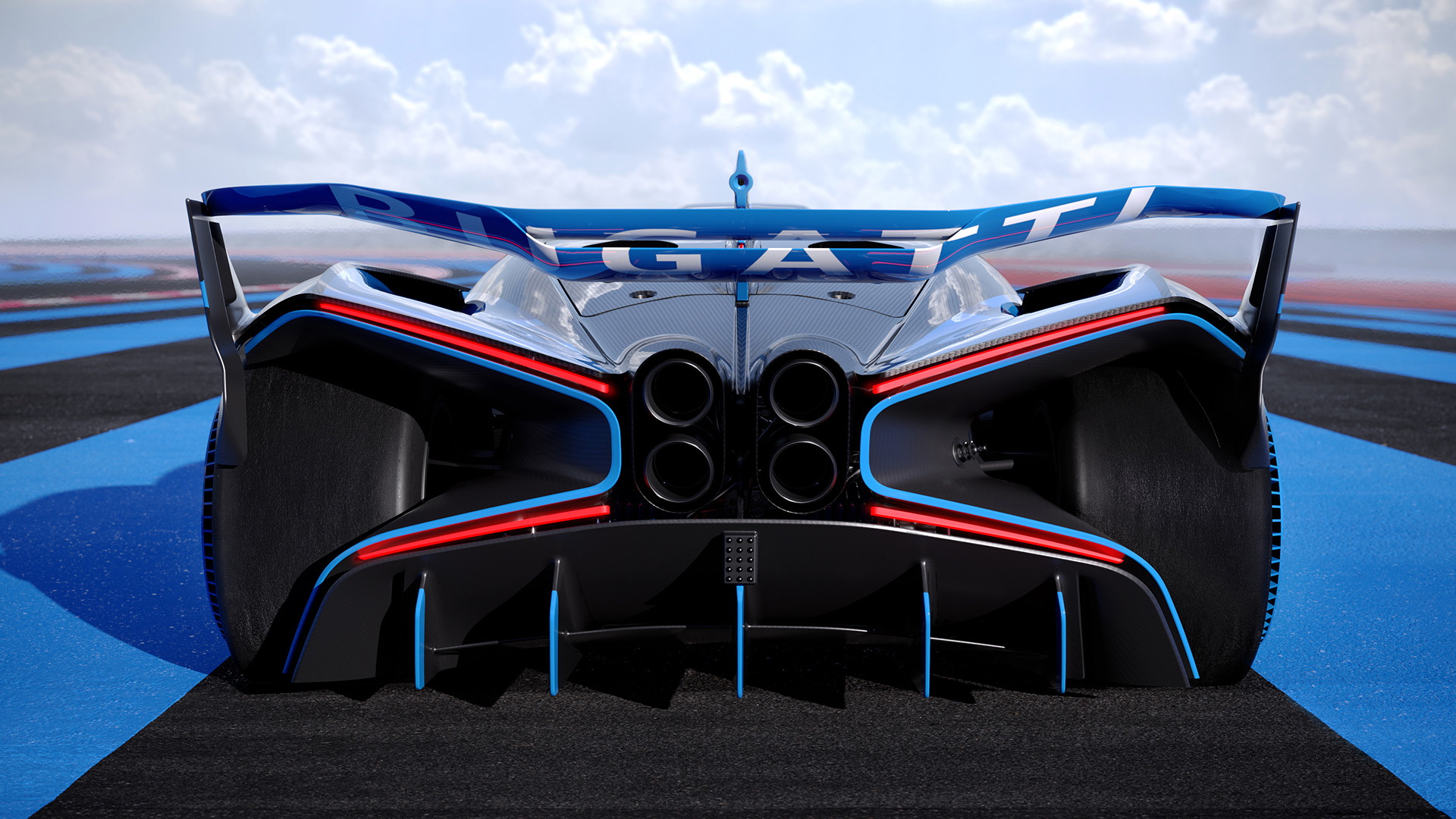 Bugatti in recent weeks has been hinting at a model with radical styling and on Wednesday the car was revealed as the new Bolide.

The Bolide is the result of a challenge put forward by Bugatti chief Stephan Winkelmann to his team to imagine a Bugatti developed without any restraints. The resulting car is a track car, and strictly a one-off, at least for now.

It isn't based on any existing Bugatti, although it shares its 8.0-liter quad-turbocharged W-16 engine and an all-wheel-drive system with the Chiron and its various coach-built versions. Here, the engine delivers 1,577 horsepower with 98-octane fuel. However, it can also run on 110-octane racing fuel which sees its output bumped to 1,824 hp. Peak torque in this case would be 1,365 pound-feet.

The engine revs higher than in the Chiron, a change that necessitated a number of tweaks. Among these was an upgrade of the 7-speed dual-clutch transmission, along with changes to the intake and exhaust systems for better throttle response. New turbochargers designed to deliver more power at the top end were also installed, and both the lubrication and cooling systems were also upgraded to handle the extra grunt. Bugatti says the two main radiators at the front of the vehicle are more effective in terms of flow than even the designs used in Formula One.

One of the most impressive innovations is a morphable panel forming the intake scoop on the roof. It adjusts depending on the speed of the vehicle to optimize air flow. At lower speeds, the surface of the scoop remains smooth. In contrast, a field of bubbles bulges out when driven at fast speeds. This reduces the aerodynamic drag of the scoop by 10% and ensures a 17% reduction in lift forces. Also aiding downforce are the front and rear wings which deliver 1,764 and 3,968 pounds of downforce, respectively, at a speed of 200 mph.

Stopping power comes from F1-spec carbon-ceramic brakes that reside within some of the biggest wheels fitted to a car. This is for the massive tires which measure 340 millimeters in width at the front axle and 400 mm at the rear. A compressed-air-driven jack system with four rams makes tire changing easier, while a quick refuelling system also helps thanks to pressure refuelling.

The Bolide's engine sits in a bespoke carbon-fiber monocoque structure that's made from carbon fiber with the same specifications used in the aerospace industry. The type of steel used in the vehicle, for example for the rear frame, is also aerospace-grade stuff. This allowed Bugatti to use metal with a thickness of a single millimeter, helping to keep weight down. 3D-printed parts, like titanium components for the push-rod suspension system, also helped to reduce weight. The weight of the car is just 2,733 pounds.

Based on Bugatti's estimates, the Bolide could drive well past 310 mph (perhaps even past the SSC Tuatara's 316.11 mph record?), while also being able to lap Le Mans' Circuit de la Sarthe in 3:07.1, or about 10 seconds faster than the current race record set by a Toyota TS050 Hybrid during the 2019 24 Hours of Le Mans. Bugatti also claims the Bolide would lap the Nürburgring in a time of 5:23.1, which comes close to the 5:19.55 lap record set by the Porsche 919 Evo time-attack special in 2018.

The Bolide could be mistaken for a Le Mans Prototype racer. Just take a look at the huge intake on the roof and the stabilizing fin behind it. Could an entry in the World Endurance Championship's new Le Mans Hypercar class be in the works? Bugatti competed—and won—at Le Mans in its early years, though the company hasn't said anything about competing in the modern era.

Interestingly, a September report from CAR claimed Bugatti was about to be transferred from current owner Volkswagen Group to EV technology company Rimac, a process that would also see current Bugatti chief Stephan Winkelmann leave the company. Per the report, Winkelmann would unveil a wild track car prior to leaving the company. Could the reveal of the Bolide mean rumors of the Rimac takeover are true? We should know soon as the future of Bugatti at VW Group is expected to be discussed at a November meeting.