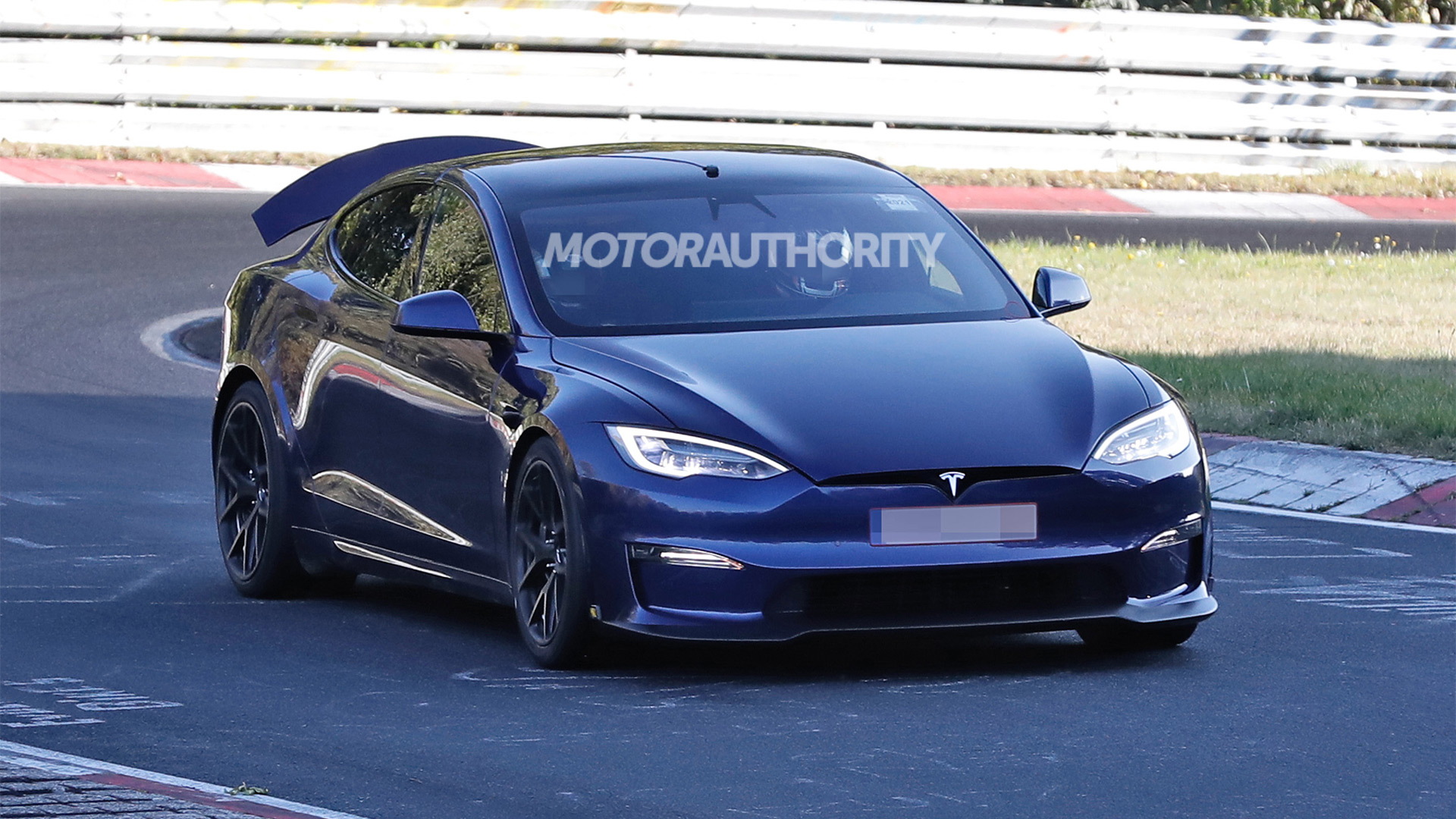 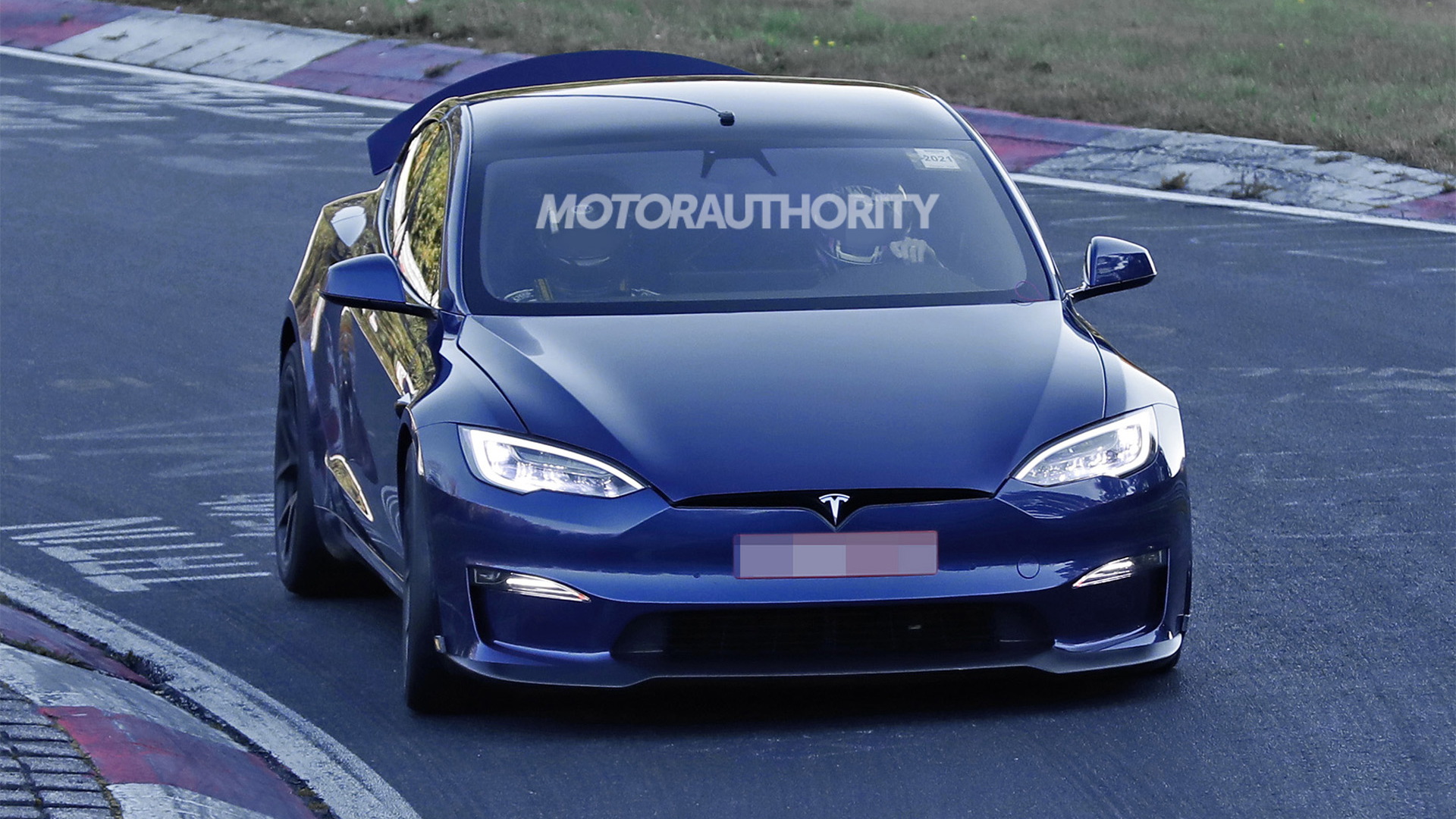 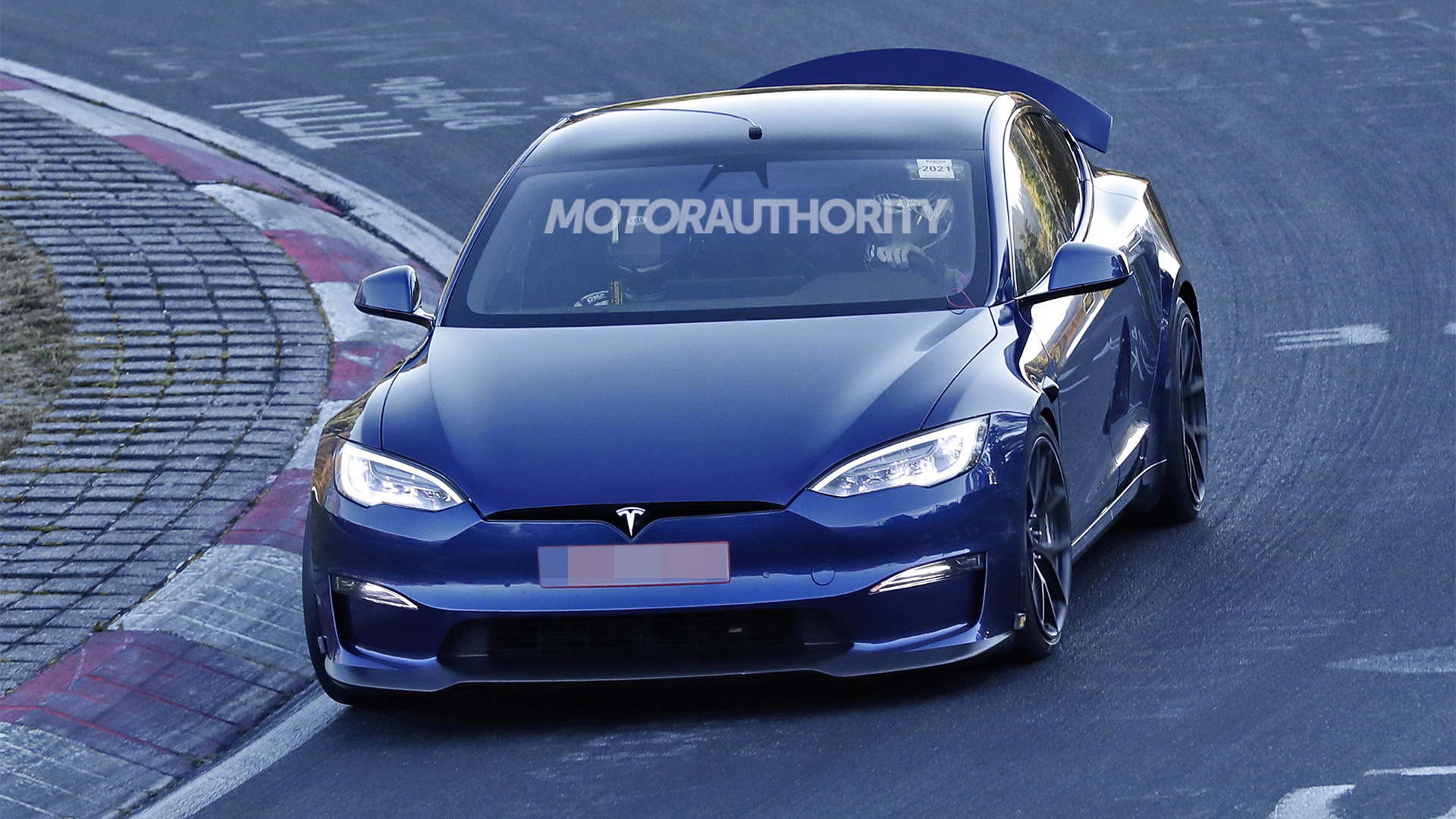 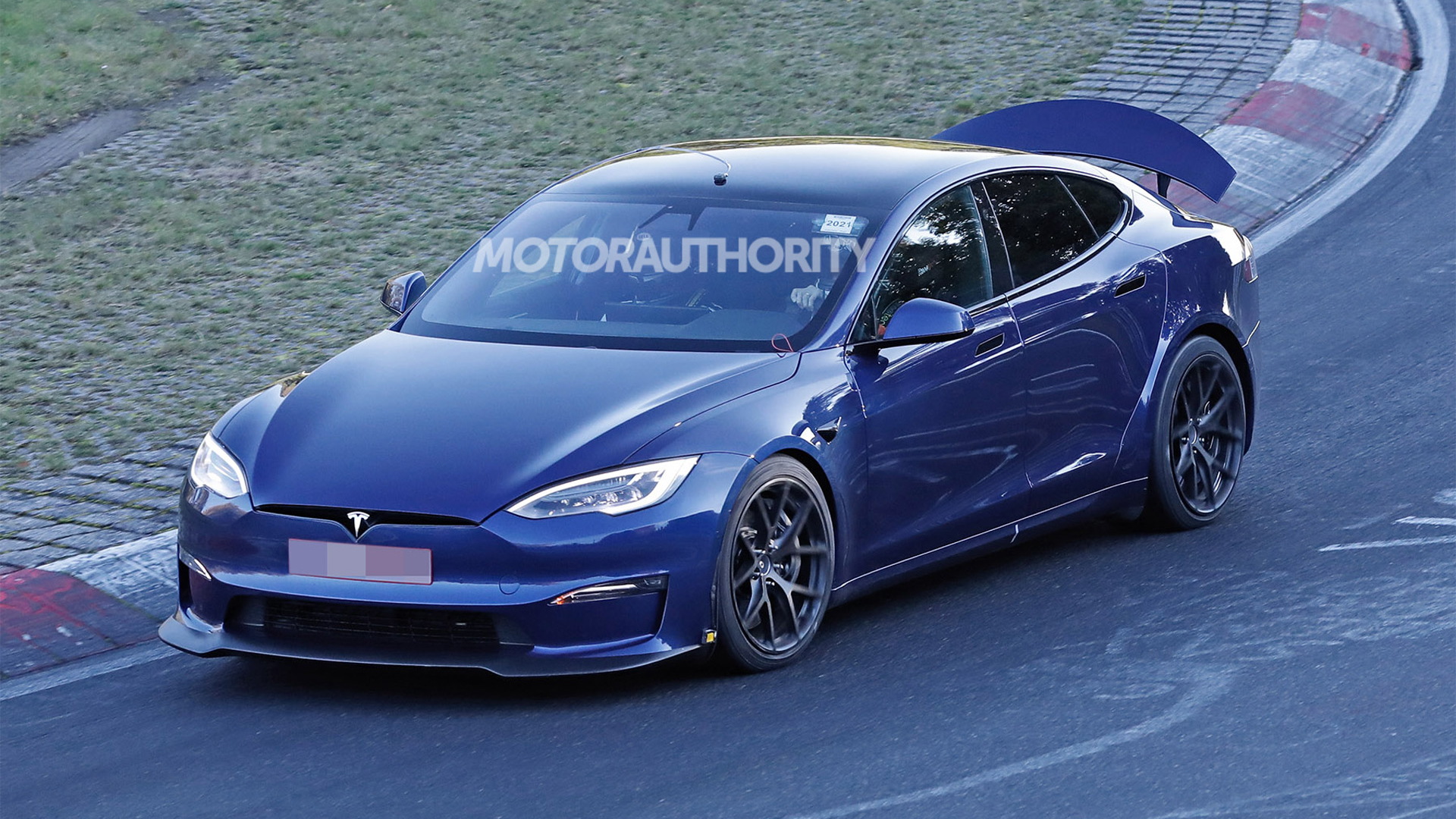 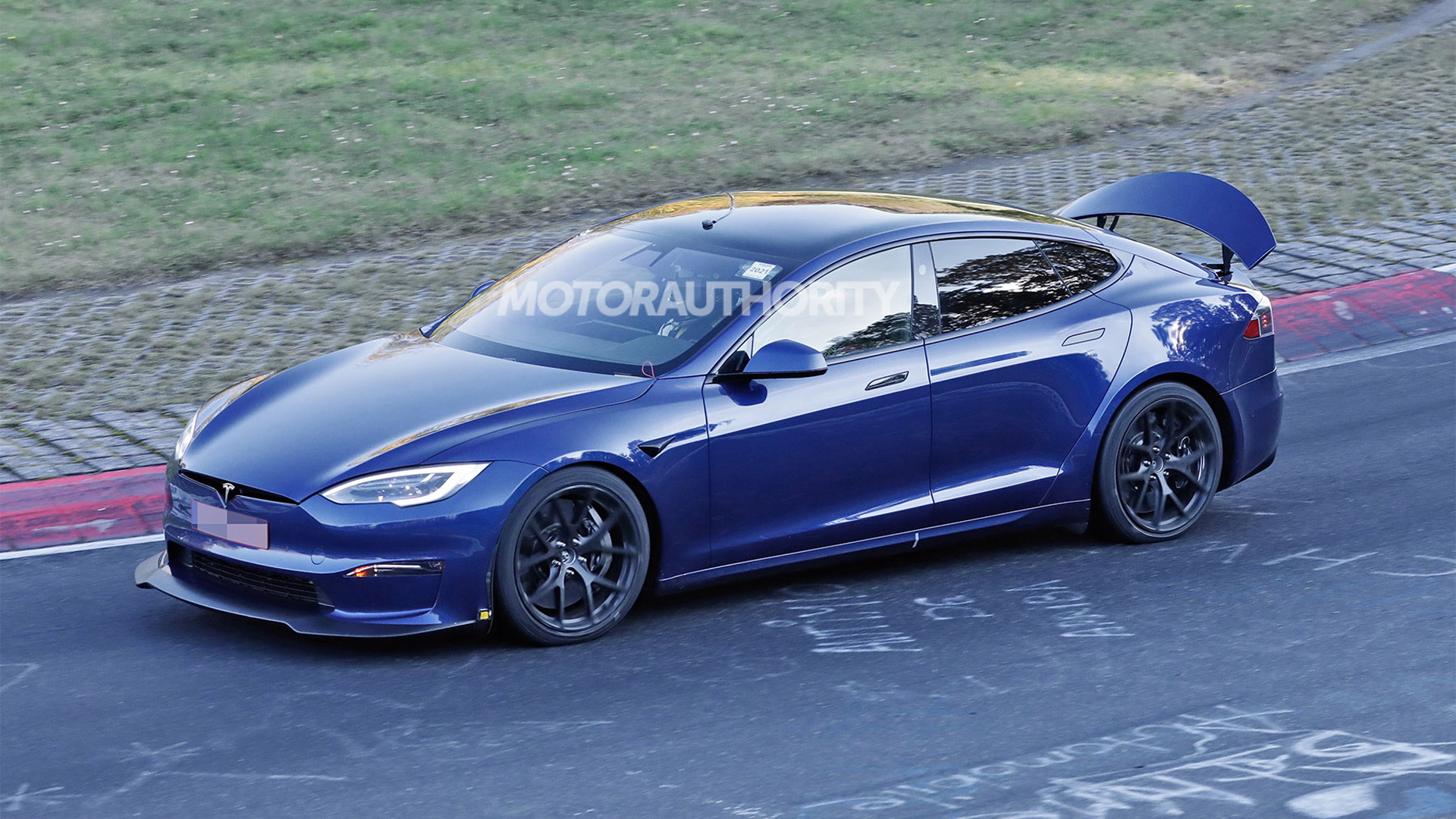 The 2021 Tesla Model S Plaid is already the fastest electric vehicle in production right now, with Tesla in September verifying the car's performance by setting a lap time of 7:35.579 for the full 12.9 miles of the Nürburgring—a new record for production EVs.

Now it looks like the company is readying some upgrades to make its electric hatchback go even faster.

Our latest spy shots show a Model S Plaid fitted with an extended front lip spoiler, as well as an integrated rear spoiler that has an active component. The rear spoiler is normally concealed in the trunk lid but the driver has the ability to extend it (likely by selecting a Track mode), and during hard braking the spoiler tilts forward to serve as an air brake.

According to our photographer, the latest prototype on each run would make two laps of the Nürburgring before returning to the garage, whereas during previous tests for the Model S Plaid only a single lap would be made on each run.

Our photographer also noted that the prototype was fitted with different tires for testing on the road compared to the tires used on the racetrack.

Prior to the launch of the Model S Plaid, Tesla estimated that a lap in 7:20 would be achievable and that a lap in just 7:05 was conceivable. Perhaps the company is now developing upgrades to get closer to those targets. Note, this isn't like a prototype for the previously announced Model S Plaid+ as plans for that car were canceled in June, with Tesla calling the regular Plaid fast enough.

Tesla started deliveries of the Model S Plaid in June. The car packs a three-motor powertrain good for 1,020 hp, or enough for 0-60 mph acceleration in 1.99 seconds and a quarter-mile time of 9.23 seconds. The top speed is a claimed 200 mph.

If you'd like to feel that performance yourself everyday, the Model S Plaid is currently available for $131,190. A Model X Plaid with the same powertrain but slightly tamer performance figures is also available, priced from $121,190. Both figures include destination.