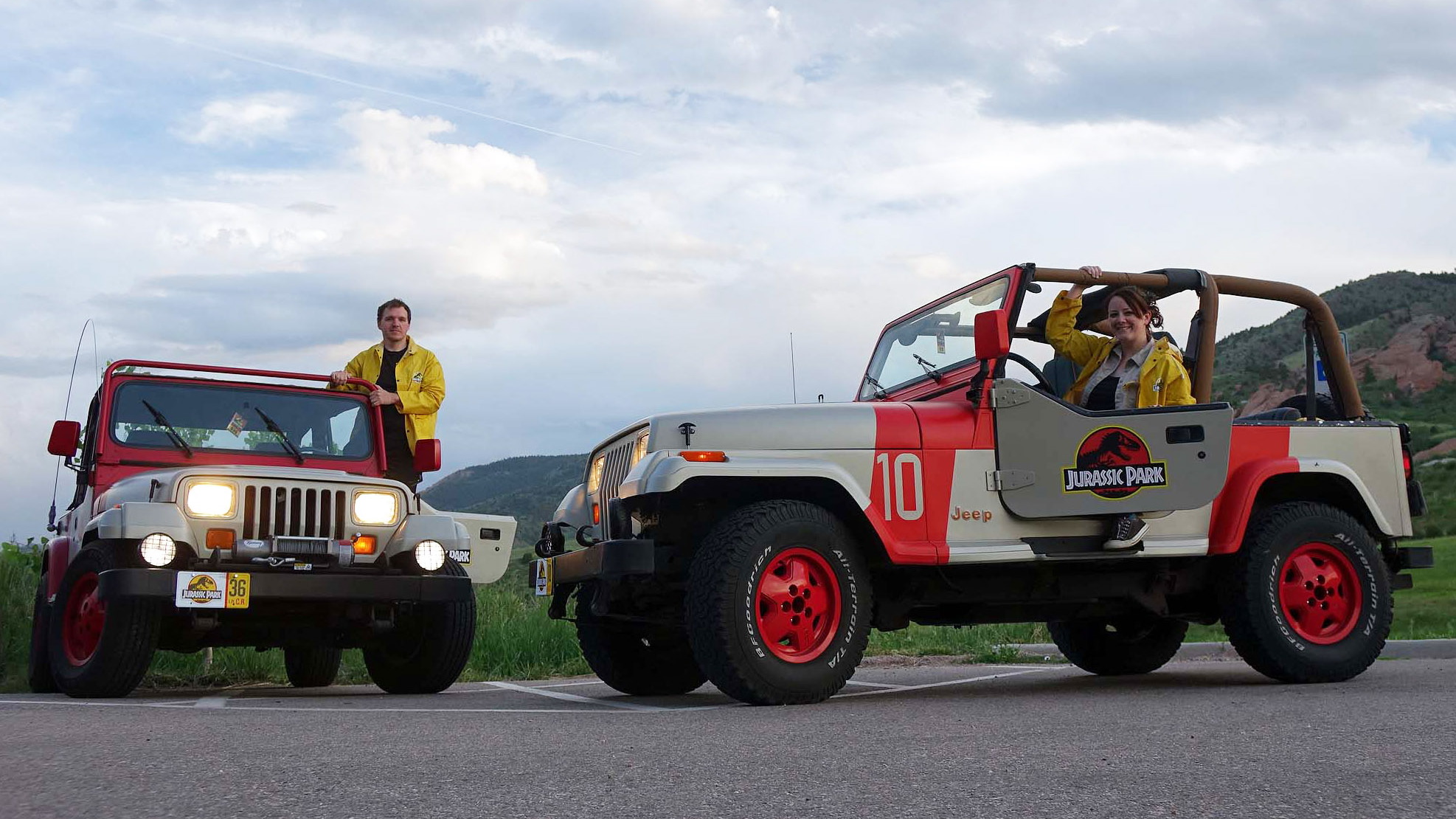 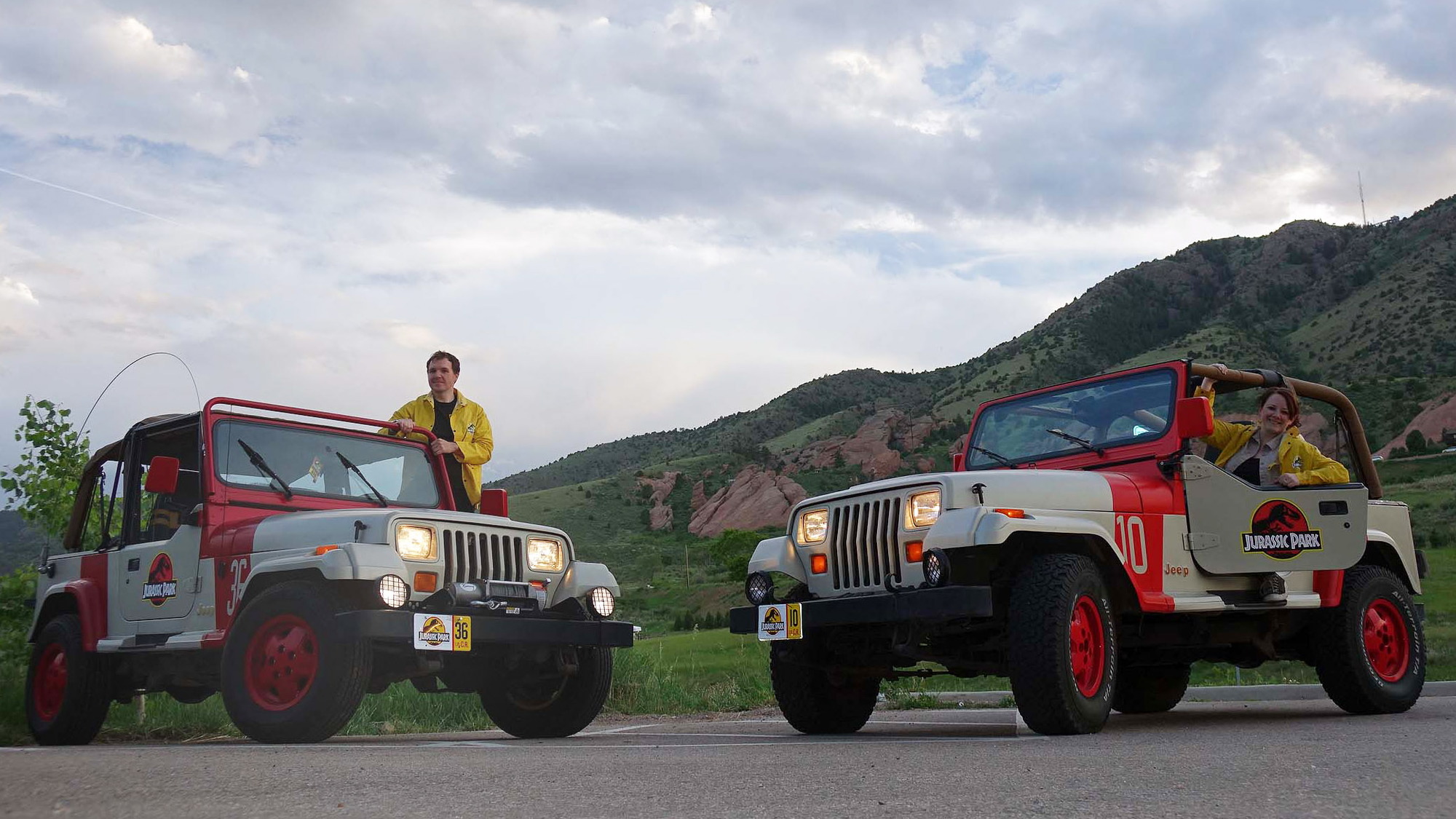 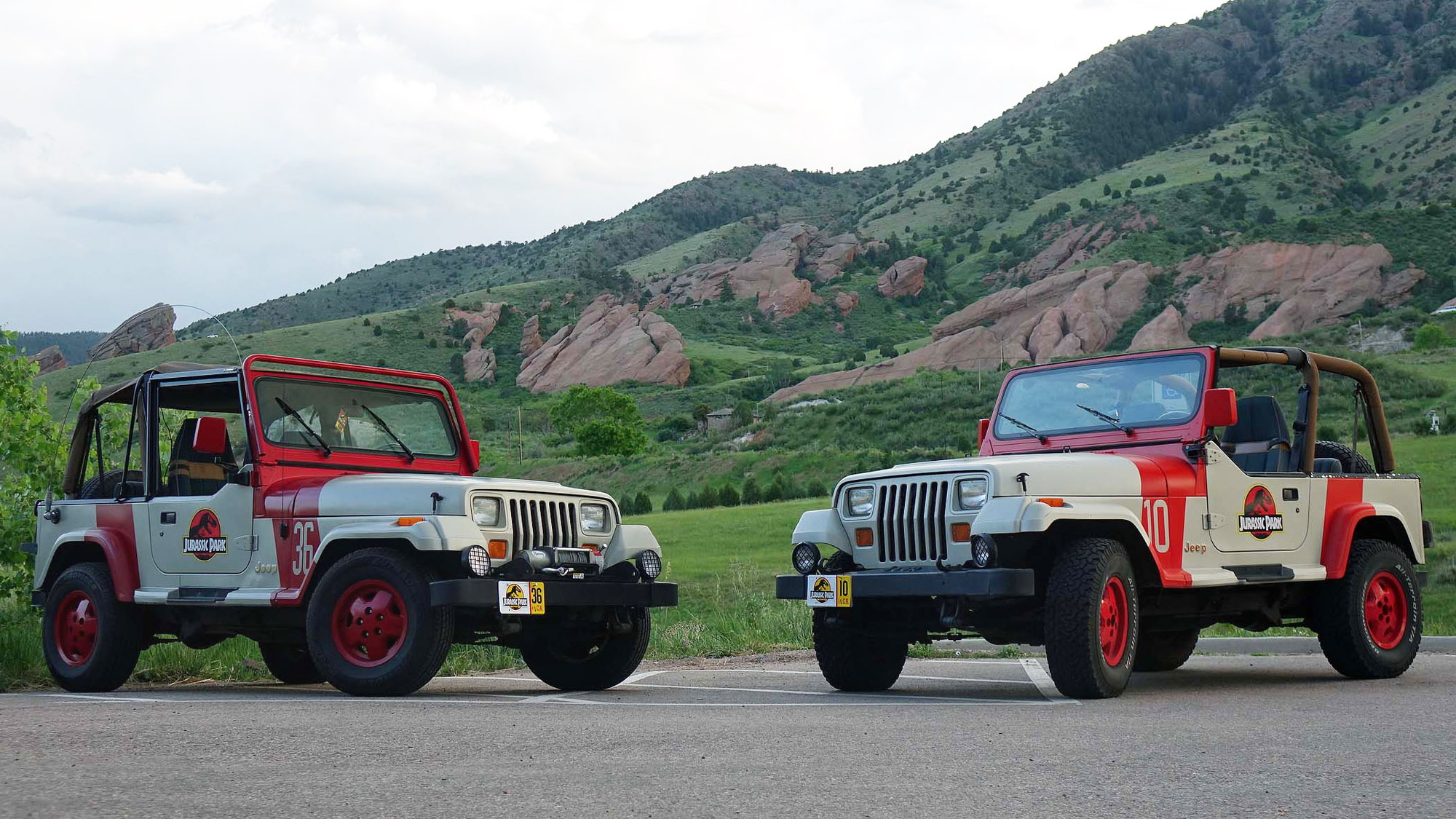 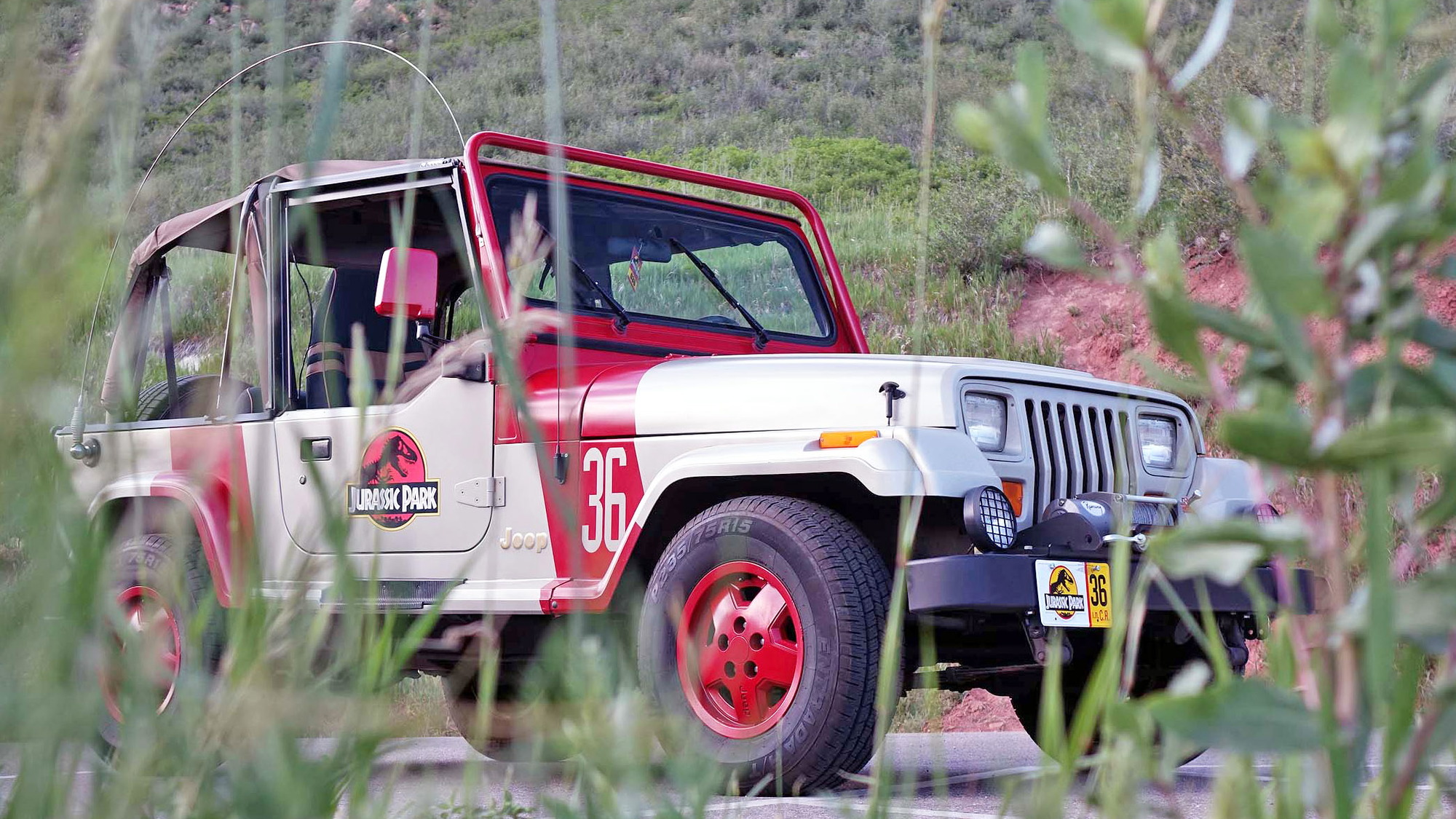 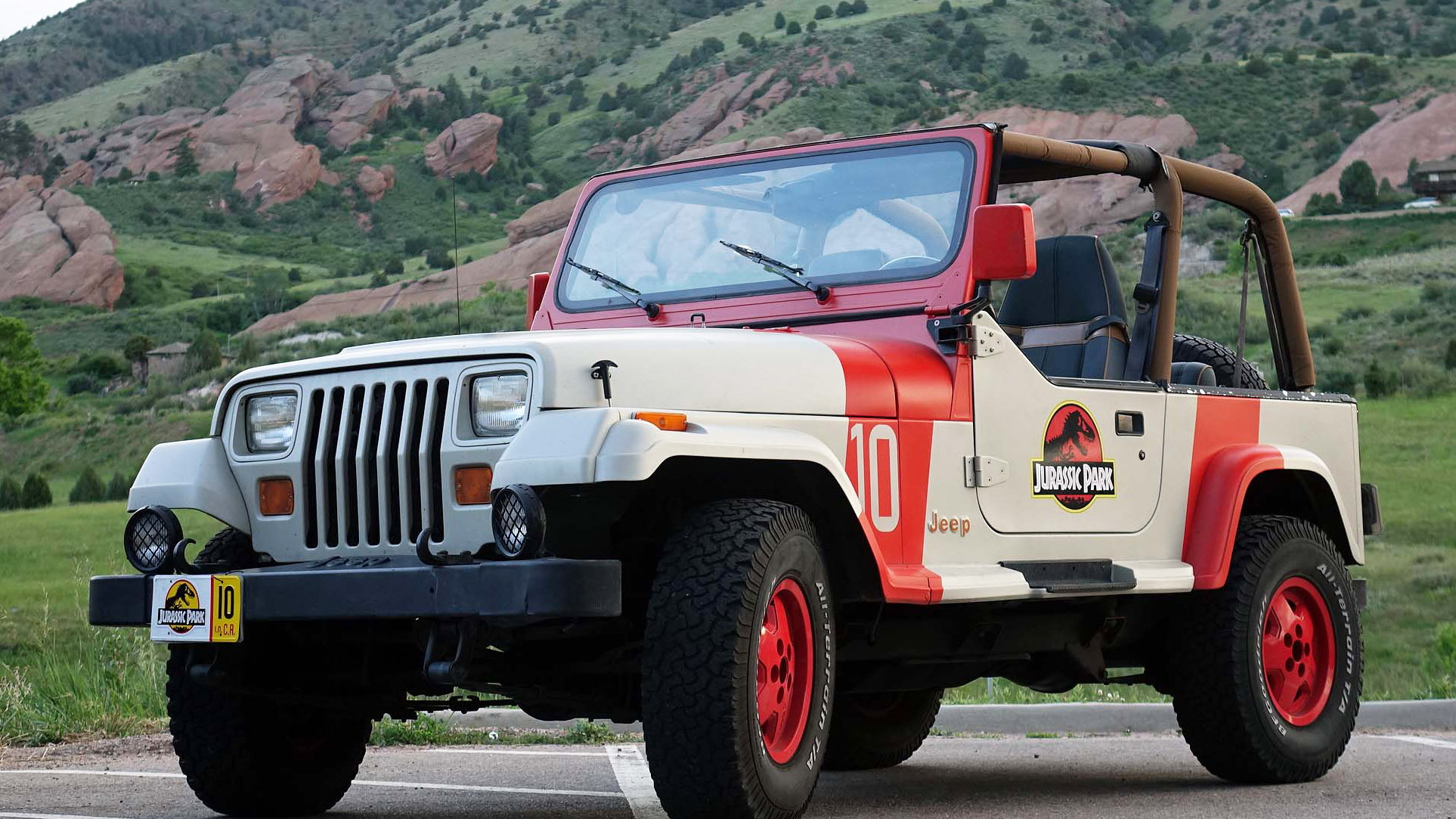 Karen Lechtenberg could be the poster child for what NPR termed the “Jurassic Park” generation. After watching dinosaurs bound across the big screen with a gaggle of beige and red Jeep Wranglers in tow, at five years old, she  was hooked.

“They drove across the screen and I said, ‘I want one of those,’” Lechtenberg tells Motor Authority at the base of Dinosaur Ridge, a location in the foothills of the Rocky Mountains west of Denver named for numerous Jurassic-era fossils found nearby.

For Lechtenberg, the location—and the Jeep Wrangler she built as a re-creation of the film cars—is more than just a passing interest.

“I actually dig up dinosaurs during the summer now. I’d say ‘Jurassic Park’ played a part,” she laughs. Lechtenberg works as a geologist.

She’s joined by Rob Penna, a fellow member of the local chapter of the Jurassic Park Motor Pool, a group of movie buffs deeply passionate about Steven Spielberg’s 1993 blockbuster.

Penna works in IT. Instead of chasing fossils, he is working on a series of dinosaur sound effects controlled via a tablet computer that he’ll mount to the dashboard of his tribute Wrangler.

He taps on the screen and Hollywood-grade screeches emanate from a speaker mounted near the rear seat of his Wrangler.

For Lecthenberg and Penna, their “Jurassic Park” Jeeps are the culmination of decades of preparation. Scale model versions of the “Jurassic Park” Wranglers were made to promote the film in 1993, and Matchbox even issued a more detailed lineup last summer to promote “Jurassic World: Fallen Kingdom,” the latest installment in the series. Collecting ephemera wasn’t enough, however.

Lechtenberg bought license plates modeled after those used in the movie and hung them on a wall until, in 2014, she found her Jeep. The 1992 Wrangler was in Alabama, a long way from her home near Denver, so she enlisted her brother in Tennessee to hold it until she could drive it home. Back then, it was just a beige Wrangler Sahara with chipped paint and a lot of miles on the odometer.

After looking at around 20 Wranglers, Penna got lucky and found one locally in good shape a few years ago. Initially, the two “Jurassic Park” fans had tired Wranglers in need of resuscitation, but the seed that had been planted in 1993—or maybe 56 million years ago—was beginning to sprout.

“Yours was a ‘92 in Sand Beige? Oh, cool!” Penna says, noting that his was green until he had it repainted in beige with red trim.

His Jeep didn’t start life as a Sahara with that trim’s green seats and specific door panels, but his father runs an upholstery shop and his Christmas gift one year was a new interior that’s nearly a time warp to 1992, minus an REM cassette tape.

Lechtenberg found a local body shop willing to follow her specific instructions for getting the red stripes and stenciled numbers correct, and since then the shop has done a handful of local “Jurassic Park” Wranglers including Penna’s, and even a few other replicas that are part of the Colorado Movie Cars group.

When it comes to building a replica movie car, details matter. The four Jeeps in “Jurassic Park” look the same at first glance. Through the power of the pause button, “Jurassic Park” fans have tracked down subtle differences, and they’ve painstakingly figured out what’s needed to create a replica.

The instructions read more like those found with a 1/25-scale plastic model kit than a typical car restoration. There’s no step-by-step instruction about how to make the paint shine or how to get the most out of the inline-6 engine underhood. Instead, the site offers links to where fans can purchase stencils and decals, and lists part numbers for the exact lights, winches, and other accessories.

“We’re later in the game. The earlier Jeeps really pioneered it,” Lechtenberg says. “There was a forum, and I looked at it every day, but it’s now Facebook.”

Penna says that he would like to have the correct front bumper-mounted fog lights, but merely used Jeep parts a few years ago now command upward of $450 because they’re no longer made, he says. He has classifieds alerts set for certain parts like the lights, just in case someone parting out an old Jeep wants to get rid of them.

Additionally, the Jeep Lechtenberg chose for her model—No. 10, the one driven by game warden Robert Muldoon with paleobotanist Dr. Ellie Sattler riding shotgun—didn’t have a roll bar in the film.

“Unless it becomes a (Comic) Con car , I’m not going to be that authentic,” she says. At that point, she would stop driving her Jeep regularly. For now, she says she likes the attention she gets.

“I work downtown, and sometimes I’ll have someone follow me for an entire block asking questions,” she says.

More than a film car

Compared to the other famous car in “Jurassic Park”—the bright yellow, green, and red-painted Ford Explorers that eventually draw the attention of Tyrannosaurus rex—the Jeeps are relatively easy to build. The Explorers had a custom dashboard and their tops were removed in favor of a glass panel that offered perhaps too good of a view of impending doom.

The Jeeps seem like an obvious choice, then, as even a basic repaint turns them into something eye-catching.

Neither Lechtenberg nor Penna is a traditional Jeep enthusiast. They don’t go rock-crawling or mudding, and they note that their Jeeps can draw scorn at car shows.

“They’re ‘Wronglers,’” Lechtenberg says. The YJ-body Wrangler sold between 1987 and 1995 was the only open-top Jeep with square headlights, a design that linked them to the Cherokee and Wagoneer models when they were new, but never made them many fans.

That doesn’t matter to these two Denver-area buffs, however. Their Jeeps have made plenty of memories already. Lechtenberg was asked to drive a 10-year-old dinosaur buff around Red Rocks Park, which looks as Jurassic as anywhere in North America, for his birthday. Both take their Jeeps to Children’s Hospital Colorado annually with other movie cars to cheer up patients.

Penna even drove his 1,600 miles roundtrip to a celebratory premiere of the latest “Jurassic World” film at the IMAX theater in Branson, Missouri.

For “Jurassic Park” Motor Pool members, the Jeep build is just part of a game that’s been millions of years in the making.

Follow along with us as we explore what Jeep means and how an icon changed the world.