Electric motors can do amazing things. Ramp them up to four-figure horsepower, and they can make an electric car intimidating. Heck, we'd even call this electric Audi RS 3 frightening.

Schaeffler Group's 4ePerformance concept is back. We've seen it fly backwards at ridiculous speeds, and now Dan Prosser, a contributing Autocar journalist, posted a video of the electric sedan's ability to do terrifyingly entertaining four-wheel donuts. Some may know them as "cyclones," which refers to an all-wheel-drive car doing its best interpretation of a donut—a shenanigan usually reserved for rear-wheel drive cars.

I have seen the future of the donut (four-wheel type...). pic.twitter.com/6JB2HK15kx

The video shows the 4ePerformance concept doing a four-wheel donut on command. In an instant, the electric car spins in circles amid a tire-burning smoke show. Prosser explained that on one side the wheels spin forward, while on the other side they spin backward. 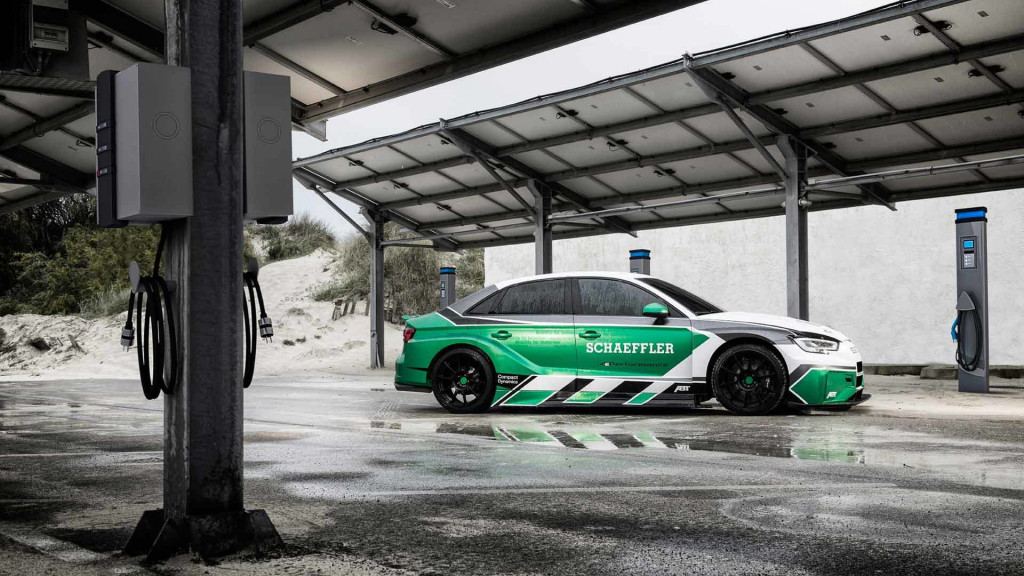 Schaeffler's RS 3-based electric concept employs four Formula E electric motors that each produce roughly 295 horsepower. Total output is around 1,180 hp. A spur gear unit connects each motor to one of the wheels while two motors share one gearbox housing. Thus, it forms an electric twin axle that can selectively send drive torque to an individual wheel. We call that torque vectoring.

The four-wheel donut shows how effective the system is and how precisely it can vector torque.

Schaeffler's mad experiment isn't meant for production, but the company does think it could preview a future business model. Eventually, Schaeffler could develop off-the-shelf performance-oriented electric powertrains for automakers.

Nobody has to force our hand to love a 1,180-hp sedan with four-wheel donut capability. We're A-OK with that outlook, Schaeffler.